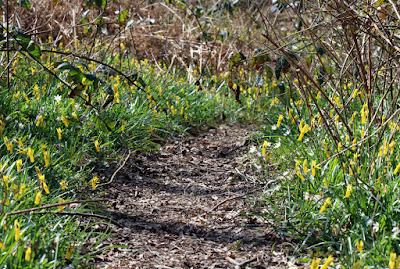 There's something rather special in a non descript small wood near Cranbrook, called Hilly Wood. For at least 70 years there has been a naturalised colony of Cyclamen Daffodils with their unique swept back sepals. With my own garden Daffs beginning to wither (after starting to flower in late December) I wondered if I had left a visit too late. We eventually arrived and after a bit of a muddy walk down hill we came to the area where they grow. As we rounded a bend thousands of these peculiar Daffodils carpeted the woodland floor. These originate from Western Spain and Portugal, where apparently they are now endagered in the wild. Here's a photo showing the swept back petals. Simply beautiful in such numbers. Narcissus cyclaminius In places the ground was carpeted with these lovely red catkins. I've not noticed them before, but they came off a tree over 20m tall. I later looked them up and they are from a Hybrid Black
2 comments
Read more 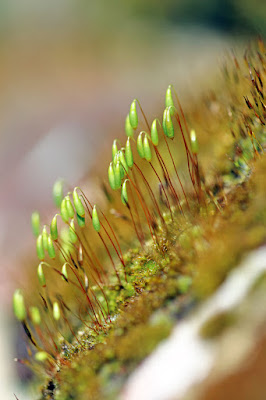 Ancient stone buildings are always worth a good look at for botanical finds though it's a bit early yet for most. However, with an early Easter holiday, we headed out for Scotney Castle, a beautiful National Trust property with many botanical interests, both wild and cultivated. However, that was not to be as the traffic jams were so bad we diverted to NT Ightam Mote instead. This was also packed but at least we got a spot in the main car park. Later on, people had to park a long way up the approach road. As we walked down the path to the old house, we had a good look on the walls surrounding it. I could make out Rue leaved Saxifrage rosettes, but it was too early for flowers.  I did find some attractive mosses though. Thanks to my Twitter followers for the IDs.  Bryum capillare Tortula muralis While very interesting, nothing on the walls was flowering, so we headed up around the grounds to see what we could find. First up was the
2 comments
Read more
More posts