- April 17, 2016
It had been raining hard for a few days, so when we planned a morning walk we didn't fancy anywhere muddy. This ruled out most of Kent at this time! So we drove off to the Isle of Grain, a small country park on the North Kent coast on a promonotory of land between the tidal Thames and Medway. This has a nice level path along the sea wall with no mud at all! 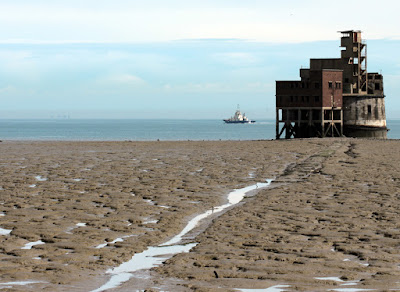 There are extensive mud flats, some salt marsh, 2 sea walls and a mix of fresh and saline ditches behind it, so there is a variety of different habitats.


However, it was the sea wall we were interested in today, for species which show in early Spring then disappear until next year. 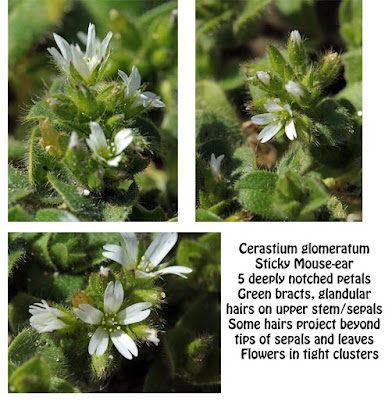 First up was Sticky Mouse-ear. It's actually quite common, but easily overlooked or mistaken for Common Mouse-ear.

This tended to grow on the top of the higher sea wall, away from the salt spray of a high tide. 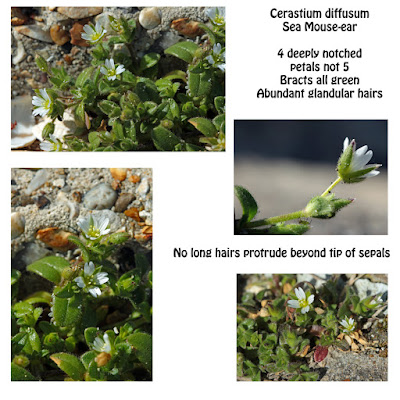 It wasn't long before I found my first Sea Mouse-ear, substantially smaller and mostly in the spray zone or just above it.

You can see small cockle shells in the photo washed up from a storm. 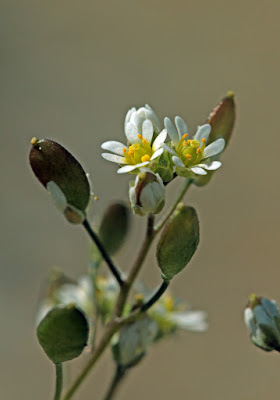 Then I found a very common flower at this time of the year, a Common Whitlowgrass. Most people have no idea about them, as on average they are about 3-4" tall. The flowers are less than 5mm wide for the most part.

You can see it's already going to seed, soon to disappear. It's found on pavements, walls, waste ground, anywhere the soil is thin and poor so other species can't take over and drown out such a little plant. 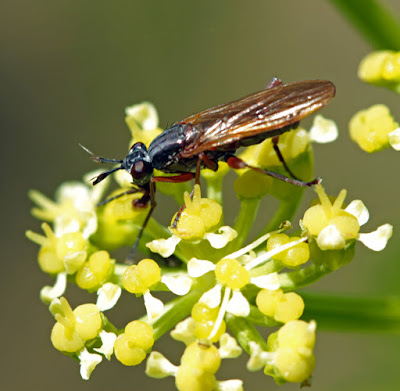 Alexanders is a bit of a nuisance as it spreads like wildfire, but it is an important source of food for insects and most plants will have several inects on them. 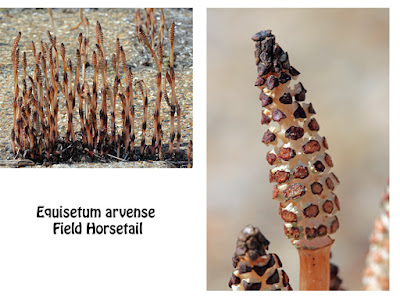 Field Horsetail can be a pest in gardens and towns, it's fronds (it's a fern) can even break through tarmac and lift paving slabs.

Here there were 20 metres or so of them growing out of the sea wall. These are there means of reproduction, the leaves will come up later, like a green horses tail! 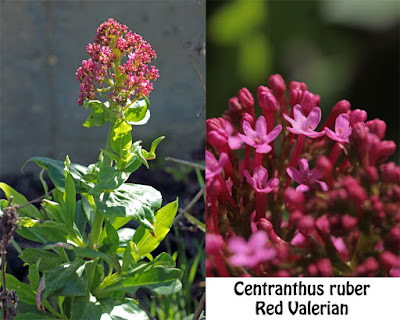 Near the power station outflow was a stand of Red Valerian, a quite showy flower, but very hardy and it can dominate some areas extensively, such as Dungeness in Kent.

Flowers can be red, pink or white. 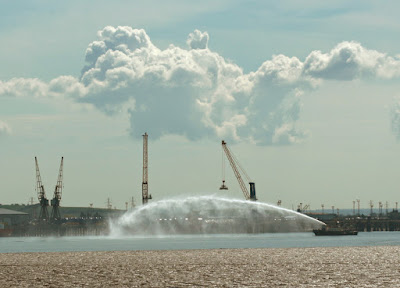 Here you can look across to Sheerness Docks on the Isle of Sheppey. I guess this tug was practising firefighting? 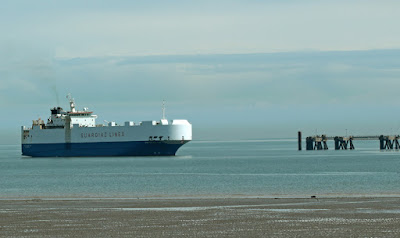 It must be quite a deep water channel in the Medway as this large ship came up and docked at sheerness at low tide. 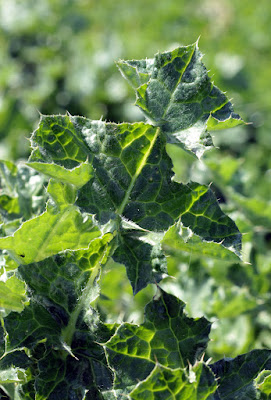 On the back-side of the sea wall is the usual grassed bund. Growing in this were a few stands of Milk Thistle, an arable escape from years ago.

These are the only thistle to have visible obvious veins on the top surface of the leaves.

It's way too early for flowers, but it was interesting to find one in a maritime setting, instead of the usual arable one. 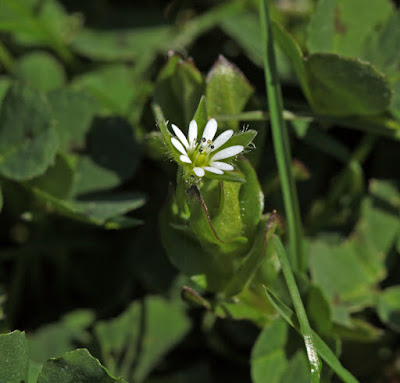 We walked back along the grass to see what we might find. Common Chickweed was very numerous in the longer grass areas, some had over 100 flowers out now over several yards. 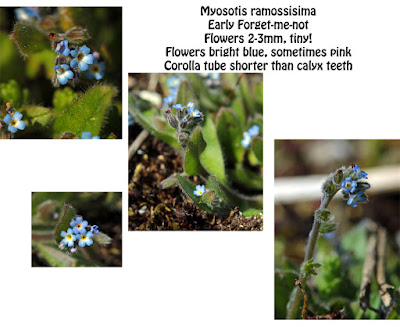 This is the Early Forget-Me-Not, relatively easy to identify as it flowers early and the petals are very tiny!

The more common garden escape of Forget-Me-Not flowering now has much bigger flowers. 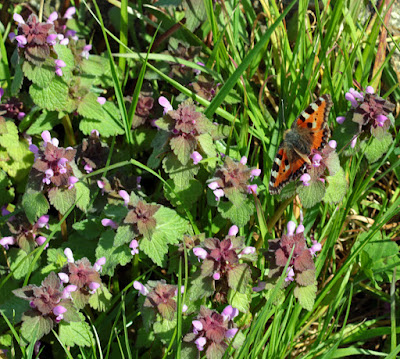 I spotted a couple of Peacock and Small Tortoiseshell butterflies. Unfortunately they didn't settle long enough for decent photography.

I did notice that the Small Tortoiseshells only fed from Red Dead-Nettles and no other flower in the area.

This shows how important a common "weed" can be to the food chain. 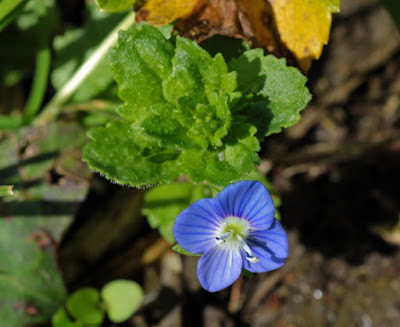 The final flower of note was the first Germander Speedwell I've seen this year. They look much like Common Field Speedwell but these have 2 lines of paralell hairs up the leaf stems and bright azure blue flowers that are a bit bigger than the other species. 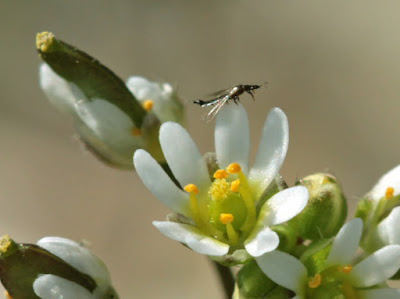 This is the Common Whitlowgrass from earlier. However, when I looked closely I saw what I thought was a tiny beetle on a petal. These petals are 0.5-1mm wide so you can see it was very small.

It turns out to be a species of Thrips, something I'd not heard of, but gardners and farmers really don't like. They can reach high numbers and decimate crops and flowers. I expect Ladybirds will eat them if they can though!

That was about it for this before work walk. It was a beautiful warm sunny Spring day and lovely to be out. It was a shame that since then it's rained every day and now turned very cold to boot!