It's been a drab, cold time of the year, no surprise really, being Winter! However, the end of 2015 was exceptionally mild and wherever I went I always found some wildflowers. Not so a year later.
Parts of December 2016 were very cold and in North Kent we had several hard frosts down to -5 Celsius. Worse (for wildflowers) was that these temperatures coincided with thick freezing fog, meaning that layers of ice crystals decimated the less hardy flowers still out. 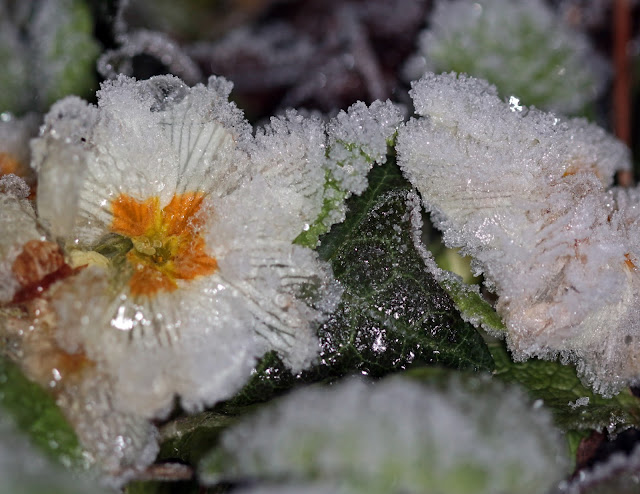 Anyway, back to the first day of 2017.
The Botanical Society of Britain and Ireland (BSBI) now organise a wildflower "hunt" from 1st to 4th January each year. Data is put into a database and observations can be drawn from the results.
For full details go to:
http://bsbi.org/new-year-plant-hunt
It really is quite fun to do and gives me a purpose to go general recording at a time of the year when it's all too easy to sit in front of the TV watching the same old films and shows. The main difference to general recording is that the plant must be in flower, all else are discarded.

The photo above shows a garden Primrose, taken at 10pm in thick freezing fog. This was taken just before the New Year but wouldn't have counted anyway as it was planted. Only native or naturalised wildflowers count in the hunt.

The following is what I found flowering today. For the trip I decided to visit an industrialised/semi urban/semi countryside area of Swanscombe Marshes in North Kent, bordered to the North by the tidal River Thames.

So that I don't miss any, I'll post them in alphabetical order (scientific names) rather than the order I found them in. There were two main habitats to explore:
the first was a new road built across the marshes to a housing development. Turf had been laid on the road edges, but the banks were a blank canvass (left as dirt). As such, in the year or so since the road was built, seeds form the seedbank and those windblown have established and thrived in the new habitat;
the second habitat was the sea wall bordering a new housing estate and the River Thames. It seems to me that the harsher the environment in the Winter, the more likely I am to find flowers. Nature Reserves are often barren of wildflowers now, but brownfield sites have plenty!

First up was Yarrow. This is found everywhere from lawns to pavement cracks, field edges to meadows. It often flowers all through the Winter so it was not a surprise to find it in several locations today. 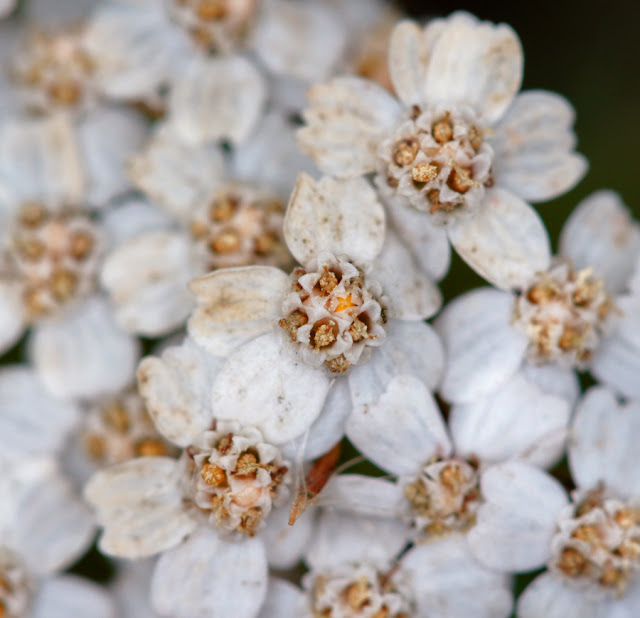 Along the road verges were numerous Common Oraches, a bland, petal-less species, common in waste ground and fallow fields. Atriplex can be tricky to identify, so always check the basal leaves and get a hand lens out to check the tiny achenes in the flower heads. 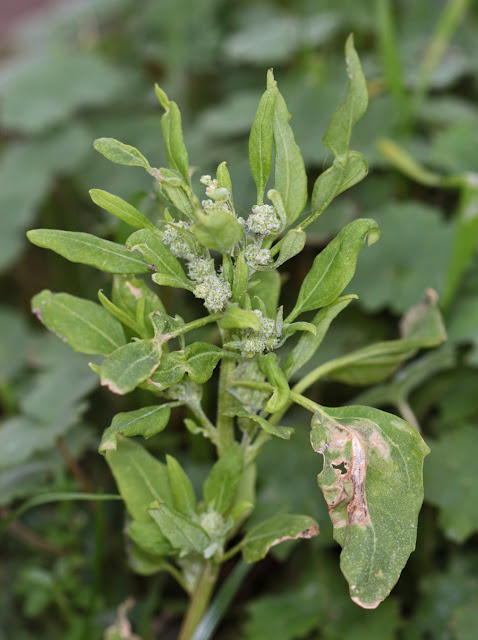 Spear-leaved Orache was also common, an easier one to identify, though some Common Oraches can have spear like leaves!

There are three species of Fleabane that look very similar to each other, all imported alien plants. Canadian Fleabane is still the most common to find here, and it's pictured below. However, check details of the flowers and plant to determine whether it could be Bilbao or Guernsey Fleabane, all look superficially similar!
I found loads of Canadian Fleabane here, but all had gone to seed. However, by the Thames along a wall I found some late flowering plants, maybe protected from the frosts by the salty air and adjacent wall? 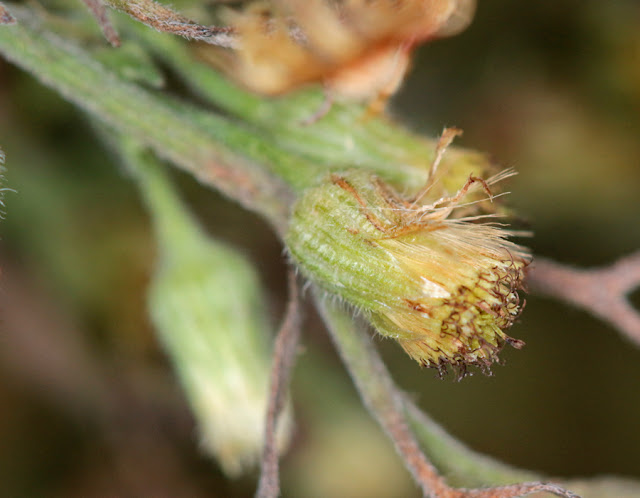 It can be very easy to overlook the obvious. I was concentrating at ground level and walked straight past these flowering male catkins of the Hazel tree. I only saw them on the way back to the car! I've seen photos of the small red female flowers out in Western areas of the UK, but i couldn't find any here yet. 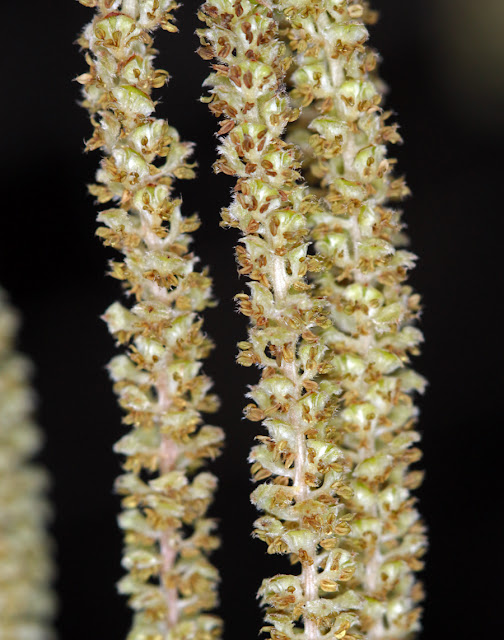 In the rougher areas of rank grasses were plenty of Wild Carrot seed heads. They are very distinctive, as they curl up into a tight ball of seeds. However, look closer and you may find a fresh flowering shoot coming out of the base of the old, apparently dead, stem. Just like I did here. 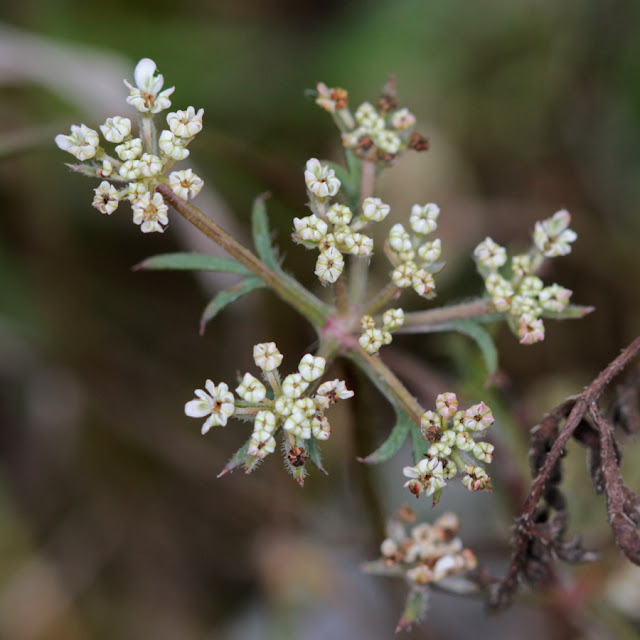 White Dead-Nettles flower all year long. Frosts and snow will kill the flowers off but once it turns milder they pop back up again within a week or so. Sure enough, I found a patch flowering. Not the best photo, but I didn't fancy laying on the ground to get the perfect shot! Furthermore, it was raining by now. Unlike their namesakes (Stinging Nettle), Dead-Nettles have no sting at all. 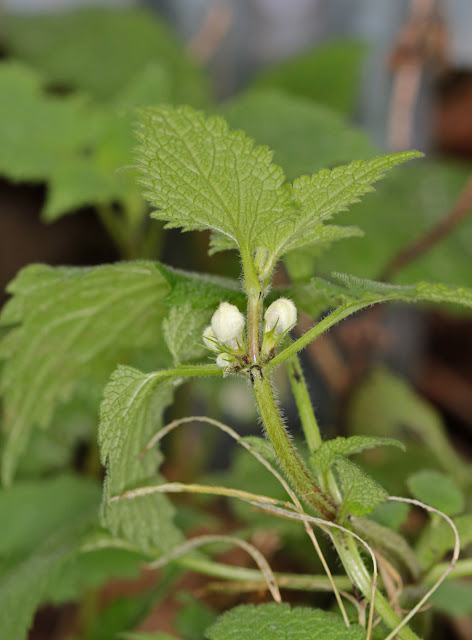 On a newly formed bank of earth near to newly built flats, I found a surprise Swine-Cress in flower. These are very common in arable fields and pavement cracks, and the new habitat mimicked a recently ploughed field I suppose. The surprise was finding it in flower! The flowers are incredibly tiny, just 2-3mm across and rarely have visible petals. 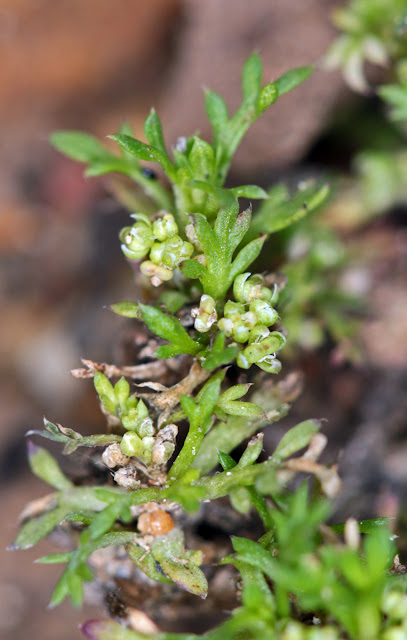 In the 2016 plant hunt I found numerous White Melilots in flower along an industrial road here. A year later, I found just the one, with a rather pathetic small raceme of flowers, but they all count!
By now, it was wet and windy, so I found it difficult to get a better photo than this one. 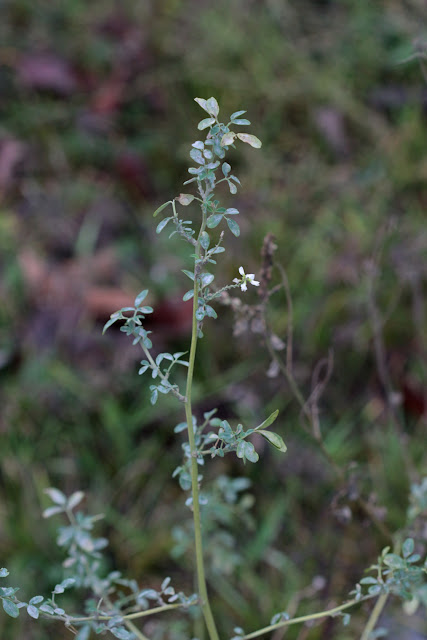 Next up was a very dull plant. It doesn't have petals, it's all pale green and can be found just about anywhere. It is of course, Annual Mercury, a pesky plant of gardens, fields, waste ground and towns, it does get everywhere. However, while it may appear dull and boring, it provides vital food for insects at this time of the year. I spotted several tiny flies on the florets. 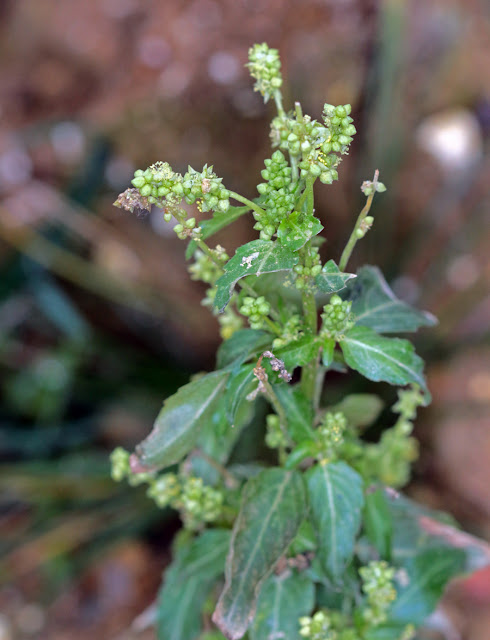 This was the first wildflower I spotted once I got out of my car, the abundant and mostly unwelcome Knotgrass. There are several subspecies not easy to tell apart, hence the term "agg" for aggregate. The flowers are less then 2-3 mm across. 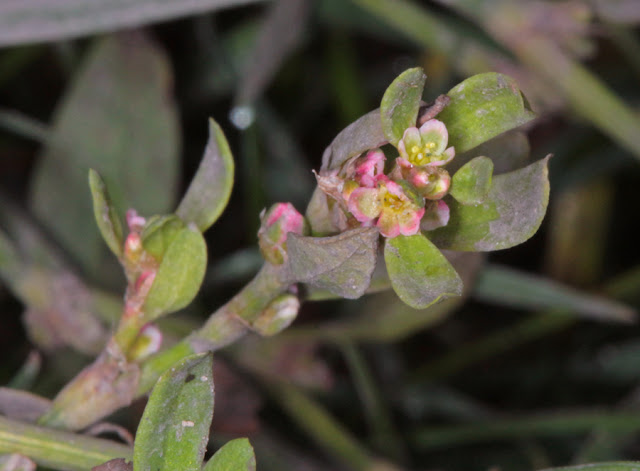 I've combined a few flowers now, which will help you to spot the differences between similar flowers. When I started my interest in botany just a few years ago, it became quickly apparent that certain families of plants were going to be problematic. One such family is the Dandelion look alike plants. There are Dandelions, Hawkweeds, Hawkbeards, Cats Ears and Mouse Ears and Sowthistles and numerous sub species and hybrids to contend with. As such it can daunting to try to identify them. However, some are relativly easy and common and after a while you don't even think about them being difficult anymore, so don't shy away from this group, pick out the easiest and expand your knowledge bit by bit from there.

Both of these two were growing along the sea wall (above the high tide line). 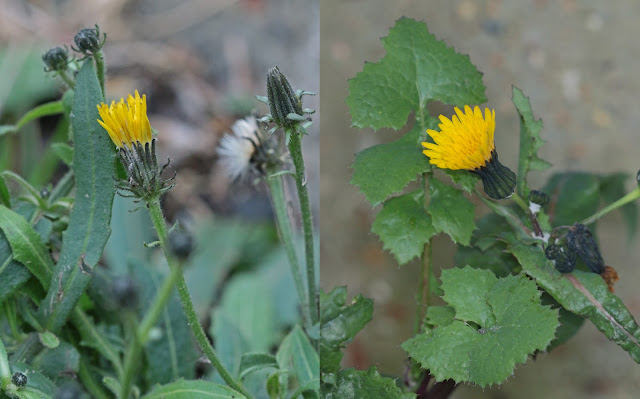 Ragworts are another potentially confusing group of plants, but thankfully, much easier than those above. I didn't find any Common Ragwort, but there were plenty of flowering plants of the two (alien) species below. They were most numerous along the road verges. 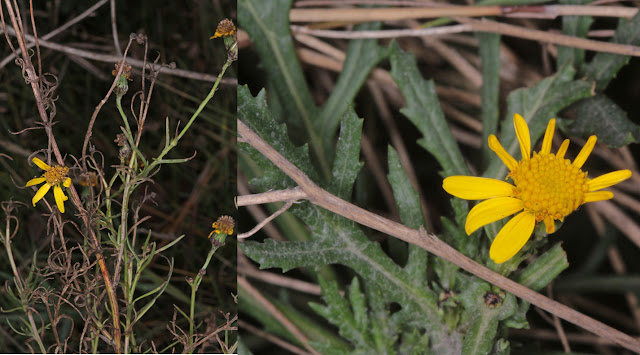 Another common plant found everywhere is Groundsel and here was no exception. 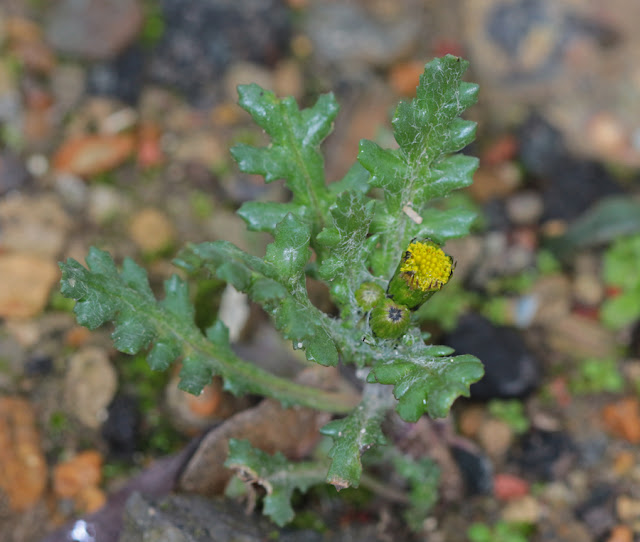 Hedge Mustard was common along the new road verge, it's long spindly but stiff branches and flattened seed pods distinctive. 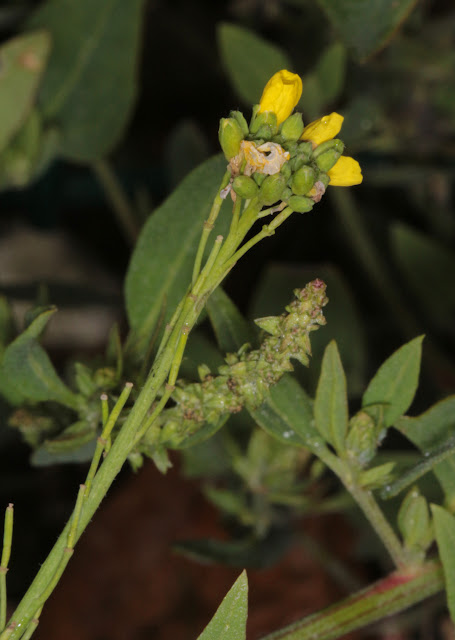 Along the sea wall, but away from the salt tides, were numerous patches of Common Chickweed, a very common plant in towns, gardens and fields. At standing up level I couldn't spot any flowers, so when I found a big clump, I got down low and found just 2 flowers out. Again, they are quite small flowers with tiny petals, so you need good eyes, or get down low to look if not (like me). 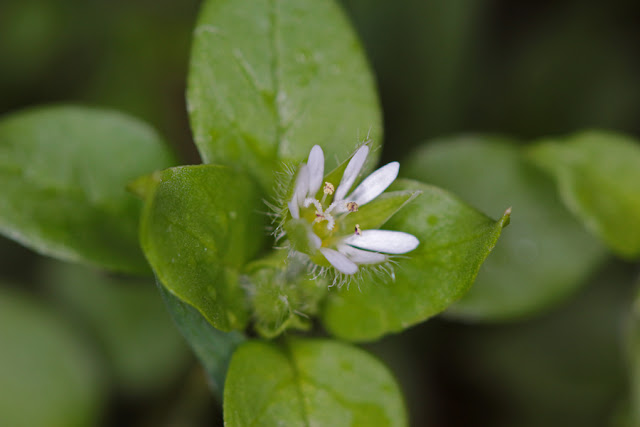 Scentless Mayweeds were numerous along the road verges, typical colonisers of new habitats and arable fields. 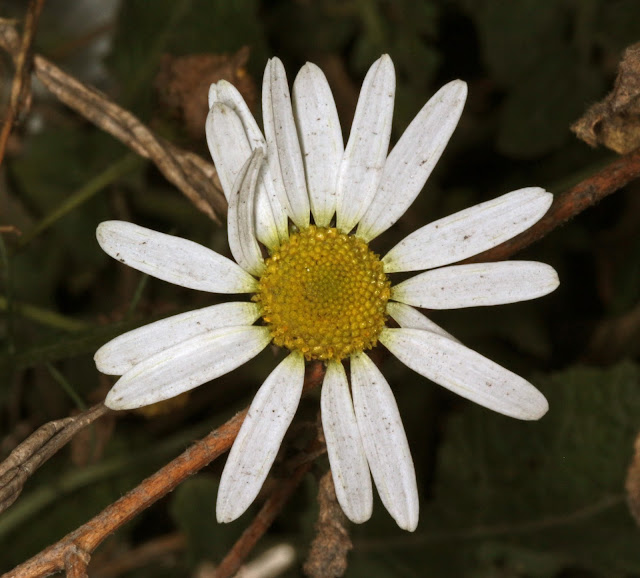 My final find of the day was a Common Field Speedwell, which unfortunately look very similar to the Green Field Speedwell. However, the seeds are different and I was fortunate enough to find not only the seeds but some flowering as well. The petals were not fully open due to the rain. 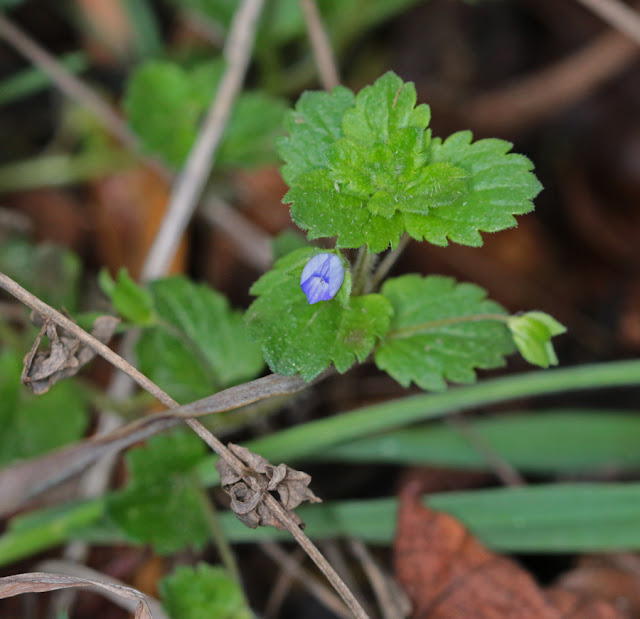 I think that tallies to 20 species in just 2 hours of searching. It's a good, fun excuse (if any were needed) to search for wildlife in our countryside in the depths of Winter. So why not get the family together and give it a go, there's still a few days left to do so.

A Happy New Year to All.
Dave
@Barbus59