Some Kent Botanical Highlights from 2017

Form March to December I am usually out photographing and recording what I find all around Kent. It's unsurprising then that from time to time I find some rare, interesting or just beautiful wildflowers along the way.

Here's just a few of the thousands I have seen and recorded this year. They are not presented in any particular order either.

First up is the amazing Malling Toadflax. A visit to the West Malling area to find general records meant I had to have a look on the old town walls where this plant has been naturalised for well over 100 years. It's still there looking good. 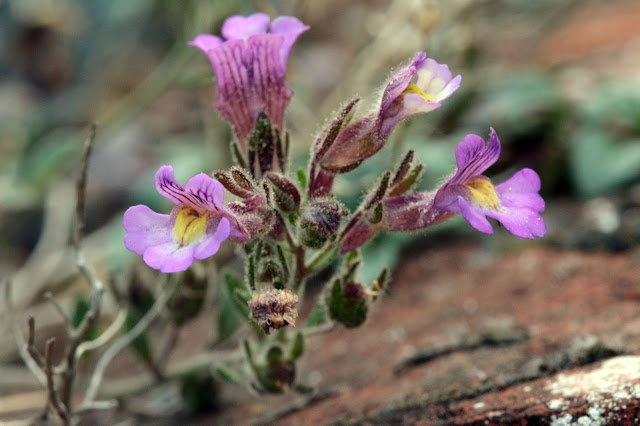 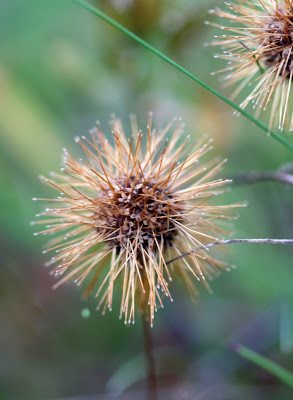 A new plant that I'd never seen before was Piri Piri Bur found in substantual numbers in woodland  near Mereworth.

It's still there and attaches its clingy seeds to ones boots and socks most efficiently and annoyingly. 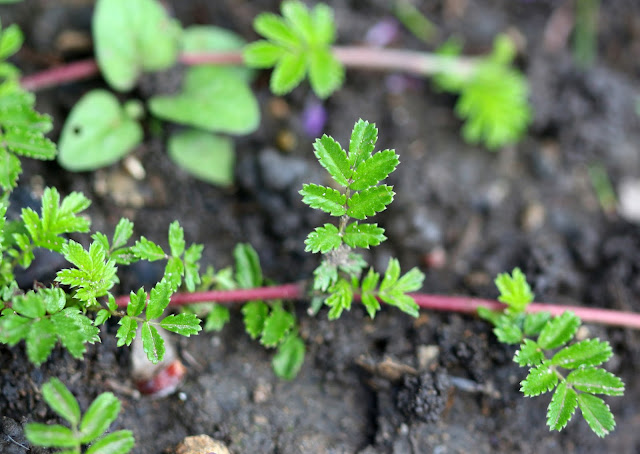 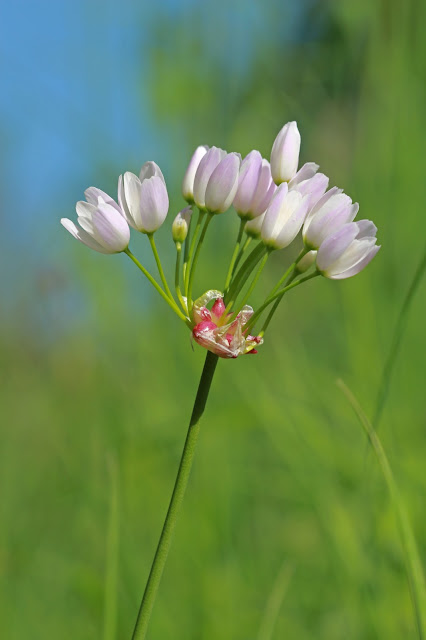 Rosy Garlic is a plant I've previously only found in coastal areas, yet in  May I found it not a mile from my house on a road verge at Fawkham Church. Not obviously planted and I didn't see it there in the previous years I had visited the area. 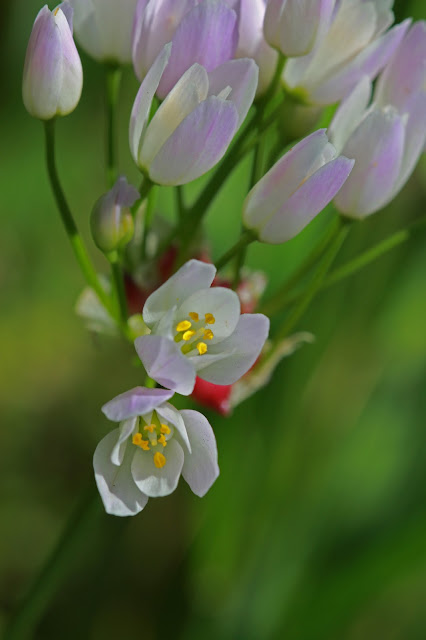 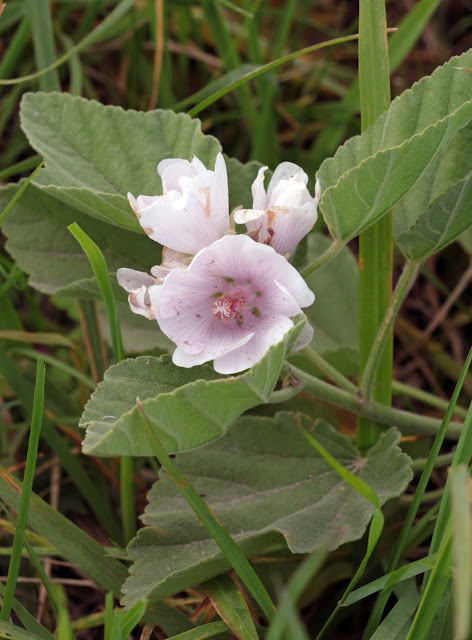 Marsh Mallow is a Kent RPR species which I've only seen on the Romney Marsh and at nearby Rye Harbour nature reserve.

So I was very surprised to find a new colony in a damp tractor track, well inland at Chapel Hill, South of Tenterden.

A recording visit to Sole Street, a small village just South of Gravesend provided numerous records and a tremendous amount of chalk loving plant species were found in the railway statuon car park. A big surprise was my first ever sighting of Catmint, a Kent RPR species. 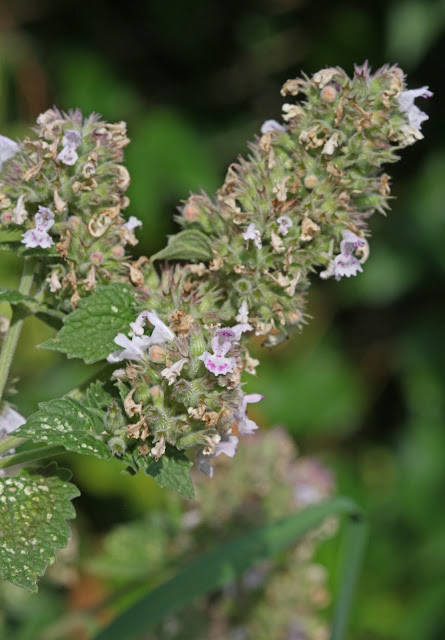 Just off the car park was an arable field containing this beautiful variant of Scarlet Pimpernel. 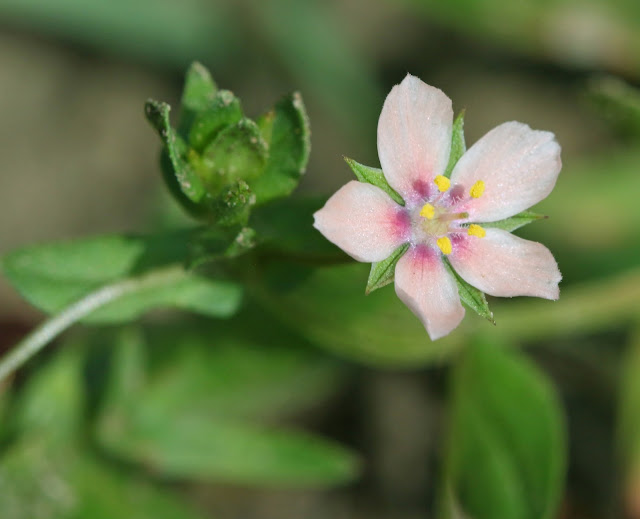 Snap Dragons are usually associated with gardens and children picking a flower and making the "jaw" open and close
(yes, I did that too when I was young).
However, the ones below were found on a beach comprising of large chunks of fresh chalk from cliff falls.
They are very good at colonising new ground. 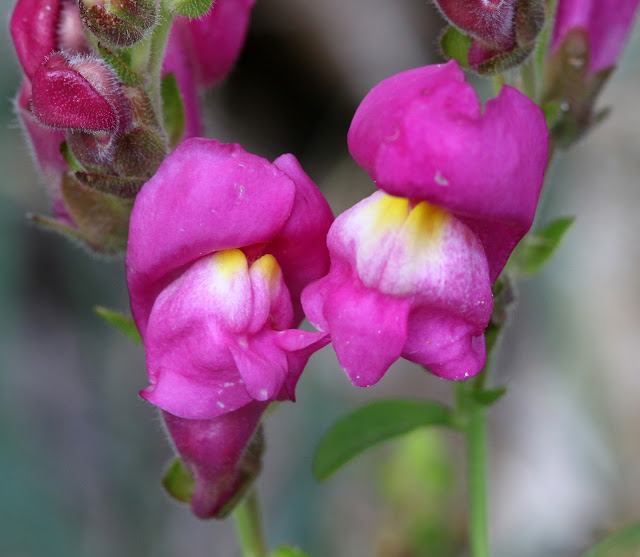 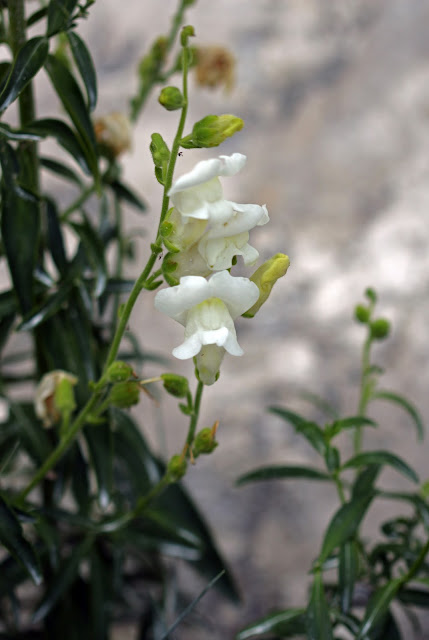 Like the garden varieties they come in a number of colour forms.


Another site I saw these in flower was at Rochester Castle, both in the walls near the base of the castle and growing out of the very highest top of it as wall.

Euphorbias are another plant group with numerous species escaping into the wild. The two most common that I've seen in Kent are pictured below. 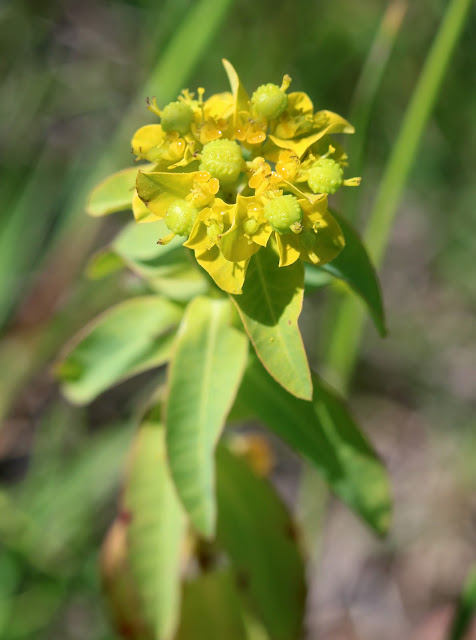 Balkan Spurge is common along road verges and laybys. It's easily identified in that it is the only Spurge with opposite leaves.

This one was found in a layby off the A249 near Detling.

The other common garden escape is Twiggy Spurge. This one was found by a rural track near Longfield hill. 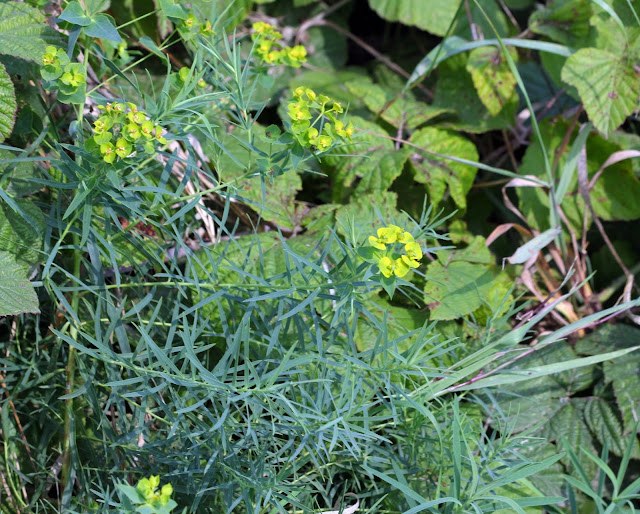 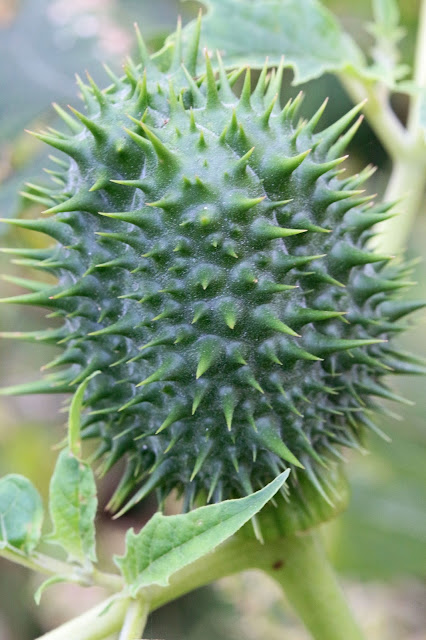 I'd not seen Thorn Apple in the wild prior to 2017, however, I found it twice that year one in a layby the other in woodland but probably from fly tipped material.


In case you are wondering, the spines are hard and sharp! 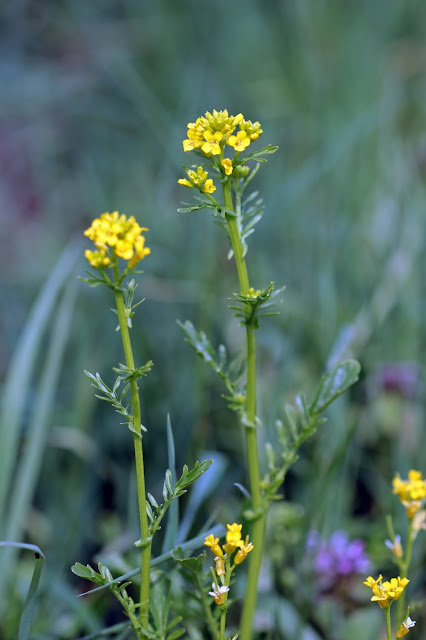 This is Wintercress, an attractive crucifer.

Found on Dartford Heath on a road verge. 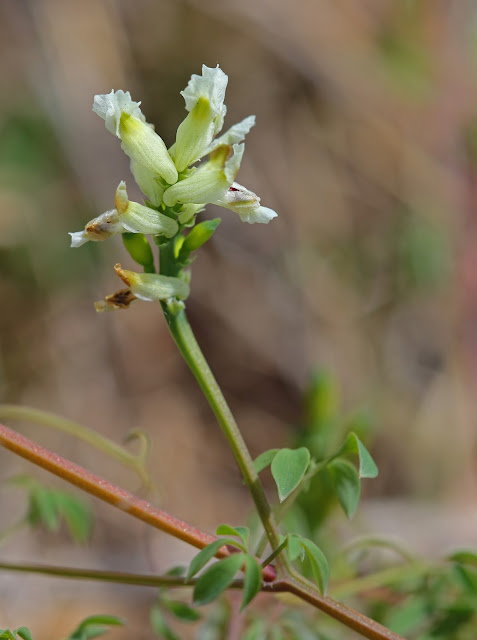 This Climbing Corydalis was  found in a heavily recorded area on Hothfield Heath near Ashford. While it had previously been recorded nearby this was a first record for this monad (1km x 1km OS map square). 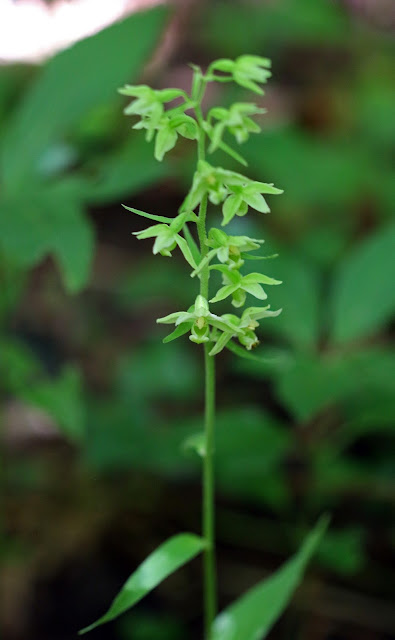 Both flowers, sepals and stem would usually be tinged purple.

This variant is rarely found and is not named in Harrap's Wild Orchids.

So I called it var. viridiflora as Broad leaved Helleborines are called this when lacking pigments.

Update: It's correct name is:
Epipactis purpurata var. chlorophylla
as advised by my County Recorder, a rare variant in Kent. It has only been found once in Kent in 2009 and not seen since. 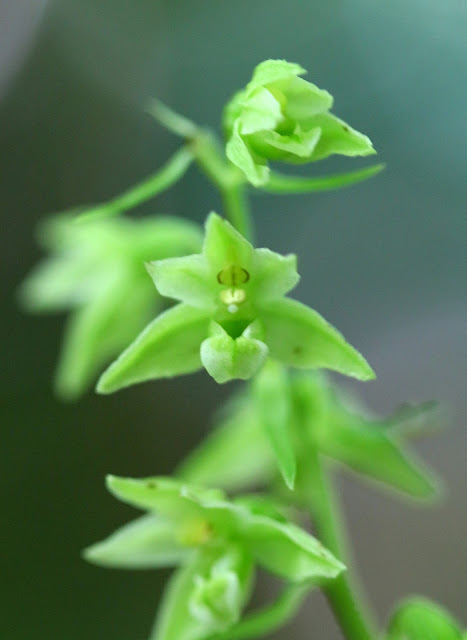 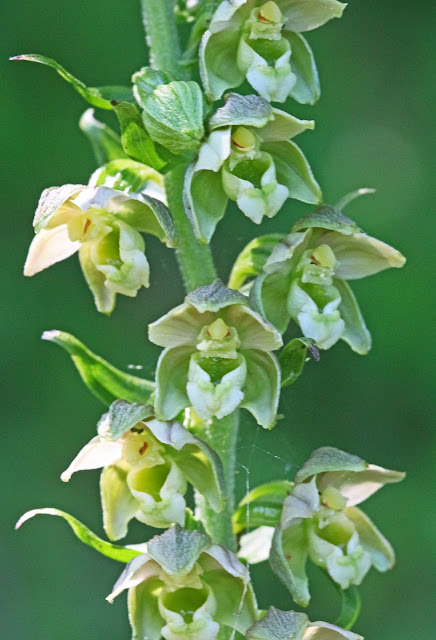 This is a Broad-Leaved Helleborine variant, sometimes treated as var. viridiflora. It  is an unusual variety of this orchid which lacks anthocyanin pigment, so that the normal purple tinge to the plant is missing.

This was a single variant among hundreds of ordinary coloured flowers at Dry Hill Sundridge, Kent on 17/07/17


These beautiful but small flowers are Malcomia, another garden escape that I found at Speldhurst and at Bluewater. I suspect they will spread substantially in the coming years. 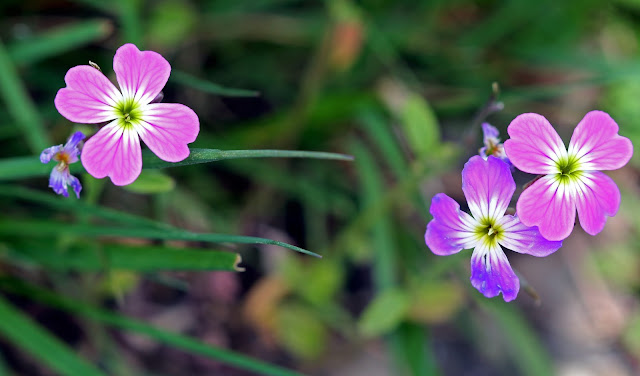 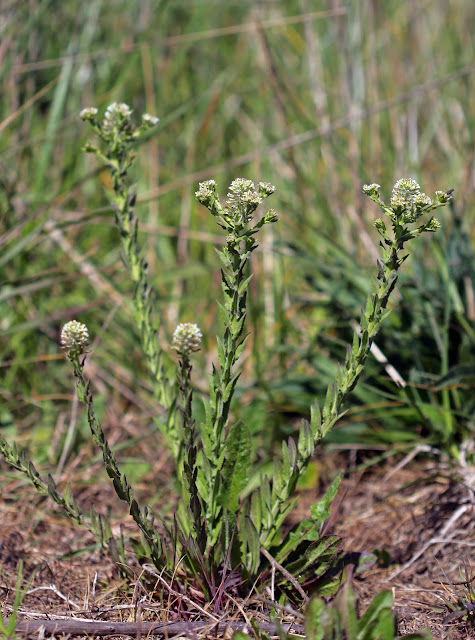 Field Pepperwort is another rare plant on the Kent RPR and is found in coastal areas.

Here it is doing fine on arable field edges near St Margarets at Cliffe. 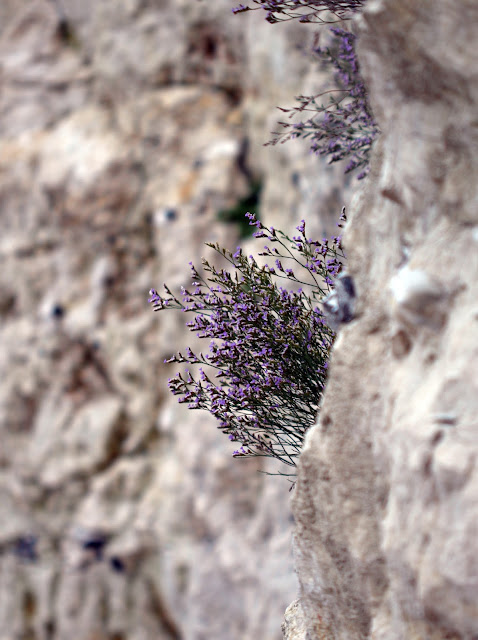 
It's rare in Kent with Common Sea Lavender being dominant in the county. The latter branches above the middle, the former near the base.


I've since found it at several places along the SE coast.

Talking of old records!
I made the long walk to visit TQ7979 where St Mary's Marshes meets the River Thames. I guess because of the long walk, the last and only record here was Sea Sandwort in the 1950s. Well I was very pleased to re-find it in 2017. Sea Sandwort is not common in saltmarsh areas, but this part of the Thames had a large amount of shellgrit washed up above the mud and estuary grass. Sea Sandwort grew in this and obviously has done so for many years. 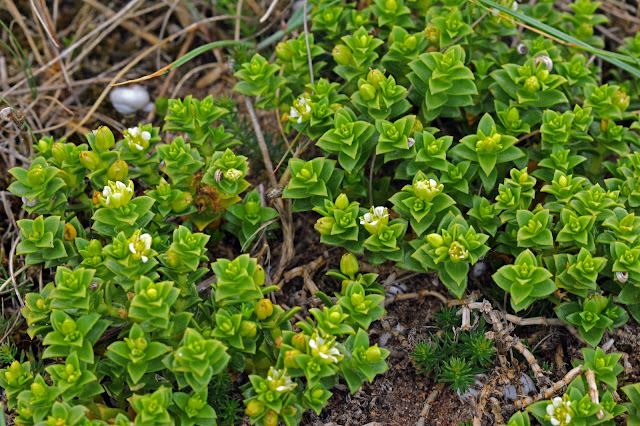 A walk along the cliff path between Herne Bay and Bishopstone led to me finding these bright metallic blue flowers of Sand Lucerne. I think this plant is often mis-recorded as Lucerne, but the latter only comes in a dark blue flower form and certainly not metallic colours.
The seeds also tell them apart with Lucerne having 2-4 spirals in the pod and Sand Lucerne lucky to make 1 1/2 spirals. 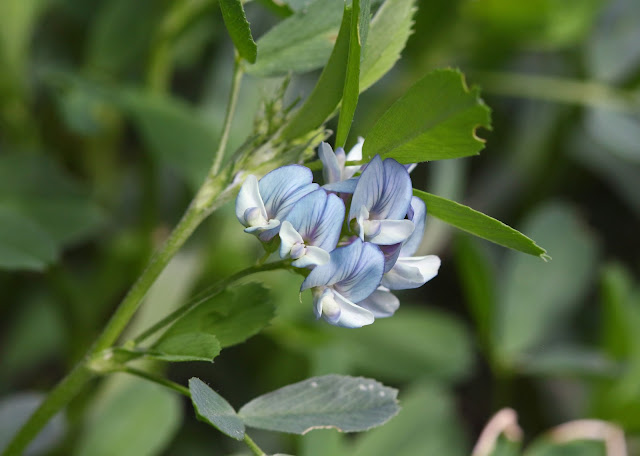 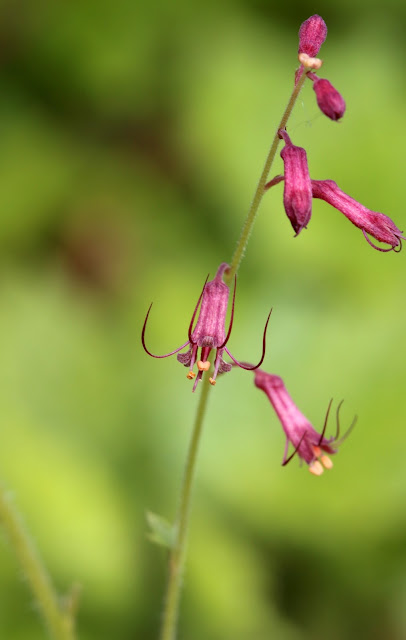 In newly coppiced woodland off the A249 near Yelsted I found a large colony of these Pick-a-back plants, another garden escape.

I had no idea what they were when I found them, but worked it out from the photos when back at home later.

I was very pleased to find that this find was a first record for this species in VC15 East Kent. This find is featured in the upcomg Kent Botany 2017 which can be viewed soon at http://bsbi.org/kent


Salsify is the purple form of Goatsbeard and is a separate species. I'd only ever seen it at Rye Harbour before but this last year I've seen it in several Kent locations. There were numerous flowering plants along the A228 near hoo. It's quite spectacular to see but closes its flowers each day by around mid-day. 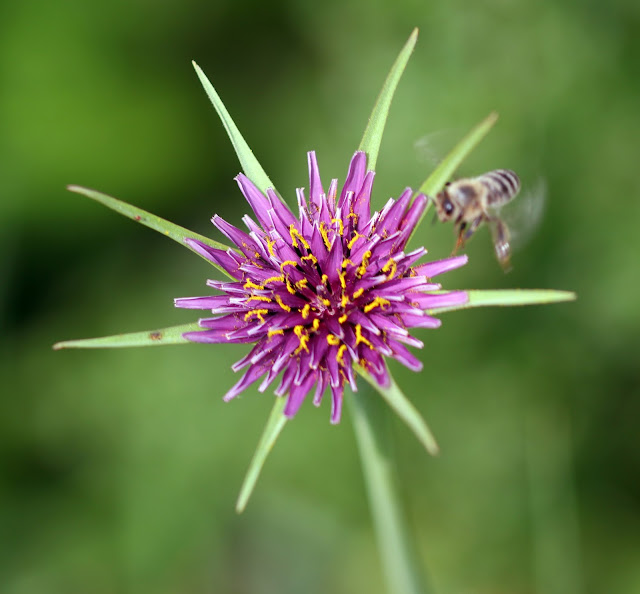 This little pink plant had me baffled for a while. it's quite obviously a Persicaria but not a wild one. it turned out to be Pink Persicaria, another garden escape. This was found growing in a crack on a wall and the tarmac by Hartley post office, Longfield. It's since been obliterated by weedkillers. 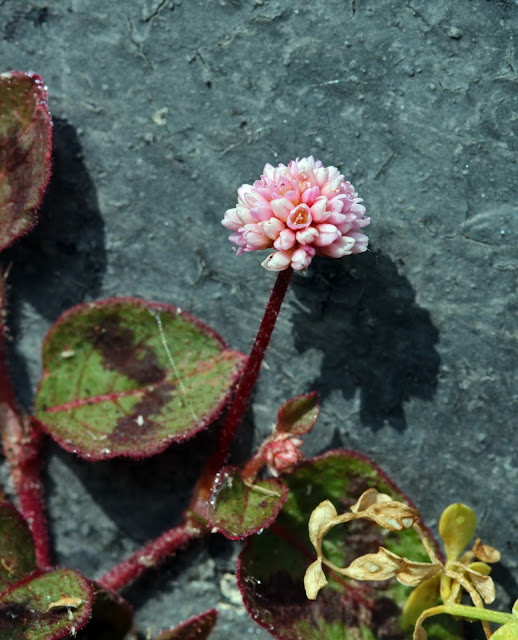 My final plant reviewed here is anothr alien, but this time not from the garden trade. This is Bean Broomrape, a seed contaminant of Broad Beans from Europe that farmers do not want here at all. However, it was imported by accident a few years back and appeared in the Birling area near Snodland in two places. I re-found it in both places and added a third monad nearby. Thus it's not only surviving but slowly spreading. There were no legumes for it to parasitise here and it appeared to be growing off Hogweed. 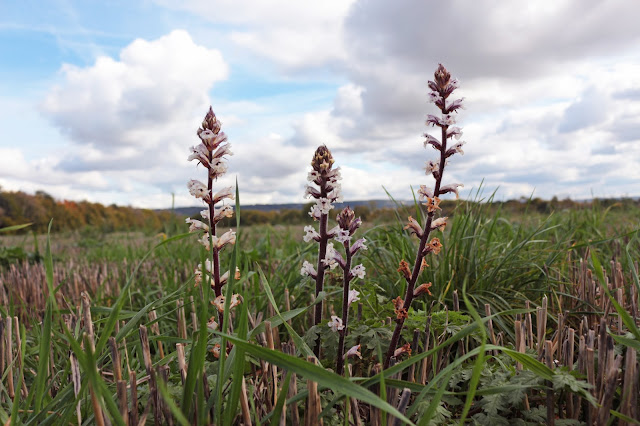 I hope you enjoyed the selection of records I had found in 2017, I could have easily included around 100 in total!  My next blog will feature my finds for the New Year Plant Hunt run by the BSBI.