- February 25, 2018
Although Spring seemed to be in the air, it was still quite cold, though nowhere near as cold as at the time of writing (25/02/18) where we have bitter Easterly winds setting in.

I'm getting quite practiced now at identifying plants to record them when they have no flowers, so I thought I'd have a stroll along the River Darent, a chalk stream near Farningham. 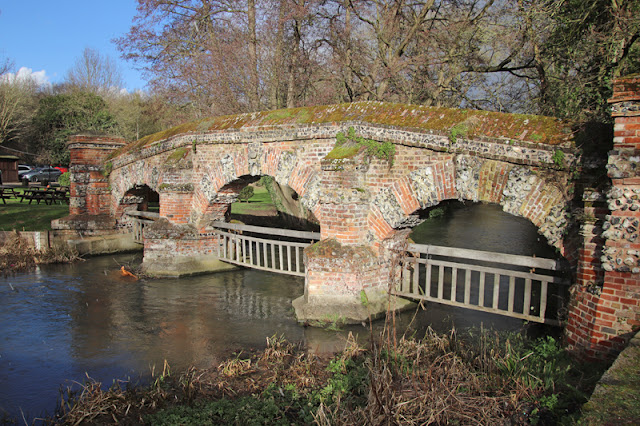 I found numerous species around this bridge, including Lesser Water Parsnip, Fool's Watercress, Pellitory of the Wall and Hartstongue fern.

However this isn't a bridge, but an elaborate cattle fence to stop cattle going along the river when crossing it. Apparently it was built over 100 years ago to impress upon others how wealthy the landowner was.

I journeyed downstream, first passing through the gardens of the Lion pub through which the Darent Valley footpath goes. As is often the case, there were numerous stands of Snowdrops close to habitation. It's not unusual for these to spread into the wild from gardens and churchyards and here was no exception. For around 50 yards downstream, well into the wild were hundreds of Snowdrops.

Of course, these flowers droop down, as if permanently depressed, face down to the ground. But if you take the time to get down low and have a look inside one, you get an insect eye view of the flower. Quite unusually, these ones were "Flore pleno" a double flowered form, quite impossible to see from standing height. 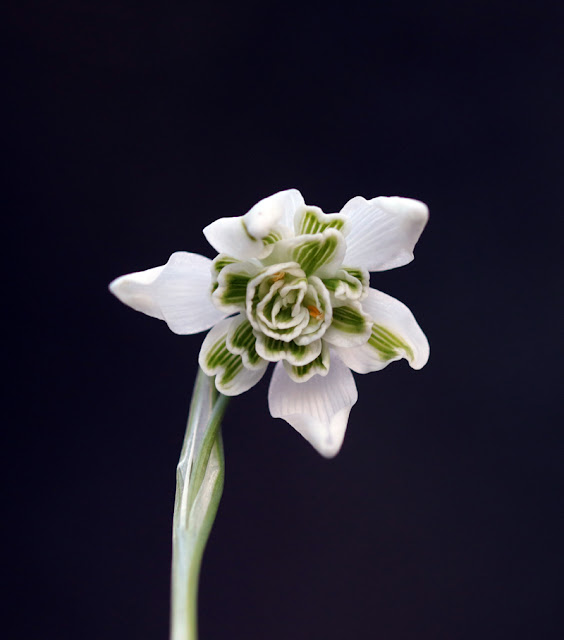 
I was pleasantly surprised at how well this photo came out, considering I was almost laying on the muddy ground, the light was poor from an impending hailstorm and it was quite breezy!
On a nice sunny day, the petals tend to get bleached out by the bright conditions, so a dull day isn't always bad!


By the river's edge were the skeletal remains of a large umbellifer. It looked a bit like a dead Hogweed, however, I could still see the big inflated sheaths around the leaf joins and these small seeds in an umbellifer head gave it away as Angelica. A lover of damp areas, it was no surprise to find it by the river's edge. 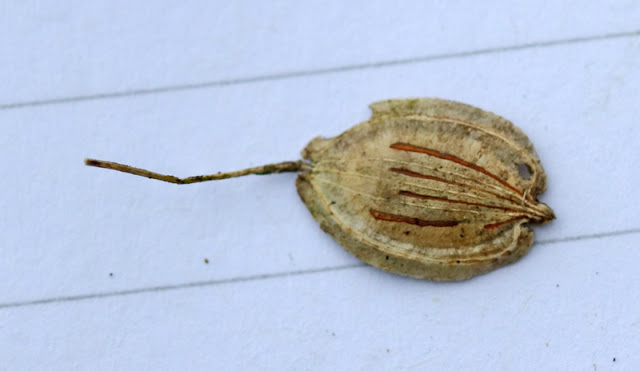 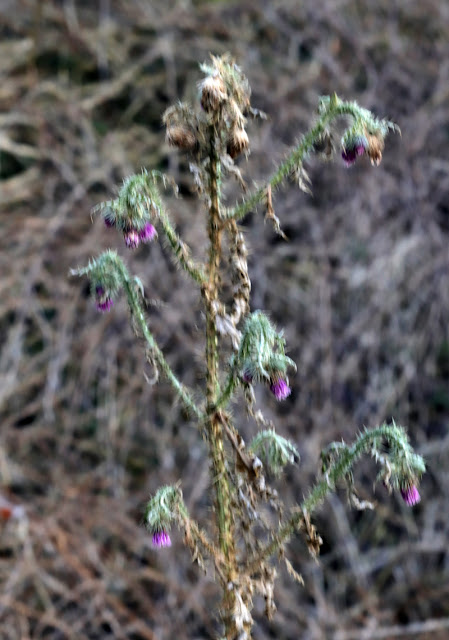 A rather blurred photo of a surprise Marsh Thistle in flower, again by the river, though looking in rather a sorry state. An impending hailstorm had picked up the chilly breeze!

It's an evolutionary trait I think, that certain plants put their final energy into producing flowers to set another lot of seed before finally giving up. 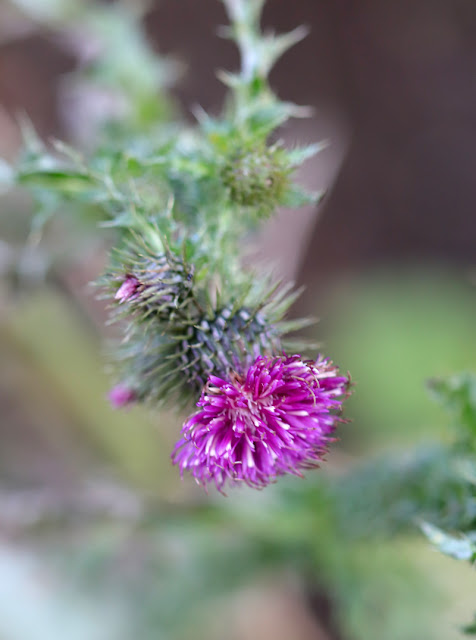 A macro shot of one of the flowers shows it can still provide valuable Winter sustenance for any pollinators still flying in the cold months.

Some ferns caught my eye. I must admit I find they all look rather similar and it can be time consuming to work out which species I'm looking at. 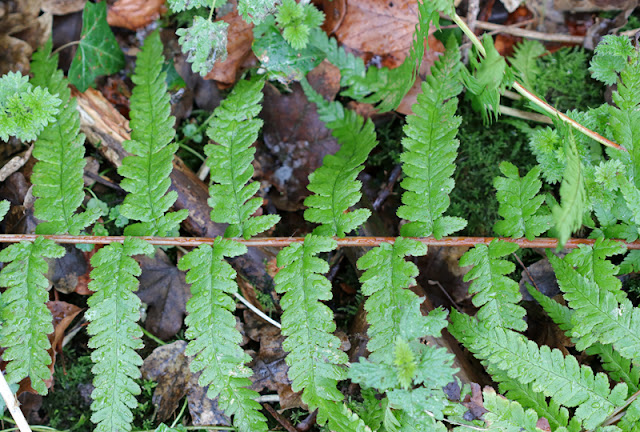 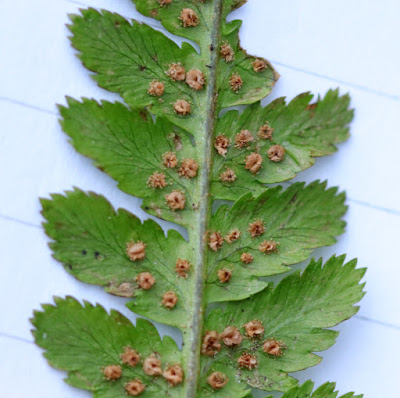 But once they have sori showing, they are much easier to sort out.

These brown blobs on the leaf undersides are the sori that release spores to provide new plants.

Male Ferns have them in parallel rows either side of the midrib and the leaves have rounded tips that are serrated all round.


The impending hailstorm finally arrived and it was like a vertical blizzard. Thankfully, being hail, it bounced off me to the ground, so I didn't get overly wet.  Wild Teasel is in the photograph and around it were the rosettes of next year's plants. 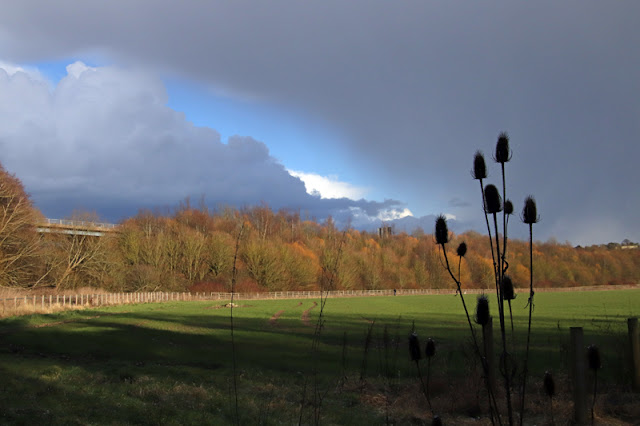 It then became hard for a while to spot the smaller plants as they were buried under a layer of hail. This didn't take too long to melt so back to the task of recording. I found many common plants such as Common Chickweed, Scarlet Pimpernel, Oxford and Common Ragworts and so on. All easy to identify without flowers being present.

There's no mistaking these harbingers of Spring pictured below, the colourful Coltsfoot. These had popped up and flowered next to some waste ground as is their wont. They like disturbed ground and are a frequent coloniser of bare places. They can also be easily identified in the Summer and Autumn when there aren't any flowers present, as they have huge leaves. You can see a dead one in the photo below.
They can only really be confused with Winter Heliotrpoe leaves, but the latter have very rounded leaves with a cordate (heart shaped) join to the leaf stem. 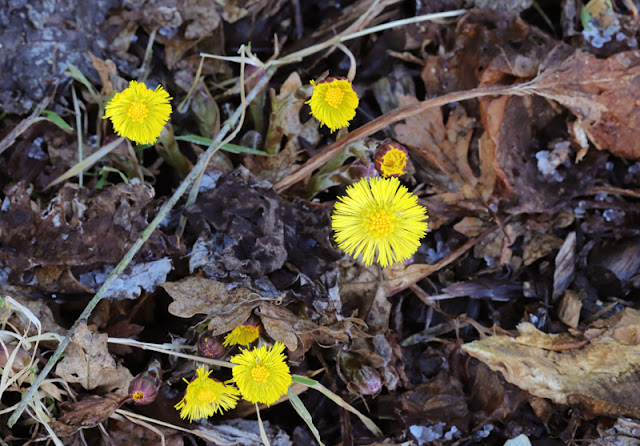 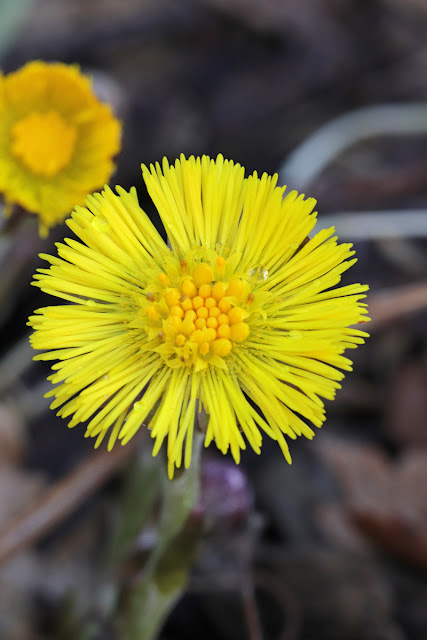 
Here are a couple of views from the walk, the first as the path goes under the M20 motorway. 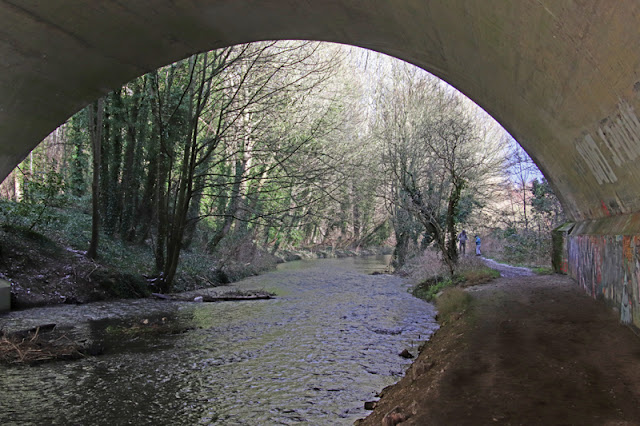 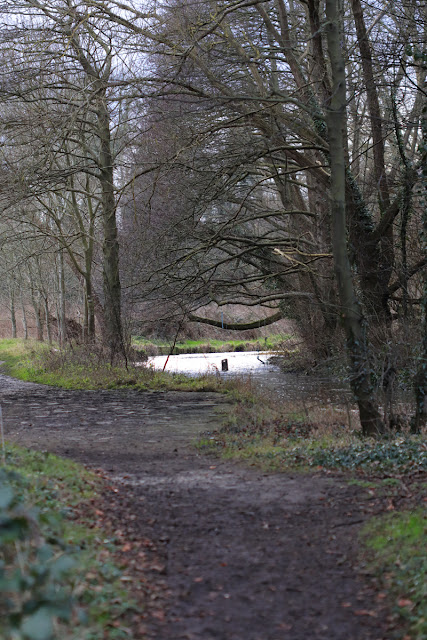 My final photo this day was of the humble Scentless Mayweed, a common arable plant often found around field edges. 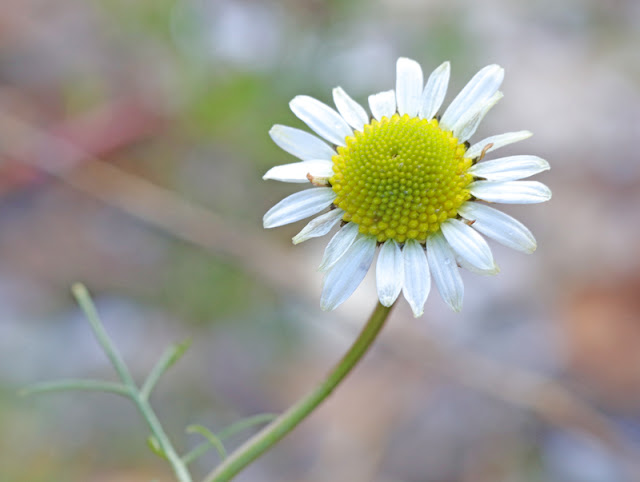 So ended a very cold but rewarding walk. I later found this 1km OS map square (monad) to be in the same area as the nearby Farningham Woods, a heavily recorded place. However, I still managed to add many new botanical records as the river and damp habitat loving plants such as Angelica aren't found in those woods. It's always worth exploring different habitats, even within well known places.

Until next time, take care.