I visit this KWT managed reserve at least once a year if I can, as it is one of the few remaining alkaline fens remaining in the county. Not surprisingly it has a varied and interesting flora. 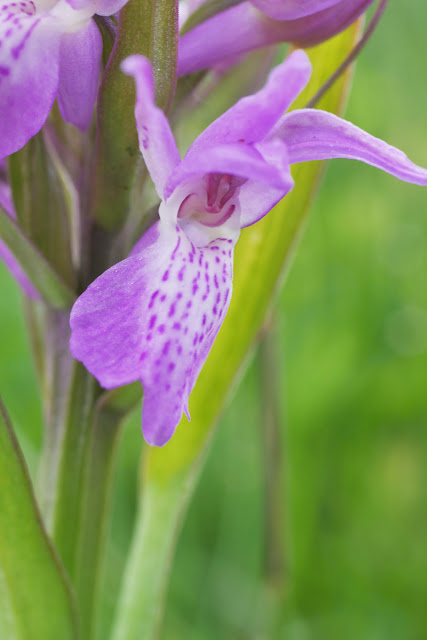 This plant is actually a previously un-recorded hybrid between Early Marsh and Southern Marsh orchids. I found this very surprising as I had photographed this same hybrid here back in 2013 but not put in a record as it was a highly recorded area. I thought someone would have found this already! 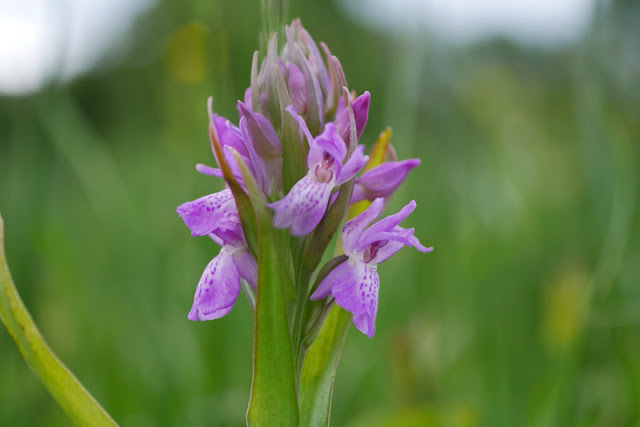 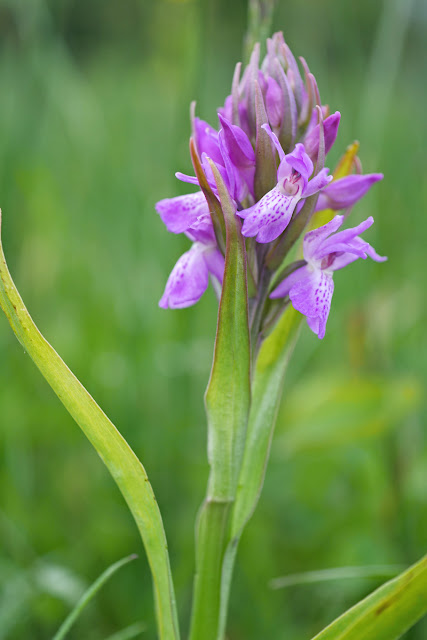 
It goes to show there are always surprises and new things to see, whether in a new area recording for the first time or a well worn nature reserve.

Last year I found a first ever record for Birds Nest Orchids on the nearby Ranscombe Farm, a very heavily recorded area, so it's always worth putting a record in if you find something unusual or rare. It's better to have duplicate sightings rather than no record at all.
Take some photos to back up your record as well. 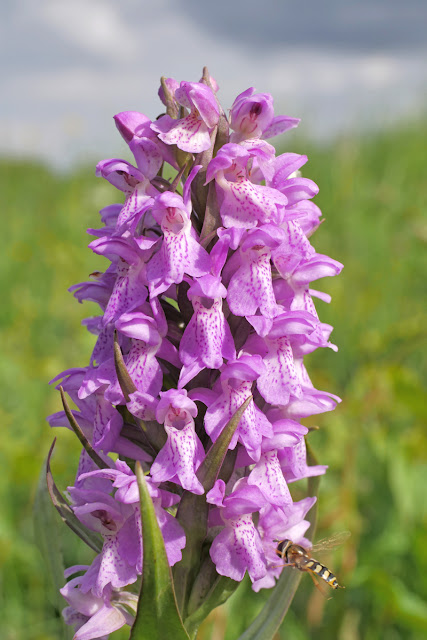 Here is the first parent species of the above hybrid and the most numerous orchid in this part of the fen, the Southern Marsh orchid. 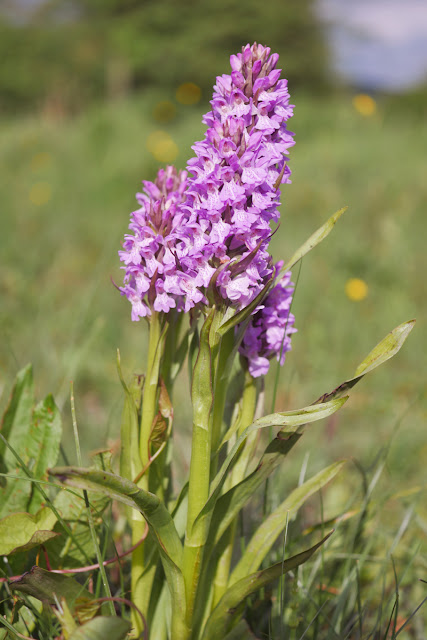 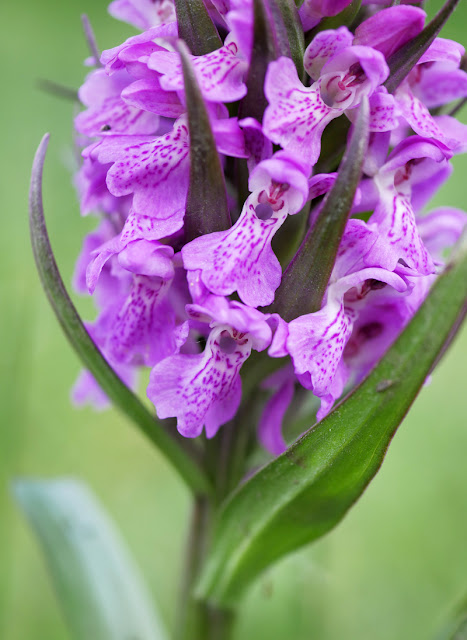 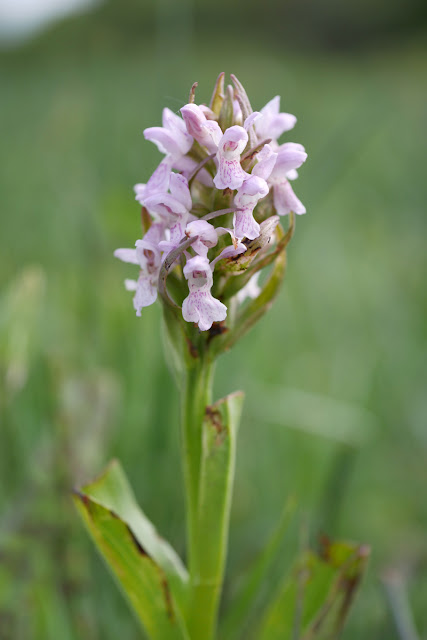 
There is a larger second meadow which often has over 100 flowering spikes but this was being grazed by horses during flowering time so all the orchids had been bitten off. 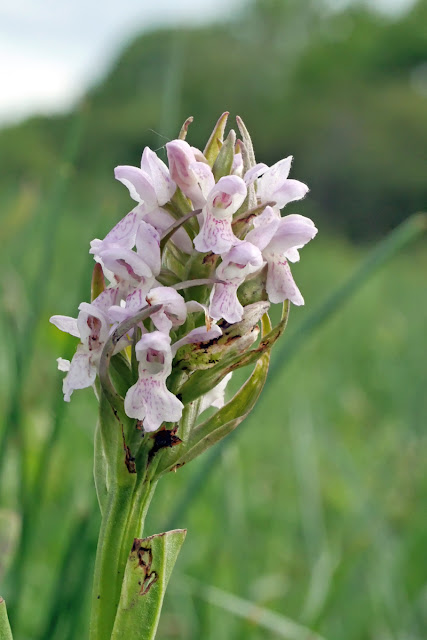 I do hope KWT know what they are doing as this is not the first time this has happened.


Close to this plant was an emerging spike of the Common Spotted Orchid. 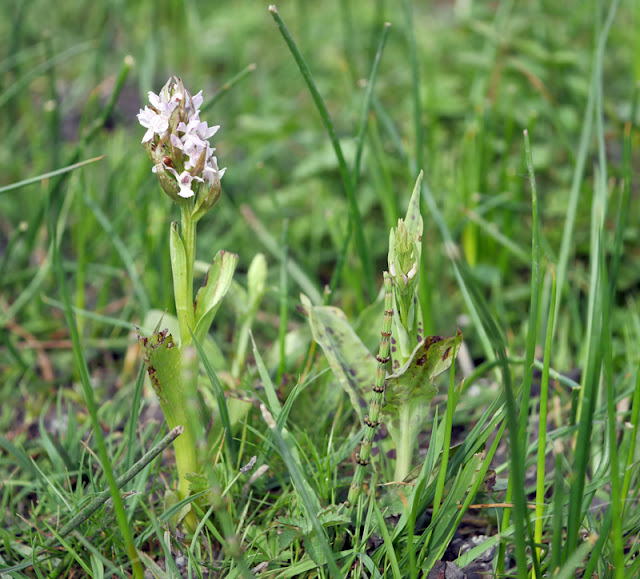 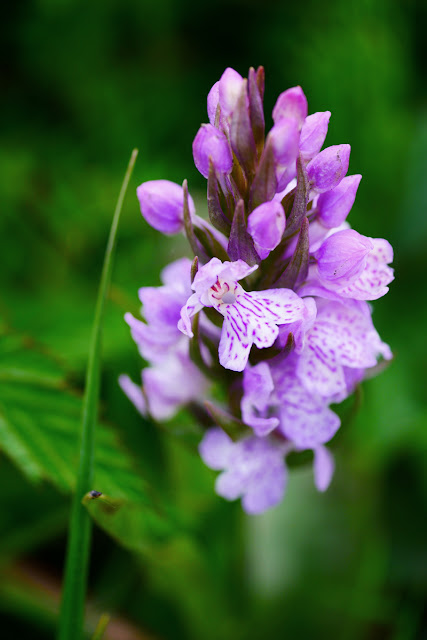 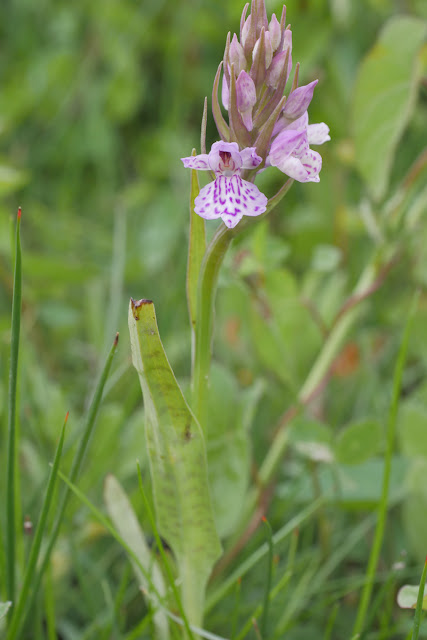 I found a few plants in flower, possibly showing signs of introgression with the other nearby Marsh Orchids.

This wouldn't be far fetched as these orchids are quite genetically fluid and often create hybrid swarms with other Dactylorhiza orchids. 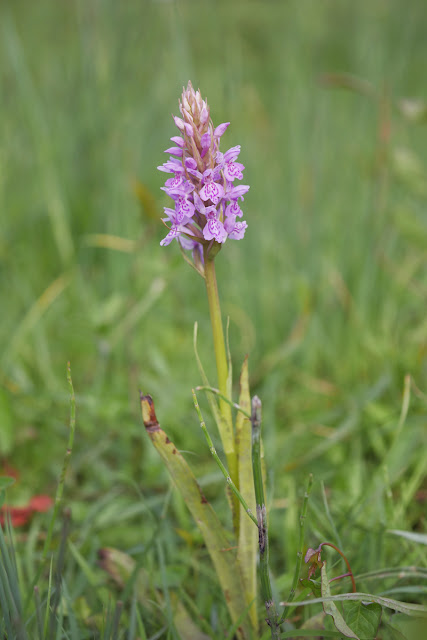 There is an orchid hybrid that was recorded a few years back and one that I have seen both here and in other places quite frequently. It's the cross between the Common Spotted and Early Marsh orchids. As it's such an impressive hybrid plant, I've included several photos. This particular plant was massive compared to all the other orchids in the meadow and  might be the tallest and most robust Dactylorhiza in Kent. 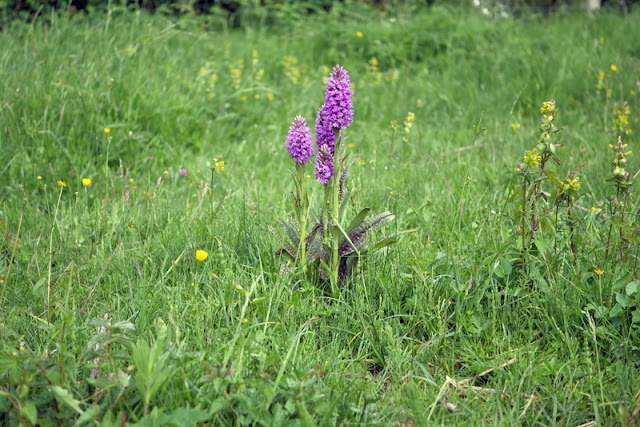 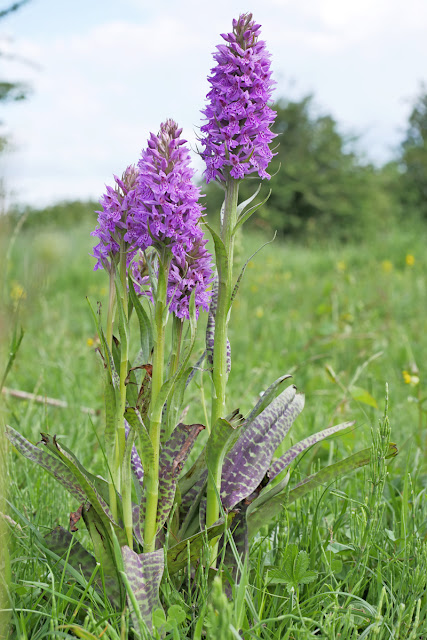 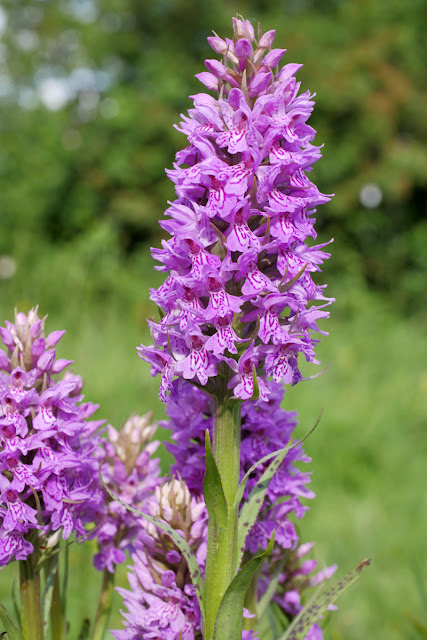 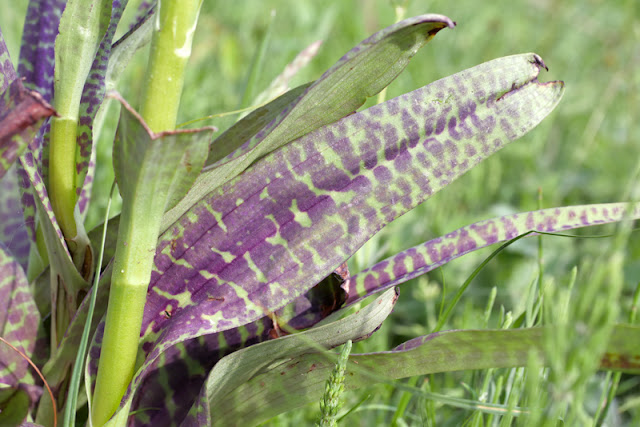 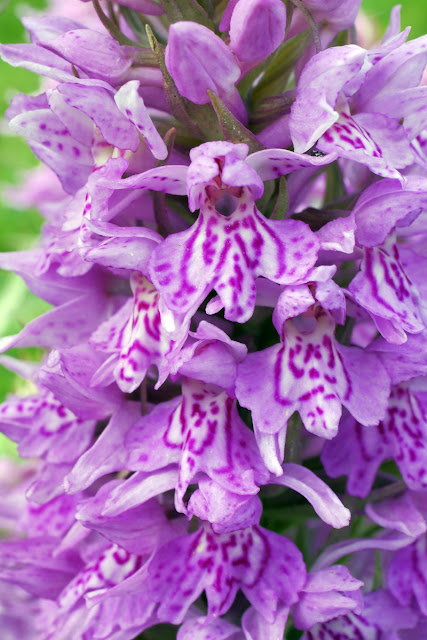 It really is such an impressive plant. 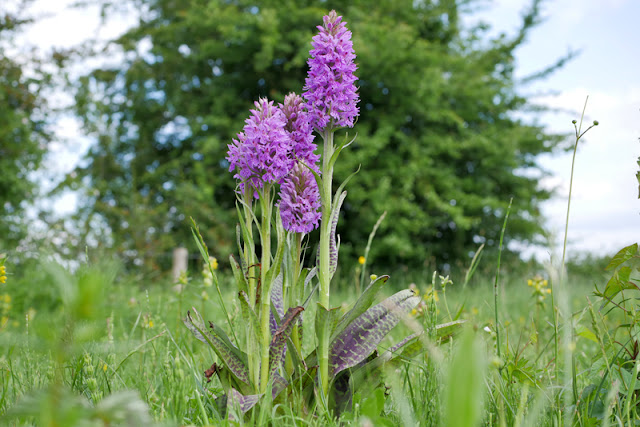 Here's a photo of the meadow. 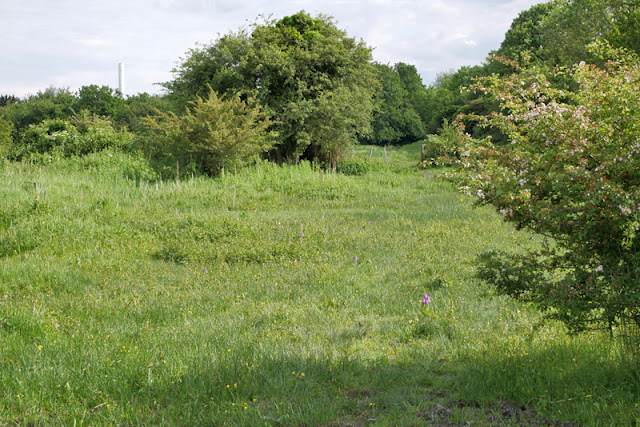 It's all well and good to be all about orchids and nothing else, but if I were only into orchids, I'd have no idea what to do for the months on end that none are in flower. I also find our other native (and alien) wild plants very interesting and I get just as much excitement from finding a new colony of say, Common Cow-wheat than I do of finding a new site for one of our orchid species. I think you already know that from my tweets and previous blogs. It also means you never stop learning, there's just too much to learn in one lifetime, so it never gets boring.

Here are some of the other species I found this day.

This alleyway near to the fen doesn't look very promising, yet it is home to a very rare species of wildflower in Kent and most other counties. The verges of this alley should be green and alive with plants yet the council appear to have sprayed it with weedkillers. 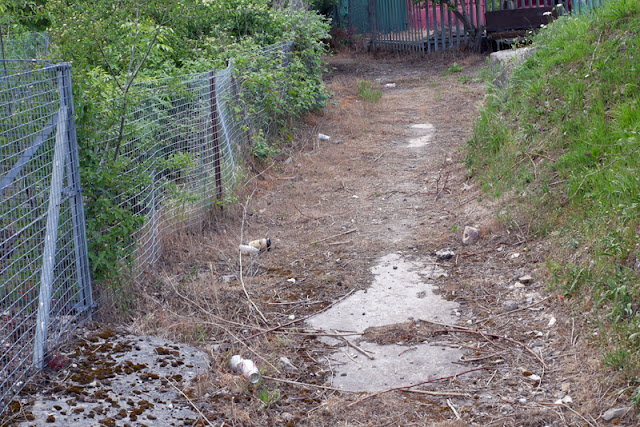 However, tucked away around the fence and missing the sprays I found a few remaining plants of this species and plenty in seed to come up again next year despite the sprayings.

And here is the mystery plant

This is a smaller and more delicate relative of Herb Robert and apart from all parts being smaller, it has yellow pollen to make identification easy. This was also a known site for the species. 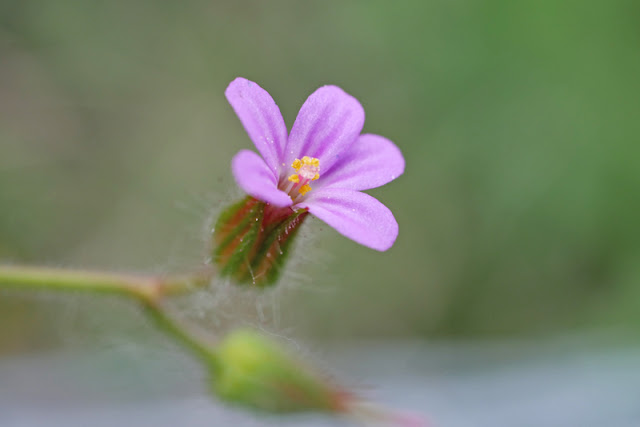 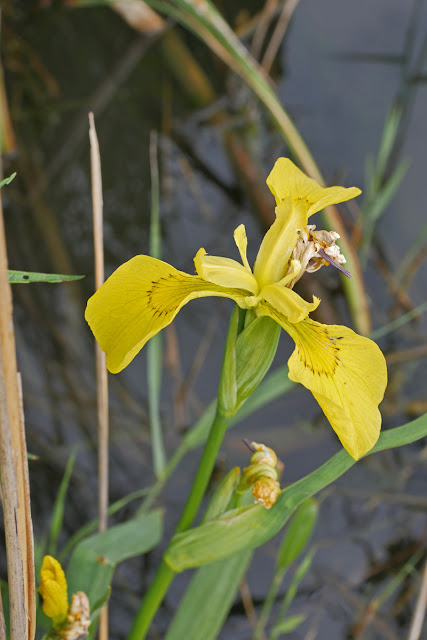 Back in the damp of the meadows, Yellow Flag were in flower.

There was plenty of Water Cress in the ditches though I refrained from eating any. I have munched a leaf in the past and it was much hotter than when it is bagged up and several days old, as bought in the shops. 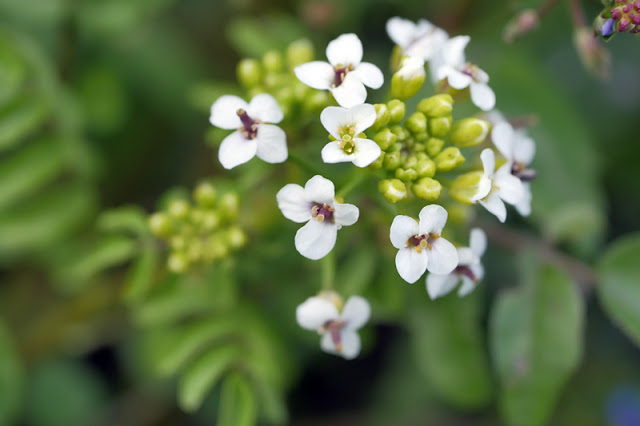 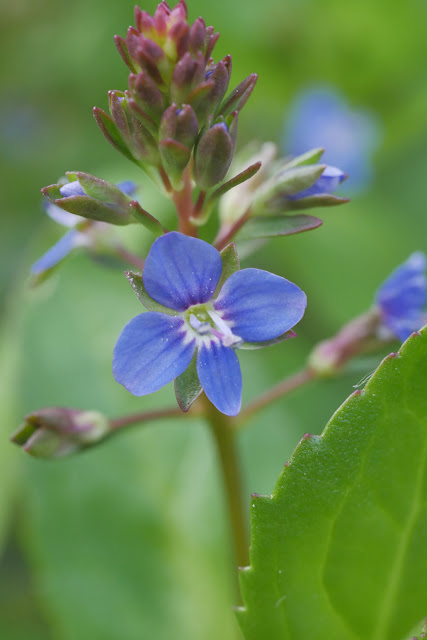 This was my faviourite wild speedwell until I found Spiked Speedwell on the Great Orme a few years ago.

It's Brooklime, a lover of clean, alkaline ditches and damp areas.


Below is a general shot with Water Cress in the background. 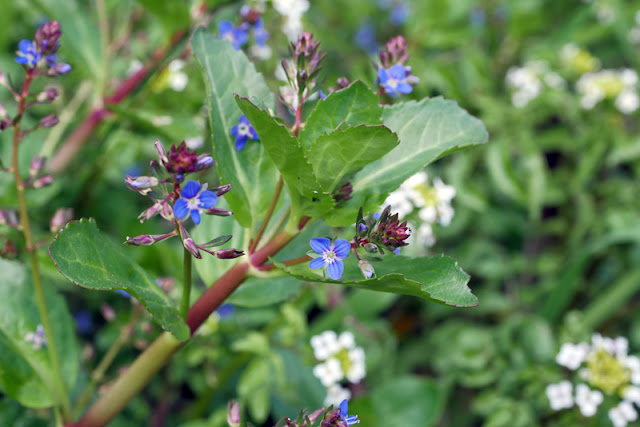 Where there is Brooklime there is often another water loving Speedwell and sure enough I soon found some Pink Water Speedwell. 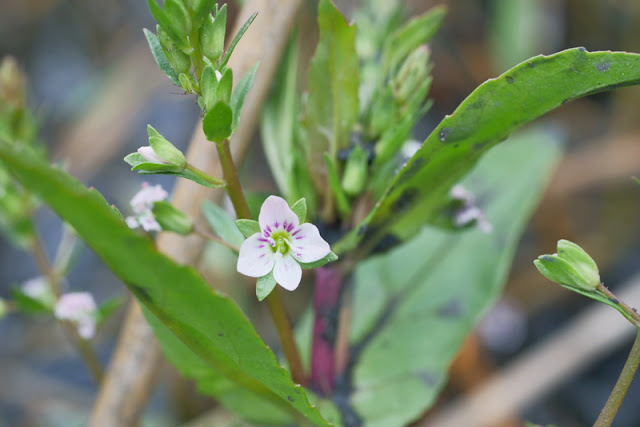 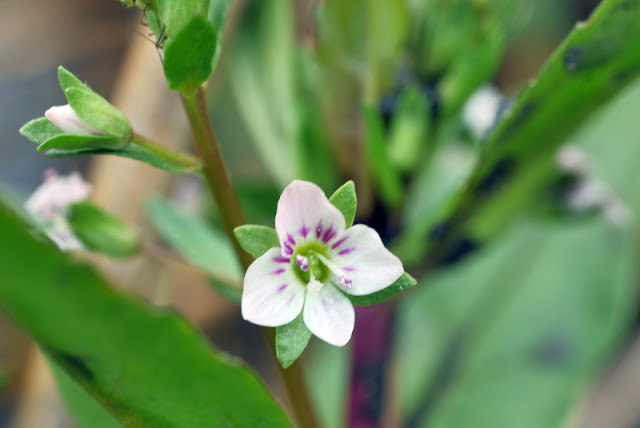 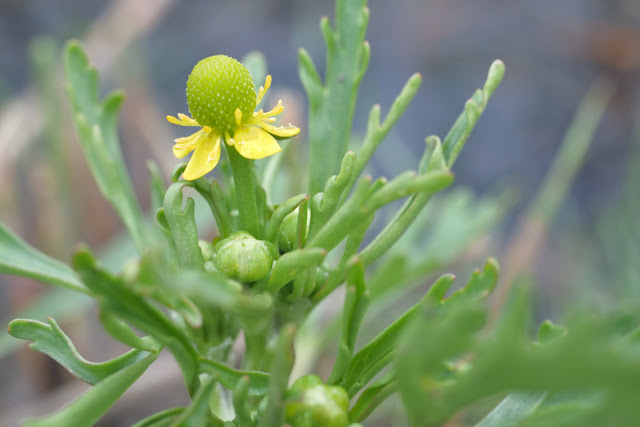 There were numerous other plants seen such as Common Restharrow, Common Mallow, Yellow-rattle and so on. However, I'll leave you now with a massive plant, the Water Dock. It's leaves are several feet long and it can't easily by mistaken for anything else. It usually grows directly in the water making photography rather difficult. 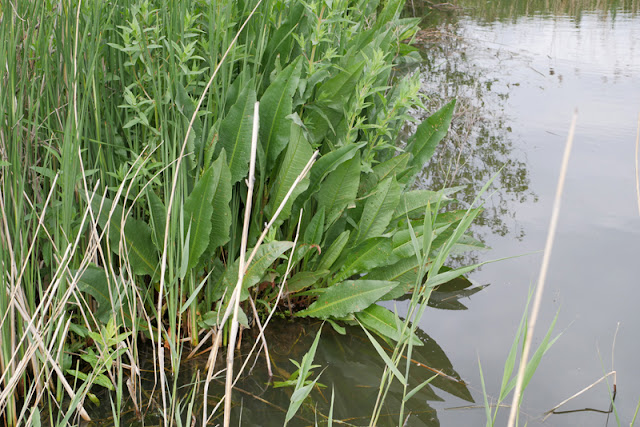 Whilst the time of the year featuring the above plants has now gone and many of these plants won't be seen in flower until next year, I hope it highlights their beauty and shows the value of thier ever declining and under threat habitats. Keep going out and looking around, you might find a surprise yourself.