- December 27, 2019
Every year my partner and I find some amazing botanical treasures, but with each new find the one before fades into memory until they become forgotten, even after a short time. Thankfully, as a botanical recorder, I can jog my memory by looking back at my record sheets to renew my aging memory, so here are some of the highlights of our finds from 2019. 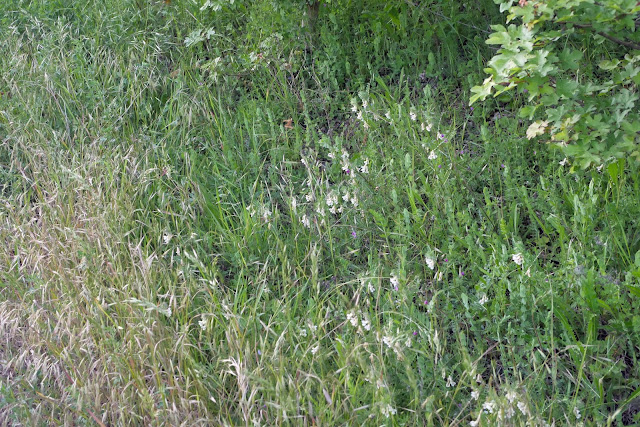 On this day I found a substantial colony of V. panonnica on both verges of the B260 for a hunded metres or so east of the A282 bridge (nr Dartford).
There were hundreds of plants in flower, which at first I thought were anthocyanin deficient V. sativa plants (Common Vetch). I posted some photos on Twitter of it and a botanist suggested V. panonnica which it subsequently turned out to be.
However, this was not a first for VC16 West Kent as described below. 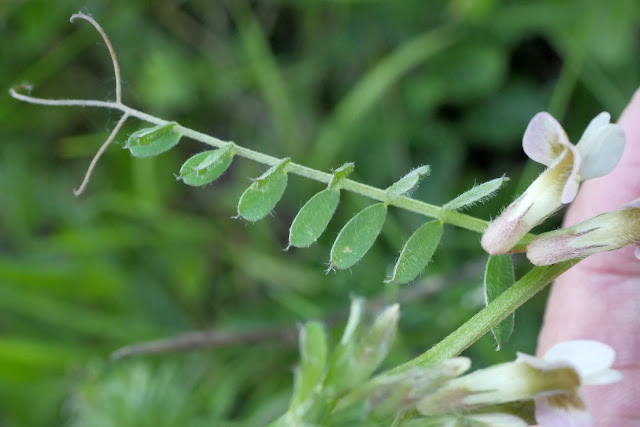 In 1977 V. pannonica (Hungarian Vetch) was found by G. Joyce on a motorway slip road in TQ57L and refound in the 1990s by Eric Philip presumably at the same location. This description would likely be one of the slip roads from the M25/A282 onto the A2 at that time.
It is unlikely that this would be on the B260 as it crosses high over that road. However, in the late 1980s, the A282 was widened and the bridge carrying the B260 was realigned and lengthened. This required the import of large amounts of earth and sand  to complete. The sandy soil can still be seen today around the bridge area even though there is much scrubbing over. Either side of the bridge area, the soil reverts to thin turf over chalk.
I believe it was during these works that V. panonnica was introduced to the B260 verges. It could have been from amenity sowing when the works were complete or from seeds picked up by machinery working on the motorway below.
Also of note, is that this same area has hundreds, possibly over a thousand Lathyrus aphaca plants which are absent from the rest of the immediate area. This possibly lends weight to the theory that both plant species arrived by amenity sowing after the roadworks were completed.
V. panonnica has not been found anywhere else in East or West Kent. It resembles a sturdy Vicia sativa Ssp. segetalis but is hairier and mostly has more leaflets as well. Of course the dirty white flowers with brown veins is distinctive in itself. 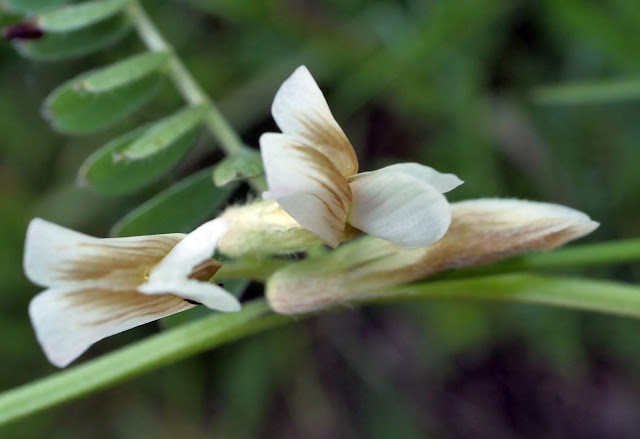 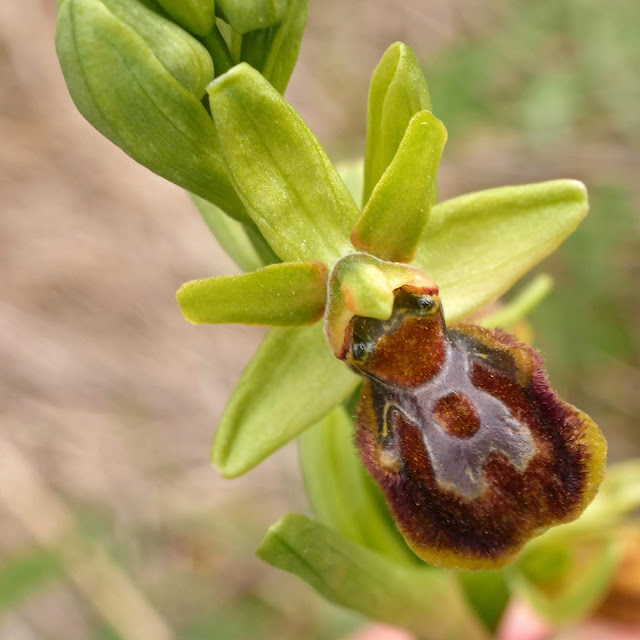 Myself and my partner found 9 flowering plants along the sea wall in TR0826 and TR0825 Littlestone Warren.
This new colony of orchids was between two known colonies; the massive population at Samphire Hoe and the single plant left at Dungeness, many miles to the east and west. I'm amazed I got any in focus photos as Storm Hannah was belting through this day and the wind was gale force. 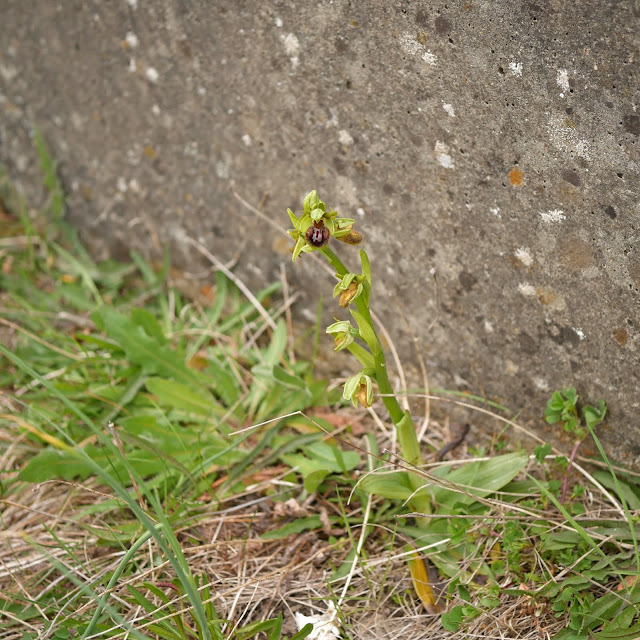 This find plugged the gap between those populations and was a significant discovery as they had never been recorded in this area before. A few more plants were found by others a few days later when they went to see them. 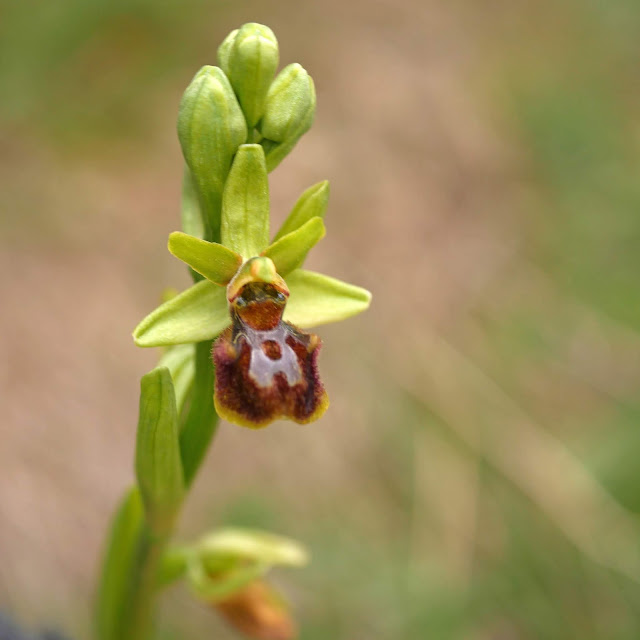 Here's a habitat photo for them. 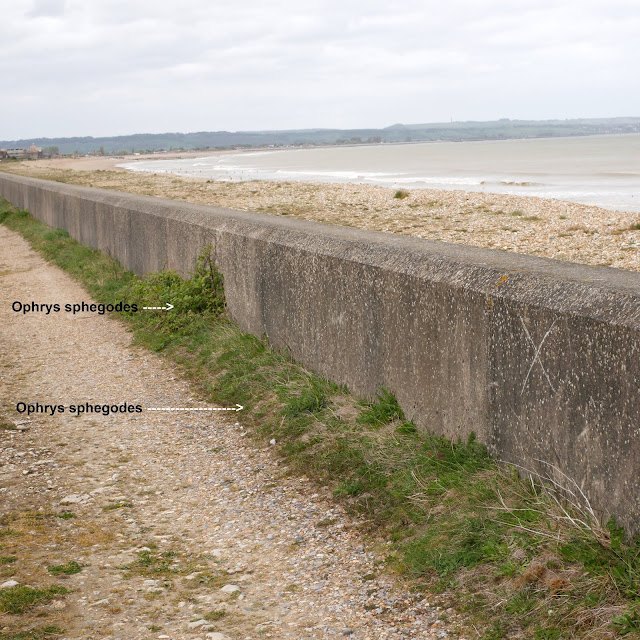 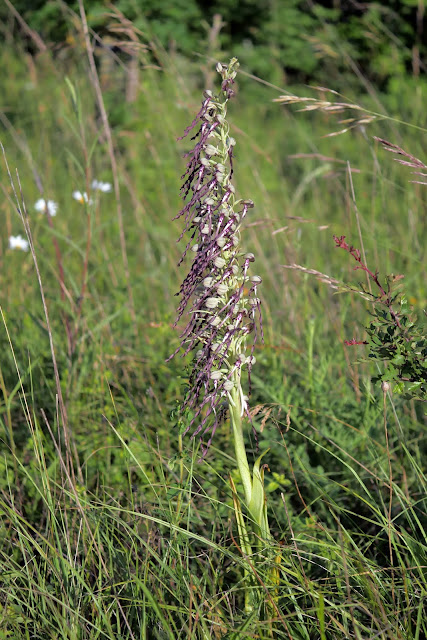 Imagine finding one of these in full flower jut a few hundred yards from where you live. You've walked this area many times and never seen this orchid here before. In this case, I was walking along looking to add Ophrys apifera (Bee Orchid) to the monad records and suddenly stumbled upon this! 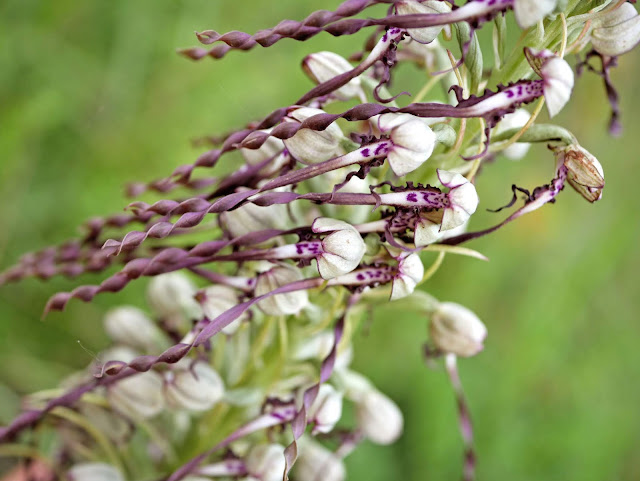 There was something prophetic about named storms for me this year. I was only out for a short walk locally as Storm Hector was battering the UK, unusual for June The storm put me off going further afield, so I wouldn' have found this without that diversion. Tale a look at the lizard orchids' individual flowers; they were all blown to face the same direction from the strong persistant wind this day and the next. 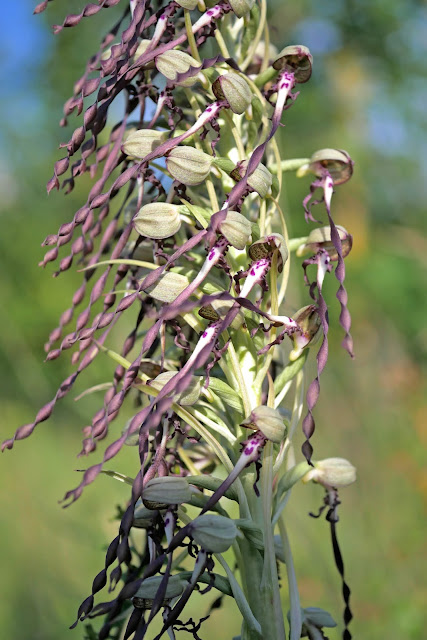 Unfortunately the record is just within TQ56 which includes the well known plants at Lullingstone.
I found the plant only about 100m away from TQ66 with the last definite record for this species being found there in 1924. It was also only about 300m away from TQ57 which shares a record with the famous botanist Robert Pocock who found it in Dartford in 1800.  1921 was the last record here too. As such, the discovery of this plant suggests an expansion of H. hircinum to that of almost a century ago, an encouraging sign. Another plant discovered in the London Borough of Bromley by a railway station also seems to confirm this. 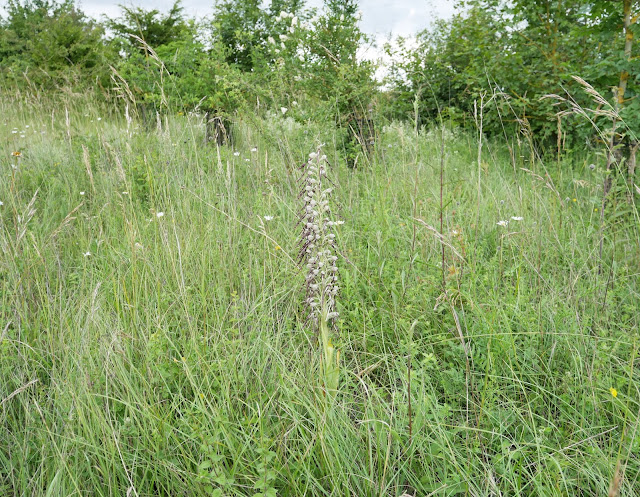 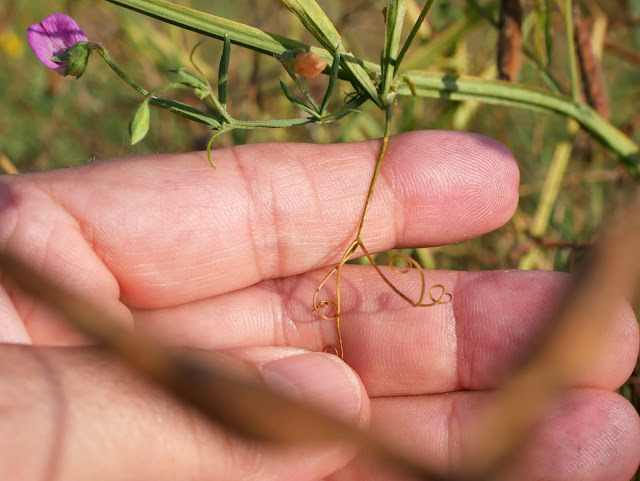 Swanscombe Marshes have been well documented by botanists pending the whole peninsular being re-developed, or so one would think. However, there were two monads (1km x 1km OS map squares) to the east that had been missed. So I set out this day to put that right.
At first I thought these were a late flowering Common Vetch, but a closer look showed their colours to be totally different with almost white wings and keel set against a deep pink/purple standard.
After some research when I got home, I found them to be Hairy Vetchlings, a first for me and a rare plant in Kent. Unknown to me at that time was that they had been recorded nearby, but not in the monads I had found them in. 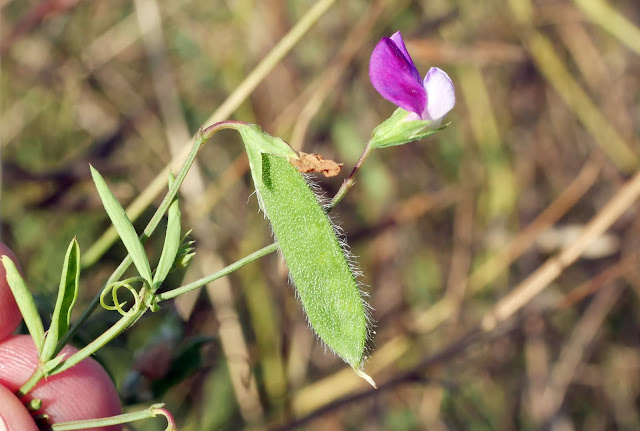 Being small and thin, unsurprisingly they were difficult to photograph, especially in the breeze around this day. They were scrabbling up and through any adjacent vegetation and if they could support themselves would be about three feet tall. But of course they can't and their tendrils clasp any plant nearby for support, and most were less than a foot off the ground as a result. 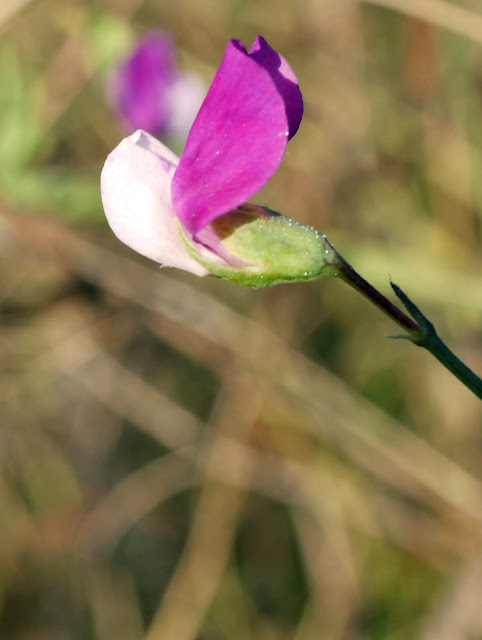 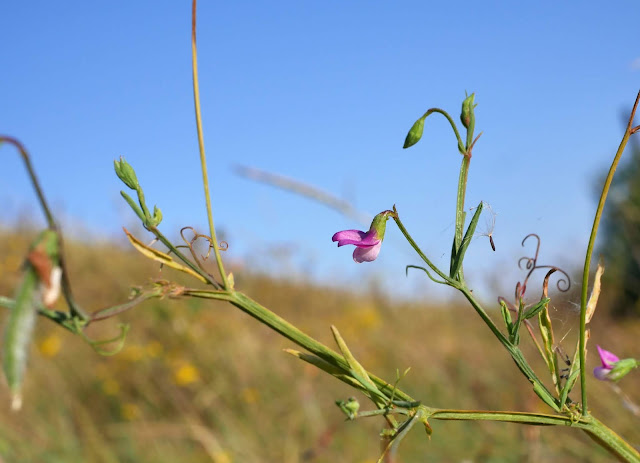 The same day as the last species and in the same area I found an amazing variety of Sand Lucerne with all shades of petals from metallic black to yellow. However, the unusual thing and my reason for inclusion here was the following plant was the first I had found with different coloured flowers on the same plant. "Harrap's Wildflowers" book says this happens, but this is the only plant I've seen this phenomenon, and I've seen several hundred Sand Lucerne plants. 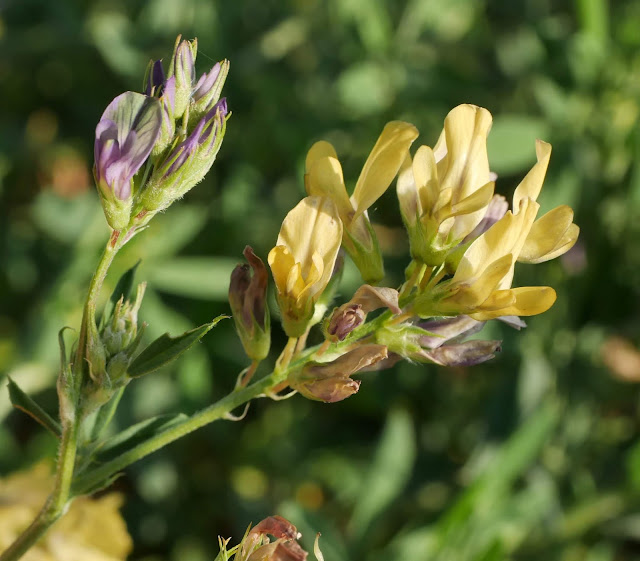 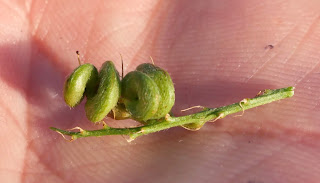 I do believe work is about to start on destroying this whole area for a theme park and yet more housing. 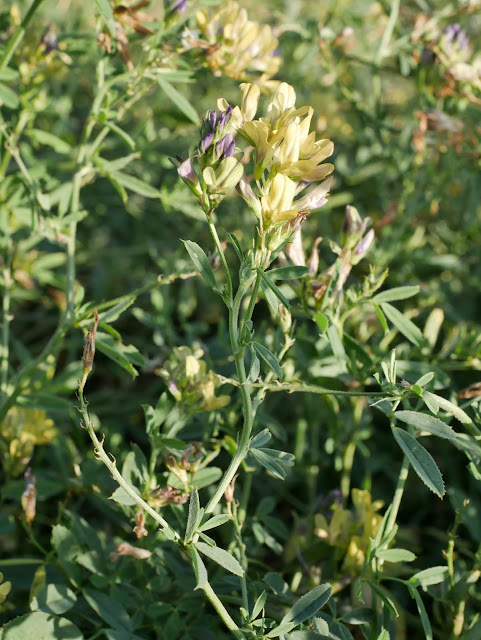 The next plant also has a small population on the Swanscombe peninsular, though I havent' found it yet. I'd only previously seen this species in Wales.
26/08/19 - Pyrola rotundifolia
Round-leaved Wintergreen 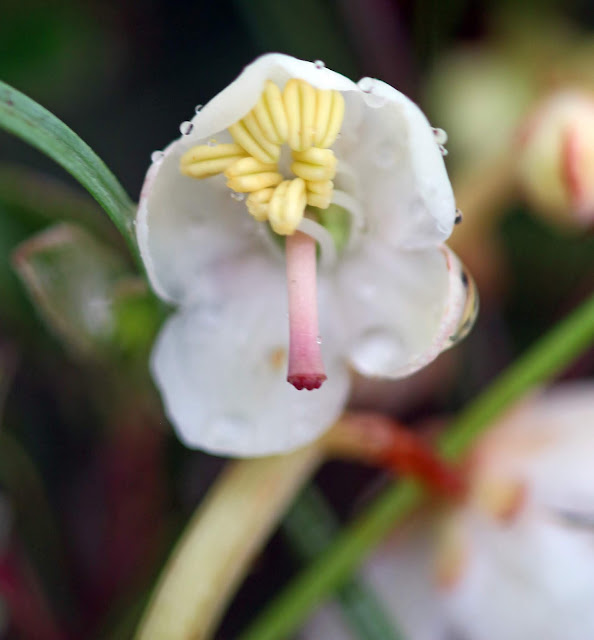 The eastern quarry opposite Bluewater has been out of bounds to the general public for many many years. It comprises of a vast disused chalk pit which is slowly being developed for housing. The first phase of housing was now complete and allowed entry to an area previously unreachable.
This plant which I really wanted to see, was easily found as there were hundreds of them all along a damp area several hundred metres long. Some were still flowering too. 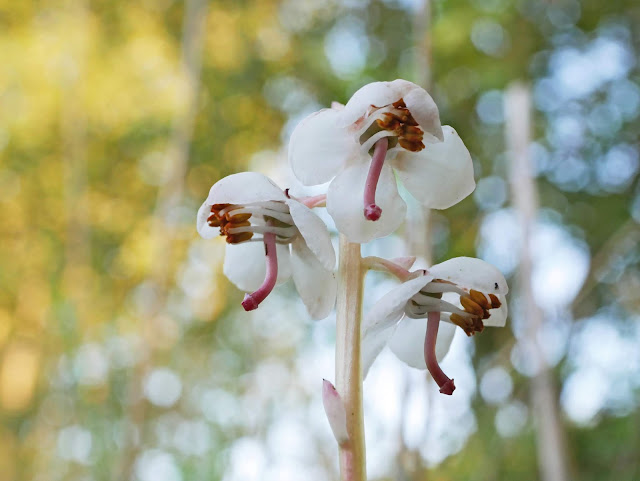 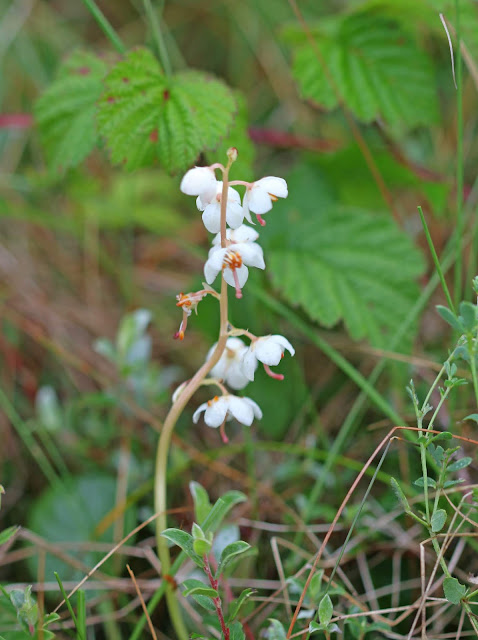 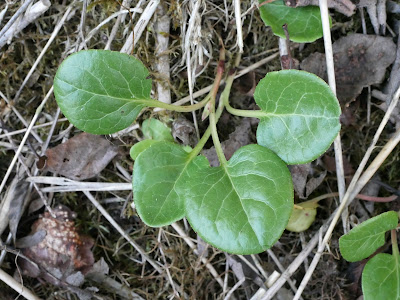 There were of course many many more species that I could have written up, but I think keeping this blog concise keeps the finds to the most important ones that me and my partner found this year. I hope you enjoyed reading about them.
Take care
Dave
@Barbus59