- October 23, 2016
There is a large arable field just North of Longfield that has been left fallow for well over a year. I thought it might have some interesting arable plants now so I had a quick visit to see what I could find. Apart from being a nice open space, it doesn't look much does it. However, when the farmer leaves it a while before spraying, the seed bank in the soil comes to life. Longfield can be seen to the left of the photo. 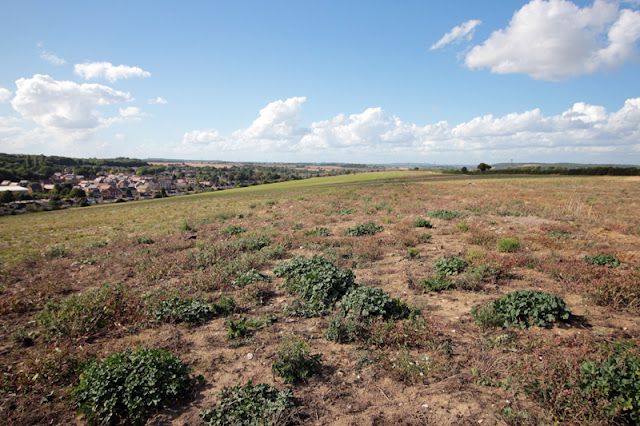 Scarlet Pimpernels are almost guaranteed to be present and can be found in a variety of habitats from pavement cracks to shingle areas. However, arable field edges are their stronghold. Always keep a look out for subspecies, such as the rare Blue Pimpernel or a rose coloured variant. 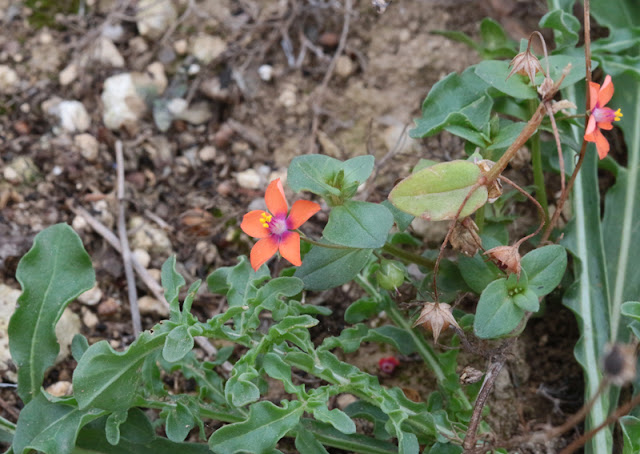 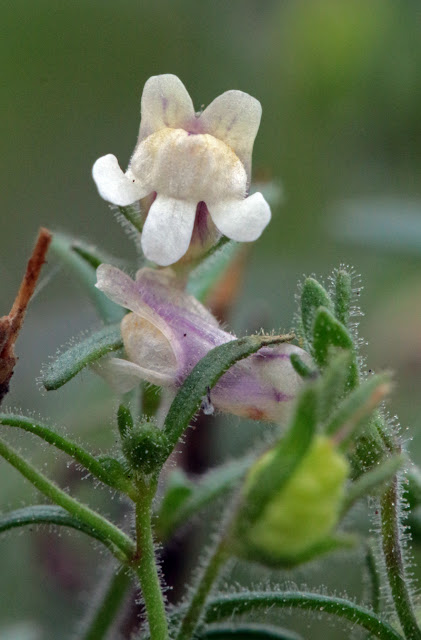 There were at least a thousand of these Small Toadflax plants scattered throughout the field, with their snap draon type small flowers being distinctive.

The flowers are mostly white, but look closer and you'll see pink and lilac shades as well. 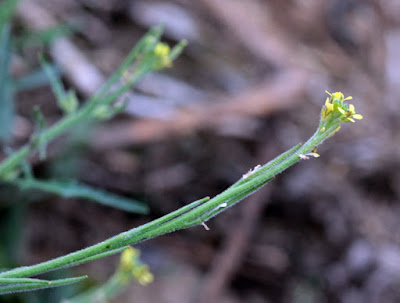 Yellow crucifer flowers of the cabbage family can be tricky to identify. This is Black Mustard, it's seeds being pressed tightly to the stem, topped by tiny four petalled flowers. Without seeds present, identifying them can be difficult!

I was quite surprised to find several Great Willowherbs in the field, usually a waste ground species. I guess the field being fallow for over a year has given seed the opportunity to grow and flower. 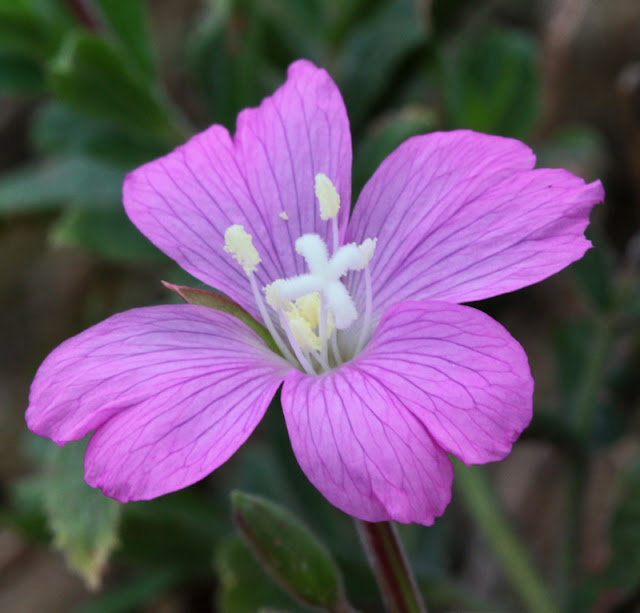 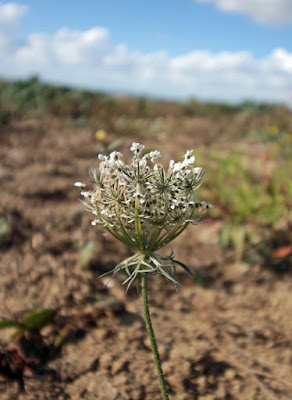 Here's another colonist from a nearby chalk meadow, Wild Carrot. As the flowers go to seed, the whole flower head curls up into a ball, very distinctive, as are the branched large bracts below the flowers. 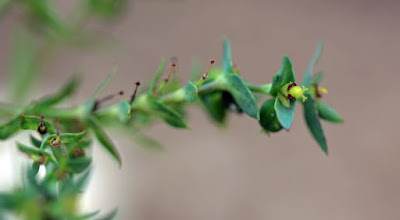 I then found my first rare plant, Dwarf Spurge, on the Kent Rare Plant Register. They are quite insignificant, as the name suggests, and easily missed.

I had found some about a mile away, but this was the first time I had found them here.

Here's the whole plant, it's past its best and going to seed now. 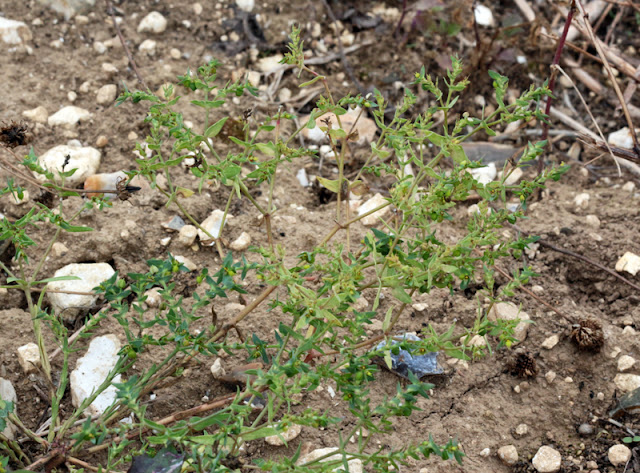 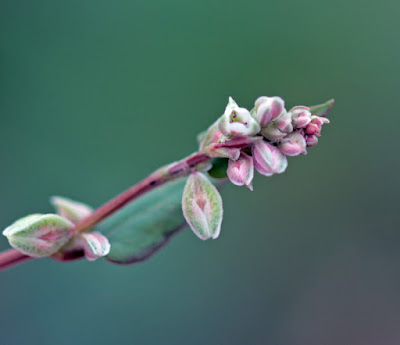 There were masses of Black Bindweed in the field, not surprising as these can often survive moderate spraying. 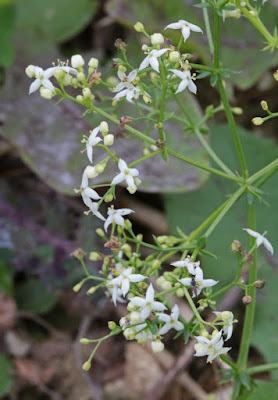 Here's another plant I didn't expect to find in the middle of an arable field, Hedge Bedstraw. It really is surprising how quickly nature can come back if left alone. 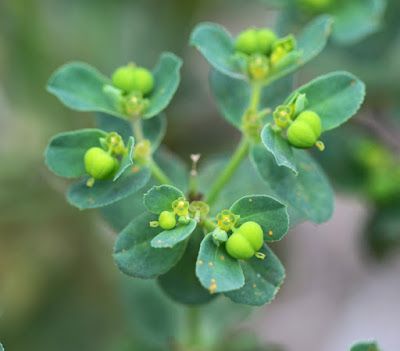 This is a common plant in fields, the Sun Spurge. You can just see the orange dots of a rust fungus that attacks these as they die off. 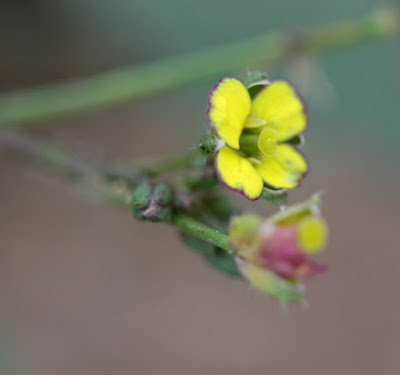 Another yellow crucifer was present in large numbers, Annual Wall Rocket. Key to identifying these are the basal leaves which are long stalked with broad side lobes.

If the stem is woody, consider Perennial Wall Rocket. 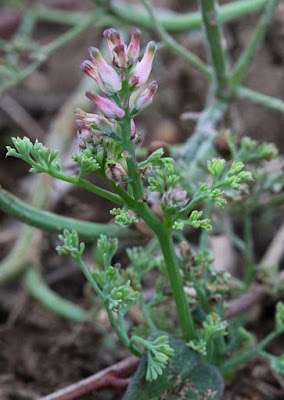 Common Fumitory is present in most arable fields. They are very tricky to identify. To do so take measurements of all parts of the flower, especially the sepals.  Note the shape and colours of the flower parts, better still, take detailed photos to work it out later.

I had time to do neither this day, so haven't identified it firmly to species level. 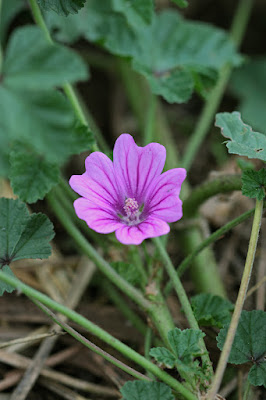 In one smaller area of the field, there was a different soil. Instead of poor soil on chalk, soil had been imported by the farmer to enrich it. There was a gone over crop of spring onions there.

The flora changed with the soil, and Common Mallow was prevalent.

Then I spotted another Mallow within the group, much smaller with delicate white flowers, streaked with lilac.
It was the delightful Dwarf Mallow 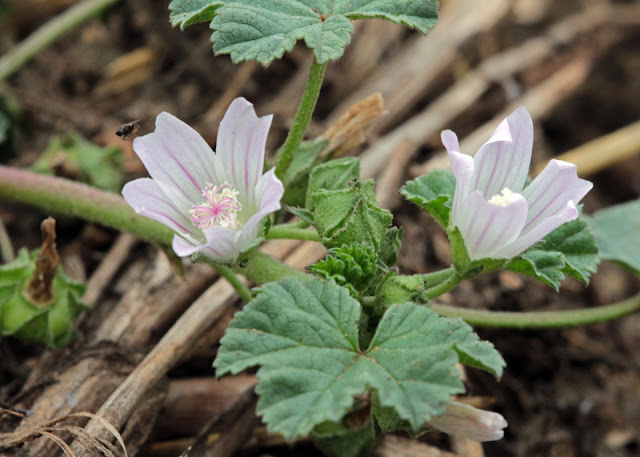 Here and there were bunches of Common Poppies. It's past the time when some fields turned red with them, but they are always nice to see. 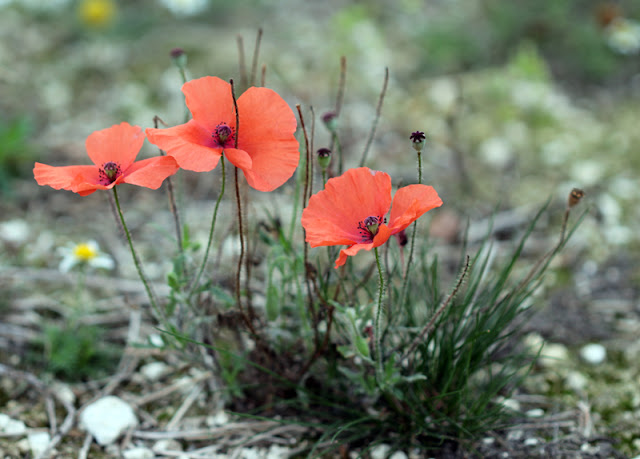 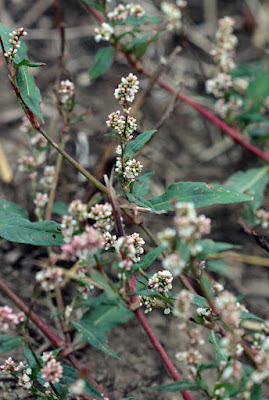 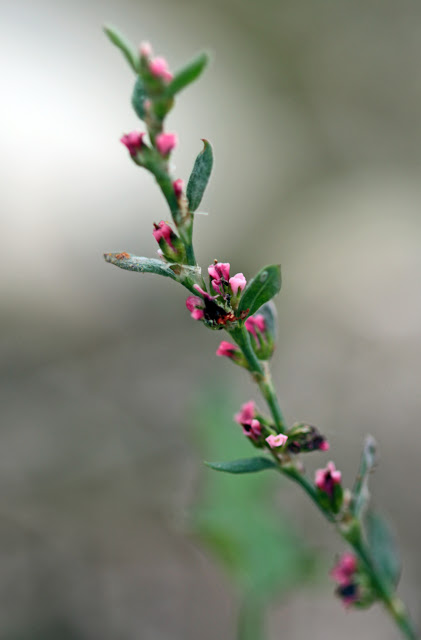 Knotgrasses were ever present and were barely noticed. But in this area I noticed these looked different, with red tipped tepals and long straggly stems, quite unlike the normal Knotgrass.

Just to check I picked some "normal" Knotgrass and compared the two, they were definitely very different.

My County Recorder later identified it as Cornfield Knotgrass, a first for the area and a Rare Plant Register find.

The tiny nutlet poking out from the calyx is distinctive as well as the red tipped tepals.

I'd not seen them before.

I guess the seed was in the soil that the farmer used to enrich his field? 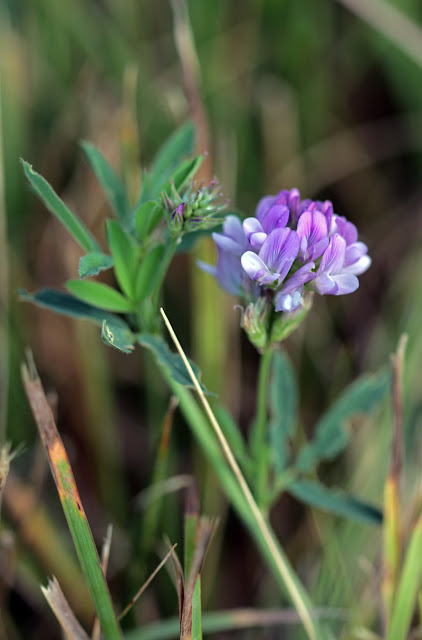 As I left this area, I headed towards the field edge and a hedgerow. Along the way I found some Lucerne still in flower. An attractive plant of the pea family, it is often sown as a fodder crop. It can also be found on many roadside verges in this area. 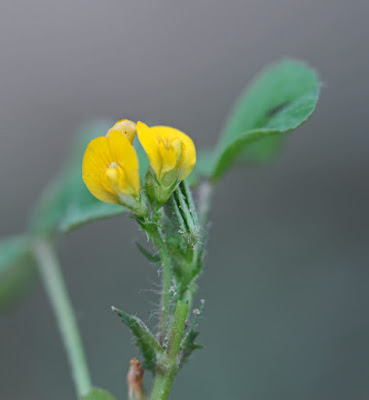 Here's a relative of Lucerne, the Spotted Medick. It's trifolium type leaves spotted with black triangles. You often find them in lawns! 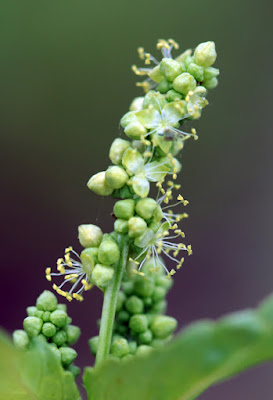 Another common pavement "weed" present in large numbers was Annual Mercury. You may never notice its flowers unless you look closely, as there aren't any petals and the whole plant is a pale green colour. 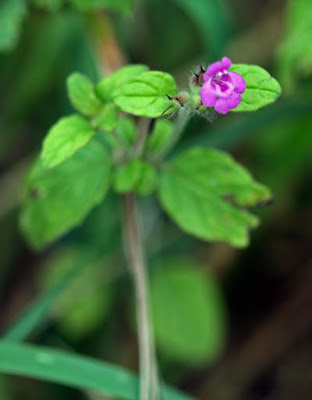 At the base of the hedgerow were several Wild Basil still in flower, a classic wildflower on chalk.
Marjoram was also present, but now in seed. 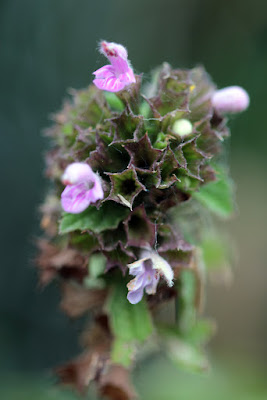 Black horehound was also still going in the hedgerow, it's related to Dead-Nettles and is very common. If you crush a leaf and smell it, it gives off quite a rancid smell, but bees and insects seem to like the flowers.

I could have gone on quite a bit longer with flowers such as Bristly Oxtongue, Rough Hawkbit, Shepherd's Purse and so on. It just goes to show the diversity of a single field when given a chance and not sprayed into oblivion every year.