- March 12, 2017
It's been a very slow start to Spring in Kent, following a prolonged cold snap in January and February. Most plants are flowering 2-3 weeks later than they did in the preceeding three years.
Thus it's been quite a challenge to find anything to write about, but as I do write this, Spring has finally arrived in Kent. Each week now, more species will come into flower.
Today's blog details those found in the last 2 weeks at various sites. 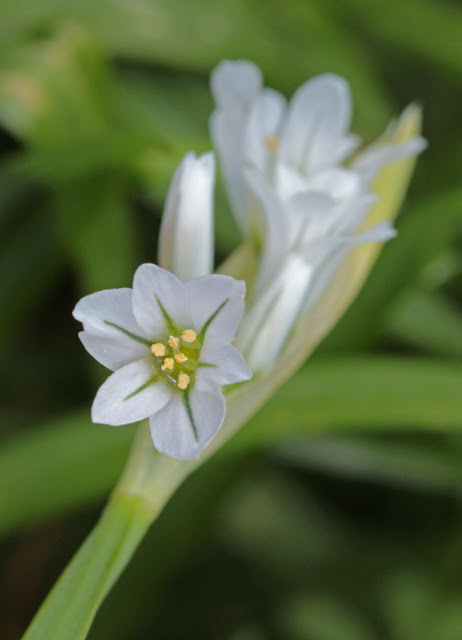 I'll start off with a trip to the Sandgate and Folkestone Leas area on the South coast of the county.


This is a garden escape long naturalised on shingle here. It's Three-cornered Garlic.

It has drooping sprays of white flowers with obvious green lines running down the petals.


And if you crush any part of it you get a lovely Garlic smell akin to being in a French restaurant perhaps! 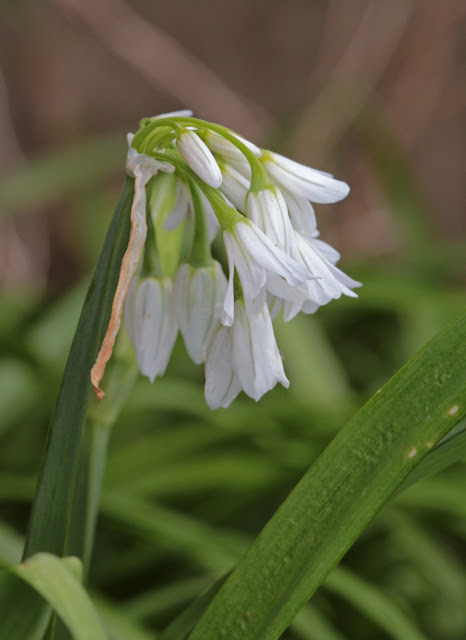 I found the plants flowering below, in the car park at Sandgate and also along the base of the sea wall. It's Danish Scurvygrass and is very small! It's supposed to be found on the coast, usually in a spray zone as it is very tolerant of salt.

It has now colonised hundreds of miles of main roads throughout the country due to us salting them during the Winter. Very soon the A2 near Dartford Heath into London and many other places will turn white with their flowers. 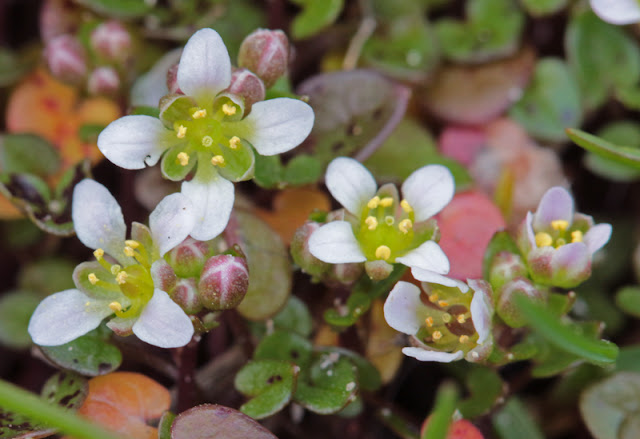 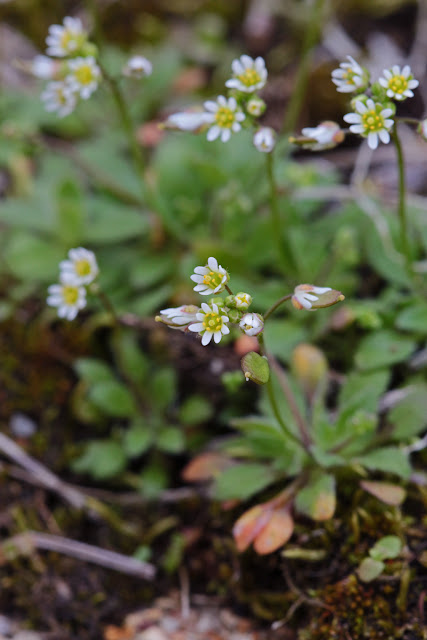 This Common Whitlowgrass is one of the first early Spring flowers to bloom but most people will never even notice them.

This is because, for the most part they are less than six inches tall and in places can be just one inch tall complete with flower!

They love to grow in places where other plants can't such as nutrient poor soils on concrete, pavements, roads, car parks and so on.

They're already going to seed in places and within a few weeks the basal rosette will also die off, leaving no trace of them to be found until next year. 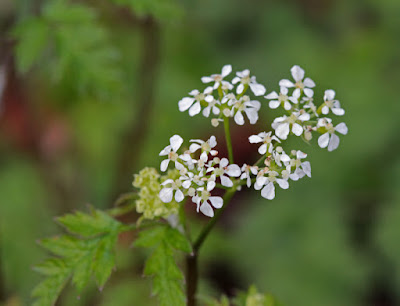 I found this Cow Parsley flowering on Folkestone Leas. It's a very common plant that in a month or so will line all the rural road verges in the county. It's one of the lucky plants tthat sets seed before the council mowers move in, usually in early June.
This is the first one I have seen flowering in the county so far in 2017, I suspect due to bing sheltered under trees on the coast, reducing the effects of those hard frosts we had. 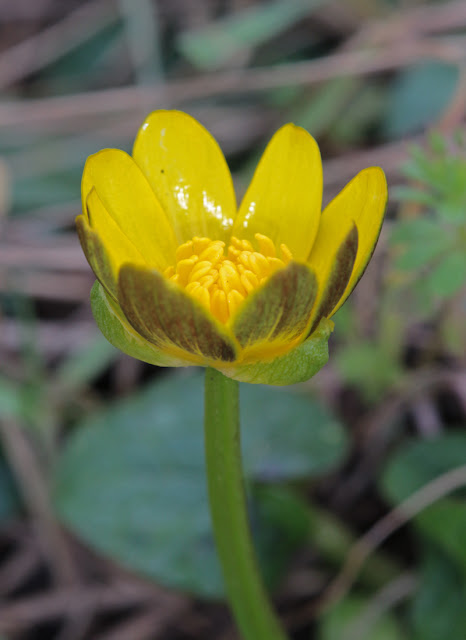 Here and there along the Leas I found Lesser Celandine in flower. This species has gone from none flowering to hundreds within a week. They really are blooming well now around the county.

There are actually 4 subspecies of this wildflower; 2 of which are garden escapes with bigger flowers, this one subsp fertilis and a subsp verna with small flowers and tubers growing in the leaf axils.

You really need seeds to tell them apart though. 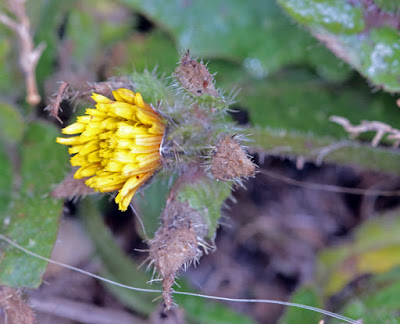 Along the sea wall were assorted Dandelion like plants starting to flower. This one is easy to identify by its blistered leaves and prickly collar under the flowers. 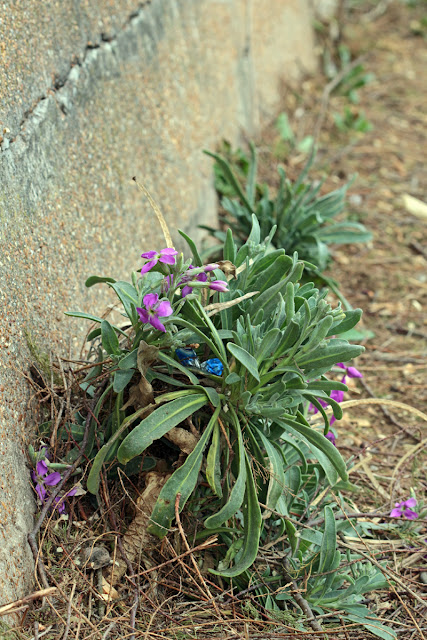 My partner then found this plant, which oddly enough, most people didn't even notice growing out of the sea wall.

It usually grows on chalk cliffs, either near the edges or on the precarious slopes.


It's Hoary Stock, related to the Stock plants that grow in gardens, but this one is a rare native of our shoreline.


It's on the Kent Rare Plant Register as there isn't much suitable habitat left.

I left the blue bit of litter on the plant for the photo to show just how much we all care about the environment .......... 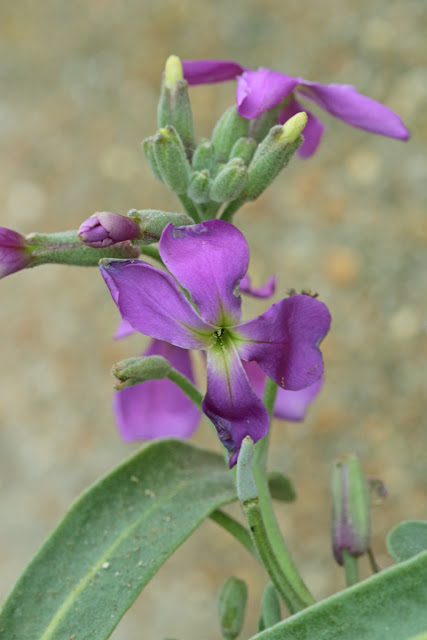 Last year I found all white flowering variants of this plant in the South Foreland area near Dover. 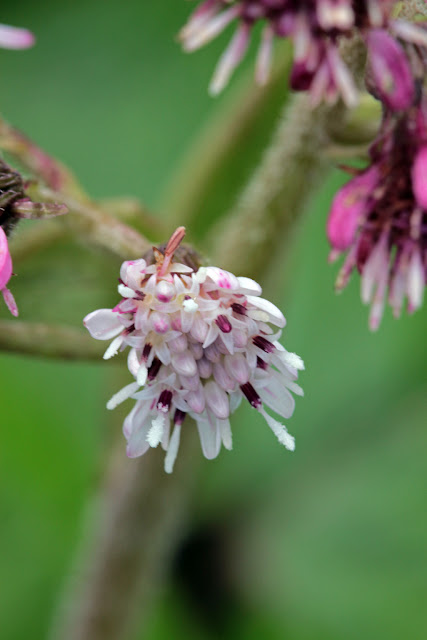 On Folkestone Leas at its Western end were a fine display of Winter Heliotrope. These start flowering sometimes in late December, so there isn't much time left now to see them.

They are an introduced garden escape and they have colonised  miles of roads throughout the country, forming dense blankets under which not much else can grow.


As their name suggests, they have a pleasnt scent.

There's a native relative of this plant detailed further down in this blog.


I was pleasantly surprised to find Sea Campion in flower, and I hadn't expected to find any out this early. However, these were high up on a part of the sea wall and maybe this protected them from frosts, being warmer a few feet off the ground than directly on it (so I'm told). 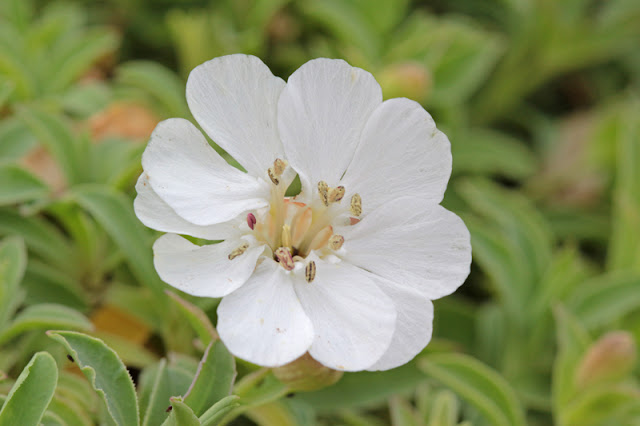 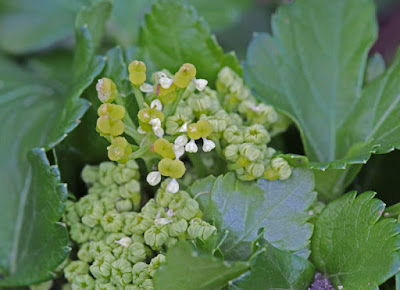 This is Alexanders, pretty much light green all over with small white petals. Brought over in Roman times, it has now spread profusely around all of the Kent coasts and several miles inland in places.

Insects like the flowers and soon they will attract lots of beetles, butterflies and bugs. 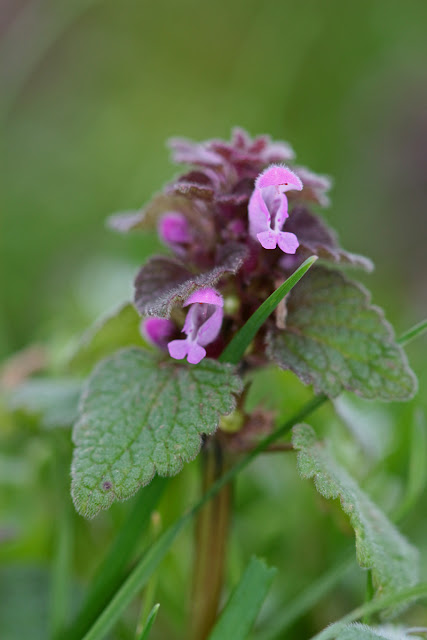 The next part of the blog moves on to 12th March and an area near Cobham, Kent, comprising of woods, open rides and grassy areas, primarily on an acid soil.

There still wasn't too much to see, but Red Dead-Nettles never fail to make me think "Ahhhh"

Very soon, butterflies will emerge from hibernation and last year, Small Tortoiseshells ignored all other Spring flowers in preference for these tiny blooms.

Then below, there is the White Dead-Nettle which can flower all year round. There has been a break of about a month or so where I haven't seen any flowering this year.

This plant is preferred by the Bumblebees and today I saw several Tree Bumblebees feeding on them. 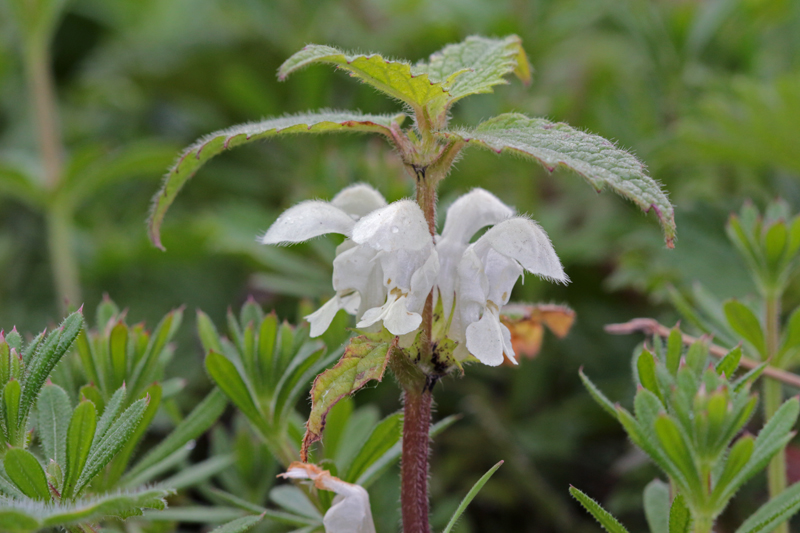 Ivy-Leaved Speedwell is another tiny plant, but it becomes noticable as it form dense mats of flowering plants, often under trees. It's another Spring plant that disappears by May and there are two subspecies to look out for. The first is shown below, subspecies hederifolia. The flowers are relatively large, usually more blue than lilac an the anthers are also blue to deep blue. 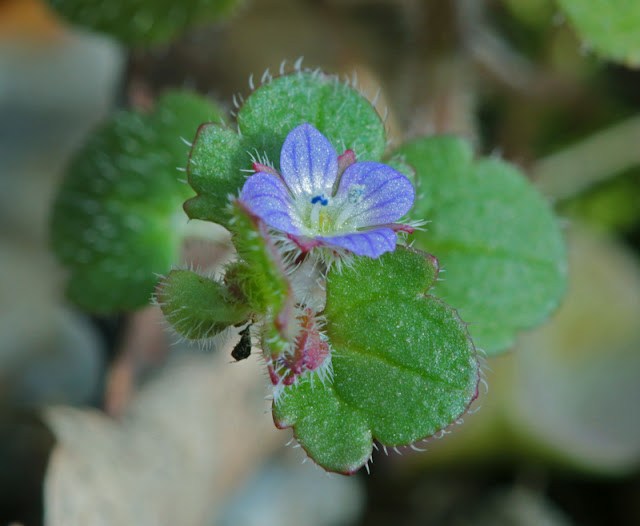 This is the second subspecies, lucorum. The flowers are very small, often pale lilac or even all white, with cream, white or very light bue anthers. Once you've seen both, you'll realise the tiny flowers of lucorum are very distinctive and sets it apart easily from its near relative above 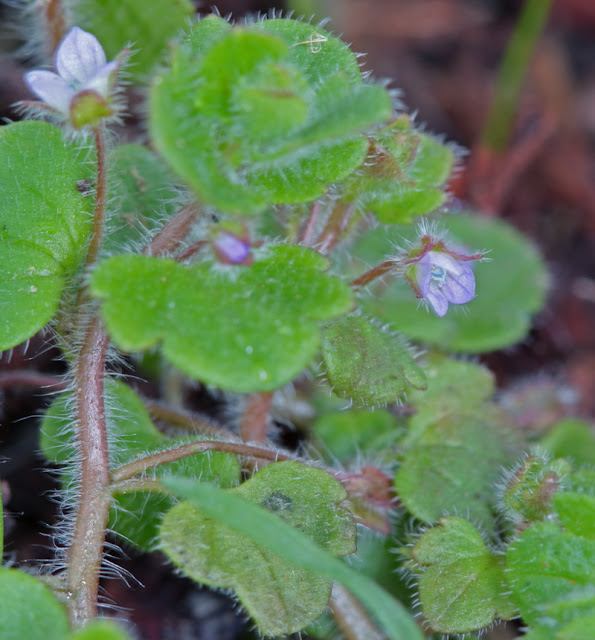 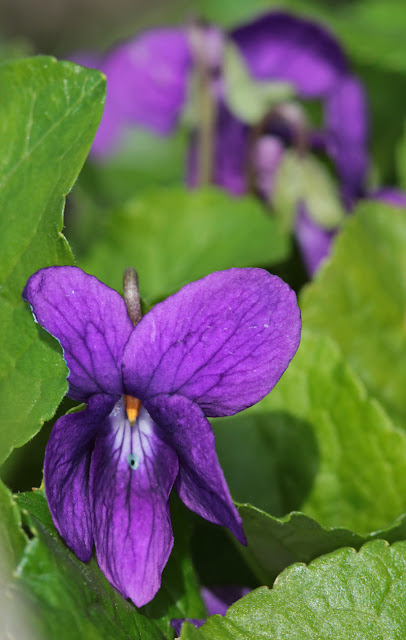 A sure sign of Spring is the appearance of Violets. The first to appear are the Sweet Violets with rounded sepals, leafless stems and heart shaped rounded leaves. There's even a scent, though I've yet to detect it!

I also saw today, a patch of the white colour form which is not that unusual. 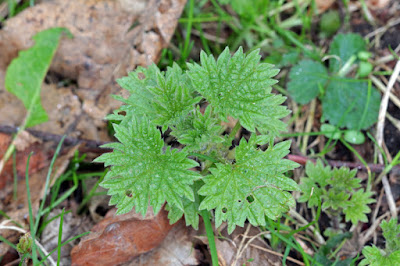 This plant is obviously not in flower, but I've included it to show that even the mundane has a hidden side.

We all know about Common Nettles, usually called Stinging Nettles. Well this is the Small Nettle, which could also be called a Super Stinging Nettle for it is positively adorned with hundreds of tiny stinging needles!

It does look different from the usual Common Nettle. The terminal leaf notch is pretty much parallel to the rest giving it a rounded appearance. Common and Fen Nettles (sometimes called the Stingless Nettle) both have a longer end tooth on the leaves. There are other difference, but the plant needs to be in flower to see them. A while yet! 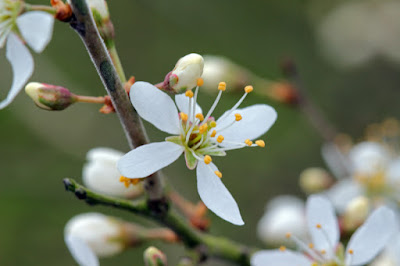 They make a nice display and a fantastic display in some places, such as rural roads on the Romney Marsh.

It will be a while yet before they are at their best. 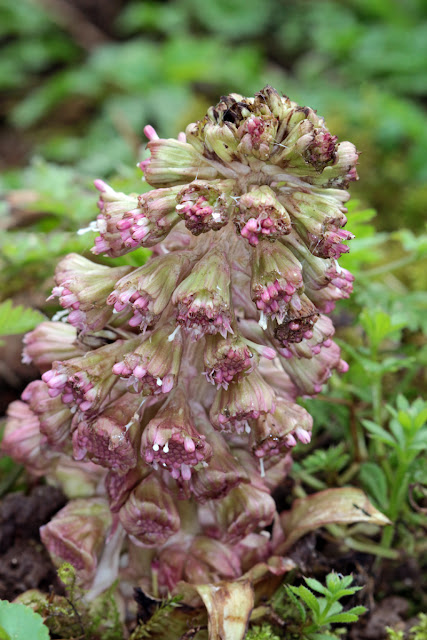 My final plant is just beginning to flower now. It's called Butterbur and grows in damp areas, often areas which flood in the Winter and dry out in the Spring.


You can see it's related to the Wintr Heliotrope above, but this is considered in some places in the UK to be native. It's been around i the wild a very long time in any case. 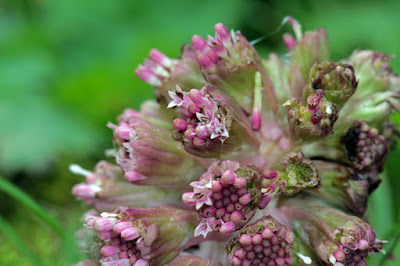 There are of course, many more plants in flower than I have shown and in the coming weeks the list will grow larger until mid Summer when it all starts to slow down again.

Spring is a beautiful time to be in the countryside, why not have a walk somewhere local to you and see nature awaken from its slumber.