- March 18, 2017
Just a few days on since my last blog and the mild weather this last week has brought forth several more delightful Spring flowers, bringing an uplift to the soul after months of Winter blues.

This half day was a visit to the National Trust's Ightam Mote and its estate and nearby Kent Wildlife Trust's Ivy Hatch nature reserve, all in a few hours before work. 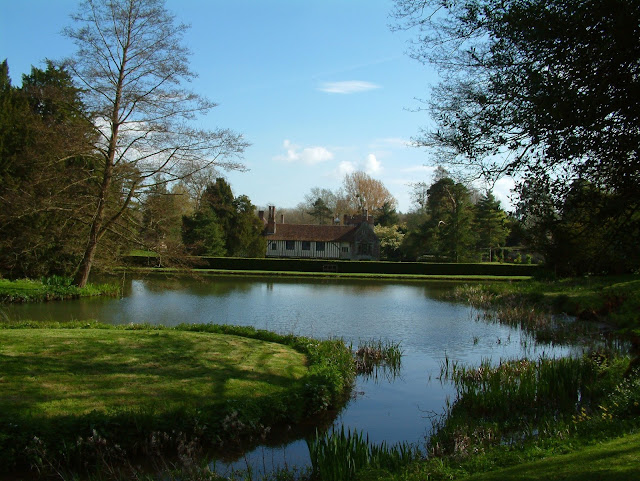 I was hoping to find some early Rue-leaved Saxifrage on the old walls around the Mote but it was too early yet. However, I knew that the boggy streamlets running into the lake would now be full of an early flowering Spring plant. 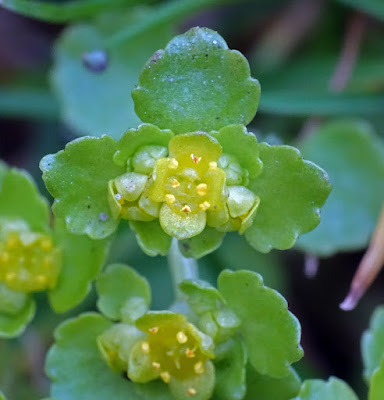 This tiny plant is Opposite-leaved Golden Saxifrage, quite common and easy to find.

It has no petals, but the golden anthers catch the sunlight and look like golden specks of Spring. 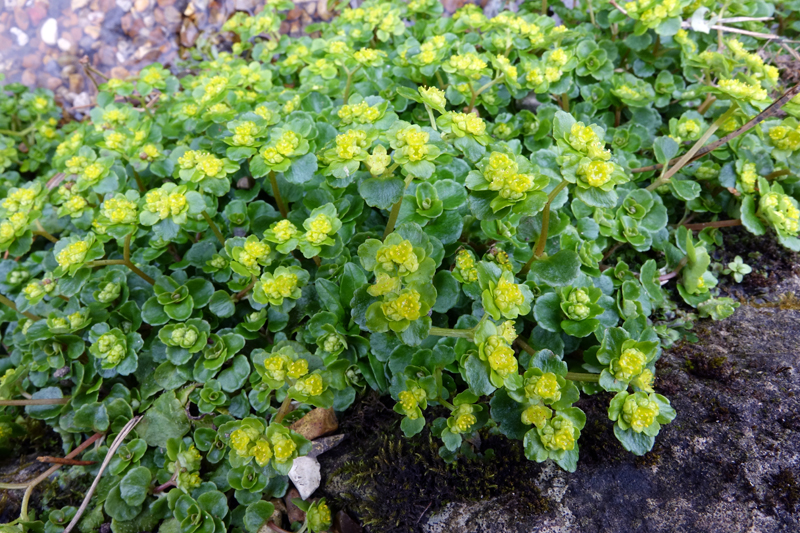 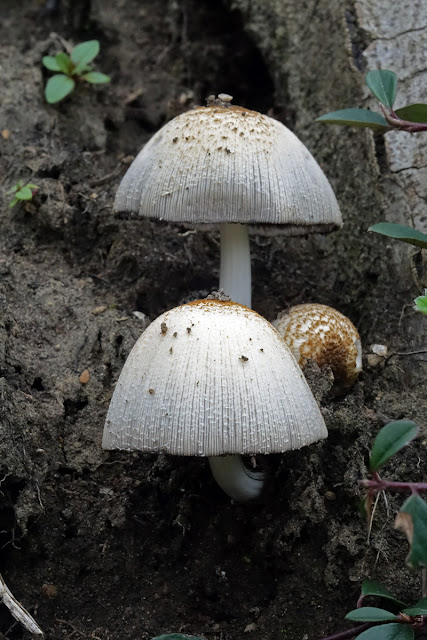 Not quite what I was expecting in Spring, but interesting nonetheless.


I don't have time to identify fungi now, but I'm fairly sure this is a type on Inkcap fungi

The grassy bank below the ticket office was alive with tiny Spring flowers.
Very noticable in the Spring sunshine were patches of Barren Strawberry.
If you go looking for them, bear in mind they're not much bigger than about 1cm across! 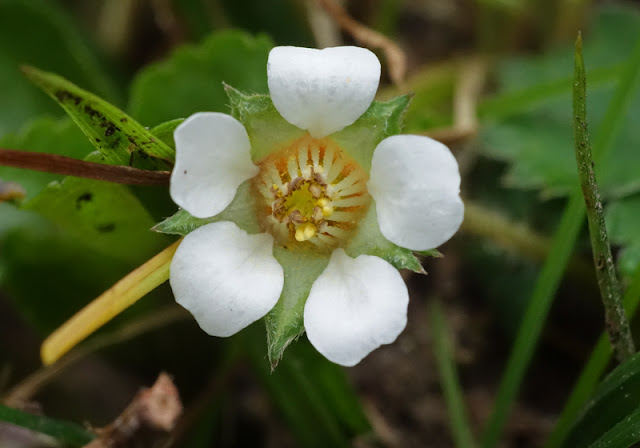 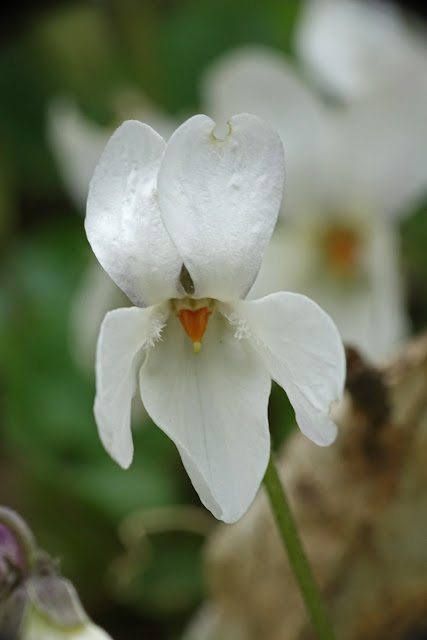 Violets are now coming out in large numbers almost everywhere.

The first to flower is usually the Sweet Violet, which this one is. Most are the usually violet colour, but occassionally you come across white forms like this. There were large patches of the white form flowering here. 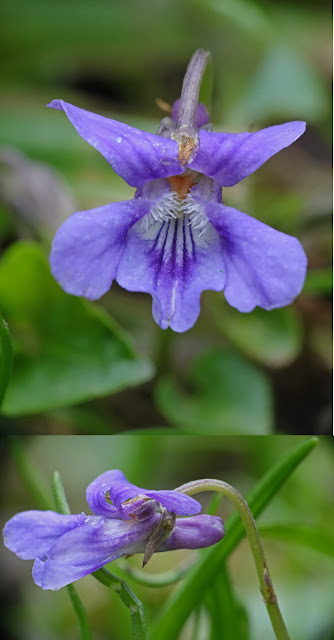 The next Violet to flower is usually the Early Dog or Wood Violet and several patches of this species were also in flower on this grassy bank, along with numerous Primroses as well.


I've included a stitched photo to show the parts of the flower you need to look at to identify these for yourself. Leaves and flower stems are also useful for identification purposes!

Violets aren't really that hard to get a grip with except when they hybridise, then you can get a headache trying to work out what you have found! To help out, I've ordered from the BSBI the Viola Handbook which covers all the hybrids in the Viola family in the UK. I hope it increases my knowledge with Violas, an intriguing and beautiful Spring plant.

The last plant I photographed in the house grounds was this tiny flower that is usually associated with kissing at Christmas! Yes, it's a Mistletoe. This one was about 8' off the ground in an apple tree in the orchard.
Of course, later in the year, the pollinated flowers turn into the familiar white fruits we see at Christmas.  I still wonder how their seeds get into trees; I can only imagine the berries are eaten by birds who pass them while sitting in trees? 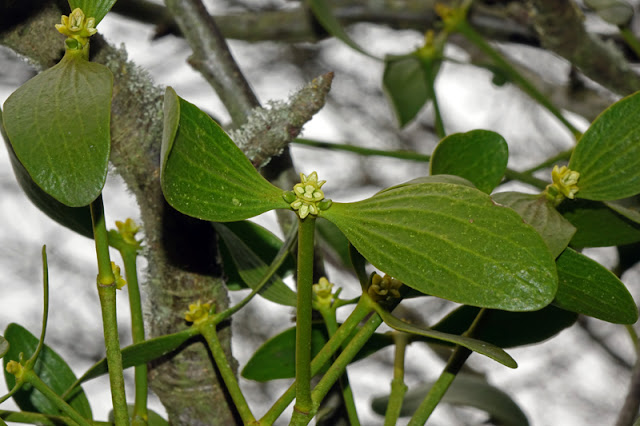 As I drove out of the estate I saw a few more wildflowers had come into flower, so I parked at the top of the hill (where safe) and walked back to see them. 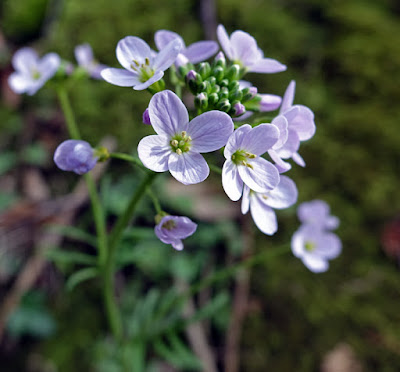 This is the aptly named Cuckooflower (also known as Lady's Smock), so called as they tend to bloom when the first Cuckoo calls are heard.


Since this day, Cuckooflowers are now coming out in force all over Kent and East Sussex, a beautiful roadside flower. 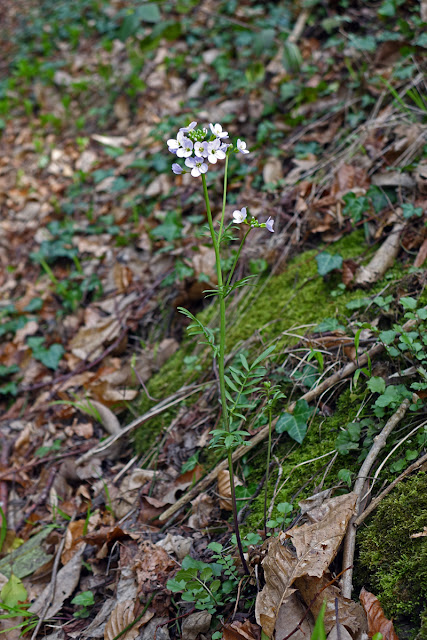 I've included a photo of the complete plant to show its leaves and height. It's usually about this tall (3') but can be only a foot tall if conditions are poor for it. 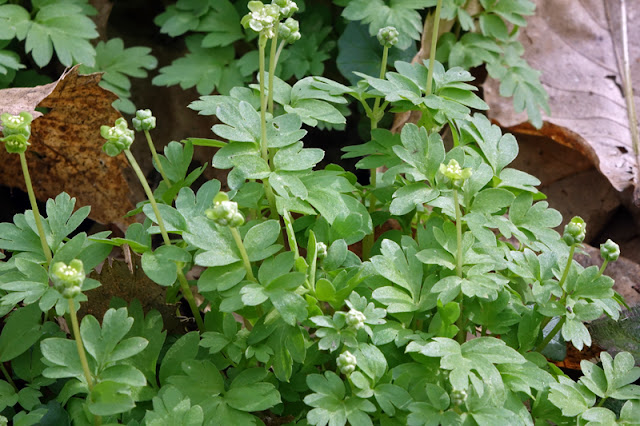 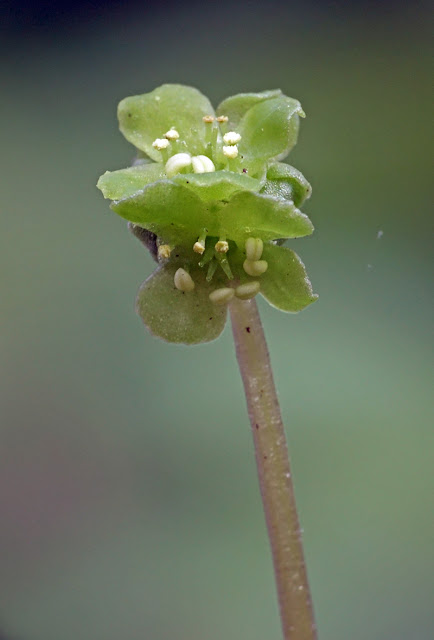 Another flower I spotted from the car were patches of Moschatel, a tiny woodland flower, but the carpets of light green leaves made them easy to find.

Also known as Town Hall Clock with flowers on 5 faces of a cube shaped flowerhead.
Stunning! 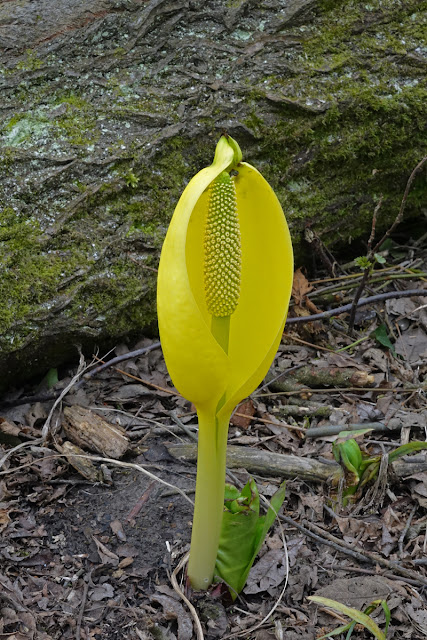 After leaving Ightam Mote, we drove the short distance to Ivy Hatch nature reserve, managed by the Kent Wildlife Trust. It's their smallest reserve, but what makes it special is that virtually all of it is a bog. This is a threatened and rare habitat in Kent.

This venue is well known for its colony of the invasive (and now banned from sale) American Skunk Cabbage, escaped from nearby houses and now running rampant across the bog. See the photo below.

They look like a giant bright yellow Lord and Lady's that are common in our woodlands. 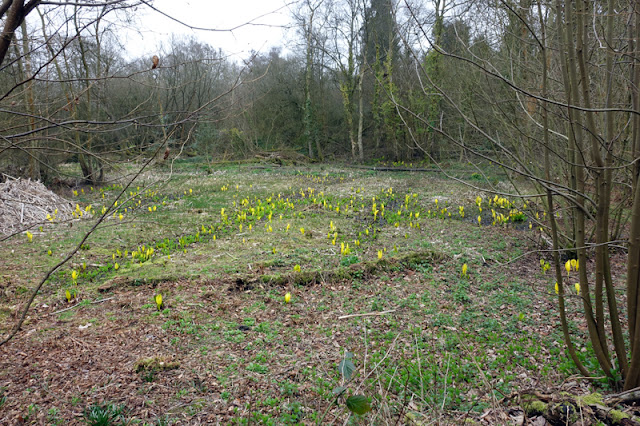 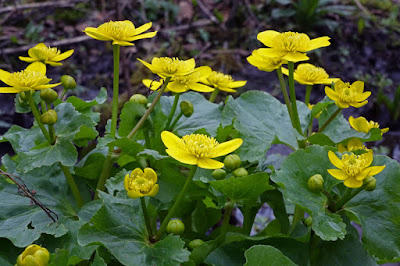 Here and there were bright splashes of another yellow Spring flowering plant, the Marsh Marigold.

For years I only knew it by the name of "Mollyblob" and recall buying one from a garden centre for my pond many years ago.

This is a native plant often found in wet boggy areas, by stream, lake and pond edges in the county. 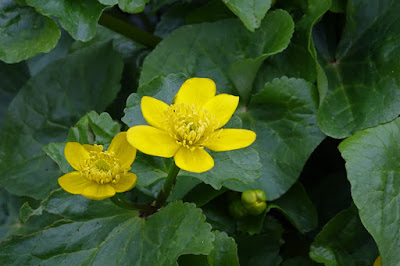 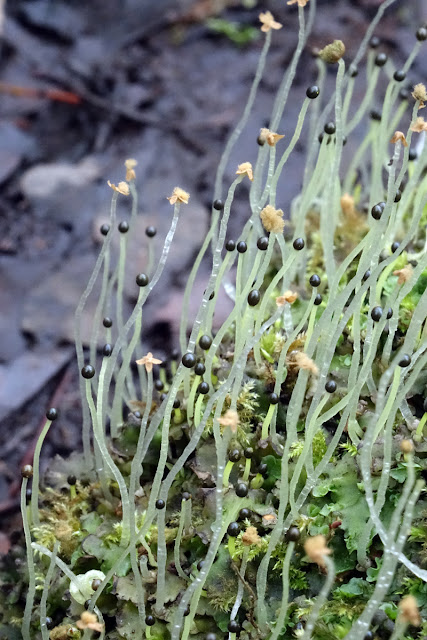 That was it for flowers here, but I did find a large clump of Liverwort fruiting along the bog edges. Quite an odd sight and one I had not seen before.

That concluded our day. However, I will take the opportunity to include a few other recent finds from this week that wouldn't warrant their own blog. 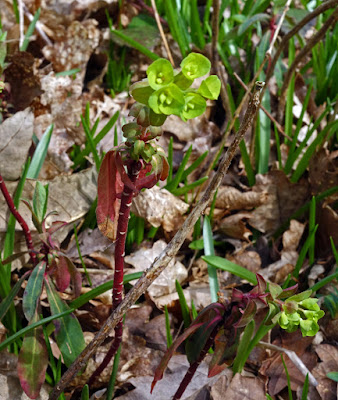 On the 13th March we visited National Trust Emmets near Ide Hill, just for a walk really. This place really comes into its own when the swarms of native Bluebells come into flower - which isn't yet!

Emmets has many unusual and rare ornamental plants and trees, but I tend to photograph only the wildflowers and insects when the opportunity arises.


This is Wood Spurge in flower. It doesn't have petals but the pale green flowering parts are very attractive and various more showy foreign family members are sold to gardeners every year.

And here is the first Wood Anemone I have found flowering this Spring, again at Emmets, yet in the few days since our visit, the country road verges and woodland floors of the county are now carpeted with them, a wonderful sight. 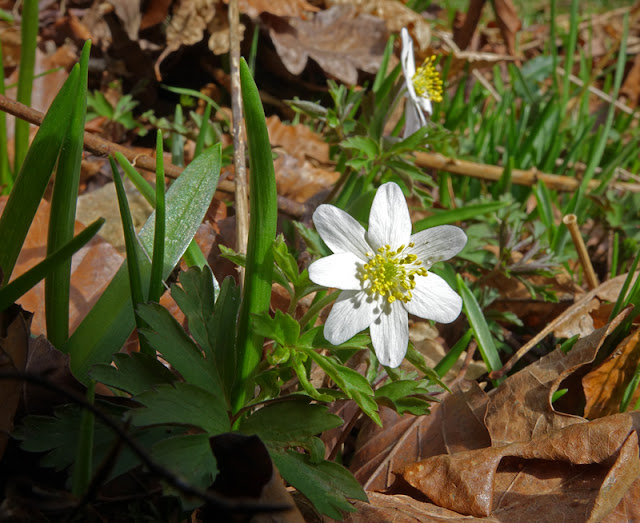 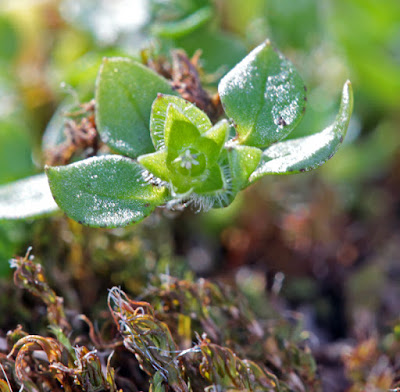 Here's the final flower for the blog, the diminutive, extemely small Lesser Chickweed, found on the 15th March flowering at Bloors Wharf, Rainham Kent. It lacks petals and rarely opens this fully!

Not quite in total focus, but then it's probably 1mm across!

Related to Common Chickweed, it is much smaller and is often noticed as a patch of pale green foliage in short grass. Often found in coastal areas.


So the time for hibernating is over, get out and about and enjoy the Spring wildflowers now coming out in large numbers everywhere.