West Malling is a small quaint town in mid Kent East of Maidstone. It has been well recorded over the years for wildflowers, but the area to the North hadn't, with only a few records from that area to date.

So, this day, I parked in West Malling and walked through the town to a path that headed North out of the town.  Of course, along the way, I made a detour to see the famous Malling Toadflax. This alien introduction has grown on the same ancient wall of a priory since at least 1880, so can count as fully naturalised. However, it doesn't seem to have spread further within the town, which has many ancient walls as suitable habitat. 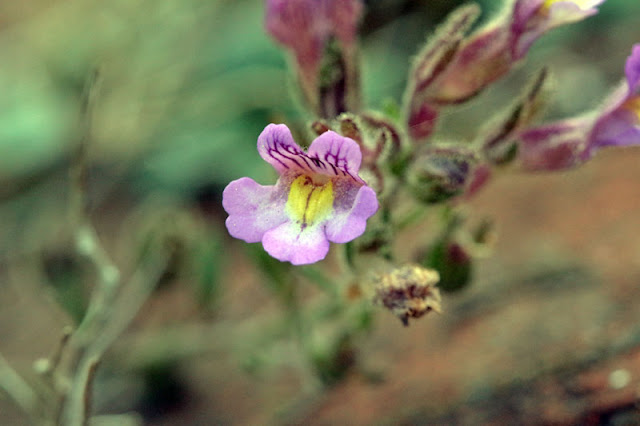 As it is such an unusual and rare naturalised flower, I have included a few photos. 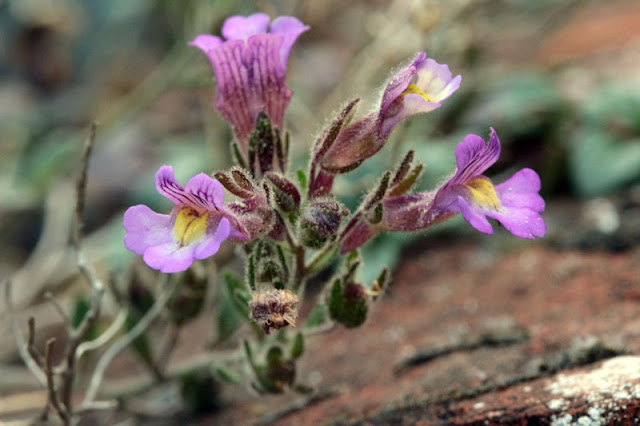 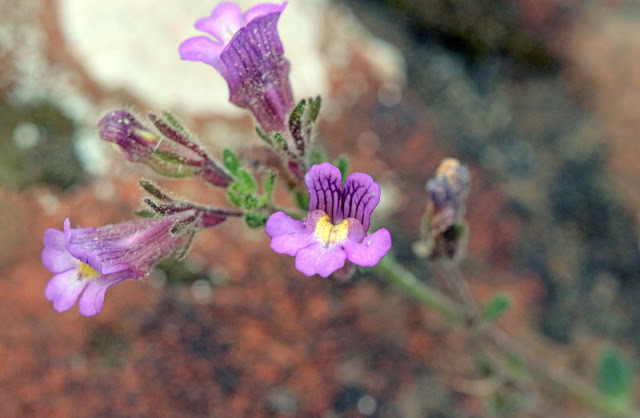 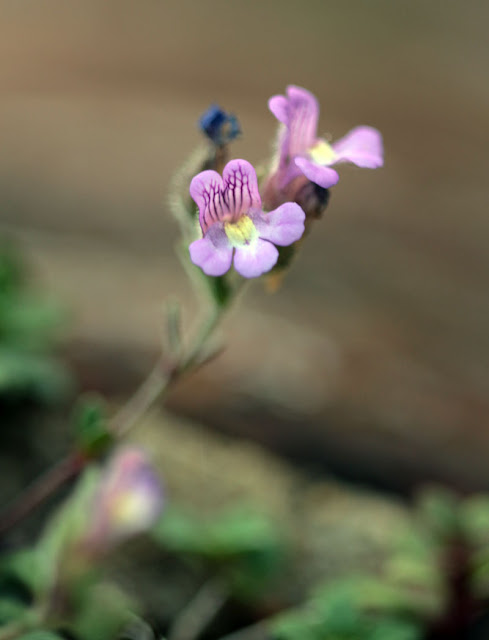 
As you can see, it's quite a bit different from the other alien naturalised wall invader, Ivy-leaved Toadflax. 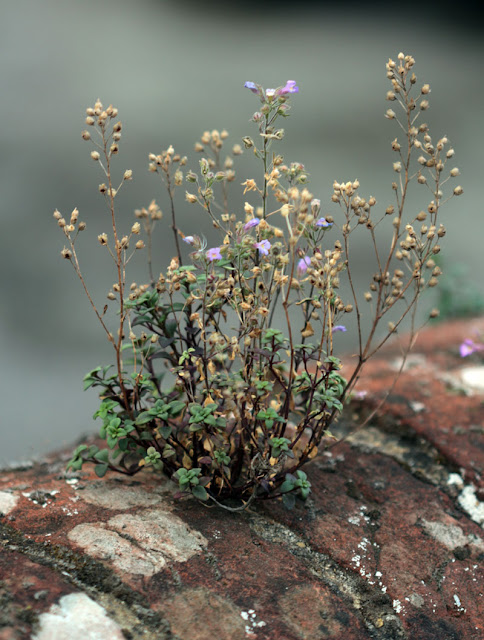 I found another interesting street "weed" on the way out of town. Growing in pavement cracks were some Dwarf Mallow. While this is apparently common, I rarely see it. It does seem to grow better in urban environments rather than the countryside. It even grows by a large building in Sidcup where I work. 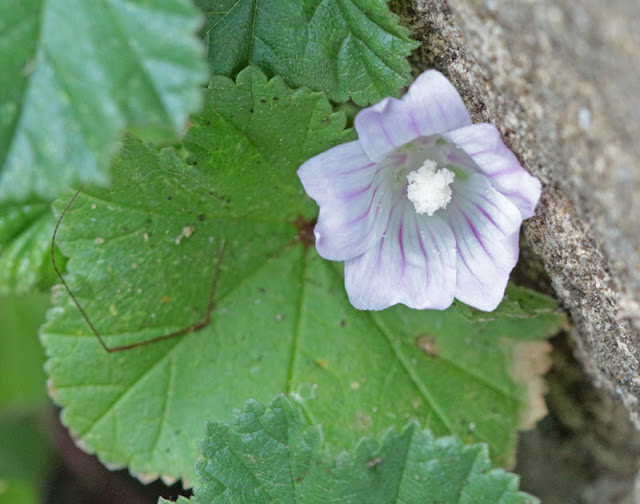 As I left the town I found numerous records in a rough meadow that led towards the A20 including naturalised (and spreading) Snowberry. It's relatively unusual in that you will usually see both flowers and fruits on the plant at the same time, though I do see this phenomenon with Holly and Butcher's Broom as well. 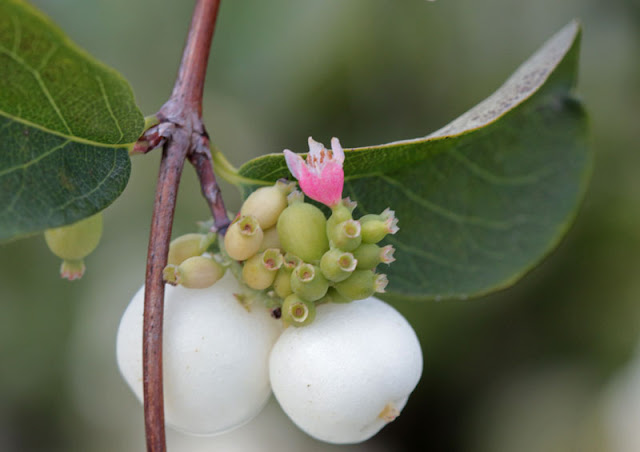 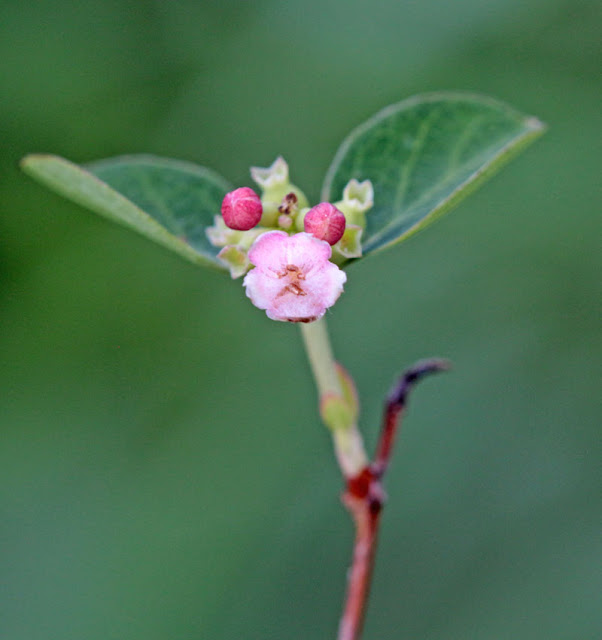 I then came to some rough ground adjacent to the A20, as usual, this type of "waste ground" or old brownfield site had a great diversity of plants and insects.  The most notable plant I found here was a Kent RPR species called Bugloss which has small bright blue flowers on large hairy/bristly stems. 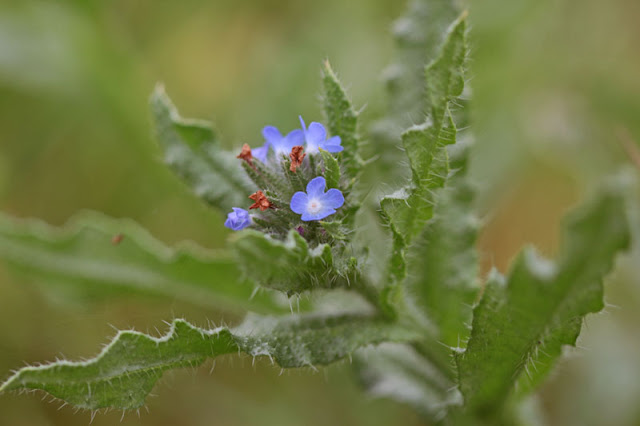 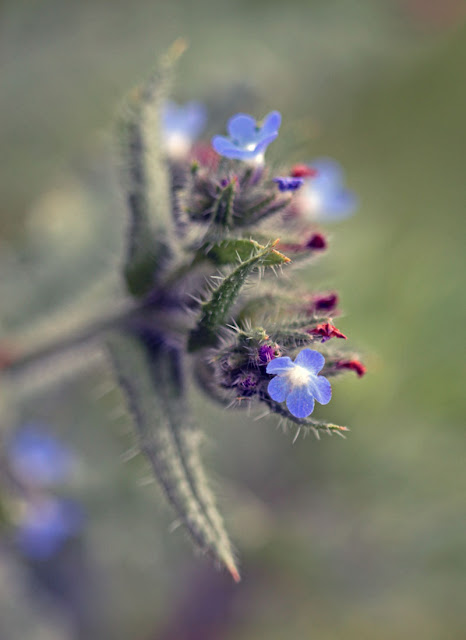 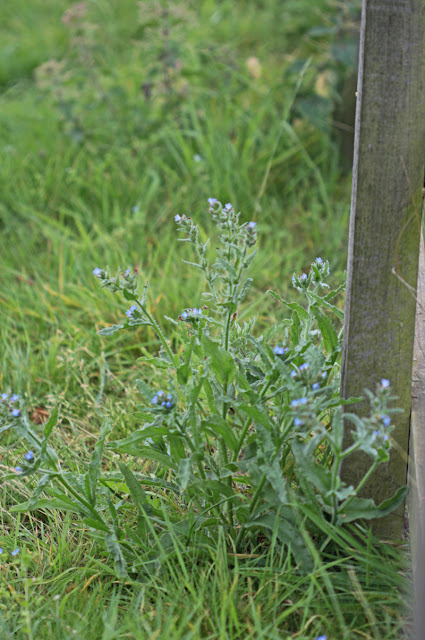 I crossed the busy A20 collecting many more records from its verges and entered Leybourne Wood.

The skeletons of numeorus Bluebells indicated this would be a great place to re-visit in the spring.

A brook ran through the wood creating damp habitats and in gaps between the trees where light could enter, there were plenty of of species to see. Hemp Agrimony, Purple Loosestrife, Gypsywort, Water Mint and many more were found. However, my prize find was Water Chickweed. Not rare, but uncommon in Kent as it likes damp conditions and North Kent is mostly on free draining chalk which remains dry, even after heavy rain. 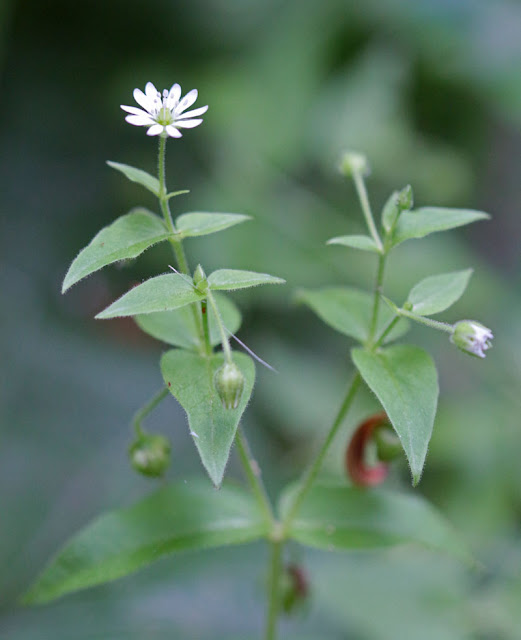 It can easily be separated from Common and Greater Chickweed ( to which it is similar) by the flowers having purple anthers. 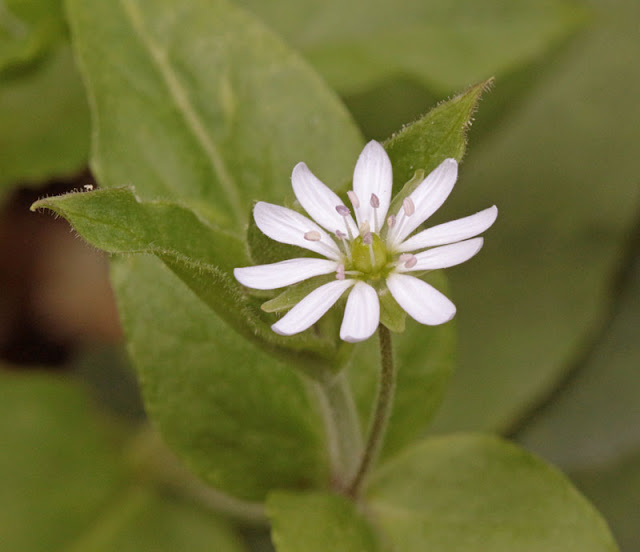 Another nice find and a beautiful plant to boot, was a single flowering Nettle-leaved Bellflower. 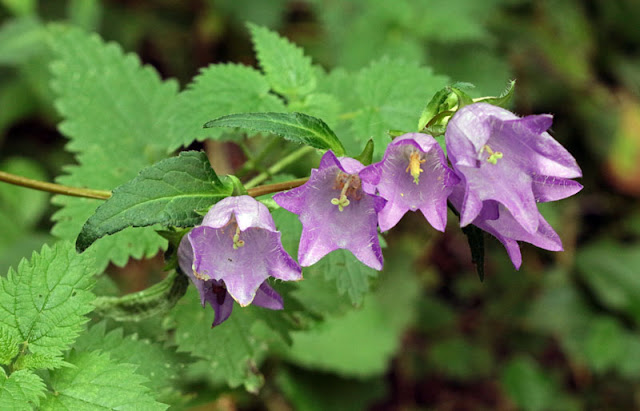 The flowering spike should have been erect, but the weight of the flowers had caused it to fall to the almost horizontal. Not so great for the plant, but it made for a perfect photographic composition and was much easier to photograph than a vertical spike swaying in the breeze! 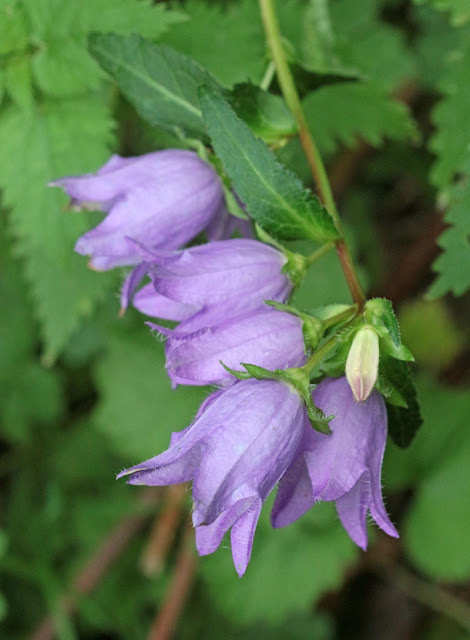 Most likely planted in the dim distant past, I found a large and mature Turkey Oak, an unusual find. I discounted the mature tree as planted, along with numerous Sweet Chestnut trees, but nearby were some saplings, self sown and growing well, so a record was collected for it. If acorns are present, it's very easy to identify as the cups are covered in long thick hairs very unlike our native oaks. If you ever visit Upnor Castle near Rochester, there is a fantastic mature specimen within the castle walls. 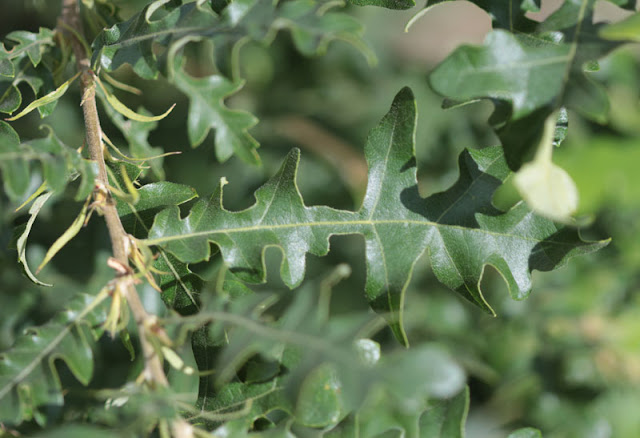 I left the wood and explored nearby areas and found some Climbing Corydalis. Again, this is not rare but is uncommon. I've only ever found it on Hothfield bog and at Dungeness on shingle, so it was a nice find. 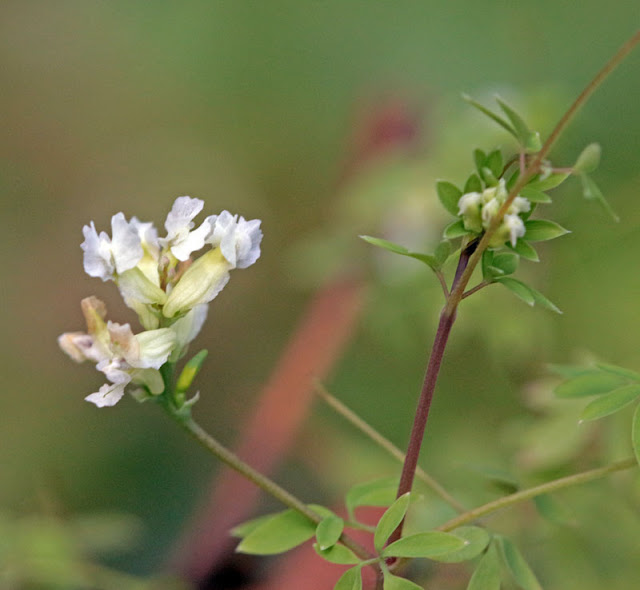 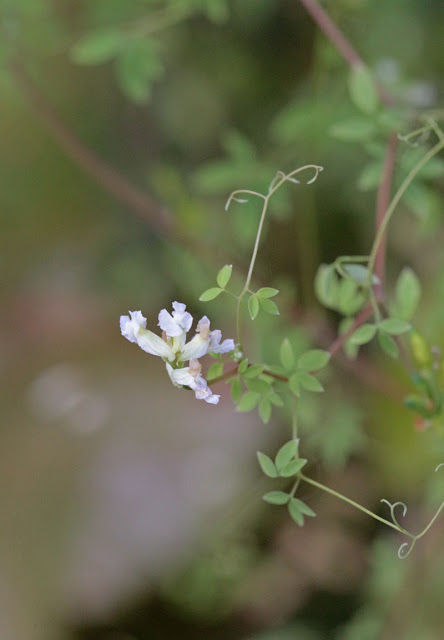 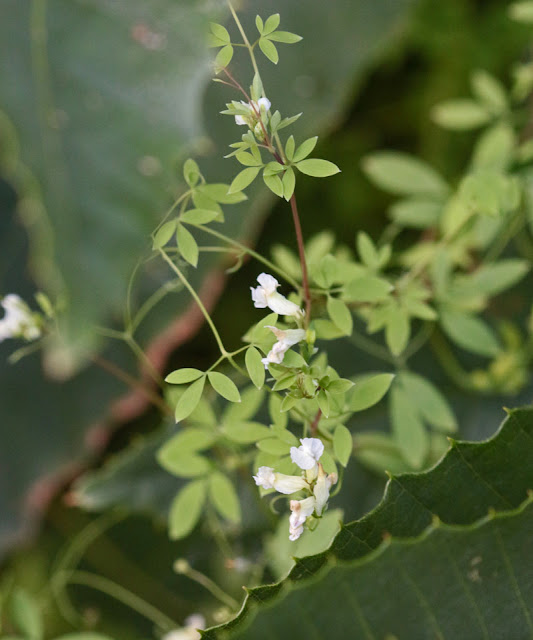 Goosefoots can be hard to tell apart, but the procumbent form and huge amount of seeds made this one below easy to identify.  It's Many-seeded Goosefoot. 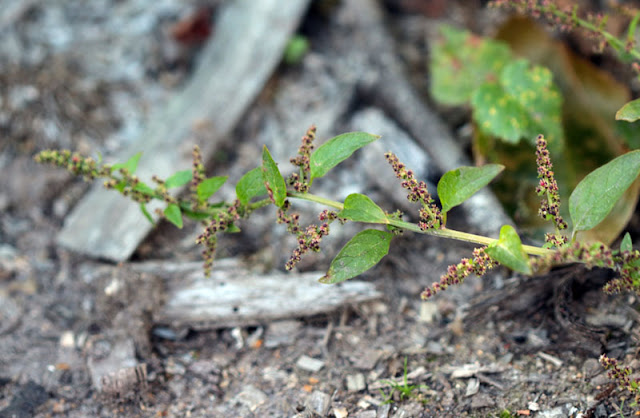 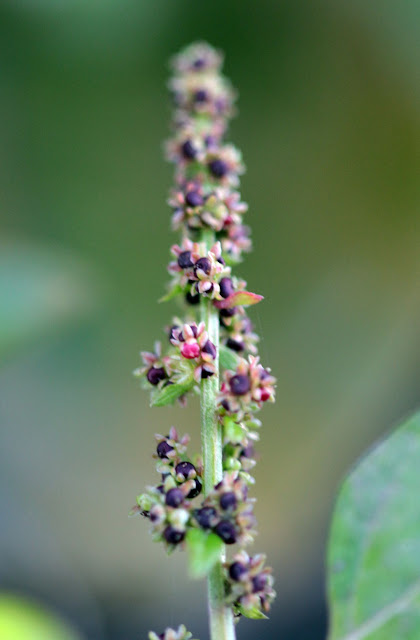 Goosefoots and Oraches are very common but are under-recorded as they can appear very similar to each other.  Take some time to examine every bit of the plant, make notes or take samples and look them up in detail when back home. After a while it gets easier to identify them, I assure you!

On a path verge I found some Red Dead-Nettle. Big deal, it's everywhere isn't it? Well yes it is, but this one was a white form, the first time I'd found this variant. 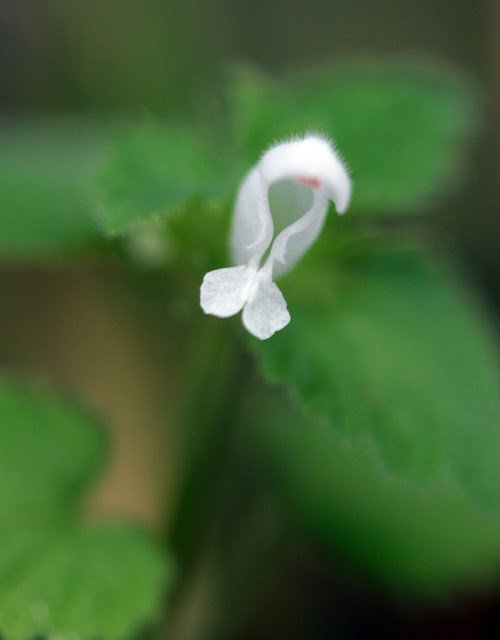 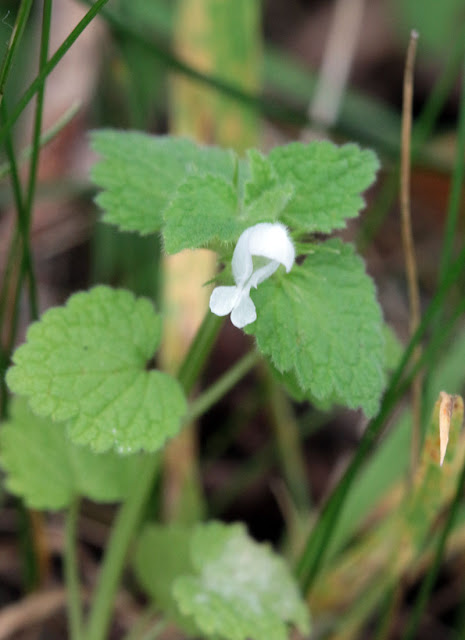 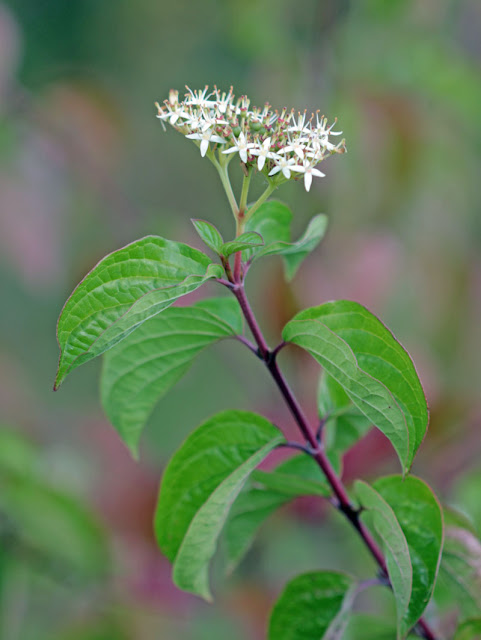 Some Dogwood was flowering. Like many species, it has taken advantage of the warm Autumn and has flowered a second time this year.

Other species currently doing this include Common Dog Violets, Hemlock, Cow Parsley, Primrose and even Cowslips.  There's an arctic blast and frosty nights coming so make the most of it!

Here's a pleasant view from a high point from within Leybourne Wood. Recently coppiced, it gave up numerous botanical records, including Heath Speedwell and Wild Strawbeery, both Kent RPR species. 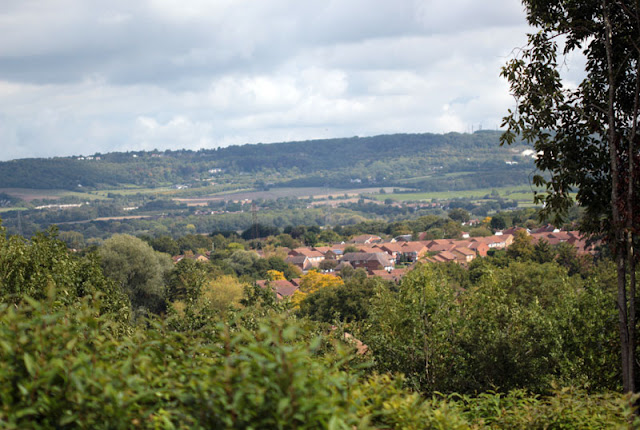 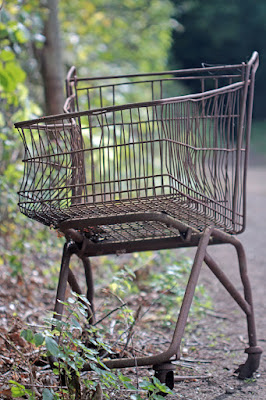 Deep within the woods was this supermarket trolley. It had been there a long time as the undergrowth had already entwined about its wheels. I've no idea how it came to be dumped here or what store it came from. The nearest must be a mile or more away, but trolleys seem to turn up in many remote and weird places.

Dotted here and there were the stately spikes of Great Mullein. A tip with these is to always check the hairs within the petals. They vary in colour depending on the species and as several have yellow petals it's worth checking. Also have a look at the leaves and whether they are stalked or running down the stem from the join with the stem and leaf stalk. 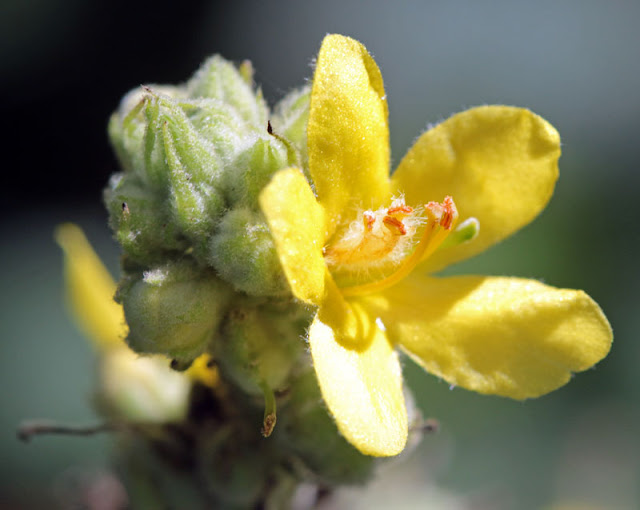 The final plant I photographed was the beautiful Musk Mallow. It's relatively common in North Kent but its beautiful flowers always demand a photo in the hope that one day I will capture it perfectly. 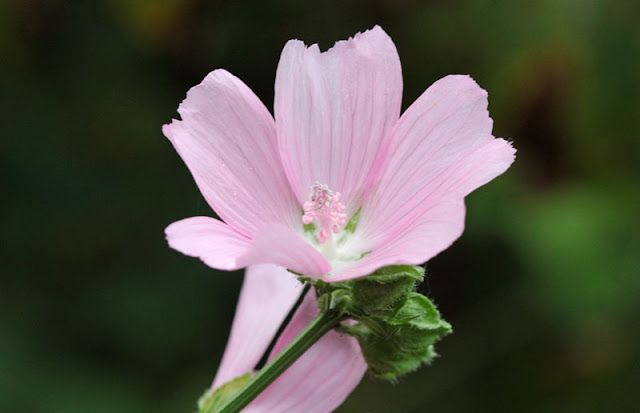 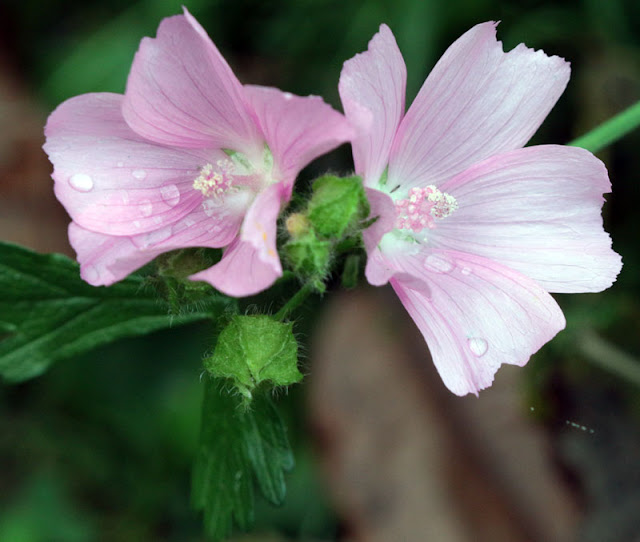 I hope you enjoyed this blog, writing it certainly reminds of the day in question and how elated I felt with each new discovery.