This day was split into two parts, a few under recorded monads near Bridge which is south east of Canterbury, and a monad near Junction 11 of the M20 at Postling Wents.

This area near Bridge had mainly woodland or woodland edge type habitats along with some interesting arable fields. 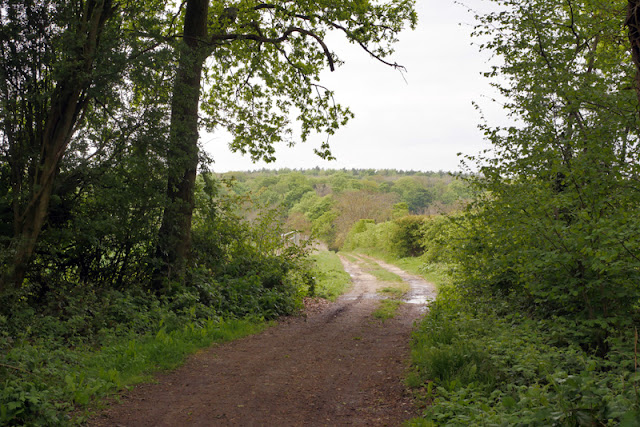 There were plenty of additional records in the arable areas, but I didn't photograph any plants this time. 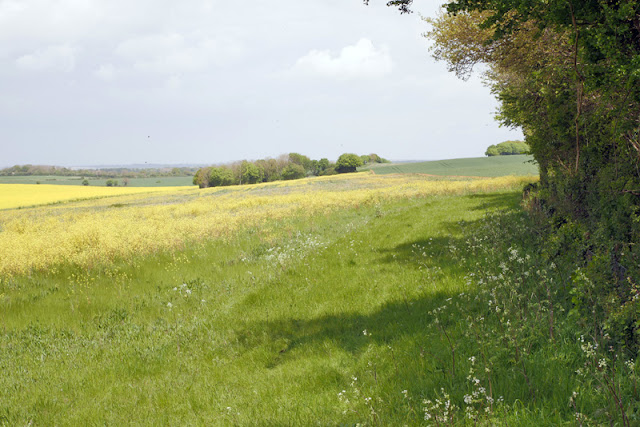 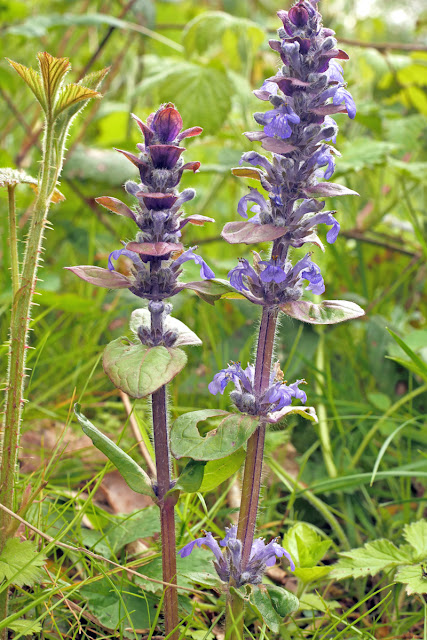 Bugles were commonplace in the woods. I particularly like them as they were one of the first in the family of Lamiaceae I found when I first started out looking at plants.


By now, they were at their best and some were over a foot tall. 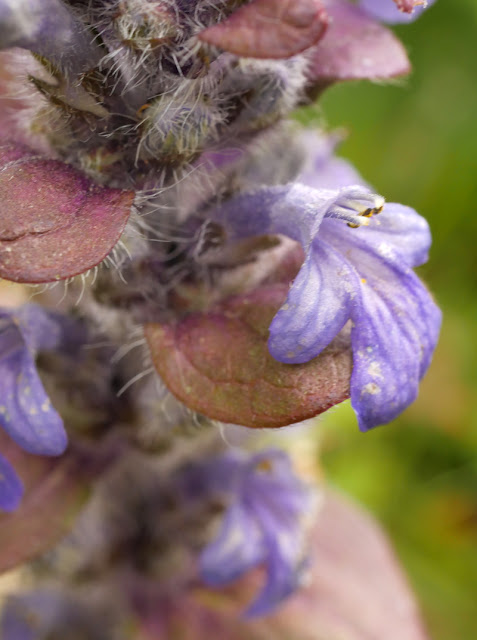 Sadly though, as I write this it is early June, they have all gone over and gone to seed in Kent. So I'll now either have to travel a long way north, or wait until 2020 to see them again in all their glory.

This plant can also produce white or pink flowers, though this year, I didn't see any colour variations. 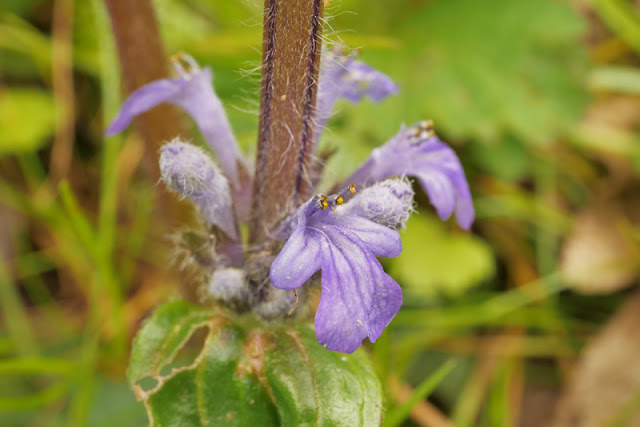 I very much like it when nature decides to do some flower arranging all by herself. Here's a Herb Robert posing with an adjacent Dandelion. 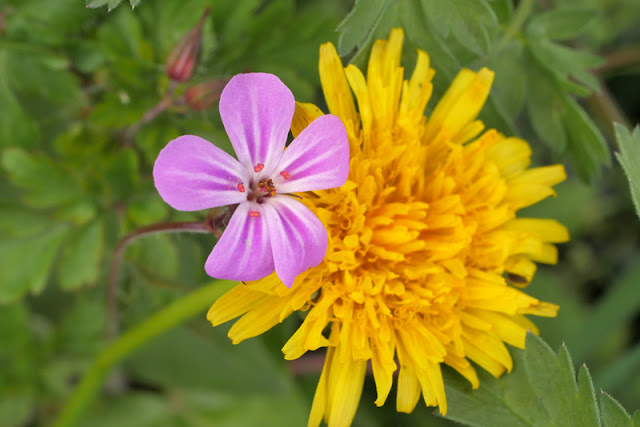 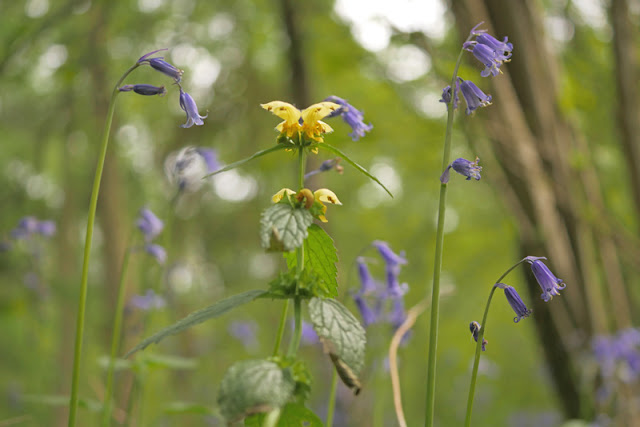 The woodland paths were sometimes lined with the bright yellow flowers of Yellow Pimpernel. 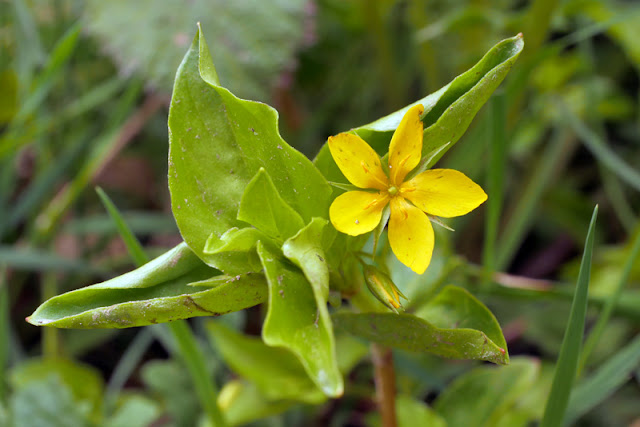 Red Campion is another common but cheerful woodland plant in flower now and probably until the first frosts come. 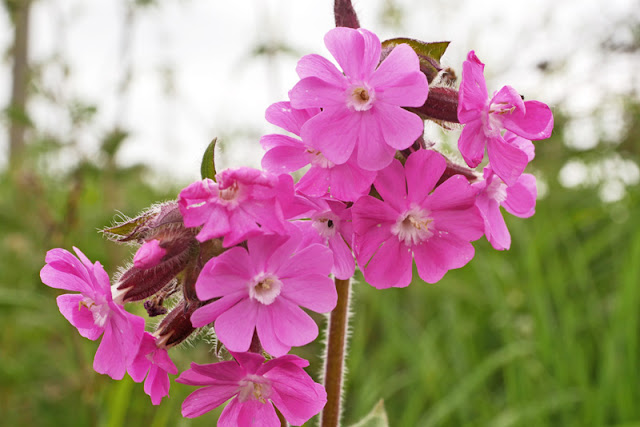 They freely and often hybridise with White Campion as shown here with this pale pink flowered form. Others may have streaks of red and white in the petals. 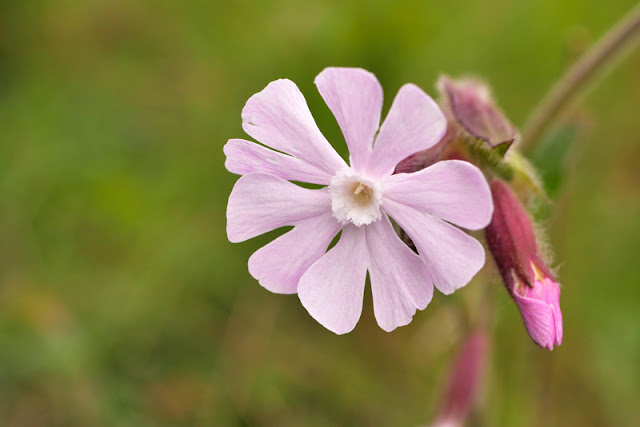 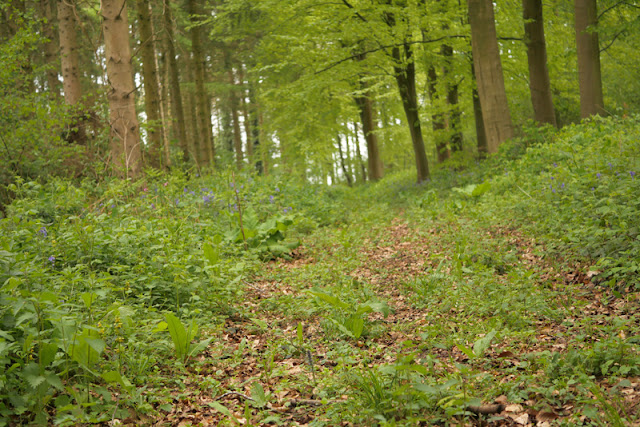 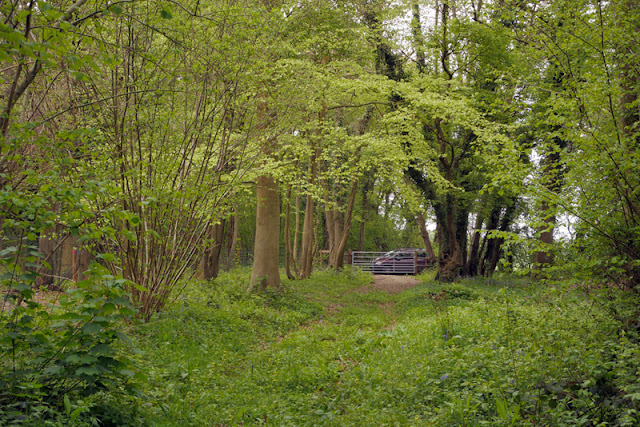 Wood Spurge were in flower, though not very numerous here. The bright green tops to the plant bearing the flowers and the darker green the over wintered leaves. There is a bushier garden subspecies called Ssp. robbiae which sometimes escapes into the wild. 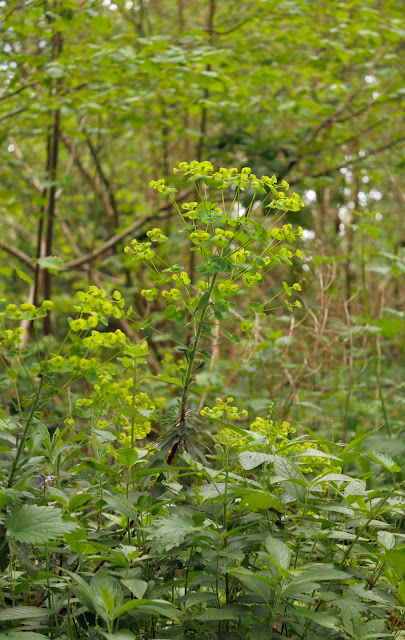 Things then got very interesting.

As is often the case, I began to notice several Common Twayblades, a common and rather dull green orchid. however, where these grow, other orchids often do too. After a few yards, there were over a huundred Common Twayblades. 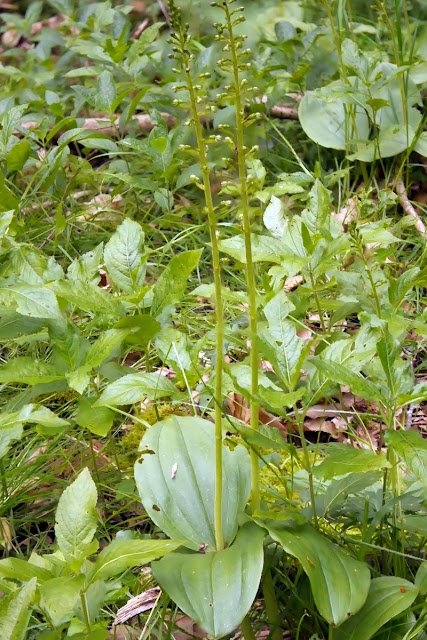 And then, under some very shady Beech trees, I saw this: 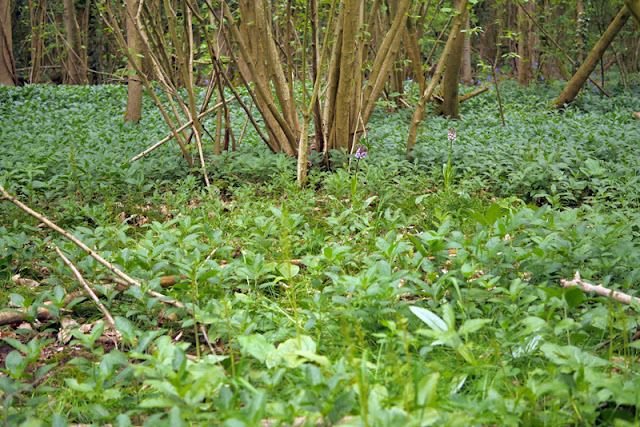 Yes, a sea of Dog Mercury, with the occasional Twayblade thrown in, but there were also Lady Orchids; the Lady of the Woods in Kent and a delight to find.

I counted around 20 flowering plants and a similar number that were rosettes only. I later found out that these had previously been recorded, but not for some years, so it was nice to find they were still doing fine. Of course, this find demanded lots of photographs! 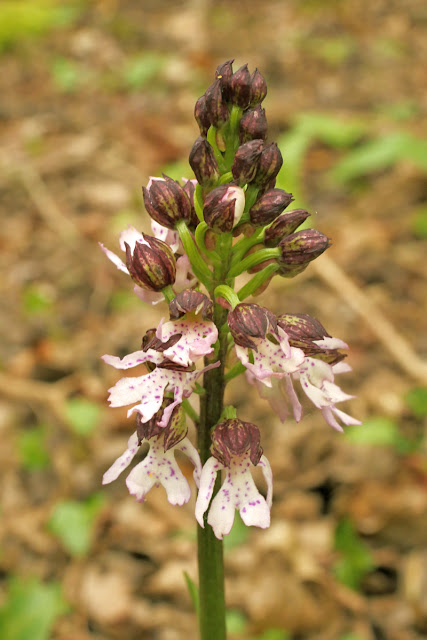 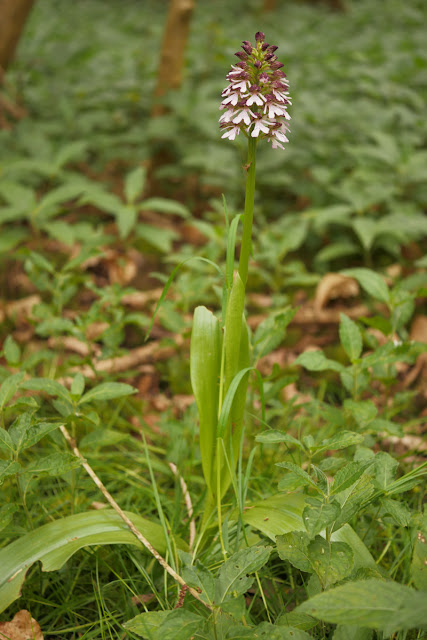 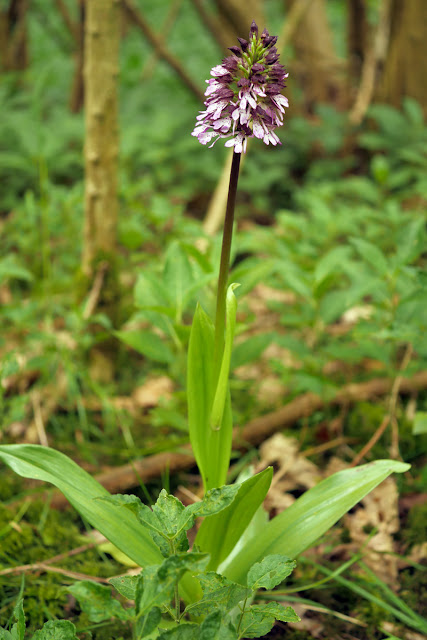 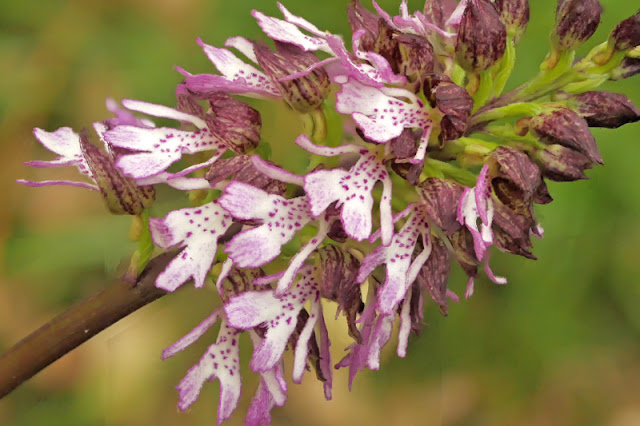 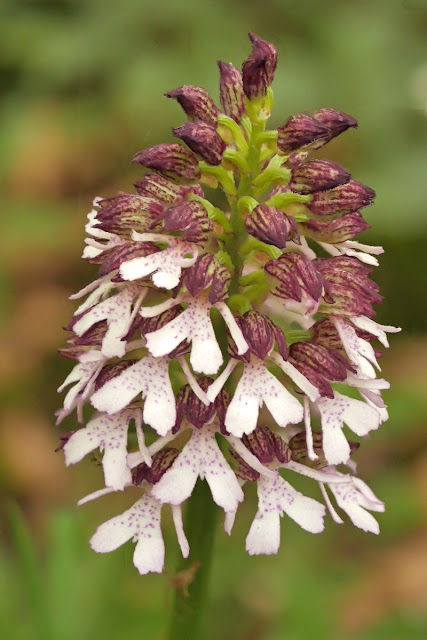 Possibly the showiest and most attractive of our native wild orchids, although the matter is of course highly subjective.


In such situations, be very careful where you tread. The light is poor and under the canopy of (usually) Beech and Yew, it is perpetual gloom. It is very easy to then tread on a Lady Orchid, or other rare plants such as Fly Orchids that go virtually unseen until it's too late. So please tread very carefully. 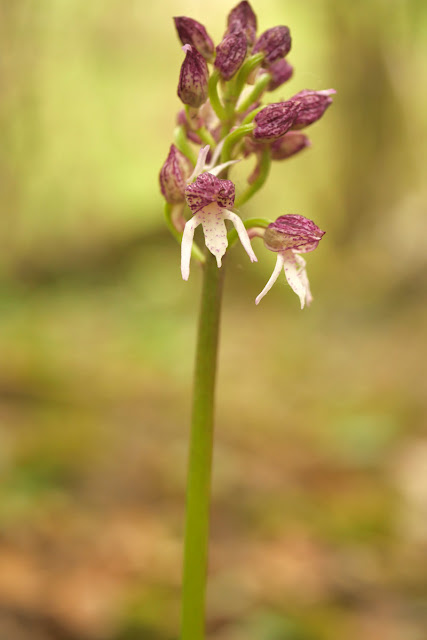 There was only the one aberration and it was this "legless" Lady, missing her lower "legs". As the flowers were just opening, it was too early to say whether this was a genetic defect in the flower or whether something had bitten them off. interesting nonetheless.


On the way back to the car I found some Common Rockrose on the edge of a wood bathed in sunlight, a Kent RPR species (due to rapidly declining habitat). 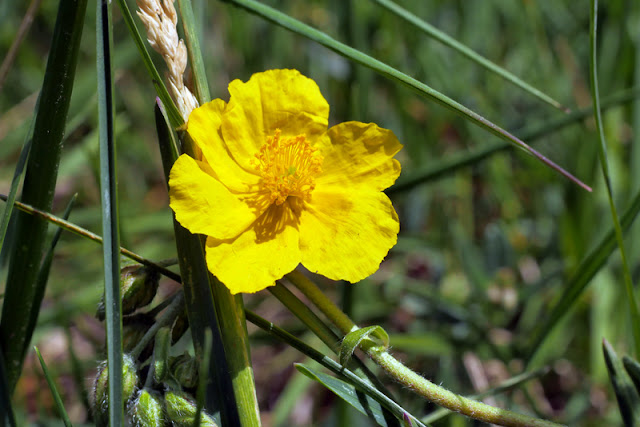 I had amassed well over 100 records for each monad I had passed through and it was time to move on.  I then drove south to Postling Wents near junction 11 of the M20 where I found another 100+ new records and took a few photos. The area included another wood, some ditches, some arable and a main road verge.

On the latter which was very sandy, I found several Common Cudweed rosettes beginning to grow. These will flower from June onwards and are another Kent RPR species. 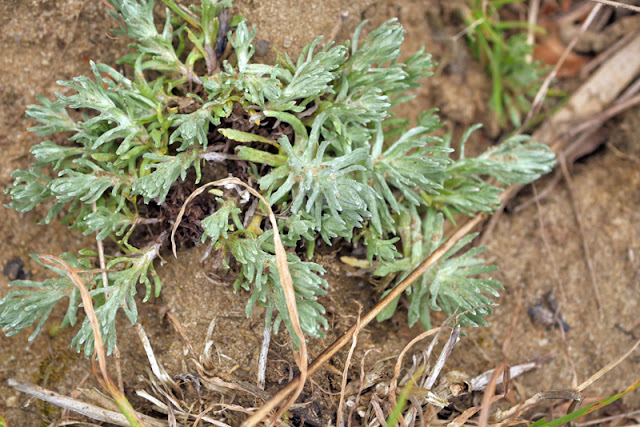 Along the road verge, and predictably not too far from a house and garden were stands of Green Alkanet with its confusingly bright blue flowers. 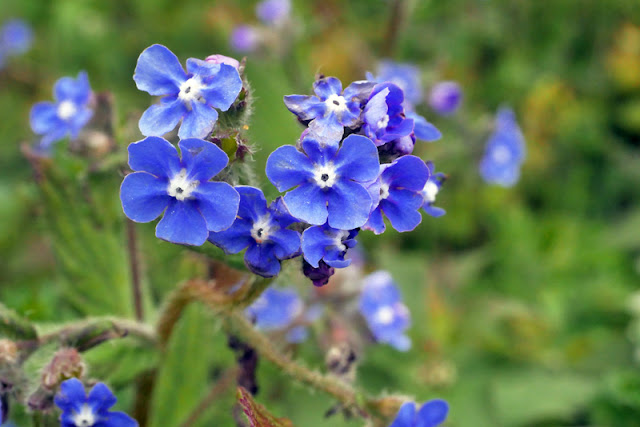 Goatsbeards are a tall dandelion like flower but they close up around midday. There is a garden escape almost identical but with purple flowers, called Salsify. So if you find one all closed up look at the tip to see the colour of the petals: yellow = Goatsbeard; purple = Salsify. Sometimes you have to gently prise open the top of a sepal to see it. Sometimes though, they hybridise with each other!

Also known as Jack go to bed at Noon. 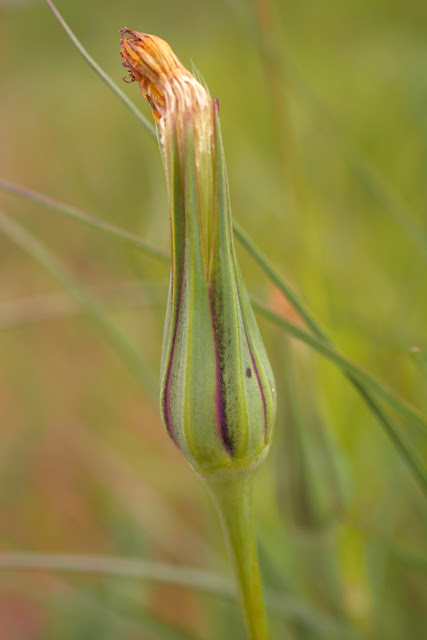 The arable field edge gave up plenty of records as it was unsprayed, but prevalent here were stands of Field Pennycress with its coin shaped seeds being very eye catching. 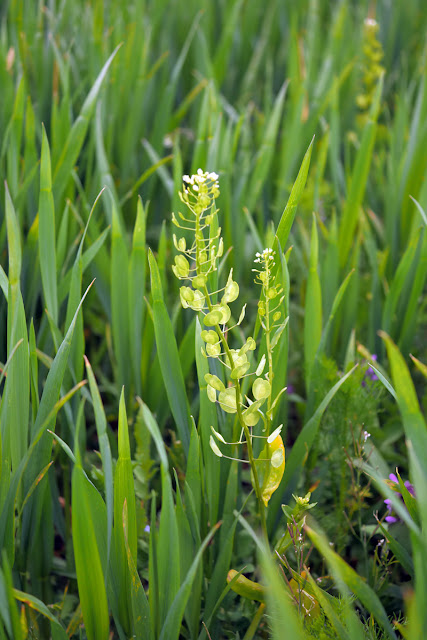 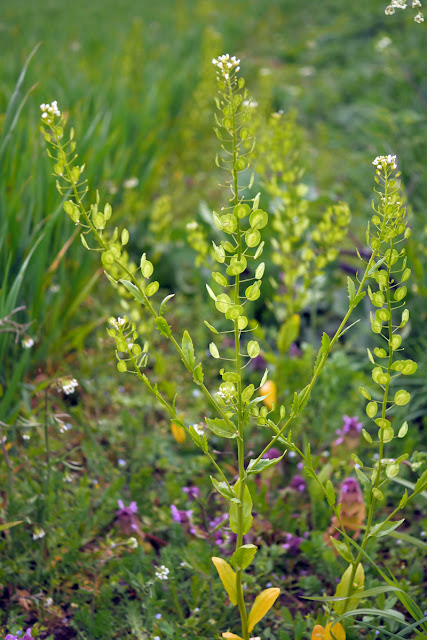 In late Spring, Common Vetch is so common and found almost everywhere, that it tends not to get photographed. However, it is an attractive plant with nice showy flowers, though often somewhat small. 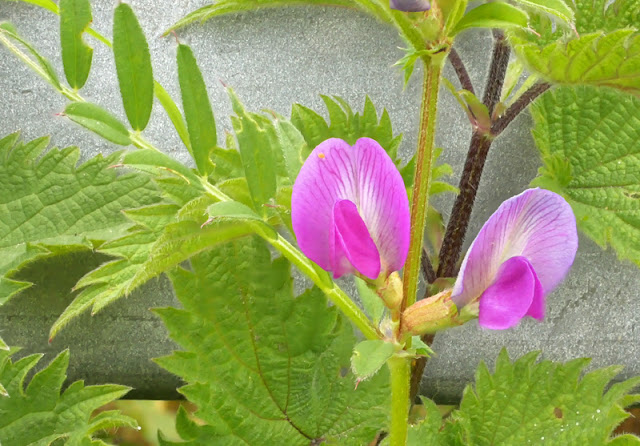 My final offering this day was the dainty Field Pansy. Its delicate flower belies its strength as it can easily survive moderate spraying with herbicides, poor compacted soils and drought. 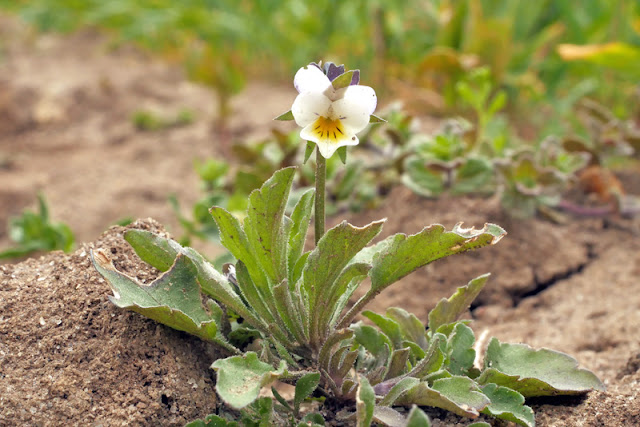 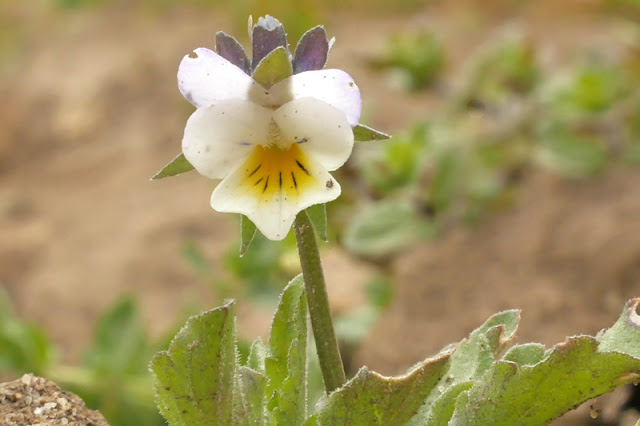