The North Downs around Luddesdown is in an area of outstanding natural beauty with steep rolling downs and patchworks of fields and copses. It was here I chose to explore and expand upon the botanical records for the area whilst I was there. 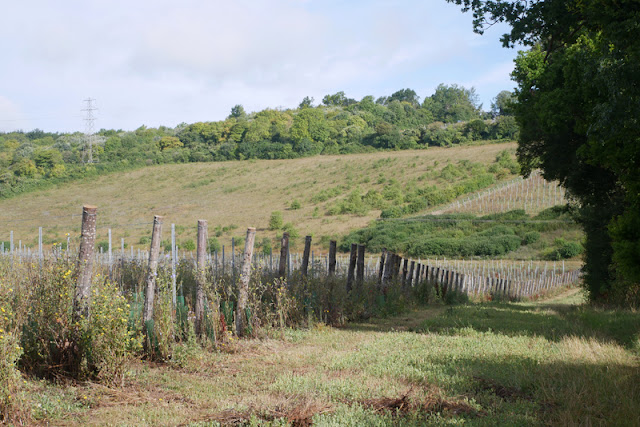 Chickory is unmissable as it is a big plant with big blue, showy flowers. It's becoming quite rare in England and is on the Kent RPR (rare plant register) so as to monitor populations. There is some debate over whether it is an archeotype or native, though I think in Kent it probably is native. I am sure if this species were simply from cultivation it would have died out many years ago. 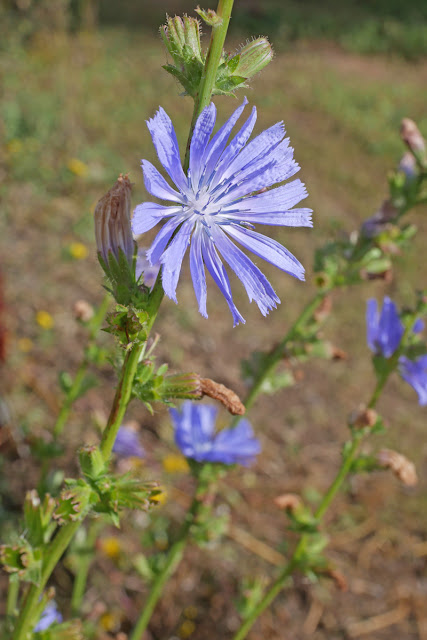 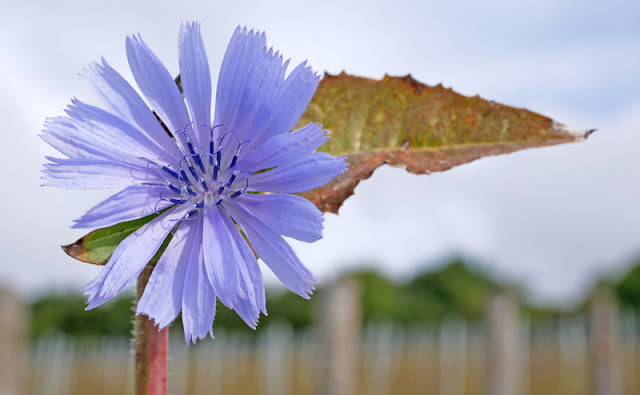 Borage was found growing as an arable "weed" amongst farmed fruit bushes. Most likely sown as ground cover, but this species does tend to pop up along roadsides and field edges occasionally. 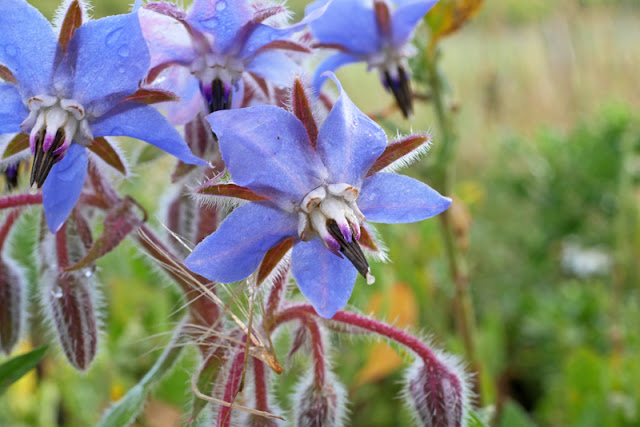 A quiet country lane meanders through this area and its verges are home to many wildflowers including these beautiful Nettle-leaved Bellflowers. They grow to around four feet tall and have multiple quite large flowers up the stem. As the name suggests the leaves are nettle shaped ( see photo below). 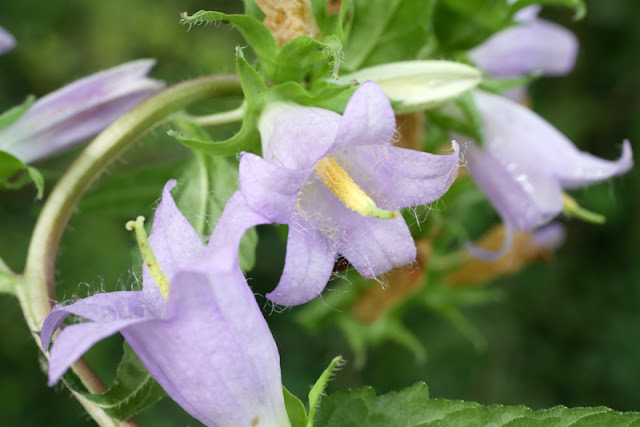 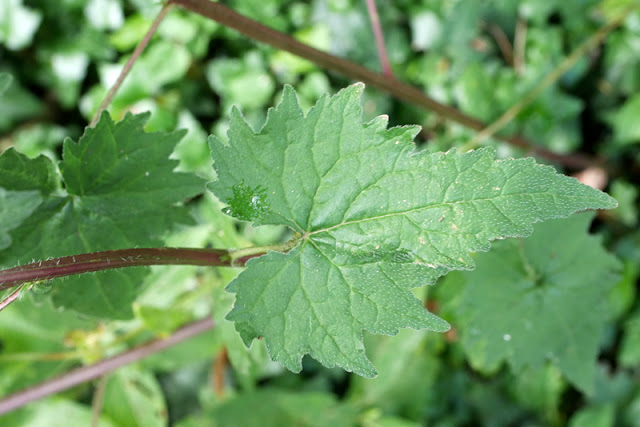 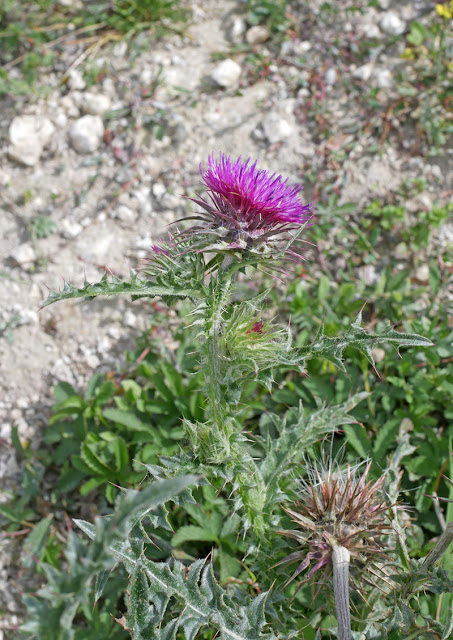 Thistles sometimes get bad press, especially the very common Creeping Thistle which can be a pest at times. However, this beauty is not at all common and is a Musk Thistle.

I particularly like the massive stiff bracts under the flowerhead, they are very sharp as are the spines on the leaves, so don't go sitting on one now!

I do like the Violas as they can always throw up a surprise as here. Growing side by side on an ex-arable slope was a Field Pansy (small flower) and its hybrid with Wild Pansy (larger flower). I am finding this hybrid more and more yet I fail to find the Wild Pansy parent. I guess there must be some around but I rarely find any. I would advise buying the BSBI handbook for Violas to properly identify hybrids. Although they are generally obvious to the eye, it's always worth checking features from the books to see what you really have found. In this case below, the larger flower has long petals exceeding the length of the sepals and the flower structure is somewhat 3D and not flat as would be expected in Wild Pansy. 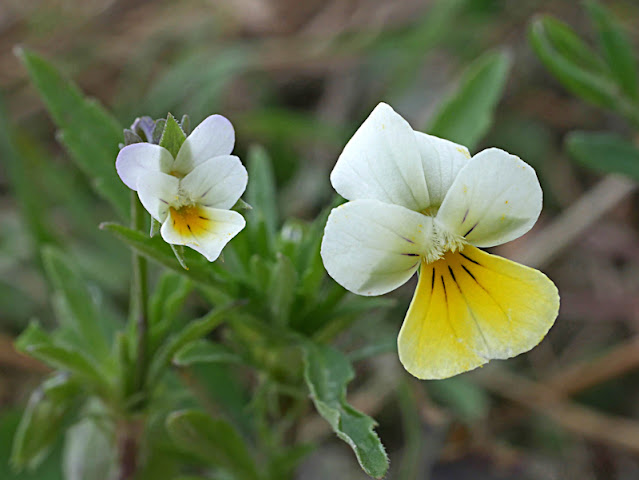 Round-leaved Fluellen was also in the ex arable field with its stunning but tiny flowers and large round leaves. I always notice the leaves first from a standing height as the flowers are only a few millimetres across and not easily spotted.
Kickxia spuria 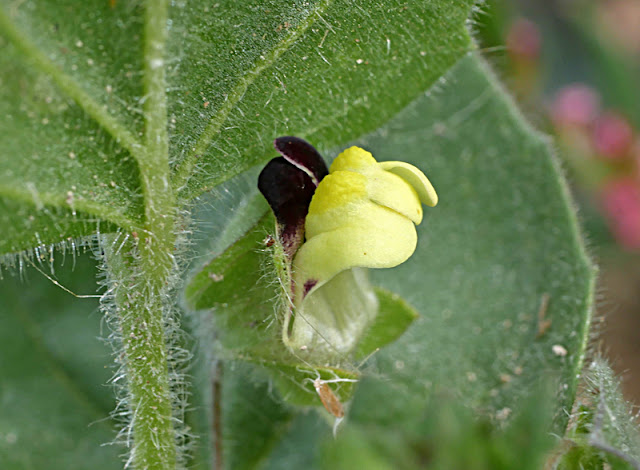 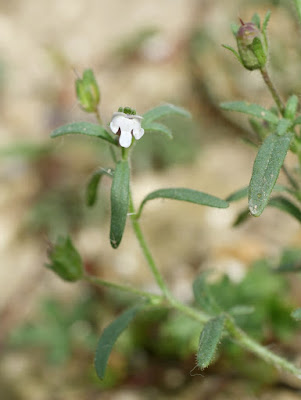 Small Toadflax from the ex arable.

The plant isn't small but the flowers are. If you look very closely with an eye glass they are usually tinged pink. 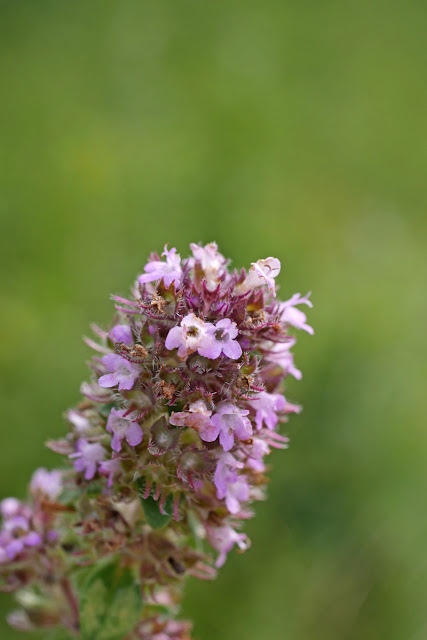 Large Thyme and Wild Thyme have virtually identical flowers. Both can be very small, low to the ground and to some extent form mats.

Sometimes they even grow next to each other (wonder if there's a hybrid?), both grow on the chalk here, and both smell of Thyme when crushed, so how does one tell them apart properly? 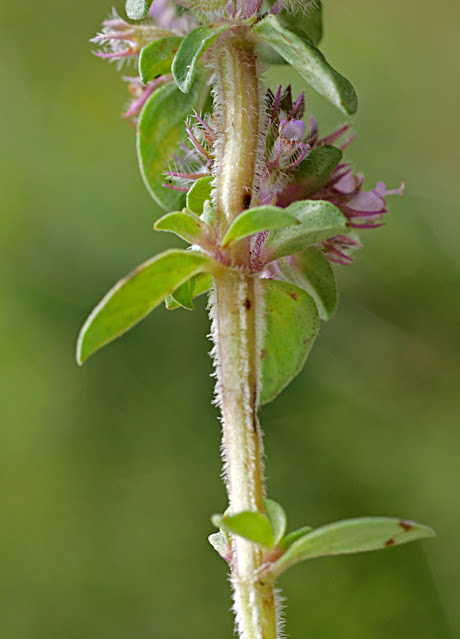 Well, these plants were unusually obliging as they were taller than usual allowing easy access for the camera to photograph the stem, as that is the key to separating these two species.

Ploughmans Spikenard is a tall bushy annual plant with a head of small yellow flowers. It's relatively inconspicuous as the flowers lack ray petals.

https://www.botanical.com/botanical/mgmh/s/spiplo79.html  gives more detail on the uses for this (and other) species over the millenia. 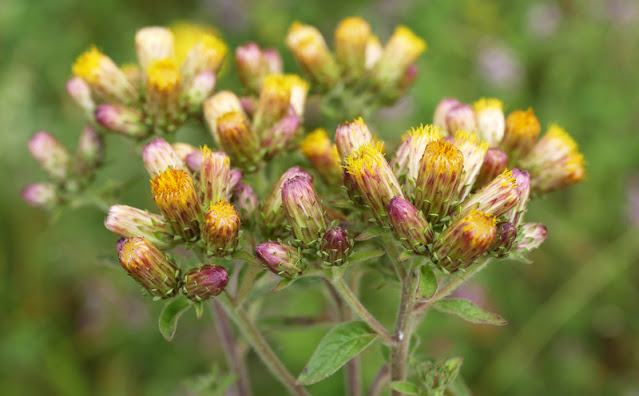 A field edge had a fine display of Field Scabious with the usual lilac coloured flowers interspersed with the white flowered variant. 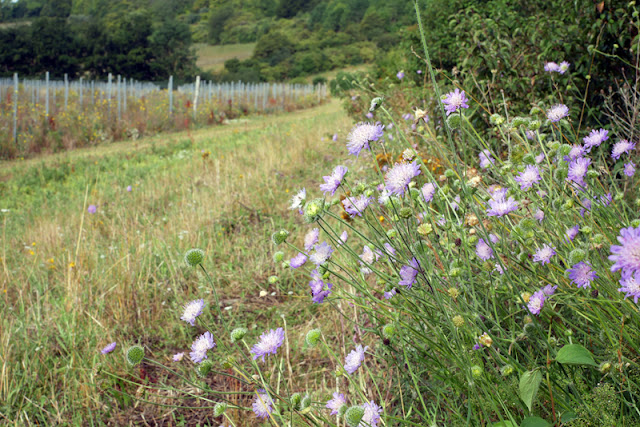 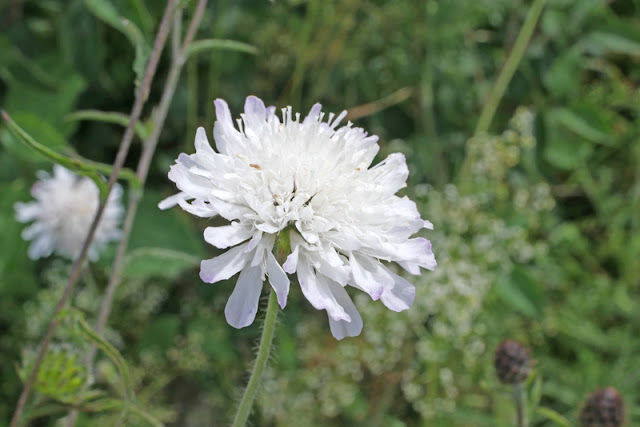 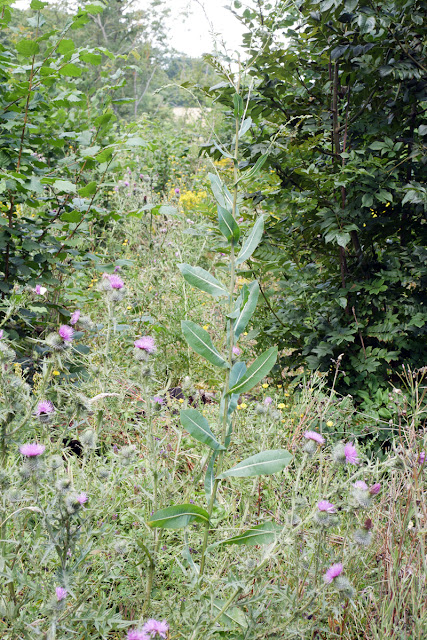 This is Prickly Lettuce, a common plant, often overlooked as the flowers are tiny and produced in small racemes near the top of the plant.

I think they are quite an impressive plant as is their relative the Great Lettuce. 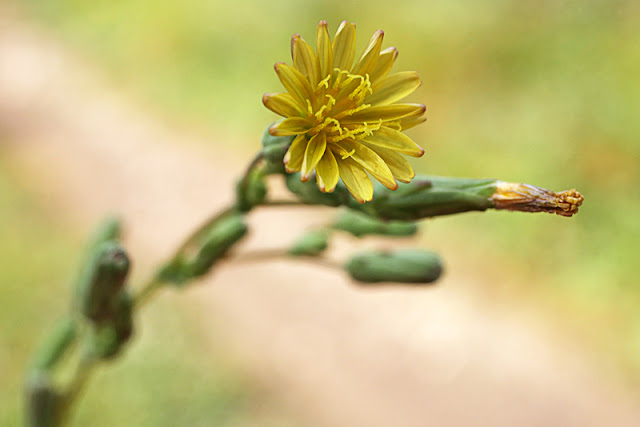 One of the fine views. 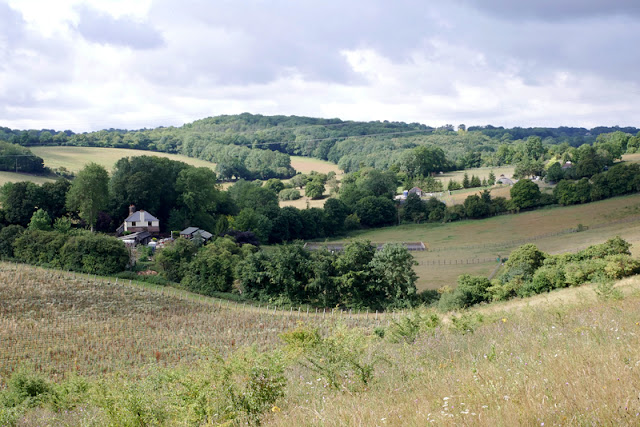 I'm not so good at chasing butterflies any more, but if they stay still, I'm up to having a go at taking a photo or two.
This is a Marbled White, a chalk grassland favourite.
Melanargia galathea 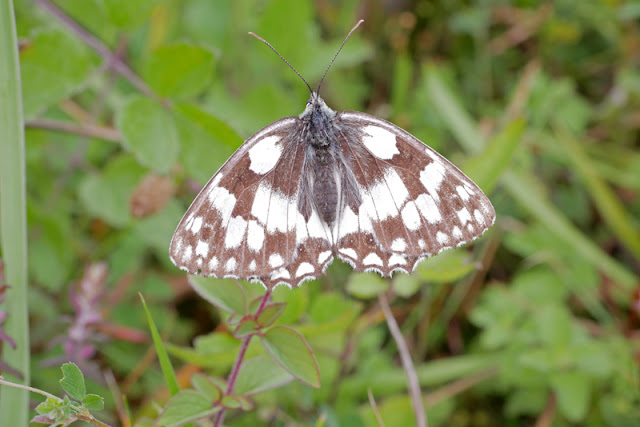 In the Autumn and into Winter, the following plant is called Old Man's Beard, thanks to the swirly shapes of the hairs around the seeds, but here it is in flower.
Traveller's Joy, apparently also a favourite of this visiting honey bee.
Clematis vitalba 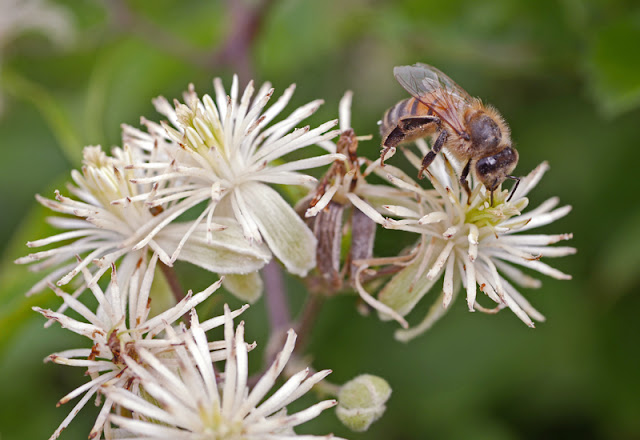 If you sit down on chalk grassland you are more than likely going to feel one of the following thistles prickling your behind. It is often hidden by other plants in the short turf too.

Here it is in flower, the Dwarf or Stemless Thistle. I prefer the Dwarf name as I have seen several flowers with stems up to 6" long, so hardly stemless. 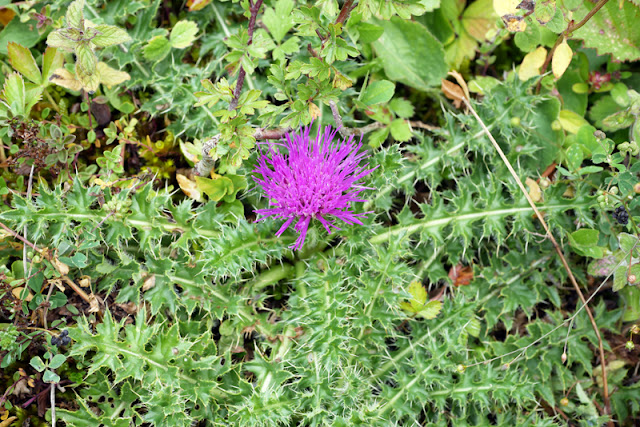 The chalk also threw up the beautiful Clustered Bellflower, another Kent RPR species. To give some scale, these were only about 8" tall. There's a Wood Sage plant in the background too. 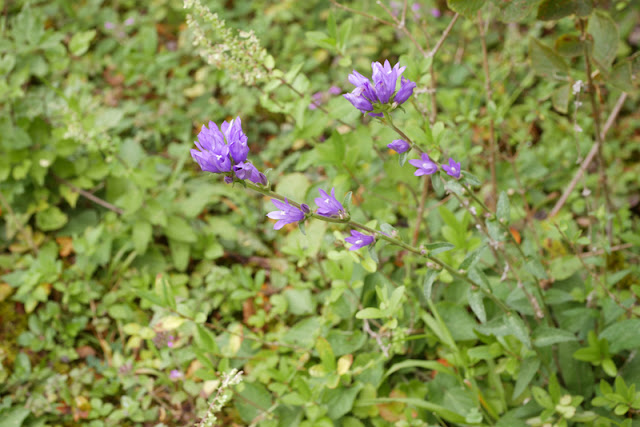 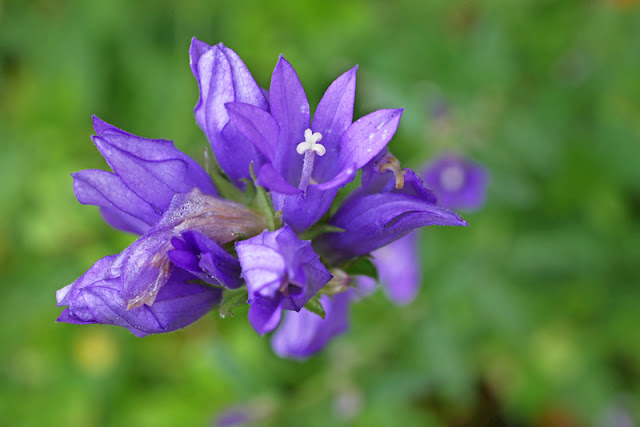 As I walked back to my car along the lane I noticed a large Solanum type plant growing in the verge. Its origin was most likely fly tipped potatoes that had rooted and flourished in the shelter of a semi shaded verge. The flowers are several times bigger than Black Nightshade which has identical looking, but much smaller flowers. 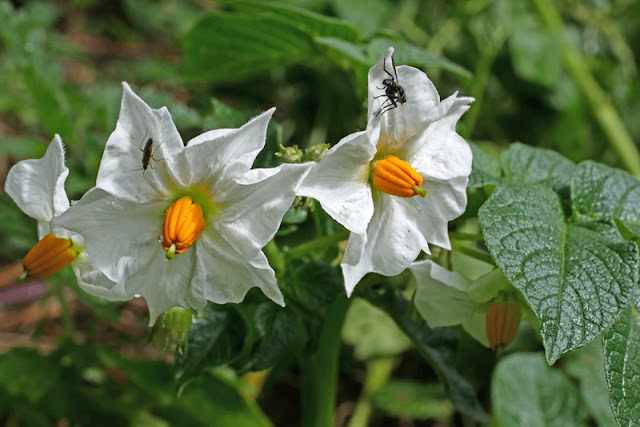 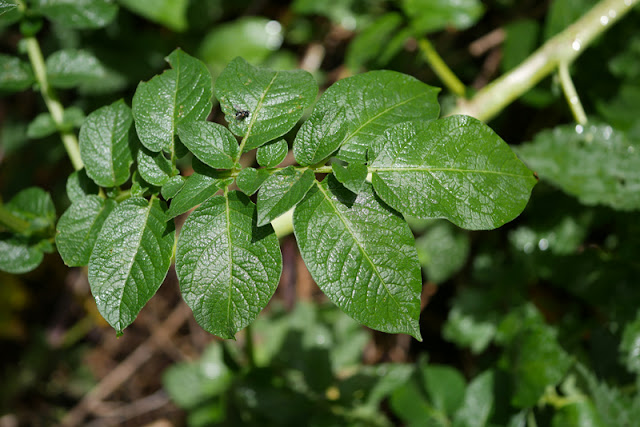 So ended another lovely Summer's day walk. I so look forward to next Summer and hope that I can once again enjoy the wonders of nature.