This is primarily a wildfowl reserve run by the Kent Wildlife Trust near Sevenoaks. There are several lakes with paths around them, though until recently these paths did not circumnavigate the lakes. A recently opened 2 mile long path did go all the way around and so tempted us to take a walk and see what flora might be there. This is what we found of interest. 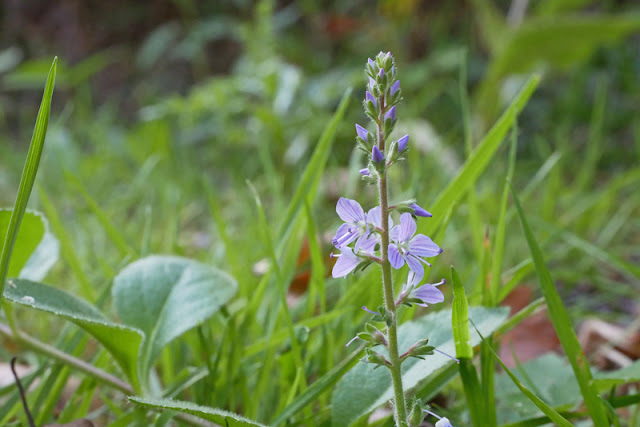 We found a few stands of the alien Yellow Balsam with its pretty though small flowers, offset by its very large leaves. 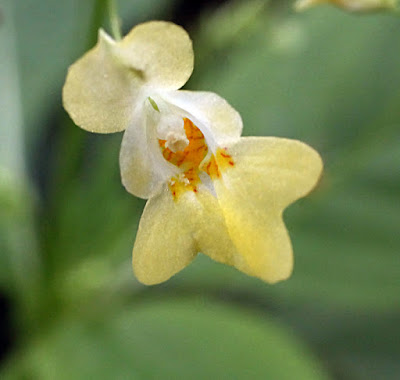 The image below shows the tiny flowers and large leaves of this plant. 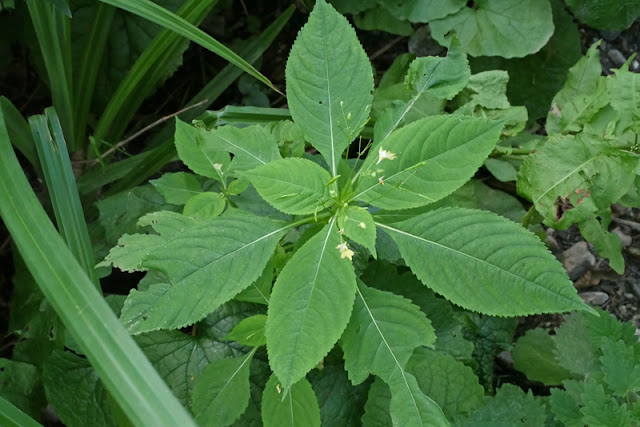 The invasive alien New Zealand Pygmyweed in a semi dried up pond. 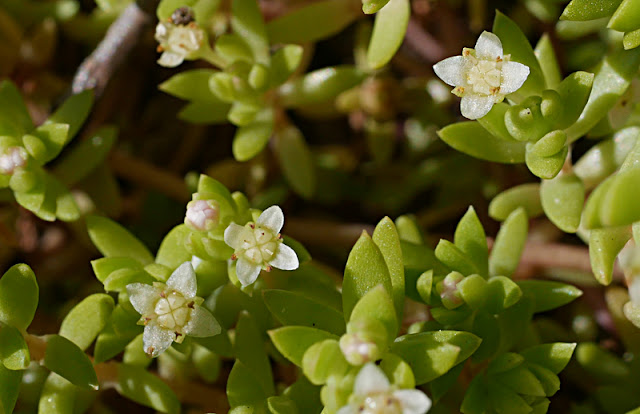 Marsh Woundwort, a plant I had not found here before the new path was opened up. Unusual in west Kent. 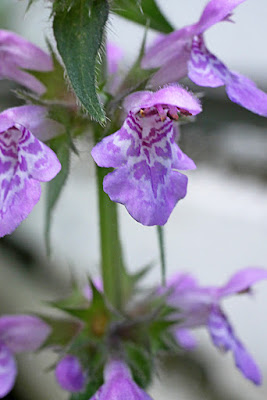 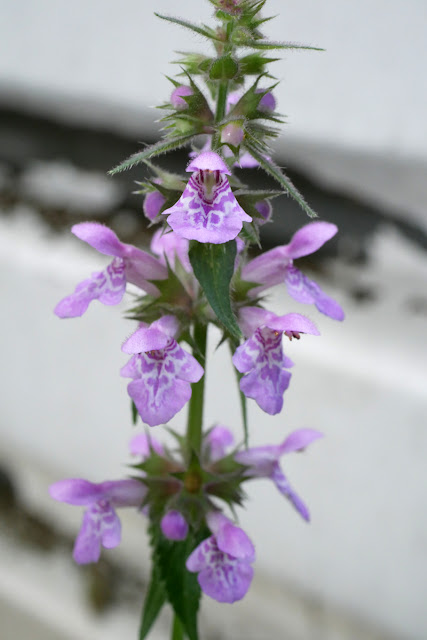 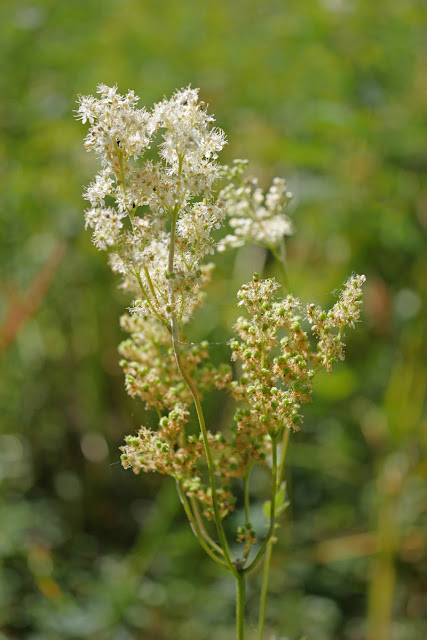 Meadowsweet was present in some lake marginal areas. 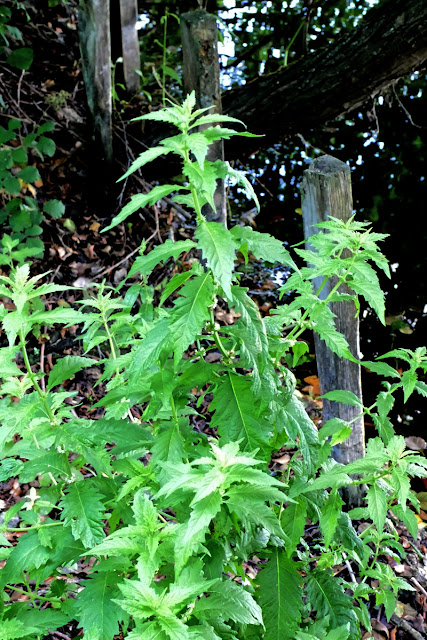 Gypsywort's leaves give it's identity away even without flowers, though at this time of the year, they are flowering nicely. Small whorls of tiny flowers speckled with purple dots surround the stem. 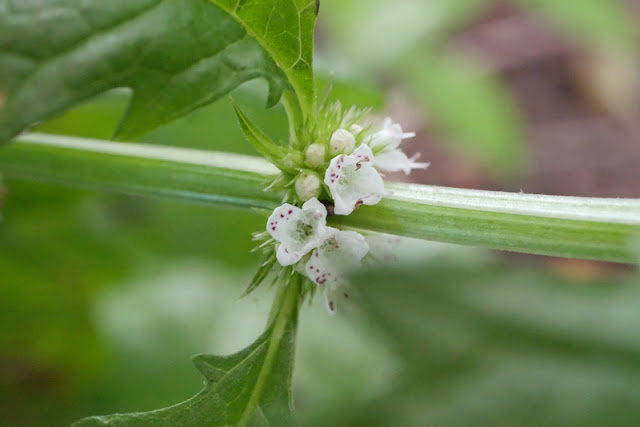 I then found some unusual Forget-me-nots. These were usually Water FMN but they looked rather different. So much so I wondered if they were a hybrid or possible M. laxa? I took lots of photos and the County Recorder decided to visit the reserve a while later. Whilst the following plants did not follow most textbook descriptions of M. scorpioides measurements showed they were just that after all. Given this, I haven't uploaded all the photos of hairs and stems, just the pretty flowers!

Water Forget - me- not 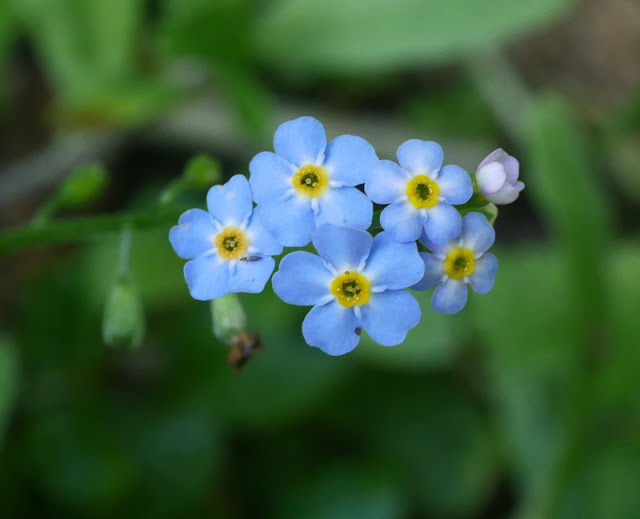 In a drier part of the path were plenty of Scarlet Pimpernels. I always like looking at these to try and find the variants. Flowers are usually red/orange, but can also be dark pink, creamy white to pink, and blue! Note the recent name change.
Lysimachia arvensis (forma arvensis) 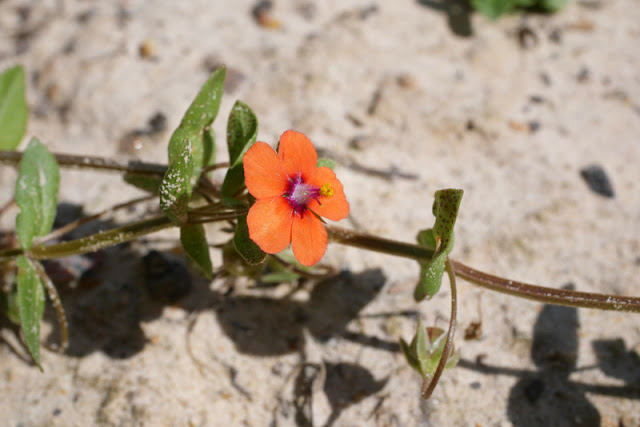 Also in the drier parts but on a pre-existing path was a large stand of Pennyroyal. These had been previously recorded here before, but oddly I had never spotted them, despite 7 years worth of visits! I must have never been there in late July before I suppose. I have no idea as to their origin but it would be an odd place to plant them where they were found. I supsect it was from a seed mix when the site was landscaped by a quarrying company back in the 1960s. A Kent rare plant. 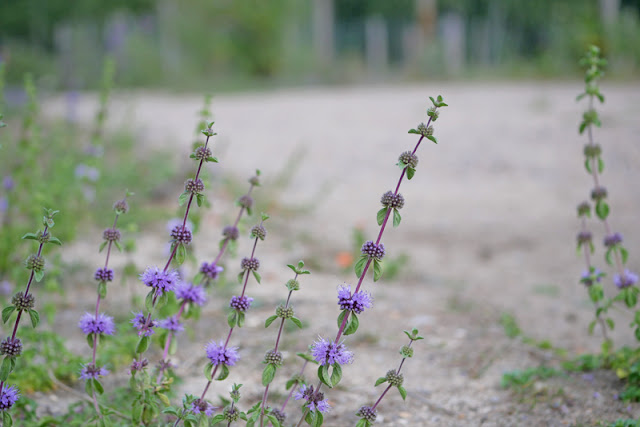 Superficially they look like a skinny form of a Mentha hybrid, but the leaves are smaller and well spaced and the calyces are very hairy.

I was very pleased with finding this as to date this species had eluded me in Kent. 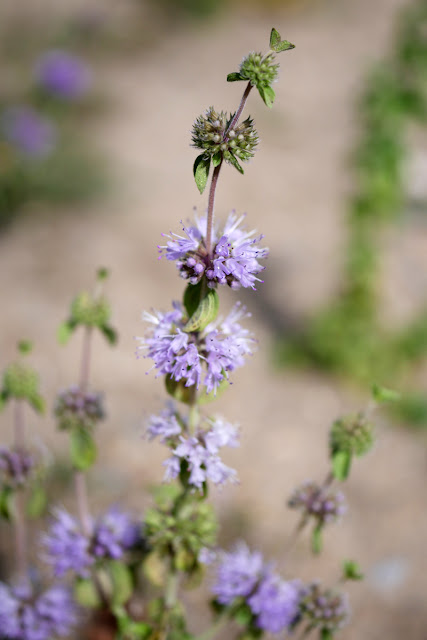 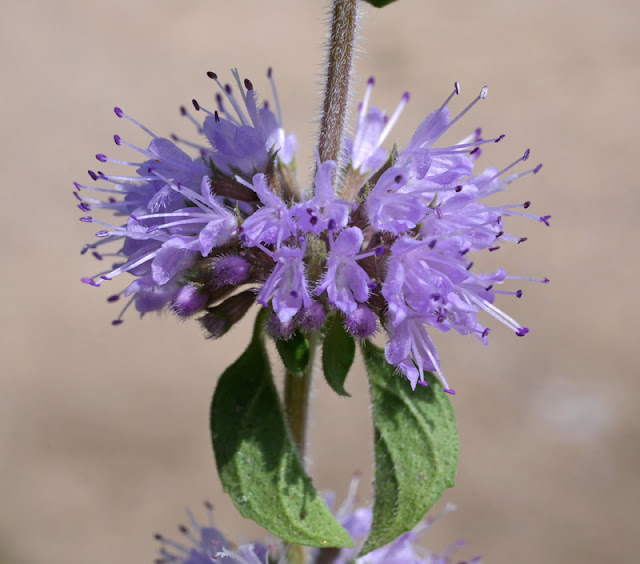 Here's a large irridescent green beetle on an in bud Water Mint. 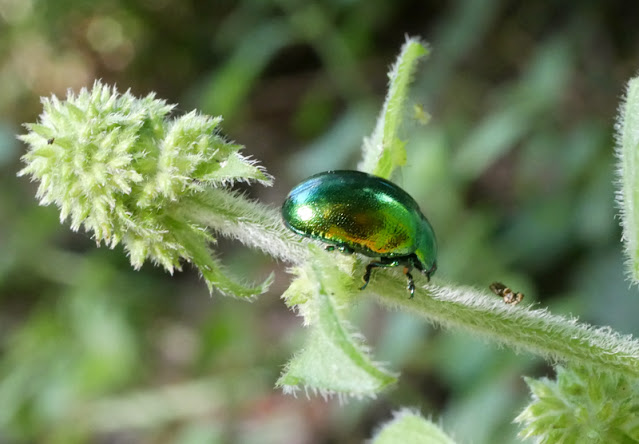 A view towards the chalky North Downs from the reserve circular path. 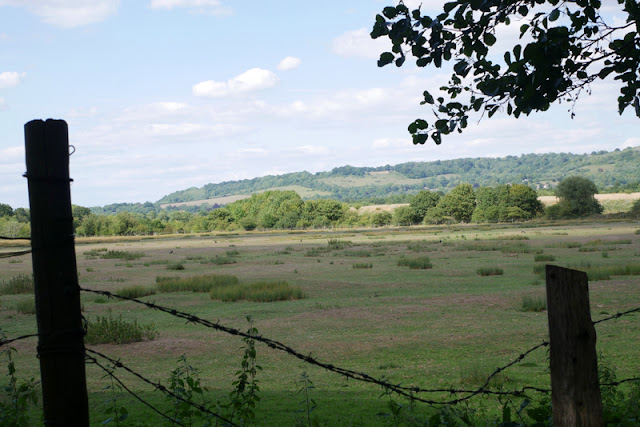 Both Common and Water Figworts were present here, both are quite tall and the flowers look pretty much the same. The leaves are the best way to tell them apart, there's a photo below. 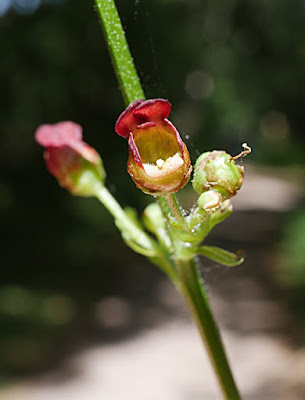 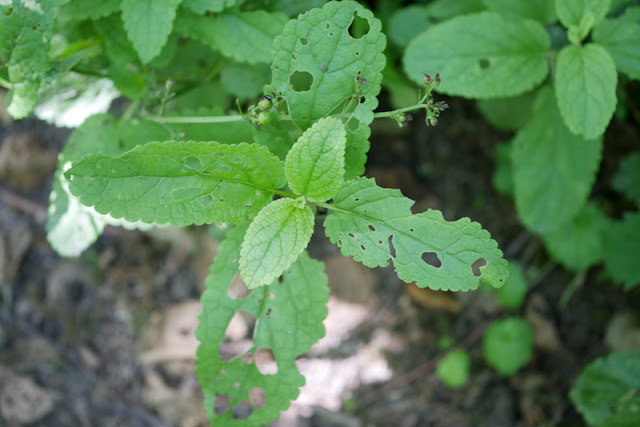 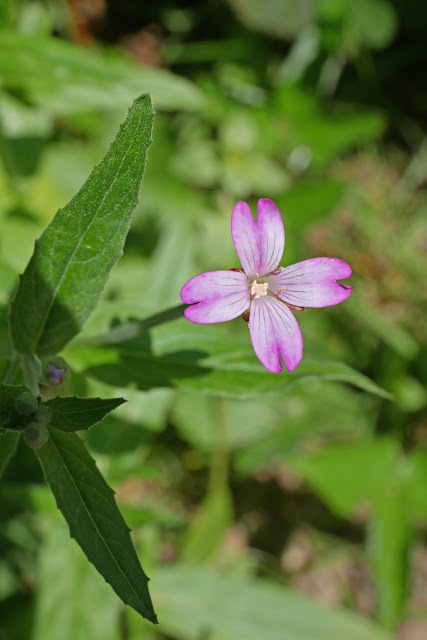 Willowherbs should be easy to identify. However, they interbreed and cross back with either parent forming hybrid swarms and in fact are usually not easy to identify at all!

This particular one struck me with a single vivid purple flower. It was quite small and was alone, thus I could not compare it with any others nearby.

So I sent this and some other photos to the County Recorder and he stated it was simply Hoary Willowherb, a common species, but one I had never seen with such a beautiful flower on as here. I would add he is also the BSBI referee for Epilobiums.

Plants like the one below with 4 petalled flowers are invariably P. x mixta a hybrid cinquefoil. However, these usually (always prior to this find) had a mix of 4 and 5 petalled flowers. These all had only 4 petals. The leaves are clearly not  a match to Tormentil, so that leaves the hybrid or Trailing Tormentil as possible species. Unfortunately, I was too early to find this and identify it. To do so with any accuracy one must disregard them when there are not at least 3 withered flowers behind the open one (as recommended in the BSBI Plant Crib). I could find no withered flowers or seeds, thus the plant remains unidentified. 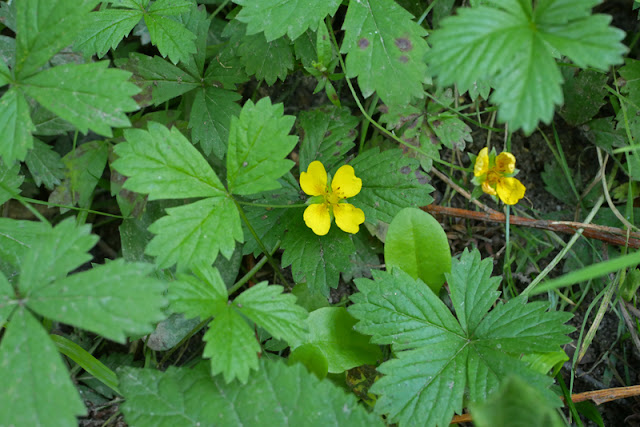 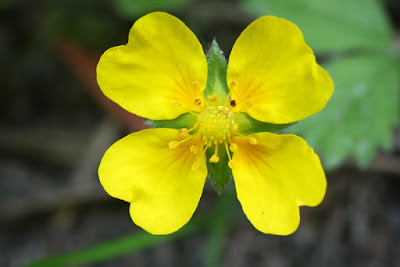 Some views around the reserve. 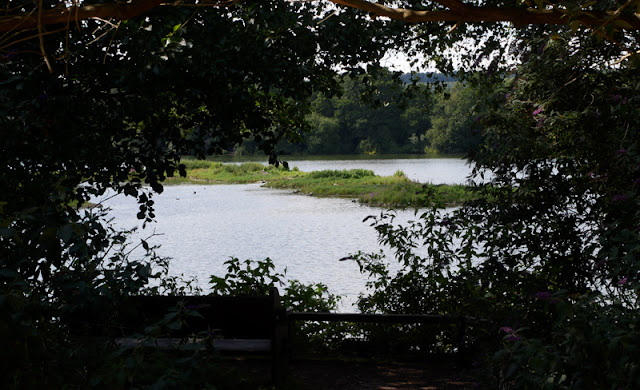 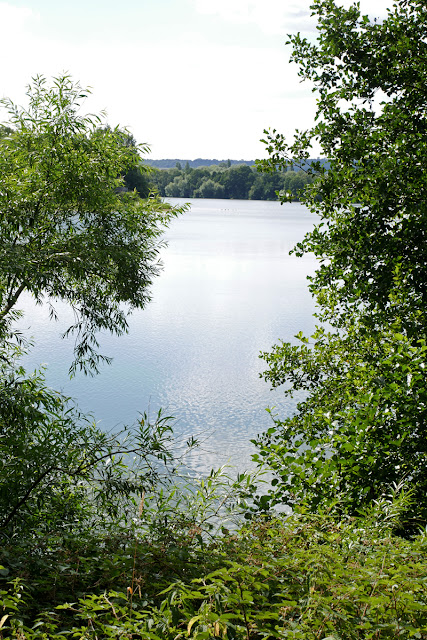 So ended a very nice Summer's day walk around this reserve.

The new path opened up the way to finding some new plants and provided some new habitats too. I noted some gone over Common Spotted Orchids too.

As always, the walk threw up some difficult to identify plants and this is the benefit of being a member of a botanical group such as the BSBI or KBRG. Most counties have a botanical group. Go to bsbi.org find the map of the UK and Eire and click on your county for details local to you.

If groups aren't your thing, you can submit plant photos every Sunday on Twitter between 8-9pm tagged #wildflowerID and the wonderful wildflowerhour team will ID most plants for you free of charge and with a happy to help attitude.

Hope you liked the blog.