- March 18, 2016
It's surprising what you can photograph in just one hour. That's all the time I had spare before work, so I took a quick walk around Kent Wildlife Trust's Longfield Chalk Bank and the adjoining sports field. 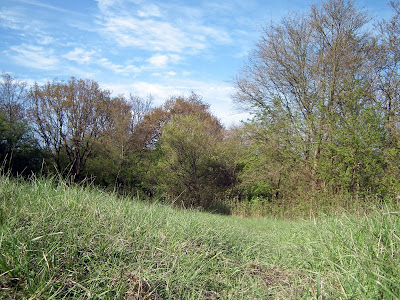 This photo was taken last April. The grass is quite a bit shorter at the moment. Being a small area of chalk grassland it will be a while before it comes to life. 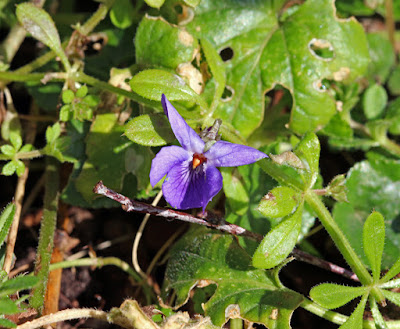 However, with the grasses being short, I could easily see the tiny specks of purple here and there in the open turf. On a closer look they were Early Dog Violets, a pleasant change from the more numerous Sweet Violets at this time of the year and a first for this venue for me. 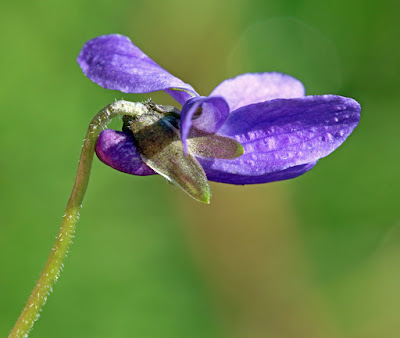 Unlike Sweet Violets, these have pointed sepals, the spur being small but darker than the petals and usually un-notched. 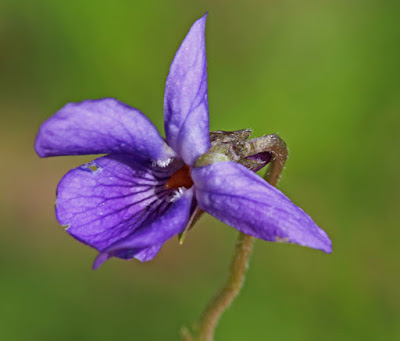 Violets are quite the little beauties. The Early Dog Violet is called : 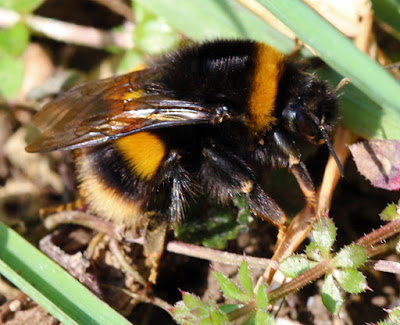 I've not yet been able to photograph any insects so far this Spring, so I was pleased to find this queen Buff Tailed Bumblebee looking for a nesting site.
They are one of the first bumblebees to emerge in the Spring. It was very active and I'm surprised the photo wasn't blurred! 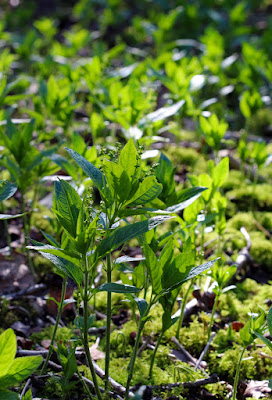 In the wooded area was a stand of Dog Mercury with their petal-less flowers in long spikes coming out of the leaf axils. 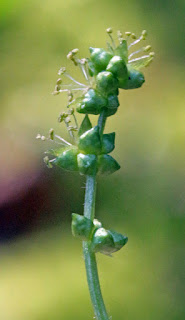 Here you can see the tiny stamens and anthers of Dog Mercury.
Some plants nearby, though not in flower, had survived the mild Winter and were over twice the height of the flowering new growth. 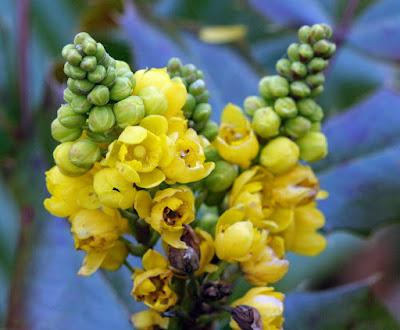 The last plant of note in this small reserve was a naturalised Oregon Grape. These are cultivated in gardens nearby with holly like spiny leaves and produce berries.
No doubt birds have spread them to the nearby reserve. This plant has been there many years. 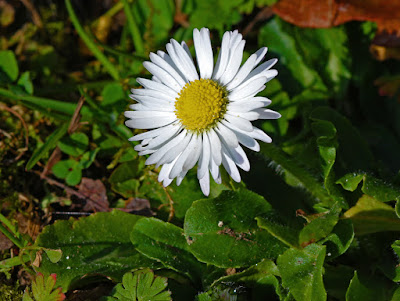 I then came out of the reserve onto the adjacent football pitch. Daisies were prevalent here.

Around the pitch, a path bordered by a hedgerow had more botanical interest than the reserve itself. 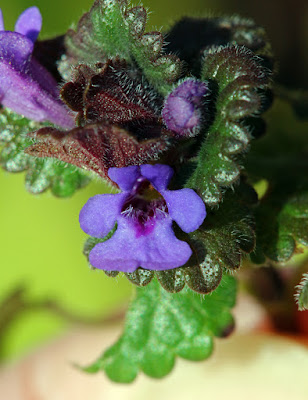 Ground Ivy had finally come into flower in large numbers. Even when not flowering, their leaves are distinctive and when crushed have a musky mint smell.

They do spread rapidly though, so most people wouldn't want these in their gardens! 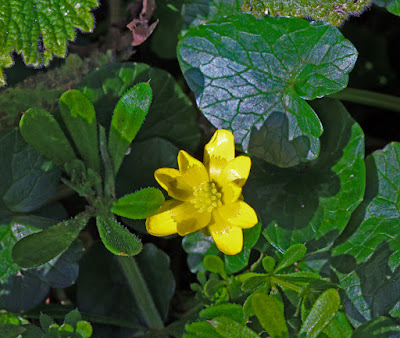 Lesser Celandines were dotted here and there along the hedgerow edges. A common Spring plant with lots of bright yellow colour to cheer up the day. 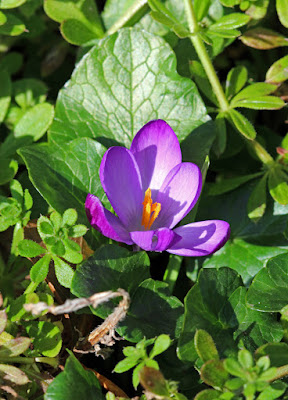 Very close to this was a solitary naturalised Early Crocus. Surrounded by wild plants it had been there a long time. I have found these naturalised plants flowering deep in woods, well away from people, but never in any numbers. 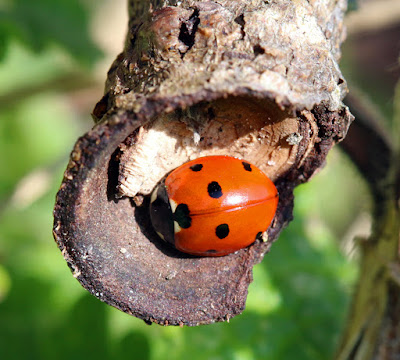 A 7 Spot Ladybird was sheltering from the cold breeze in the end of a twig hollow. Given that its head was retracted it's probably still hibernating. 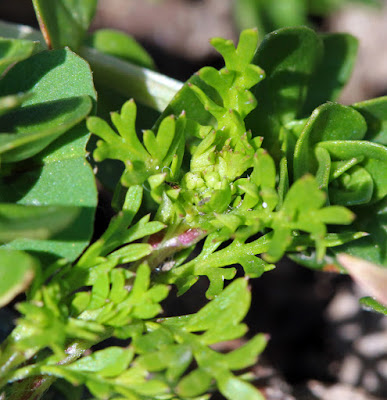 The path was covered aong the edges with Swine Cress. This is actually quite a small plant, which is apparently edible.

In the centre of the picture you can just make out a tiny cluster of flowers. I couldn't see these clearly even with my hand lens as they are only aboout 0.5mm wide!

However, my camera lens has better eyes than me and confirmed at least one tiny flower was open. 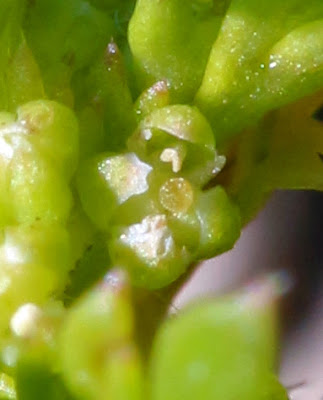 The tiny flower of:

You can just make out white petals slightly longer than the sepals. Lesser Swine Cress is usually petal-less and has long stringy clusters of flowers.

You can find both species usually, on field edges. 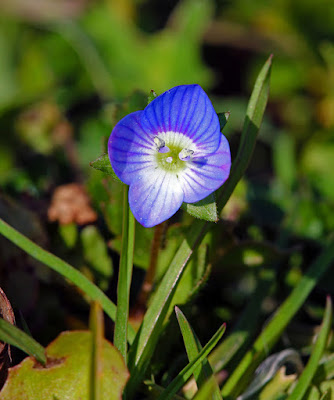 Next up were numerous Common Field Speedwells, an introduced species from arable farming, it has now spread throughout the UK.

It flowers all through the Winter if mild enough, but only opens fully in the sun.

I have noticed their flowers are larger now than when seen in January, but they are still quite small. 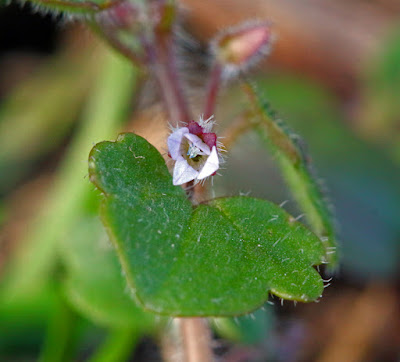 A much smaller version of this is the Ivy-leaved Speedwell, an ancient introduction, with of course, leaves shaped like Ivy.


These flowers were very small, about 2mm across.


That was about it for my hour before work. There were more flowers, such as White and Red Dead-Nettle and Dandelions, and soon there will be an ever rising number of species to marvel at.
Wildflowers really are fascinating once you get used to looking for them. Before you mow your lawn, have a look at how many flowers are in it. Perhaps you might even not mow a small area to see them grow and flower? Pavement cracks have a surprising number of species as well!