- March 13, 2016
Early March is a transition time from Winter to Spring with the Winter finally finishing off the stragglers from last year and the beginnings of the new Spring wildflowers starting to appear. Here's what I found this week. My previous blogs can be found at barbus59.tumblr.com

First up was a visit to Kent Wildlife Trust reserve at Stockbury in Kent. The woodland floor was already carpeted with Bluebells, but a few were already flowering. 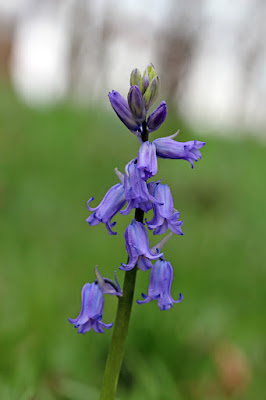 In a month or so, there will be a huge carpet of them. Being mostly the native Hyacinthoides non-scripta their scent will fill the wood. 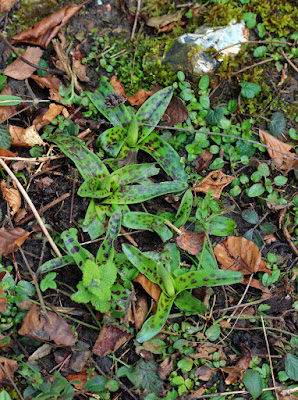 The leaves on Orchis mascula are nearly always spotted, making them easy to distinguish from the more common Bluebell leaves coming up now as well. 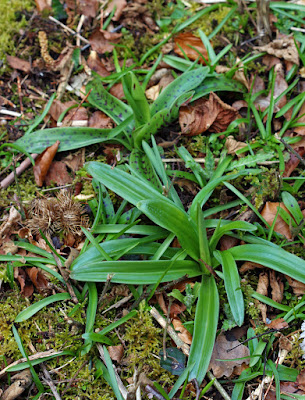 However, I was fortunate enough to find the rarer unspotted version as well. This wood, has in the past thrown up pure white Early Purple Orchid flowers and they usually have unspotted leaves, so I'll have to go back to see in a month or so. 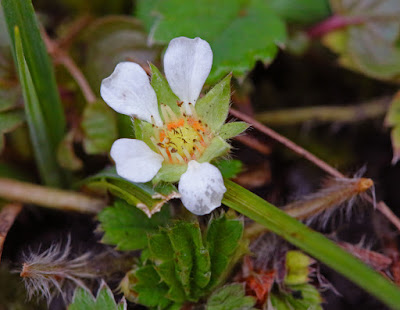 When the path opened up where more light comes in I found a patch of Barren Strawberry, Potentilla sterilis. They have 5 petals with gaps between them and dull leaves without a distinctive centre point.
This distinguisshed them from Wild Strawberry, when not in fruit. 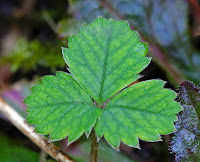 You can see what I mean from this photo of the leaves, which lack the central projecting point and glossy surface that Wild Strawberry has. 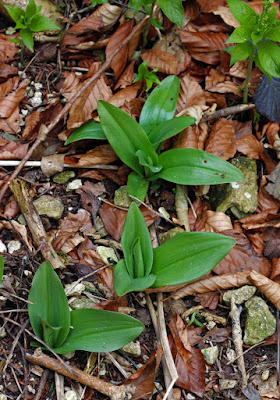 Also in this area were rosettes from Orchis purpurea, the rare Lady Orchid. There are only a handful of sites where these can be found outside of Kent.

Their flowers are tall and stunning and appear late April to early May. 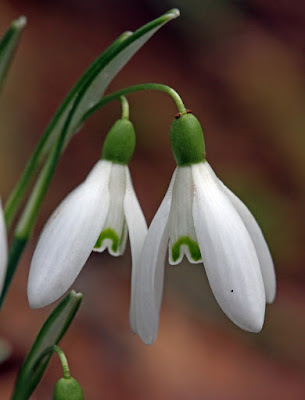 For the most part, Snowdrops, Galanthus nivalis, are planted, and as such I have little interest in them. However, in places they have naturalised, such as here at Stockbury. They brighten up the woodland floor before the masses of Wood Anemones and Bluebells get going. 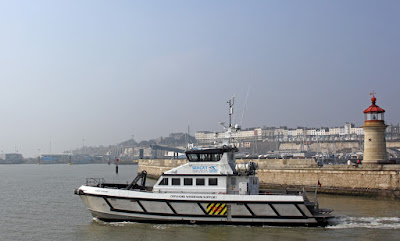 That was it for midweek.
On Saturday we had a pleasant sunny day out in Ramsgate and the surrounding area. Coastal areas always have some interesting wildflowers, and of course, other sights like this Windfarm boat leaving port. 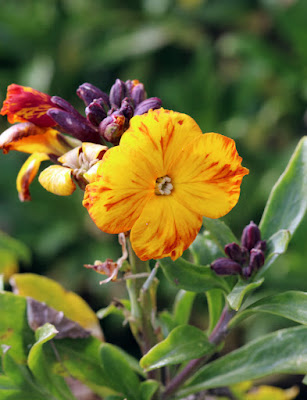 The harbour a road goes down the cliff to a car park. All along it on the cliffs were growing naturalised Wallflowers, Erysimum chieri. In medieval times, these were in cultivation and they escaped into the wild in the lae 1500s.

A person on Twitter informed me that the red stripes on the flower are caused by a virus transmitted by aphids. Probably not good for the plant, but it makes the flowers look great! 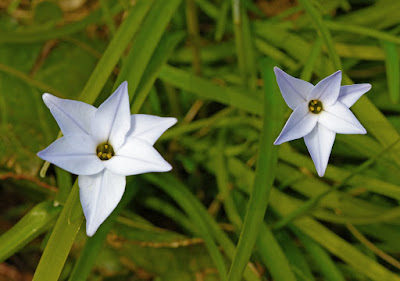 Once in the car park there is an area of waste ground with lots of plants growing there. It's difficult to know if these are naturalised or were planted years ago, but they are Spring Starflowers, Iphion uniflorum. I have seen them wild inland as well. Their six star like petals make them easy to identify. 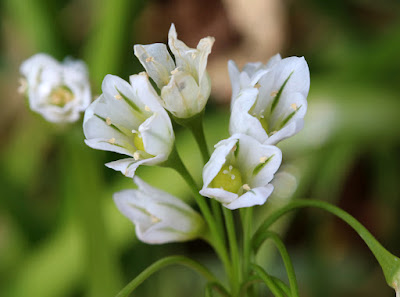 Close by was a patch of Three Cornered Garlic, Allium triquestrum, another escape, but one that readily spreads, so I am hapy this wasn't planted at the base of the cliffs! Their flowers hang down, so to get this shot I had to use one hand to gently raise them up while balancing the camera with the other on my knee. Quite tricky! 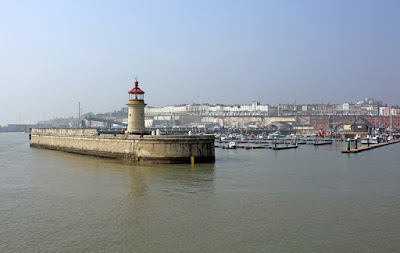 Back at the harbour, walking out on the East Pier, there were lots of clumps of thick, fleshy grass, which I suspect may be a Pearlwort, not flowering yet. However, there were other things to see. At the end of the pier we saw a Seal bobbing up and down in the tide, until it dived off to seek out lunch. 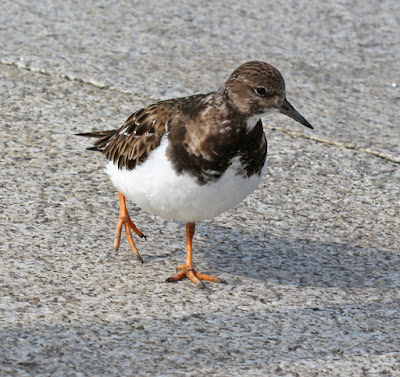 On steps on the inner side were a group of those lovely small birds, Turnstones, waiting for the tide to ebb again. 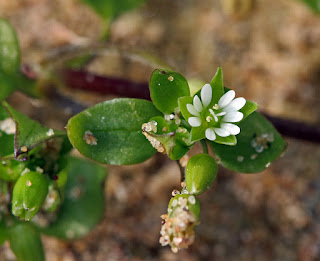 Common Chickweed, Stellaria media, is a common weed of arable fields and even pavement cracks, but finding them on the top of a sandy beach was a first!

Quite tiny flowers, these can be distinguised from Common Mouse-ear in that the latter has an all round hairy stem. Common Chickweed has one or two lines of hairs all up the stem. You might need an eyeglass or hand lens to see them though! 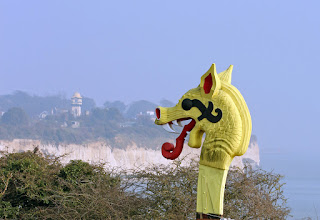 We then left Ramsgate and stopped off in nearby Cliffsend in Pegwell Bay. There's a full size replica of a Danish Viking Ship here, commemorating their landing here in around 4-500AD from memory.
On the foreshore below it used to be a hoverport, disused for many many years now and often worth a look for interesting flowers and insects. 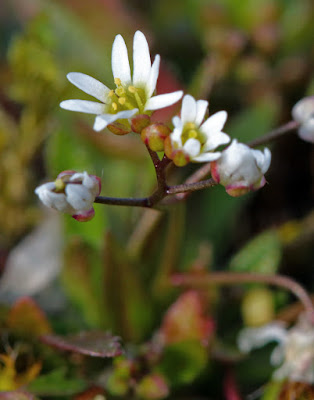 There wasn't much to see yet, but there were hundreds of very small Common Whitlowgrass in flower. Here, they were only about 2-3" tal, but inland I've seen them to about 6" tall.

They really are quite lovely, but don't last long, then they are gone for another year.

The leaves form a tiny rosette and are strap shaped hairy, usually toothed. 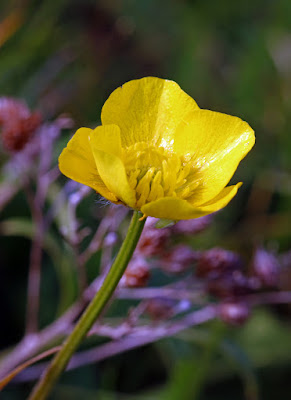 Bulbous Buttercup, Ranunculus bulbosus, was near the Viking Ship. These are usually the first Buttercup to flower, but having said that both Meadow and Creeping Buttercups were still flowering last month, left over from 2015! 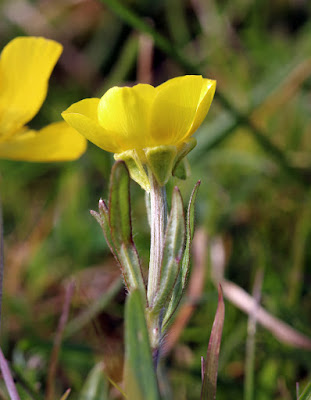 However, you can easily tell Bulbous from the others by the completely reflexed (bent back) sepals under the petals.
At this time of the year it's the only other Buttercup with this feature. 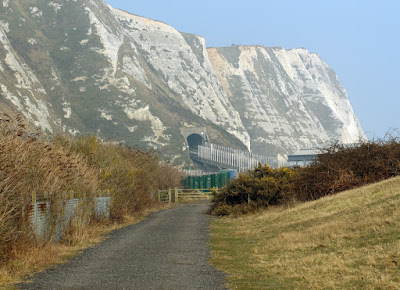 From here we went to Samphire Hoe, near Dover. It's entirely made of spoil from the Channel Tunnell digging of the 1980s. It is now a splendid venue for many wildflowers, insects, butterflies and snakes! 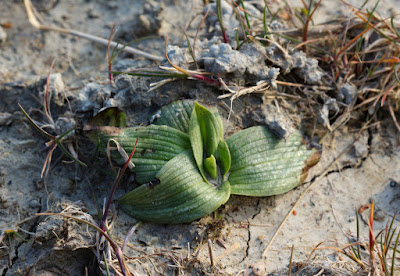 It didn't take too long to find what I was looking for. The rosette of the Early Spider Orchid, Ophrys sphegodes.

These are only found in a very few locations in Kent, but there are usually over 1,000 in flower each year here. They arrived all by themselves as well, no doubt from France, where they are common. Orchid seeds are like dust and can travel a long way on the wind. 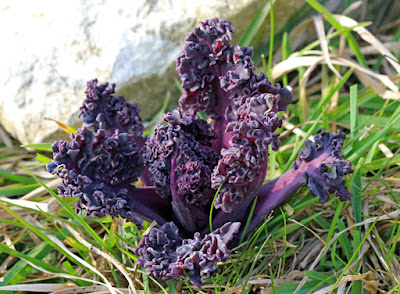 Apart from the orchid rosette, there wasn't much to see yet on the man made part of the Hoe, but it's a different story when you get to the natural beach at its Western end.
Here is Sea Kale, Crambe maritima, looking like a triffid as it emerges from its Winter slumber. 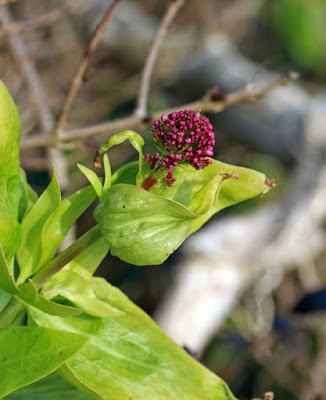 Red Valerian, Centranthus ruber, was coming into flower, some plants quite hapily growing in shingle, as they do at Dungeness as well. 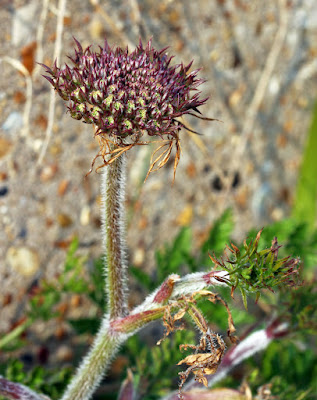 The final plant of note was the humble Wild Carrot, Daucus carota. This was around a foot tall and about to flower, far advanced of those inland.

In a month or so, beaches wil come alive with the colours of many wildflowers from orchids to Wild Cabbage and Kale to Sea Holly. Always have a look around wherever you are, you are most likely to find something interesting.

Don't forget to take the kkids or Grandchildren with you, it may be the only time they ever get to see nature in all its forms.