- August 15, 2017
Having left Snowdon, we headed North towards Llandudno and the Great Orme. This photo was taken a few days before from Mariandrys nature reserve on Anglesey with Puffin Island and the Great Orme behind it. It's an imposing headland that can be seen for miles down the Menai Straits. 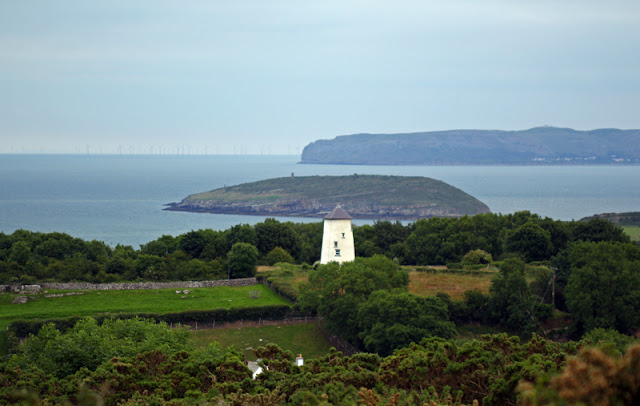 The Great Orme is a massive limestone outcrop jutting out into the Irish Sea and supports several rare plants. I did have a small hope of perhaps spotting a very early Dark Red Helleborine, fingers crossed. We headed towards the South facing slopes of the Orme first to check out a site there that a botanical friend Owen Leyshon had told me about months previously.

There were great views here but the weather was really quite atrocious now. The wind was gusting not far off gale force and it was raining constantly. 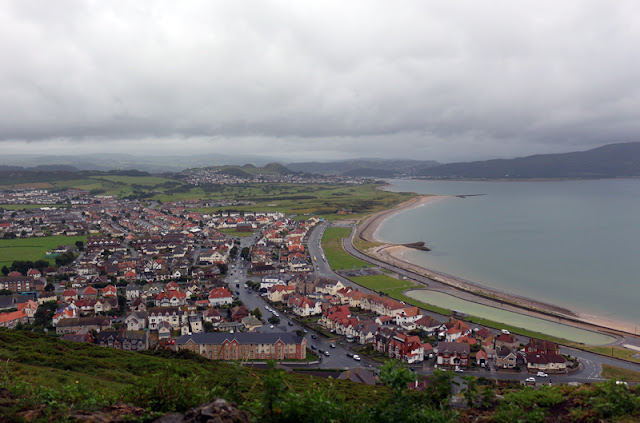 We had only gone about 20 yards from the car when I spotted several plants that were most definitely on my to find list! 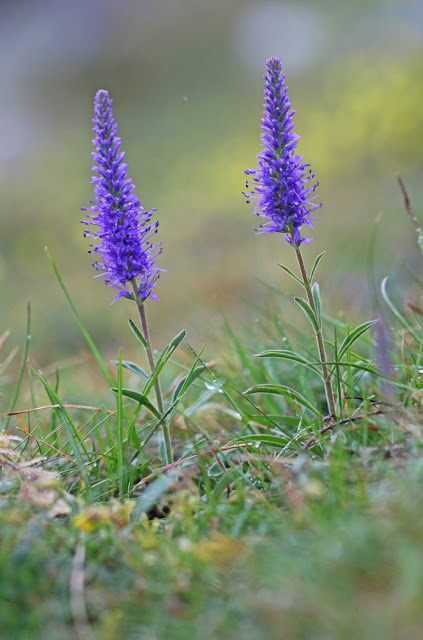 These are the very rare Spiked Speedwell. As you can see they weren't much taller than the surrounding grasses, I suppose about 8" tall.


Unfortunately, due to the high winds, I couldn't get pin sharp photos, but I think these are good enough to convey their beauty.

I failed to find them elsewhere on the Orme, so I was very lucky to find some so easily on my first try. 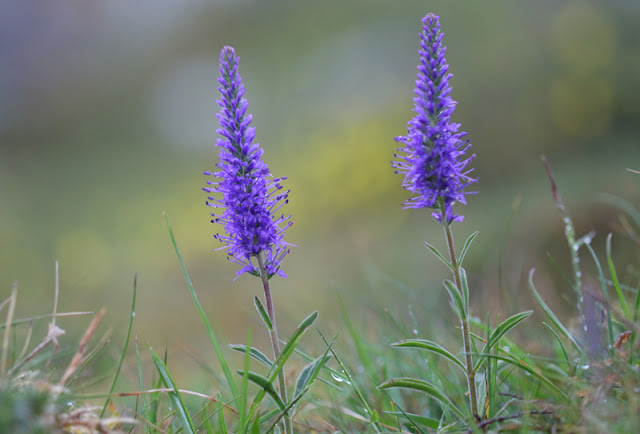 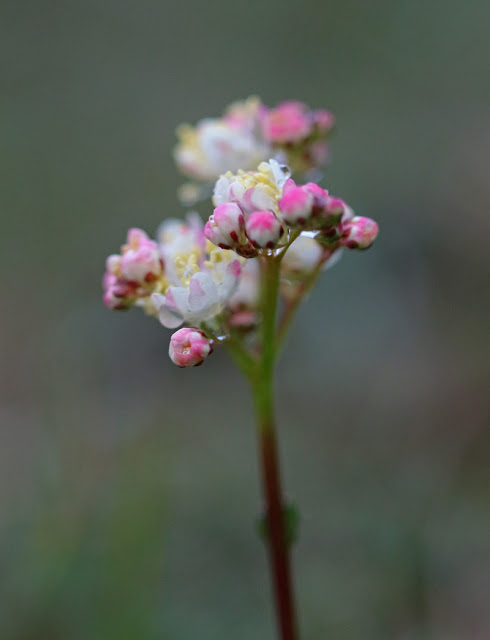 Nearby and quite numerous were the beautiful flowers of Dropwort. Their white petals tinged pink in bud giving them a two tone pastel colour effect.

This is Limestone Pavement. It erodes leaving fissures and gullies that are home to rare plants such as Dark Red Helleborines. I spent quite some time looking around them. However, there was another plant I wanted to find here, not a showy orchid, but a plain ordinary flower that most people would pass by as another Dandelion type plant. 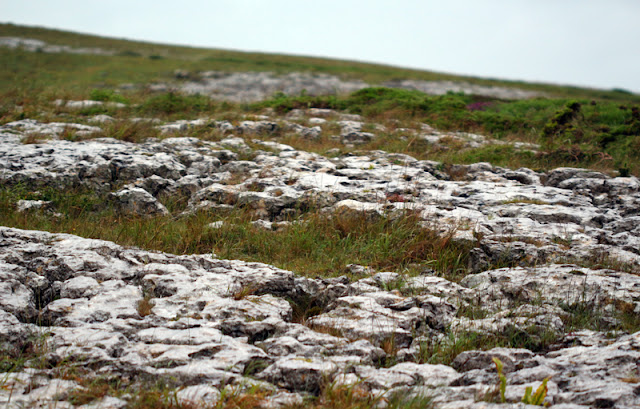 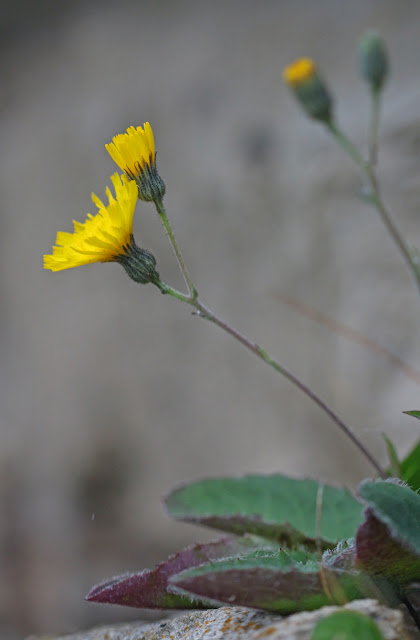 About 4 feet down a sheer limestone cliff face I found this wonderful plant, appearing to grow out of the rock itself.

This is Spotted Catsear, another rare and declining plant. 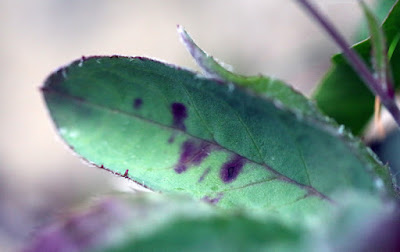 It was very difficult to photograph on this cliff but I managed to find a leaf facing me to show how it gets it name. The black spots are very distinctive.


I wanted to change the camera lens to take some view shots, for although the weather was dire, the views were still spectacular. I was delighted to find a small cave in the cliff to shelter out of the wind and rain and change the lens safely. I must admit, I spent a while just sitting here taking it all in. Beautiful. 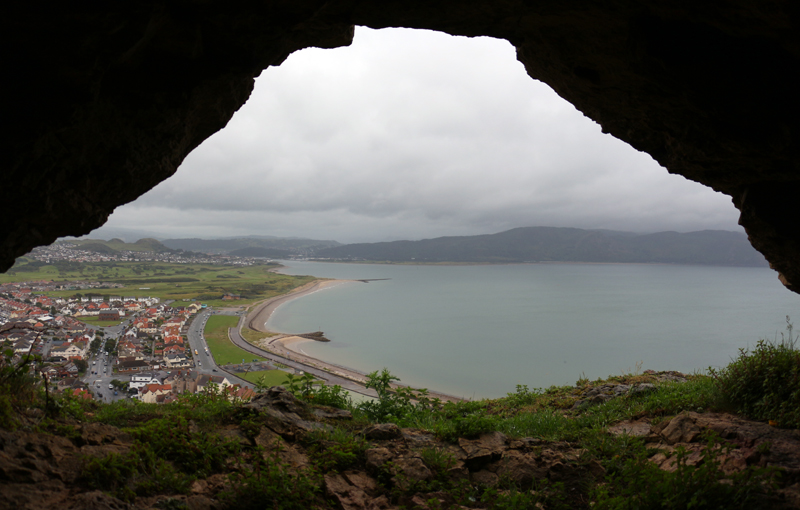 Blotches of a lovely purple colour in the limestone cracks of the cliff caught my eye. They were the lovely Bloody Cranesbill, and there were lots of them. If I see these in Kent they are almost always garden escapes, but these ones belonged here. 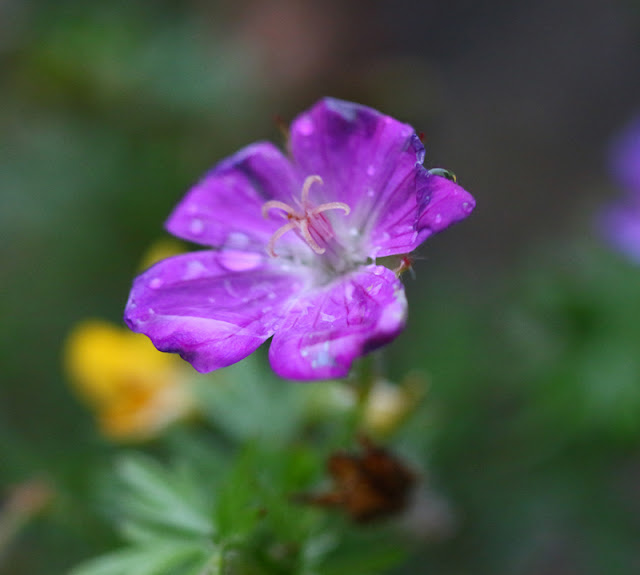 While on the lookout for the Dark Red Helleborine, I came across another rare and declining plant. Unfortunately it had no flowers or fruits, but it was a great find nonetheless. It's a Juniper, which can grow to a small tree size but in coastal areas it tends to be stunted and look rather like a Bonsai tree!

I've only ever seen them on the SE Kent coastal cliffs before. Each tiny leaf is like a pine needle and is tipped by a very sharp bristle. I found this out when testing them to see what it was for sure, ouch! 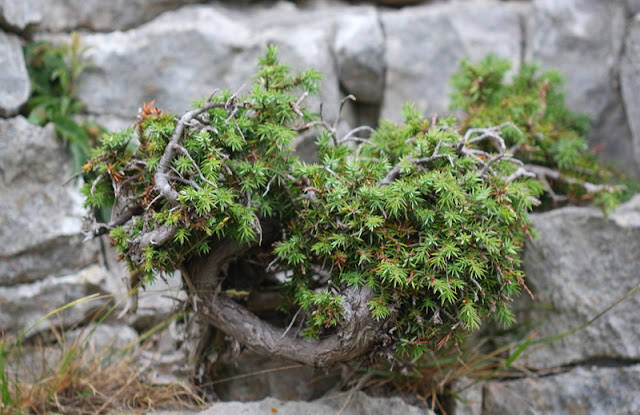 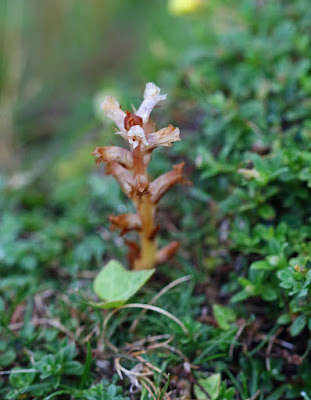 I was surprised to find a Broomrape in flower nearby and initially thought it was a Common Broomrape. However, it was growing on Ivy and a closer look at the flower showed that it was indeed an Ivy Broomrape.

This Broomrape tends to be found on Hedera hibernica here (Atlantic Ivy).

Quite common in the West of the UK but rare in Kent. Oddly, there are several colonies of it growing in the Dartford area but there they grow on Hedera helix (Common Ivy). I guess they don't like H.helix much as there is masses of Ivy everywhere in Kent but very little of this delightful Broomrape.


That was it for here, we failed to find Dark Red Helleborine and another rare species, White Horehound, both previously found here. To be honest, I was a week to 10 days early for the Helleborines, so I didn't really think I'd find any flowering.

From here, we drove up to the Great Orme summit car park. Standing on the summit just past the playpark, I could lean 45 degrees into the wind. Needless to say, I wore full waterproofs all day as well.


As I walked around I found a large amount of White Horehound in an unlikely place. On the steps leading to the children's playground were numerous bunches of them, all in flower. I'd only ever seen this once with a single plant at Boxley Warren in Kent, so it was great to see a whole stand of them. 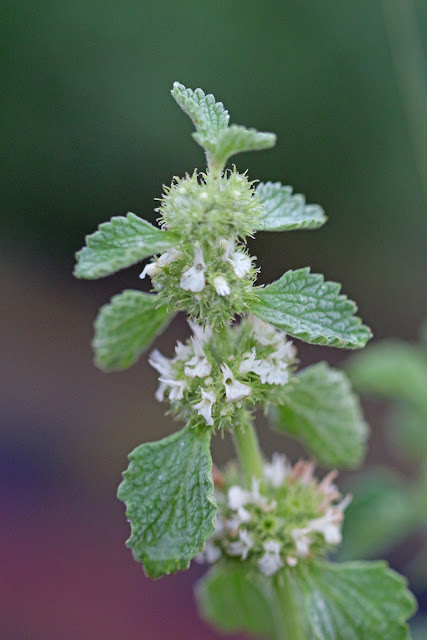 They do look a bit similar to Black Horehound (Ballota nigra) which can have white flowers occassionally, but the leaves on the White Horehound are very crinkled, a bit like Wood Sage leaves and paler than Black Horehound as well.

This is another Nationally Scarce plant and great to find here.

This was as close as I got to the very rare Great Orme Cotoneaster, growing in their wildlife garden on the summit. The weather was so bad, I didn't fancy hunting for it. It's our only native Cotoneaster plant and our rarest. 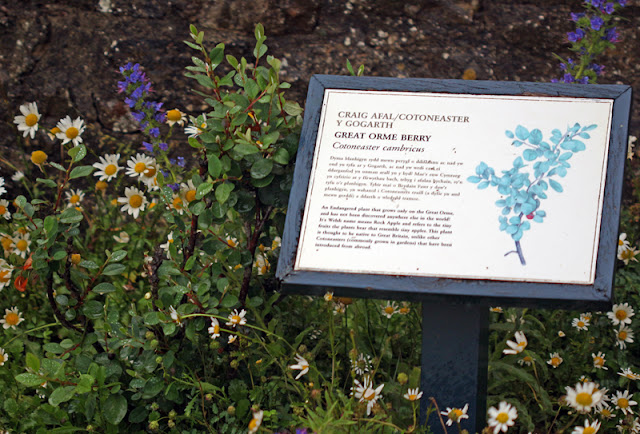 We then drove away from the summit and took the coastal road around the Orme. The weather was so bad even the toll collector had gone home for the day. No doubt thinking no one would be so stupid as to visit on a day like this. Well, people don't talk about extreme botany lightly!  Having survived horizontal rain and gales at Mount Snowdon's summit earlier this day, a mere sea gale and rain was nothing...... 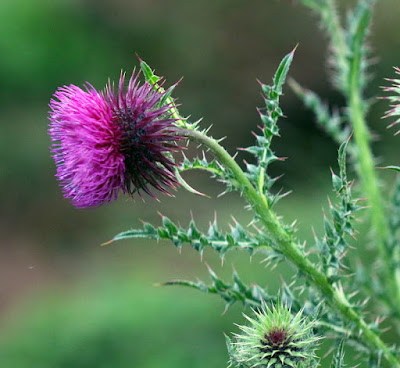 However, the up side of the weather was that we were the only car about. That meant I could stop virtually anywhere and have a look around near the car.


This was one of a group of lovely Musk Thistles on the Orme by the road. Of course, they were blowing all over the place, so photography wasn't necessarily quick! 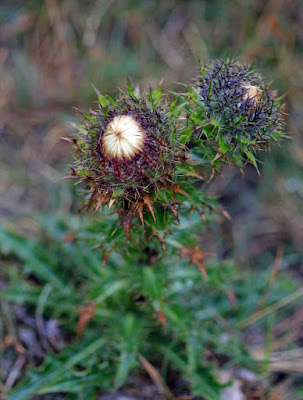 Here's another thistle that I usually see on chalk or shingle in Kent. It's the Carline Thistle. These aren't open yet, but when they do open they actually look rather dead and dried up.
Look closer (when they are open) and there's a ring of purple tiny flowers around the dead looking centre disc. Bees love them. 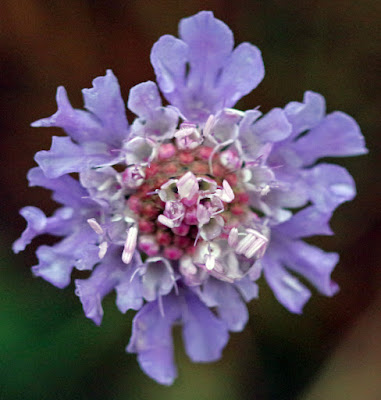 This was my final photo of the day, the humble Field Scabious, common on chalk turf and quite numerous around the Orme as well.

Even this plant is rapidly declining now though.

That was it for the day, and after some lovely fish and chips in Llandudno,  we made our weary way back to Anglesey to rest for the next day's adventures, hoping the weather might improve a bit. 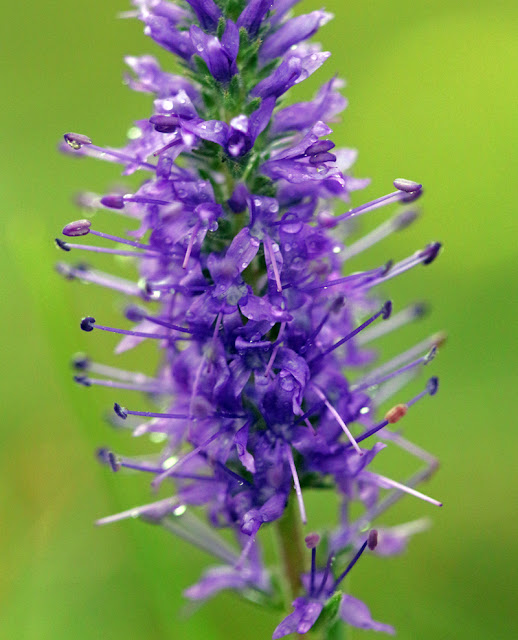 We never did find a Dark Red Helleborine, but I wasn't bothered about it. It had been a fanstastic day and there was always another time to look for those species I missed.


The Spiked Speedwell was without a doubt the highlight for me of the Great Orme. I'll be back one day, hopefully when the weather is nice!