- August 03, 2017
A visit to South Stack on Holy Island is a must when on Anglesey. It's a beautiful area with dramatic scenery and views. This is the view South East from above the RSPB car park with Snowdonia in the far distance. 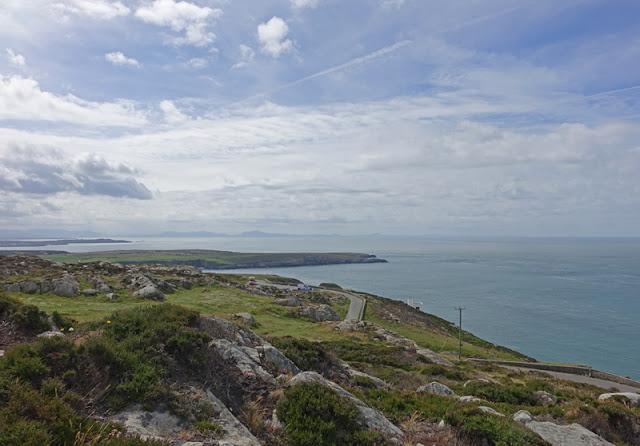 In botany, the area is famous for South Stack Fleawort, only found here in the whole world. However, I  might be too late to find any flowering now. We arrived in the morning to give us time to also look for Spotted Rockrose, the County flower of Anglesey.

So we parked in the car park and headed off up the coastal cliff path to see what we could find. The whole area was dotted with wildflowers but Sheep's Bit caught my eye. Being blue it stands out from the usual yellows and it would also be a great find in Kent where its rare. However, in the West of Britain it is a common plant. I do like them though. 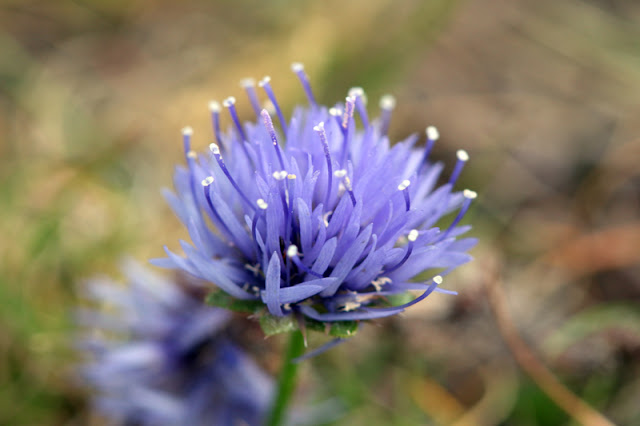 I started scouring the cliff edge areas (being sensible about it though) for the Fleawort. Again, the views were fantastic, this time downwards to crystal clear blue sea and unusual rock formations.

Here's a Wild Carrot on the cliff edge. I've forgotten now what the pink flowers are in the blurred foreground, but the cliffs were covered in Wild Thyme and also plenty of Bell Heather, so they are probably one of those species. 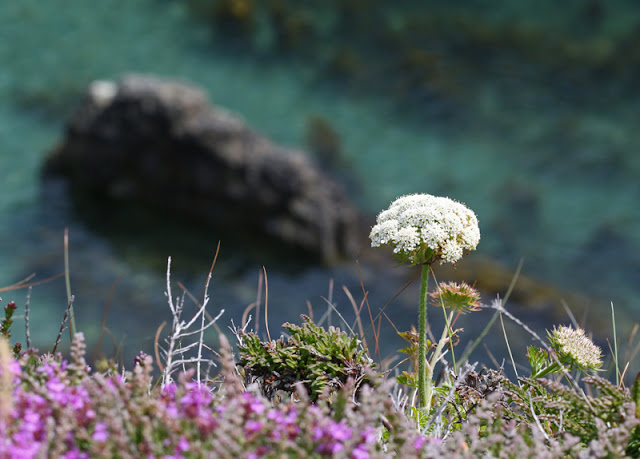 Here's a photo of the Wild Thyme, common on Kent chalk as well as here on Anglesey. 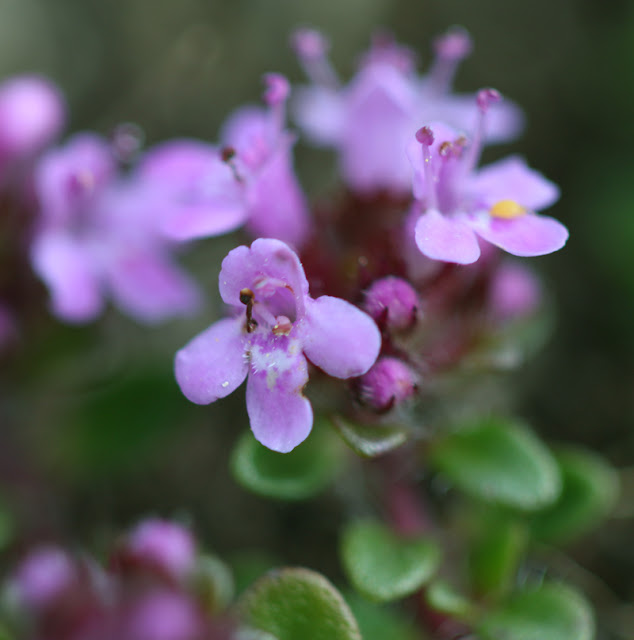 The following plant was a surprise find that I later found common on cliff tops, Bog Pimpernel. I'd previously only seen it in bog habitats, so I was very surprised to find it on the harsh habitat of coastal cliff turf.  However, when I looked closer, they grew in abundance only where plenty of rainwater flowed and pooled down the turf. This gave it a semi permanent wet habitat, much like a bog.  This day though, it was bone dry, so at first looked puzzling.

Beautiful little plants which would look great in a garden on a boggy rockery for example. I'd love to own enough land to create a multiple habitat garden stocked only with native wildflowers. 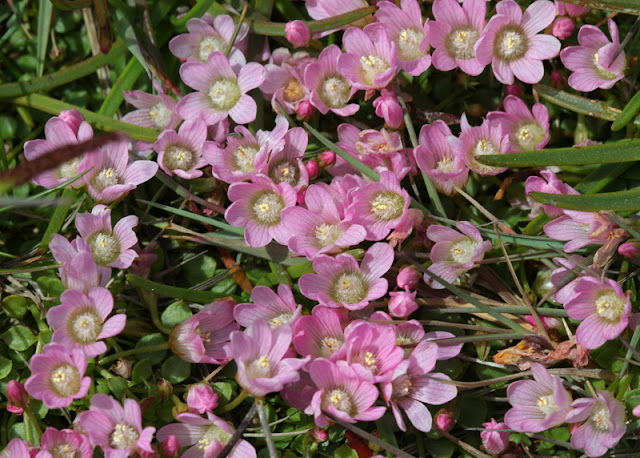 This is fairly common on Kent chalk, especially coastal areas and it was plentiful here also, it's Kidney Vetch. This is a very easy plant to identify as it's the only one with what looks like cotton wool stuffed in between the florets.   As you can see, the leaves are quite distinctive as well. 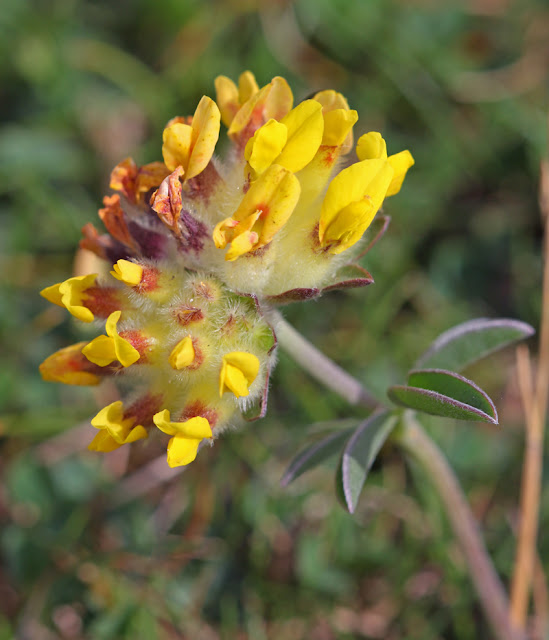 I've ony ever seen the yellow colour form of this in Kent, though I have seen red ones on Twitter from time to time.  I was thus very pleasantly surprised to find several large patches of the red form as well nearby.  Very impressive in red it is too! 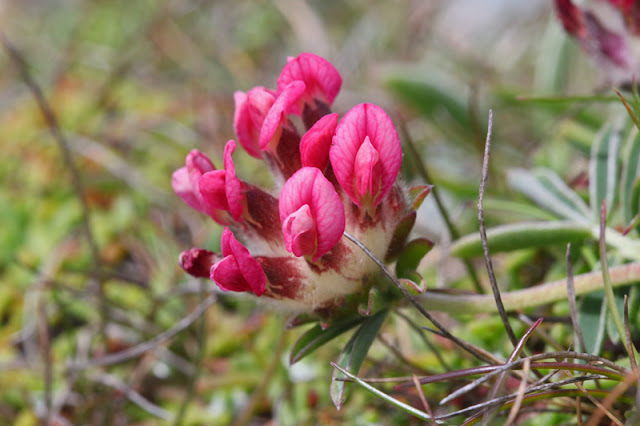 This area had previously had records for Spotted Rockrose and the Fleawort. The former little flowers drop their petals by noon, so we only had a couple of hours to find some. 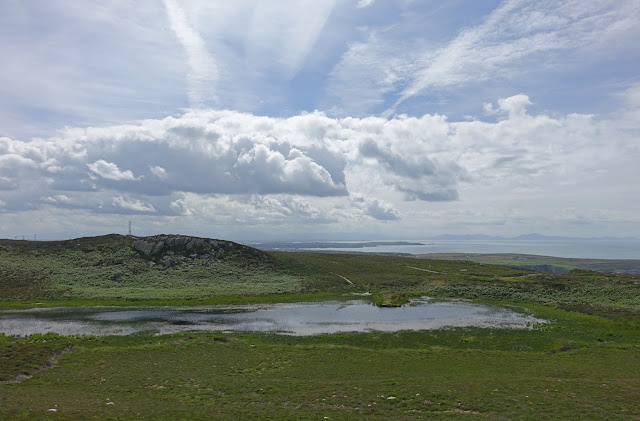 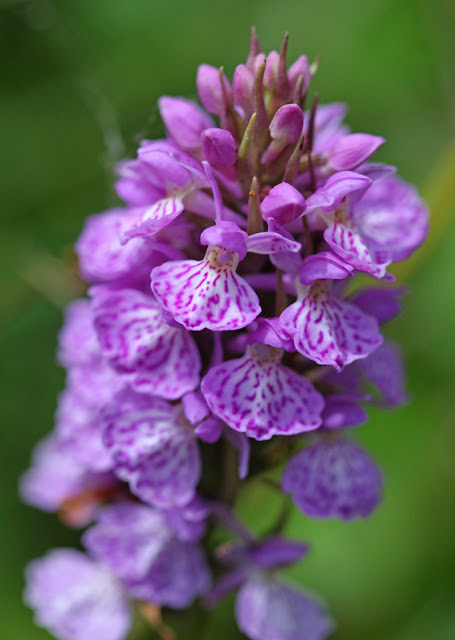 Alas, we couldn't find either species, though we all looked long and hard.

We did find some Heath Spotted Orchids though which was very nice thank you. 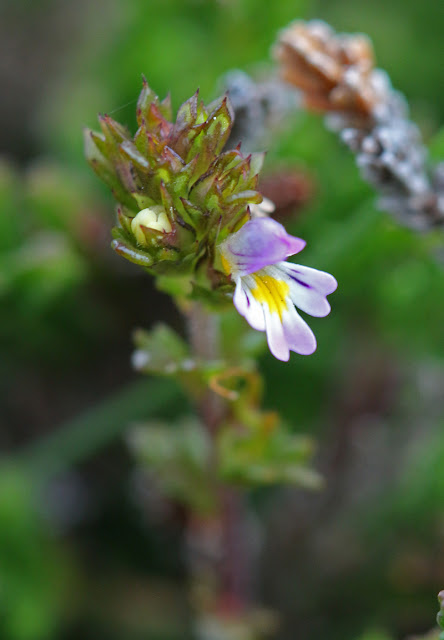 This plant is an Eyebright. It's very small but a welcome sight. Welcome because it is semi parasitic on other plants, often grasses, thus allowing a greater diversity of plant species in that area.

However, Eyebrights are very difficult to identify to species level, so I'll leave it as just an Eyebright.


These little pink flowers were Common Centaury. The harsh coastal environment reducing them to about an inch tall. Inland they can a foot tall, such is the influence of habitat.  When these are so small, it can be hard to determine which Centaury this is (there are a few different species). However, look carefully under the flowers and there will nearly always be a rosette of small  leaves. This together with light pink (or white) flowers and not having an elongated calyx identifies it. 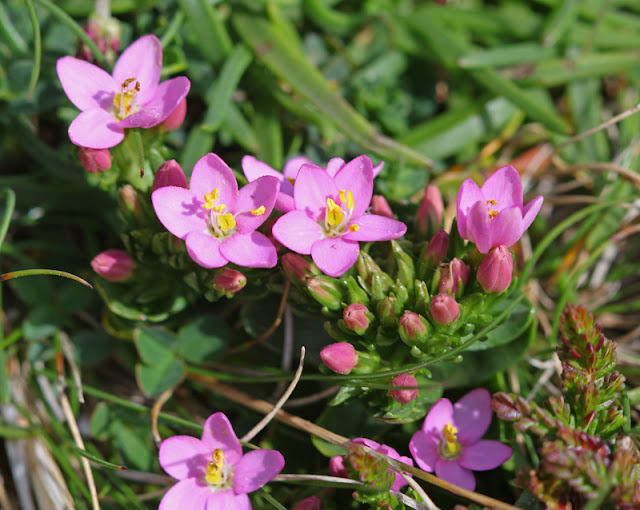 Here's another semi parasitical plant in the short turf. It's Lousewort, again uncommon in Kent, but very common in Wales. 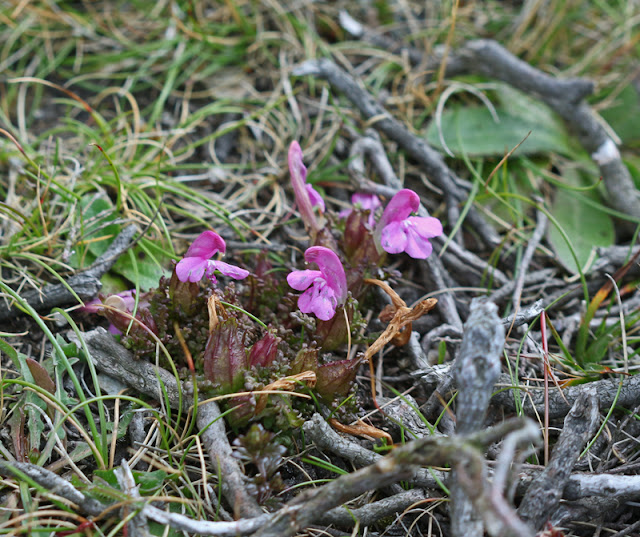 The odd patch of thistles were a feeding station for Burnet moths. I don't know if this is a 5 or a 6 spot or a narrowed boredered species. 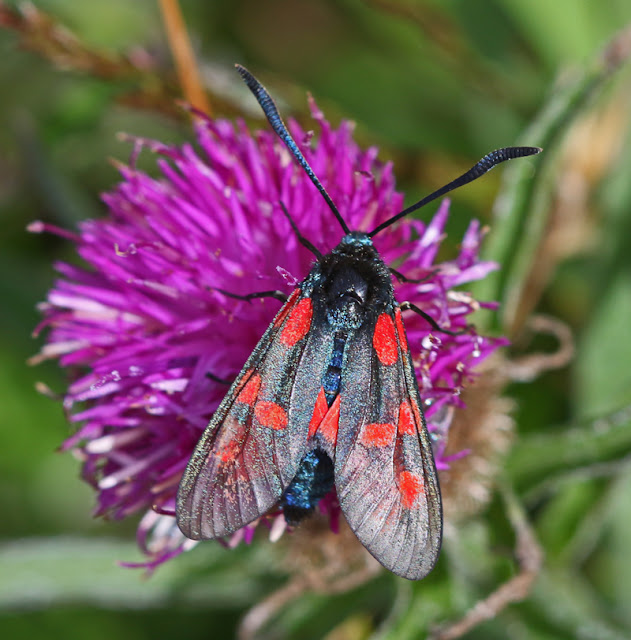 Drifts of Sea Campion adorned the cliffs, their single flowered stems nodding in the breeze. 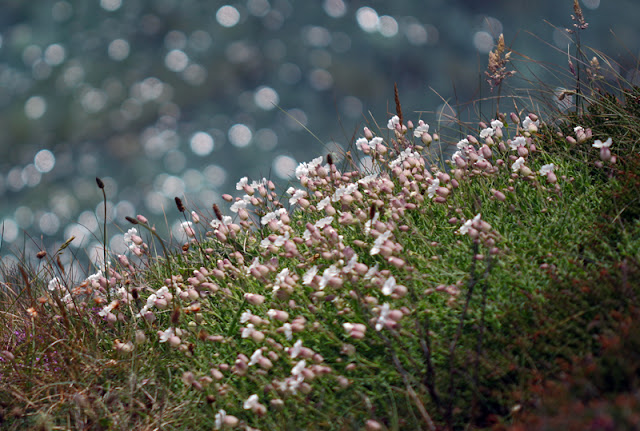 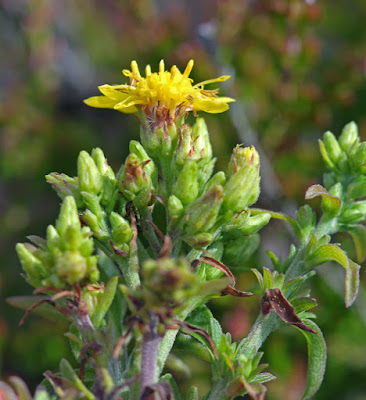 I then found what I thought was the elusive Fleawort form a distance, only to find it was an odd looking Goldenrod, growing solitary among the Bell Heathers.

Of course, any visit to South Stack must include a photo of its iconic lighthouse.
Rather than post the usual view of it (do a google search and you'll see what I mean) here's a photo taken from an abandoned building (possibly from WW2) on the cliffs above it. 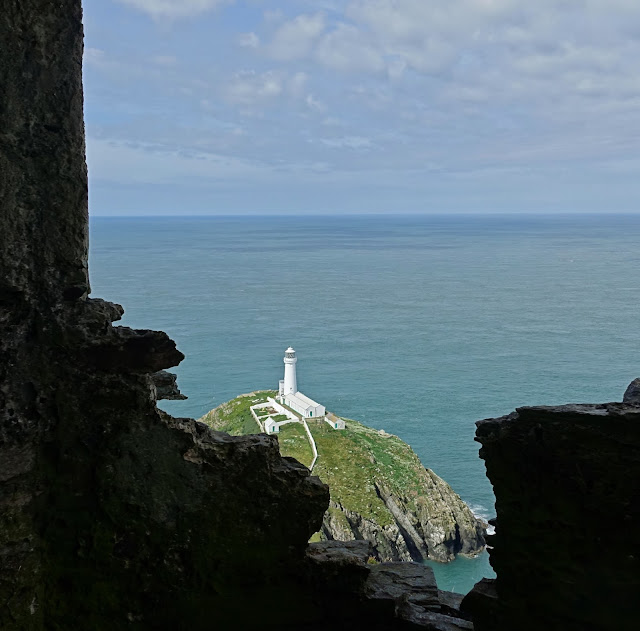 The area was criss crossed with ravines and headlands and I explored them all giving me a wonderful sense of freedom away from it all, with only the waves as background noise. No traffic, no people, no pollution, no noise, bliss. 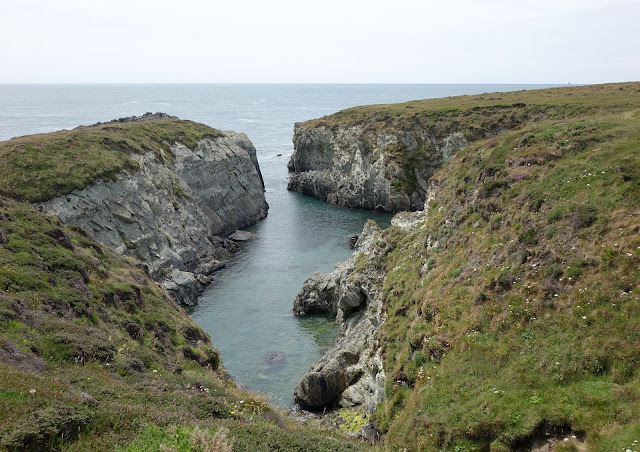 Another view to take your breath away. 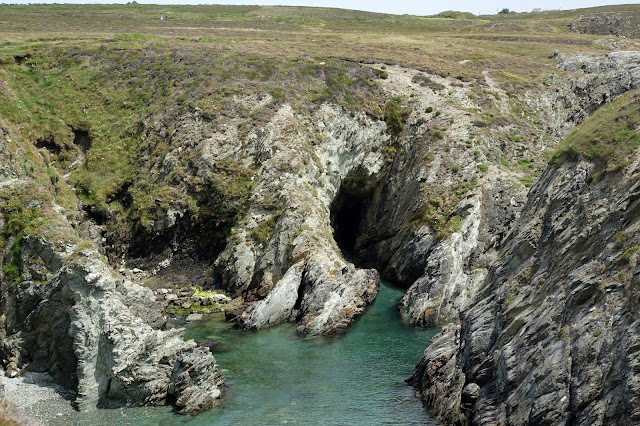 One area was full of Silver Studded Blues, their wings so blue they almost looked like Adonis Blues from a distance. 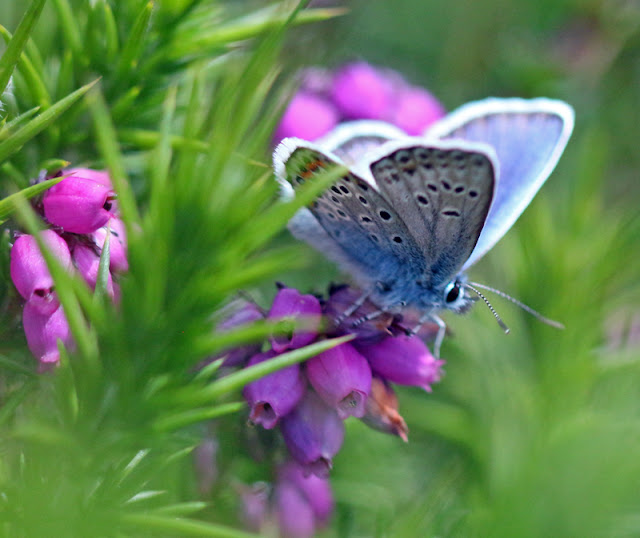 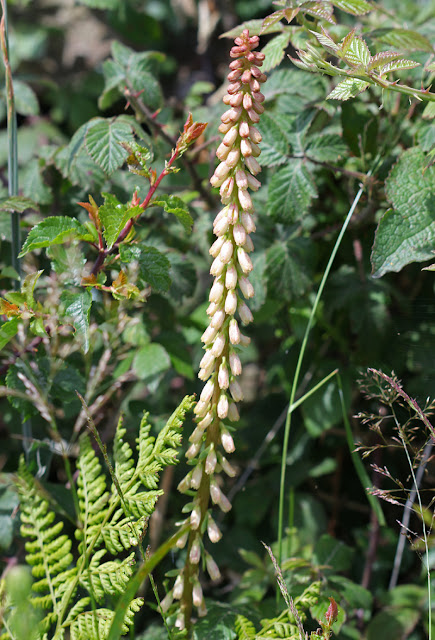 We found a single Navelwort growing out of the base of an overgrown old stone wall.

We explored all of South Stack and its surrounding areas only to find all the Spathulate Fleawort had already gone to seed. It was a shame not to see it, but it gives me impetus for a return visit another time. We failed to find Spotted Rockrose as well, but the heavy rain recently probably put them off flowering this day.

Here's me photographing the Wild Thyme photos above. 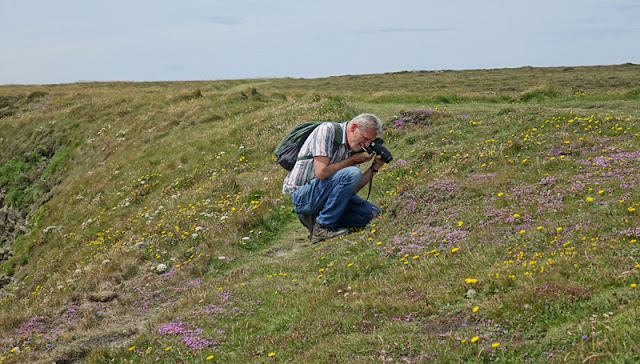 We left this stunning area and drove the short distance to Penrhos, just the other side of Holyhead. We didn't spend long here, but watched the ferries coming and going to Dublin and I explored the dunes behind the beach for a while. 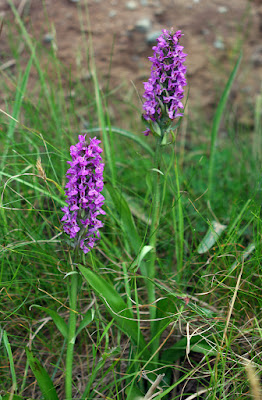 I was pleased to find a group of about 20 Northern Marsh Orchids at the back of the dunes. 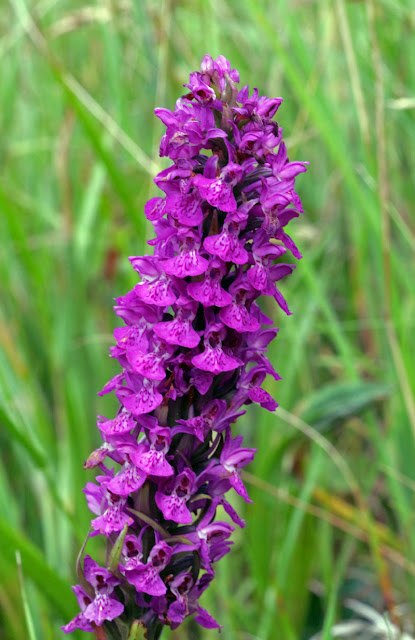 
I really like the deep purple colours of this marsh orchid. The Southern Marsh Orchid by comparison, appears duller, being (usually) a light pink with less diamond shaped lower petals. 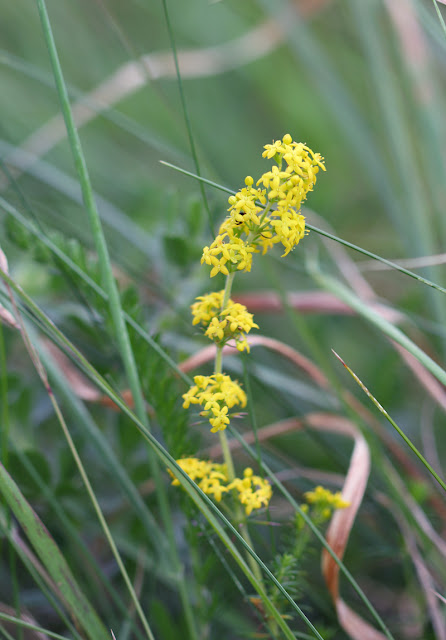 Ladies Bedstraw was common as it sometimes is on sandy coastal areas in Kent.

The next plant is Sea Radish, supposed to be very common, but this is the first one I've seen. It's much like the inland Wild Radish but with bright yellow flowers. 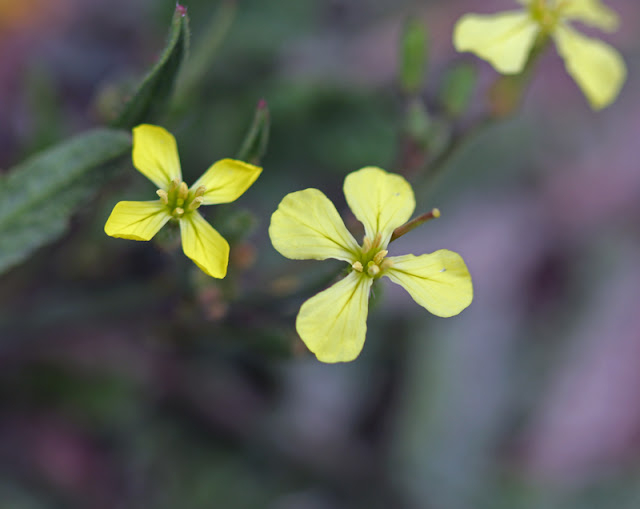 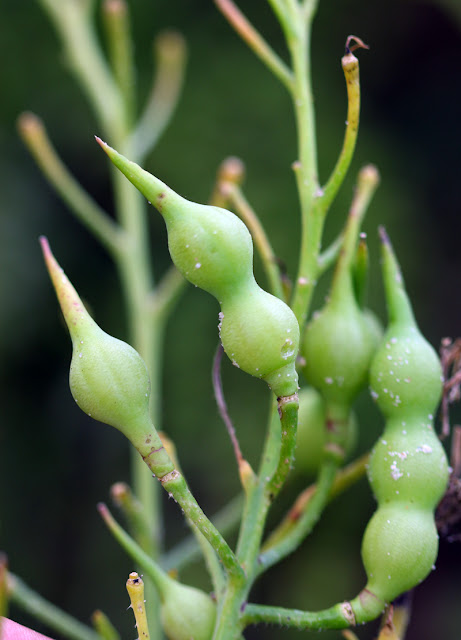 So ended another glorious day on Ynys Mon, or Anglesey to us English folk. I'll leave you with another photo of a Silver Studded Blue from South Stack. 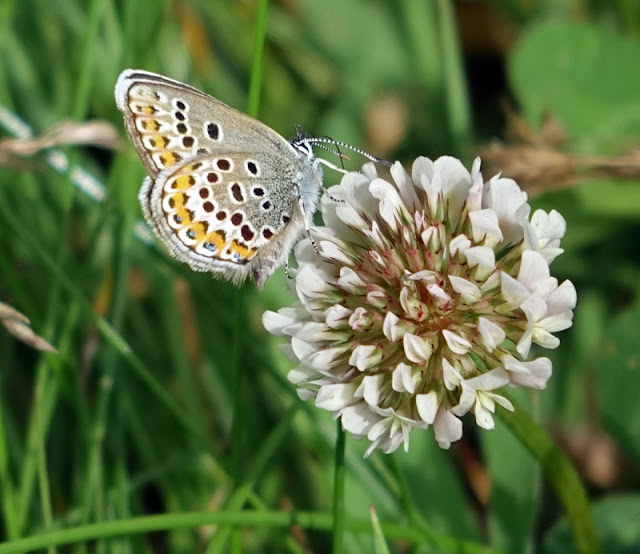