As usual at this time of the year, I have fallen way behind in writing up my blogs. The warming, lengthening days and the explosion of species coming into flower, means I spend much of my free time out and about recording and photographing. As such, here's a selection from April of some amazing rare and beautiful common plants I found.

First up is a special rare plant only found in Kent and Bedfordshire (to my knowledge), the Grey Mouse-ear. I don't think anyone really knows if it's a native or ancient introduction. 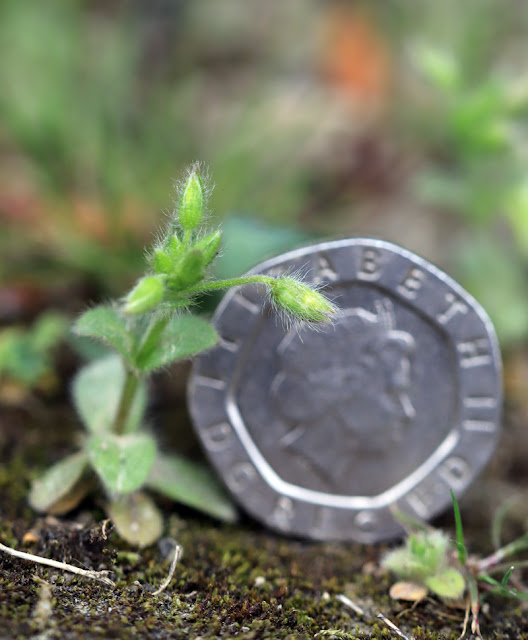 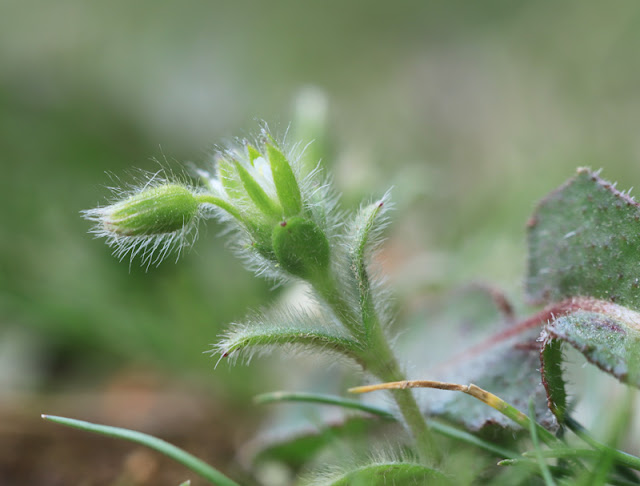 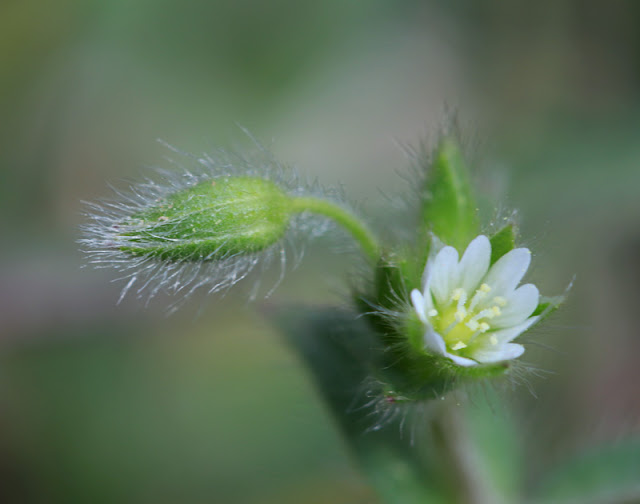 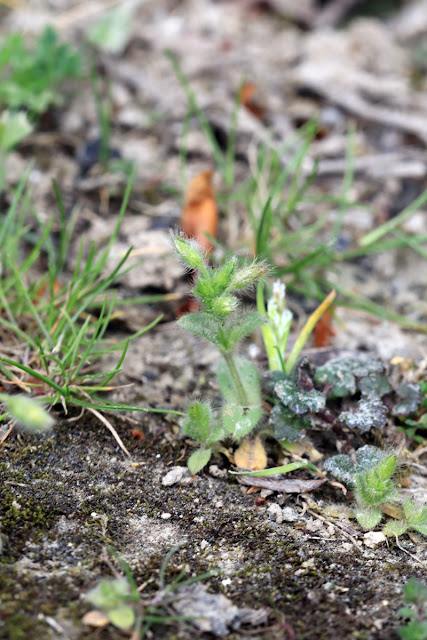 There were about 10 plants seen on a narrow compacted field edge on the Southern edge of Churchdown Woods, Fawkham.


When I first found this new colony, there were hundreds along the edge. The following two years, the field was heavily sprayed and I saw none at all, so I am pleased they weren't totally wiped out. 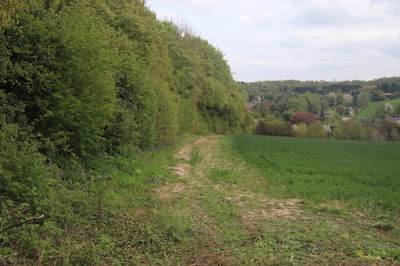 Here's a habitat photo for the Grey Mouse-ear, they were on the last bit of compacted soil before the trees.

Certainly in Kent, the usual Hawthorn tree is usually - just a Hawthorn tree. However, sometimes the leaves look wrong and on examination of the flowers, I found this to be Midland Hawthorn where all flowers have 2 styles. Normal Hawthorn only has 1 style in each flower. If you find flowers with a mix of 1,2 or sometimes 3 styles, it's a hybrid between the two. 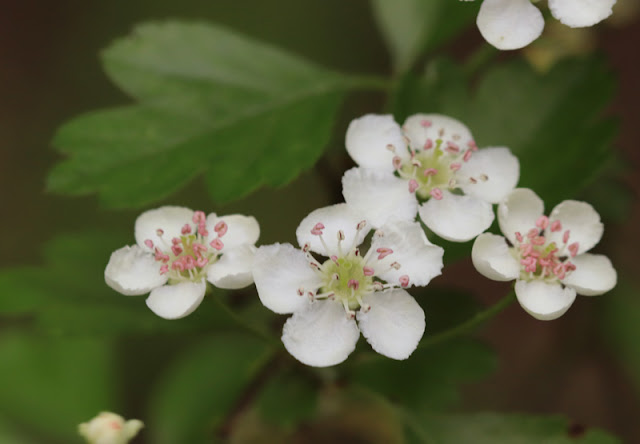 Early Purples Orchids had just started flowering in the last week of April, as often the case, at the same time as the Bluebells. 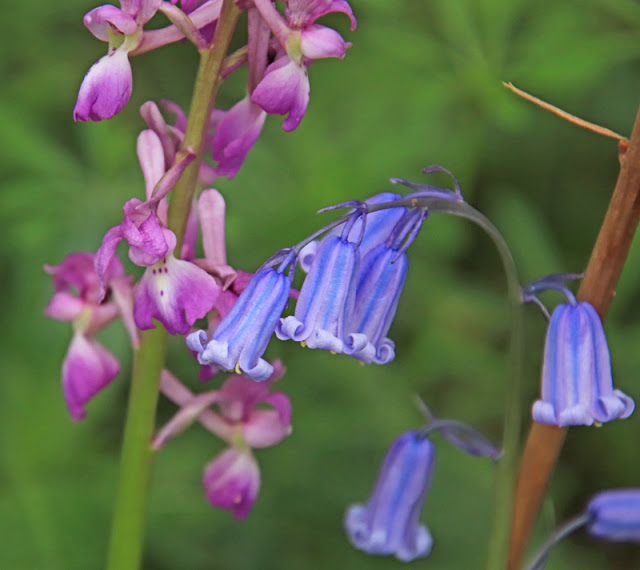 Wood Melick is probably the easiest woodland grass to identify when it flowers. 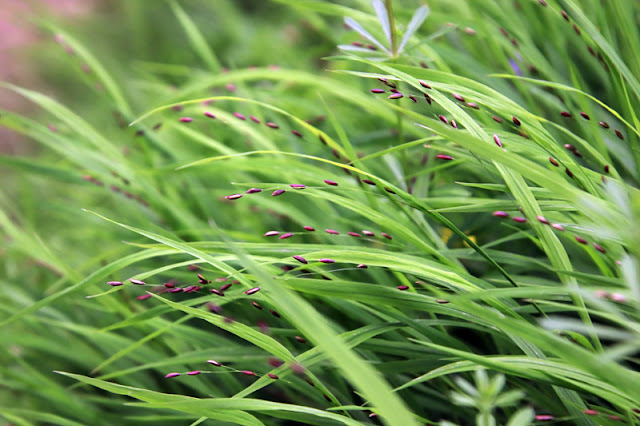 A nice Tortoiseshell on a Buttercup. 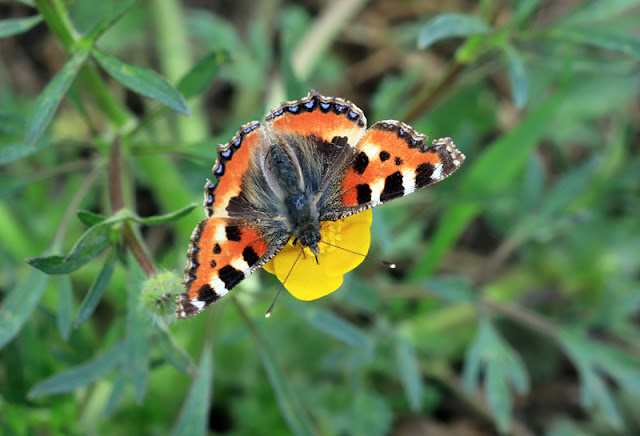 I see these Common Field Speedwells everywhere, but this is the first white form I've ever seen (though there is a tiny hint of blue). 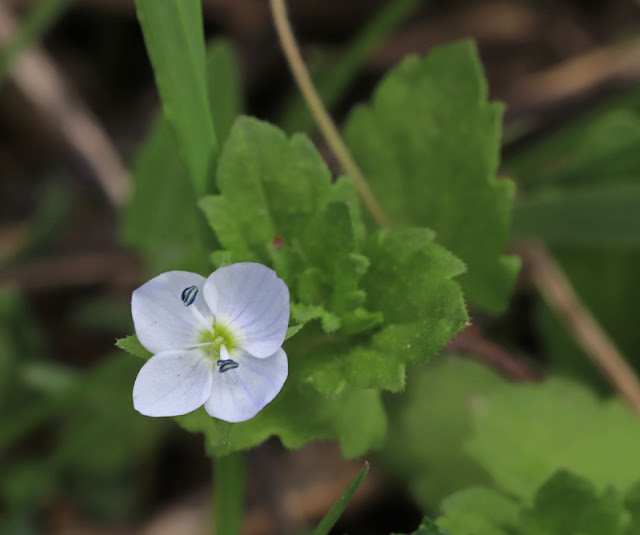 All the above were in or around Churchdown Woods, nr Fawkham, Kent. The next selection is from Samphire Hoe and Dungeness on the coast at the end of April. 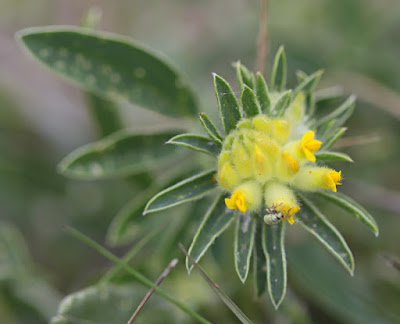 The first Kidney Vetch in flower on the natural cliffs of Samphire Hoe. 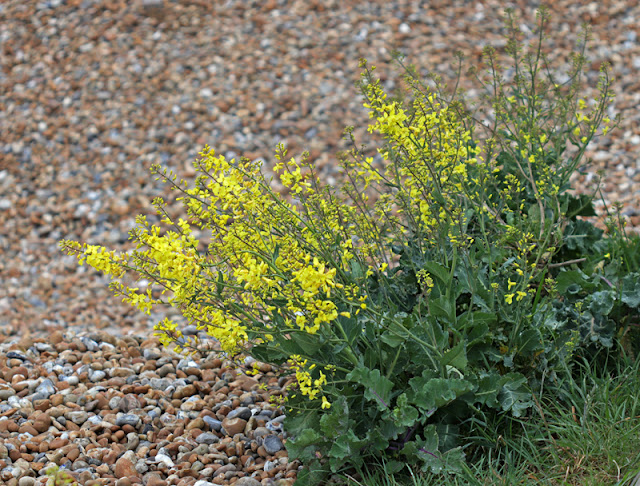 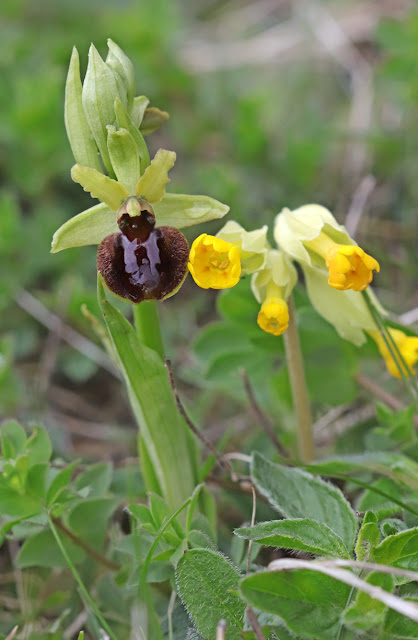 As in most years at this time of year, there were hundreds of Early Spider Orchids on the Hoe by the railway line. I particularly liked this shot as the Cowslip sets off the orchid nicely.


However, I wanted to find some on the cliffs at the far Western end of the Hoe and I found plenty there as well 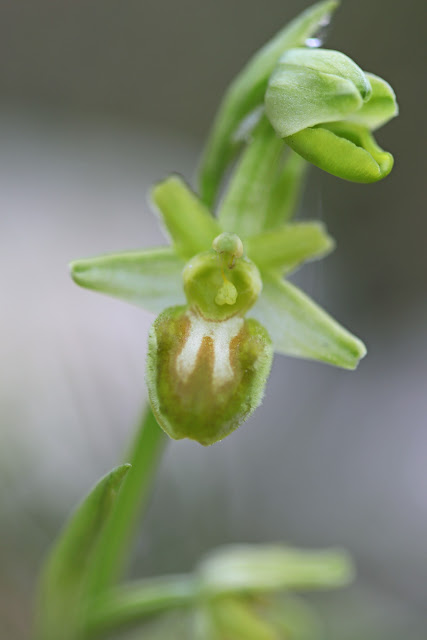 The star find here was this variant Early Spider, almost completely lacking in red pigments, though it was a weedy, small plaant! 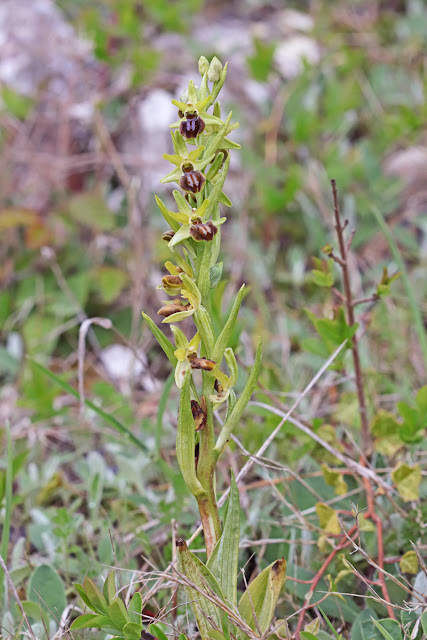 However, there was another wonderful Early Spider Orchid that I found. Normal looking flowers but a giant of a specimen.

Including the gone over flowers, I counted 14 flowers on this plant! This beats the 12 flowers I found on a Bee Orchid once.


The last unusual orchid was this one with deep coloured wings which are usually a pale green. 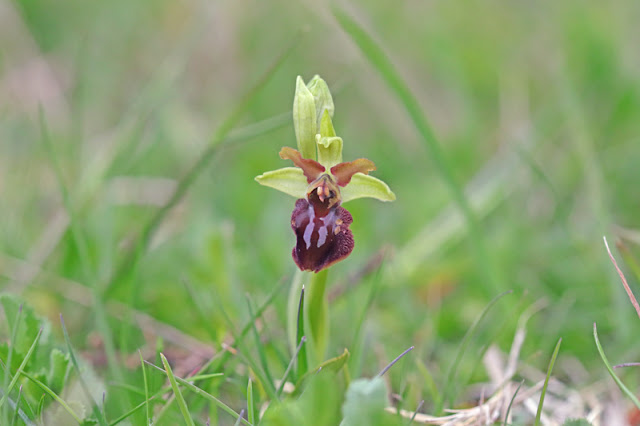 Here's a habitat shot of the cliff base habitat for these wonderful orchids. 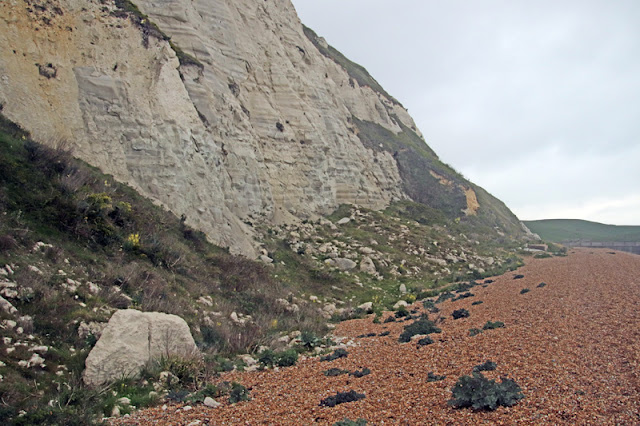 From here we went to Dungeness, though time was now short. 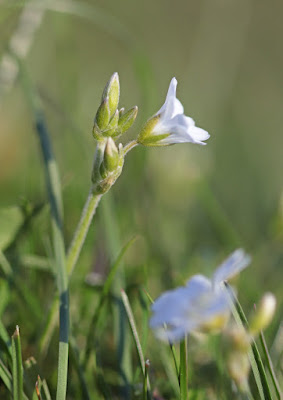 Near the old lighthouse was what looked like a Field Mouse-ear, but it had a greyish appearance and was too hairy.  Nearby was a large patch of Snow-in-summer, a garden escape naturalised on the shingle.


I later had it confirmed that this is the hybrid between Field mouse-ear and Snow in summer. It has been recorded here before but was the first time I'd seen it. Of note is that there were no Field Mouse ear to be seen in the area. 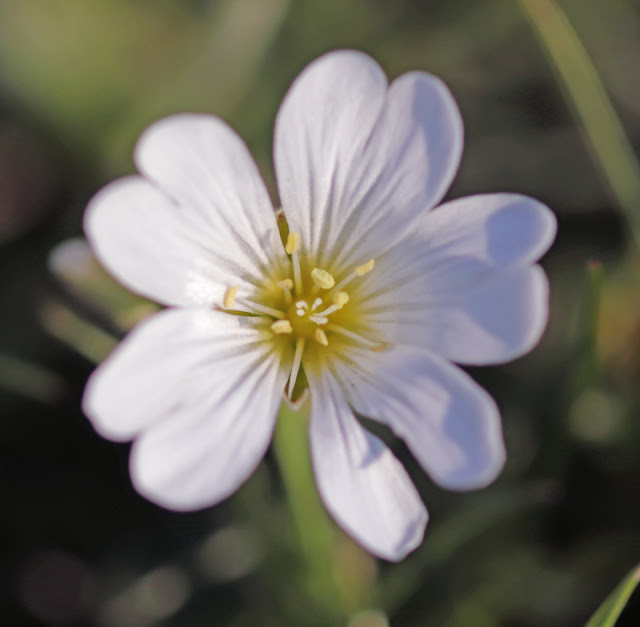 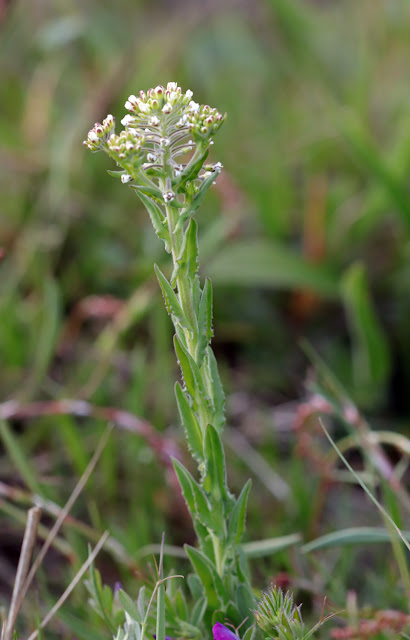 Near the Long Ponds were just two spikes of Field Pepperwort, a rare plant but often found in coastal areas in Kent. 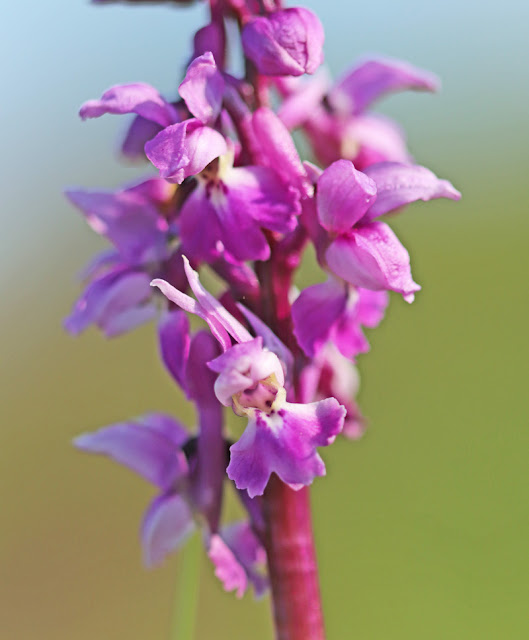 Near the power station were around 20 or so flowering spikes of Early Purple Orchids. It looked odd on shingle and not in a wood!

There were thousands of the scarce Shepherd's Cress on the old shingle ridges. 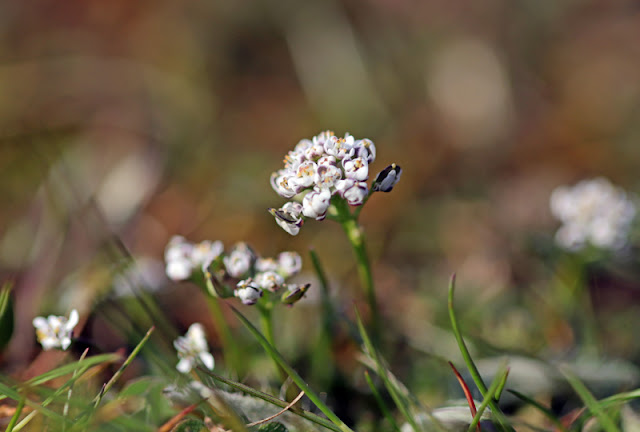 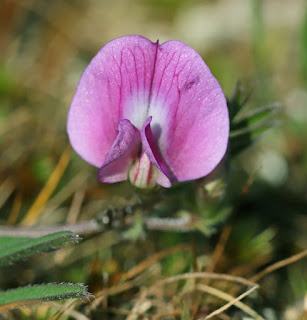 Dotted everywhere like tiny puple dots in the short turf were thousands of Common Vetch. These were so small and stunted that I thought they may be Spring Vetch, but a closer examination showed they weren't. Many had 2 or more florets and the leaf and flower arrangement was wrong.

The prostrate form of Blackthorn was also on the shingle around the Long Ponds, it's quite odd seeing this as a prostrate bush and not in a hedgerow or as a small tree. 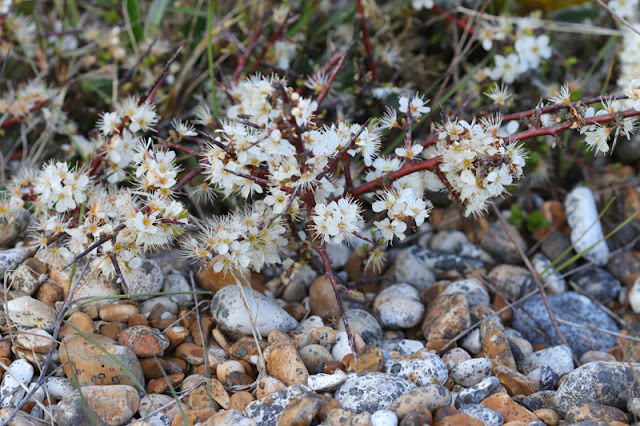 That's about it, I've left out a lot of flowers but I hope you liked the selection.