- May 01, 2018
Marden is best known for its nature reserve containing thousands of Green - winged Orchids and the monad this is in is heavily recorded for plant records. However, as is often the case, the monads around and outside of the reserve had very few records. So I set about finding some to even things up a bit. Early Spring isn't the best time for high numbers of species, but I do find species that have disappeared by the time the warmer weather comes (sometimes called ephemerals). 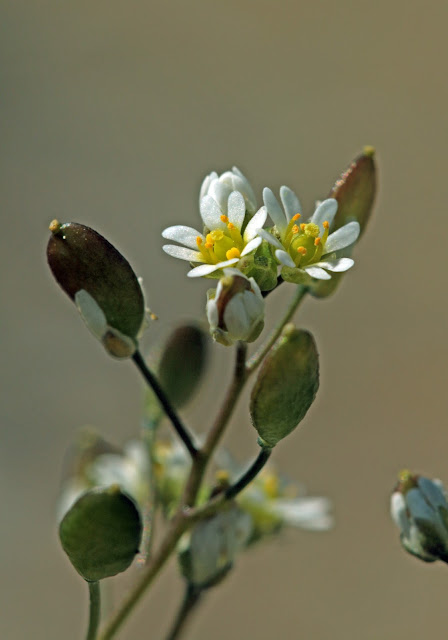 One such Ephemeral is the humble Common Whitlowgrass, which is in abundance during March, but has completely disappeared in Kent by May. 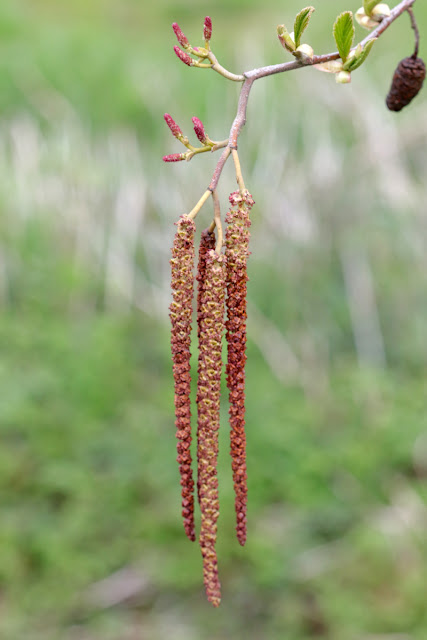 Trees are always worth looking out for and their "flowers" make them easier to identify at this time of year.

You will often find this tree next to (or in) water and this was by a wet water filled ditch.  It is of course the Alder tree.

This photo isn't pin sharp, but I prefer to photograph flowers on the tree and not pick them off and it was a breezy day! 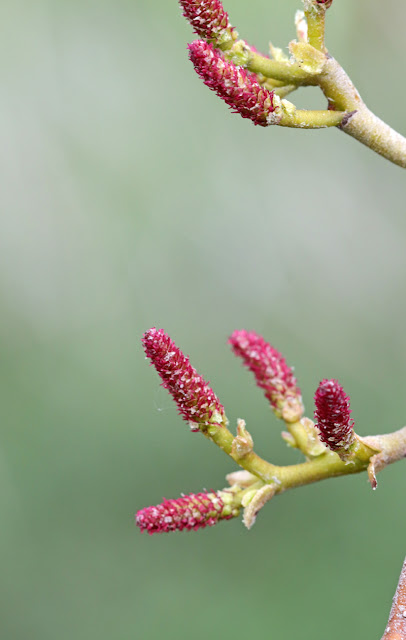 Hanging down are the male catkins that shed the pollen.

Left are the short, stubby female flowers that form into oblong cones in the summer and remain on the tree until well into winter. 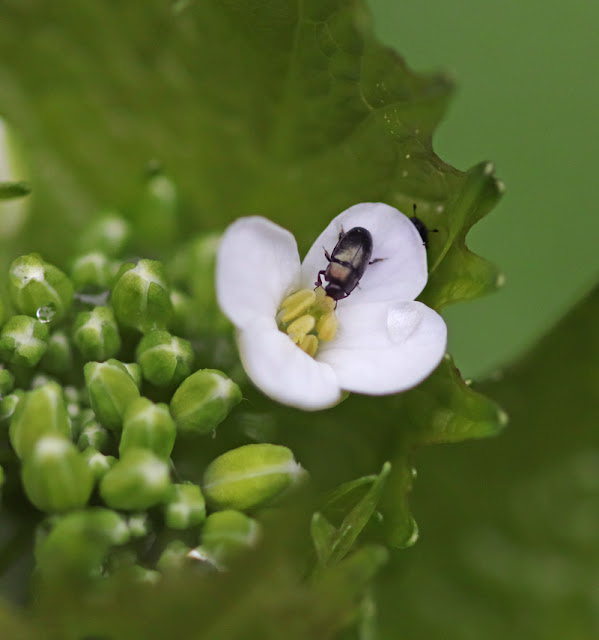 Their leaves are often visible through much of winter and are easily identifiable even without flowers. If in doubt, crush one and you can smell a hint of garlic. 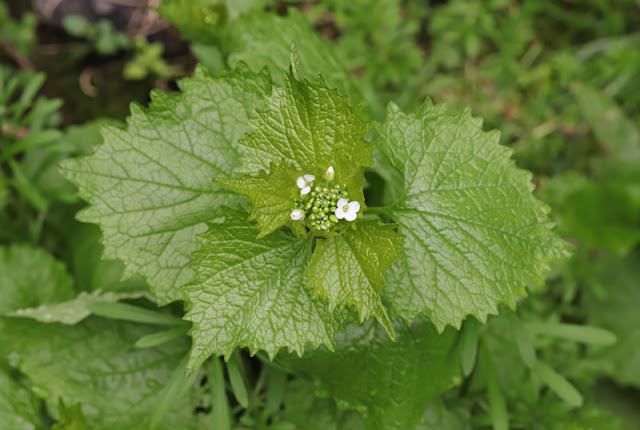 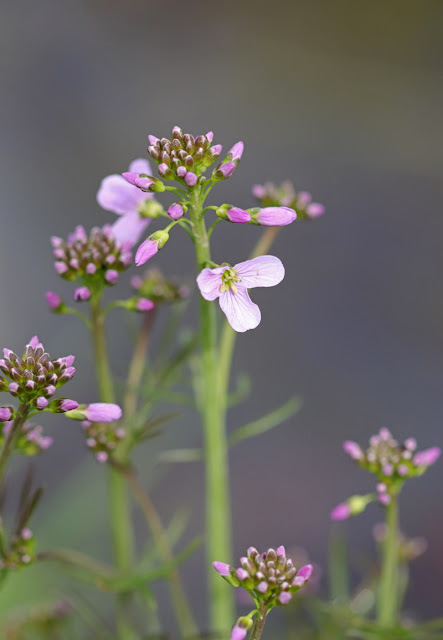 One of the joys of Spring for me is seeing swathes of Cuckooflowers or Lady's Smock.

They like damp areas and many a rural road and some A roads are lined with them.

Of course, growing on the banks of roadside ditches means they escape the mowers so are still doing quite well in the south east. 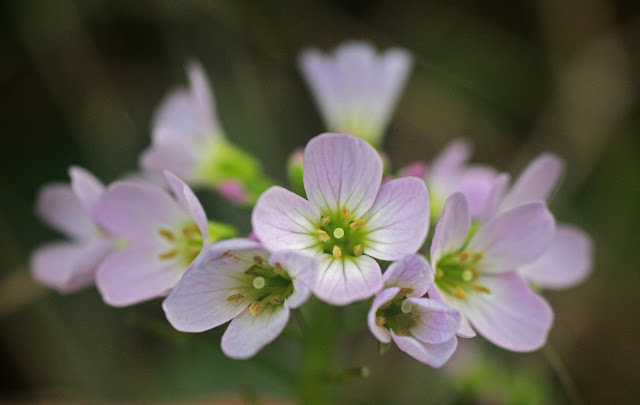 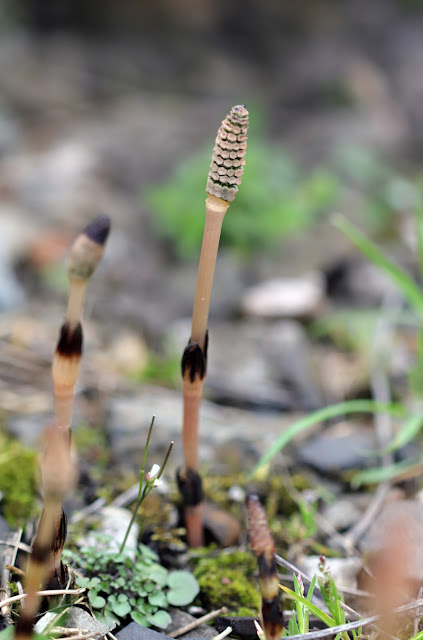 In a typical habitat location, by the railway line, were drifts of Field Horsetail. Their green spindly fern like leaves will appear later.

A single flower of Shining Cranesbill was also in this area. 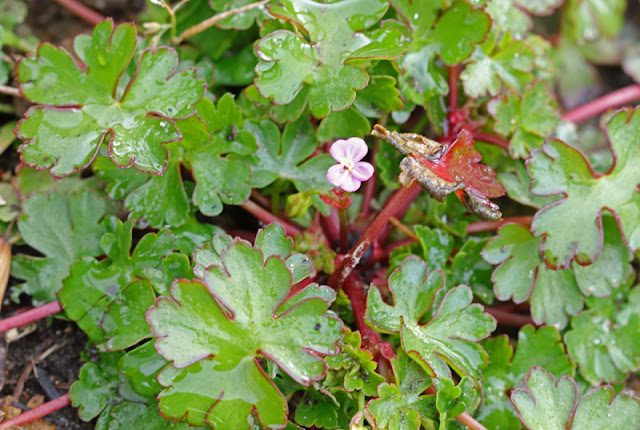 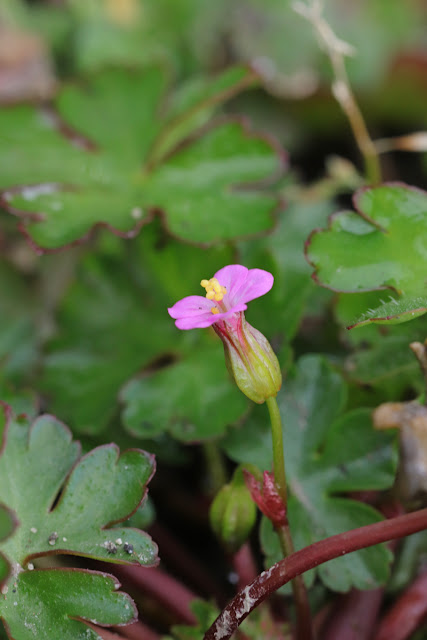 Their elongated calyx (bit beneath the petals); no notches in their petals, bright pink colour and reddening to the leaves make this one of the easier cranesbills to identify. 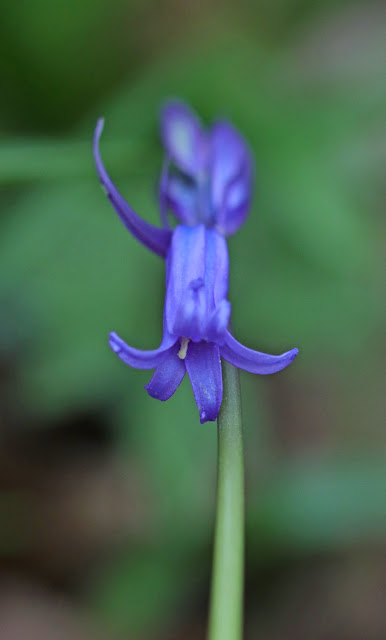 One of the first Bluebells in flower in my area was found, unlike now where there are huge drifts of them caarpeting most woods around me.

On the path I noticed lots of these bright red catkins. I'd need a very long ladder to photograph them on a tree as they belong to the hybrid Black Poplar tree, which is invariably over 20 metres tall. 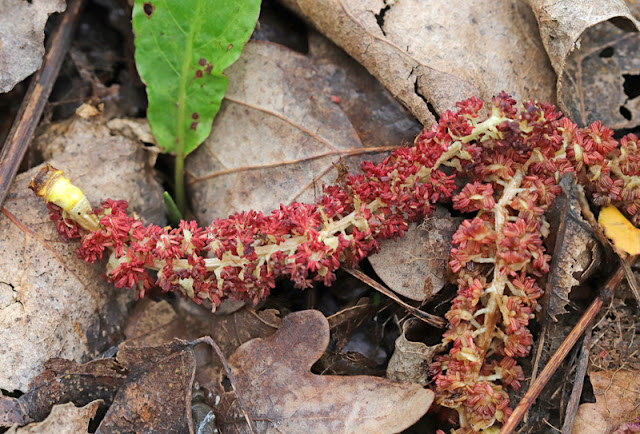 Wood Forget-me-not was appearing in large numbers. They have bigger flowers than both Early and Field Forget-me-nots and patent (sticking out) hairs all the way up the stem. They also lack hooked hairs on the calyx. When looking at these always check the hairs on the upper and lower stem and calyx, flower size, colour and shape. Keep a note (or photo in my case) and you'll be able to identify them all.

I would also recommend looking at the videos for Myosotis identification by Lliam Rooney  at https://bsbi.org/kent which is the Kent Botanical Recording Group's page of the BSBI. There's several other species listed as well, have a browse. 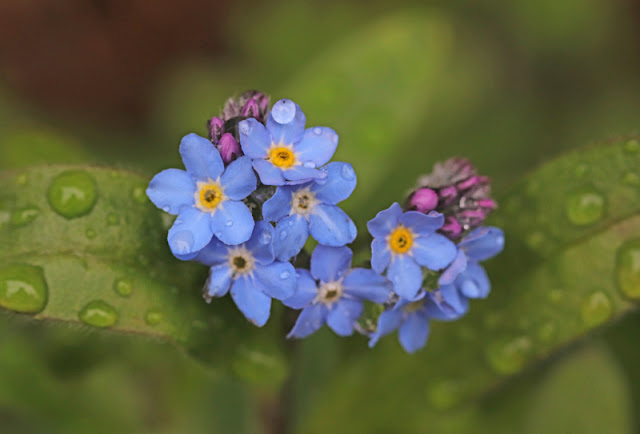 Cherry Plum is the first Cherry to blossom and does so before its leaves appear. It's flowers are almost identical to Blackthorn and both plants can have thorns. Look for reflexed (bent backward) sepals (under the petals) and green twigs to differentiate it from Blackthorn. Though I must admit, big thorns are rare on Cherry and all usually all over Blackthorn. 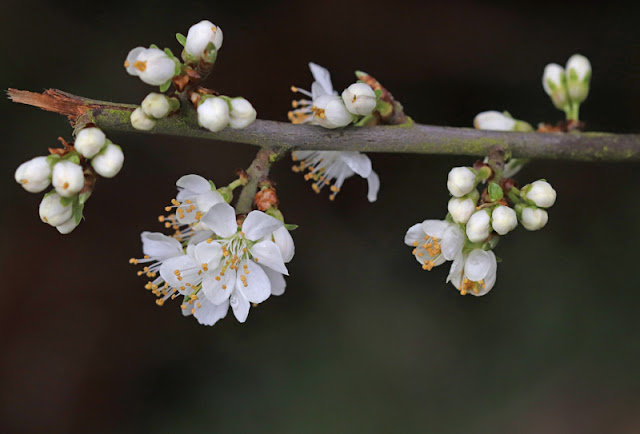 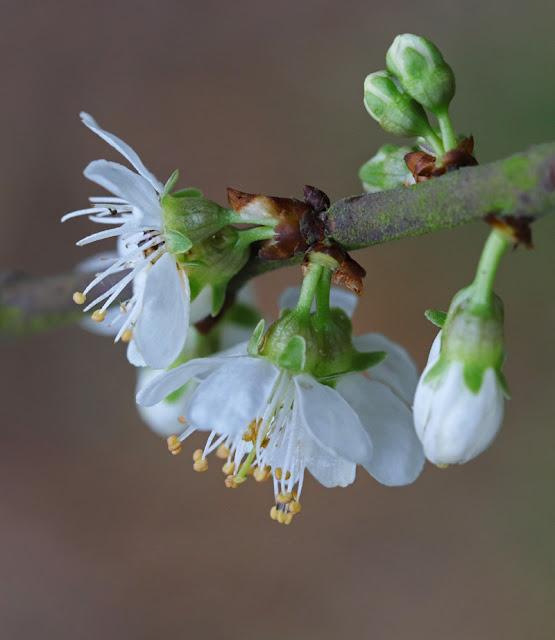 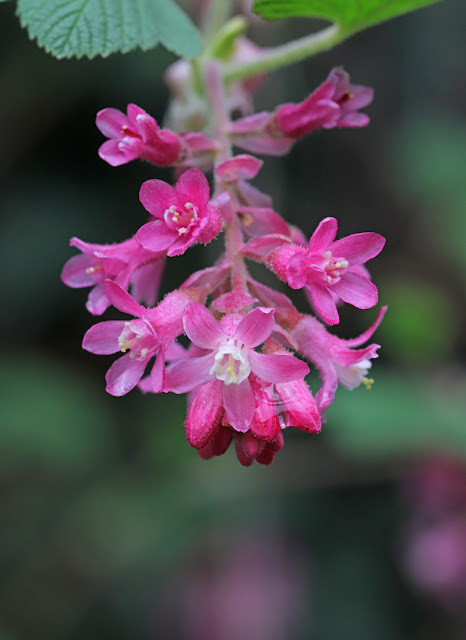 Railway lines are the perfect habitat for many plants, but increasingly for assorted garden escaped species.

These places are rarely sprayed or mowed and not improved.


This is the attractive (but foul smelling apparently) Flowering Currant. 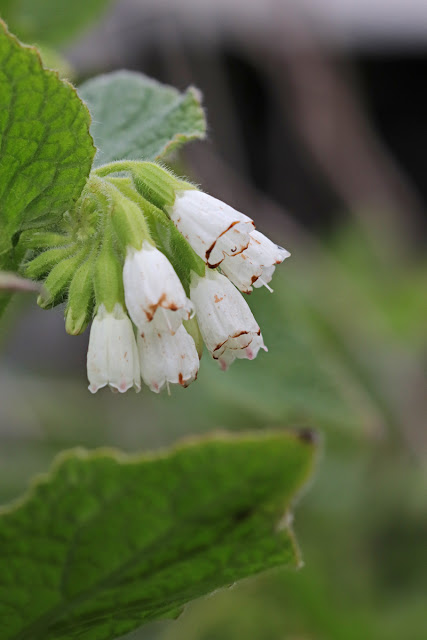 Comfreys are a lover of waste ground as well, and it's not unusual to find garden varieties scattered about.

Apart from the colour of the petals, a key point to look for with these is how the leaves attach to the stem.

Look in a field guide and you'll see what I mean 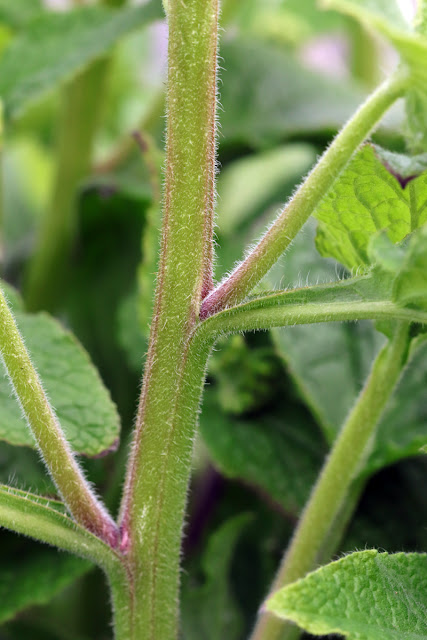 
Shown here is the main stalk with the leaf join running all the way down it to the next leaf, showing this to be Common Comfrey. It would help a lot if field guides put pictures like this in their books. 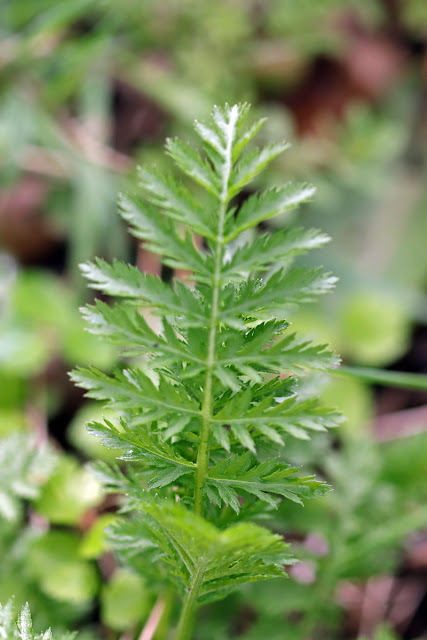 I can identify many plants without flowers, just from the form of the leaves.

Here's a good example of one easy to identify from the leaf alone, a Tansy.


This trip was planned as a simple botanical recording trip and I didn't expect to find a species I'd not seen before somewhere else. Apart from the reserve with the  Green-winged Orchids, Marden isn't on a "must go to" list for botanical marvels.  However, I proved myself wrong by finding the next plant below. 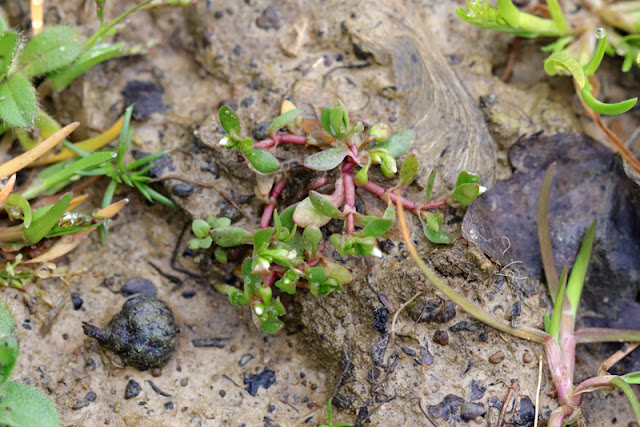 From standing height it looked a bit like a fleshy Common Chickweed, but the redness of the stems got me kneeling down for a better look. It was on a wet, bare patch of mud that no doubt dries out quickly to baked cracked clay! 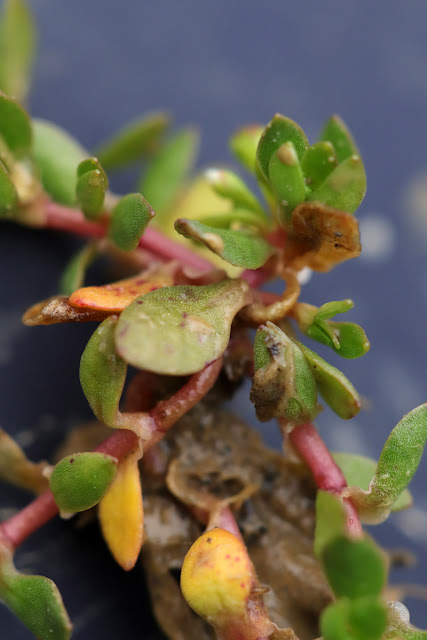 Unfortunately. it's flowers were in bud with none open and I later identified it from my books to be the humble Blinks.


I hope I get back to see it in flower and take some better photos, though at the time of writing (30/04/18) it's absolutely pouring down with rain and will last around 24 hours, so I doubt any petals would be left! 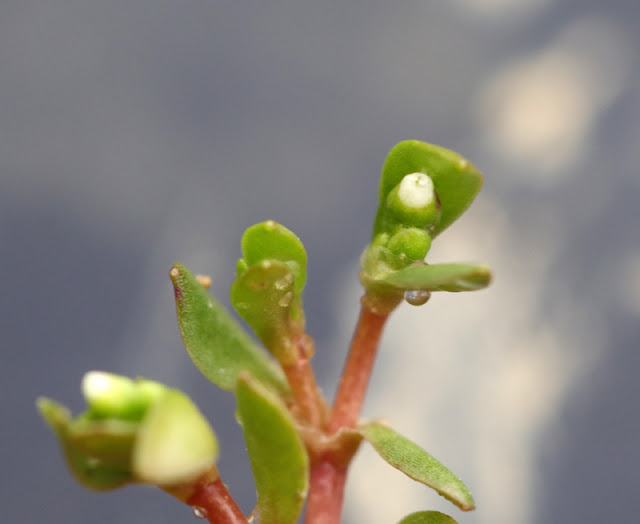 I thoroughly enjoyed my tip around Marden and I resisted the urge afterwards for a peek in Marden Meadows to see if any orchids were out, I'll wait until there's thousands!