- August 11, 2018
This was a follow up trip from the 1st May to the Brecks to find some other later flowering rarities. We had a good idea of where to go but will give special thanks to Karen Woolley and Brian Laney who helped out with specific areas at some locations. On a single day trip, there isn't much time to explore and find one's target plants without such information.

One such tip Karen gave us was to stop off en route in North Essex to see some magnificent rare plants. On the way to it we passed numerous Knapweed Broomrapes, sadly gone over. Needless to say I got lost, but eventually found an unassuming country lane with  an unmown verge.
This is that verge!

This is the amazing Crested Cow-wheat, a hemiparasite and very rare. It is absent from Kent and East Sussex and there are only a few colonies left in Essex and the surrounding counties.

Given its rarity and beauty, forgive me for adding several photos of it.

If that wasn't enough, there was another very rare plant hiding amongst the Cow-wheat, Sulphur Clover.

Similar to White Clover, but with bigger flower heads in a sickly yellow colour - like sulphur!

The next photo shows both the Crested Cow-wheat and Sulpher Clover growing together.

A habitat photo for both of these rare plants. 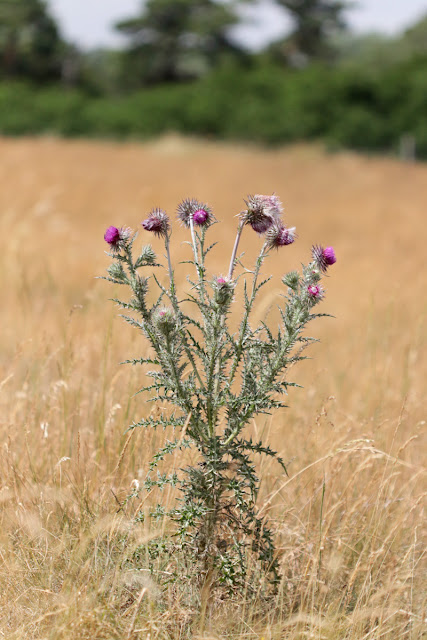 We then drove North to a venue on the Brecks in Suffolk. The grass was parched, brown and pretty much dead, but several wildflowers were shrugging off the drought conditions.

This is a Musk thistle with its obvious nodding flower heads.
I have seen it in Kent but it's quite rare to find it locally to me. 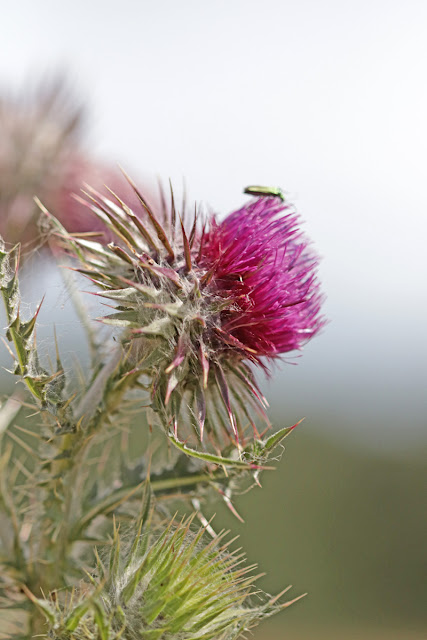 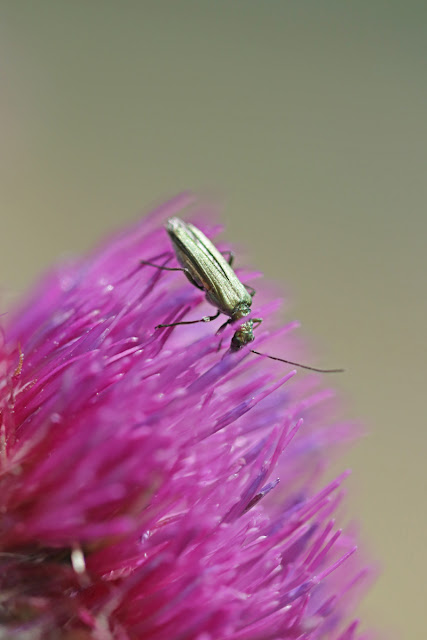 and a close up shot of the beetle in the last photo.

Near to the car park were hundreds of Maiden Pinks. This is another very rare plant in Kent and one I've yet to find in my own county. Here there were so many that there were plenty of colour variations in the flowers, though the scorching sun made photography challenging to saay the least and I failed to get decent photos of the all white variants. 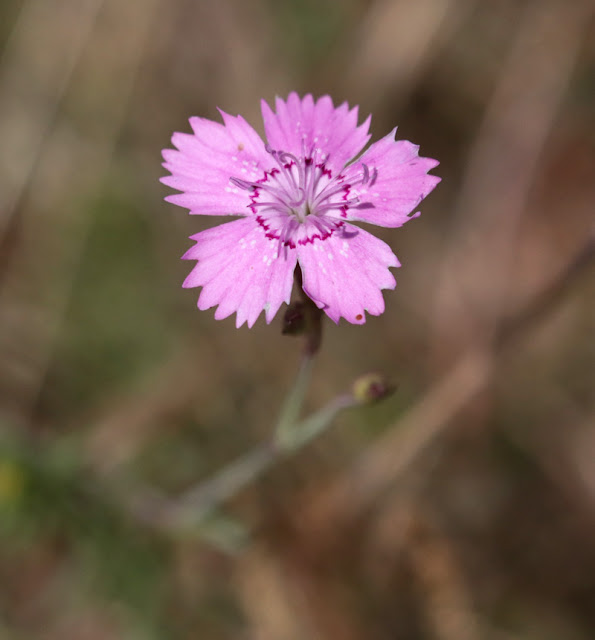 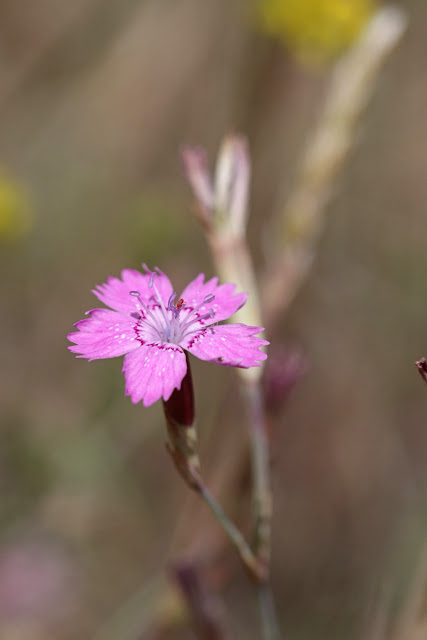 When looking at my photos later when we got home, I was alarmed to see several ticks on the flowers. The photo on the right shows a red tick on one of the anthers.
Be careful before you sniff one up into your nose!!!

All joking aside, take precautions against ticks as they can carry Lymes Disease. Google it and you can see how nasty this infection can become.

I rarely wear shorts when out, even in intense heat, and tuck my trousers into my socks. Check your arms over after laying down taking photos of plants as well.

Ticks are numerous where there are animals such as sheep or wild animals like deer, as here.

Along a road verge I found Alfalfa or Sickle Medick, the yellow flowered and much rarer form of Lucerne. 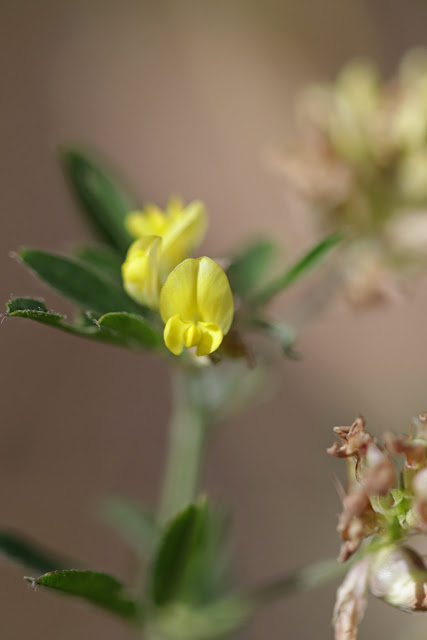 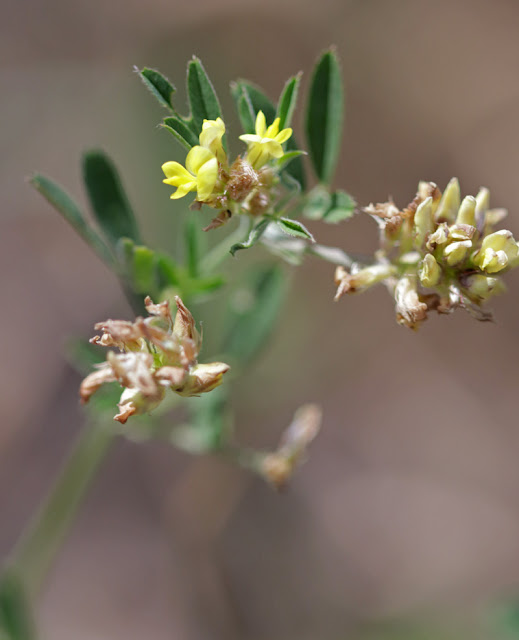 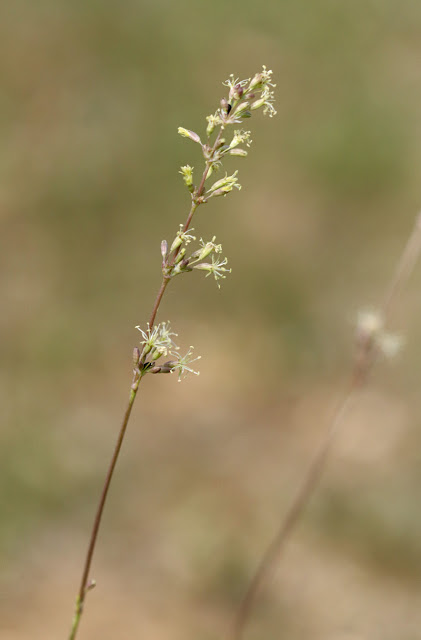 We drove on to another venue after this

This spindly looking plant is related to Red and White Campions, it's the Spanish Catchfly, another rarity and speciality of the Brecks. 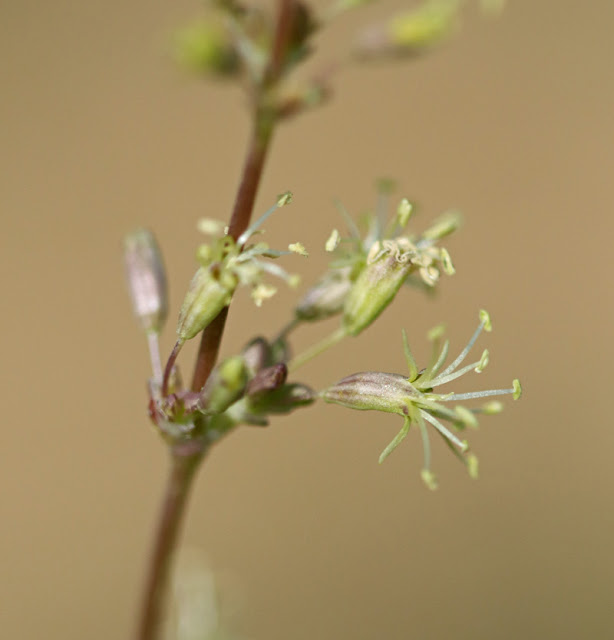 It was quite breezy and an open meadow, so photos were very difficult, but a fast shutter speed got me some nice shots. This species features in the Back from the Brink project mentioned in a previous blog. 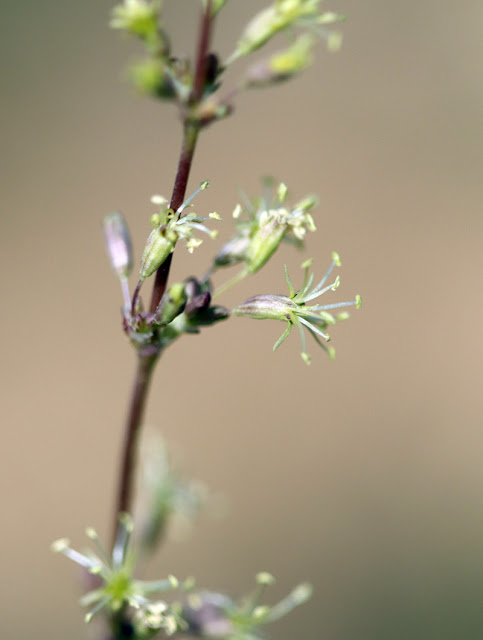 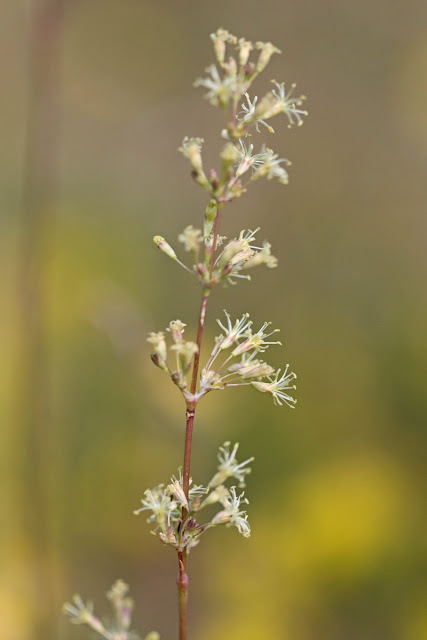 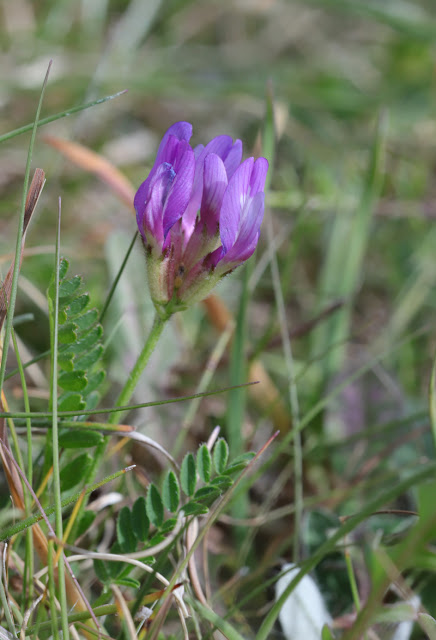 Close by in another meadow were at least a hundred Purple Milk Vetch, one of the species very much on my wish to see list.

Photographs on line and in books tend to give the impression that this is a relatively large plant, but it certainly isn't.

Most were less then 3" tall and hidden amongst the dead grasses. 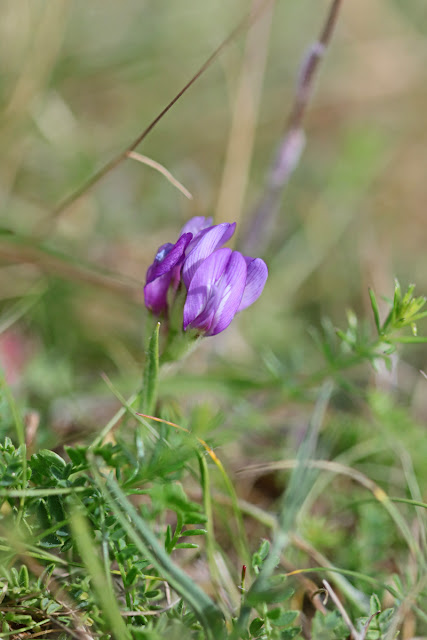 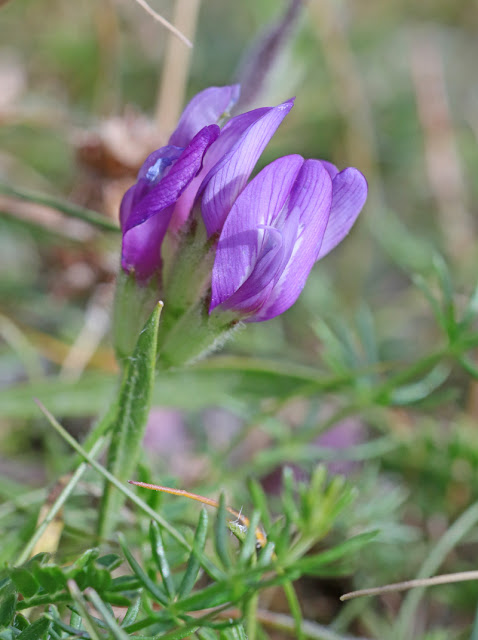 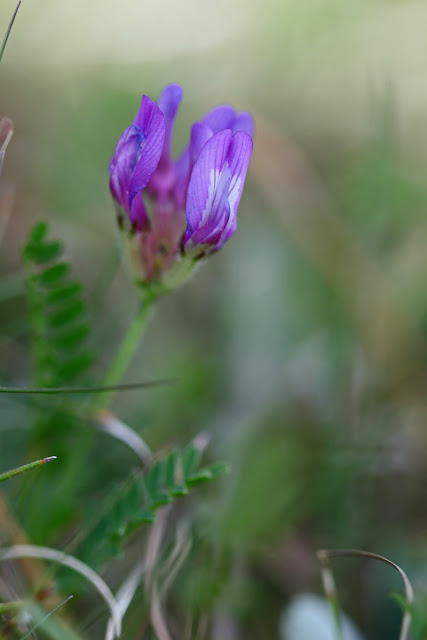 To spot them, look for small specks of purple in the grasses and eventually you get your eye in and see them easily. 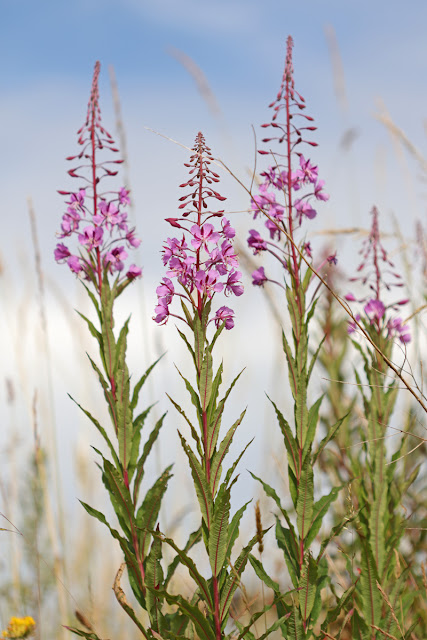 Rosebay Willowherbs look great against a skyline, right in the car park.

There were supposed to have been another target plant here, the Proliferous Pink, but unfortunately they had all been burned off by the relentless sun and high temperatures of the 2018 drought.

There were some very weak and spindly Pyramidal Orchids that I didn't photograph at all due to their poor condition. 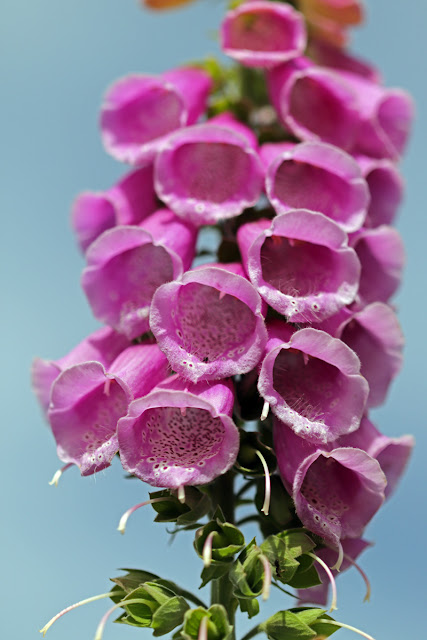 Here's another car park plant that had deep roots and thus able to prosper in the heat, the Foxglove.

Again, getting under the plant to only have the sky behind it removed the clutter of vegetation from the composition. It forces the eye to focus on the detail of the Foxglove and not on its surroundings. 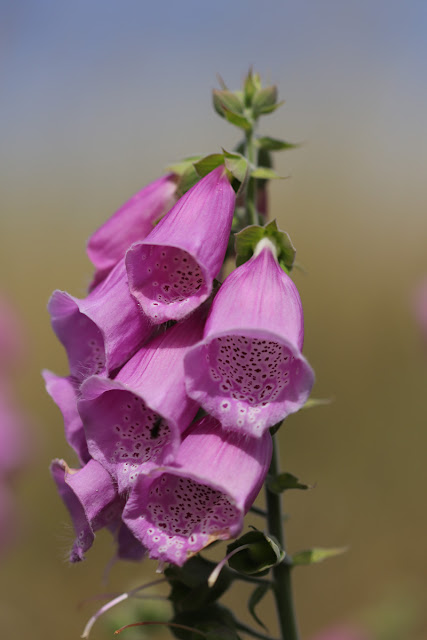 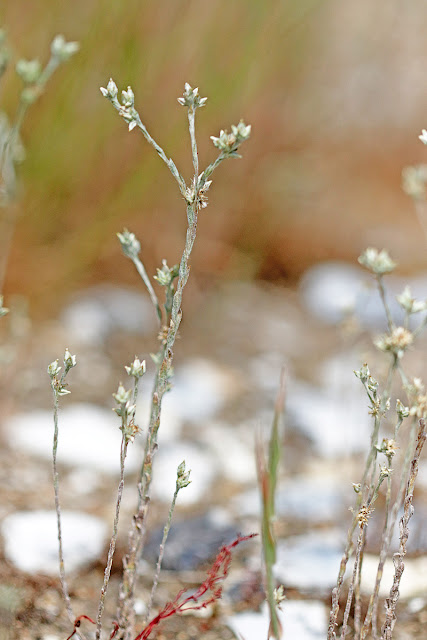 Onto another venue, this time near Santon Downham where the heat had burned off the Annual and Perennial Knawels and the expected Tower Cress was nowhere to be found.


However, we did find these rare plants, the Small Cudweed. Only a few inches tall and some as thin as a matchstick, they were difficult to photograph. 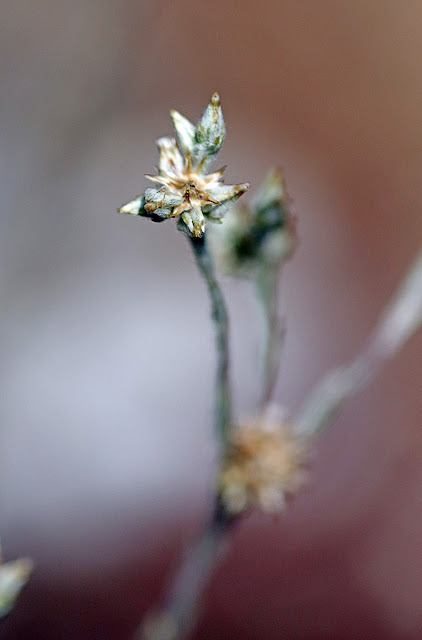 Not much of a photo but the best I could do in the hot breeze.


It wasn't a case of looking intently trying to find these tiny plants. There were so many (thousands) that you couldn't fail to notice them. They grow in and around the dry and dusty areas of paths and other worn areas. 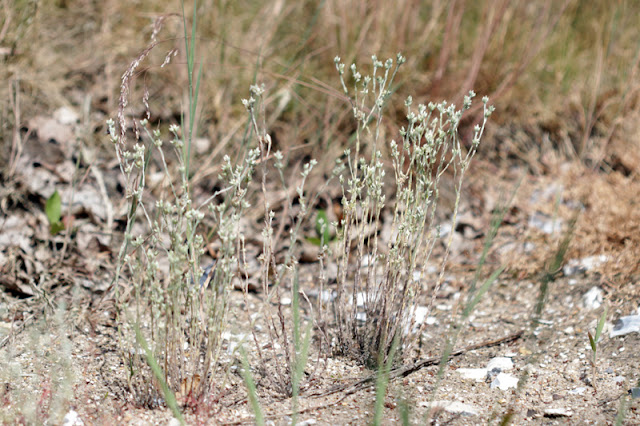 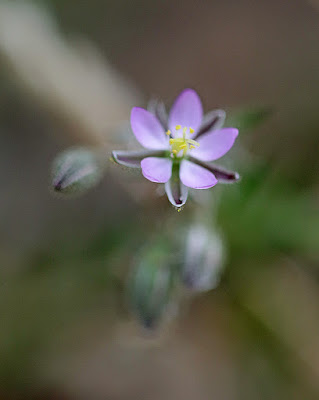 The last flower I photographed was the Sand Spurrey - Spergularia rubra, just a few left  with the rest all shrivelled up in the sun.


So ended another fantastic trip to Breckland.
I didn't see everything I had hoped for, but that will draw me back next year when hopefully weather conditions will be less adverse. I hope you enjoyed the photos and proof that there are wonders to be found North of the River Thames!


Once again, many thanks to Karen Woolley @Wildwingsand and Brian Laney @BrianLaney2 from Twitter for their help with venues.