The Isle of Grain is a peculiar place in that much of it is industrial with huge energy and shipping complexes and vast areas fenced off with no public access. Another chunk is restricted as it's a MOD range. However, there are still hamlets, country lanes, saltmarshes and old grazing land with brackish dykes that make it an interesting place to visit for botany. It's also pretty good in winter for bird watching as well.

The bridge in the distance is the relatively new crossing from the mainland to the Isle of Sheppey, miles away by road, but less than 5 miles in a straight line. 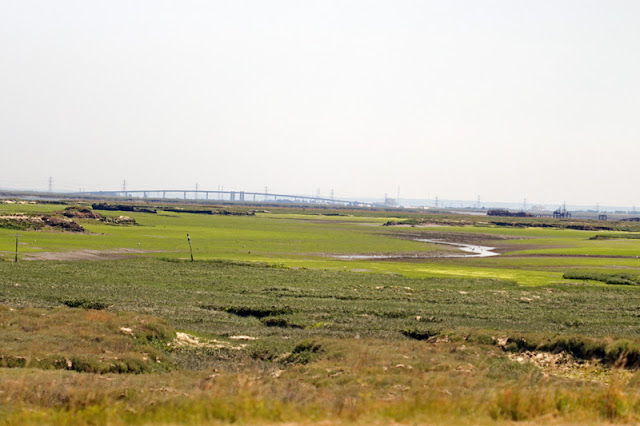 In one area were hundreds of Lesser Centaury, an uncommon plant in the county which doesn't tolerate competition, thus it's found in very poor soils. In this case, very thin soil over an old industrial concreted area. 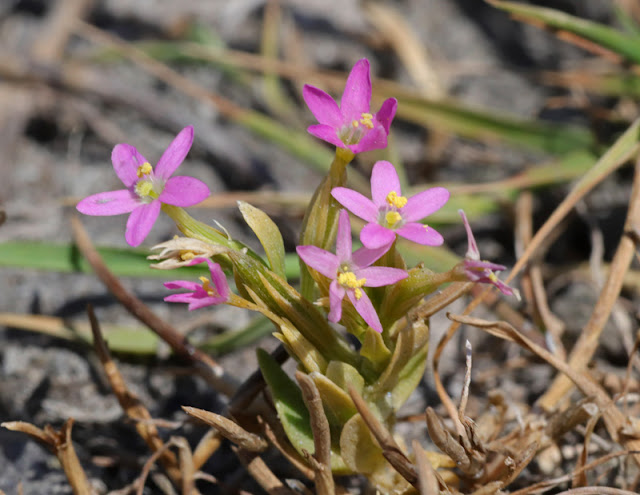 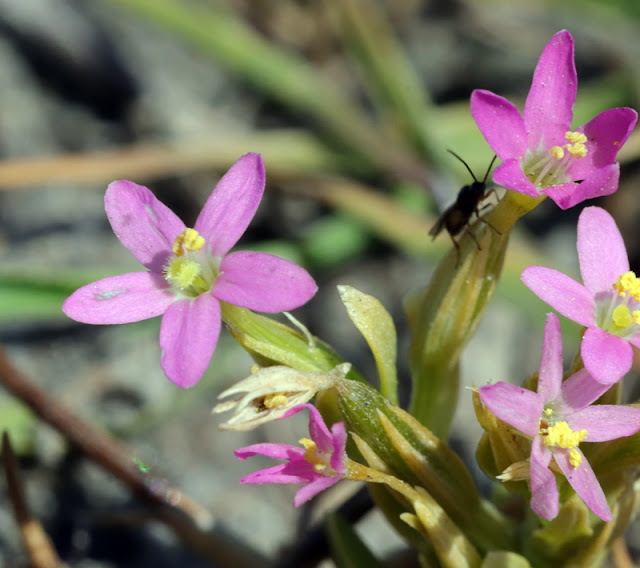 Wild Fennel is common in North Kent and there was plenty here. It's very obvious along the verges of the A2 and M2 and other main roads as well as near the Thames. 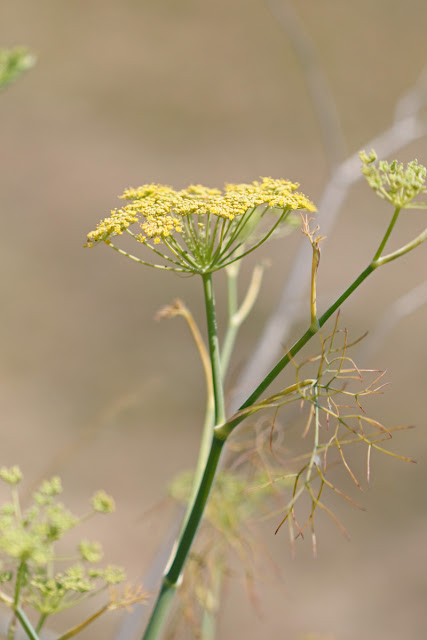 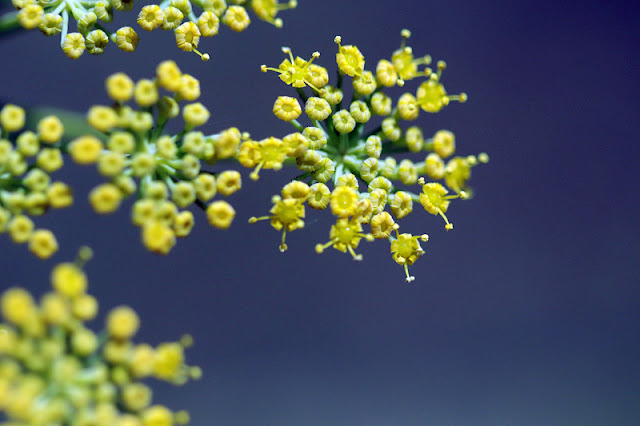 In freshwater ditches I found Fool's Watercress, only superficially similar to the real Watercress in that it grows in the same places and has white umbel type flowers. 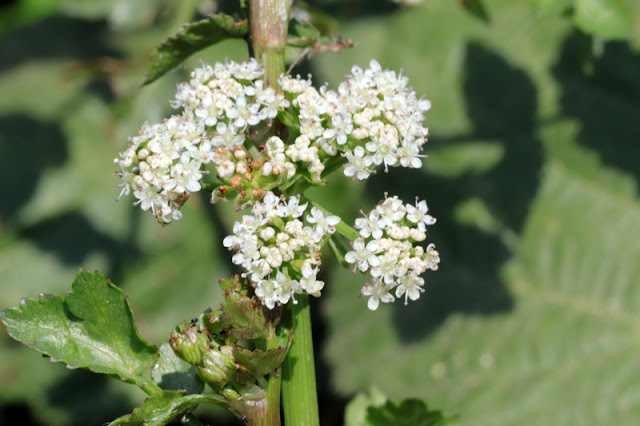 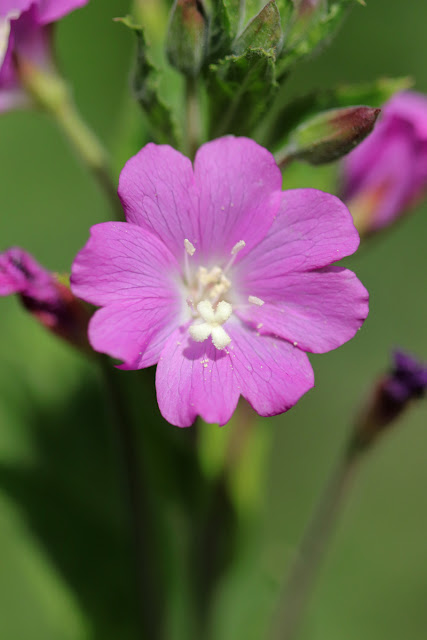 Probably the most obvious wildflower of July is Great Willowherb. It's pretty much everywhere, often quite tall with big showy pink flowers.


This was a nice sight. Hundreds of Goat's Rue in flower, interspersed with Ragwort. I often wonder how Goat's Rue gets about as it is very common in some parts of North Kent and missing elsewhere. It's obvioulsy sown in places like Bluewater, but in places like here in a remote and uninhabitated area by saltmarsh, that seems unlikely. 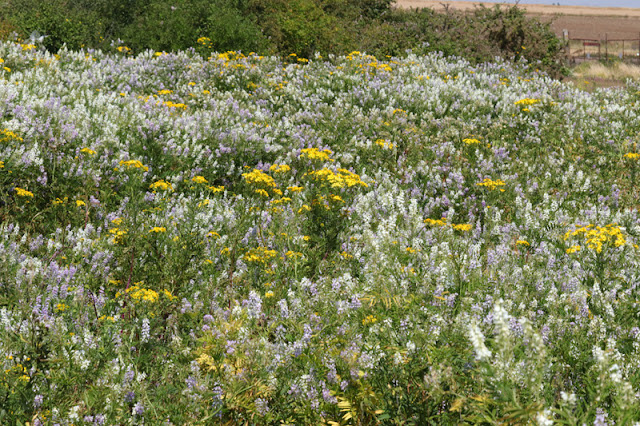 Common Fleabane is another dazzling yellow flower of Summer, albeit on an untidy hairy plant, it is beloved by many butterflies, bees and hoverflies. It's name of Fleabane is obviously completely correct as I've yet to see any fleas on it............ever! However, it doesn't dter spiders. You might just make out a pale crab spider on the right hand flower waiting to pounce! 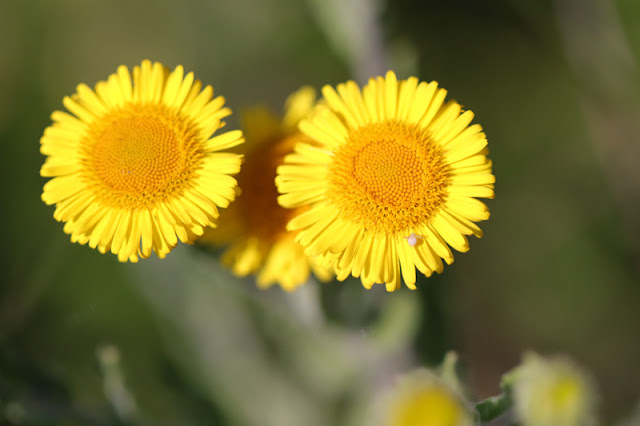 Oddly, this next plant was my star find of the trip and wasn't even in flower. It's a Rare Plant Register species in Kent and although it had previously been found nearby, this was a new record for the monad I was in. Not only that, it was the first time I'd ever seen this species. 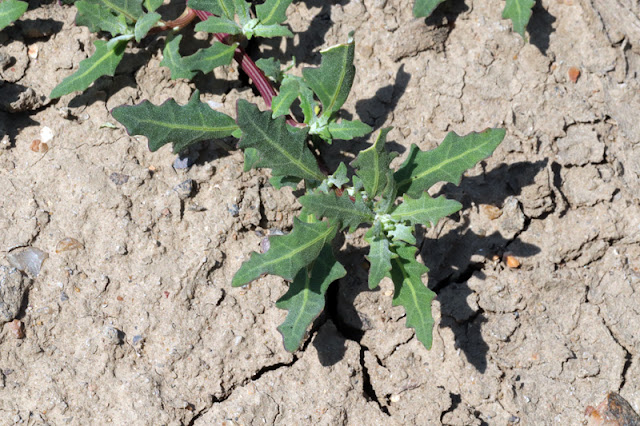 I'm surprised anything much could grow as at this time it was in the midst of a drought; you can see the dry parched dirt in the photos. However, I suspect the farmer watered his crop of Broad Beans that this plant was on the edge of and enough ran off to keep this plant (and others) going.
It is Oak-Leaved Goosefoot. 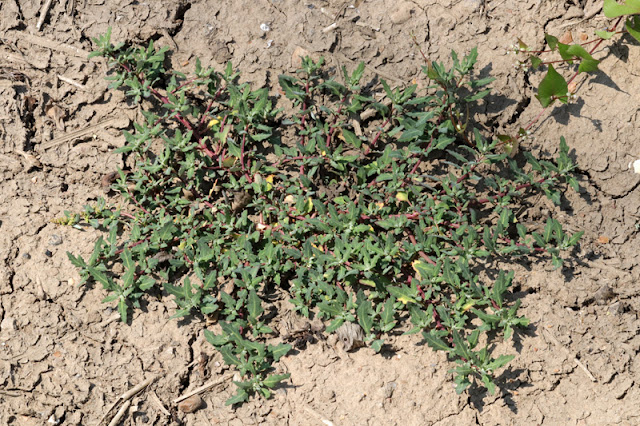 I then went onto the saltmarsh and found the usual plants there, many are RPR species due to saltmarshes disappearing from the county as sea levels rise; new sea walls and coastal defences are built, or the land gets developed.  Having said that, the next species is now appearing all over the country along salted roads, so there's no danger of it becoming rare. It's the Lesser Sea-Spurrey.
I don't know why this plant has managed to colonise salted road verges but Greater Sea-Spurrey hasn't, perhaps the latter species needs a high salt concentration in the soil all year round? 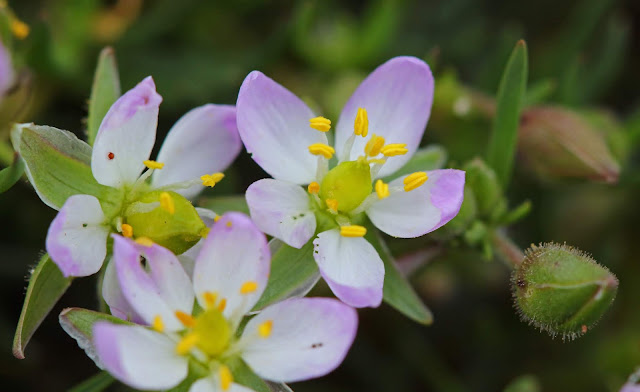 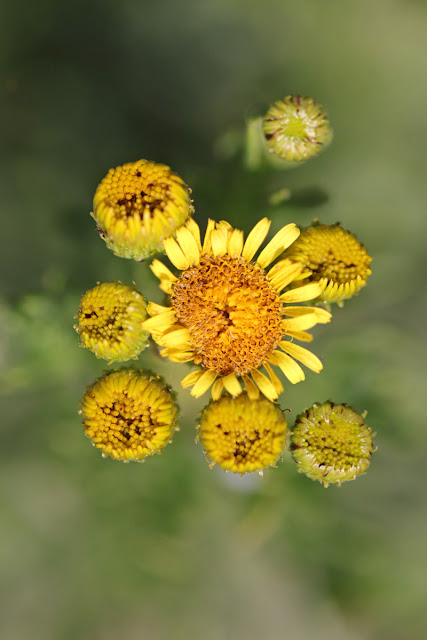 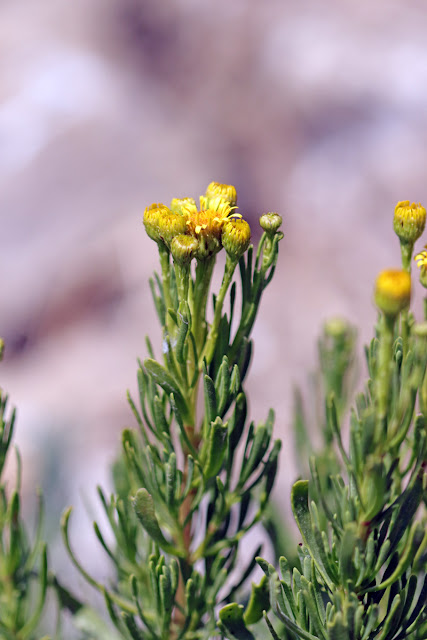 Golden Samphire has beautiful golden flowers, but the plant always looks scruffy, due to its fleshy leaves. It is often half covered in detrius as well as in many places it is covered by high tides several times a month. 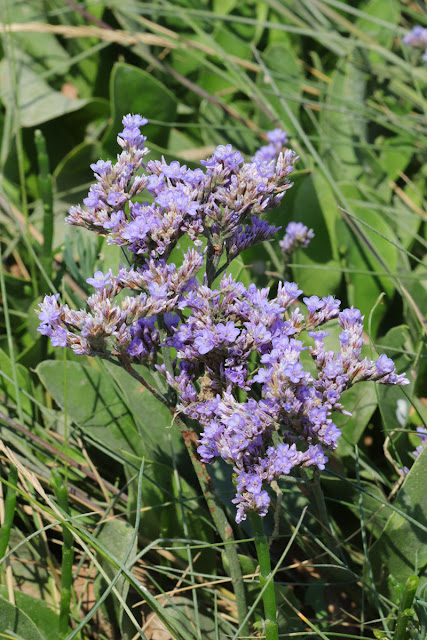 The North Kent salt marshes are full of Common Sea-Lavender, all in flower at this time of the year. It can be quite a sight to see. This is another species that survives inundation by saltwater on a regular basis.

The last plant I photographed was Sand Spurrey. I'd missed it on the way out and noticed it by the car on my return. The leaves are not flashy and the whole plant is smaller than Lesser Sea-Spurrey, though the similarities are obvious. It does not tolerate any salt! 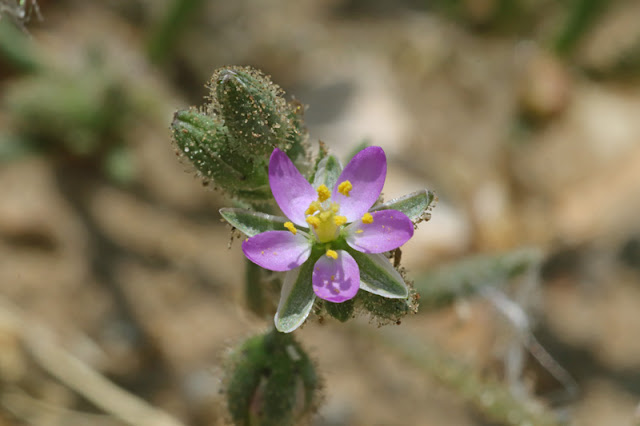