- April 17, 2019
I was still suffering ill health at this time and could not walk far from the car.  As churchyards are often great places for wildflowers I thought I would visit a local one and see what Spring flowers might be up there.


Perhaps one of the commonest Spring flowers seen is the humble Lesser Celandine, and there were fine displays of them here as well with each flower reflecting the sun's golden rays back to any person caring to admire them. On cloudy or wet days they stay firmly closed as Wordsworth noticed!

Wordsworth wrote a poem about this plant. Here's a paragraph from it, though you can view the entire poem by searching for it on the internet, it's quite long!

"There is a Flower, the Lesser Celandine,
That shrinks, like many more, from cold and rain;
And, the first moment that the sun may shine,
Bright as the sun himself, ’tis out again!". 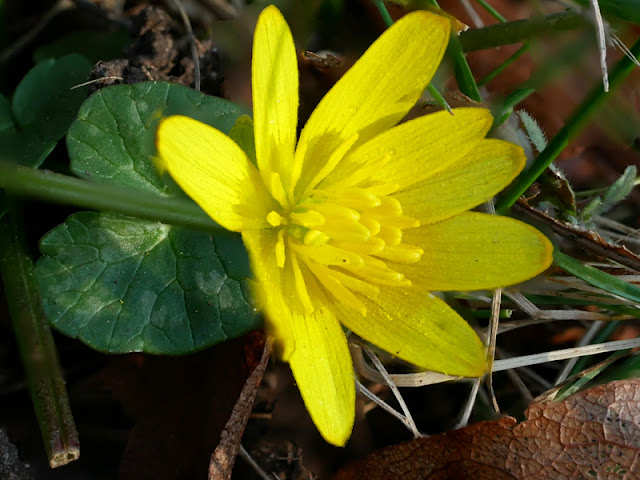 Another common Spring wildflower is the Red Dead-Nettle. While they are small flowers, they are favoured by the early Spring butterflies who readily use them to recharge their energy levels after a Winter hibernation. It's leaves were also used historically to staunch bleeding - though I note there is never any evidence recorded as to whether this worked or not, just that people used it in this way! 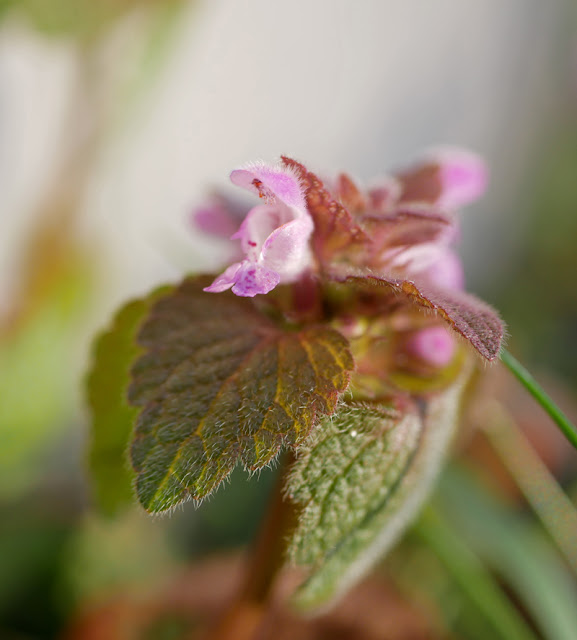 Anecdotes suggest that if boiled and strained, the juice was good for clearing up eye infections. Others suggest it grew only where witches had urinated! If true, I would suggest that there are not only enormous amounts of witches flying about, but that they are all incontinent too... Depending on the area you come from this plant was either used by witches to bring harm to you and your kin, or was used as a defence against witchcraft - take your pick! 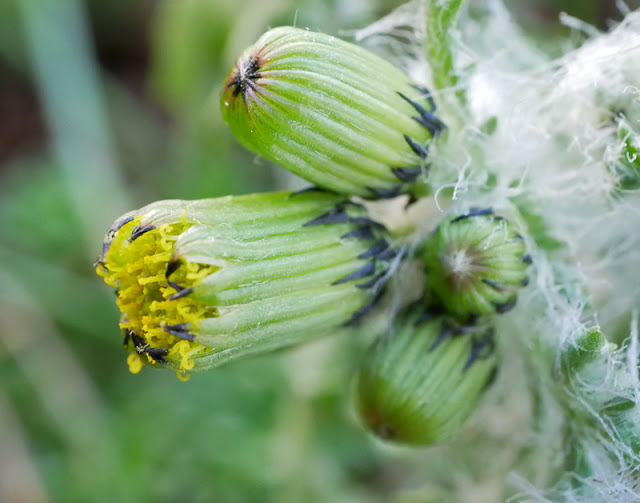 Most churchyards in Kent have a planted but ancient yew tree and this one was no different. The bark had lovely pink and green pastel hues and a texture guaranteed to stir interest in anyone caring to notice. 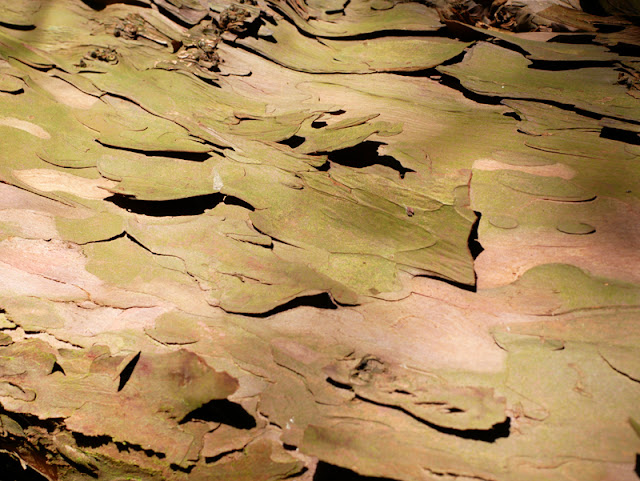 The tiny pollen cones on the underside of the leaf branches were close to opening. Once they do open, a slight shake of the tree branch sees a yellow cloud of pollen escaping into the air, no doubt causing misery to hay fever sufferers. Tree pollen gets going from March onwards, followed later by pollen from wildflowers and grasses.

Yew wood was historically used for making longbows, but its sap was also poisonous and arrows were often tipped with it as well. 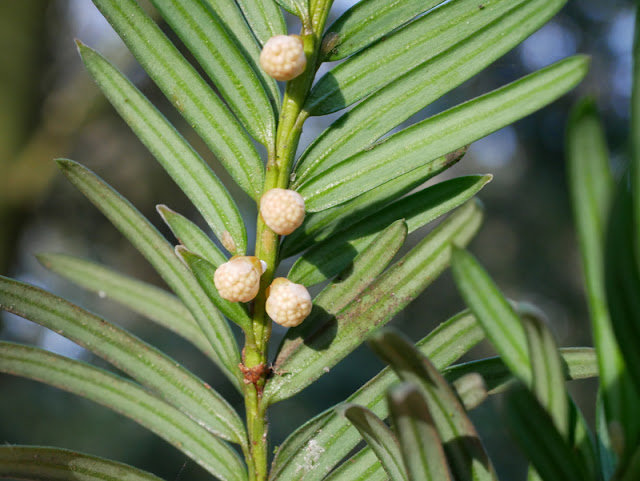 Blue coloured Anemones are usually planted. There were some planted here by one particular old grave.  However, over time they had spread throughout a large area and were growing in places they would not have been planted in. I have also seen these escape from gardens into adjacent woodland in other areas, so they may become a feature of urban woodlands in time to come. 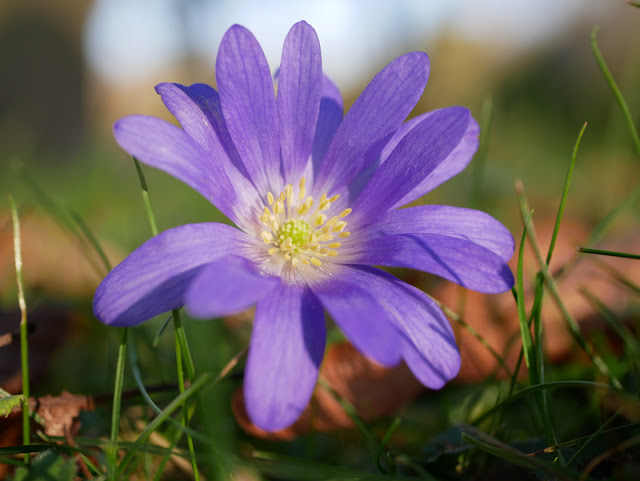 There are two types of blue anemone found as escapees, this one and Anemone appennina. The main difference between them is shown below, but the most easy to tell feature is whether the underside of the petals are hairy or not. Don't forget to check them when you find some! Both species may be found in a white form as well which may look like an odd looking native Anemone nemorosa. 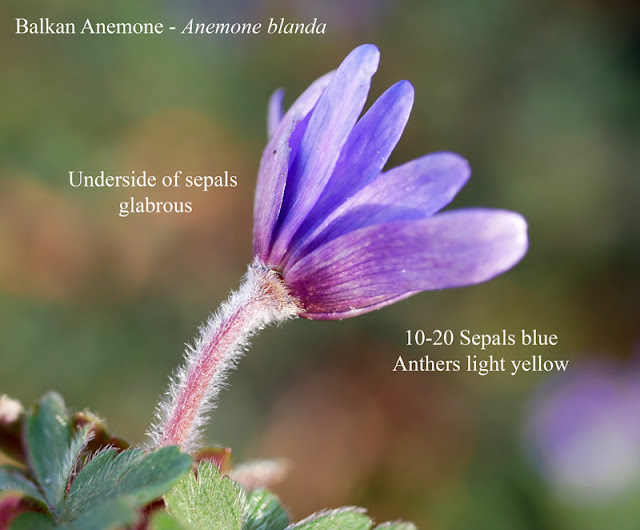 There were patches of naturalised Winter Aconites scattered here and there as well. However, these plants have a tendency to become scruffy at the slightest bit of rain or frost and most were almost gone over. You need to visit them often to find some at their best.

This is a highly poisonous plant which if ingested can be fatal by causing a heart attack, but before that happened one would experience many highly unpleasant effects of poisoning, such as vomitting and diarrhoea. It amuses me when the press make a big "hoo-hah" over a poisonous wildflower such as corncockle being in wildflower seed mixes when people actively grow Winter Aconites in their gardens. Perhaps all street facing gardens should have a warning sign up regarding the potential for death if you eat the flowers?  Other plants such as some Hogweeds can cause chemical burns and awful reactions to being exposed to sunlight just by picking the plant and getting its sap on your skin.

Thus the obvious and safe thing do to is not to eat or pick any wild plant that you do not know the identity of (including fungi).

Old graves such as these shown below are often a haven for wildflowers, in particular smaller species such as Stonecrops (Sedum) and Speedwells (Veronica). In this case unfortunately they had recently been mowed.
I haven't seen these sarcophogous types of graves outside of Kent, though I am sure their use must have been widespread when they were fashionable. 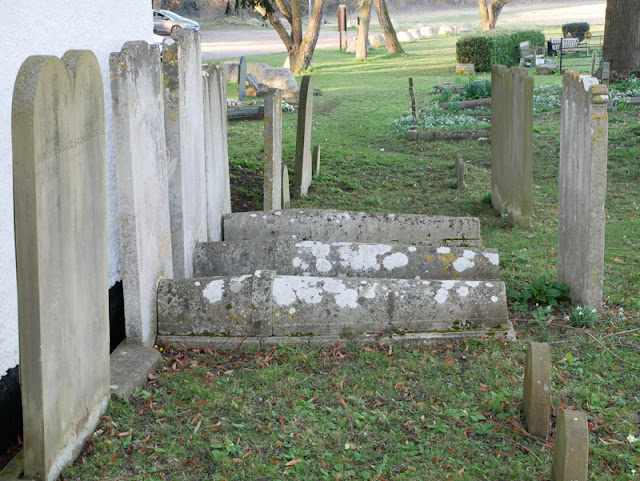 Several types of Primroses were present, all originally planted no doubt, but all having escaped and seeded into grassland nearby. Here's a beautiful pink and yellow form of Primula escapee. 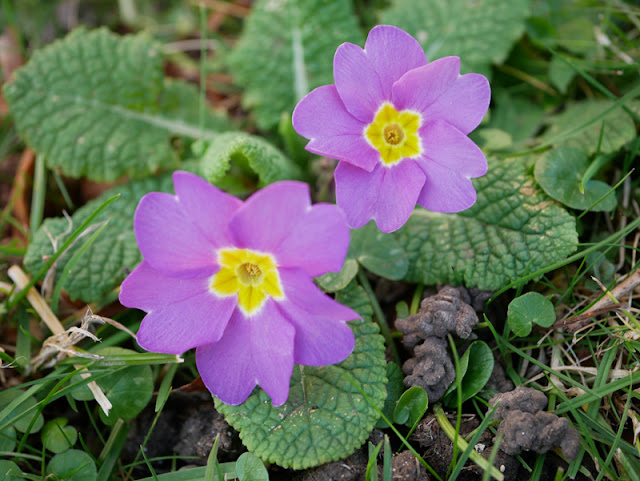 And a white one with a yellow centre, more like the native form which were also frequent here. 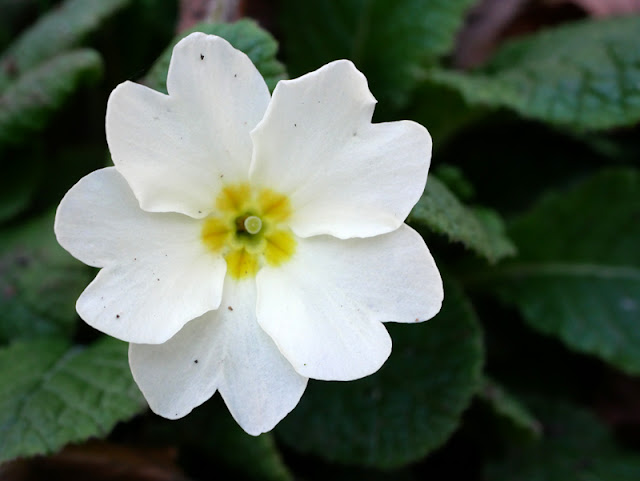 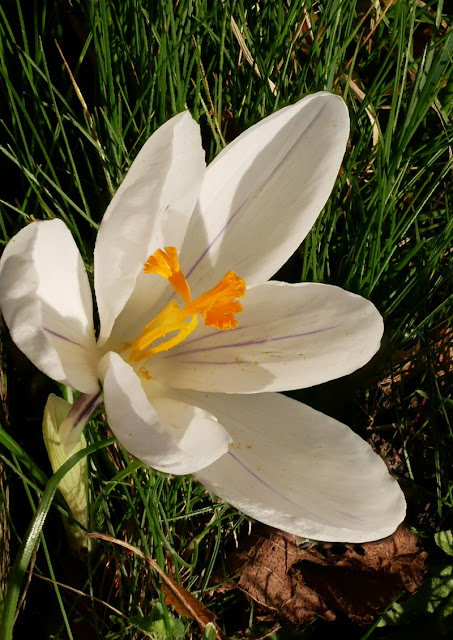 Planted Crocuses abounded but I couldn't determine if they were all planted or whether any had grown on their own. As such, I don't record them, or if I did there would be a note to add that I believed they were planted.

They came in a variety of colours and looked great though!

My final featured wildflower from the churchyard was the ephemeral Ivy-leaved Speedwell. This comes up out of nowhere, and is found almost everywhere one looks from now until around the beginning of May when it completely disappears until next year. Given this, I try to record as much of it as I see to accurately record its distribution. 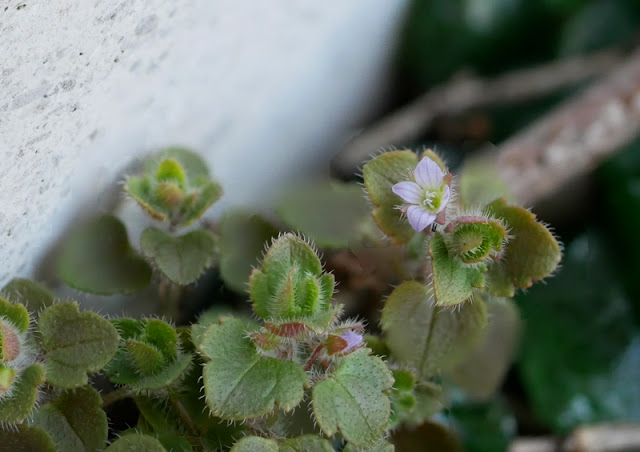 Although the photograph doesn't show it due to a quality macro lens being used, the flowers are only about 2mm across, they are tiny! It's easier to spot the hairy ivy shaped leaves than the flowers, which to me appear as little pinkish dots on the ground!

There are actually two recognised sub species of this plant which are subsecies leucorum and subspecies hederifolia, the latter having intensely bright blue anthers.  Invariably I find that those growing in shaded areas are subspecies leucorum and those in the open to be subspecies hederifolia, but I always check. There are other morphological differences in leaf shape, but I'll leave you to research that yourself. It's detailed in Harrap's Wildflower book with photos very well. 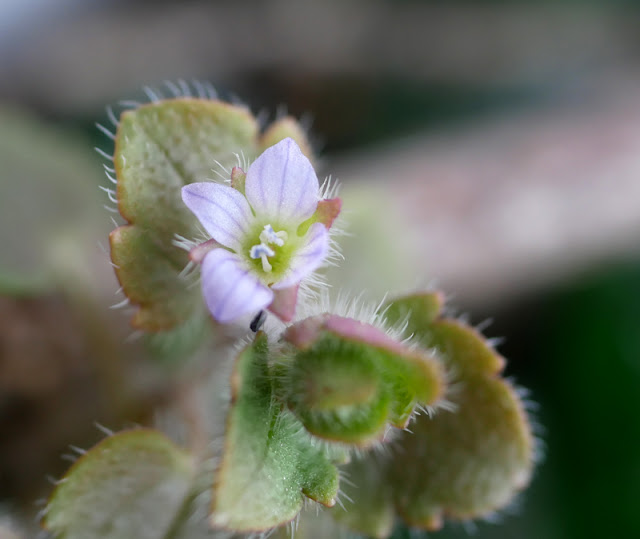 That was it for the churchyard, but on the way home I stopped off at a tiny wood just to see if there was anything else I could find near the car.  I did find some nice and still flowering Spurge Laurel (which incidentally are evergreen and can be spotted throughout the year) and some nice views over the valley. 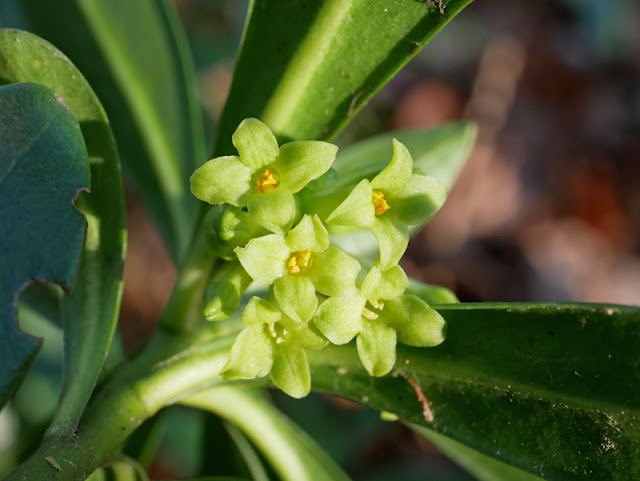 I must admit to taking plants like this for granted as I see them all the time where I live. However, they are only very common in old deciduous woodland on the chalk. Once you leave the North Downs chalk areas, they are much scarcer in most of Kent.  For a national distribution of this plant see: https://bsbi.org/maps?taxonid=2cd4p9h.bte
You can use this resource for any species of wild plant to see where it has been found. 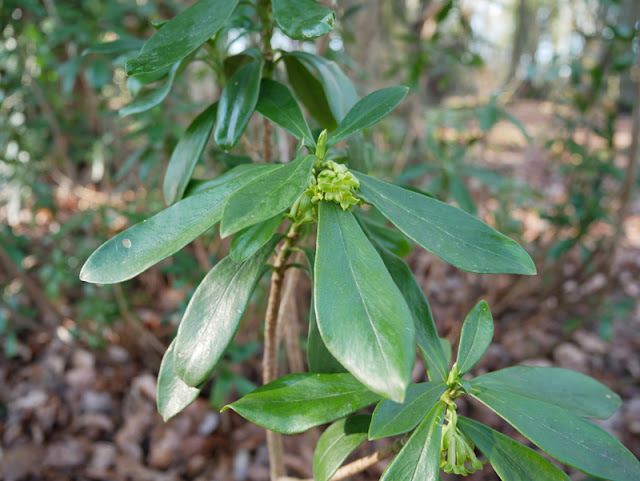 Some fine views below of the Fawkham Valley, a dry chalk valley, just a few miles out of suburban London. 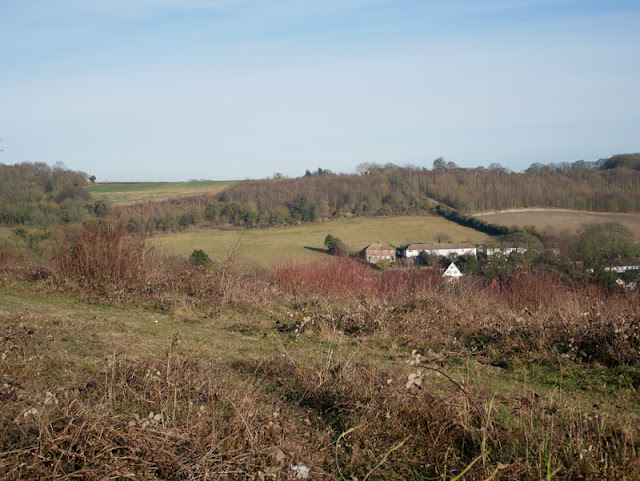 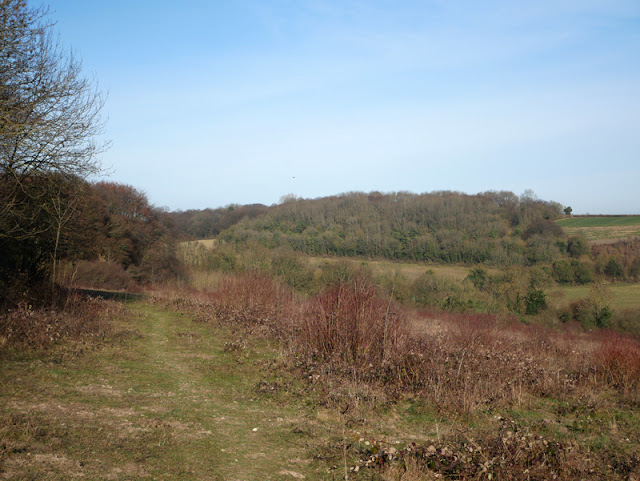 Well, I hope this goes to show that one doesn't necessarily need to be fit and healthy to see and appreciate wildflowers. Much can be found within yards of a car park and I hope you enjoyed the blog and that it inspires you to look around your own area.

And as I write this in mid April, the Spring flowers are beginning to emerge in numbers and the sight of carpets of Bluebells dotted with Early Purple Orchids, Yellow Archangels and Wood Anemones is not far off now at all.