- April 21, 2019
This walk was exactly a week after I had a serious heart operation. Following it, I had been feeling very rough with the sensation that someone with big boots had stamped repeatedly on my chest! Having said that, this day was the first where I felt good. My heart rythm was normal, I had rosy cheeks and the weather was warm and springlike, I must now be better. Provided I took things easy I thought it would be nice to visit my local woods to see the springtime flowers.

These woods were on a steep hillside, but I took it easy and photographed some flowers along the way. It felt vry good to be out and about again.

Below are some naturalised garden Grape Hyacinths surrounded by Lesser Celandines. 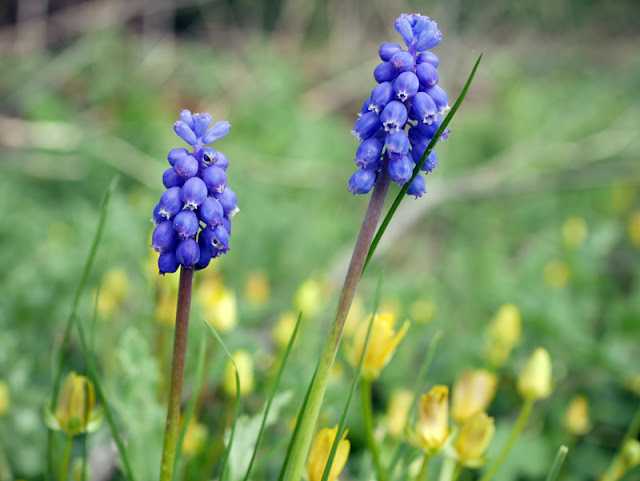 Another common garden escape is Green Alkanet, with its bright blue flowers that I found by a road verge on the way to the woods. 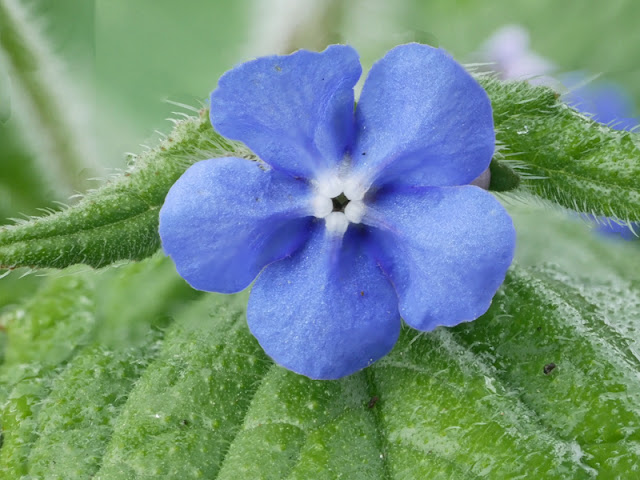 In my last blog, the Cherry Plum was in flower. Now however, those were fading and the main tree in bloom was Blackthorn both of which can look similar. 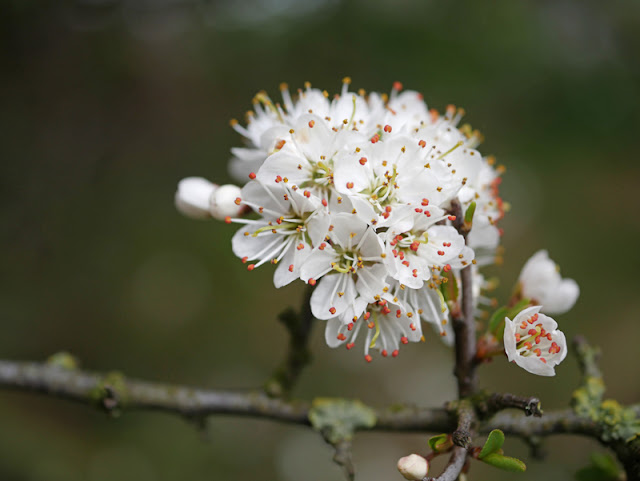 By a road was this Glory of the Snow, a Scilla species likely arrived into the wild from fly tipped material years ago. 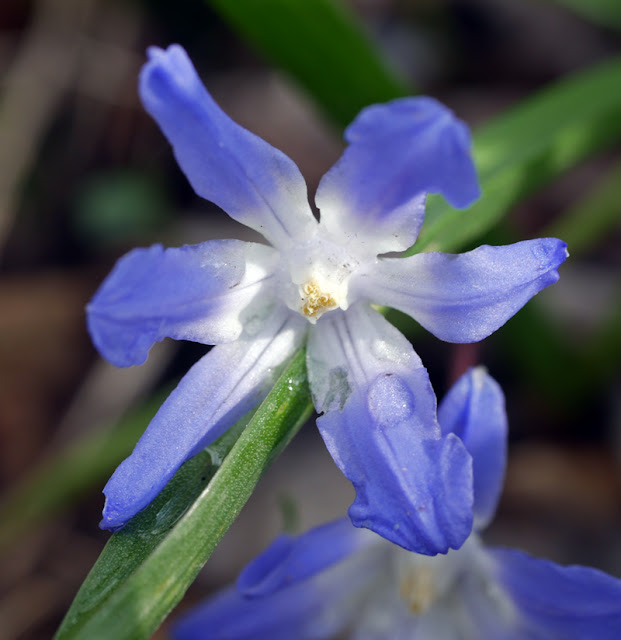 In the wood were carpets of Wood Anemones. always a delight to see and I'm glad I didn't miss them this year after all. 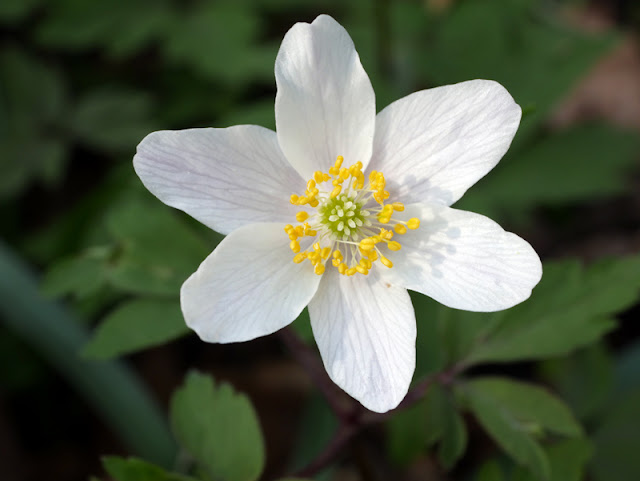 The contrasting pale but bright green flowers of Wood Spurge, against their dark green and purplish lower leaves was striking. There are lots of non native Euphorbias in people's gardens, yet this is a most attractive native species overlooked by most gardeners. There is one that looks similar called E. aygdaloides subspecies robbiae which differs from the wild form in having a very bushy section of lower leaves. 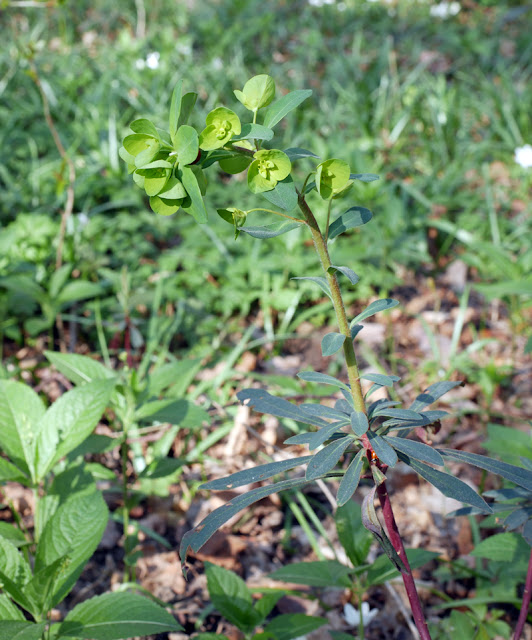 Even the tiny Ground Ivy had come into flower whilst I had been ill. Carpets of them in shades of pink lined the woodland edge. 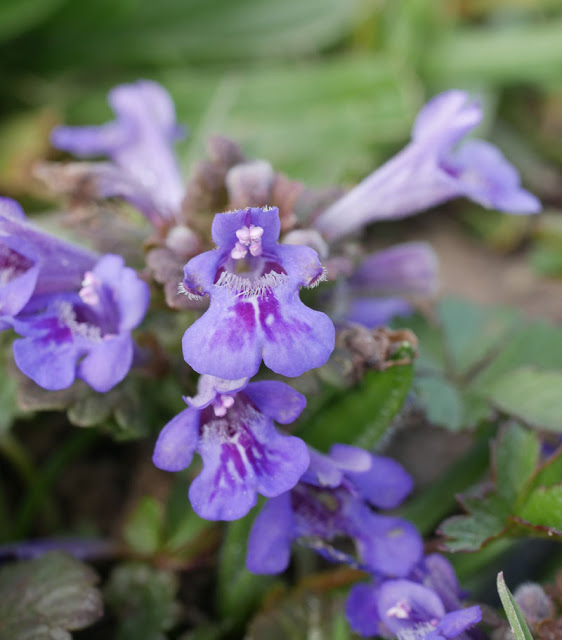 It was quite warm and I was sweating from the exertion of climbing a hill and getting down low to take photographs. I still felt OK overall and decided to carry on. There were Early Purple Orchids in this wood and it would be great to see if they were in flower now. In hindsight this was a very bad decision. 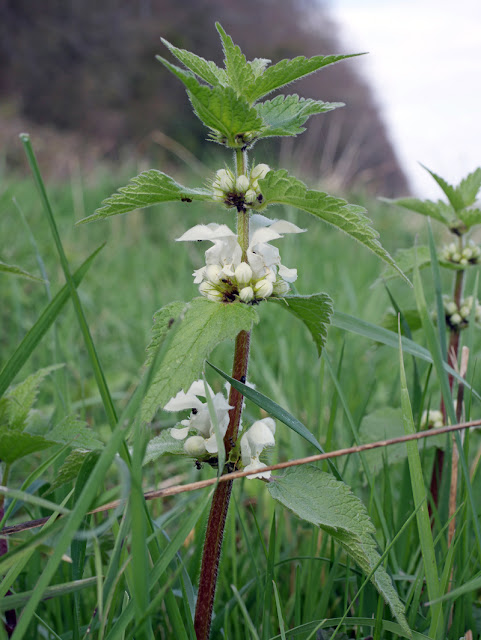 There were plenty of Red Dead Nettles and this White Dead Nettle,  a great food source for early butterflies and bees.

Wood Forget-me-not was flowering, though this coloured form was probably a garden escape. There were plenty of native forms to be found as well in the woods here. 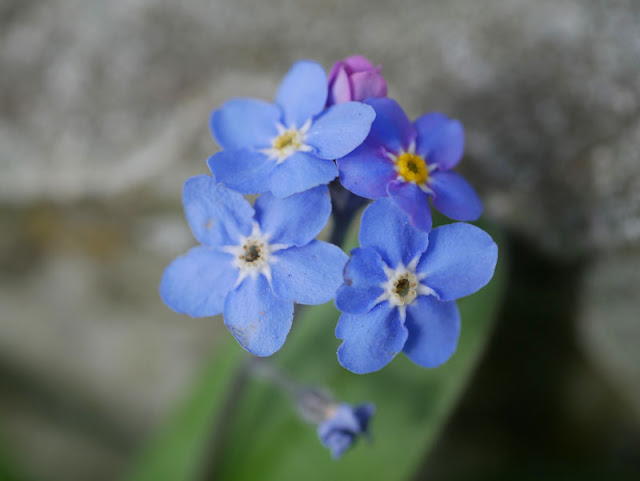 There were large patches of Sweet Violet in both white and the more usual purple colours along the woodland paths. 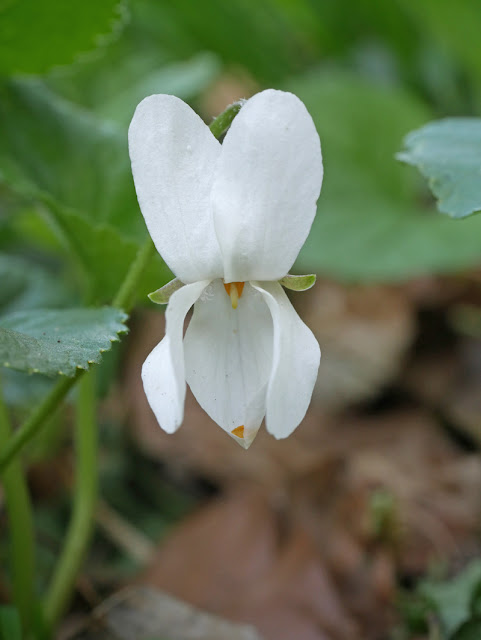 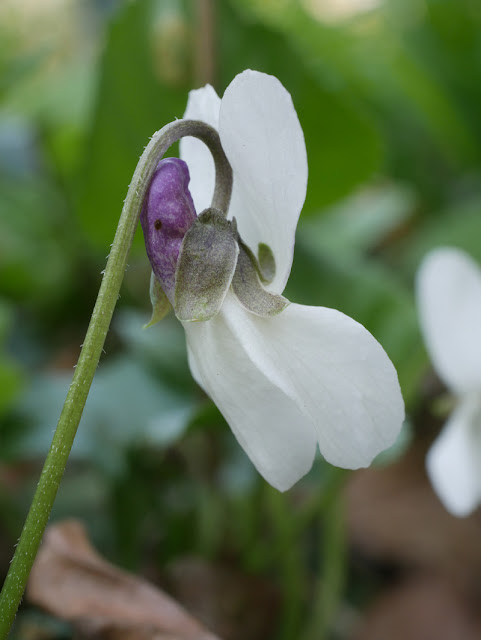 Also present in large numbers were the Wood or Early Dog Violets. 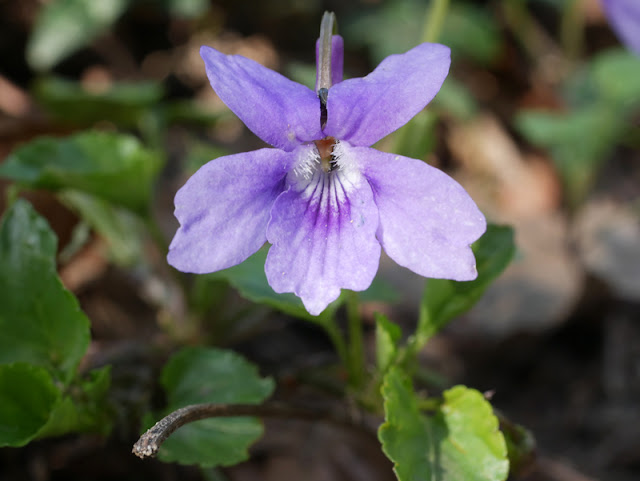 By now I knew something was wrong as I was getting bad chest pains and becoming short of breath. My partner was with me but I kept quiet as I didn't want this wonderful spring flower trip to end. I got by, by walking slowly and not getting down low to take photographs. We failed to find any flowering Early Purpe Orchids and we began to make our way back to the car.

We then walked by a patch of flowering Moschatel (also called Town Hall Clock). I couldn't resist a final photo, but had trouble focussing the camera on such a tiny plant in deep shade. As such, I was down for longer than I realised. 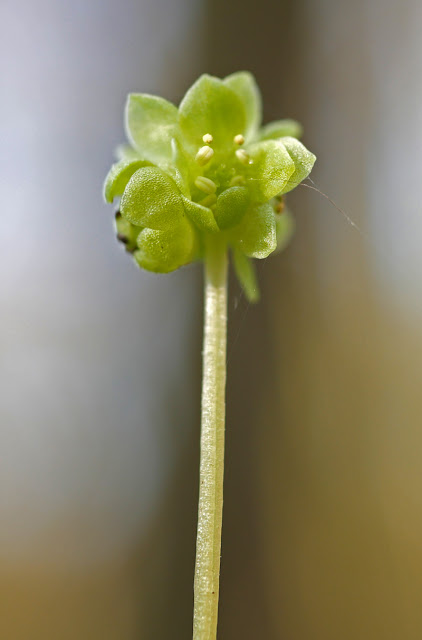 It was a nice photo but it wasn't worth what followed. I had crushing chest pains and I felt like I'd been hit with a sledgehammer in the chest. We managed to get back to the car and home and from there went to A&E as I thought perhaps I had triggered a heart attack. Thankfully, after hours of tests this was not the case. I had relapsed into fast atrial fibrillation and seruously aggravated an already bruised heart (from the operation a week earlier). A 15 minute injection of Flecanide eventually calmed my system down and my heart returned to a normal rythm once more. I was discharged shortly before midnight!

I've mentioned this to show that one really must take it easy after any serious operation. As the effects of the operation in my chest could not be seen, once I felt ok I thought I was better. I was not. Several weeks later I'm still botanising but very much taking it easy and keeping trips short and without exertion. To date I'm now feeling fine and hope to be fully fit within a few weeks (mid April at time of writing). 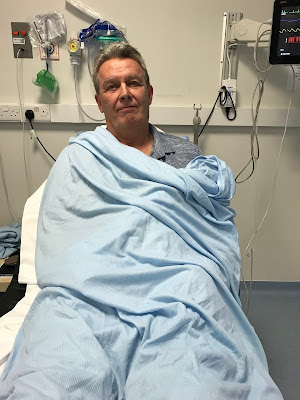 Since then, I've found many amazing plants and flowers within yards of the car without trekking up steep hills or stressing my system. It keeps me with some semblance of mental and physical fitness without taking risks. Until next time.