- July 18, 2019
It's odd how sometimes, somewhere quite local to you can throw up a surprise, and in this blog I am writing about one right here. Here's a taster photo, the details of the find follow further down this blog. 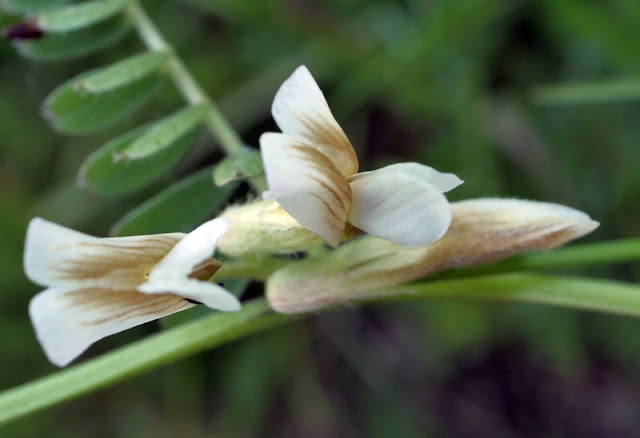 I had noticed there weren't many records for TQ5572 and decided to spend an hour or so adding some to the BSBI database. I found a host of previously unrecorded species common on the chalk such as this Grey Sedge. 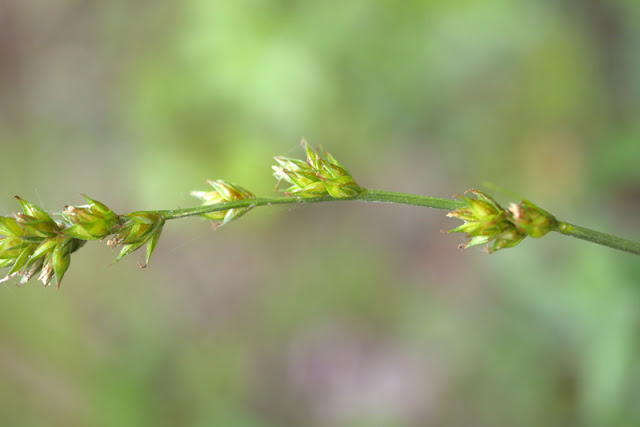 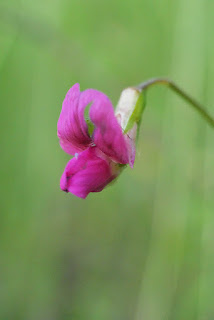 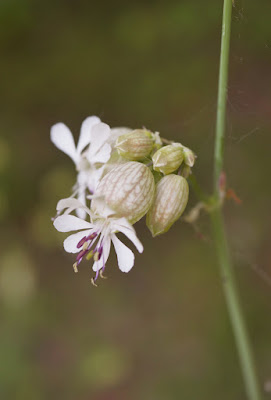 But then I came across a plant that was somewhat puzzling - a mystery plant!

There was a substantial colony of what looked like the white form of Vicia sativa (subspecies sativa) or Common Vetch  on both verges of the B260 for a hunded metres or so east of the A282 bridge.There were hundreds of plants in flower, which at first I thought were anthocyanin deficient V. sativa plants. I thought it odd that there would be so many white variants of this plant in quite a large area. 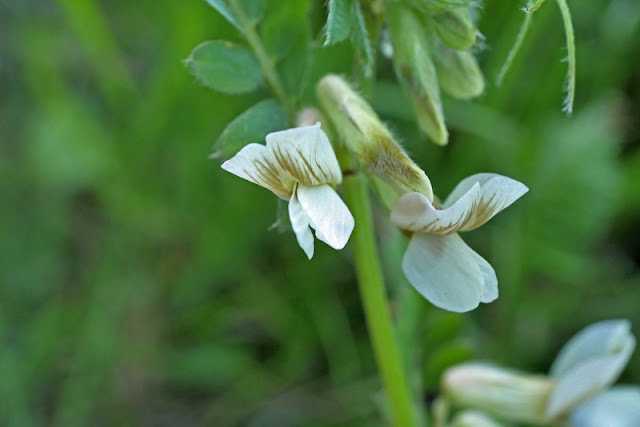 I posted some photos on Twitter of it and a friendly botanist suggested Vicia panonnica - Hungarian Vetch which it subsequently turned out to be, hence the Hungarian connection to the title of this blog. 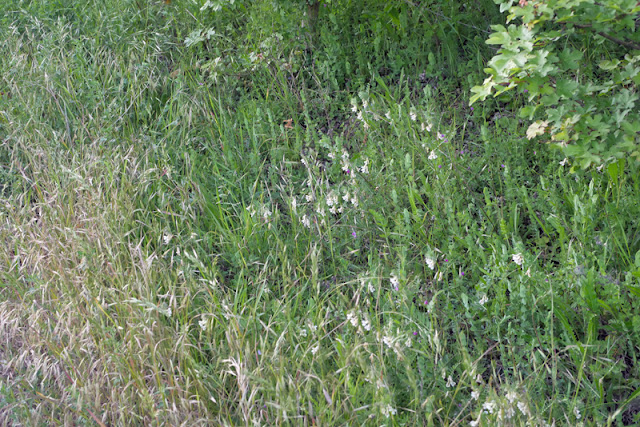 However, this is not a first for VC16 West Kent as described below.

In 1977 V. pannonica (Hungarian Vetch) was found by G. Joyce on a motorway slip road in TQ57L and refound in the 1990s by Eric Philip presumably at the same location. This description would likely be one of the slip roads from the M25/A282 onto the A2 at that time.
It is unlikely that this would be on the B260 (my location) as it crosses high over that road. However, in the late 1980s, the A282 was widened and the bridge carrying the B260 was realigned and lengthened. This required the import of large amounts of earth and sand  to complete the works. The sandy soil can still be seen today around the bridge area even though there is much scrubbing over now. Either side of the bridge area, the soil reverts to thin turf over chalk.
I believe it was during these works that V. panonnica was introduced to the B260 verges. It could have been from amenity sowing when the works were complete or from seeds picked up by machinery working on the motorway below.
Also of note, is that this same area has hundreds, possibly a thousand Lathyrus aphaca (Yellow Vetchling) plants which are absent from the rest of the immediate area. This possibly lends weight to the theory that both plant species arrived by amenity sowing after the roadworks were completed.
V. panonnica has not been found anywhere else in East or West Kent. It resembles a sturdy Vicia sativa Ssp. sativa  but is hairier and mostly has more leaflets as well. Of course the dirty white flowers with brown veins is distinctive in itself. 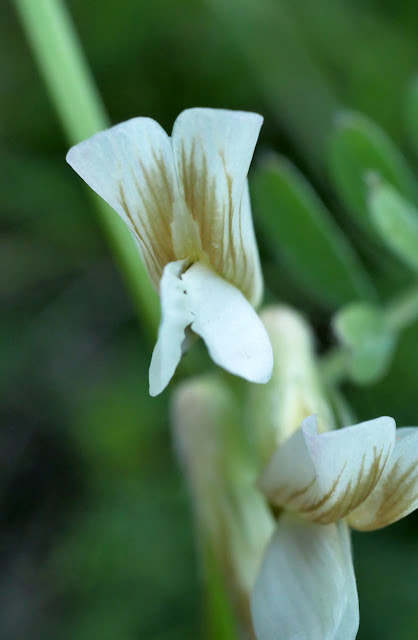 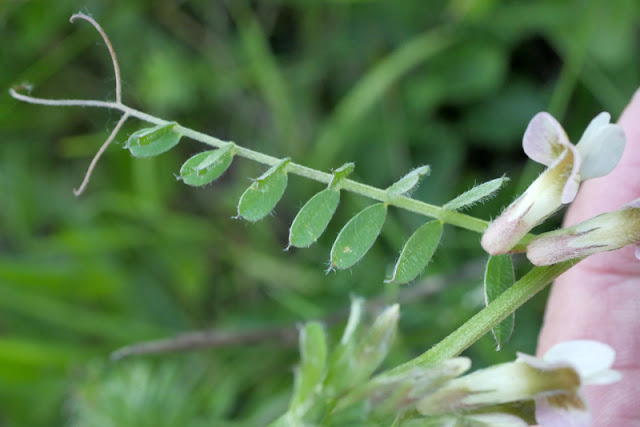 After mentioning Lathyrus aphaca, which itself is a Kent RPR species, I thought it would be informative to show you some photos of it as well. 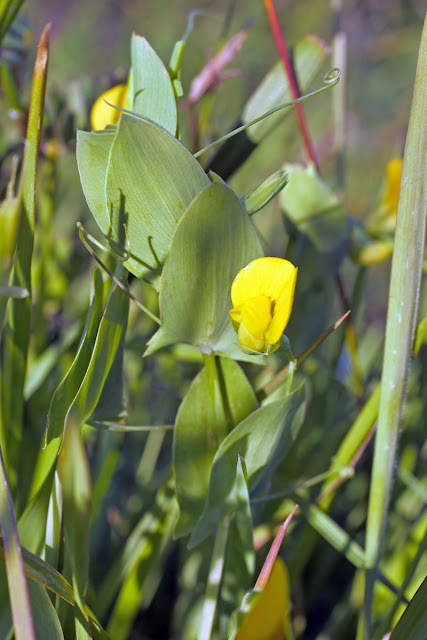 The leaves are actually stipules formed into an arrow head shape.


Beware of mis-identifying Meadow Vetchling which has similar leaves when young but also lots of strap shaped leaves as well. 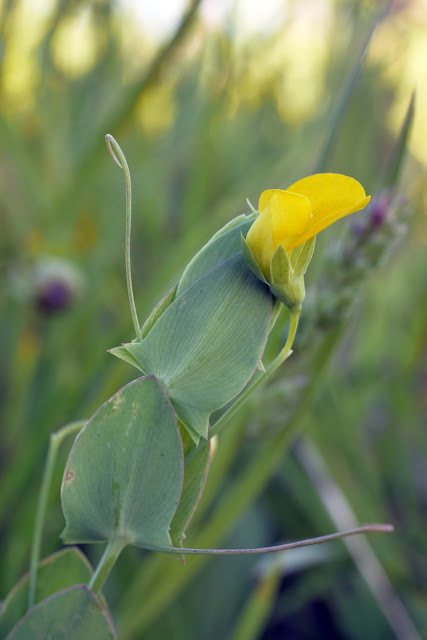 Unlike Meadow Vetchling, this has solitary yellow flowers usually on a long stalk, whereas the former often has a clump of flowers on short stalks. 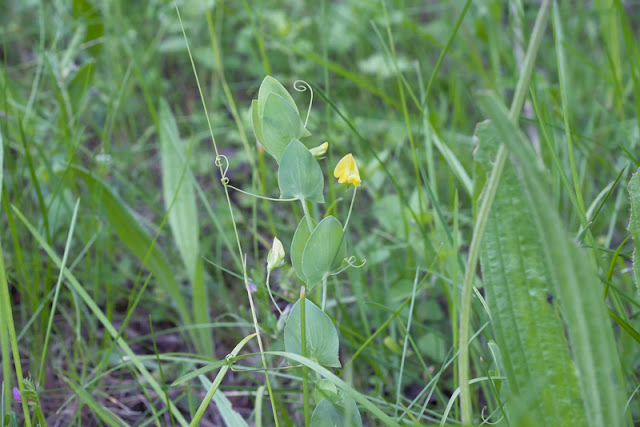 Finally, here is a habitat photo for both Lathyrus aphaca and Vicia pannonica. Both can be found on both sides of the road from the road sign and around the bend.  This is the B260 Trolling Down Hill looking east where the road crosses the A282 (M25). 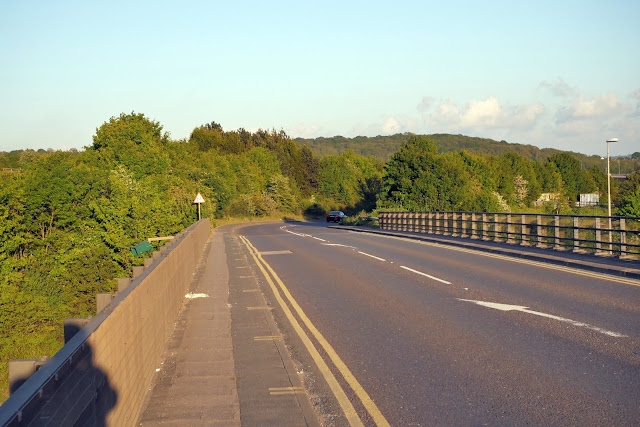 It goes to show that surprises can be found even in your local and well known areas. Get out and find some in your own area!
Take care
Dave
@Barbus59