I don't really choose where to go botanically recording now; gaps in the recording database tell me where needs doing and I select an area to do from that database. Hopefully, most gaps where recording is necessary in Kent will be done by the end of this year when the BSBI 2020 Atlas project comes to an end. This day it was the turn of an area north of Ruckinge and then a short visit to the Romney Marsh just south of Ruckinge to see what I could find and record.

I started off on a circular walk north from Ruckinge, taking in 4 x 1km squares (monads). I often wonder what will be my first photo of the trip and surprisingly for the time of year it was Lesser Celandine!

Unknown to many people, Lesser Celandine has two subspecies in this country; however, they can't definitely be told apart except late in the season when flowering is coming to an end. It is then that subspecies verna forms bulbils in the leaf axils deep within the fronds of leaves and subspecies fertilis doesn't - simple!

Here's a photo of one of those bulbils followed by a photo of its weak, small flowers. 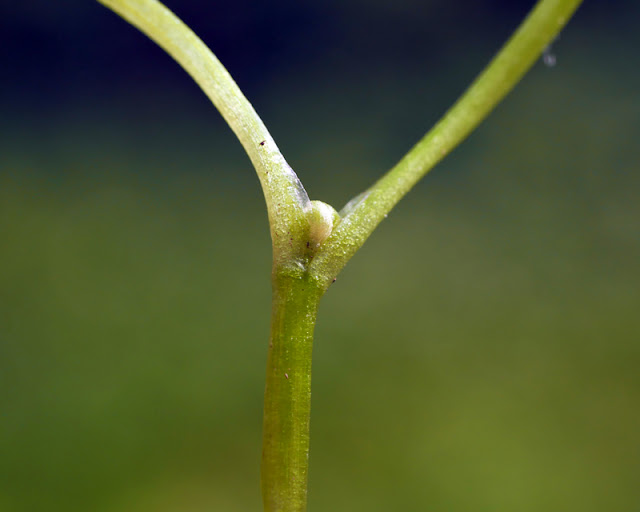 Subspecies verna is usually found in very shaded areas, mostly in dense woodland where not luch light gets to ground level. As a result, the plants have evolved to reproduce not just by flowers being pollinated but have bulbils as a backup in case no insects are attracted to its small flowers in the gloom. Clever stuff to ensure its survival in difficult conditions, as the shade means other plants don't grow there leaving the little Lesser Celandines plenty of room to spread and grow. In these conditions it is not unusual to find dense mats of them mostly spread by these annual bulbils falling to the ground. 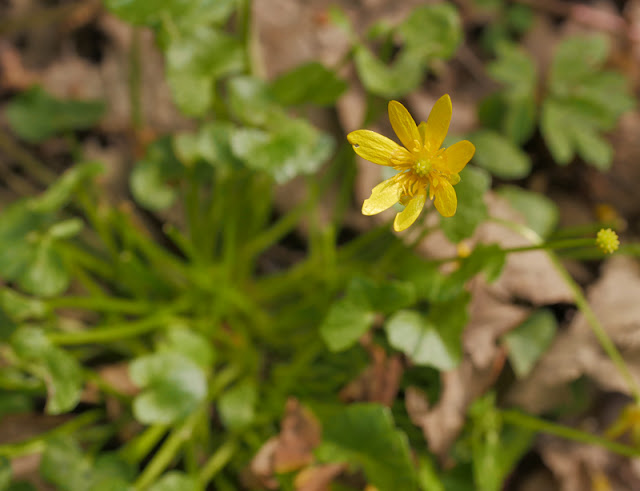 It's a shame I'm only writing about it now, as to look for bulbils yourself, you will now have to wait many months until late Spring 2020 to do so! It was good that I found these still as these little plants are often under recorded as many recorders don't get out in Spring and wait until the weather is much warmer. By then of course, most of these plants have gone over or been swallowed up by emerging vegetation. 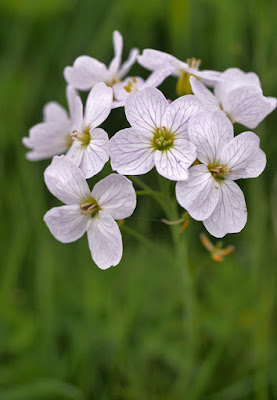 I was very lucky to find another early Spring plant still in flower with just a few of them scattered about a damp open area of woodland - Cuckooflowers.

There's a similar looking species to this called Coralroot which also has bulbils on the stem to reproduce, but those are scarce and not found here.

One of our most beautiful Spring wildflowers I think. 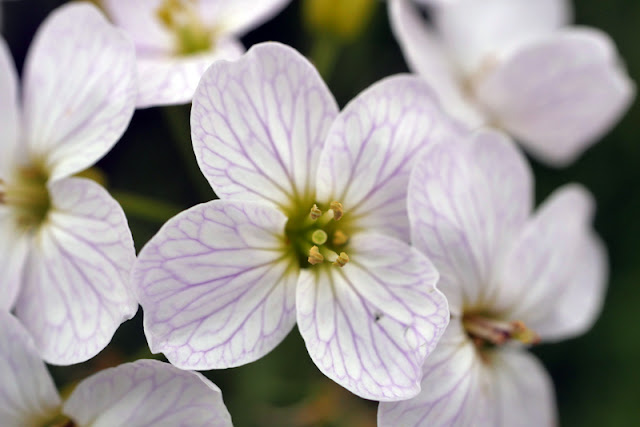 Below is Black Bryony, which can still easily be found now in late July, however, none will be in flower as below. Now they will have big long strings of green, yellow and red berries, though mostly green now until the early Autum when the berries start to change colour. 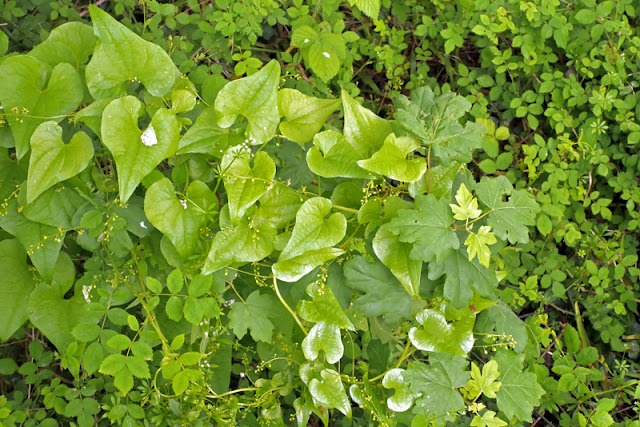 Tamus communis and a tiny pollinator. 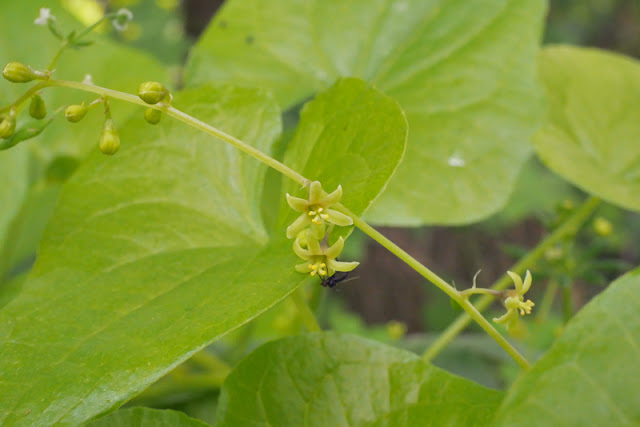 The unusual shape of the leaves of this tree caught my eye. After spotting them I saw lots more. They belong to the Wild Service Tree, an uncommon native tree in Kent. 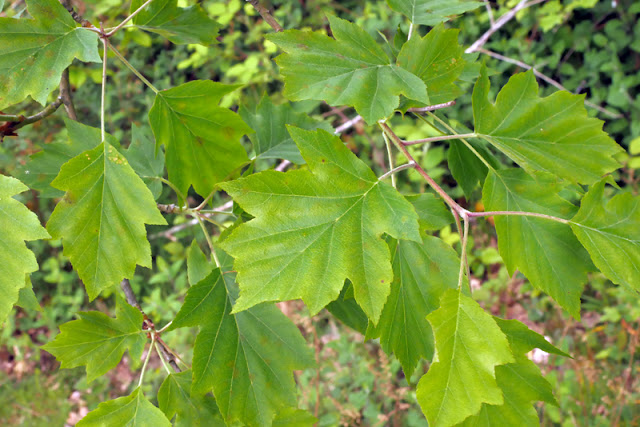 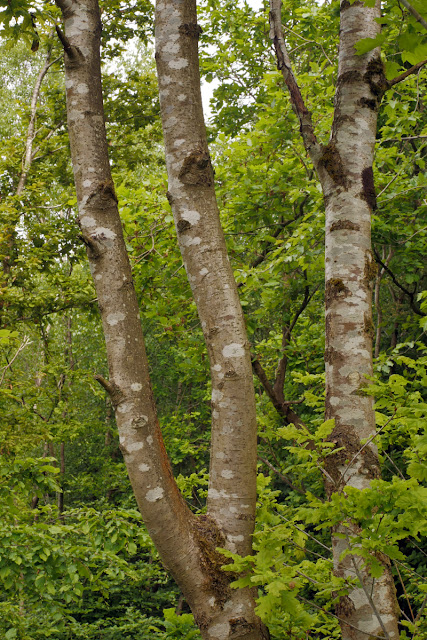 Most of these trees I see are quite small and weedy, out-competed by the likes of the alien Sycamore or Horse Chestnut for example. However, in this wood, there were some big Wild Service Trees. Here is a photo of their tree trunks, I couldn't fit all of it in on the lens I had with me.


I then came to a large coppiced area where the understory plants had re-emerged after years of being shaded out by Sweet Chestnut trees. It was here I found a huge amount of Heath speedwell, a Kent RPR species, so a nice find indeed. If woodlands were coppiced at regular 13-15 year intervals as they used to be, I doubt this plant would be at all uncommon. 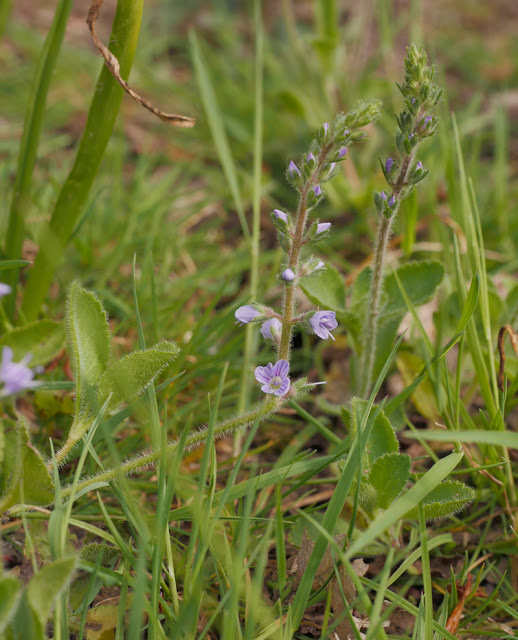 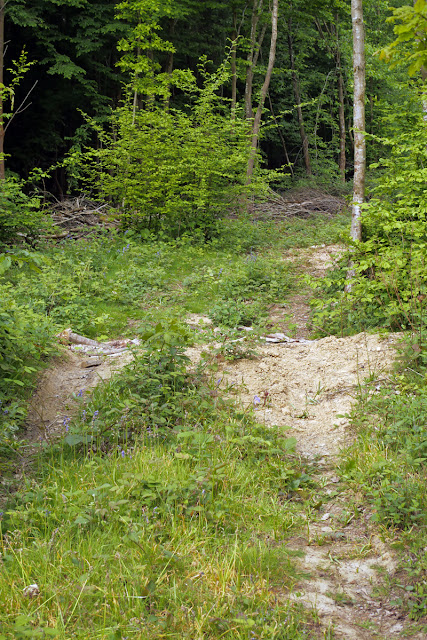 As usual at this time of the year, I found several other Speedwells as I walked into different habitats, including Common Field; Germander; Wall; Slender and Thyme leaved Speedwells, finished off by the Wood Speedwells photographed below. 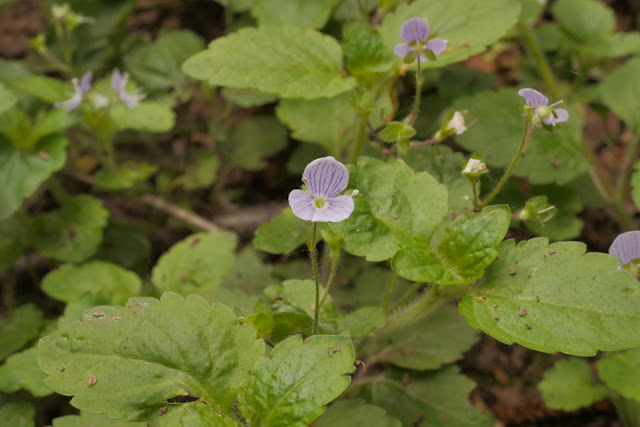 A photo of a Click Beetle, though which one specifically, I don't know. I usually see these gracing orchid flowers at this time of the year, but unfortunately I didn't find any orchids on this trip. 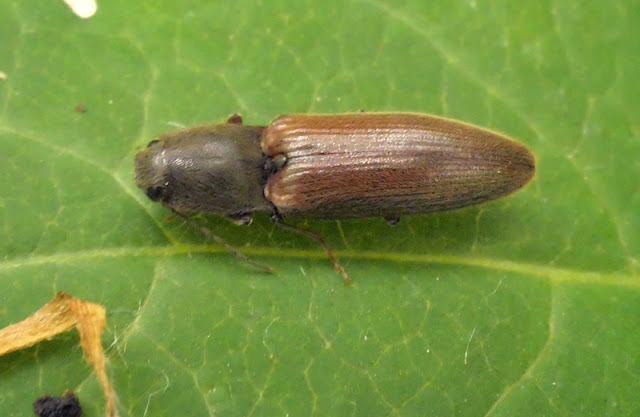 I then left the woodlands behind and came into other habitats, mostly sheep pasture, but a few field edges and ponds as well to keep the species list coming on well. Near one of the ponds in a damp area I found the not so common Bog Stitchwort. It doesn't like it dry and it doesn't like chalk, so I don't often see it in my own area as a result. I was a bit disappointed with the photo, but then I was balancing over the edge of a ditch trying to focus on a breezy day on a tiny plant holding the camera at arm's length to get close.
Of course, I could have just reached down and picked it and set it up for an easy photo - but then if we all did that, there wouldn't be any left. Much like foraging, a good idea in principle, but unsustainable if any large numbers of the population did it too. 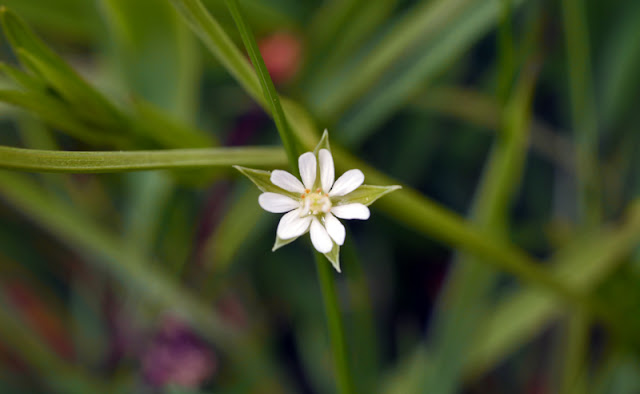 I saw plenty of ferns in the woods, though mainly they were the very common Male Ferns (Dryopteris filix-mas), so it was a nice surprise to find a fern ally in the open, the Great Horsetail. 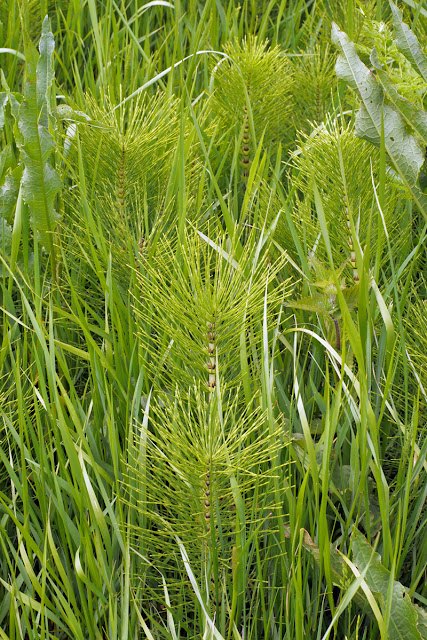 It was too late in the year to see their fertile spikes which are quite impressive, however, these leafy fronds are also quite a spectacle in the wild and can grow over six feet tall (2 metres).


As the next photo shows there was quite a bit of it here. 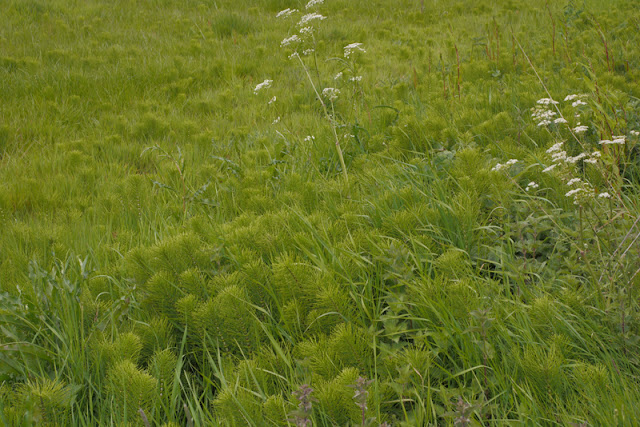 Water Crowfoots are a difficult group to identify and you need good quality close ups of certain parts of the flowers and leaves to get a firm identification. However, in this case, one of the few existing records for this monad was the Pond Water Crowfoot at this exact location recorded by the Kent County Recorder no less, so the record was definitely accurate. 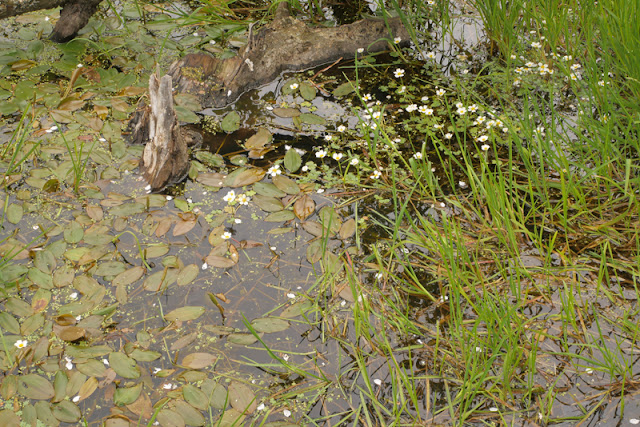 A short while later I came to another pond with identical plants in it, making identification very easy for me. It was also great to see this attractive plant had spread to other nearby ponds and wasn't reliant on a single pond, which if filled in would lead to the loss of the species if so confined. I think water birds such as coots and moorhens spread the seeds or even the actual plants on their feet.

This is my favourite photo of the trip and indeed one I really like as it shows multiple flowers in various stages of development - and there's even some fallen petals in the pond. It shows the floating leaves well and the shape of the nectaries in the yellow part of the flower. There's even a potential pollinator above them. 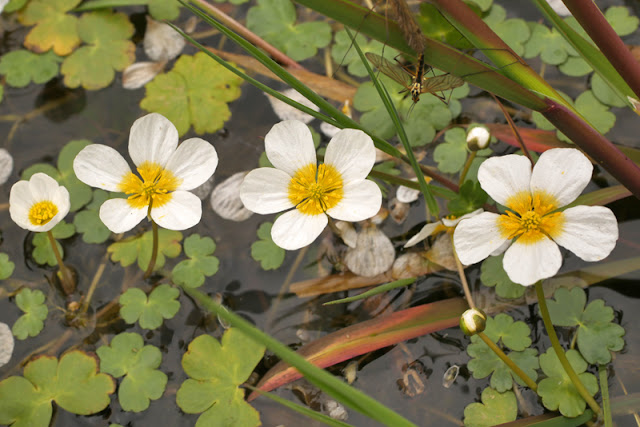 The shape of the nectaries are needed to help confirm an identity with Water Crowfoots, so take a close up photo or draw a sketch of them. 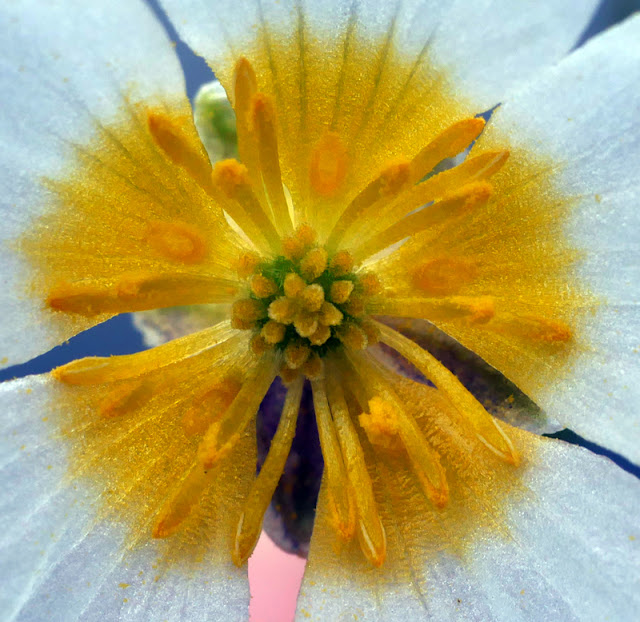 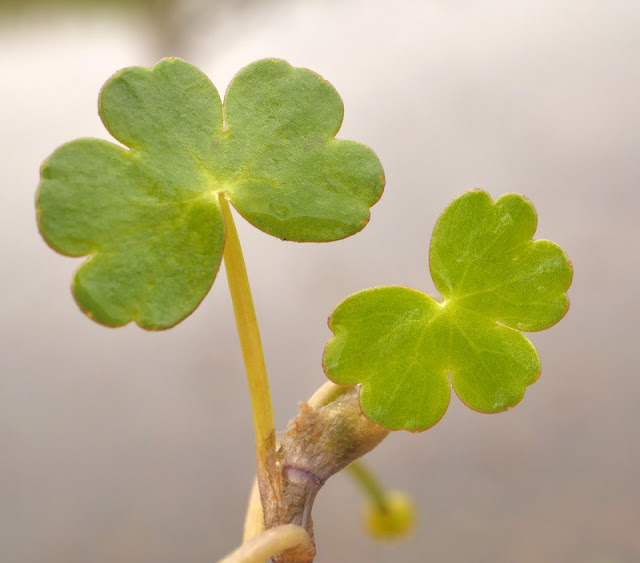 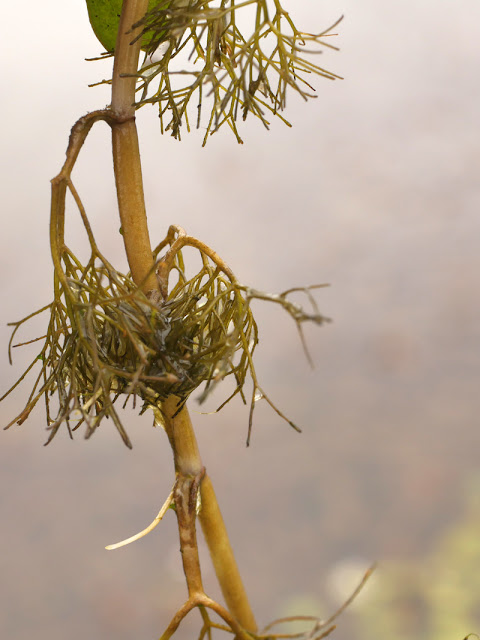 Submerged leaves are also important to examine to determine identity in this difficult group of plants.

These look rather like small root balls but they are actually submerged leaves.


This second pond was a bit larger and deeper than the first and had a substantially bigger colony of plants as well. This habitat photo shows how thickly they carpeted parts of this pond. 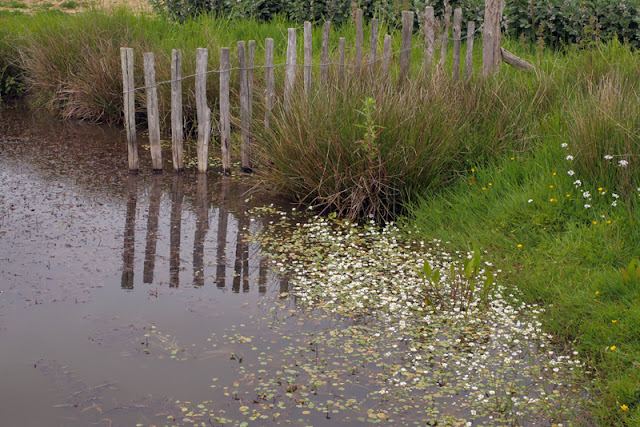 I finished the walk at Ruckinge north and drove the short distance to an area just south of the Royal Military Canal at Ruckinge. It didn't have many modern records (parking was an issue here) but one it did have was an old one for Greater water Parsnip. It was too early for flowers, but I re-found the species by its very distinctive leaves and in exactly the same place as previously recorded by J. Mountford in 1982. Good to see it still there. Unfortunately they were all growing on the opposite bank of a wide ditch to the one I was on, so the photos aren't particularly good, but good enough for an identification. 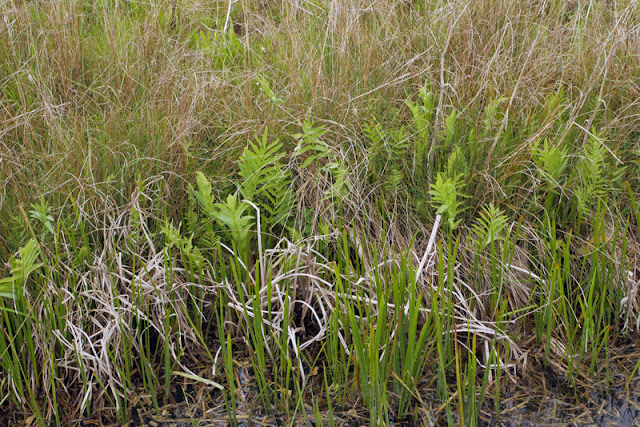 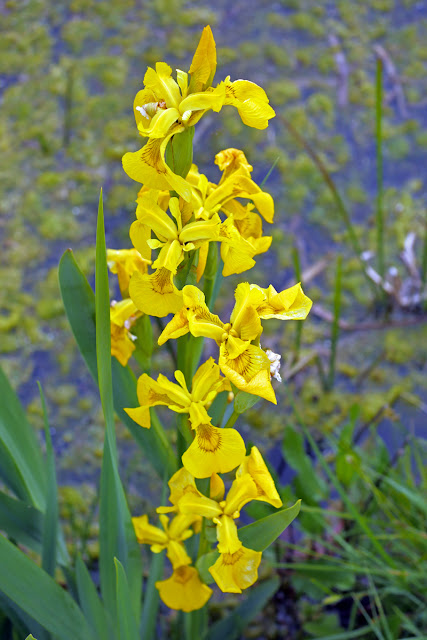 Some late flowering Yellow Flag or Yellow Iris were in this ditch a short way from the Sium plants. I couldn't resist a few photos, even though it meant more precarious perching to get a photo. 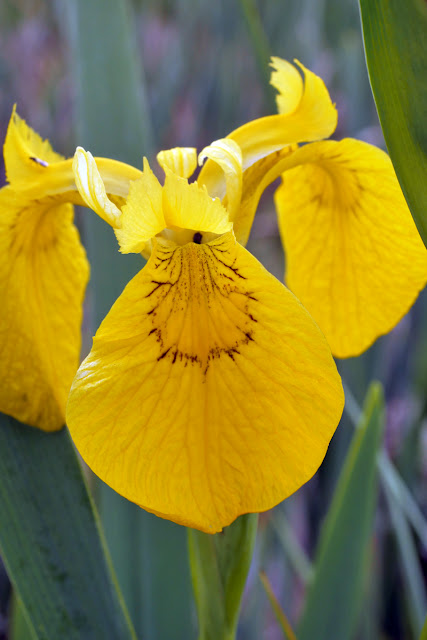 Who says native wildflowers are boring! Both our wild Irises are very attractive plants.
(Iris pseudacorus and Iris foetidissima)


The final plant I photographed was this Spike Rush which had me stunped as it was quite thin and very small, no more than 6" tall for the most part. 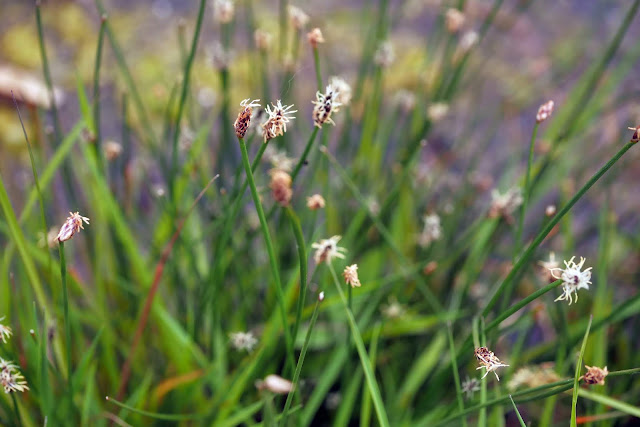 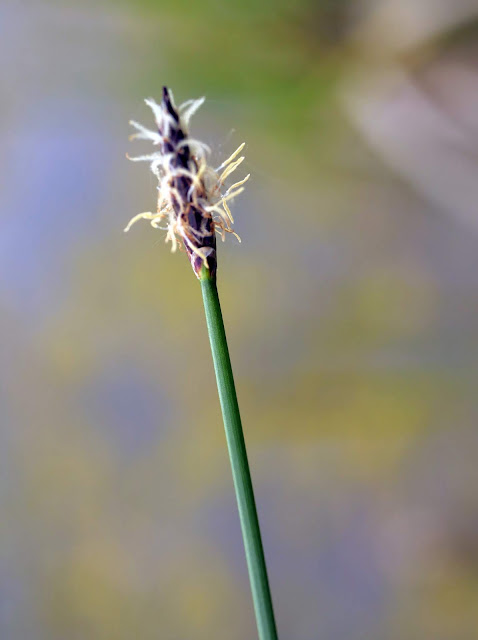 I found it very hard to tell if it had one single glume around the inflorescene or two, the former being the rare Slender Spike-rush and the latter the common spike rush (which actually is quite common).

I sent these and several other photos to the county recorder and this time it turned out to be the Common Spike-rush which has two glumes around the base.

It's all a learning curve though, and it's great that botany as a hobby means I will always have something new to learn and new to see. It never gets stale.

That was it for this part of the day, however, I carried on after this to the coast to see my mother and to have a quick look around Littlestone and Greatstone on Sea. I found some amazing plants and garden escaped species naturalised into the wild, more of that later.