I didn't get to see all of Kent's orchids this year, but I have already featured some on the last two blogs, so here's some more from the first week of June.
I might sneak in some other wildflowers as well when no-one is looking! 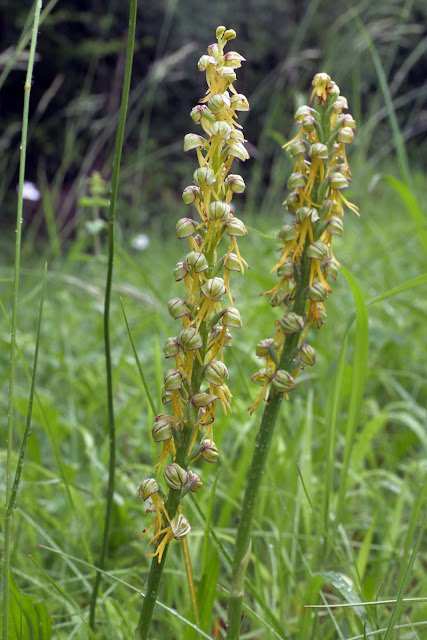 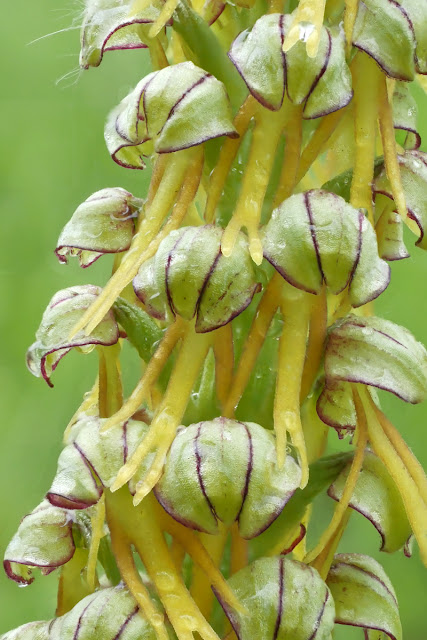 There's a venue not too far away with thousands of these on it, called Darland Banks, a steep hilly reserve in Medway.


However, I rarely go there now as a road verge near me usually has over 300 close to the car with no hills to climb!

These were taken on the busy A225 on a Kent Wildlife Trust roadside Nature Reserve near Eynsford. This is an example of what can happen to our road verges if they are managed properly and mowed at the end of the season and not during it. All the cuttings are taken away too which prevents the soil becoming enriched which Hogweeds, Cow Parsley and Nettles all do so well on. 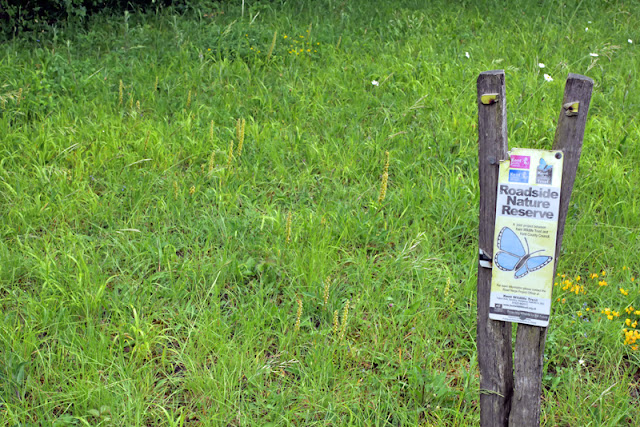 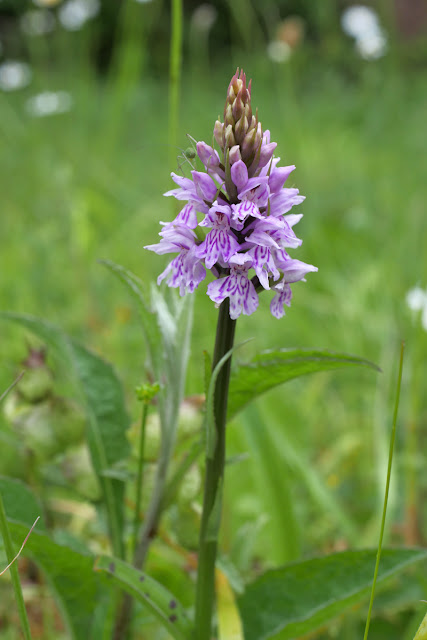 A new record for this RNR was a single flowering Common Spotted Orchid. Hopefully the first of many more to come.
By the end of June there will also be over a hundred Pyramidal orchids here too.

The next venue was in the north downs not far from Luddesdown. Six years ago this was pristine chalk turf but had now scrubbed over from neglect, so it is likely that by 2025 there will only be young woodland here and no orchids. 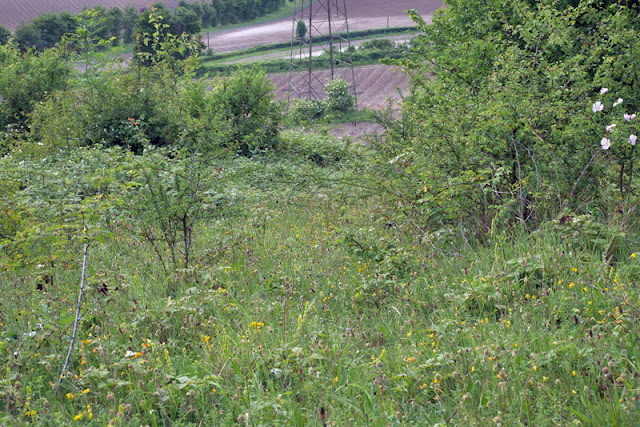 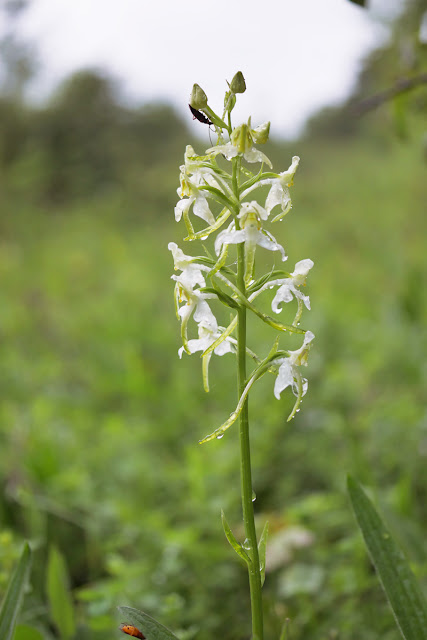 This was the star attraction here , a Greater Butterfly Orchid, a most graceful plant in flower, it''s long spurs pollinated by moths. 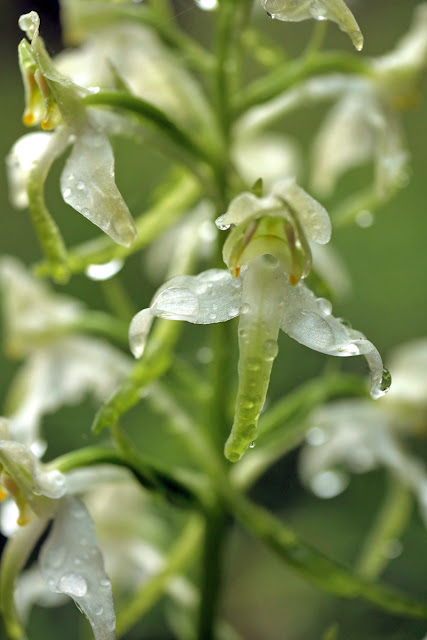 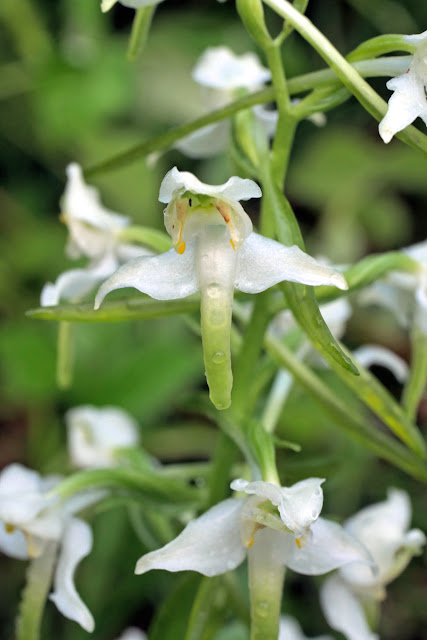 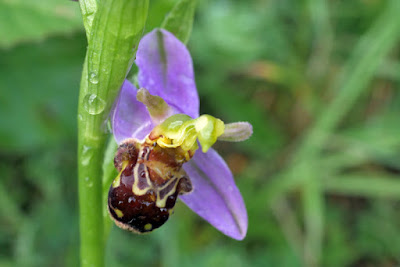 I found just one Bee Orchid and one Man orchid here as well. The latter used to number over 50 a few years back. 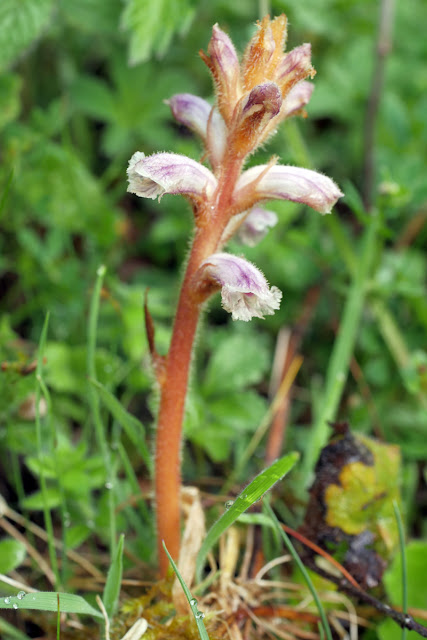 Here's a plant that novices sometimes mistake for an orchid, it's a Common Broomrape. It's parasitic on a number of species, but quite often on Clovers. 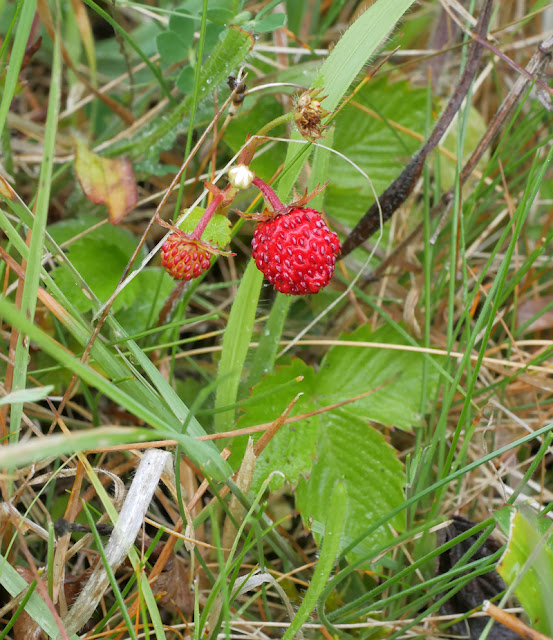 A Wild Strawberry with its tiny fruits. 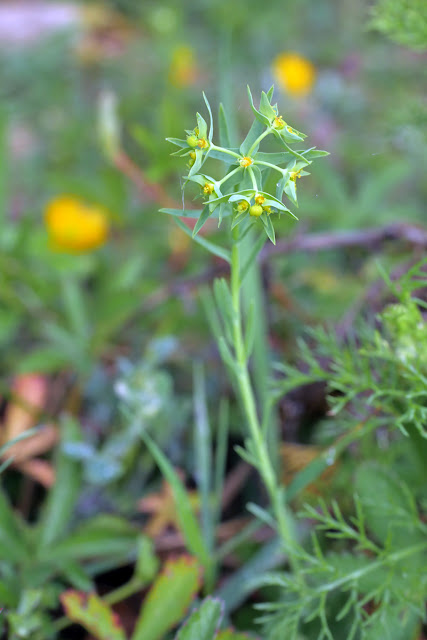 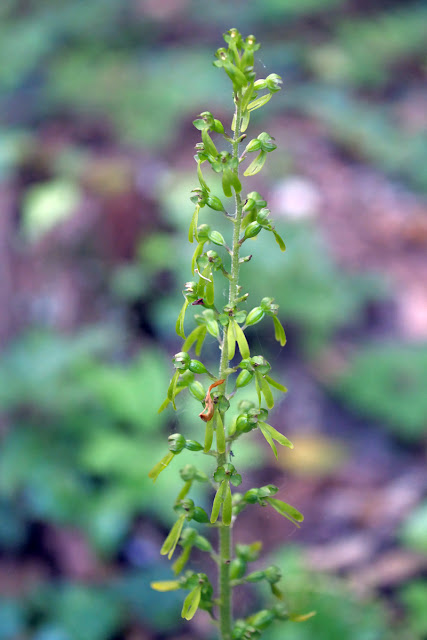 We've moved onto another venue now, a KWT reserve north of Maidstone.


This is a Common Twayblade, an unimposing orchid and annoyingly difficult to photograph!


At the base is a big pair of oval green leaves. 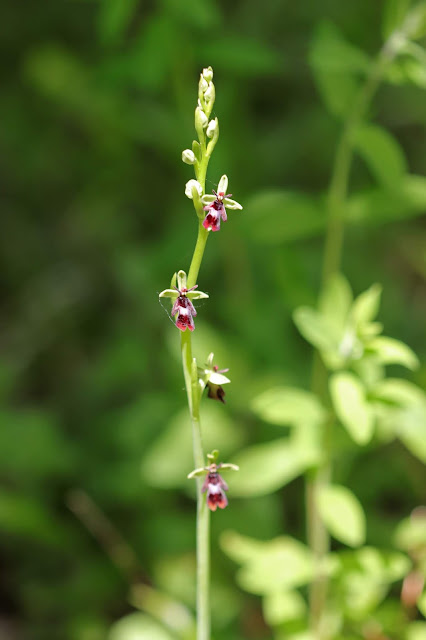 Another difficult to photograph plant and one that is hard to find in the first place is the Fly Orchid. 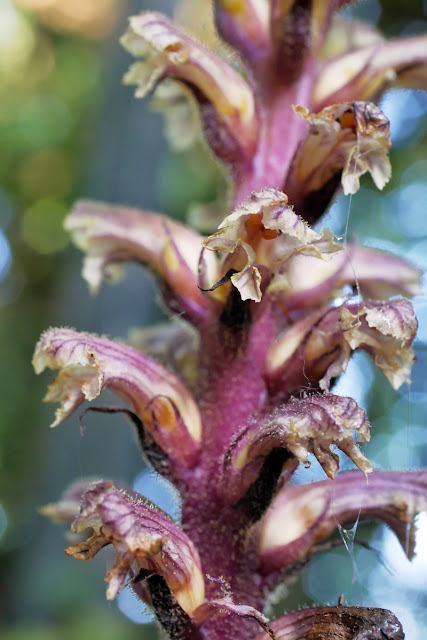 Here's another one of those parasitic plants like the one above, however this one only attaches itself to Ivy and is thus called Ivy Broomrape. 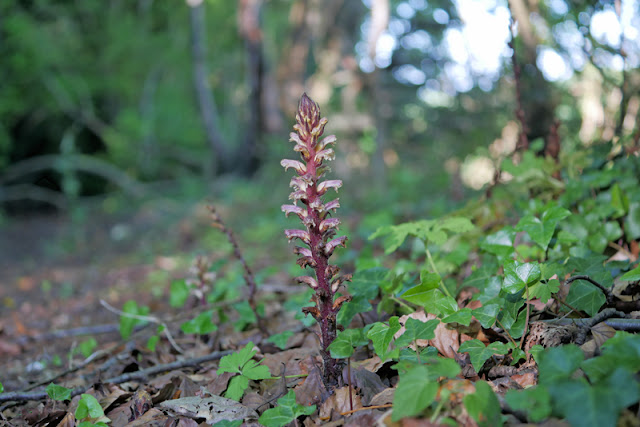 Still here to smile at me were some lady flowers from the beautiful Lady Orchid. These flower and peak in mid May, so these were very late and rather pale too. Most had gone to seed. 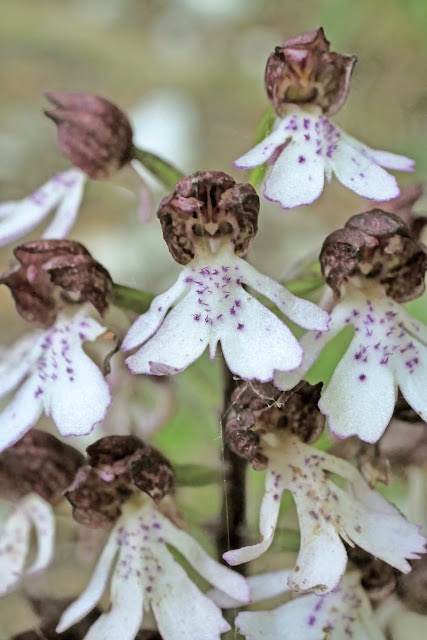 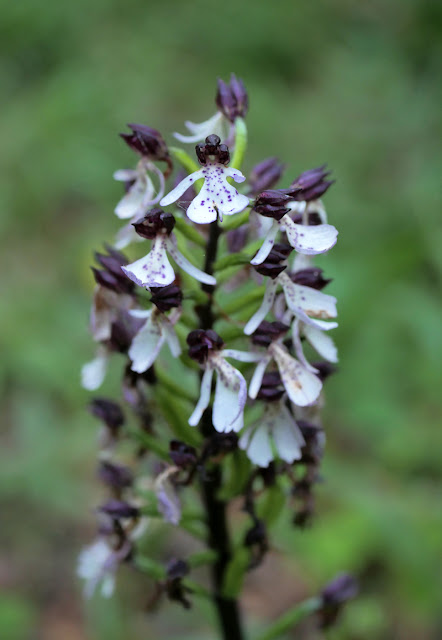 And here is my last orchid from these few trips in early June. I was particulary pleased to find this again, as I thought it might have been dug up the previous year. I saw it in bud, then a week later it had disappeared. I now assume someone passing picked the flowers! 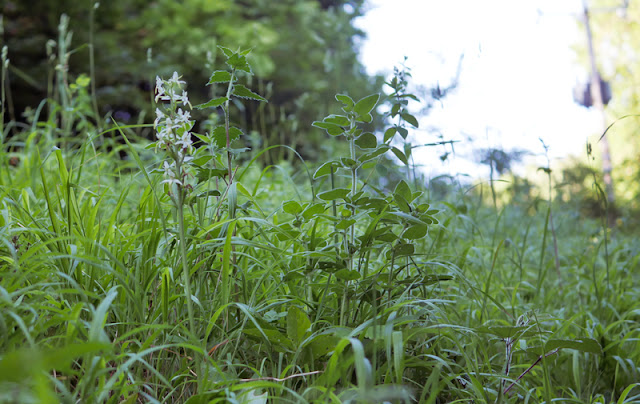 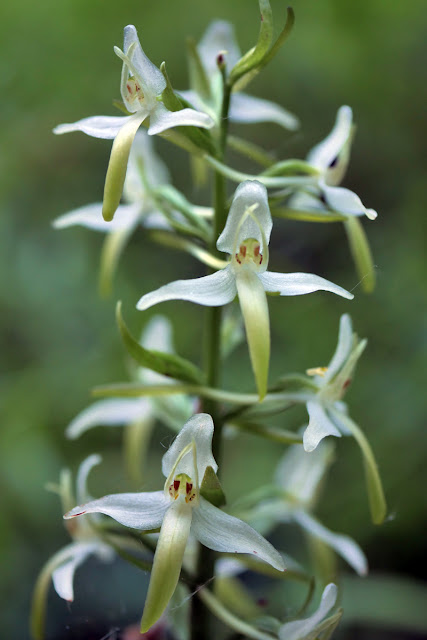 
The only obvious difference between the two species is that this one has parallel pollinia, whereas the Greater has pollinia curved in towards each other at the top.

The pollinias are the small brown anthers carrying the pollen. 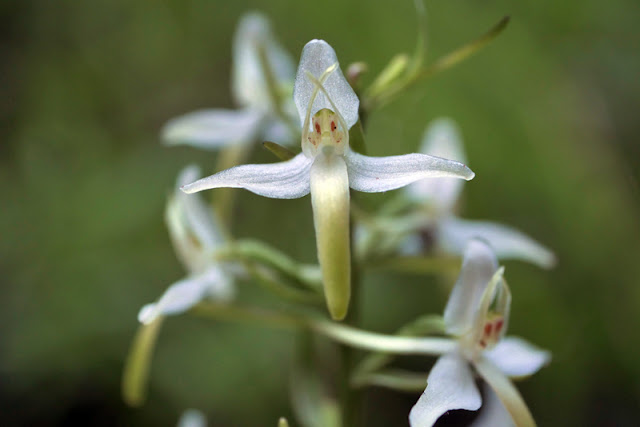 So ends this blog, I hope you liked it, even though it was a composite of a few short trips over a week.