A Journey To Some Fine Kent Orchid Sites 14th May 2016

- May 21, 2016
Wild Orchids hold a fascination and are what drew me into botany in the first place. That sense of wonder when you first see a Bee Orchid, wondering what the hell it was! Well it's a few years on from those wonder filled days, and I have now seen most, if not all of Kent's orchids. However it doesn't stop me from going back once in a while to re-discover their beauty and that's what this day was about.
Where possible, I am happy to publish where I find wild orchids, provided they are already well documented on the internet. Sometimes I have to keep locations quiet though, in case of theft or trampling of very rare orchids.
First up was a site near Faversham with just such a rarity, a hybrid of the Monkey and Man Orchid. This hybrid hasn't been seen here for many years but it has occurred in the past, it's a stunning plant! 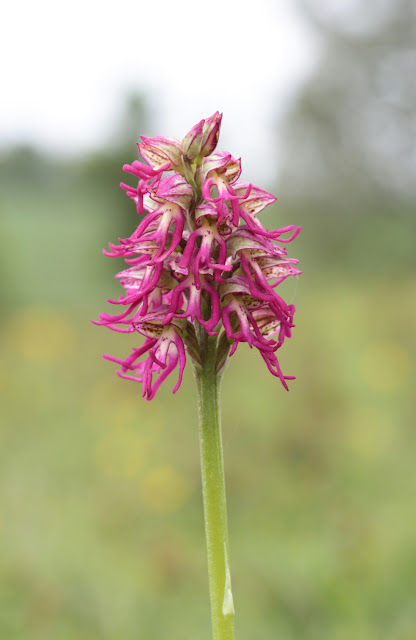 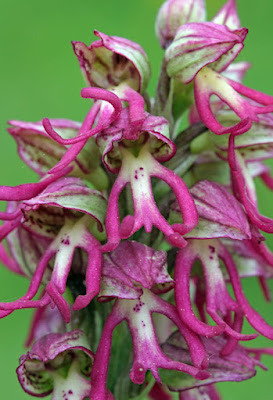 It wasn't very tall, only about 8-10" but crammed with flowers. Luckily, I saw it at its best with all the flowers open.

The green veined hoods are the genes from the Man Orchid, with the Monkey figures hanging down, superb! 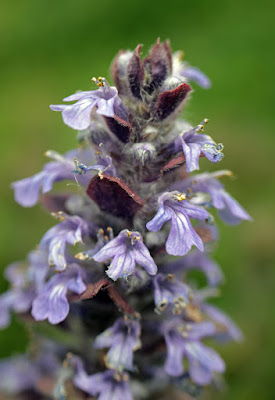 Bugles were up as well, 8" spikes crammed full of flowers, but these are not orchids.

I found a pink form too. 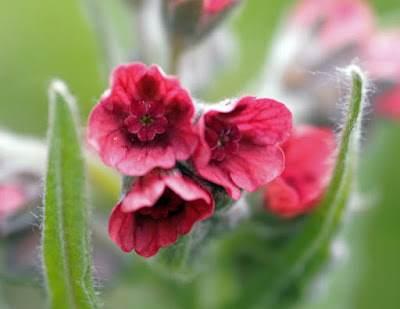 Scattered here and there were the much taller Houndstongue, a declining and now rare plant in Kent with hairy leaves giving it a silvery appearance.

From here we drove down to East of Canterbury to see if there any Birdsnest Orchids up. They were at this time last year, but alas, none were to be found yet. The cold late Spring really has had an impact on some wildflower timings. 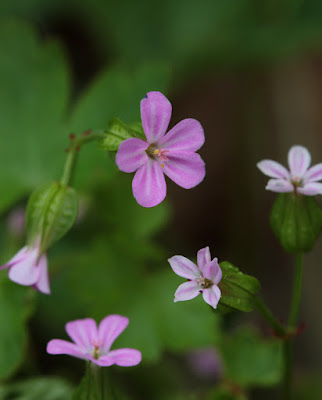 However, on an arable field edge I found lots of these Shining Cranesbills.  For some reason i haven't found them in North Kent yet.

Their leaves are glossy green, often edged red and the calyx is inflated somewhat, quite different in appearance to other Cranesbills. 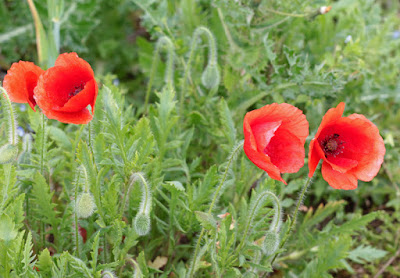 Common Poppies were starting to show on a field edge


From here we headed South to Kent Wildlife Trust Park Gate Down reserve. This is quite an exceptional place with many orchids here, though some won't come up for another month or so. Here's what we did find. 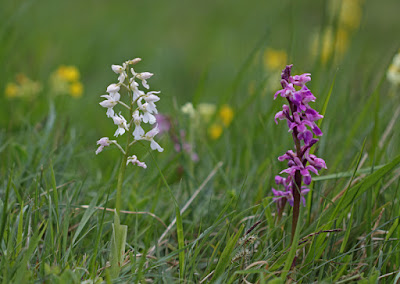 There were a large amount of Early Purple Orchids in fine condition, with a few all white variants as well. I was fortunate enough to find these two growing close together to get both in the photo. You can see Cowslips in the background still going strong. These should have seeded by now in a usual Spring. 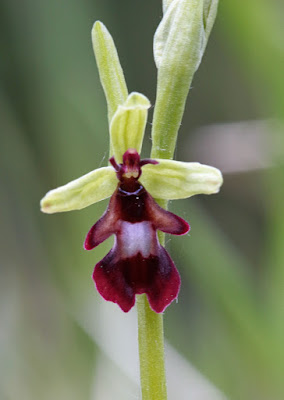 As we continued through the meadow we found 20 plus Fly Orchids, mostly in the same area. They are very easy to miss, often only 6-10" tall and very thin stalks. The trick is to crouch down low on the path and if present, they will then stand out and catch your eye. 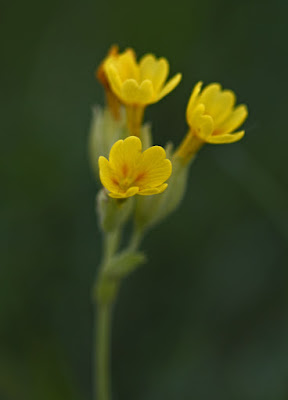 Here's a Cowslip, there were still hundreds in full flower, which is quite late considering we're nearer the end of May now. 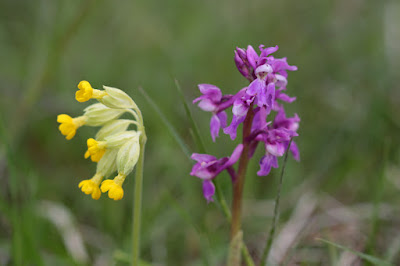 This gave rise to some nice photographic opportunities! 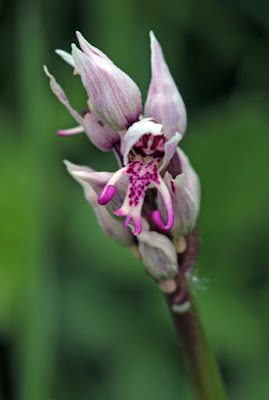 There was a solitary Lady Orchid in the meadow, but it hadn't opened yet


The final flower of note was the beautiful Monkey Orchid, the only UK orchid to open its flowers from the top down, rather than the other way around as all the others do.

Again, these were very late flowering this year and this was the only flower out at all!


From there, we had  slow drive through very narrow country lanes to Kent Wildlife Trust Yockletts Bank reserve. This is a lovely intimate site with some rarities growing there. 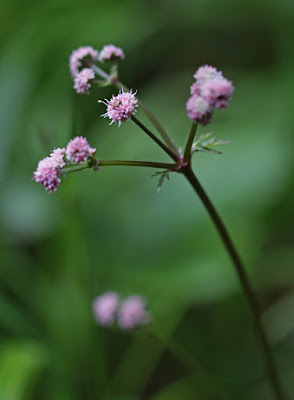 This is Sanicle, a woodland flower on chalk, now uncommon and declining. 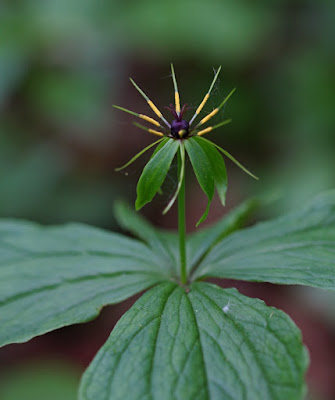 As we walked up a hill there was a stand of Herb Paris, a beautiful flower. It has no petals at all with exposed stamens and ovary with bright golden pollen covered anthers.

I've yet to find this in West Kent, though there are a few scattered records of it from the past. 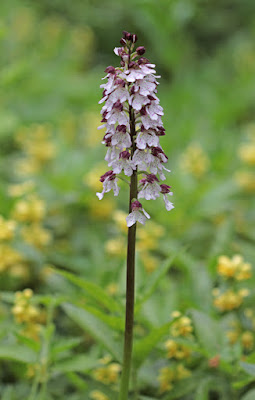 Yockletts is known for its lovely Lady Orchids and all were in full flower now. KWT have opened up a copse in the woods since my last visit and some Lady's were flowering amongst a host of Yellow Archangels, amazing to see. 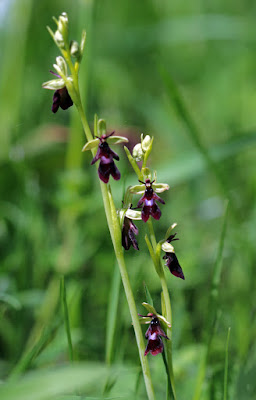 The Fly Orchids here, for the most part, were much taller and multi flowered and very easy to see! 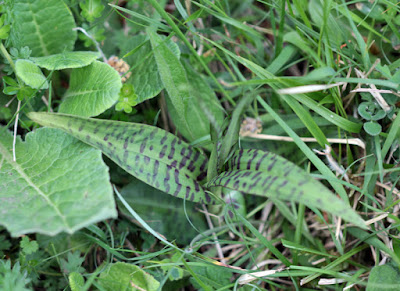 Here's the rosette of an orchid that will flower in a few weeks time, the Common Spotted Orchid. Their flower colours and markings are highly variable, so giving us plenty of interest determining whether they have hybridised with other orchids or not. 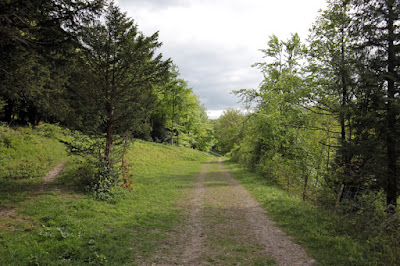 From here we drove a short way to Denge Woods, South of Canterbury. This is a huge wood, but the place to head for is a long chalky area called Bonsai Bank. If you google that you can find out why it got that name from the 1960s.

It's about a 2km walk from the car park though with some hills. 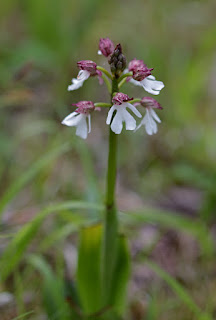 As expected, there were literally hundreds of Lady Orchids flowering on the bank, they seem to love it there.

Every now and again you can come across a colour variation, such as this pale hooded almost white flowered variant. 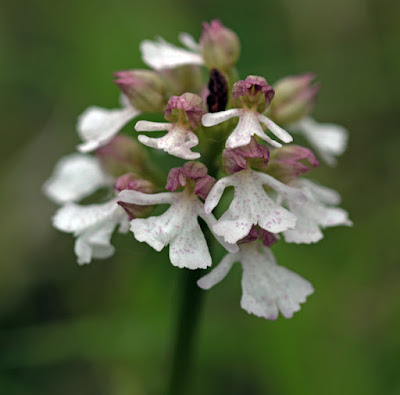 Greater Butterfly Orchids should have been in flower as well, they are often 3' tall stunners, but alas, once again they were still quite small and in bud, delayed by the recent cold snap no doubt.

Duke of Burgundy butterflies should have been flying around but by now it was late afternoon with cloud cover, so we didn't see any of those either. 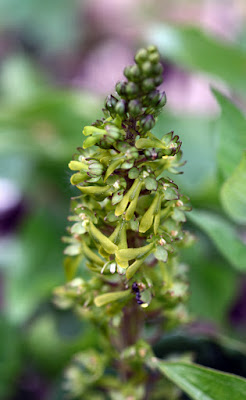 Common Twayblades were at all the sites we had visited so far, but this one was crammed with flowers, whereas they are usually a thin spike with a few flowers up the stem in a loose fashion.

I've not seen Twayblades like this and I wonder why it came about? I found about a dozen in the same area all like this.

I'd call it var. densiflora!

Twayblades have 2 big round oval basal leaves which the similar (to a degree) Frog Orchid hasn't got. 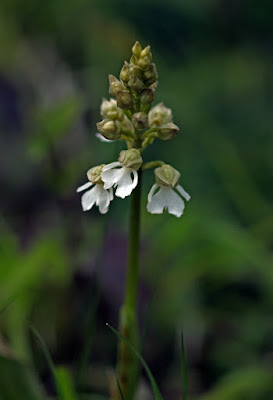 I was then very fortunate to find not one but two all white Lady Orchids, a variant I haven't seen before and quite rare to find. These were growing at the base of some of the pine trees not cut down in the 1960s, so maybe that caused the genetic variable here? 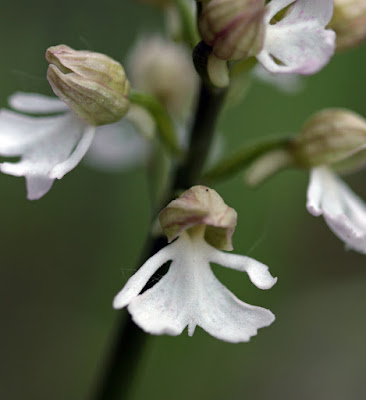 The Bee Orchid variant that lacks all pigment is called var. chlorantha but for some reason this doesn't seem to apply to Lady Orchids. 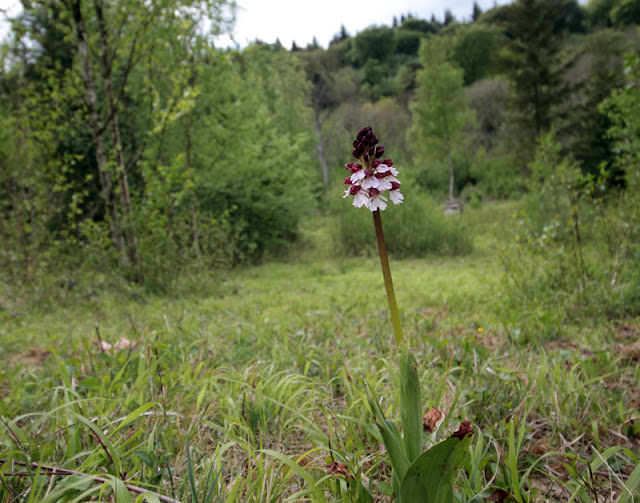 From now until the end of June is the peak time for Kent orchids, so go out and see if you can find any and by all means post your photos to me on Twitter @Barbus59 I'll also help identify any wildflowers you come across, though I can't promise I'll get them all!