- September 03, 2016
This is only a short blog where I revisited this venue to see some rare plants. Though I had seen them in previous years, I like to revisit to see how they're getting on or not as the case may be.
This country park is quite large, comprising mainly of woodland with some small lakes and overgrown quarry areas.

As I parked the car I was very pleased to see this Purple Emperor on a car boot sunning itself. I'd not seen one here before. Last year I was treated to an odd coloured Silver Washed Fritillary, it's a good butterfly venue. 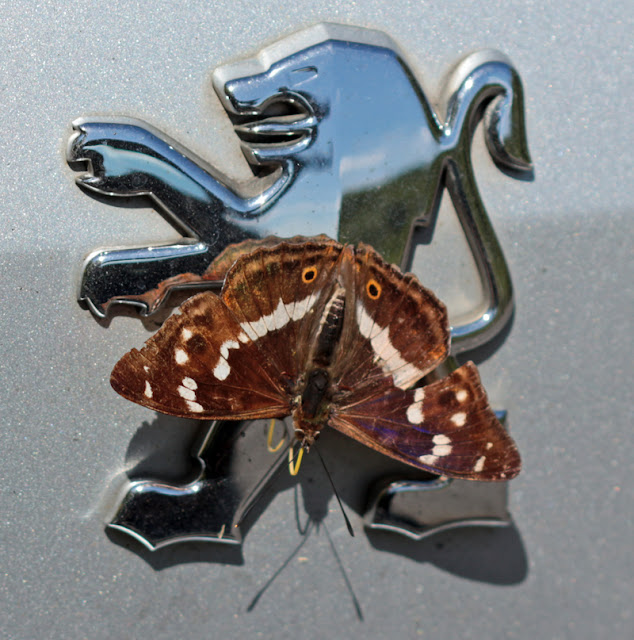 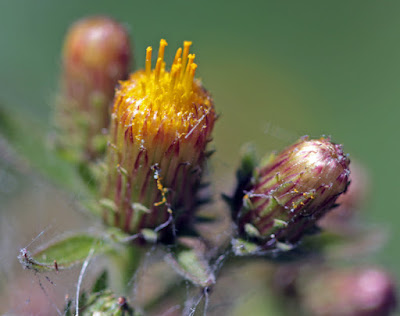 I came across the first Ploughmans Spikenard I'd seen flowering this year. They flower in late Summer and the flowers completely lack ray florets. They are a tall, bushy plant so are easy to spot. 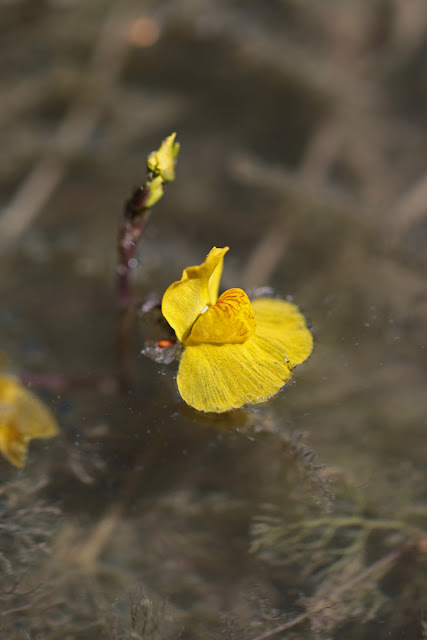 I then came to the small lakes, one of which was dotted with the flowers of Greater Bladderwort, an insect eating species! Its underwater leaves have bladders which implode on touch, sucking in a hapless water insect like a Daphnia. 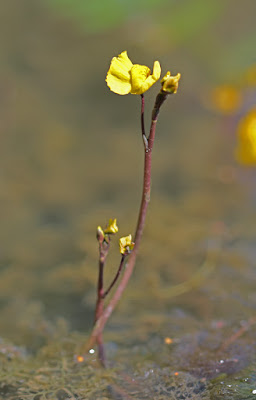 They are a rare plant in Kent, and are on the RPR. I don't know why they are in one lake but not in another right next to it, maybe conditions aren't right in the other lake? 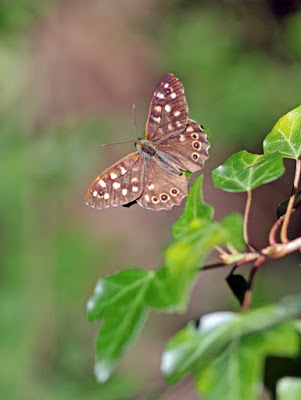 As I entered the wooded areas, Speckled Wood butterflies were numerous. The paths are kept open, with a wide verge allowing lots of wildflowers to grow and attract insects and butterflies. There are numerous Dragonflies here as well, attracted by the abundance of flying insects. 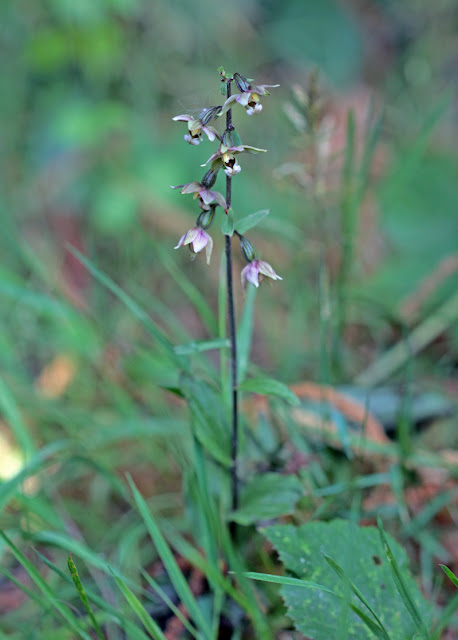 It wasn't long before I spotted a clump of Violet Helleborines, a beautiful wild orchid that is close to being rare as habitats are lost.

They are generally smaller than the more common Broad-leaved Helleborines, with purple stems and narrow leaves. They are usually found in heavy shade, often under Beech trees. 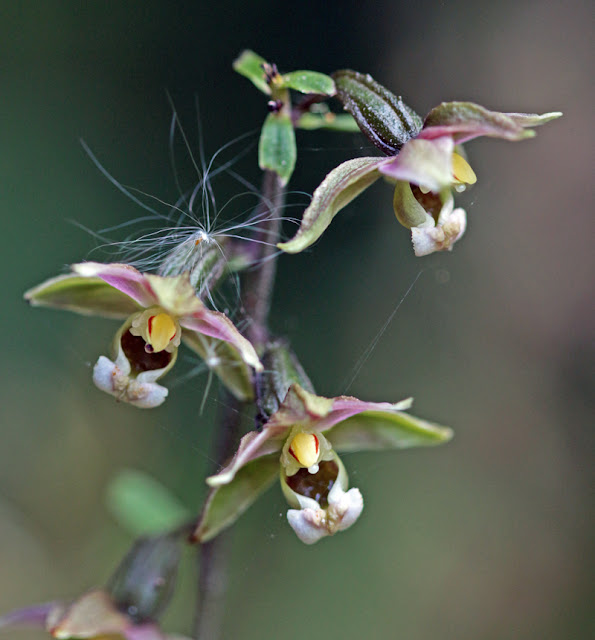 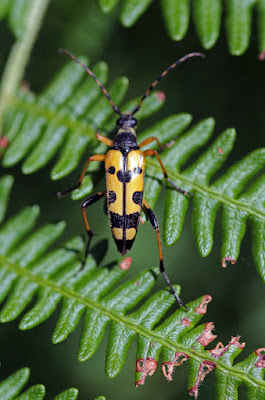 I found two colonies of these beautiful orchids along one of the woodland paths, whereas in previous visits I had just found one colony. I think the other was probably there but I missed them first time around in the heavy shade.


On the way back to the car I found this Long Horned Beetle on Bracken. They're quite a large bettle and vividly coloured. 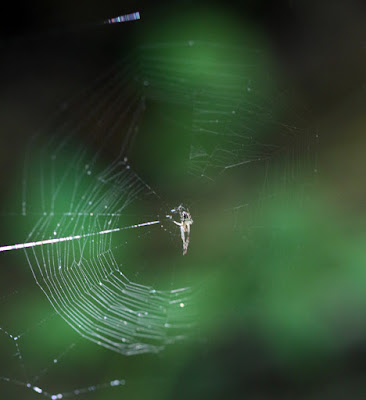 A shaft of sunlight coming through the canopy illuminated this spider in its web. The photo didn't quite work out, but I have included it to show you that there's always natural delights hiding away wherever you walk.


That was it for this short walk. I'll leave you with another photo of the Purple Emperor 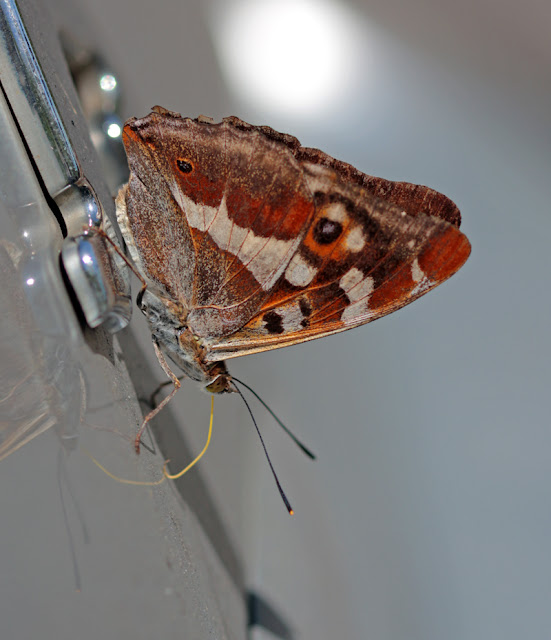 And a final photo of the Violet Helleborine.
All in all, Shorne CP is a great place to visit, though as in all of Kent's country parks the car parking fees are rather steep if you only want to stay an hour or two. 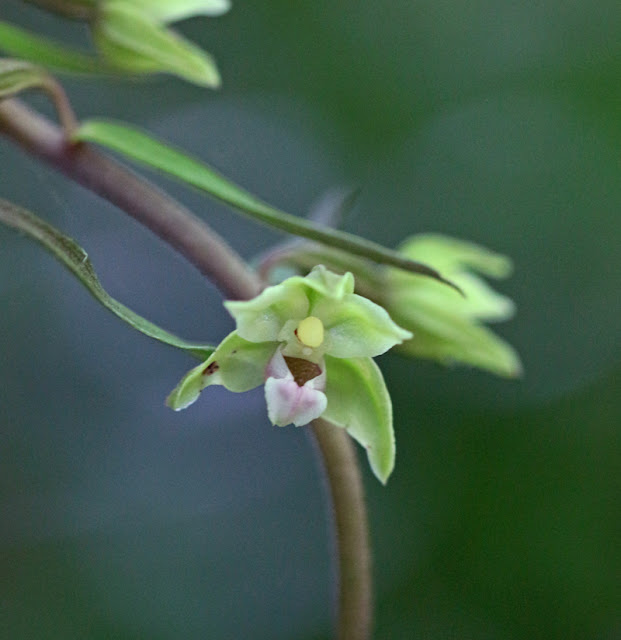