As we drove off towards East Kent we didn't really have an idea where to go. As we got onto the Thanet Way we decided to re-visit Monkton Quarry nature reserve, a place which we haven't visited since 2013.

This venue is a medium sized old chalk quarry now given o ver to wildlife. As such, you get a huge diversity of plants, insects and animals there. We spotted Peregrine Falcons and Buzzards over the cliff edges.

You can read all about it and see reserve photos here:   http://www.monkton-reserve.org/ 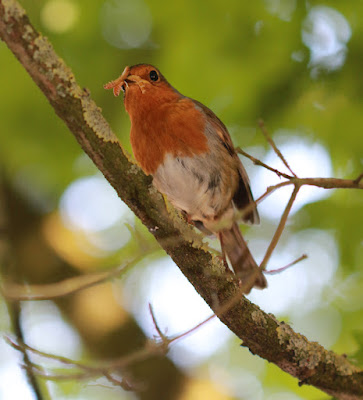 It cost £8 for a family to enter, but is well worth it. It's much cheaper if you buy an annual ticket for about £15 (from memory).

First off was a visit to a bird feeding area next to the entrance to hand feed live mealy bugs to a Robin which had a nest nearby.

I couldn't quite get a photo of it in the hand as it was just too fast for me to capture. 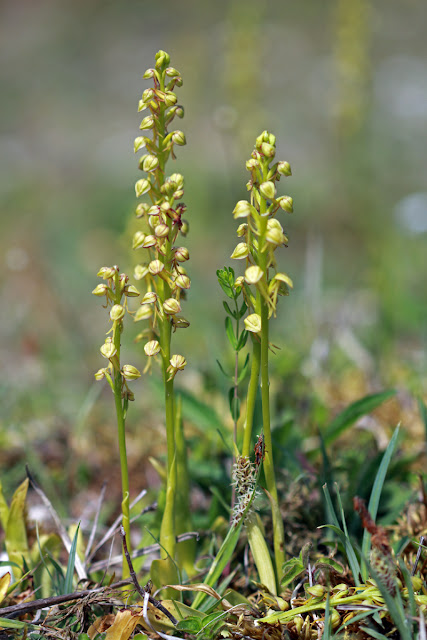 This is an excellent venue to see several orchid species as well as the usual chalk loving plants.

There were hundreds of these Man Orchids in several areas of the reserve. 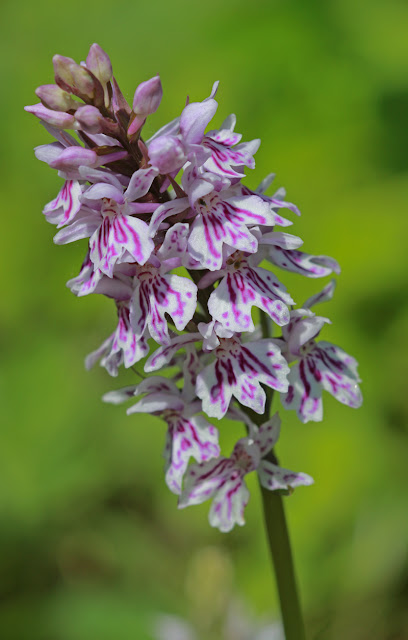 Common Spotted Orchids were coming into flower in good numbers. Their variability in patterns and colours is always interesting and if Marsh Orchids are nearby, a hybrid plant is always on the cards. 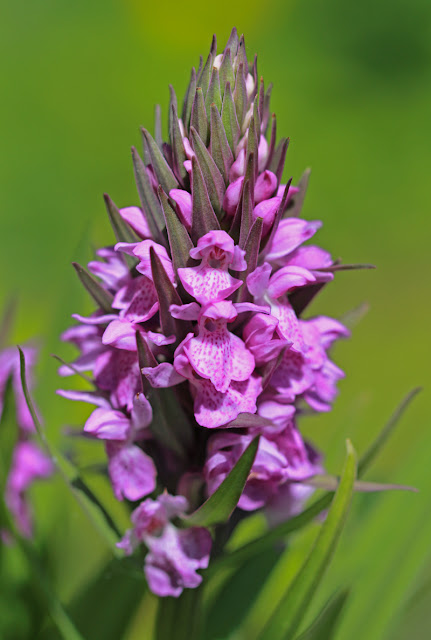 Of course, with the base of the quarry being close to the water table, and thus damp, there were plenty of marsh orchids, in particular Southern Marsh.

Due to a lack of rain, most were much smaller in height than usual, but they still put on a fine display. 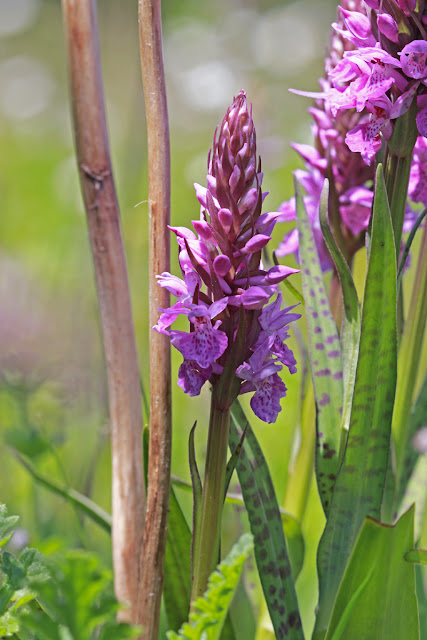 Nearby was a group of Leopard Marsh Orchids, a Southern Marsh variant with lightly spotted leaves. 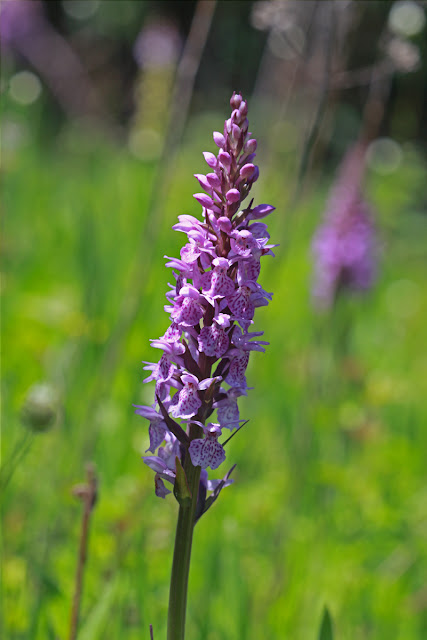 Of course with all these species in close proximity, hybrids are highly likely.

You can usually find them easily as they are often 2-3 times the height of all the other orchids around them, as this one was.

It's a hybrid between Southern Marsh and Common Spotted orchids, quite common where the two species grow together.


This giant had dark barred leaves, lacking the light coloured spots of the Leopard Marsh, the plain leaves of Southern and the small spots on Common Spotted. 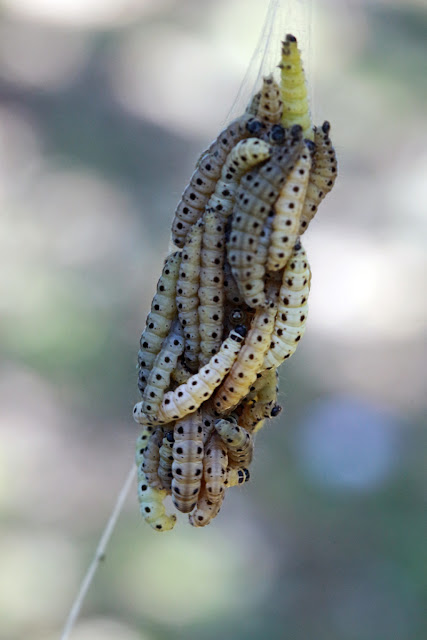 If you're squeamish, scroll down quickly!

As we walked up the cliff path towards the top part of the reserve, there were hundreds of large caterpillars in groups dropping slowly off trees to the ground. These were about 3 feet off the ground and 6 feet down from the tree, suspended in mid air, blowing to and fro in the breeze.  Many clumps had already made it to the ground, where no doubt they will pupate.


Easy to walk into!

Butterflies were numerous, but I only managed a photo of this tiny one, a Green Hairstreak. 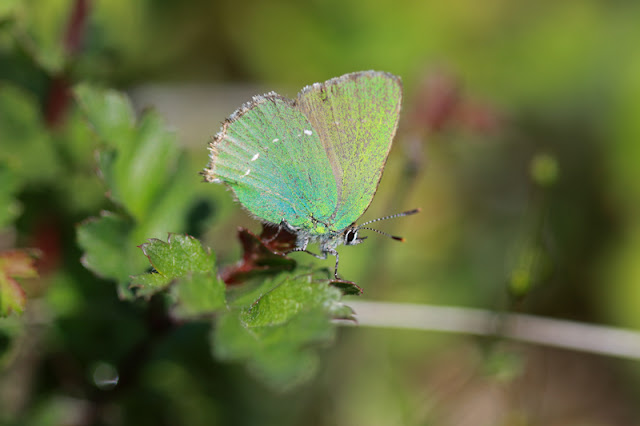 Back in 2013, there were Bee and Lizard Orchids here, but we couldn't find any today. 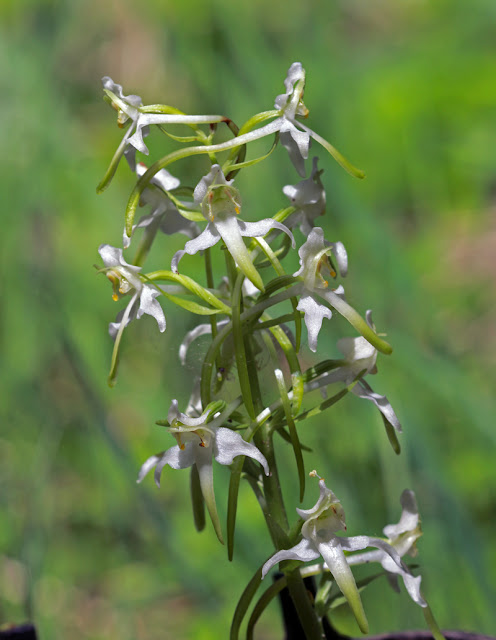 However, we had been told of a single Greater Butterfly Orchid flowering, but the lady at the entrance didn't know where it was.

I guessed it would be under shade of mature trees and the only place for this would be on the cliff tops.

Sure enough at a Y junction of paths we found it.

It's a beautiful orchid but difficult to photograph, being so 3 dimensional and growing in an area with a stiff wind!

It took a long time to get a few in focus shots due to the wind. 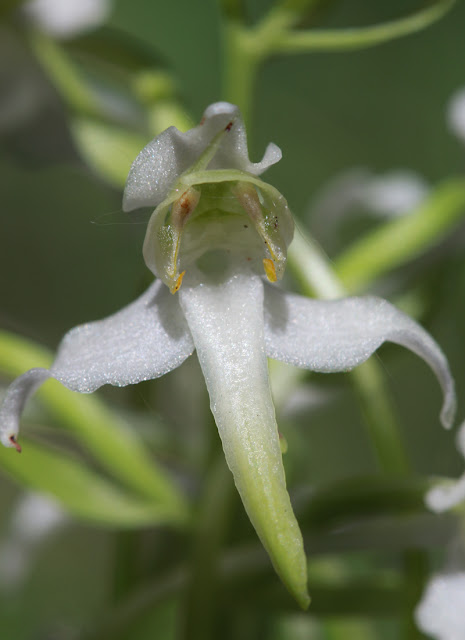 Here's a macro shot of the flower. If you look at the bits poking out with the pollen on them, you'll notice they spread slightly apart. It's this feature that distinguishes it from a Lesser Butterfly Orchid which has dead straight bits (pollinia).

I hope that makes sense - I'm trying not to use botanical terms in describing it.

Some say, the Greater Butterfly is bigger and more densely flowered than the Lesser, but I haven't found that to be the case at all.

It seems this species has only split into two recently in evolutionary terms and this is the main visual difference between them.

Go find some and let me know! 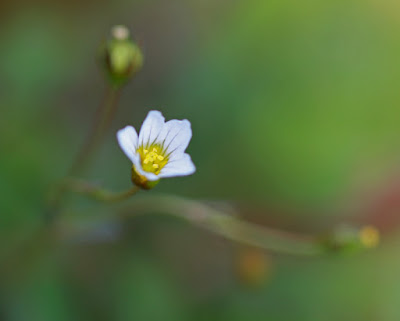 We then made our way back down passing plenty of Fairy Flax on the way. This is a tiny flower with very thin stems that weave in and out of grasses. 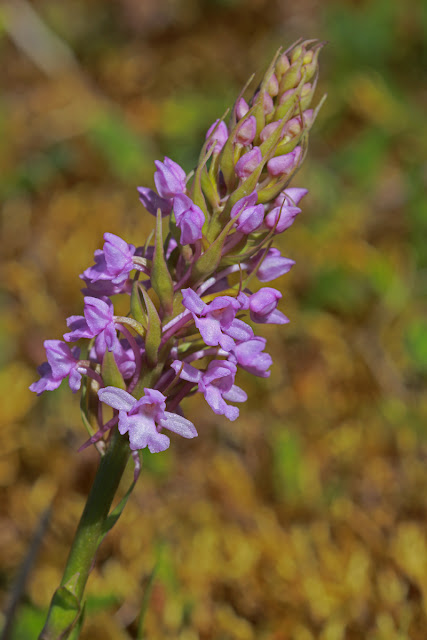 Chalk Fragrant Orchids were dotted here and there, these can also hybridise with Common Spotted Orchids, but I didn't find any today. 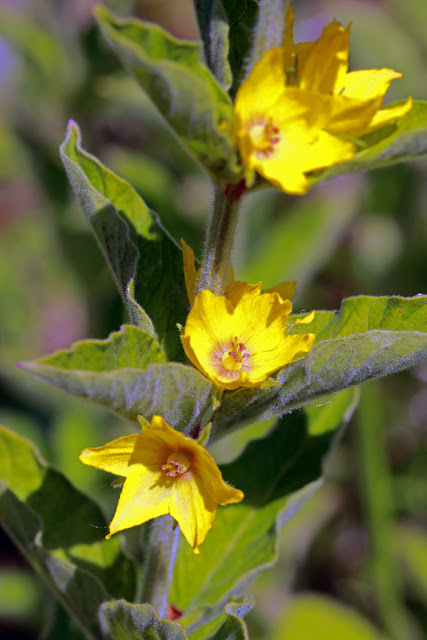 The final plant here was a big stand of Dotted Loosestrife, a naturalised garden escape.

In the bright sun I thought they were the rarer Yellow Loosestrife, but it's now clear to see the purple centres to the flowers denoting the former.

We then left here and went to a nearby location known for other orchids. It's a very small area in a triangle of roads with ancient Beech trees filling it.

As I parked the car on a verge there was a clump of White Helleborines (these are orchids) that usually grow in heavy shade and hardly ever open their flowers. So it was great to see one in normal light fully open.
I guess that the roadside trees had been cut back allowing in the light. 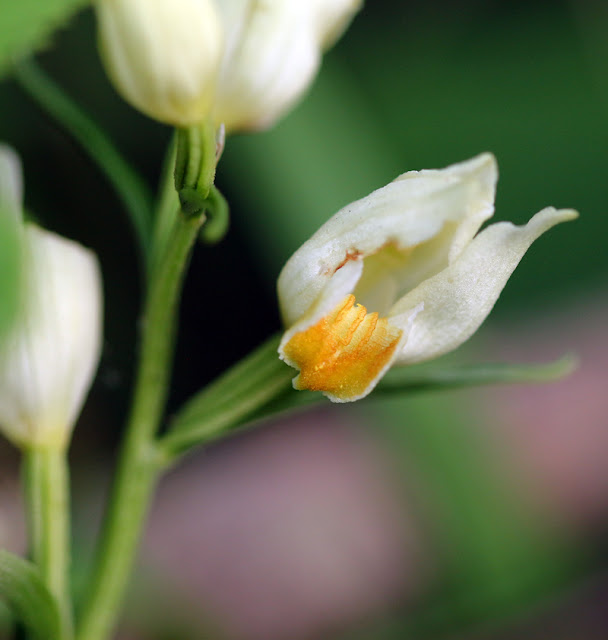 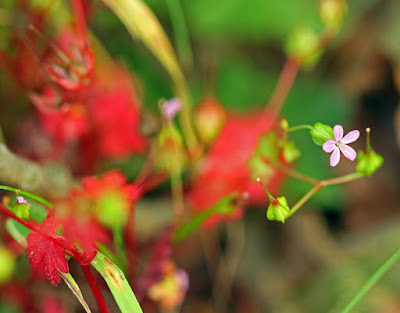 Also in the verge were hundreds of Shining Cranesbills, their inflated calyx (bit under the petals)  distinctive.

Also, as they age, their foliage turns from bright green to  stunning red as shown.

Herb Robert foliage can do the same and look similar, so check the flowers for the inflated calyx to be sure.

In the gloom of the Beech trees I found what I was looking for here, a Birds Nest Orchid. These lack chlorophyll and have a nutritional relationship with the Beech trees they usually grow under. 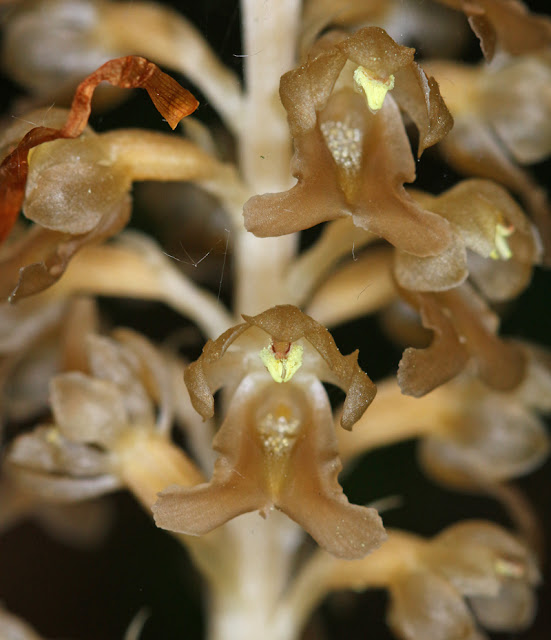 In previous years there have been around 100 or so flowering spikes, today I found just this one, another result of the Spring drought perhaps? I don't know really.  Drawing nutrients from the tree, does it matter if it's a dry Spring for this plant? 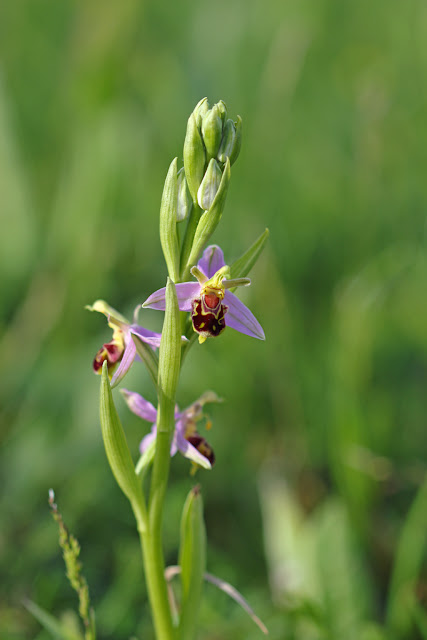 From here we thought we'd go to Sandwich to see if any Lizard Orchids would be flowering, though it was still a bit early for them.

On the way I spotted this Bee Orchid on a busy roundabout, so stopped, walked back and photographed it.

Isn't is nice when councils aren't mower happy all the time! 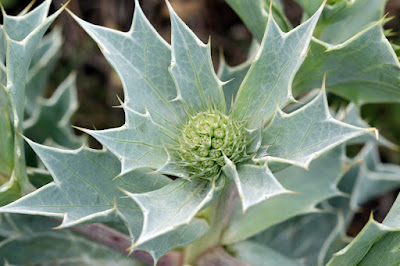 Once at Sandwich, we parked on the road by the dunes. There is a hefty toll to use this road, so be warned!

Sea Holly was about to flower, when it's out, this will have a ball of bright blue tiny flowers. 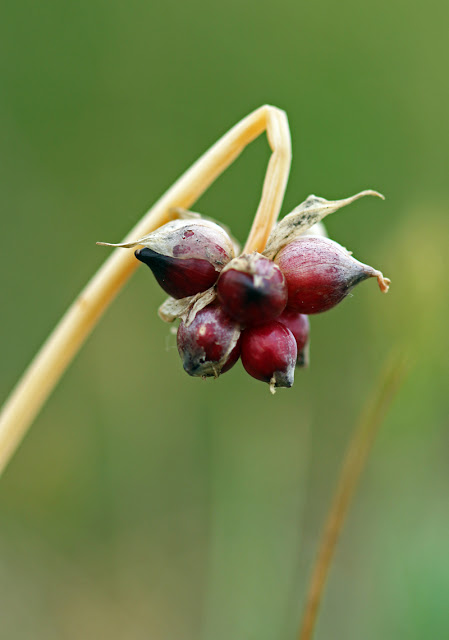 By the road were numerous Rosy Garlic in seed, with their bubils about to drop.


The first of the Sea Sandwort was flowering, these can carpet the dunes and shingle with mats of their oddly shaped pyramid stacked leaves. 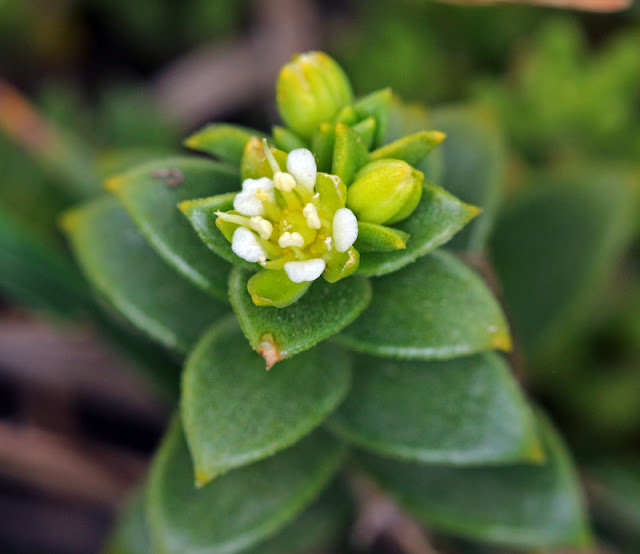 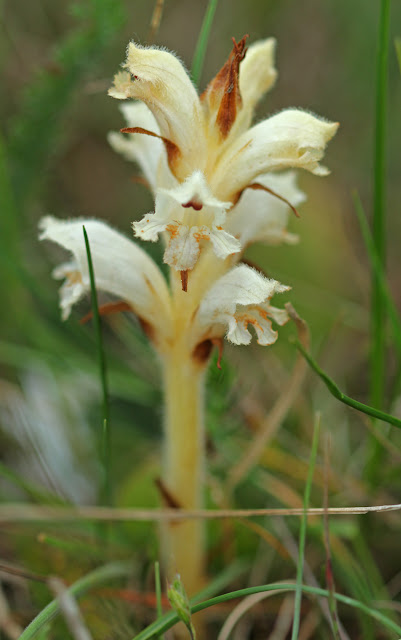 We then found numerous Bedstraw Broomrapes, only found at Sandwich in the UK, a speciality of this place.

It's parasitical on Bedstraws, in particular Lady's and Hedge Bedstraw at this venue.


It's often white or tinged pink. 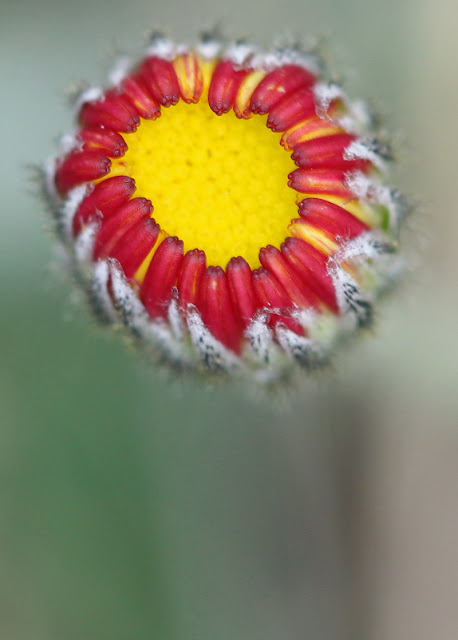 This is a very common plant, it's a Mouse-ear Hawkweed about to flower.

I was drawn to it by the bright colours in the grasses here.

When the flower opens it's basically a pale lemon coloured Dandelion type flower. 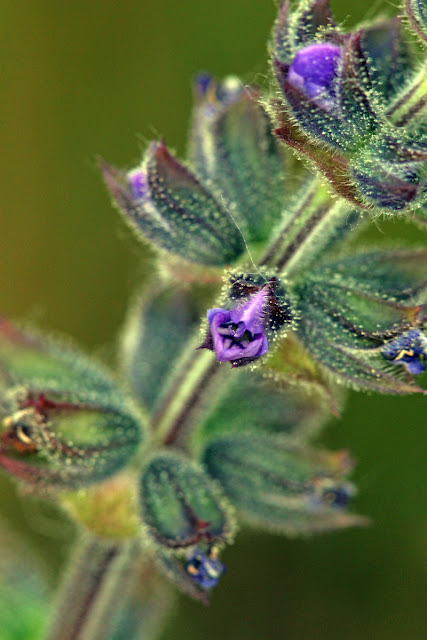 Wild Clary was plentiful with their tiny but eye catching glandular flowers glinting in the seaside sunlight. 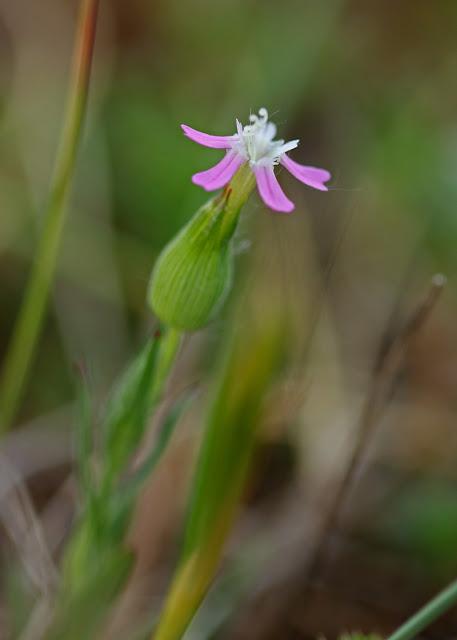 Dotted here and there were the tiny pink flowers of the Sand Catchfly.

The whole plant is usually only about 2" tall so it's easy to miss!

Even these tiny plants were bobbing about in the sea breeze and being very small my depth of field was miniscule.  One day I'll get a decent photograph of it - or take up image stacking! 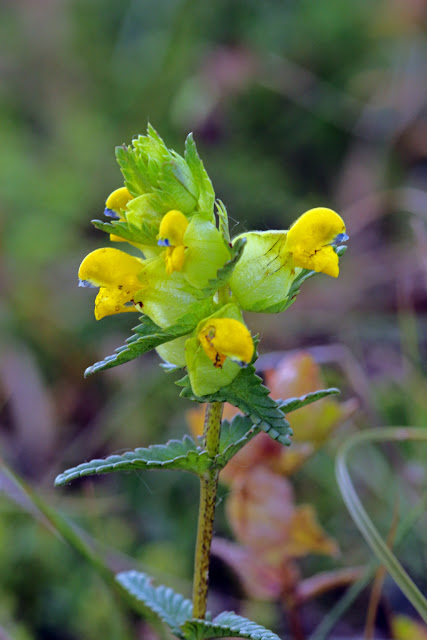 One of the reasons for such a diversity of plants was the presence of this plant - Yllow Rattle. It parasitises grasses and weakens them allowing other plants a chance to thrive.

There was also lots of Red Bartsia coming up, another parasitical plant on grasses to help things along.


Bur Medick was present, a tiny hairy Clover that I recently found at Littlestone as well. It's predominantly a coastal plant and is quite rare in Kent. 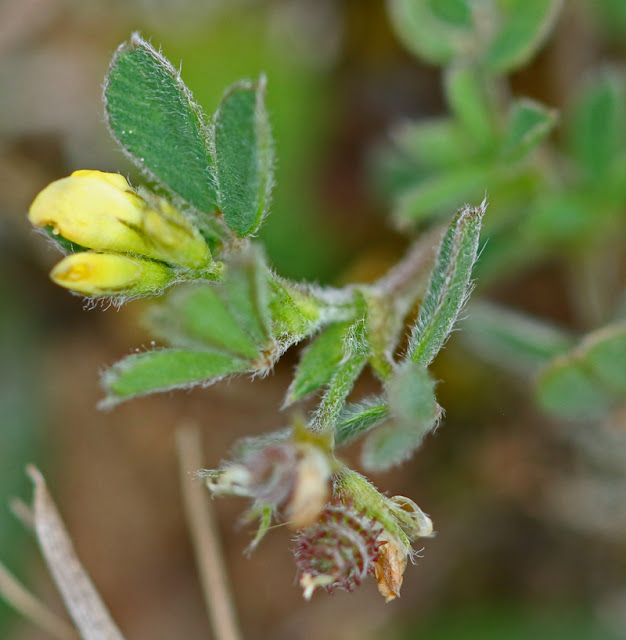 But back to the reaosn for coming to Sandwich, Lizard Orchids.
This is home to hundreds of them, all along the coast road on both verges, on a golf course, on people's garden lawns and along residential roads. It really does like it here.

With such a huge population I was hopeful I might find one flowering. 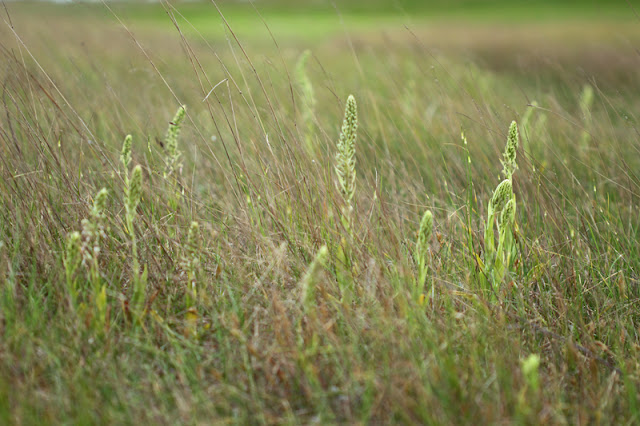 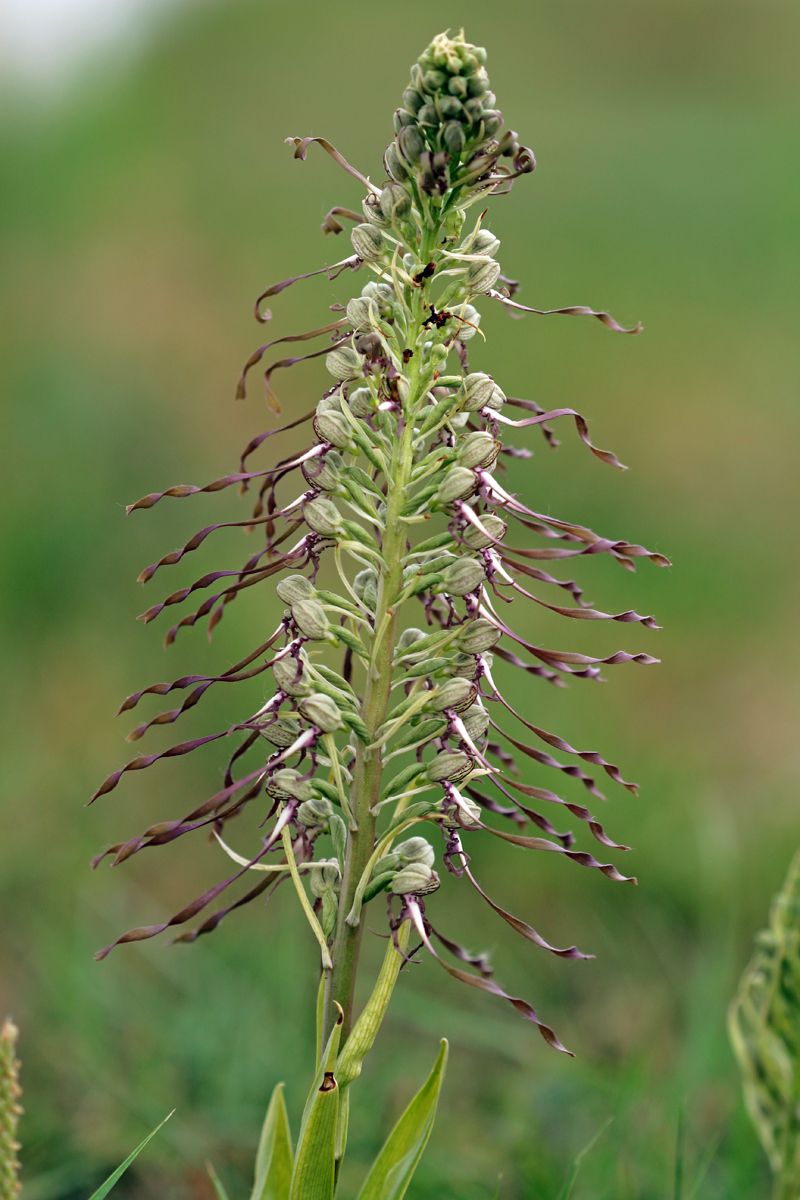 This beautiful specimen was on a short grass verge of a residential street on the Sandwich estate, in full flower, amazing! 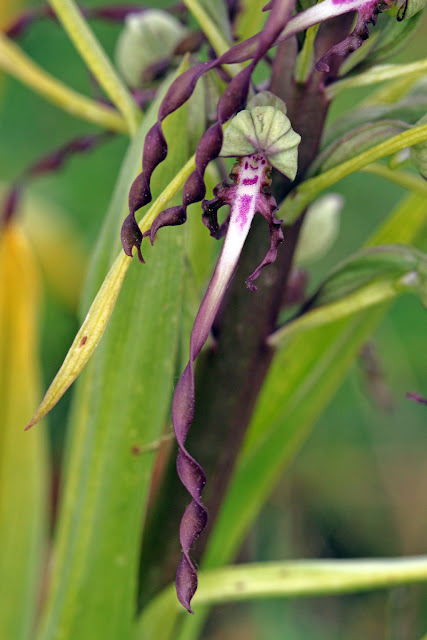 To finish off this wonderful day out, here's a close up of the Lizard Orchid flower.

They seem to be spreading further North and West now, possibly due to a warming climate, so there may be some near you.


I hope you enjoyed this blog,
take care,