- October 22, 2017
Given the length of time now elapsed my blogs are now, I suppose, somewhat historical! With Autumn well upon us following Storm Ophelia and Storm Brian, it seems rather odd writing about botanical finds from August.

However, it's often the case with botanistss that May to September can be manic, with every piece of spare time devoted to finding species, or in my case, recrding as many species as possible in as much of Kent as possible. This left little time to write up my blogs.

I've recently had a shoulder operation, so I can't get out  much until I heal. Hopefully, I will catch up now with my blogs, I hope you enjoy them.

This blog will show some lovely plants I found at Kingsdown Ranges, in East Kent, a delightful area below the white cliffs, South of Deal. 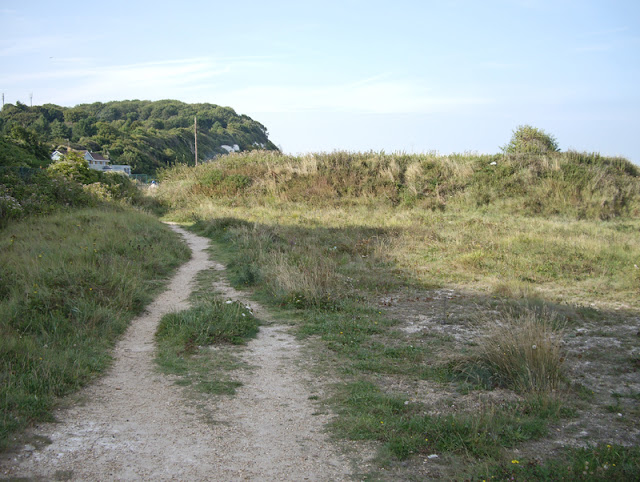 The sea wall here is old and has been breached in several areas. this has led to a small strip of salt marsh, unusually about 10 feet above the high tide mark.  The waves hit the wall and spray washes over onto the land enabling salt marsh plants a niche environment.


Another salt marsh plant was this Sea Purslane. 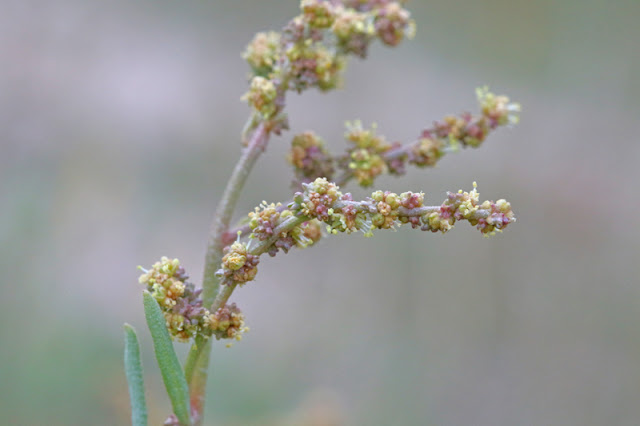 Rock Samphire can tolerate salt but it also likes growing out of tiny cracks in the chalk cliffs as well. 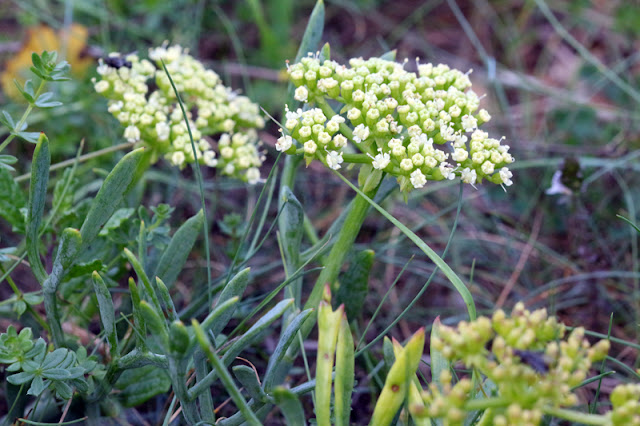 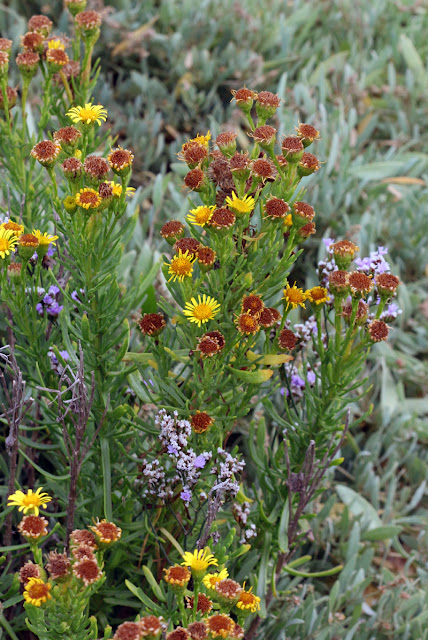 Here's Golden Samphire,  Kent RPR species, rare on the coast like here, but more commonly found along the Thames estuary. 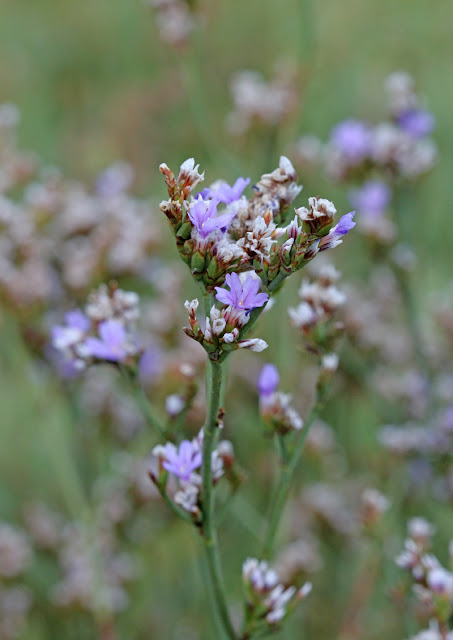 The purple flower in the photo above is the same as that here and below.

Usually in Kent it would be Common Sea-lavender, but here the rarer Rock Sea-lavender was to be found.

I had also found it recently in nearby St Margarets at Cliffe.  It's common in the West of the UK but much harder to find in the South East. 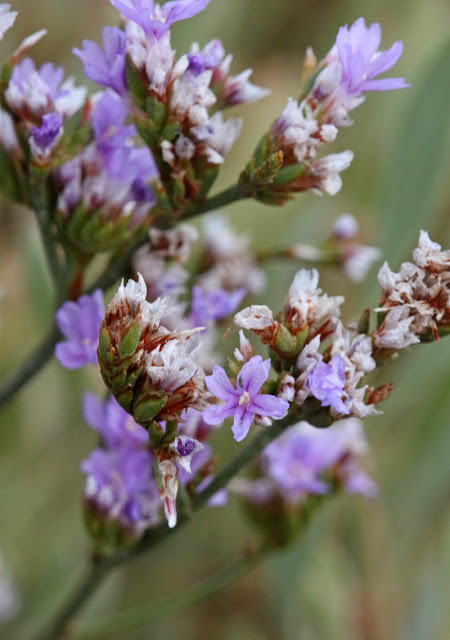 Sea Mayweed was the last salt loving plant I photographed here, though many other species were present, such as Glassworts. It's fleshy leaves distinguishing it from the very common Scentless Mayweed which does not tolerate salt. 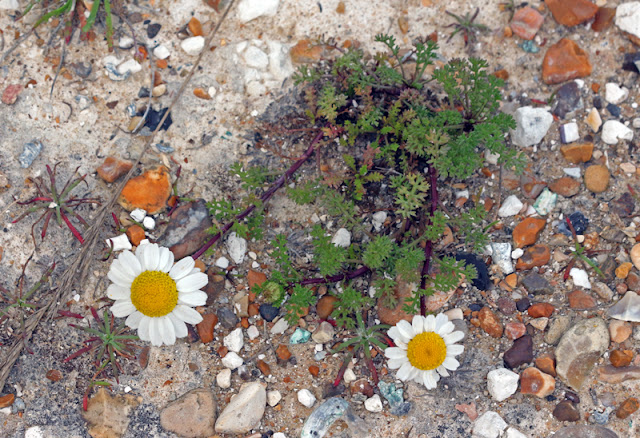 Away from the salt spray area were plenty of other plants to interest me.
This dead looking brown plant is actually a thistle. Look closer and you'll see tiny purple flowers within it. It's another Kent RPR species mostly found on chalk grassland or coastal areas such as here and Dungeness. 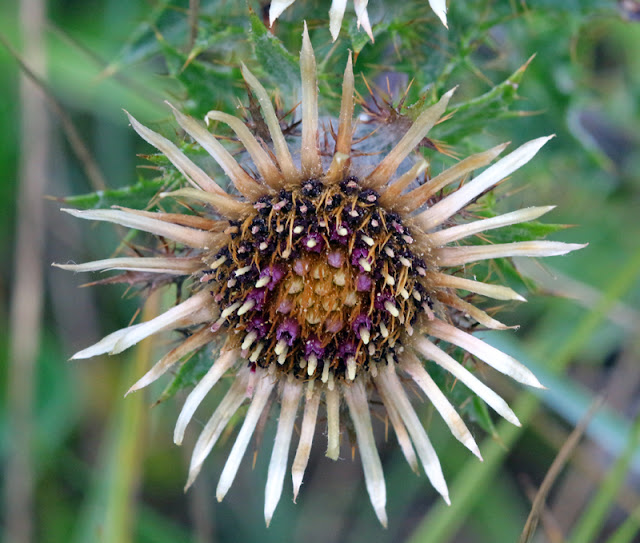 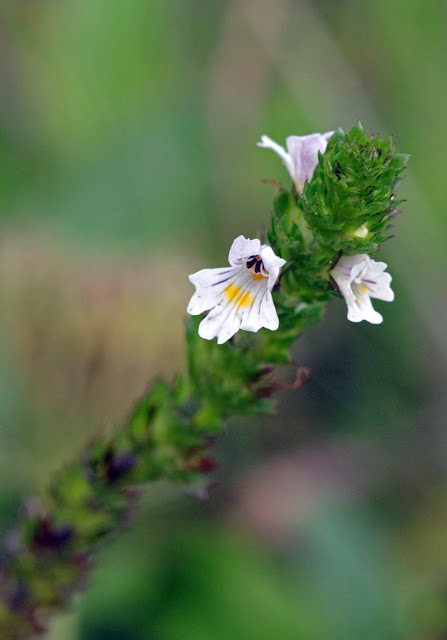 Eyebrights were numerous in the short turf areas. I don't have the eyes or patience to sort out which species this is. Perhaps one day I'll sort out some decent magnifiers that my eyes will actually work with to firmly identify them.


These are semi parasitic on other plants such as grasses and are a good indicator that the area they are found in will be species rich. 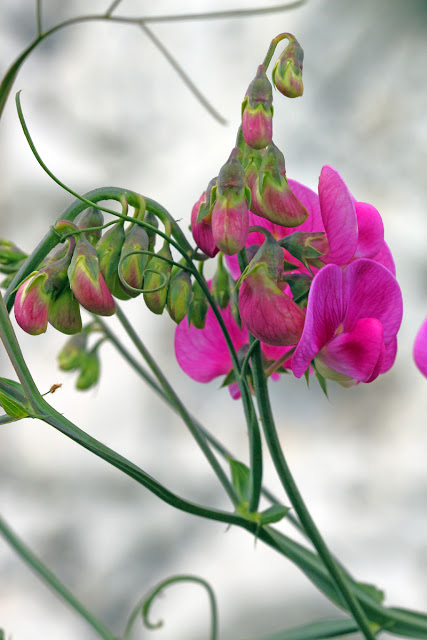 You can't fail to spot this very large plant from the pea family. 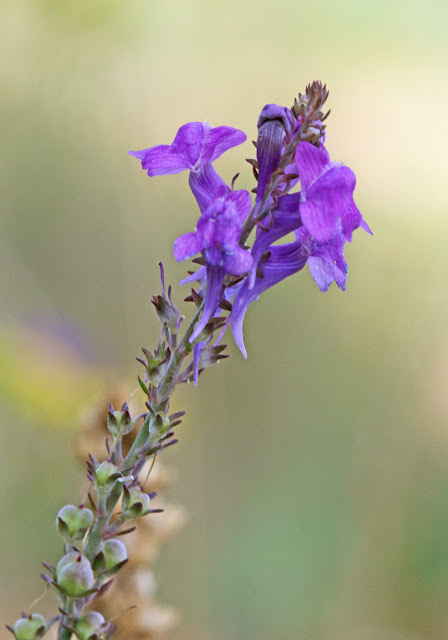 Purple Toadflax was also numerous here. Its seeds spread easily and I have had it growing from wild in my garden plant pots for many years. It's a tall stately plant with bright purple flowers, though it can be found with white or pink flowers occassionally.

Another plant usually found in coastal areas is Narrow-leaved Trefoil. It has much longer than wide narrow leaves and looks quite different to the usual Common Birdsfoot Trefoil found inland. 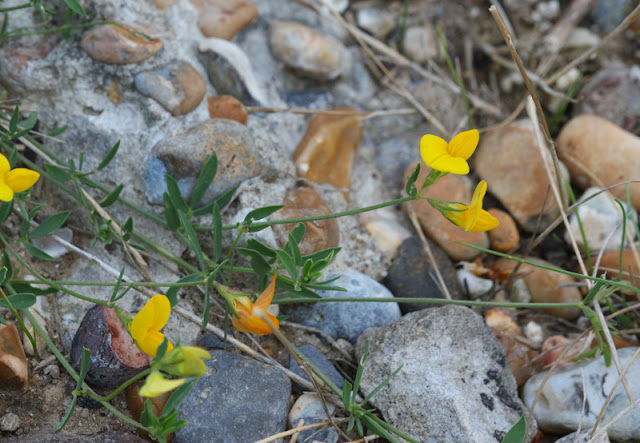 Another pea family plant was this Ribbed Melilot. It looks almost identical to Tall Melilot at first glance, though there are subtle differences to the length of the petal. The easiest way to tell them apart is by examining a seed. 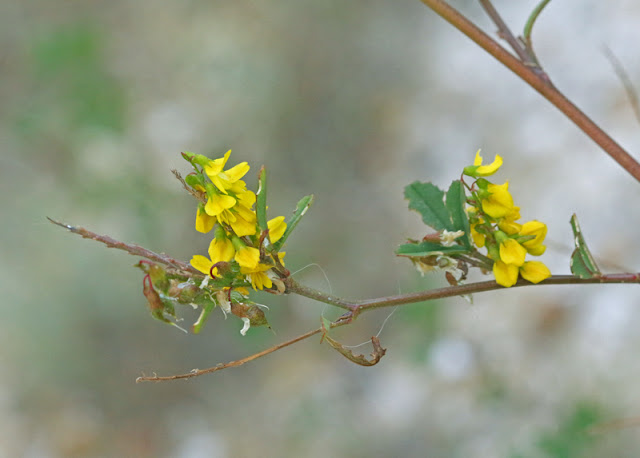 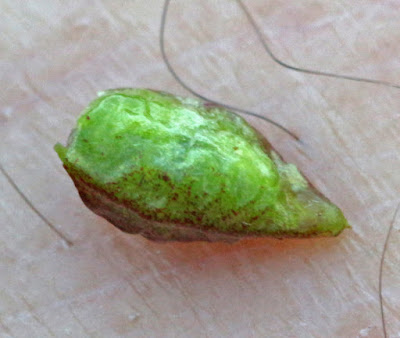 Which is what I did. The seed shows ridges but importantly is hairless.

There were several butterflies around but this Small Copper was all I could creep up on to photograph. This area is often worth a look for rare migrant butterflies like the Long-tailed Blue after Southerly winds. 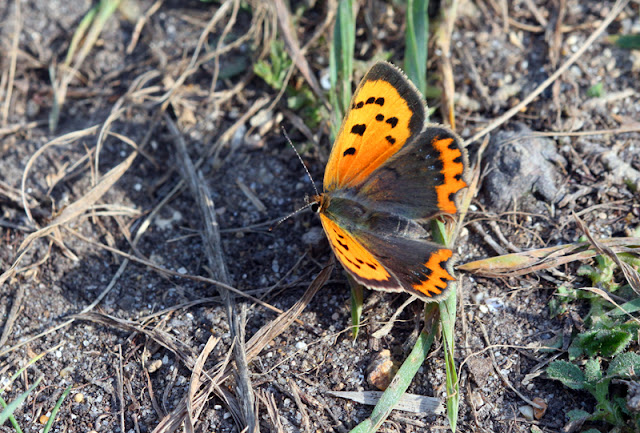 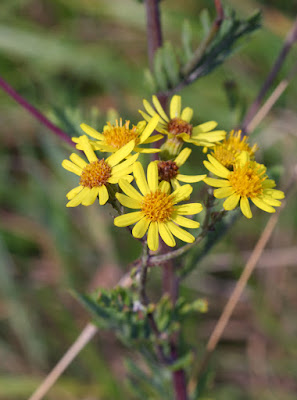 From late Summer onwards, the most common Ragwort in flower is the Hoary Ragwort as here.
Its flowers are well developed and well separated. 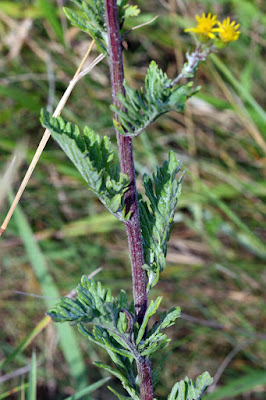 It's easily differentiated from Common Ragwort by its leaf arrangement as shown here. #they often curl inwards as well. Though it's supposed to be woolly hairy it often isn't. But Common Ragwort leaves do not look like this and neither do the other Ragworts like Oxford and Fine-leaved. 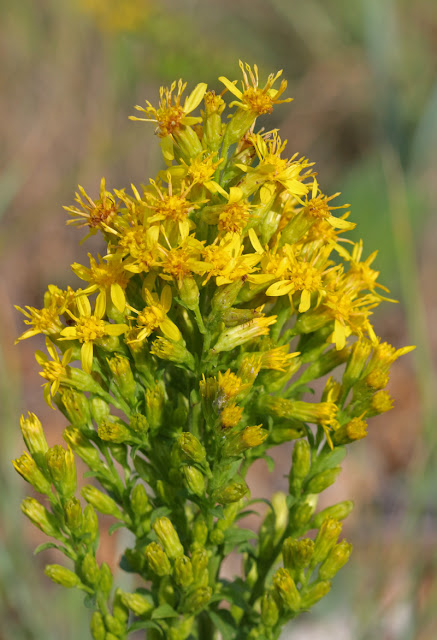 This plant is often found on the coast, it is Goldenrod, another RPR species for Kent.

A few years back I thought it was only found in slightly acidic woodland paths and road verges, but I've seen many more now on beaches both here and in Wales.

It's leaves are not like Ragwort which the flowers could be confused with from a distance and also the flowers are very untidy and ragged looking.

A nice plant to find was this Strawberry Clover (in seed and Kent RPR), another coastal plant though not in salty areas. 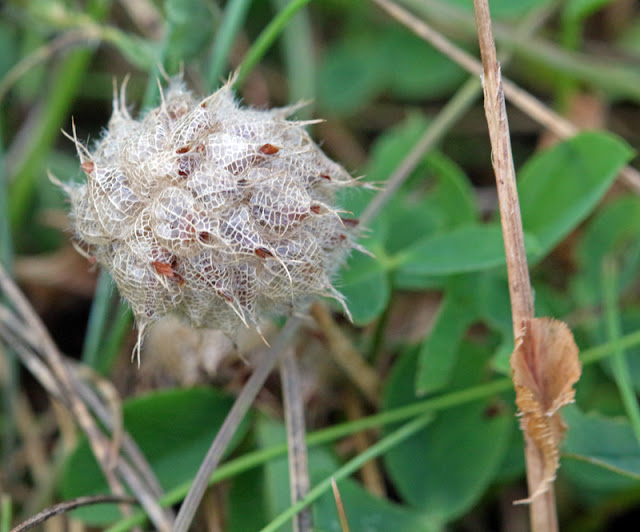 Of course, I've saved the best to last. This is Autumn Ladies Tresses, the last Kent wild orchid to flower for this year. Here's a photo showing its tiny white flower spikes in species rich turf. 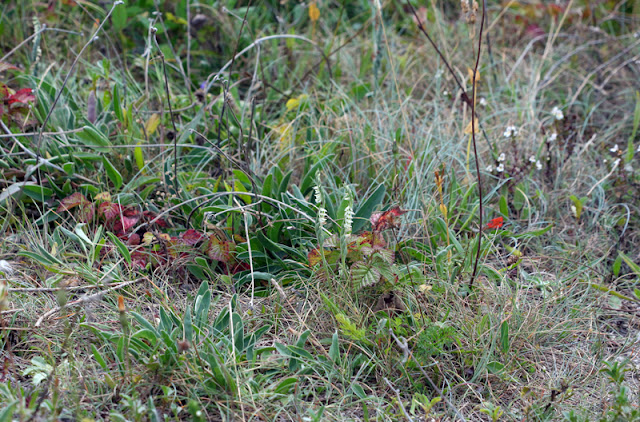 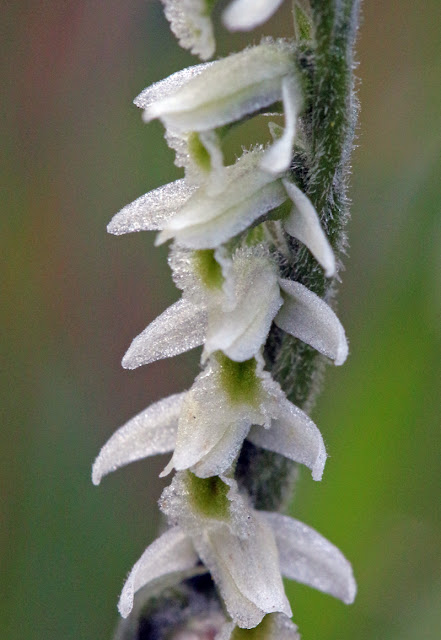 A macro shot of its tiny white and green flowers. 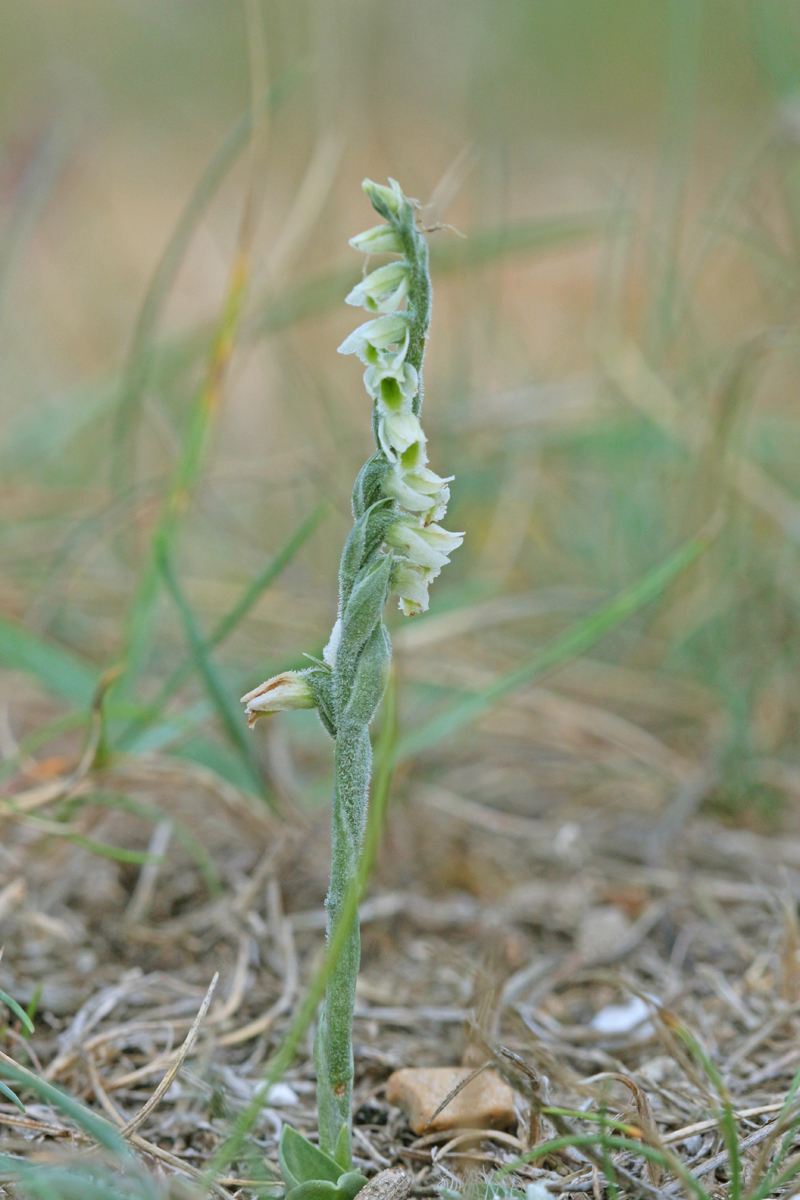 This is an amazingly rich area for botany and wildlife and I recommend a visit if in the area. Other rarities such as Oxtongue Broomrape grow here as well in season. 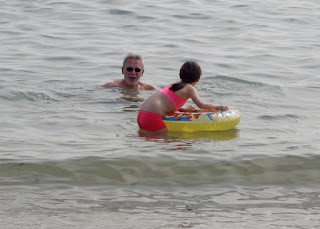 And here's what I did with the rest of the afternoon with my Grand Daughter. Seems so long ago now, though I expect the sea would still feel warm, even now in mid October.