- October 31, 2017
Shorne Woods is within Shorne Country Park and I was most surprised to find that a large part of it had not been botanically surveyed. As such, I set off the short distance for a walk around the area. There are two well known rare plants here which were well documented and that I saw a month ago here as well.

The first is Greater Bladderwort, an aquatic plant with lovely yellow flowers popping up above the water surface. However, under water, the stems have vacuum filled bladders. When a passing small insect (such as mosquito larvae or daphnia) touches it, it implodes, sucking in the nearby insect with ease. 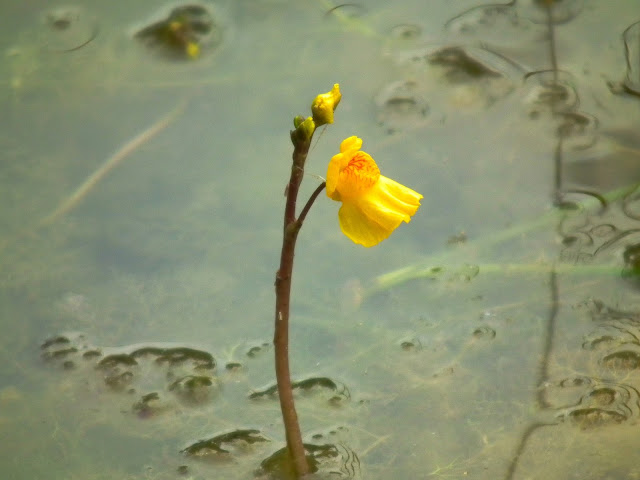 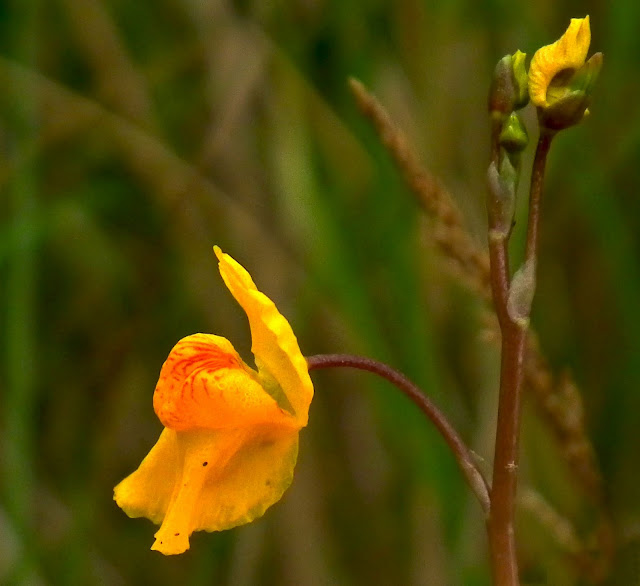 The second rarity known here is the beautiful Violet Helleborine which grows in a few places on shady paths under the Beech trees. 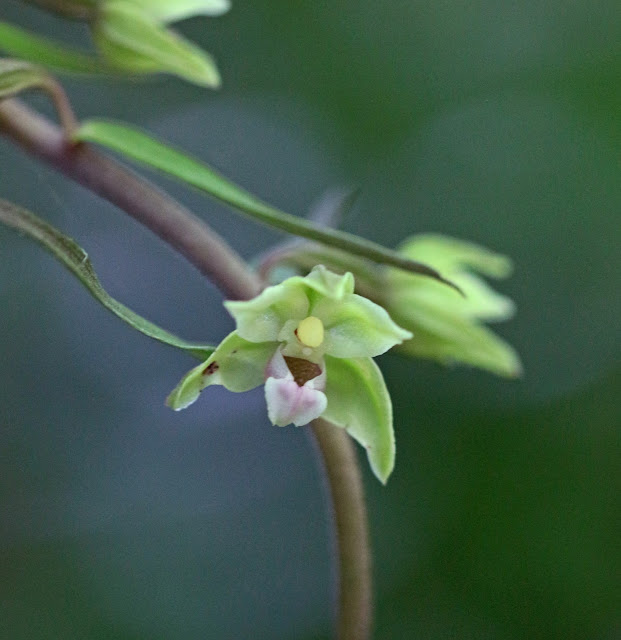 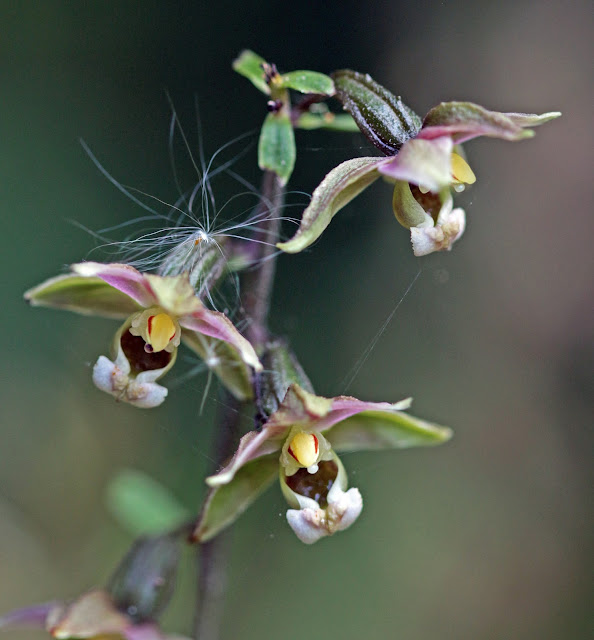 Given that these rare species thrive here, I was puzzled why the area hadn't been properly recorded before. The following plants are some of those I photographed on my walk here, recording 121 new records, though some of those in the photos had been recorded before, but the flowers demanded a photo!

First up was the humble Yarrow. In late Summer into Autumn, it is a very common sight in lawns, grass verges, heaths and commons, their white flowers shining in the sun. However, I found a couple of plants with a wonderful shade of pink in their florets, beautiful! 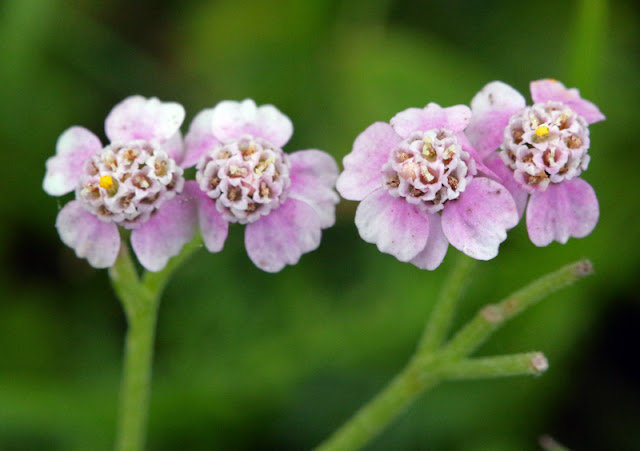 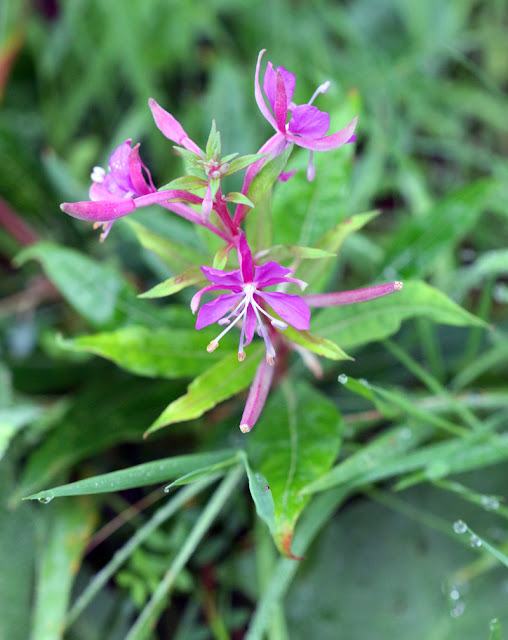 There were tall, stately stands of pink along the woodland rides (paths) of Rosebay Willowherb.


If you don't habitually look at small plants on the ground, you are likely to miss the next flower. You might catch a glimpse of pink. Look closer and you'll see Common Storksbill, often found on well trodden paths with tiny rosettes of leaves around them. 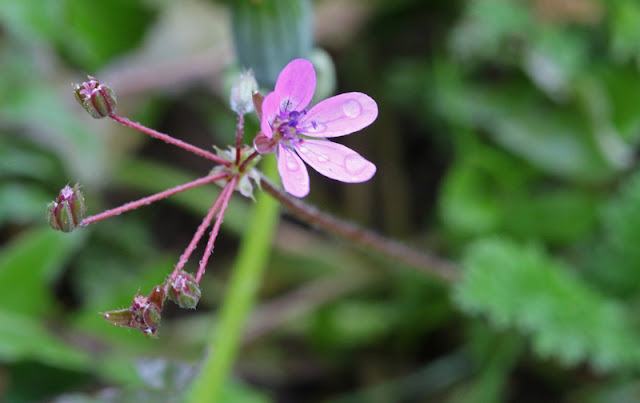 Another smll pink flower is Long-stalked Cranesbill. I don't often see these, with Cut-leaved Cranesbill being the commoner species with similar leaves. Other similar plants you are likely to find are Dovesfoot and Round-leaved Cranesbills as well. 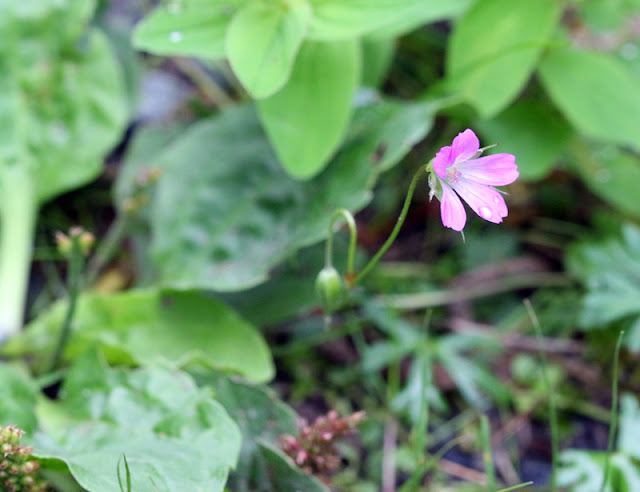 Another common plant in woodland around North Kent is the Yellow Pimpernel. It has a bigger flower than Scarlet Pimpernel and is found in the semi damp shady areas of woodland paths. 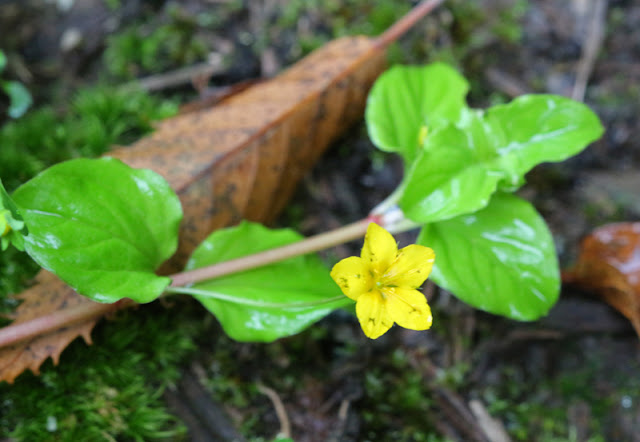 Just outside the woods in a grazed field that had been left without livestock for a couple of weeks was a fine stand of Wild Radish. 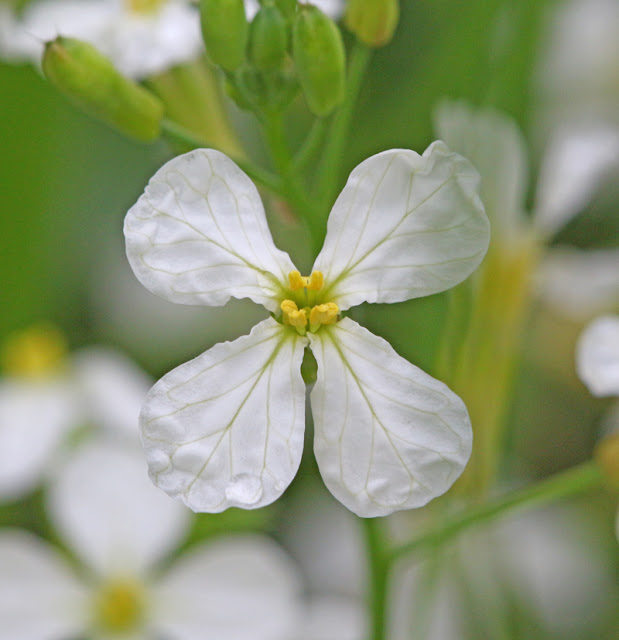 Unusually there were also yellow flowered variants within the swarm of plants. Yellow radish flowers are usually Sea Radish, but the inland wild radish can also be yellow or pink or a combination of colours. 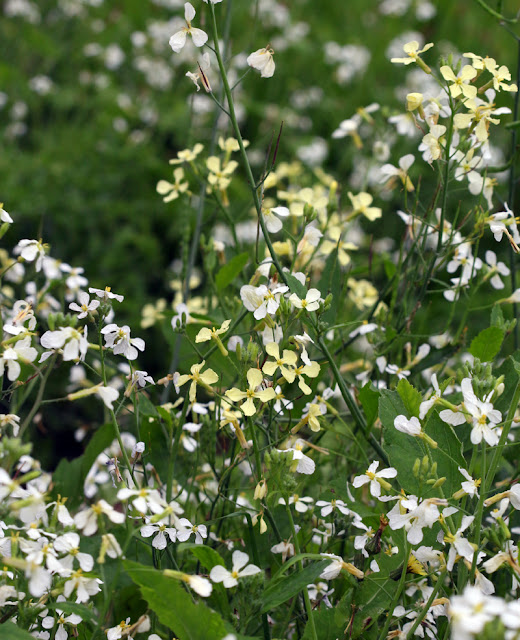 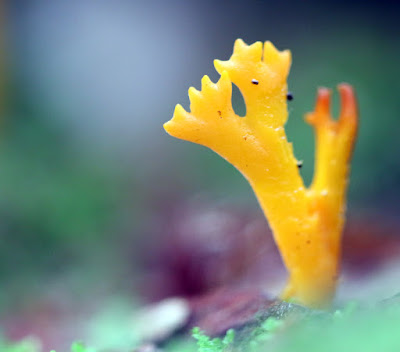 Fungi at this time of year are often a welcome distraction. I believe this is Yellow Stagshorn. 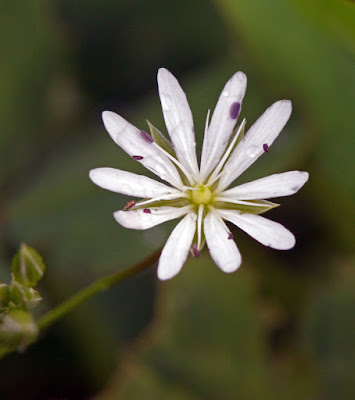 Lesser Stitchwort was also in the grassy field, weaving its spindly stems in and around the grass stems, dotting the meadow with its snow white flowers and purple anthers. 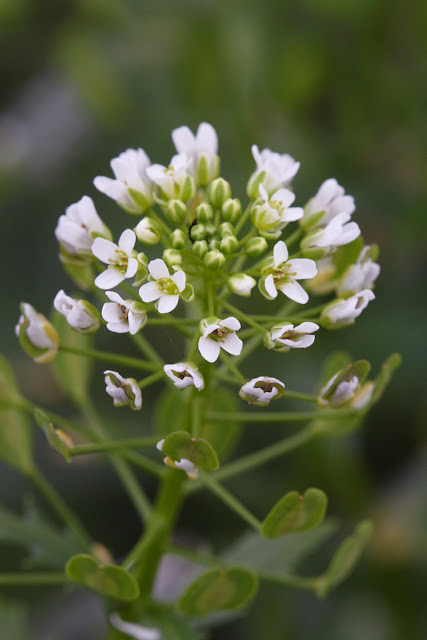 Field Pennycress when in flower looks a bit similar to Shepherds Purse with a head of rather small, inoccuous white crucifer flowers.


However, when seeds are present, there is no mistaking it, the big flattened coin shaped pods giving the plant its common name. Ironically, in the photo below, a Shepherd's Purse is photobombing the composition! 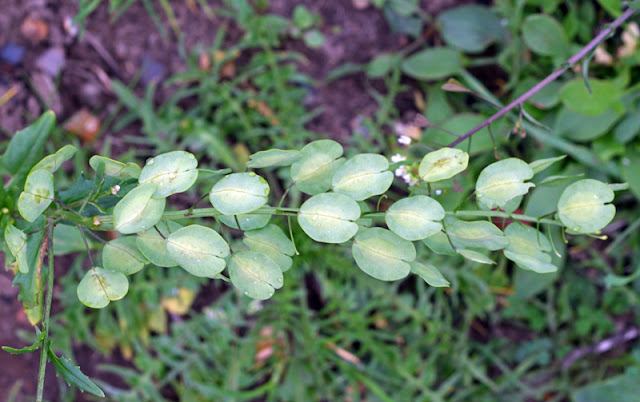 In the grasses were the numerous bright blue flowers of Germander Speedwell, on its second flowering of the year now. It can easily be identified without flowers as well, due to most stems having 2 parallel lines of hairs running along them. 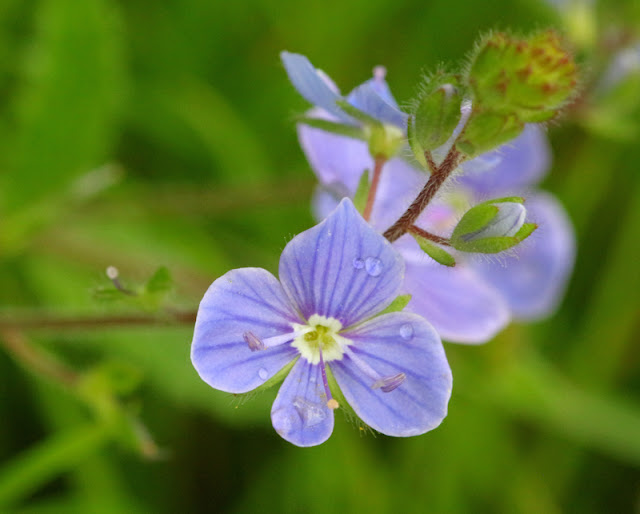 Back in the woods and I found another Speedwell in flower, this time a Kent RPR species, the Heath Speedwell. This has oval toothed leaves with a raceme or spike of flowers rising up from them. 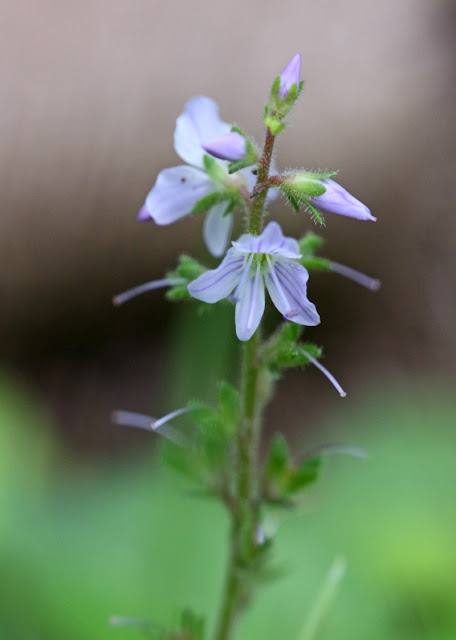 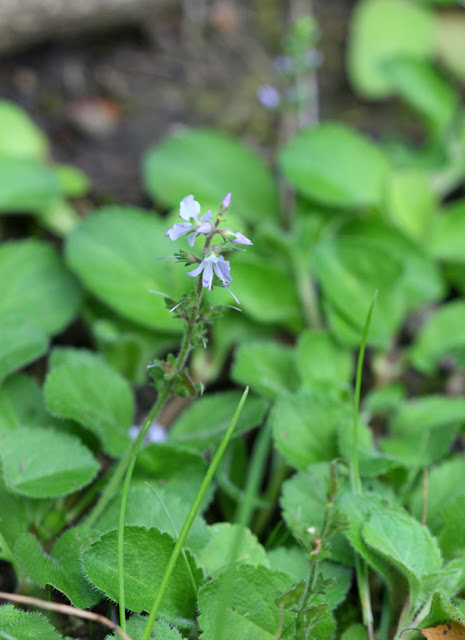 Bush Vetch often flowers into Winter or until the first severe frosts kills them off. As the name suggests it can be found in bushes, hedgerows and path verges as here.  It's purple to lilac petals turn blue as they age. 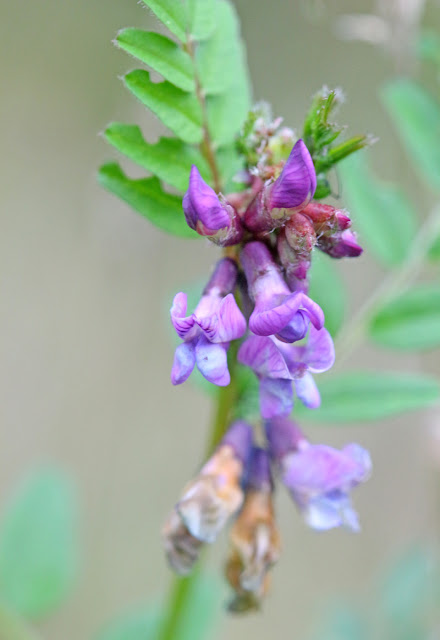 The final flower I photographed was a pleasant surprise and a reminder of Spring, the common Dog Violet. I first saw these flowering in September a few years back, looked them up in my books and found this species often puts up a few Autumn flowers as well. Since this trip I have seen hundreds in flower, the most numerous being in places where light has been allowed back to the woodland floor from coppicing. 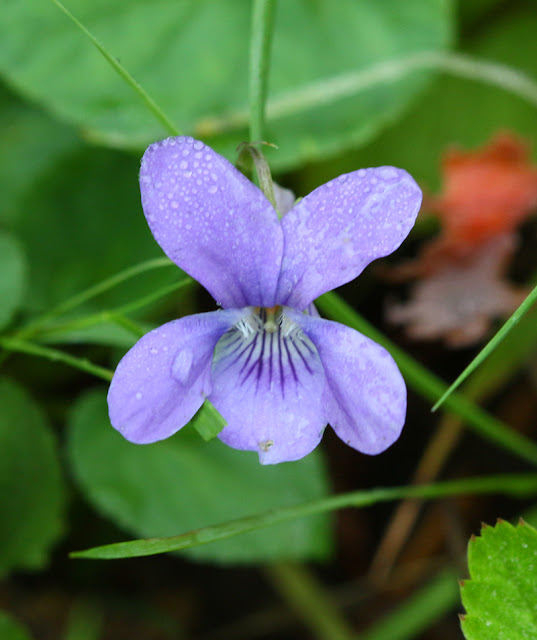 So ended a very enjoyable walk and a productive one at that. Just because a venue is a nature reserve or country park, don't assume someone has alrady recorded what is present, be it plants, birds, butterflies or insects.