This is the concluding part of my explorations into Cornish botany from last August, scroll down for parts 1 and 2 if you missed them. The blog starts off with a trip to the bog.

Locally called Davidstow Moor, it was a bleak, cold and wet looking place, not helped by me visiting on a wet day in late afternnon with fading light. I knew that Bog Orchids had been found here in the recent past, though I also knew that I was 2-4 weeks too late to see them, but I thought I would have a go at finding one anyway. Needless to say I didn't find any, but I did find some interesting things along the way.
First off was Devil's Bit Scabious, this one with a female Common Blue butterfly on it (I think). 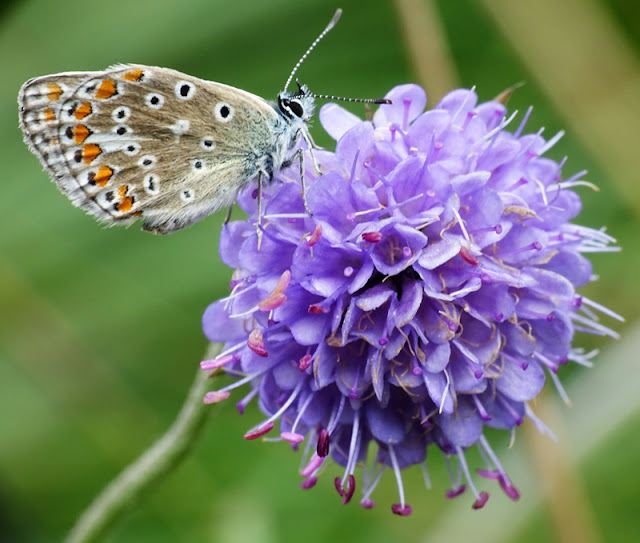 A view from the moor - my feet were sinking as I took this photo. 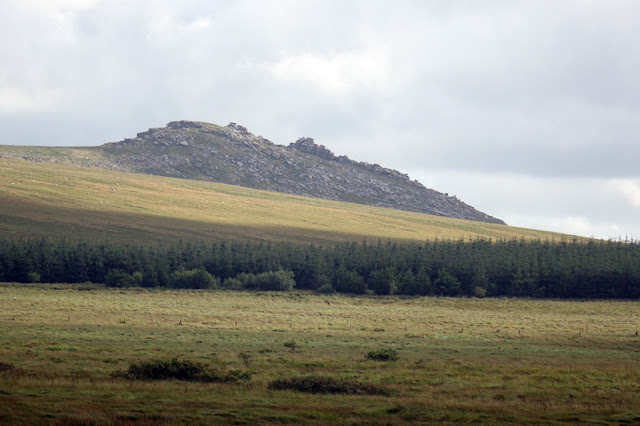 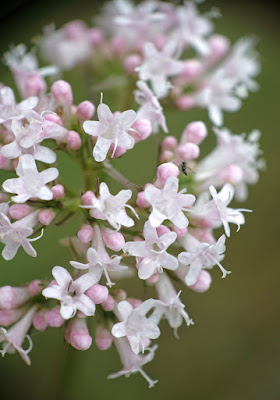 This is a very rare plant in the dry south east, but more common in the wetter west - it's Common Valerian, not to be confused with the very common garden escape, Red Valerian. 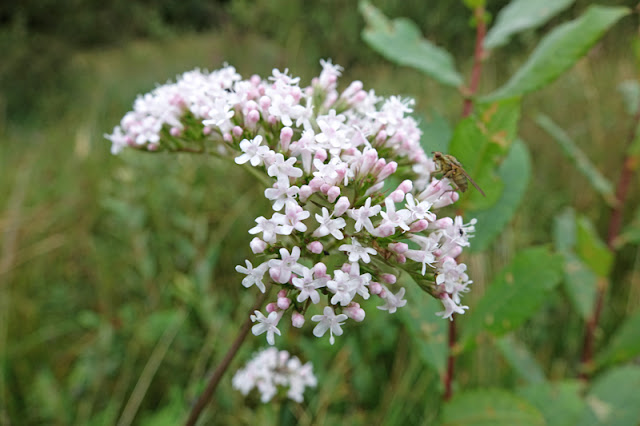 Below is Lousewort, a semi parasite on other plants (though I don't know which ones) that loves boggy ground.
Pedicularis sylvatica 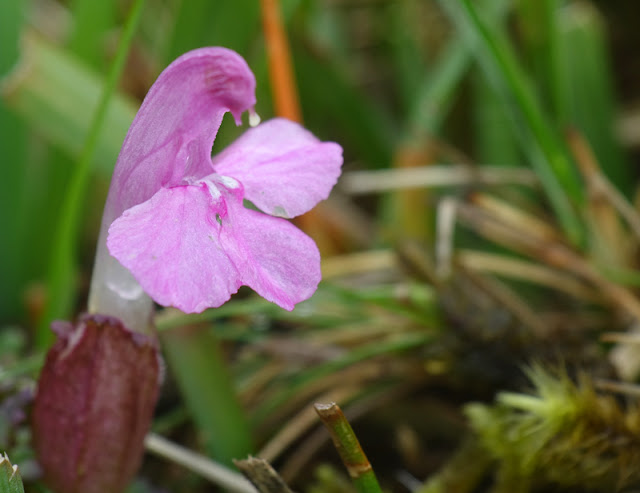 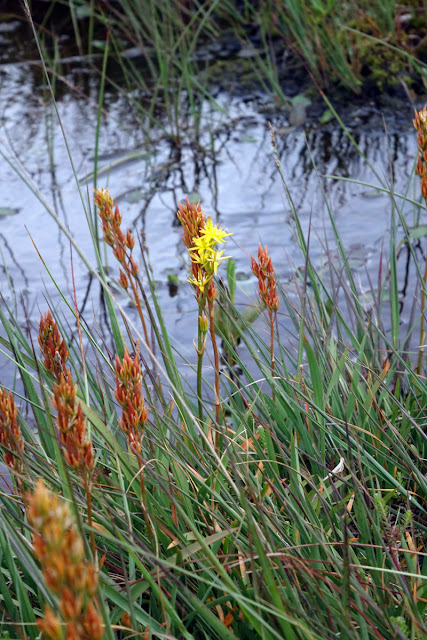 The most beautiful flower of a bog is without doubt, the Bog Asphodel, with its bright yellow flowers turing to shades of orange as it goes to seed.
A few weeks previously and the bog would have been painted with swathes of yellow from these plants. Unfortunately they were almost gone over now and this was the only one I could find with some flowers still out.

I'm amazed I got any photos really as I sank quite quickly if I stayed put for more than a few seconds.

In the photo to the left, there is no ditch or pond, the water is just laying over the soil with nowhere to drain, making it very treacherous to walk on. 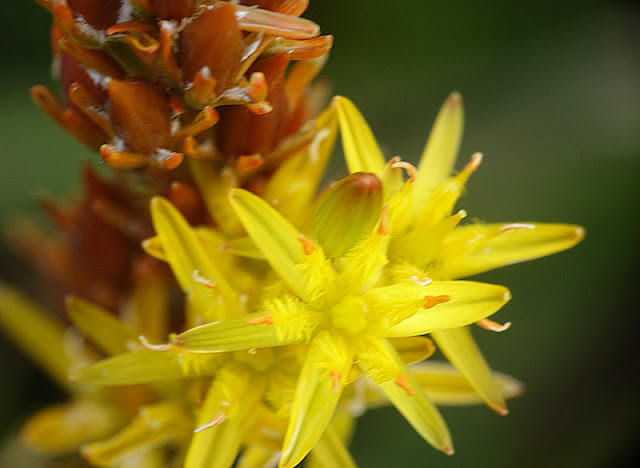 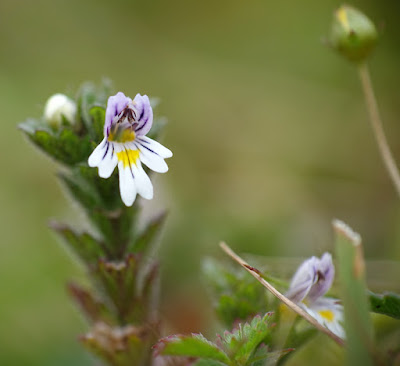 Another semi parasitical plant is Eyebright with its pretty little flowers of white, purple and yellow, often just a couple of inches tall in these extreme conditions.


The low nutrients in the soil led to some plants evolving into semi parasites of other plants. The following plant below took it to the next level and became carnivorous, eating flies and any insect foolish enough to be tempted by the sweet smell (to them) emanating off their gluey blobs  poking out in a circle from the plant. Land on these and they envelop you and fold over to take you to be digested within the plant. This is what has happened here, a fly is being digested within this plant. 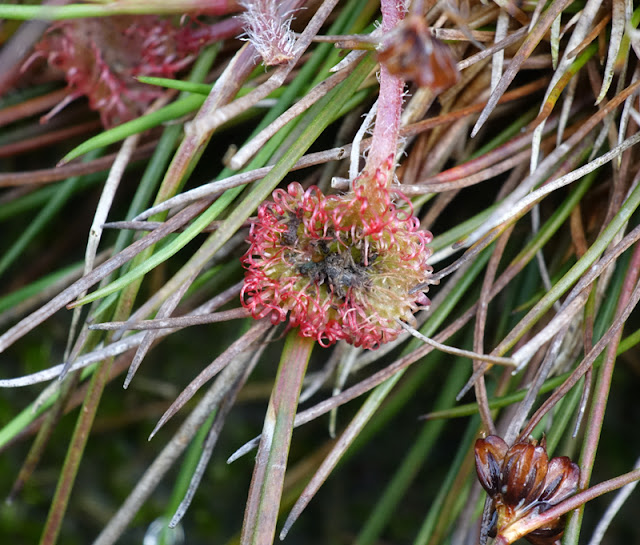 These plants throw up a small pale green flower spike (though no flowers were open this day) and there were hundreds of them around the bog. Of course, these tiny flower spikes were the the same colour and size of any possible Bog Orchid I might find - hence me zoning out eventually and not seeing anything!
Below: primed and ready to catch a fly - Round-leaved Sundew 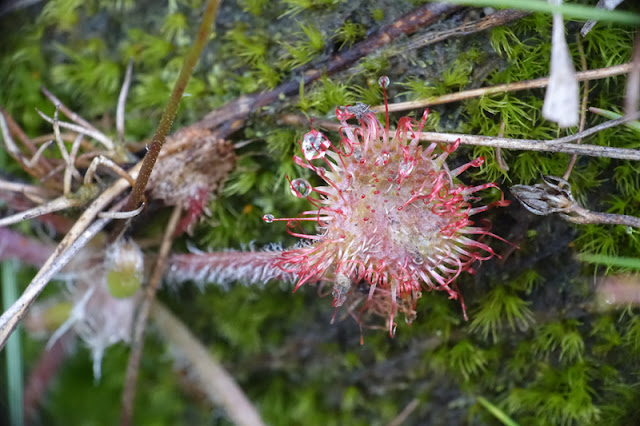 Cross-leaved Heath flashed some bright pink flowers here and there within the drabness of the bog, though most had gone to seed by now.
Erica tetralix 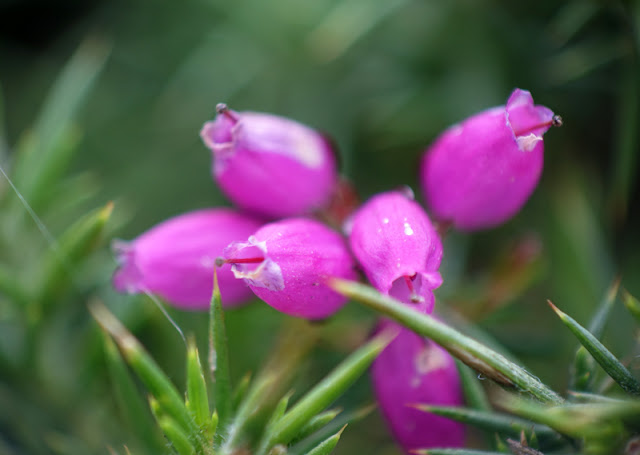 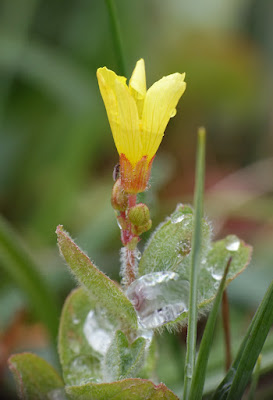 It was now was pouring with rain, but I still managed to photograph these lovely Marsh St John's Wort. Most looked like this one on the left, closed up due to the weather and failing light, but luckily I managed to find one still open (below).

There were also plenty of these in a nearby sheep field and I noted that the sheep ignored them, thus they are either a nasty taste to sheep or they are poisonous to them.  I don't know which applied here, but in relation to most plants, sheep do not take prisoners (they munch on almost everything). 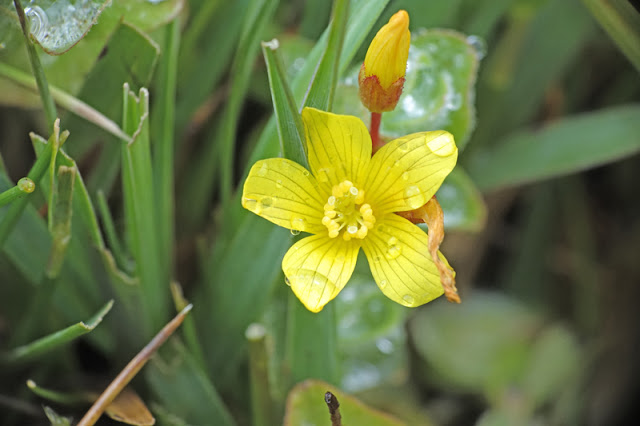 There were some large patches of Corn Mint, but oddly I didn't see any Water Mint, which given how wet the area was, was a surprise.
Mentha arvensis 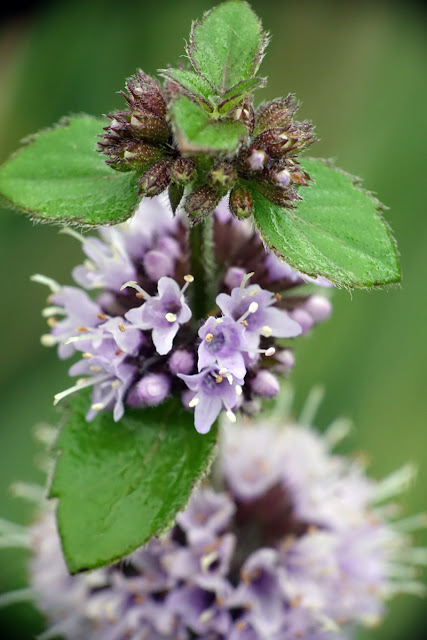 That was it for this bog/moor, though we did have a drive over a part of Bodmin Moor where we saw several of the species shown above along with a few others such as Tormentil.
Potentilla erecta 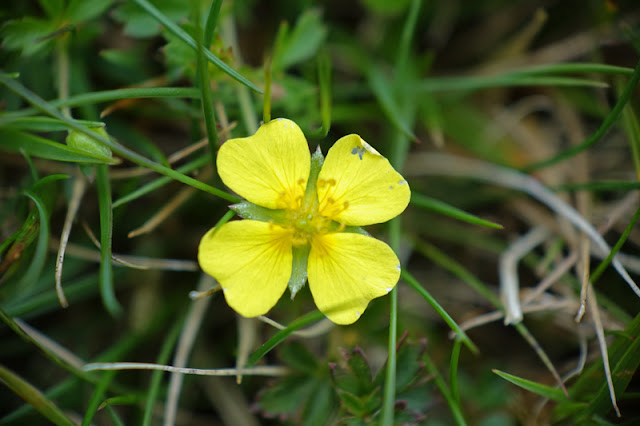 This area had some spooky ruined buildings too. 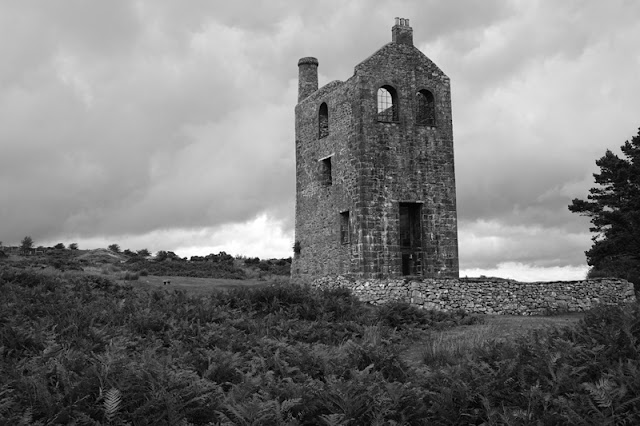 My final instalment was a trip to Tintagel, home to the legendary (but fictitious) King Arthur. It had great scenery, some great plants, but unfortunately it also had crowds of tourists which totally  detracted from the whole experience. This first photograph shows the new bridge connecting the island to the mainland, erected only recently by English Heritage. 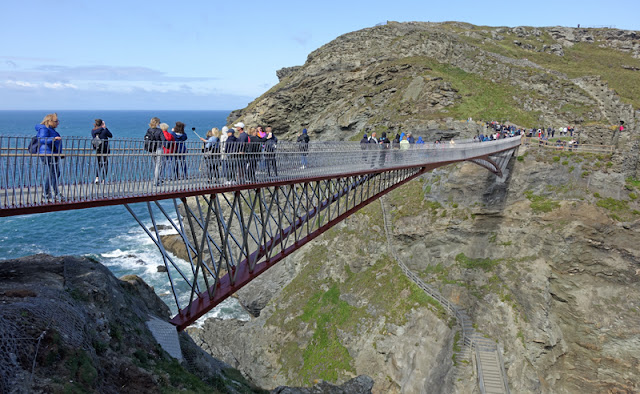 This photo shows the bridge from near the beach below, away from most of the people and where I preferred to be! 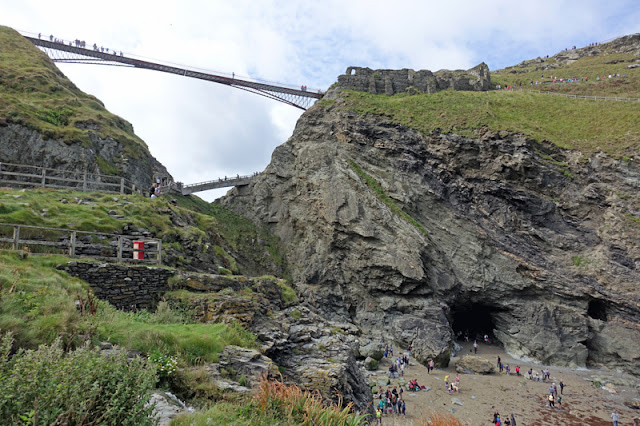 It was here that I noticed an odd looking Woundwort. It was obviously a hybrid, but unfortunately it was behind a cliff fence so I couldn't examine it closely. The flowers were a mixture of Marsh and Hedge Woundwort and the leaves were a mix of stalked and unstalked too. 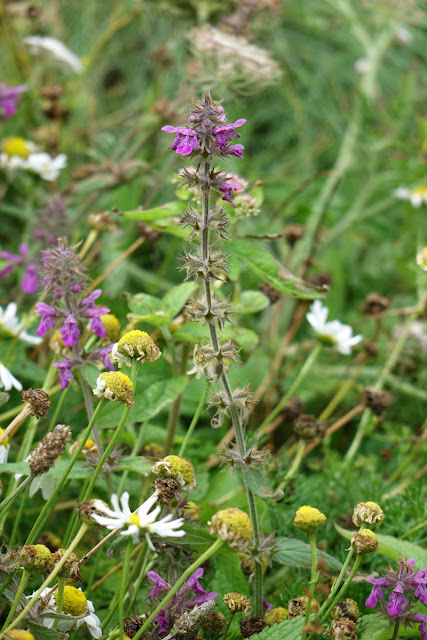 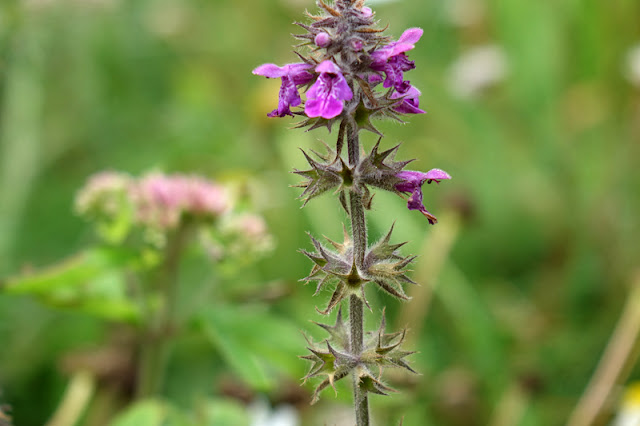 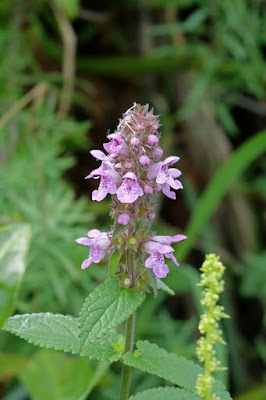 Nearby was one of the parents, a Marsh Woundwort
for comparison.


In the splash zone on the cliffs was some Sea Plantain which I didn't expect to see as it prefers saltmarshes to cliffs in Kent. 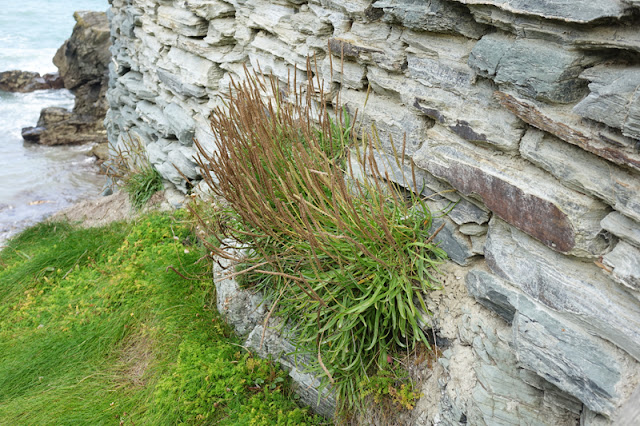 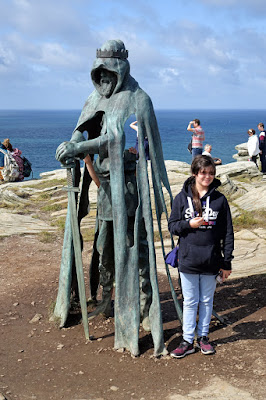 We did find King Arthur eventually!

One of the advantages of taking the grand-daughter with us on holiday is that she thinks nothing of scampering down a cliff to see things and not much more about the arduous climb back up. As such this trait could be used to my advantage....  "Yes Grandad it's Rock Samphire" I think she's saying! 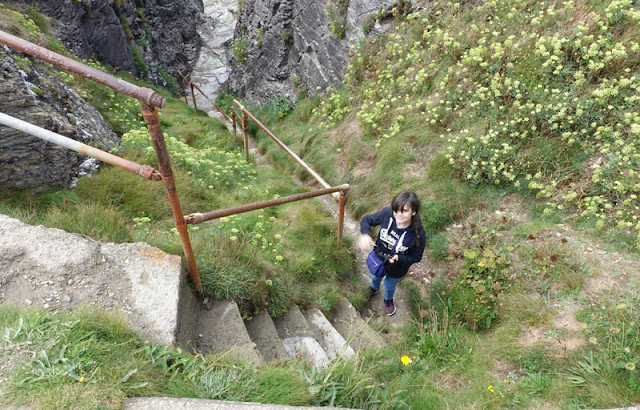 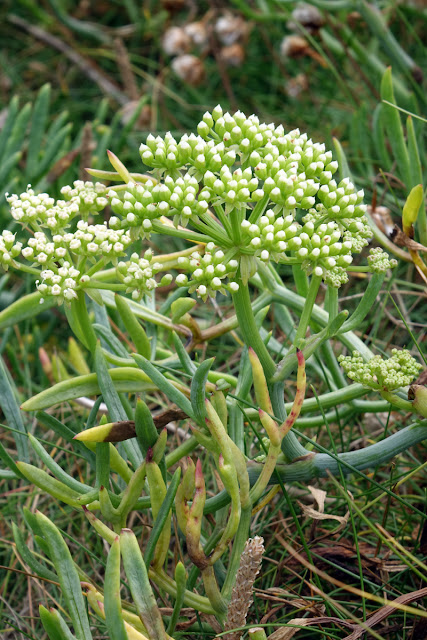 Of course, this took so long that by the time she got back to the top, I found some nearby anyway!

Amazingly she failed to fall off the cliff; slip over and break a leg; get abducted when disappearing around a corner or generally come to catastrophic harm in some other way. I guess the world isn't as bad as people (and health and safety people) think then?

To finish the blog, I have to mention Port Isaac. It's a beautiful small fishing village that still retains its olde worlde charm. It's now famous for hosting the filming of the TV show "Doc Martin" and it was very odd being at the locations one knows from the series. 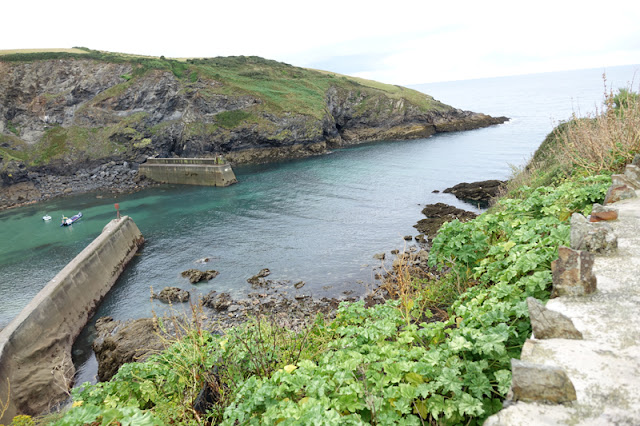 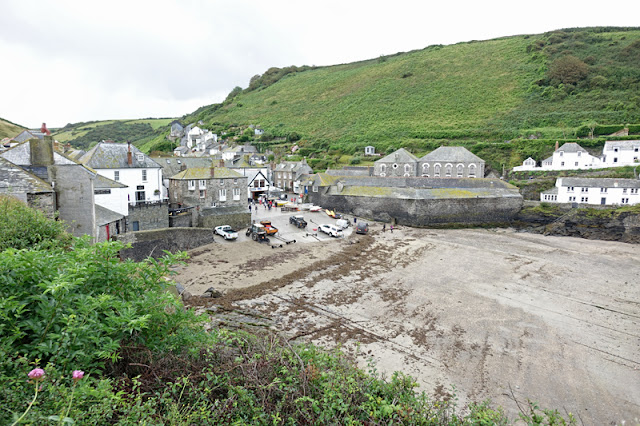