- May 10, 2020
We live in a rented house and as such we are not able to do what we want with the small gardens we have and have to keep them relatively "neat and tidy". This goes completely against what I want from a garden which should have space for wildflowers and nature in general. As such, I bend the rules as much as I can and leave so called weeds to flourish where I can.

As lockdown commenced due to Covid-19 this was a garden safari to keep me occupied and to stop me dying of boredom. Here's what I found: 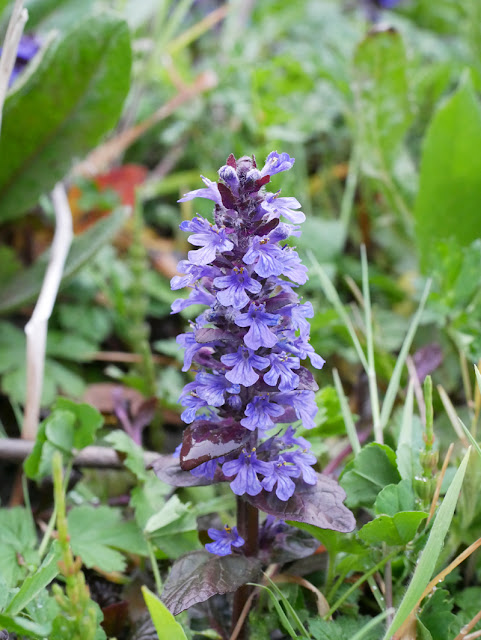 This plant isn't really "wild" though I would describe it as "naturalised".

This is a garden variety of Bugle which has purple coloured leaves unlike the native form. Other than that, it's pretty much the same as a wild one. You can see the coloured up leaves in the photo.

These had spread all over the garden by themselves, away from where planted and one had even come up in a pavement crack.

Unless one is a fanatic from the "neat and tidy" brigade and smothers one's lawn in herbicides you will almost certinly have some of these in your lawn, the humble Daisy. It flowers all year round and is a most under appreciated wildflower.

It was getting dark and had recently rained when I took this, and the petals were folding up to keep the pollen dry. I took the photo as I liked the understated pink hues on the underside of the ray petals, normally hidden from view when the flower is fully open. 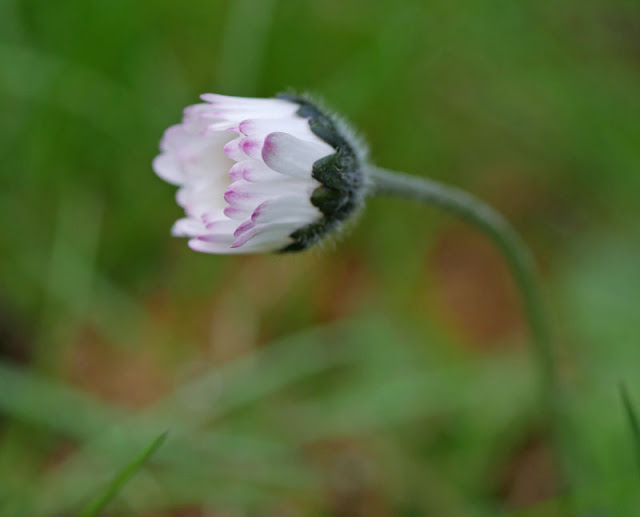 The next plant is a big flowering shrub which has an odd story to it. I don't know what the plant is called but it isn't a native plant. We have been here for several years and each year this shrub put out a small handful of solitary flowers. How then did we get it to flower prolifically like this? Did we pet and pamper it; feed it with Miraclegrow?

Nope, we poisoned it. 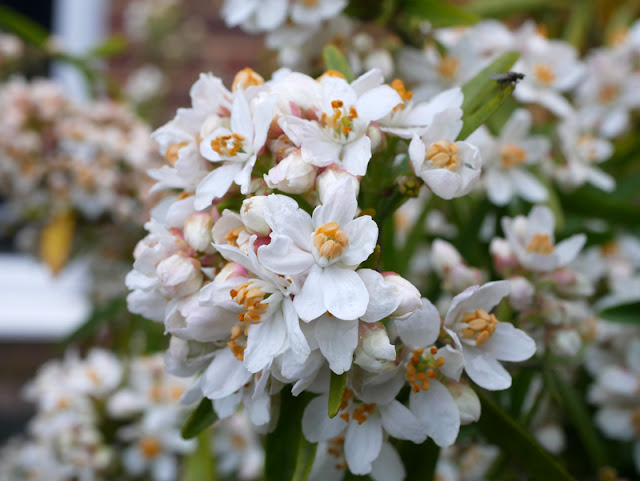 Last Winter we placed a sack of road salt at the base of the plant (it's by the car in the front garden). Unknown to us, this sack was leaching out salt into the ground around the plant. When we noticed the leaves turning brown and dropping off we realised and moved the sack. The plant has now fully recovered but in response to being threatened with death it has put forth hundreds of flowers.
This little story reminded me of how Plantlife drove a tractor over Marsh Clubmoss, a rare plant to help it survive - weird but true, here's a link to read about it if you are interested -

Most people are familiar with Herb Robert. It's found in woodland, shady places and is also a garden and street plant. They are all over my garden in the borders and paving cracks. 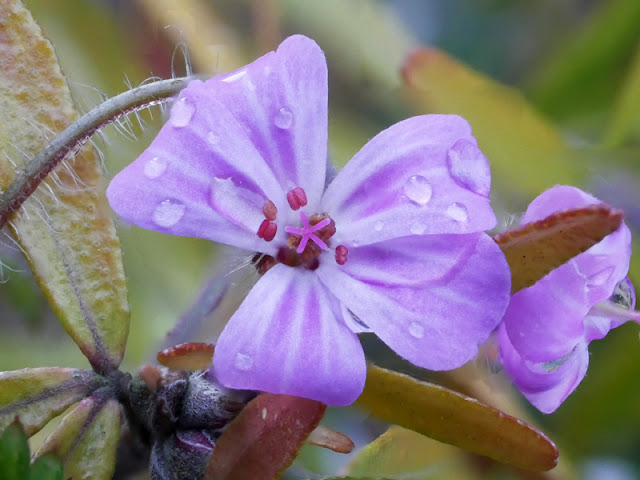 Here's another plant that is found in similar places to Herb Robert but one we really don't want in our woodlands. It's a hybrid Bluebell. This one came from a population that has established on an adjacent railway embankment and spread into our garden all by itself. This has come up in a corner of the lawn that rarely sees the mower. That's an upturned plastic bucket in the background. 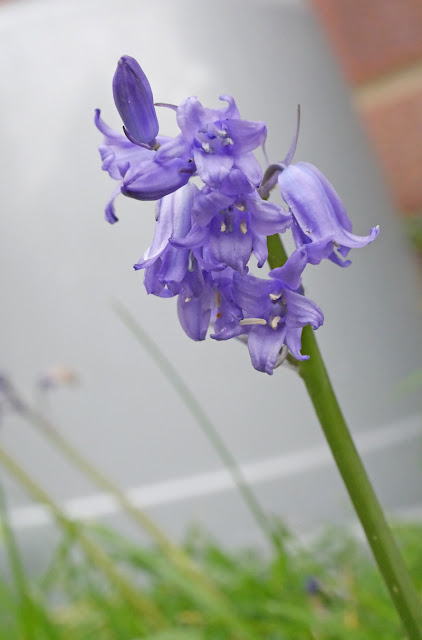 This Bleeding Hearts plant was abandoned some years ago in its pot as it didn't do too well. However, it liked neglect and as native Hazel began to overshadow it, it produced flowers again. It obviously didn't like being in the open. Raindrop sare threatening to fall off the base of the flowers.
Local visiting grey squirrels planted the Hazel which within a few years became over 6 feet tall and spread out over the plant, thus shading it obviously to its liking. 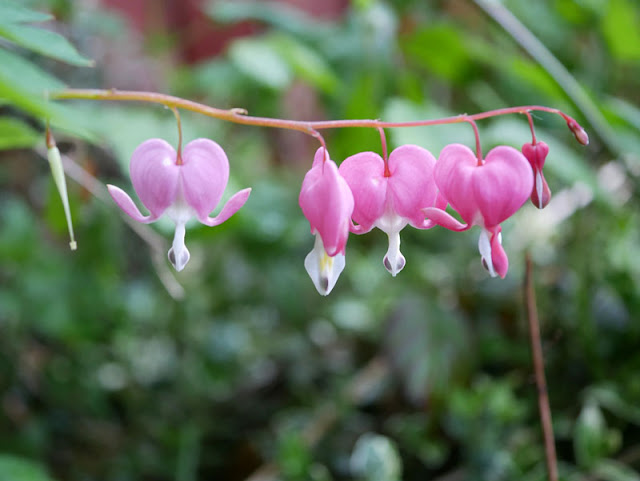 Spotted Medick is a lover of disturbed ground, thus by definition it can find a home in most gardens. This one likes my drive and thrives in an area where my car occasionally drives over it. This keeps the competition down for it. Where this plant had grown across the tarmac, it helped to show how hairy it is. You can clearly see the black spots on the leaves (often but not always triangular in shape) and the shape of the stipules where the leaf stalk joins the main stem.
When open, the small yellow flowers are like miniature Gorse flowers, unsurprising as they both
are in the same family of plants, the Fabaceae or Leguminosae family. 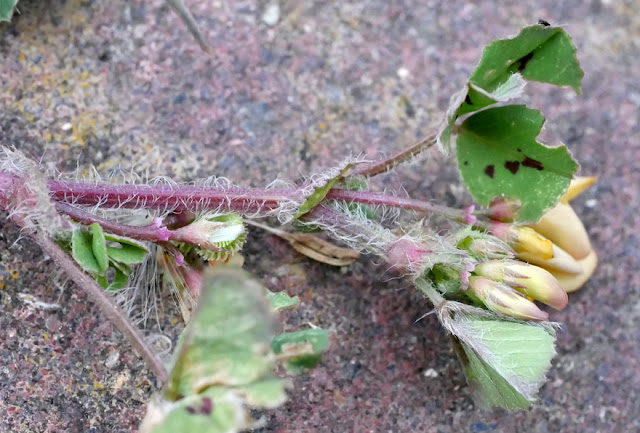 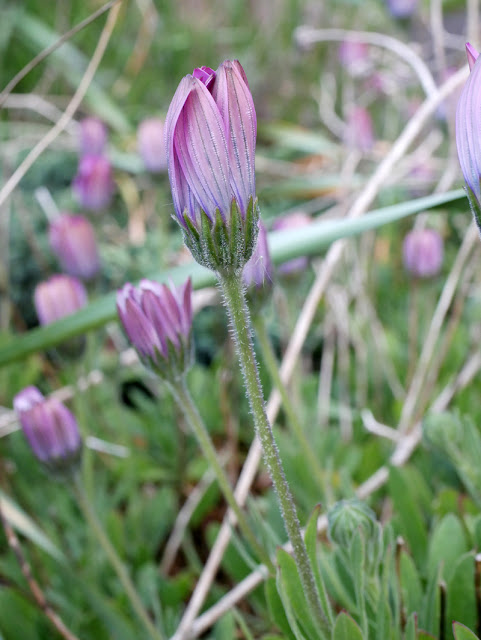 This is another garden plant, I think it's called African Daisy. Have you noticed that just like the humble native Daisy, it has closed up its ray petals for the night?

In this case, the underside of the ray petals have beautiful metallic blue lines running up them. You can't see these during the day when the flowers are open.

The photo below has got to be the best photo I've taken of a Rosemary flower for a long time. Apart from the fact that it's actually all in focus, the flower itself looks like a weird little person complete with arms (with wings behind them), legs and a little mouth that is smiling back at me. It's also clapping in delight at having its photo taken. Stunning! 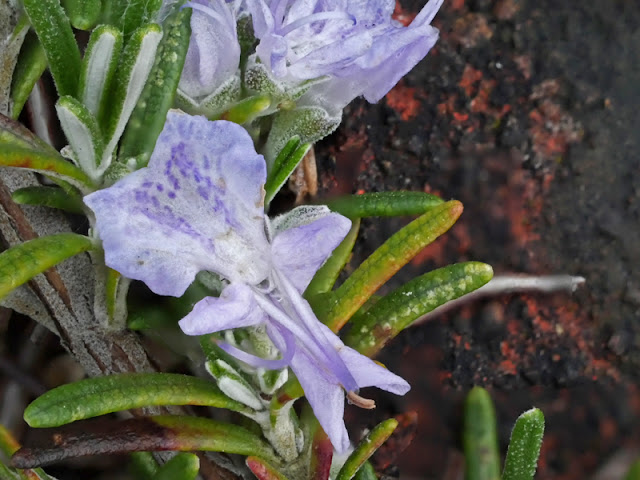 I have a nice big stand of Oxford Ragwort growing in the front garden. It arrived all by itself and puts forth a good display of big yellow daisy like flowers. They usually look radiant, but look what recent rain had done to it? All the rays have stuck together making it look rather bedraggled.
They do straighten out again when they dry out. 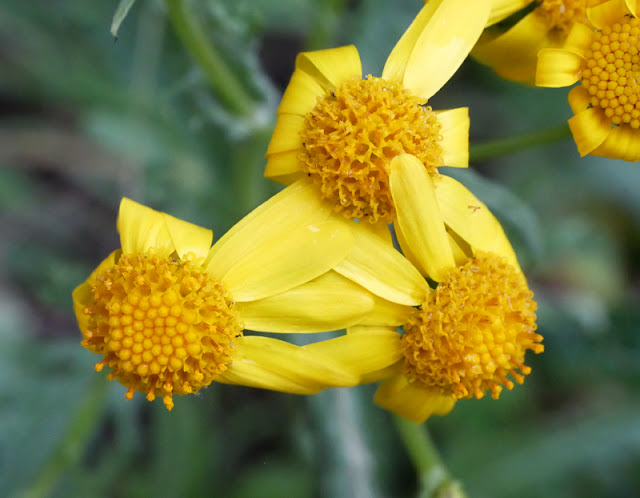 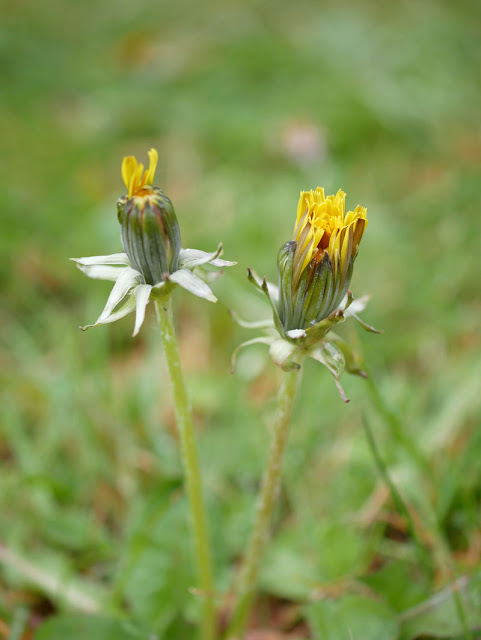 It seems to be a trait for members of the Daisy family (Asteraceae) to close up at night or in unfavourable conditions and my lawn Dandelions are no exception.

There are well over 200 microspecies of Dandelion and many are clones of each other.


With so many micro species, the group is split into several sections to make ID easier. This one is from Section Ruderalia which are typically large, brash plants and found in ruderal places of course.

It's also with Dandelions that I will end this blog, this time with its "clock" of seeds attached to feathery parachutes that spread it far and wide. 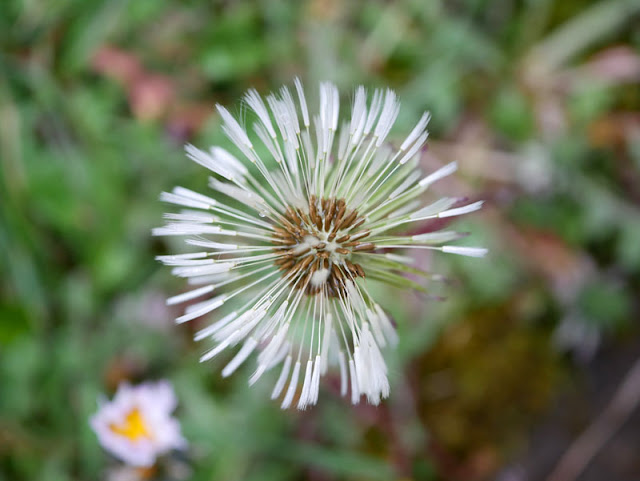 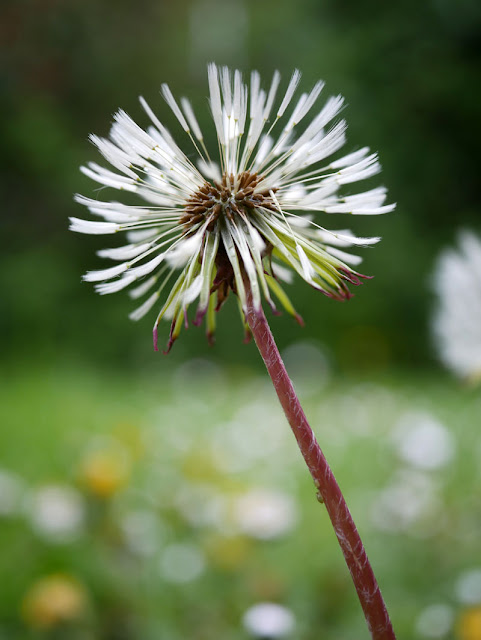 The recent rain had caused all the little white parachutes (pappuses) to stick together and so unusually it is showing off the seeds perfectly. One would normally have to pull or blow it apart. to easily see the seeds.


If you blew on this clock, not a lot would happen until it dried out.


The lockdown has caused me to look harder at nature in my garden.
Given that it was evening and also wet, there wasn't any insect activiy to photograph, but there are usually bees, hoverflies, beetles and spiders, along with slow-worms (an Adder once) mice, foxes and grey squirrels. Add in the visiting birds (most unusual has been Great Spotted Woodpeckers) and there's always something to see in our garden.  I hope there is always something to see in yours if you are fortunate enough to have one. If you don't have one, look out for so called "street weeds" and have a closer look at them. They too are very interesting and sometimes quite rare.