- May 27, 2020
Lockdown has now been relaxed so that we can go anywhere we like outside for exercise or mental health, relaxation or even to sunbathe. This means I can now resume my botany excursions provided I maintain social distancing and don't go anywhere away from home overnight. That's fine by me as all of Kent and East Sussex is easily within an hour and a half drive from my home.
However, the problem now is that after being kept in for so long, everyone is heading for the popular destinations, so that all beaches are crowded as are all parks and "nice places to be".

Knole Park in Sevenoaks, is also now packed out daily, but it is a huge area and the remains of King Henry VIIIs deer park where he hunted when staying at Knole House (now a National Trust venue). Being fairly local we found a secluded back entrance to the park and had the area pretty much to ourselves. We even spoooked a solitary deer that thought it was all alone at this end of the park.

Being constantly grazed by (too many) deer means the sward is very short and most flowers are very small, though I did find some things of interest that deer obviously don't like to eat!

The first flower seen should have been well and truly dead by now, the Lesser Celandine. It just goes on giving doesn't it. They are flowering at their peak when the Bluebells are in full swing; some started flowering in late December and a few are still going in May
Beautiful in the sunshine of a May day.
Ficaria verna 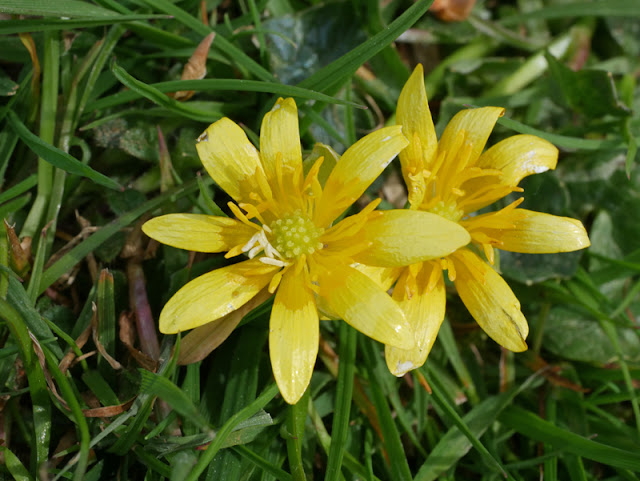 In a deeply shaded area under some Pedunculate Oak trees I spotted another early Spring flower still flowering - Cuckooflowers. They like damp areas and the ground still held some dampness in a ditch under these ancient trees. As a result of the shade, the flowers were almost white, whereas in the open they are usually pink.
Cardamine pratensis 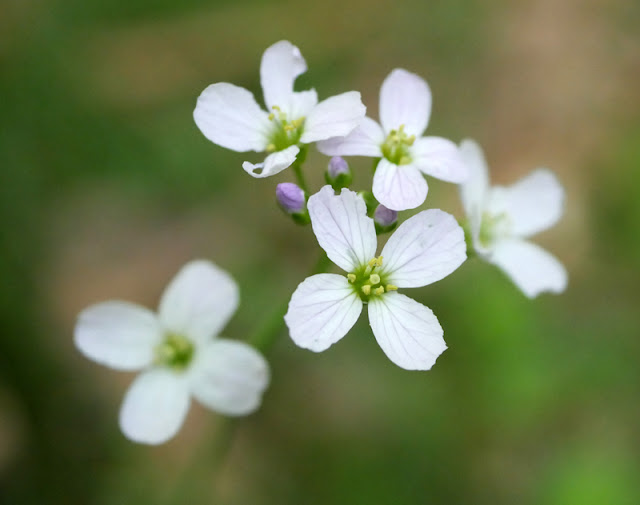 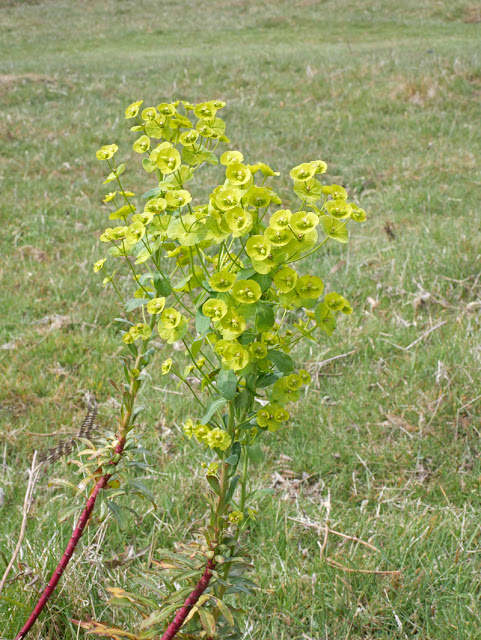 I then started noticing some quite tall Euphorbias which were quite obviously Wood Spurge. The odd thing was that few liked being under the trees and hundreds were growing and flowering in the open under the blistering heat of the sun. It was quite apparent that the deer wouldn't eat them either, but then, most Euphrbias are poisonous to some degree.

One of the tiny flowers in the acid turf were these dainty Heath Bedstraw plants, much more delicate than the usual Hedge Bedstraw seen on the chalk and neutral soils elsewhere.  This whole plant shown here was probably the size of a 2p coin.
Galium saxatile 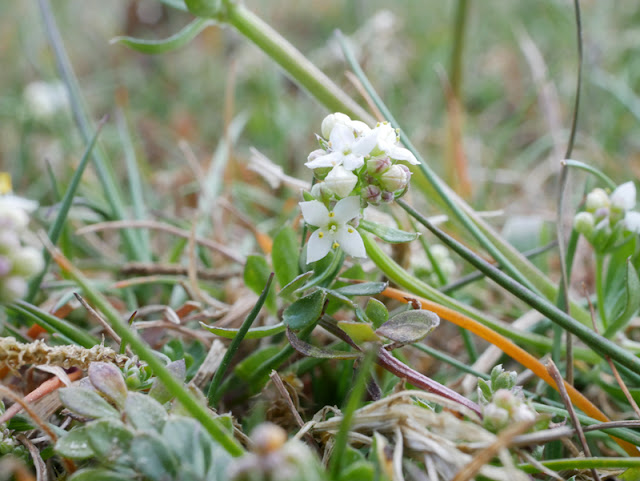 We then came to a small pond. I say pond in the loose sense of the word. It had semi dried up and had become an area of semi liquid mud really. However, dotted on the surface and drying margins of this pond was the star species of this walk, Pond  Water-Crowfoot. 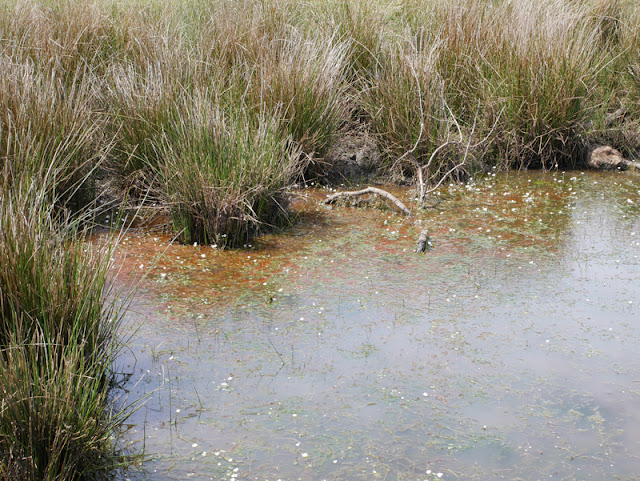 This photo below shows the flowers, but also that this plant has aerial leaves and behind the flowers, submerged leaves (now out of the water of course as it's drying up). That's very useful to know when trying to identify this tricky group of plants (there's several quite similar species to choose from). 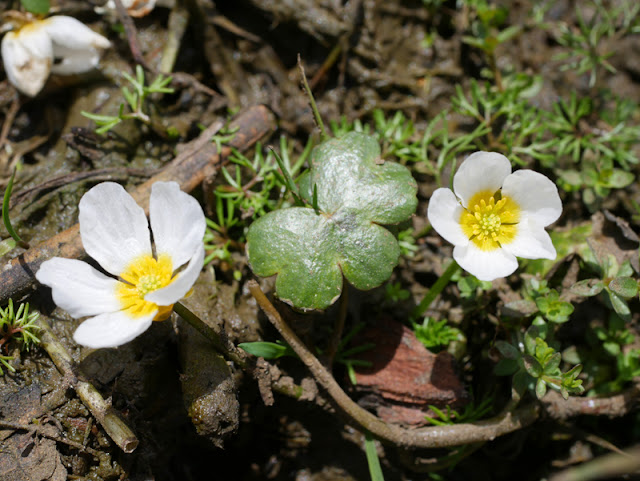 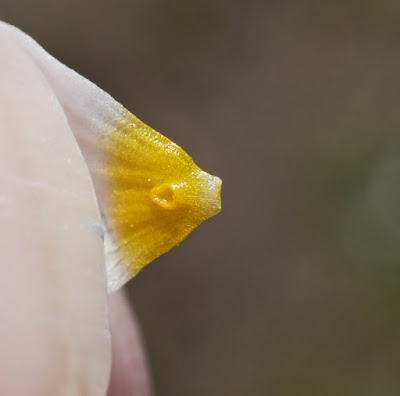 A dropped petal shows the nectary at the petal base. This one is pear shaped and combined with the shape of the aerial leaves and that the plant also has submerged leaves, means it has to be Pond Water-Crowfoot.

I was saved some time too by the Kent County Recorder having recorded this from here the year before, but I didn't know that at the time I found it. Get in the habit of photographing most parts of a plant to identify it later if need be. 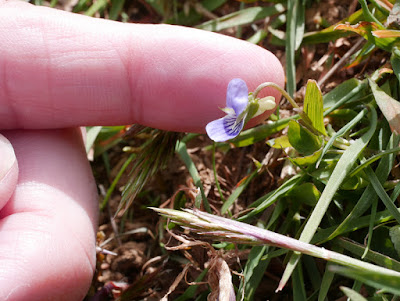 Near to the pond was the smallest Violet flower Ive ever seen, smaller even than a Field Pansy. It had been bitten off by deer and had regrown a flower. It turned out to be a Common Dog Violet, but it was impossible to see in the field being so small.

Dotted almost everywhere was Tormentil, a small, usually 4 petalled flower, which is a relative of the (usually) 5 petalled Creeping Cinquefoil found everywhere that isn't too acid. Watch out for hybrids between the two as they readily "get together". The hybrids will usually have both 4 and 5 petalled flowers on the ame plant. With the soil being so acid here, all I found were simply Tormentil.
Potentilla erecta 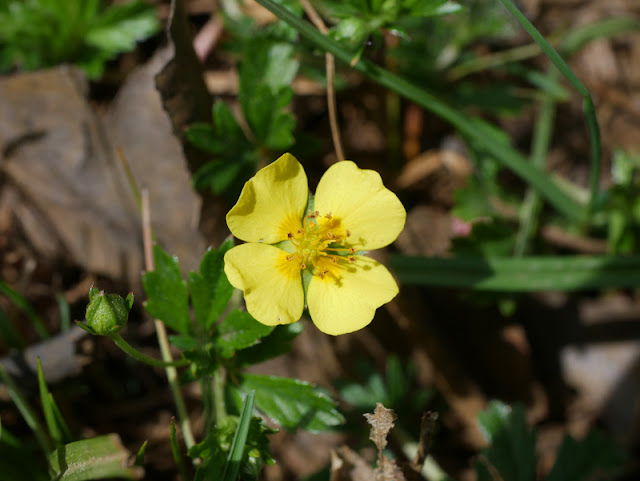 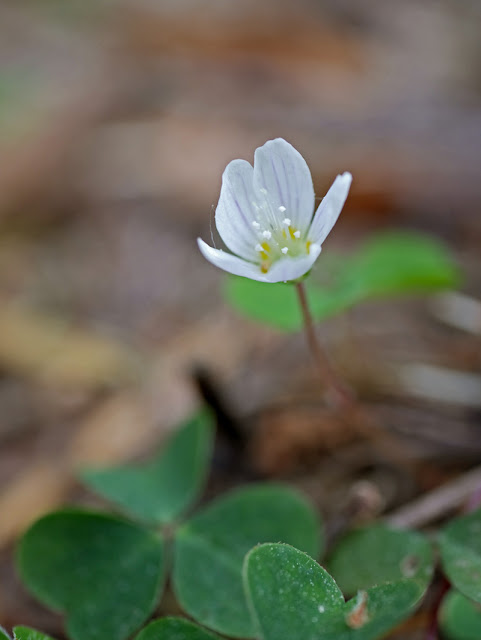 A large patch of Wood Sorrel was under a tree on the return walk and some flowers were still out. With it being late afternoon, most were closing up and this was about the most open flower I could find.

So ended a pleasant May day walk in quite warm Spring sunshine (low 20s).

It's coming up to the best time for the child loving orchids and other chalk species, so I will be visiting some likely looking areas soon.