- May 31, 2020
I don't know why I picked this monad to survey. I had done some of it only last year, so didn't expect to find that much not already found. However, this time, I thought that I would properly explore the piece of Darenth Woods that fell within this square and the adjoining area too. Here's what I found in the woodland part on the first day. 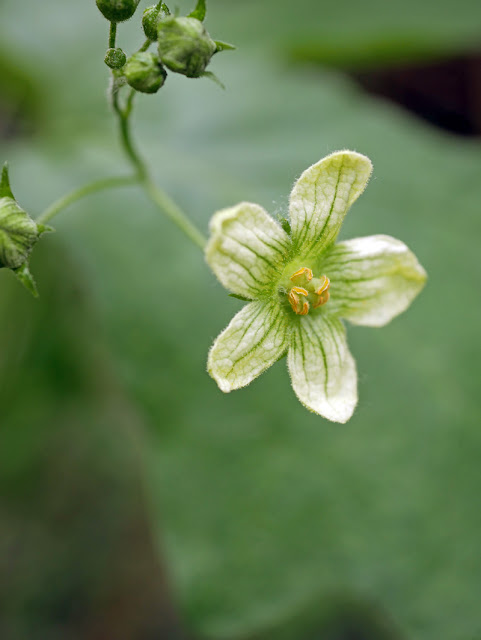 White Bryony is pretty much everywhere now with its big leaves, coiling tendrils and greenish flowers, there's nothing much else that looks like it.

It was abundant around the woodland edges. 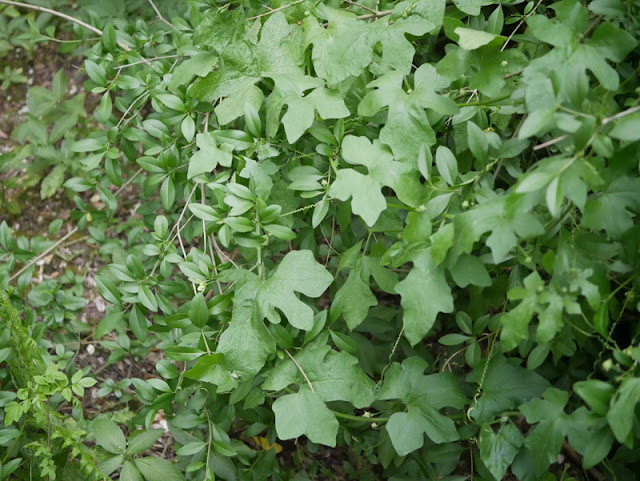 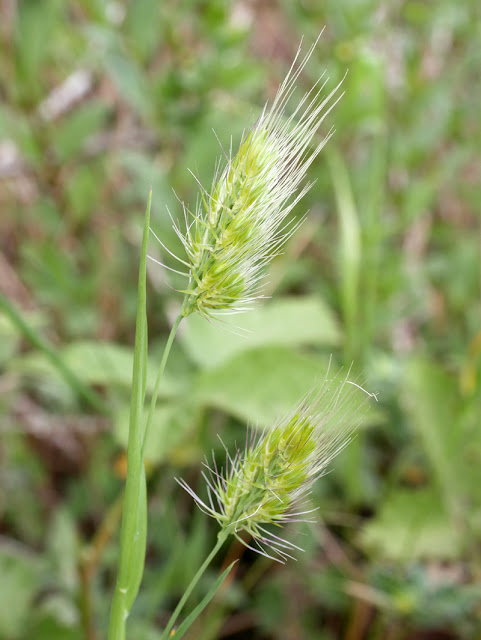 This grass was on Watling Street on the northern edge of the woods. It's a one sided spikey looking grass and is called Rough Dog's Tail.


I later found it in massive amounts on the main road junctions for Bluewater nearby.


There were some lovely displays of Stnking Iris, even in very densely shaded areas under the trees. 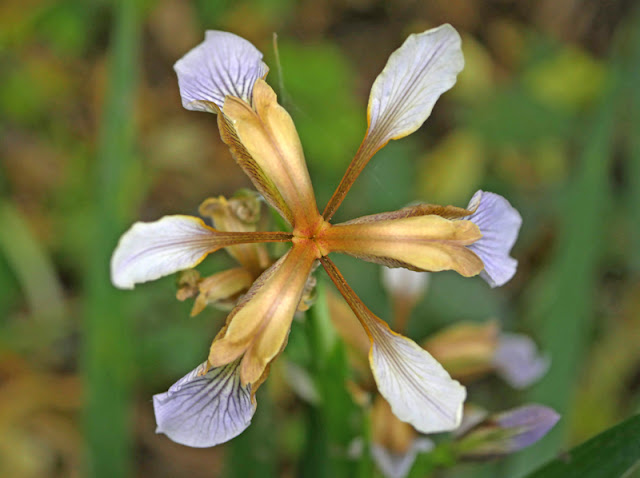 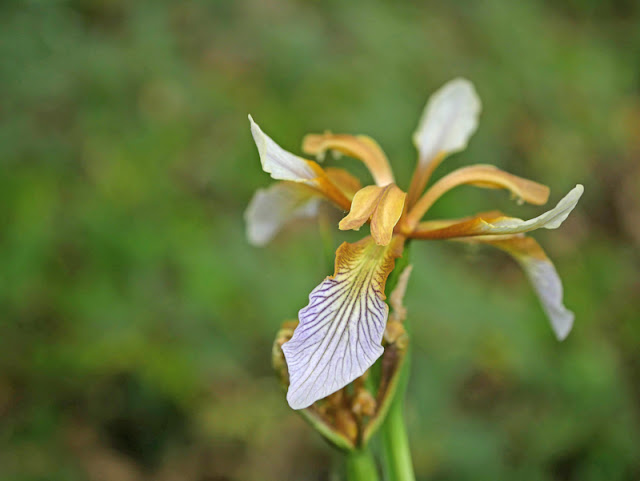 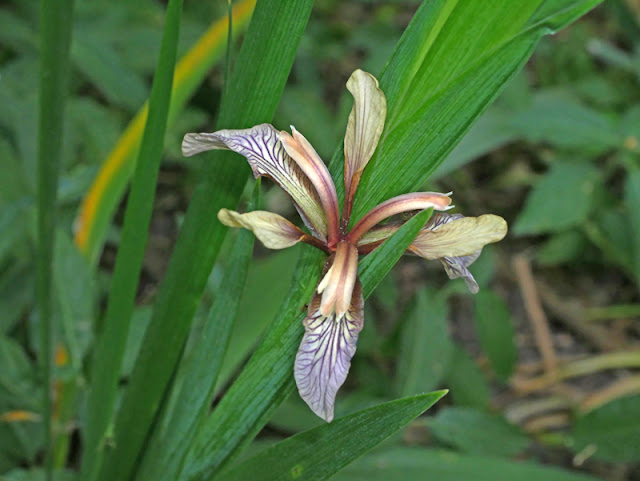 Field forget me not is a very common plant, but it's not often I see one where all the flowers are pink instead of blue. 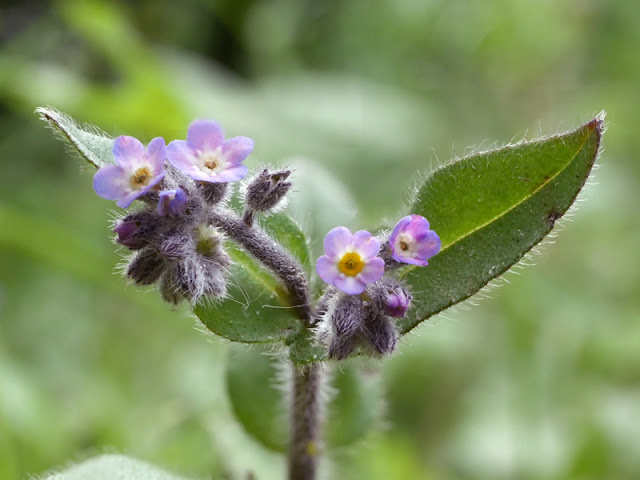 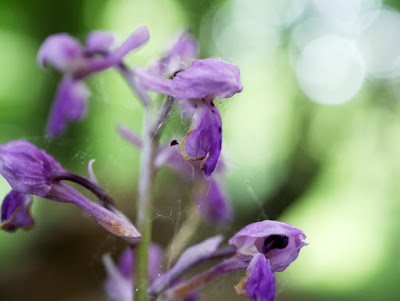 Early Purple Orchids went to seed a few weeks ago so I was very lucky to find one with some flowers still out (though covered in cobwebs). I was even luckier to find a total of 99 spikes in flower or gone to seed as well. Try as I might I couldn't find the 100th spike!

Oddly, these have not been previously recorded from this monad before.


Bittersweet or Woody Nightshade was also now in flower and found in a typical coppiced area where more light came into the woods. 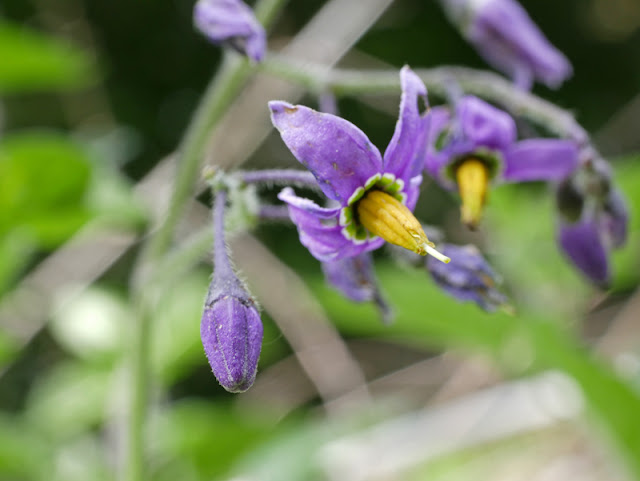 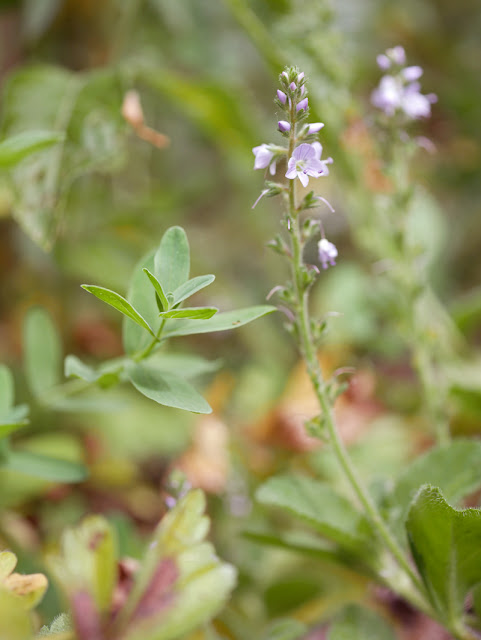 It's rare to find Heath Speedwell in north Kent on the chalk, so it was great to find a patch in the same coppiced area as previously mentioned.

Here, the chalk is covered by a mildly acidic clay cap which covers many hilltops in the area. As you go down the hill, the clay becomes thinner and chalk is exposed, giving rise to acid loving plants on top of the hill and calcareous loving plants down the slopes.

Its leaves are quite different to most other speedwells as shown below. 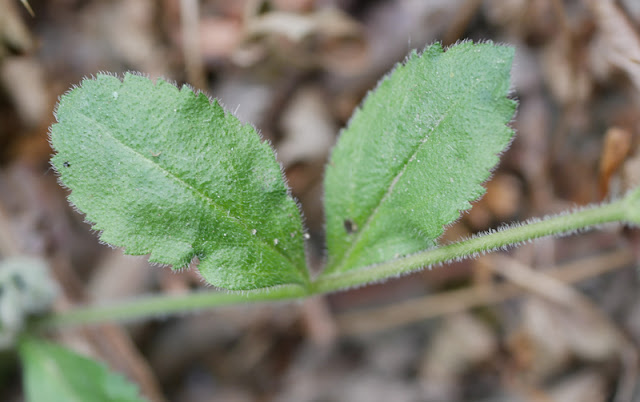 The next day I returned to the same monad but recorded in a completely different part of it. The habitat was mainly road verges and "waste ground", thus the flora was very different to that found in an ancient woodland.

Wild roses were abundant with most being the common Dog Rose with its familar arching stems, big prickles and large usually white flowers. This one below stood out as different being pink and the flowers were much smaller. A look at the stem revealed bristles and thorns.  This is a Sweetbriar rose. 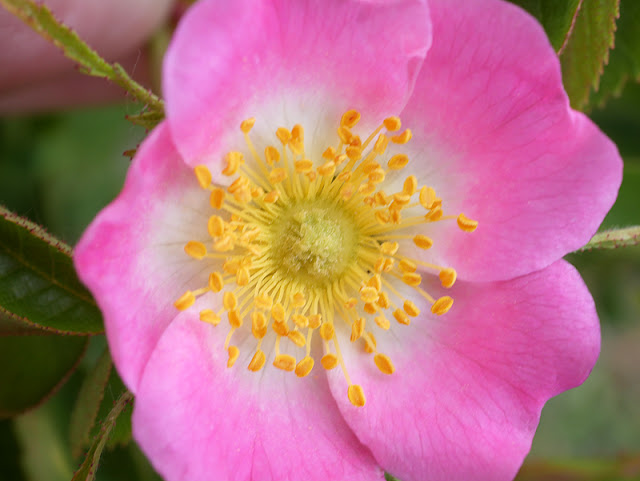 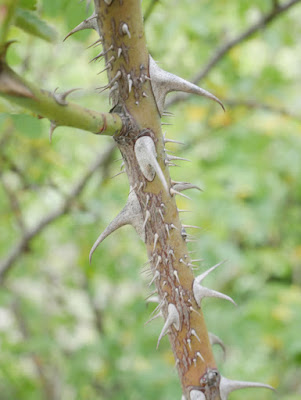 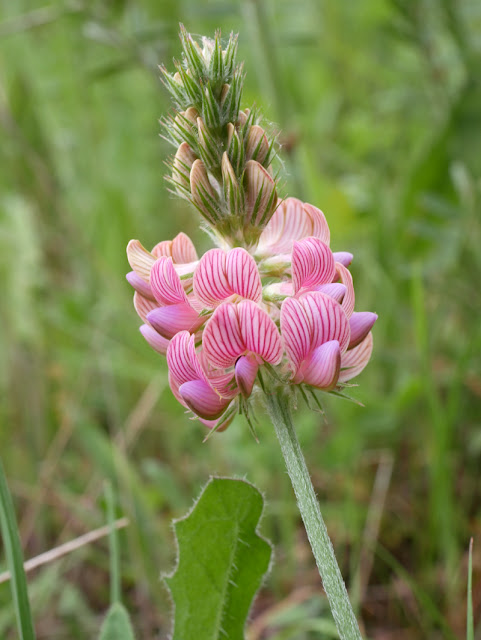 Sainfoin growing in this area is usually the result of amenity sowing and this was found on a road created in 2003. Nearby were also Lucerne and Goat's rue, all now naturalised long the roads here. 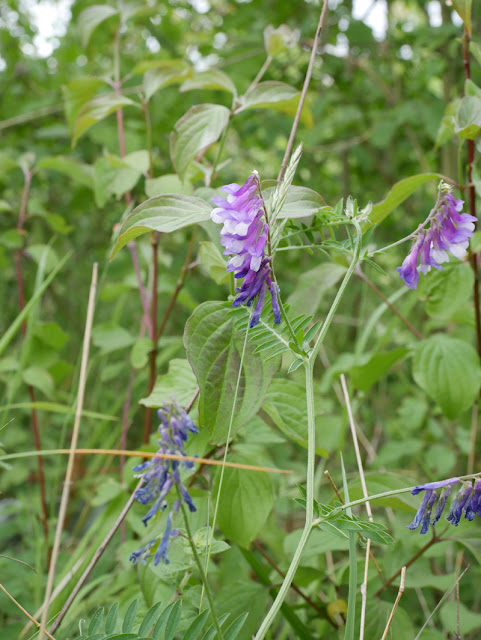 This is another alien introduction that had its origins in amenity sowing in 2003 here, it's Fodder Vetch which looks like an overgrown Tufted Vetch with two tone flowers instead of all purple/blue ones. 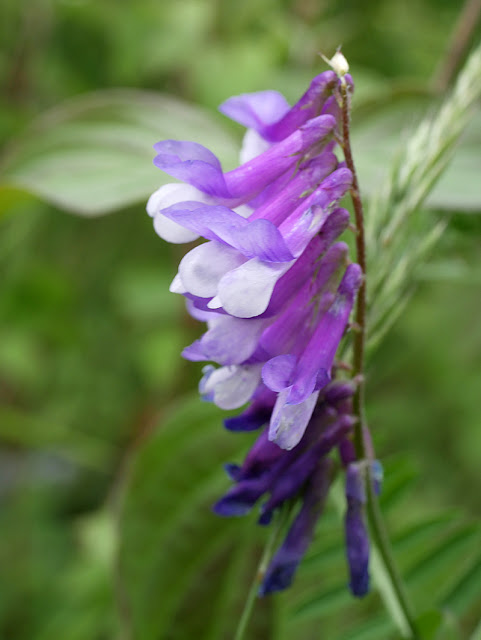 
This was the area I found the Fodder Vetch in, behind the pole in the bushes. But then I found something else growing there too, hidden away on this roundabout completely out of view of passing traffic and completely native. 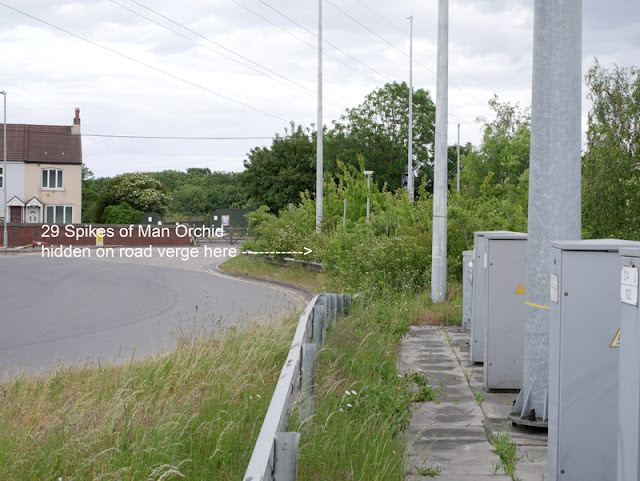 As the photo shows, I found an amazing 29 spikes of flowering Man Orchid here. As it is a critically endangered species, that was good news indeed. Here's some of them growing quite happily amongst an old lorry tyre and other rubbish. 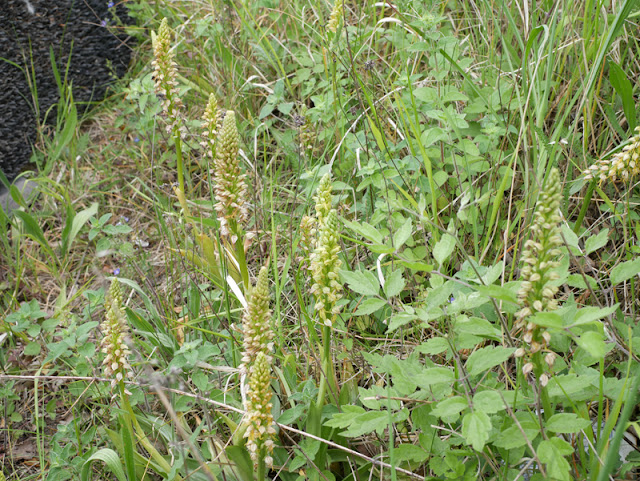 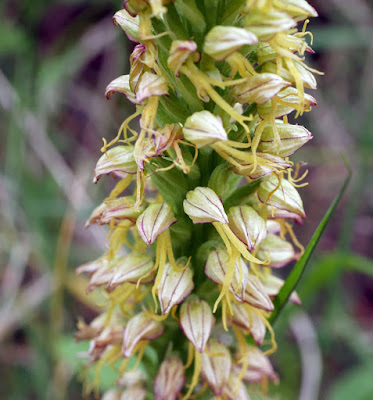 This was an unkknown site for them, so it is a new record for this species in this square.


Here are the little "men" dangling down, each spike may have 100 such flowers. 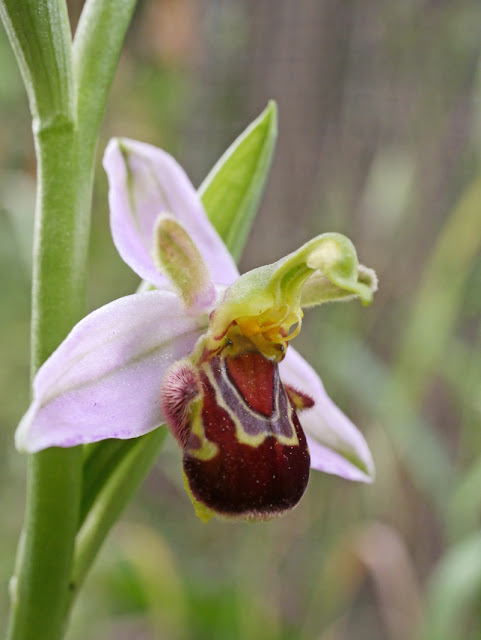 I then had another nice surprise of three Bee Orchids on the opposite verge, another new record for this monad.


Next to these was another nice looking and uusual wildflower. 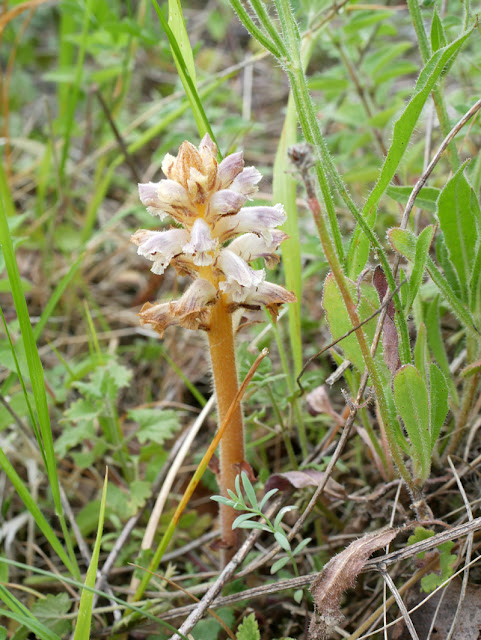 This is a Common Broomrape.


It is parasitic on other plants and chooses many to attach to, not just one species like some Broomrapes do. 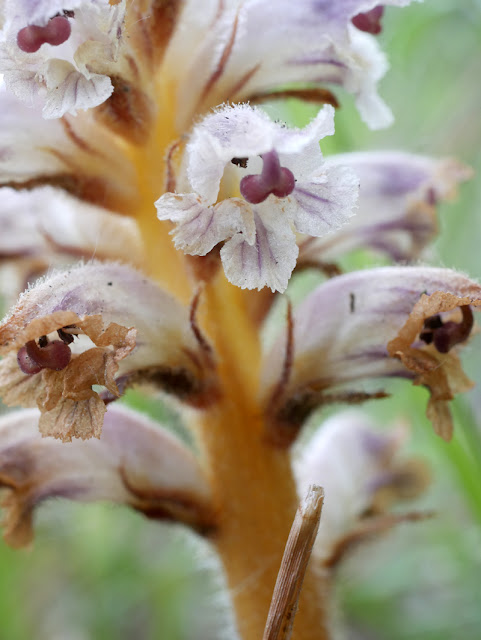 
In the "waste ground" areas, I found Wild Strawberry. 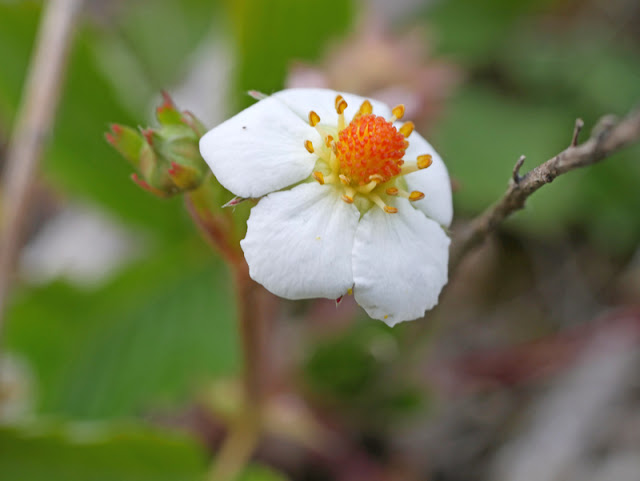 I then looked at an "island" of land between two roads, one being a main approach road to Bluewater the other a local road.  I was very pleaed to find there over 100 more Man Orchids along with Yellow Vetchling too, both Kent RPR (rare plant register) species. I've reported these finds to the Kent Wildlife Trust and I can but hope that they may be adopted as a roadside nature reserve given the impressive number of endangered orchids present.

I checked Google Earth and the site was created in 2003 for new roads connecting Bluewater to local roads. Subsequent satellite photos show it rapidly scrubbing over with probably only 10 per cent of the island now left as open grassland. Hopefully, management will be put in place to keep this from scrubbing over more and thus losing this new colony of man orchids soon after it began.

These attractive flowers below belong to one of the culprits that rapidly swamp out grassland plants like the Man Orchid. It belongs to Dogwood, until it in turn loses out to Beech or Oaks. 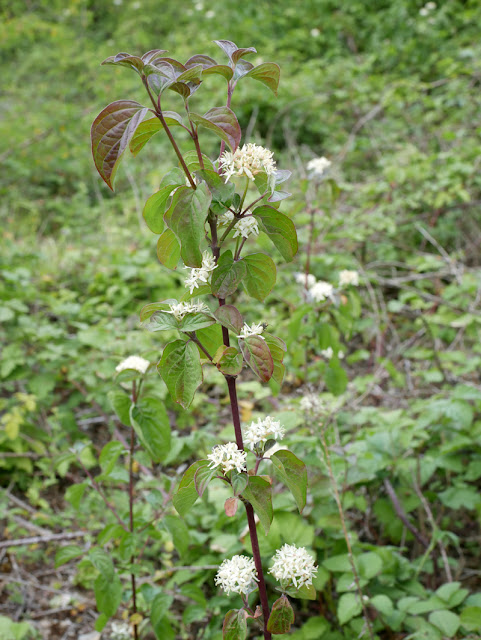 Of course, I found a lot more plants than mentioned and in another month or so there will be a lot more different species. Pyramidal Orchids will dot the road verges here too for example, very soon. It goes to show that even supposedly well known areas can throw up some surprises. I guess keeping local was one advantage of the recent lockdown to help me find them instead of going off somewhere miles away.