- August 02, 2016
After leaving Dungeness I travelled the short distance to Greatstone-on-Sea. This is still within the Dungeness NNR but is a completely different habitat being made of sand. For getting on a mile or so there is a section of beach backed by long established sand dunes, which in turn are bordered by houses, gardens and the coast road. 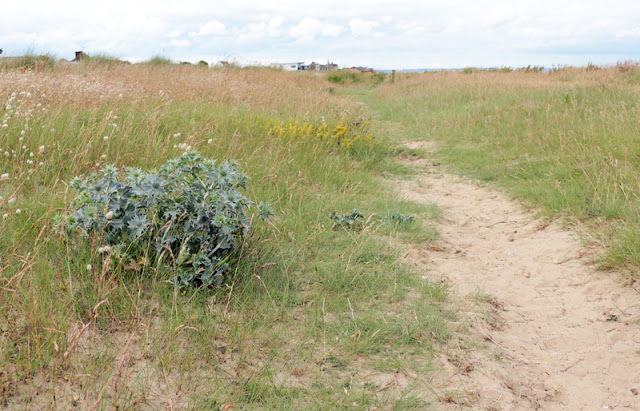 I took this photo as a habitat photo for Sea Holly, a Kent RPR species in itself, but the photo shows a typical part of the habitat, though there are many hills/dunes made of sand as well. Vegetation is well established, so there isn't much in the way of dune movement.

One of the peculiarities of these dunes is the abundance of garden escapes which seem to thrive in sand. Rather odd really, as most people put them into well composted gardens, water and feed them and so on, yet many do as well or better on dry sandy soil with hardly any water! 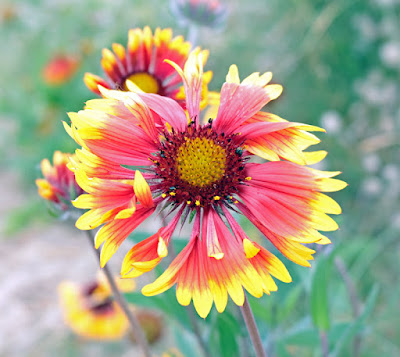 One such garden escape that you really cannot miss at this time of the year is this!

It's a Blanketflower with vivid colours, quite a tall plant and present in large numbers in parts of the dunes.

They do look very attractive, though I have no idea if they damage the environment by crowding out other delicate species.

One species you can see doing well with them present is Haresfoot Clover, the fluffy small seeded plants in the photo below. 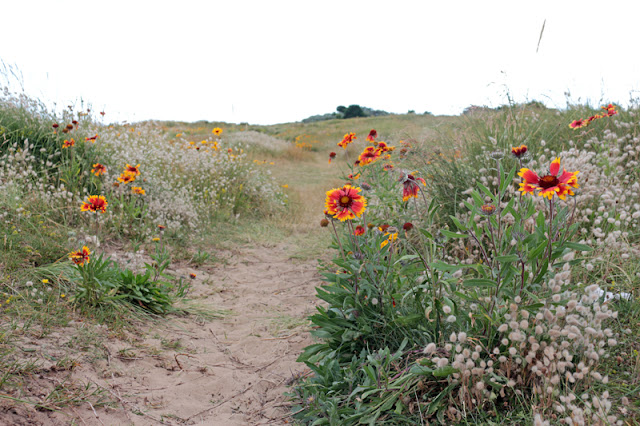 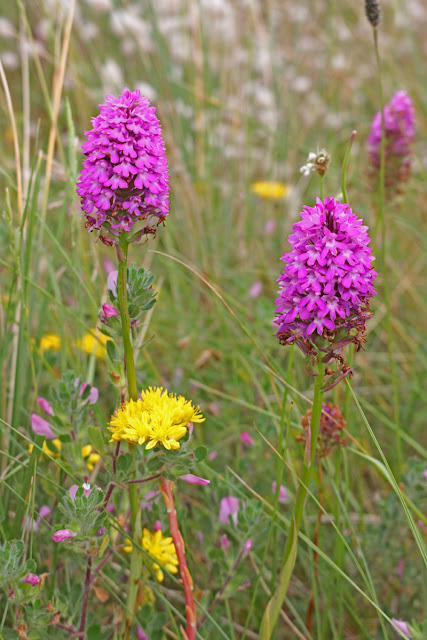 Of course, the ever present Pyramidal Orchid was dotted about here and there. They are one of the more successful and common orchids to be found, I think due to their ability to do well in a variety of habitats.

Many Kent road verges are full of them in July, great to see. 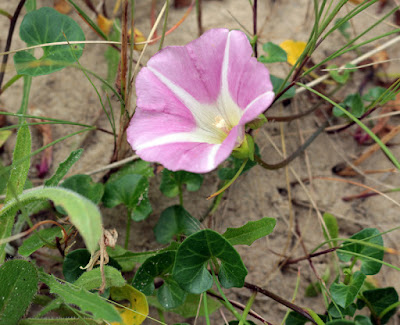 These are the flowers (and leaves) of Sea Bindweed, surely the most attractive Bindweed in the UK.
Though similar to Field Bindweed, the flowers are bigger and showier and the leaves are fleshy, small and compact (to reflect the drought conditions it thrives in). Field Bindweed lives up to its name with yards of twisting larger leaves wrapping around just about everything it comes across.
I think the sparse sandy background also sets off this flower better than the soil of an arable field edge (or my front garden) with Field Bindweed


I had already mentioned Sea Holly above and a few had their stunning blue flowers out. Globular heads of tiny blue florets gave the appearance from afar of a single big blue flower. The species is declining rapidly in Kent, in large part due to the constant movement of shingle by the Environment Agency to bolster sea defences. They never get a chance to grow and set seed, except in a few places like here. 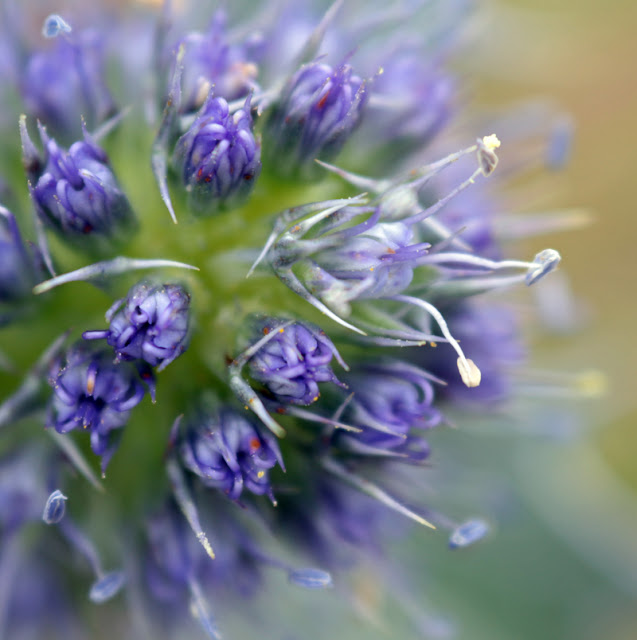 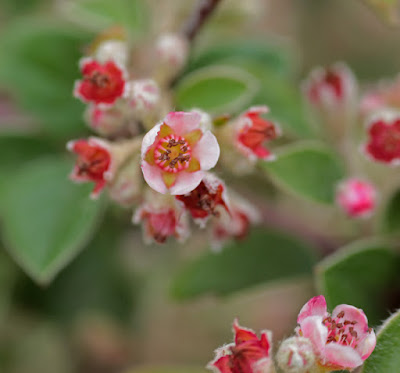 I then came across what looked like a small tree in flower. This one was definitely "invasive", a Cotoneaster species. The usual invasive species is the Wall Cotoneaster with its herring bone shaped branches full of red berries in the Autumn and Winter. This one was rather different and I think it's a Cotoneaster franchettii. Of course I have several other photos of its branches, leaves and other parts of the flowers to aid identification, along with friends on Twitter to help me. 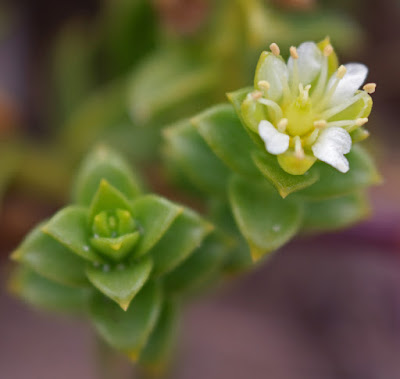 I was very lucky to find this, not because it's rare (its' very common), but because 99.9% of them were in seed. It's a Sea Sandwort, it's distinctive Incan pyramid like structure in the fleshy leaves very distinctive.
The berries it produces float and get carried off by high tides to populate other areas. Much like coconuts then! 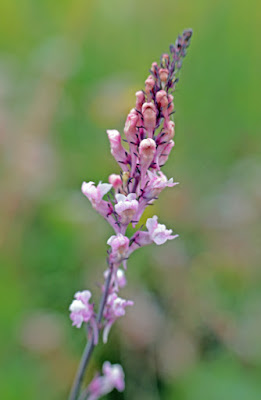 This, not very good photo, is a Purple Toadflax, except it's pink! It's the first pink one I've seen, though Harrap's says they do also come in pink.
However, in the week since, I've now found several pink forms inland. I think they look more attractive than the usual purple variety, or would do if the photo wasn't ruined by the breeze. 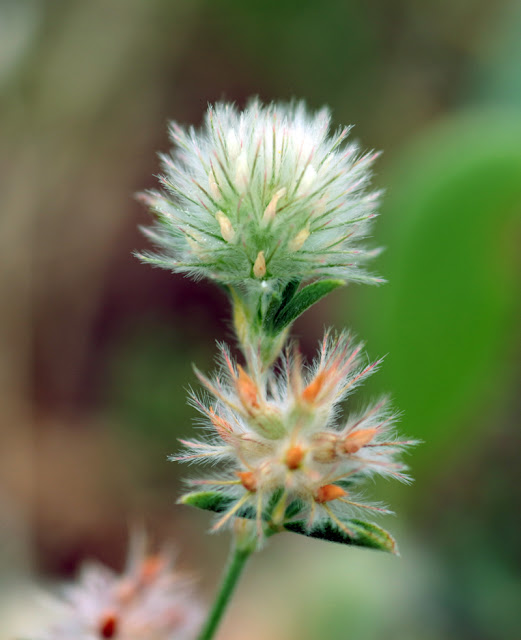 Earlier I mentioned Haresfoot Clover, with their fluffy appearance demanding a photo : though most were in seed when they change into a cylindrical shape.

On the top flower you can just make out the small white pea like flowers between the fluffy bits. Their structure is pretty much the same as found in the clovers on your lawn.


The dunes are a real mixture of native plants and garden escapes, making it interesting and also sometimes challenging to identify them. Garden plants aren't my forte, but as I record things I find, I have to try to identify those I do find in the wild.

Fortunately, I have found these roses before at Camber Sands and Sandwich, both times in sand dunes, making identification easy, they are the Japanese Rose. They can be invasive and dominate areas like they do in Camber, but here and at Sandwich they don't seem to spread too much. Perhaps because they're often eaten to bits by moth caterpillars? They have very large bright pink flowers, so it's no surprise gardeners like them. 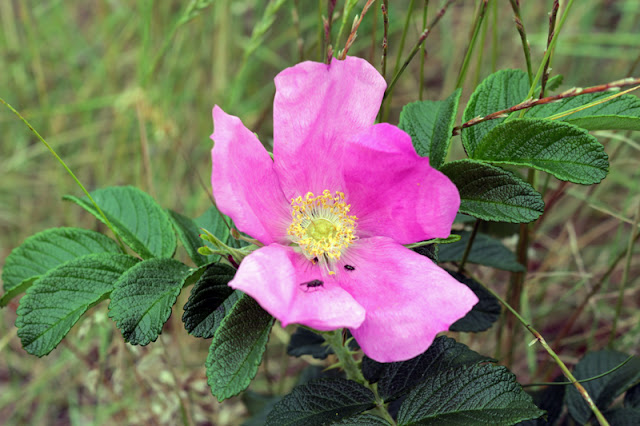 The nice thing about sand is that you can sometimes get a good photo of a whole plant without excessive greenery in the photo,making it easier to see at a distance. If the plant below had been in foliage, I doubt you'd have seen it's leaves or sprawling habit at all. 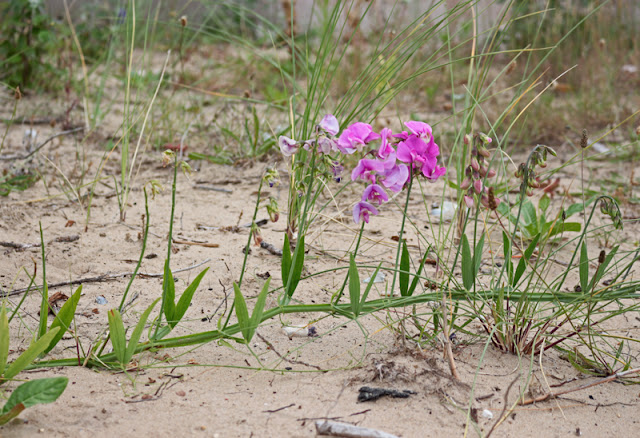 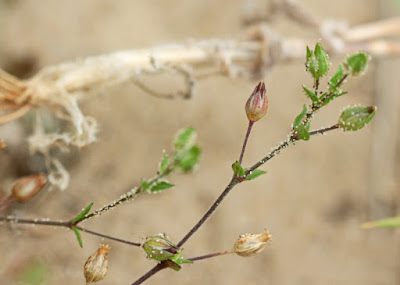 From the large sprawling Pea I then found a really tiny native plant,  Annual Pearlwort. It's actually very very common but goes un-noticed by most people as from standing height it can look like a bit of short grass.
It's found in pavement cracks, in roads, walls, gardens, fields and as I found today, in sand dunes! 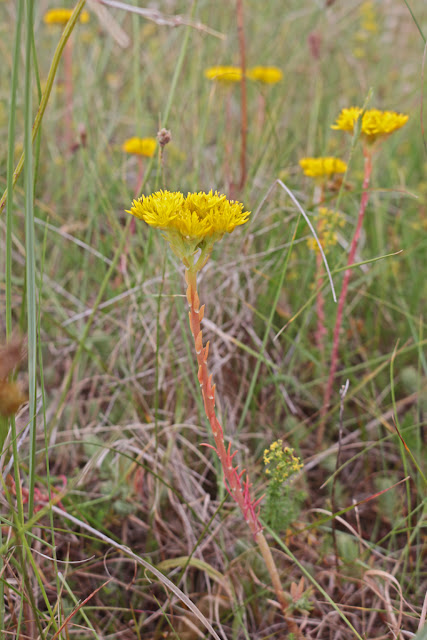 You may have noticed this plant in the photo of the Pyramidal Orchid above. There wer ehundreds of them, the Reflexed Stonecrop, possibly the tallest Stonecrop we get in Kent, it's another non native plant in the dunes.

Stonecrops have fleshy, succulent types of leaves and do well in dry habitats like here, in shingle or on old concrete, walls, etc.

There's a small Lady's Bedstraw in the photo as well, in places there were carpets of them, brightening up the dunes. 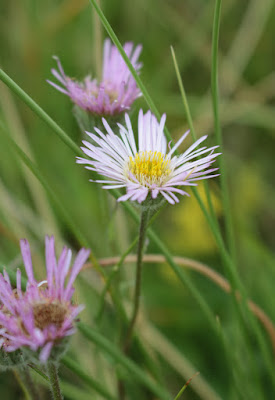 I found a clump og thes eMichelmas Daisies in the dunes, another garden escape. There are several species of these daisies that have spread into the wild all over SE england.

Having said that, this is the first hairy one I've found. As there's only one species known to be hairy it must be... yes you've guessed it, a Hairy Michelmas Daisy! 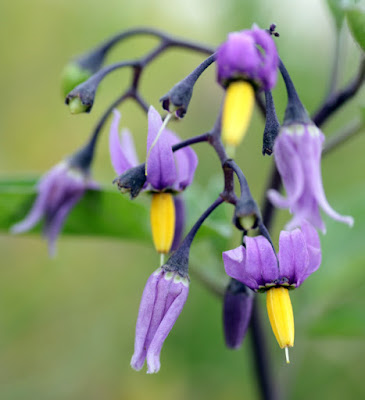 Back to a native plant again! This is Bittersweet, also known as Woody Nightshade and again grows in virtually any habitat, thus making it a common but pretty find.

Green berries that turn red follow on, they are not to be confused with Deadly Nightshade which actually looks completely different.

I don't know why people think this is Deadly Nightshade, but having said that, I did myelf for many years (before I got into wildflowers anyway)

Back again to another garden escape, this photo below was one flower of a group of Rose Campions, very similar in structure to Red Campion, but covered in wooly hairs giving it a silvery appearance. The flowers are also larger and a deep crimson red. 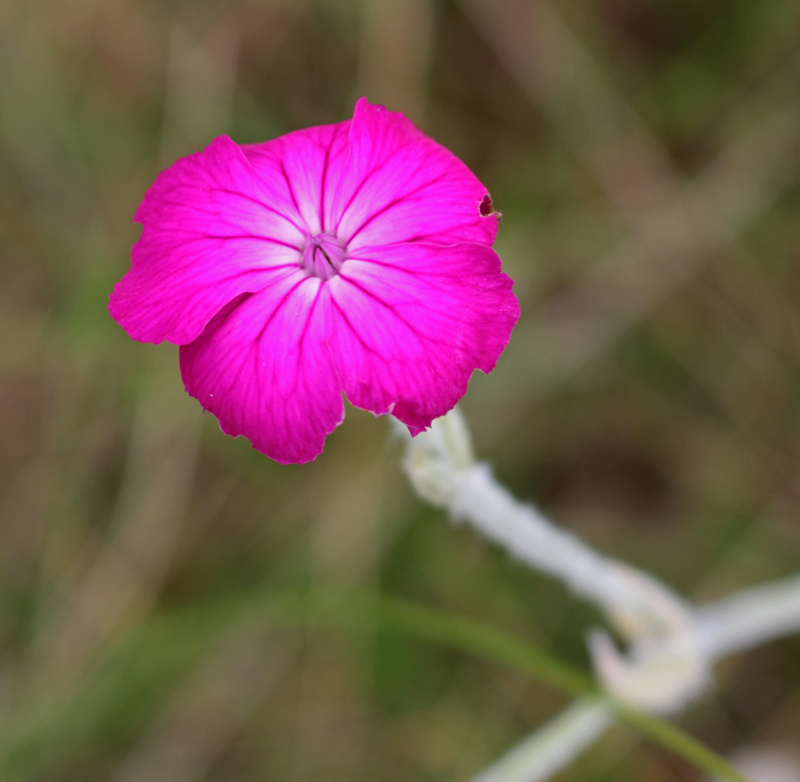 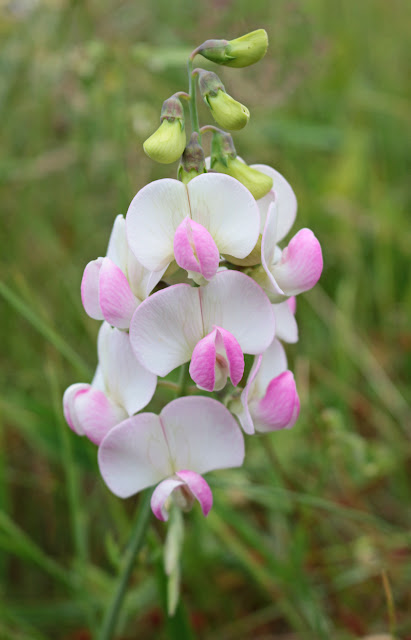 I didn't find the rare Sea Pea but I did manage to make one last find of an unusually coloured, two tone, Narrow-leaved Everlasting Pea.


So ended an eventful day of Bog, Shingle and Sand Dune habitats. As you can see from the 3 parts to this blog here, I saw so much I had to split the blog into 3 parts to make it readable.  If you missed part 1 or 2 scroll down form here to read them.

Another point is that I had been to all three places many times, but each time I see something new, so don't ignore local haunts that you may have been to many times, there's always a chance of finding something new, especially if you visit at different times of the year. 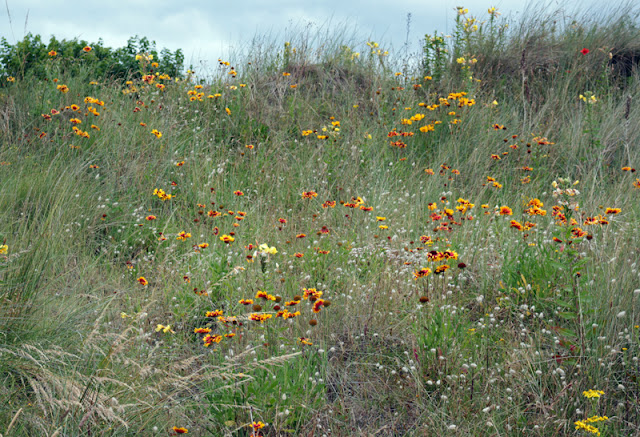