- August 19, 2016
I'm a couple of weeks behind on my blogs now, so this already seems like distant history, despite it being less than a month ago.
Anyway, when I get time I try to record plants in 1km OS map squares (monad) with hardly any records in order to bolster the records for the next BSBI atlas. This day, I was revisiting a monad to the West of Meopham via public footpaths. I had last visited in late October last year so I hoped to find new records at this time of the year. 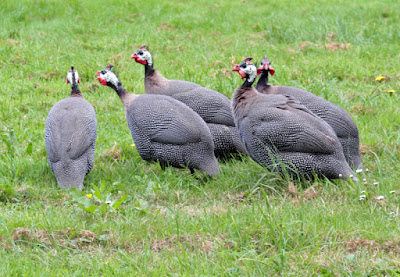 As I walked down a country lane noting plants along the way, I had some company that I shooed off the road for their own safety. I'm not a bird person, so I don't even know what they are. 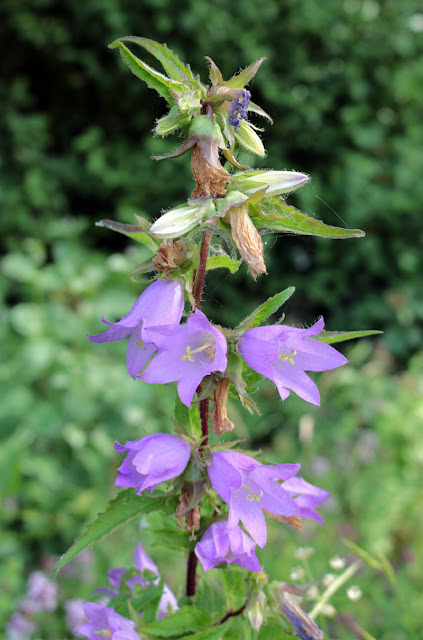 There were several of these beautiful Nettle-leaved Bellflowers in hedgerows throughout the walk, quite an impressive wildflower, they can grow reasonably tall and usually have multiple blue/lilac flowers. 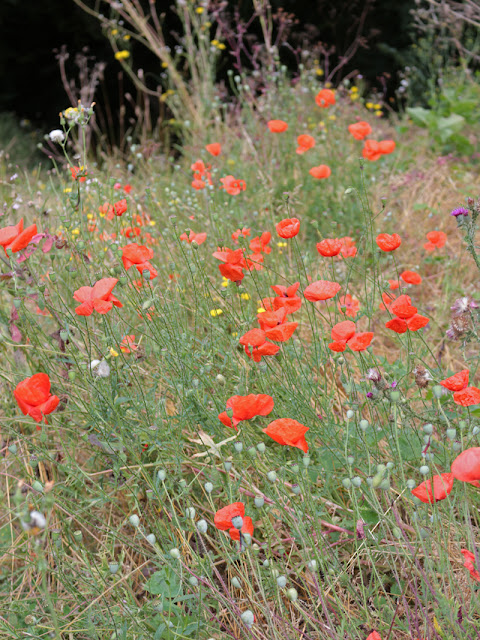 As I left the road and ventured into the fields, the flora became more interesting with numerous chalk loving and arable field edge plants, like these Common Poppies. 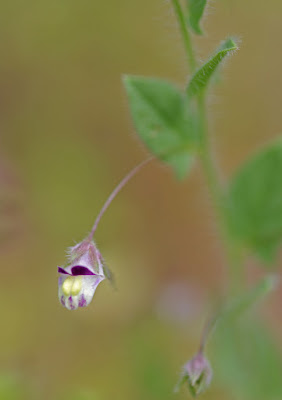 These tiny toadflax flowers belong to an arable weed called Sharp-leaved Fluellen. They are relatively common on arable field edges on chalk, so long as the farmer hasn't gone over the top with the use of herbicides.

They are very easy to miss as the flowers are mostly less than a centimetre long.

Having found this I kept a look out for its close relative. 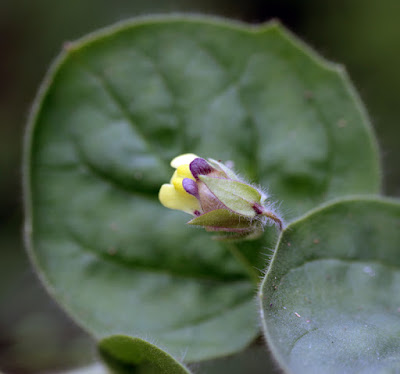 I soon found it, the Round-leaved Fluellen. The flowers are very similar though usually a bit larger, but the leaves are completely different, being large and round and sprawling across the field edge with the tiny flowers poking out from within them. 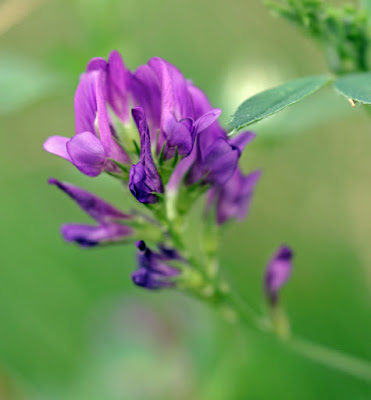 The attractive dark blue/purple flowers of Lucerne were common here, no doubt a relict of a fodder crop. However, they are now very common along many road verges in North Kent, especially around Bluewater and the A2. 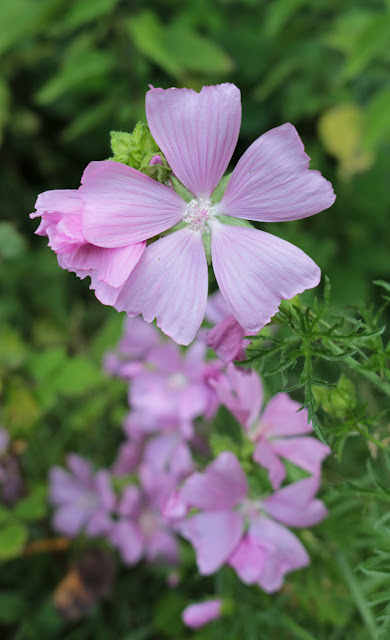 At the back edge of one field was a chalk grass bank, full of chalk loving species of wildflowers, giving me plenty of records. Among them were a few Musk Mallows, an impressive, beautiful wildflower. 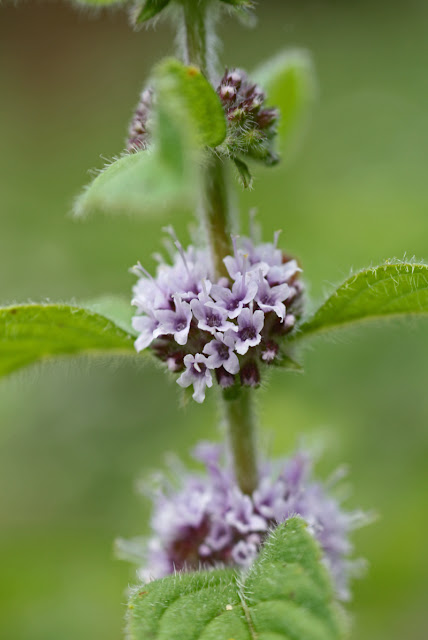 In places away from the field edges were patches of Corn Mint. Once common, it is now declining rapidly, so it's now on the Kent Rare Plants Register (RPR). 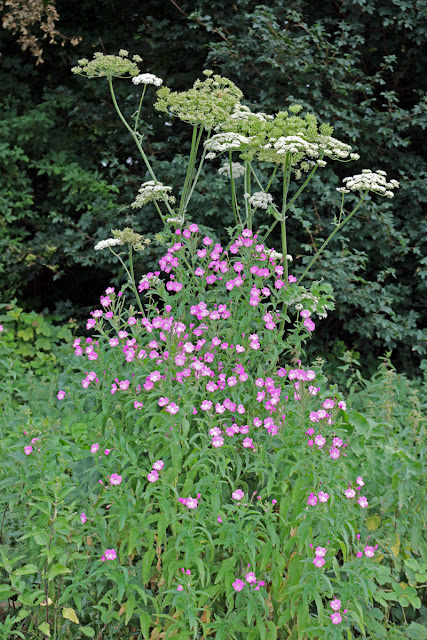 I thought these Great Willowherbs looked good against the Hogweed. 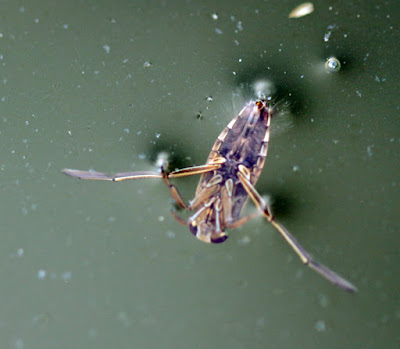 In the next field was a large metal cattle drink. There were several Water Boatman type beetles in it, no doubt feasting on the numerous mosquito larvae always present in standing water. 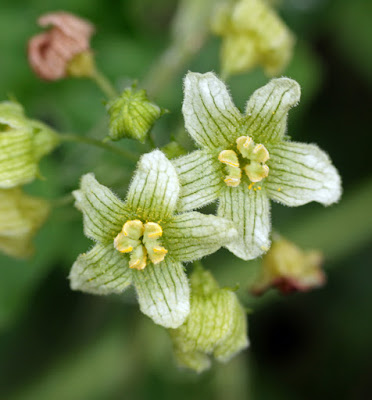 As I recorded bushes and trees that I could identify in the hedgerows I noticed White Bryony, a long scrambling climber of a plant with big leaves, strong curled tendrils and small white flowers.
These flowers don't actually have petals, the green streaked parts are sepals. 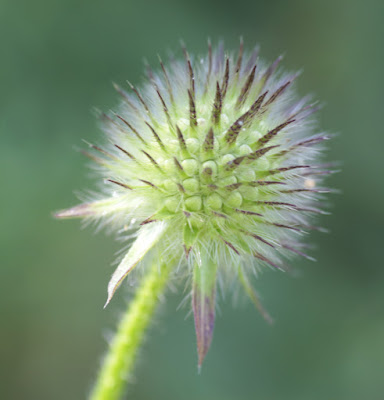 This is the flower head of a Small Teasel, another RPR species. I had found them in seed last Autumn and hoped they would be in flower now, but alas, they were still in bud.

Despite their name they are not small, often growing to around 5-6' tall. The flowers aren't small either, but smaller than Wild Teasel. Though similar to a degree, Wild Teasel has different leaves and flower structure. 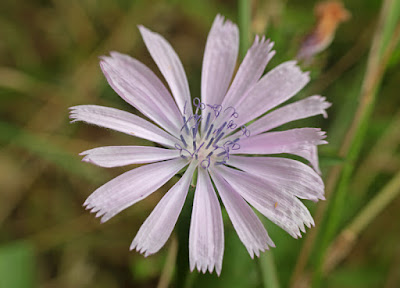 Chickory is another RPR species, yet it is relatively common in North Kent. I don't know why, perhaps it used to be in cultivation in this area in the distant past? 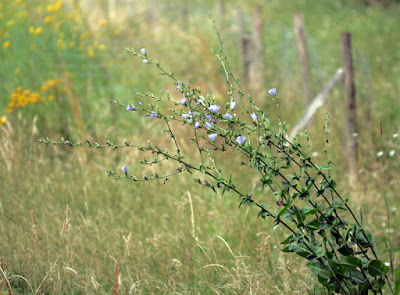 There are thousands of flowering plants by the B260 on Darenth Commons, one of the few flowers the council mows around and not over. 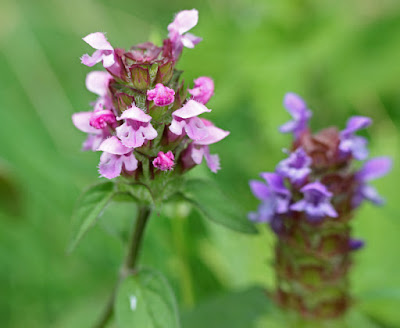 This is a pink colour form of Selfheal with the usual colouring behind it. I saw thousands of the usual form on my walk, but just two pink ones. 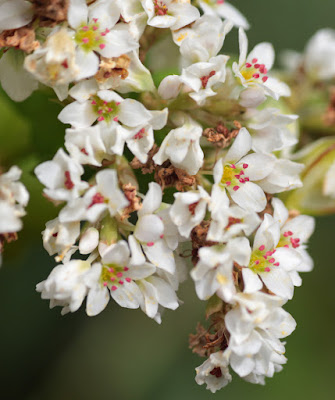 This plant had me baffled as I'd not seen it before. The leaves were odd and I couldn't find it in my books when I got home later. It was identified for me on Twitter as Buckwheat, a left over from cultivation many years ago, or possibly planted as ground cover for game birds (see first picture in this blog). 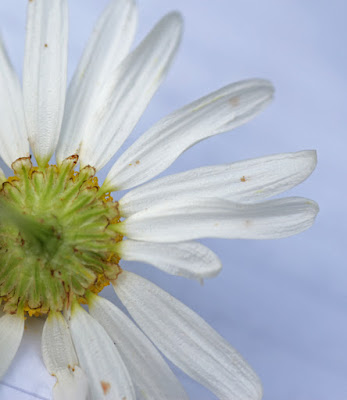 Of course, in any field, even sprayed ones, you are likely to find Scentless Mayweed, a Daisy type flower. Unfortunately there are several species that all look superficially the same. There are several ways to tell them apart. Smell or lack of it is a good start, but the colour of the tips of the bracts under the flowers help enormously. 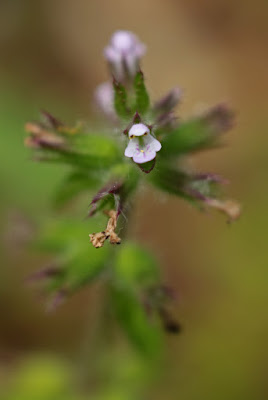 This is Field Woundwort, another RPR species, however, I'm convinced it was sown as part of a wildflower mix for game cover. It's a small plant with tiny flowers. 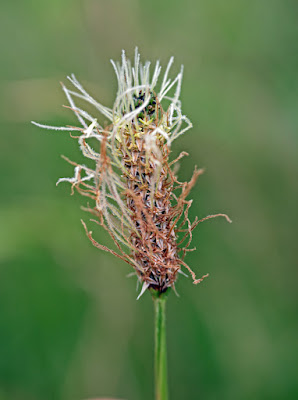 This doesn't look like much does it! However, it's the flower of Hoary Plantain, another RPR species. There's only 4 inland Plantains, so it doesn't take long to work out which is which. 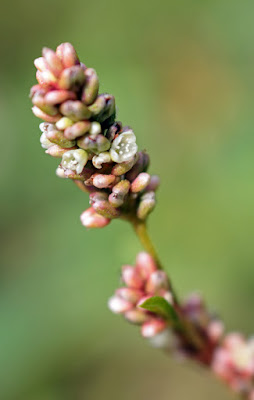 The final plant I photographed was a very common "weed" of fields and towns alike, the Redshank. What looks from a distance like a reasonable sized pink flower is actually a head comprising of numerous tiny flowers.

That was it for my recording walk around Meopham. I ended up recording in 4 monads all in all, so submitted well over 100 records. All good for the next BSBI atlas of the UK Flora and possibly an updated Kent Flora as well in the future.