- August 21, 2016
This OS square is under recorded, probably because much of it is taken up by the A2/M2 interchange with the HS1 railway going through it as well. However, there are some paths and areas to explore, which I what I did this day. I was fortunate enough to record 129 new records for this monad. I didn't get the camera out too often, but the following is what I did photograph.

This is Common Fleabane, a plant that actually is Common and can be found on wasteground, shingle, dunes, road verges, just about anywhere really. Their leaves are light green and hairy giving it a silvery appearance, making them easy to identify. 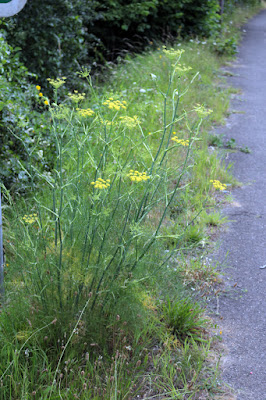 Even alongside roads you can find wildflowers, such as this Fennel, with its fine, thread like leaves and umbels of yellow flowers making it very distinctive. 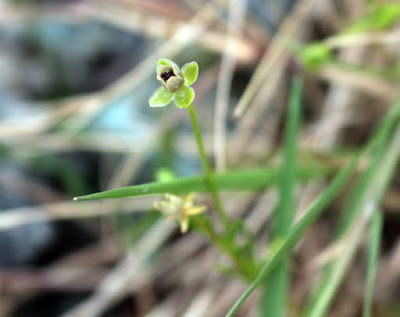 Another plant that can be found anywhere the soil is poor, such as in pavement cracks, is this Annual Pearlwort, a very tiny plant with really small flowers. From a standing height it looks like a bit of grass. 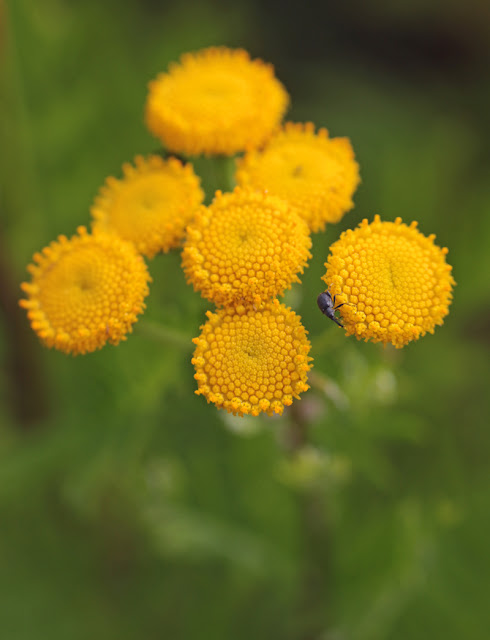 This is Tansy, quite a tall plant with rayless daisy like flowers. The leaves are very distinctive as well, it can't really be anything else.

There's a tiny black Weevil on it that I never did identify due to a lack of time. 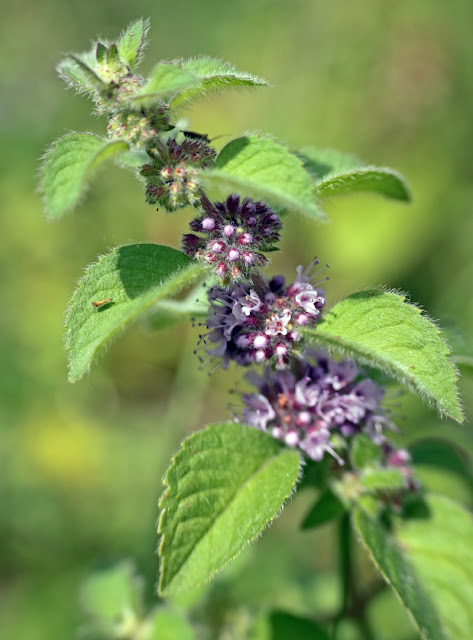 In one place was a small area of chalk grassland where I was able to record many chalk loving species like Marjoram and Wild Thyme.

Amongst them were several Corm Mint plants, an RPR species for Kent.


In a previous trip (where I didn't record) I found Bee Orchid and Common Spotted Orchids here as well. 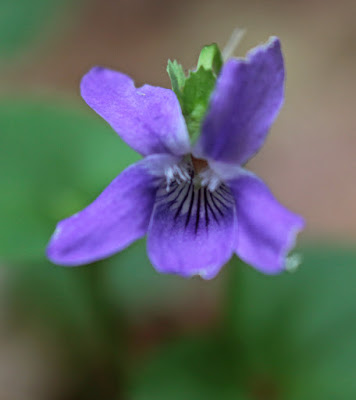 Off this grassy area was a small woodland with a dense canopy overhead. Not much grew under it, but in places where the canopy was a bit thinner, I found several Common Dog Violets in flower. These flower en masse in early Spring, but some will flower again at this time of the year if conditions are right.

The various Violets can be tricky to identify, so always check the shape, colour and size of the spur and sepals, leaves and rosette. Don't just look at the flower, as they can all look surprisingly similar.

Here's the fruit of the Sweet Chestnut that covered much of this area. Planted in vast numbers hundreds of years ago to help power industry, they are still grown now and coppiced every 15 years or so to provide materials for a range of products. Not to mention that roasted Sweet Chestnuts are lovely to eat come the Autumn. 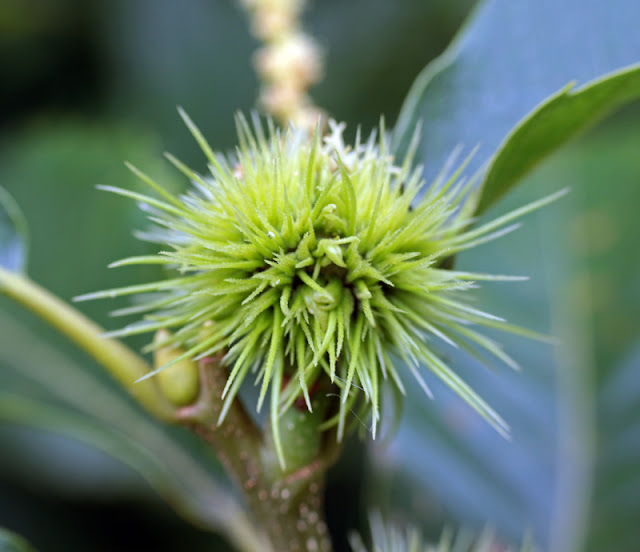 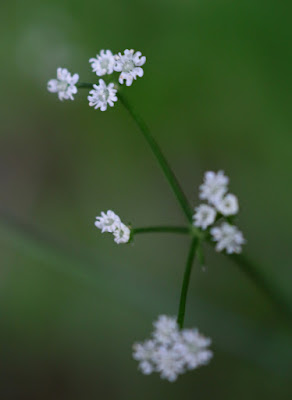 As I came back into the open again, I found several of these tiny flowers in the wooded edges. There's not many umbellifers that have tiny umbels of different lengths. I suspected this to be Stone Parsley, and there's one very easy way to double check your suspicions.
Break a bit off and smell it!
If it smells like petrol or diesel fuel, then it's Stone Parsley and this one was quite pungent to the nose! 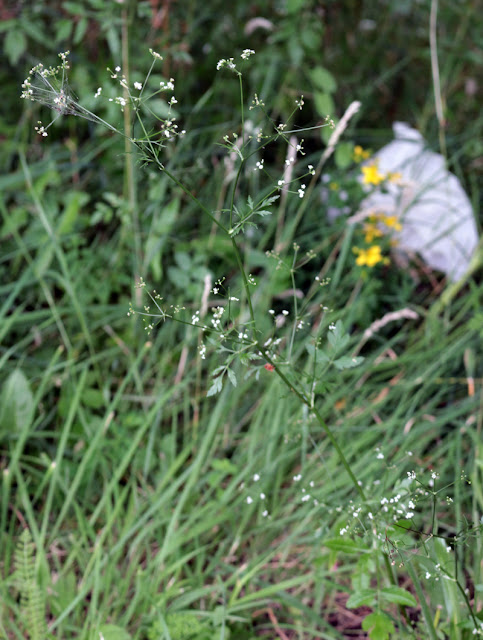 Here's a photo of the whole plant. Although similar to Cow Parsley or one of the Chervils, it is actually quite distinctive, with thin spindly umbels and very few flowers in each. 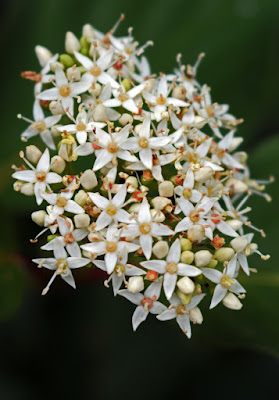 Dogwood, which is a shrub, was also coming into flower in the hedgerows. They actually have a reasonable scent, unlike Hawthorn or Elder for example, which smell quite rank!
In Winter they can be distinguished by their red twigs. 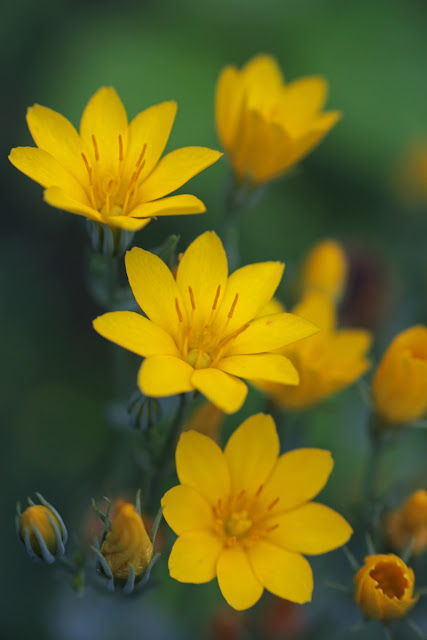 Another patch of chalk grassland revealed several Yellow-worts in their full glory. Their flowers only open in full sun and close by mid afternoon. 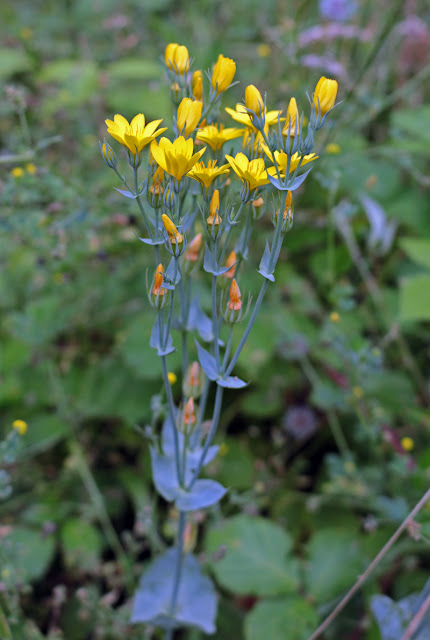 Here's a photo of the whole plant. The flower stems appear to go straight through the centre of the leaves, which themselves look a light silvery green. 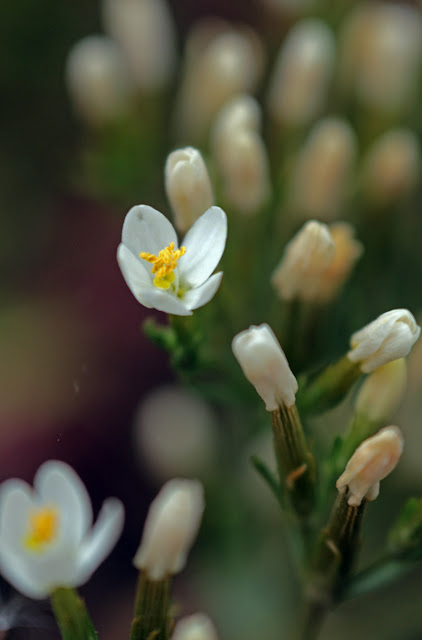 Another common plant on chalk is Common Centaury with lovely displays of pink flowers. However, for some reason, I found many in this area that had completely white petals. 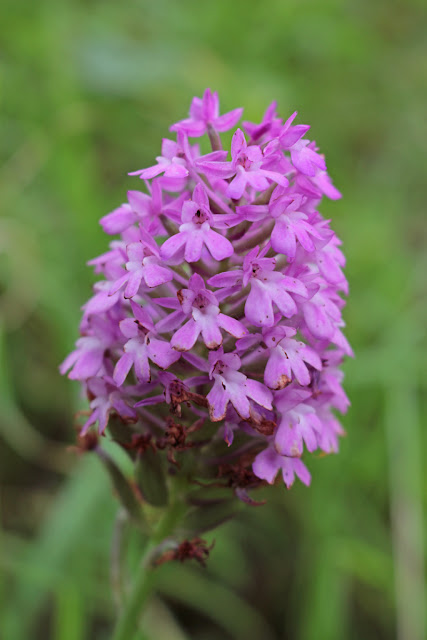 I was pleasantly surprised to find a couple of Pyramidal Orchids with most of the flowers still going strong.  At other places I've been to lately, they have all gone to seed.

Up until now I hadn't found anything particularly rare, until I came to this spot, an entrance to a hilltop reservoir. What on earth could be here that could be rare? What I found is actually within this photo but was so small you can't see it. 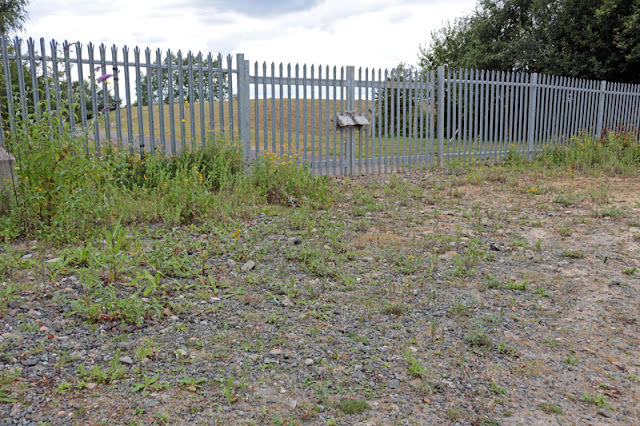 And here it is, Common Cudweed, the photo below is the biggest ones in the colony which numbered 20 plus. It's another one of those plants with the name "Common" that are now very rare, especially in Kent. 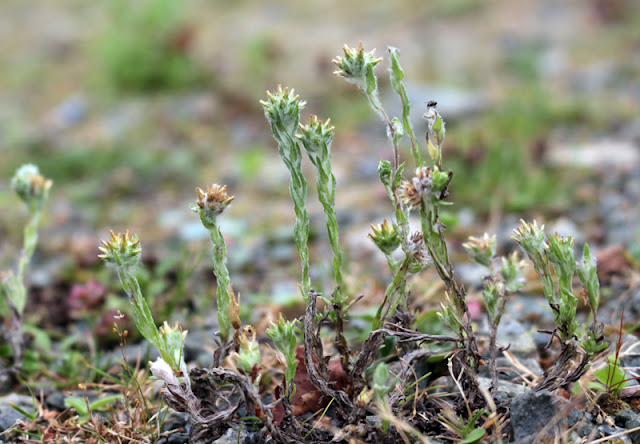 At first I thought I had found the even rarer Broad-leaved Cudweed. Cudweeds are a hard group of plants to tell apart, mainly because most are so small. However, @Ranscombe_Farm kindly helped me identify them for sure as Common Cudweed.

Here's what most of them looked like, less than 2" tall. A great species to find in an under recorded square.

Since finding this, I have also found Small Cudweed (F. minima) at another site, but this time asked my County Recorder for help with the ID!

That was about it, a worthwhile few hours recording what I had found. The records will end up via my County Recorder, going into the BSBI database, which is an important long term tool for identifying trends over time, both good and bad.