- August 29, 2016
Holly Hill is a large area on the chalk hilltops of the North Downs just West of the Medway Gap. There's a mix of pristine chalk grassland and remnants of ancient woodland. There's always something amazing to see here, if only for the views South and East. Don't be fooled by going into the woods by the Holly Hill car park, there's not much to see there. Instead, walk back along the road to Birling Hill, cross that road and the chalk grassland opens up before you. 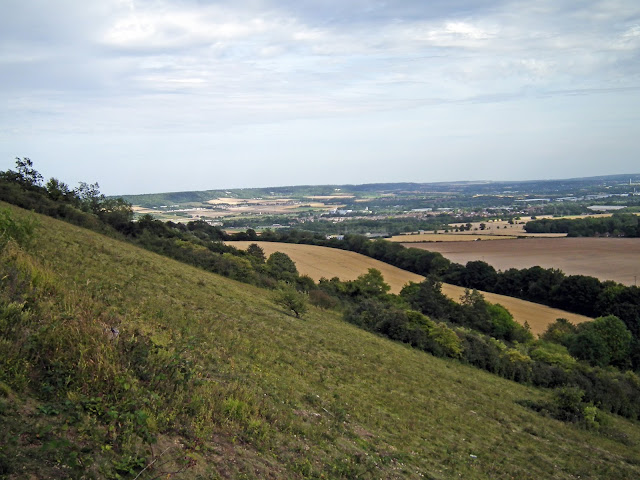 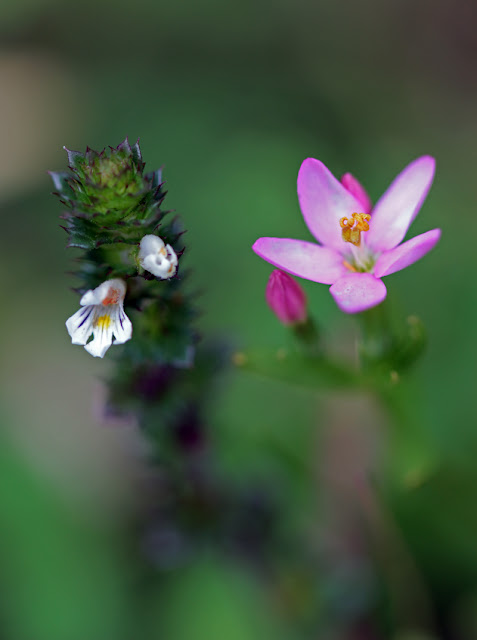 As you enter you don't know where to look first, flowers, butterflies and bees everywhere.

However if you are planning a visit, I am writing this 3 weeks later and by now most flowers will have by now gone to seed.

I'd just walked in from the road and found this Eyebright and Common Centaury growing together. 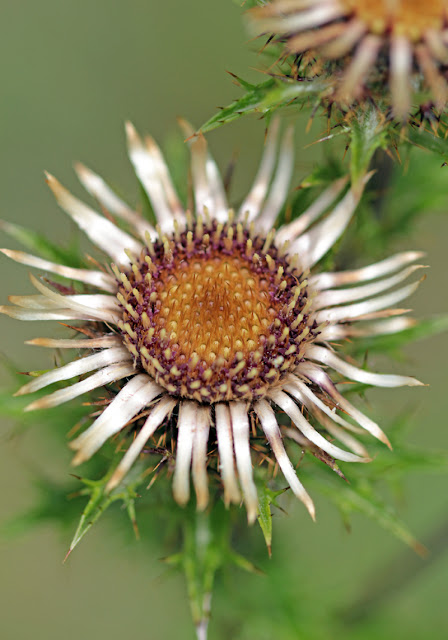 Carline Thistles love the chalk, but from standing height they look, well, rather dead! Look closer and you may see a ring of tiny purple flowers. Bees certainly like them.
Due to habitat loss, this species is now on the Kent RPR.
They can also be found in shingle/sandy habitats such as at Dungeness. 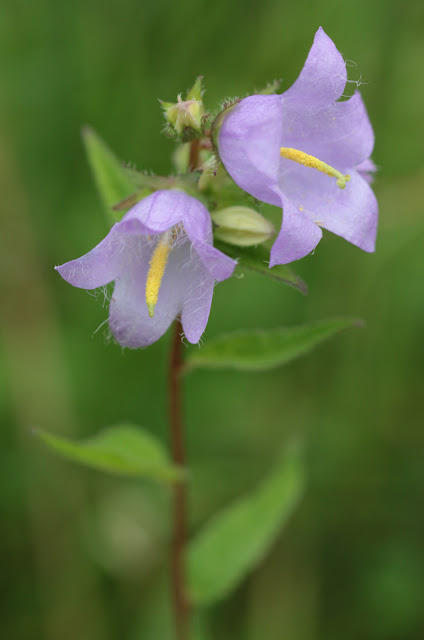 The Harebells were out now, only about 6-8" tall, but always bobbing back and forth in the slightest breeze. This day was actually windy so it was quite a challenge to get any photos.
For those interested, the camera was set at 1000th of a second on f2.8, auto ISO.
You still have to wait for a lull in the breeze though!

These are very common around the UK but again dying out in Kent, another RPR species. 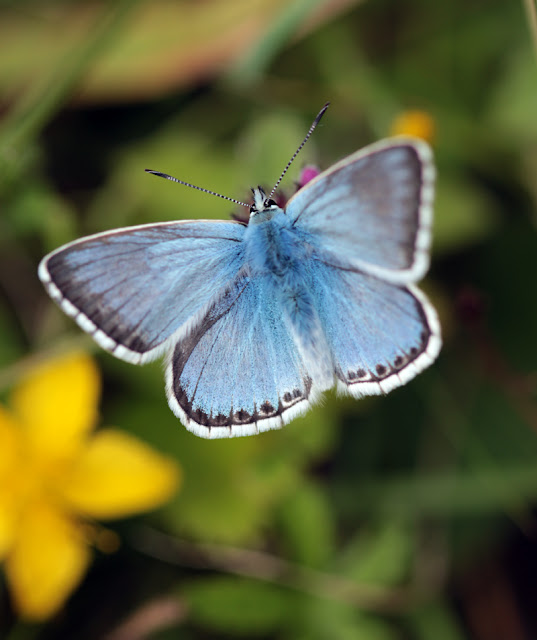 I was on a chalk hill, so it was rather fitting to find numerous Chalkhill Blue butterflies on the wing. My favourite blue butterfly. 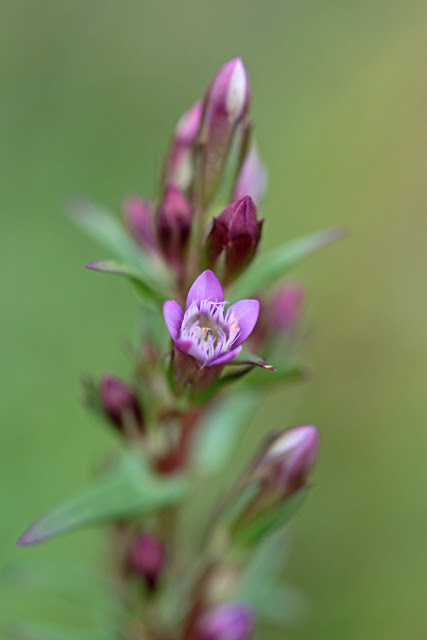 Next was a single flowering Autumn Gentian, a beautiful wildflower with cup like pink flowers filled with fronds of white.

I spotted numerous plants in bud but only the one with open flowers. They should be at their peak at the time of writing (29-08-16) 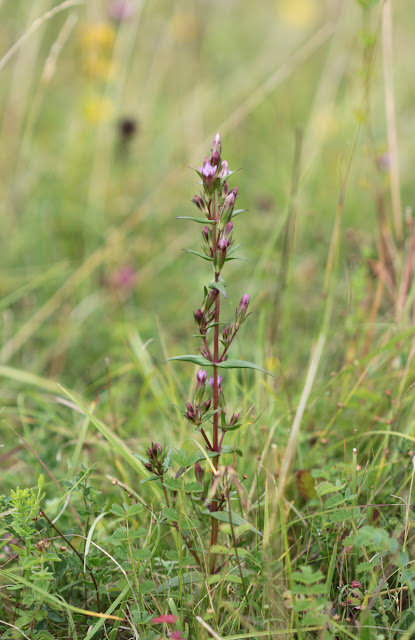 Again these are on Kent's RPR list of rare species. 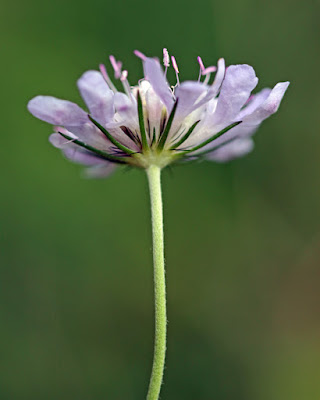 For Harry Potter fans only: 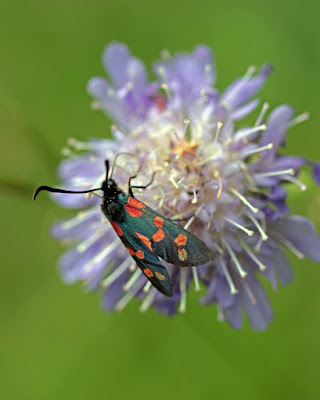 And here is the flower head of Small Scabious, a big hit with Six Spot Burnet Moths which fly in the daytime. A bright eye catching moth, they're not fussy which flower they feed on. You can find them hatching from long strands of dead grass stems. This is an important consideration when hay cutting, to leave some grasses standing for those insects that need them. Don't cut all of it every year is what I'm trying to say! 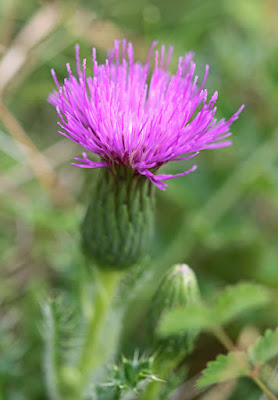 Whenever you sit down for a rest on chalk downland turf, you always sit on an unseen thistle. Well, here is the culprit, the Dwarf Thistle, the flower spike rarely growing more than a few inches tall. However, at this time of the year, the hillside was dotted with these delightful purple flowers. 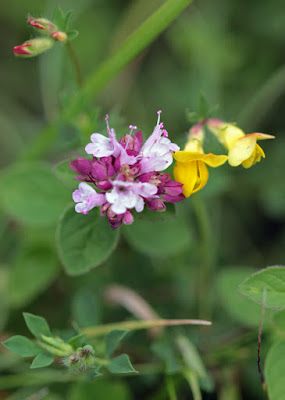 Another flower combination presented itself, this time the pinks of Large Thyme with the bright yellow Common Birdsfoot Trefoil. 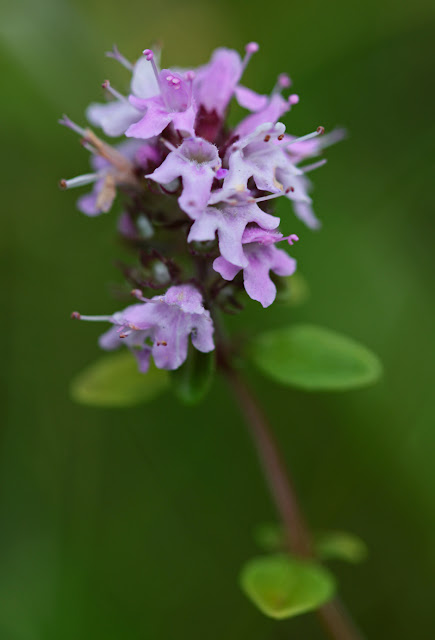 There was plenty of Large Thyme in flower. It's actually very small, no more than 5-6" tall but still bigger than Wild Thyme. There's several differences between these two species, I think I have detailed some in previous blogs. 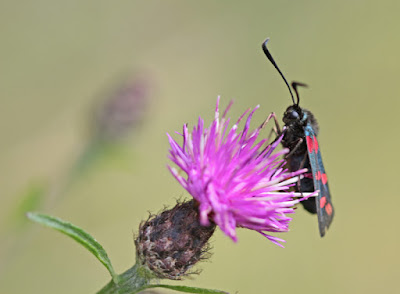 Common Knapweed is flowering now in abundance all over the country. This shot was photobombed by another 6 Spot Burnet Moth.

That was it for the chalk grassland, though there was a lot more to see, but time was pressing, so we moved on.
A few years ago, I found an unrecorded colony of Violet Helleborines  in a wood not far from Holly Hill, so we decided to go and see how they were doing, or even if they were still there. Living in Kent, you never know if something you saw last year will be there the following year due to any number of factors, from grazing to being built on! 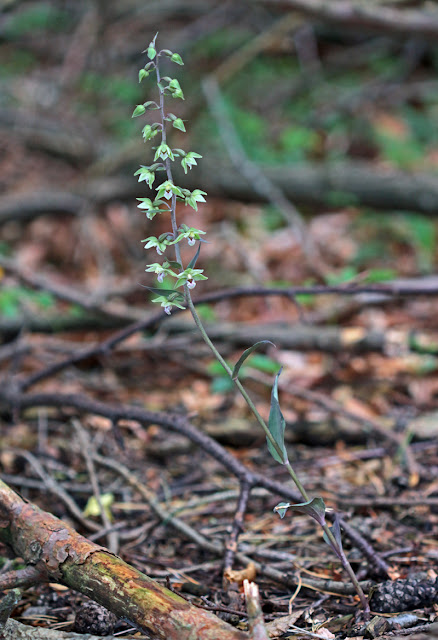 We needn't have worried, as there were plenty up, though a few down from our last visit.
Deer have a habit of eating the flowering tips before they open, but these seemed to have escaped this year.

They tend to grow in deep shade where not much else grows, making photography rather difficult to say the least.

Note how the leaves are narrow, making it very easy to separate from the superficially similar Broad-leaved Helleborine. 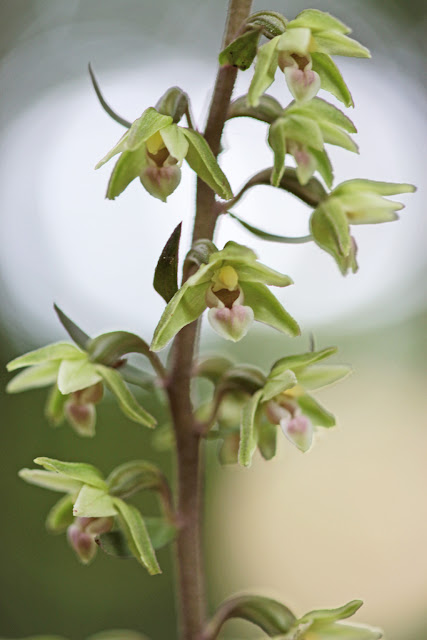 These are wild orchids, please do not pick, dig up or trample them. They're not endangered yet, but it wouldn't take much to make them so.


I'll leave you with a close up shot of these delightful wildflowers. In Kent these are the second to last wild orchid to flower, with Autumn Ladies Tresses following on soon. 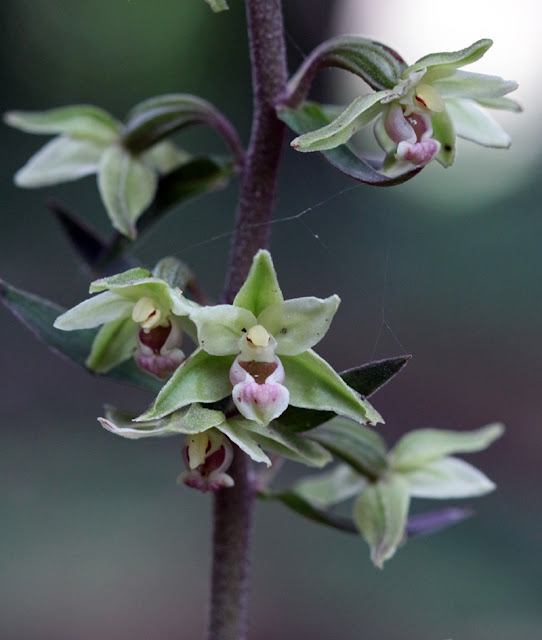