- April 30, 2017
I'm falling behind writing my blogs, having discarded several short trips with interesting flowers as they will now be well out of date. Much of my spare time is spent recording all wild plants (that I can name) for the BSBI 2020 Atlas. There's a lot of under-recorded 1km square grid squares (monads) and even those that are well recorded need visiting now to record all the Spring flowers. 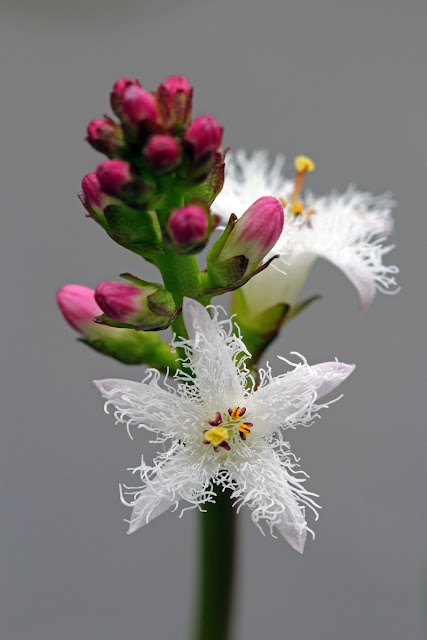 Anyway, I took a break from recording to venture into East Sussex. On the way we stopped at Matfield village pond in West Kent where I found the Bogbean well and truly in flower. They are a delightful, delicate flower and I wonder how they came to get such a name as Bogbean! 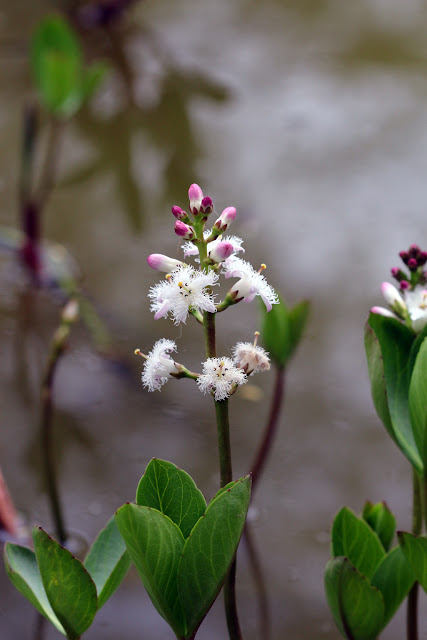 
The next stop was Scotney Castle which I thought was in Kent, but botanically the house and castle are in Sussex . Not unusually I found Ivy-Leaved Toadflax on the old walls, however, finding an all white form was unusual, they're usually pink. 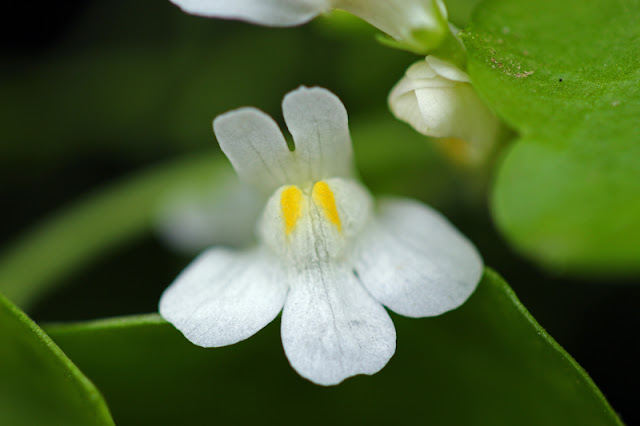 I'm not a big fan of ornamental gardens, but there were some nice views. This place attracts thousands of people from all over, every year. 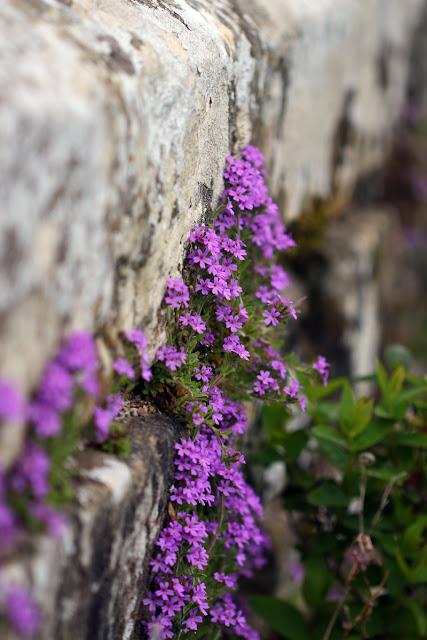 Fairy Foxglove has naturalised on the old stonework of the bridge connecting the old castle to the estate over the moat. It's not a plant I've seen anywhere else, which by its scientific name isn't surprising. I guess it's a mountain plant.

Look down and you'll often see Rudd and a large Pike in the weedy waters below. 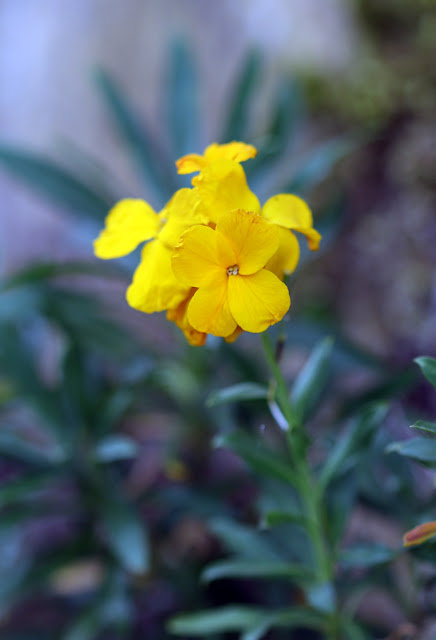 On the ruins of the old house were plenty of naturalised Wallflowers. 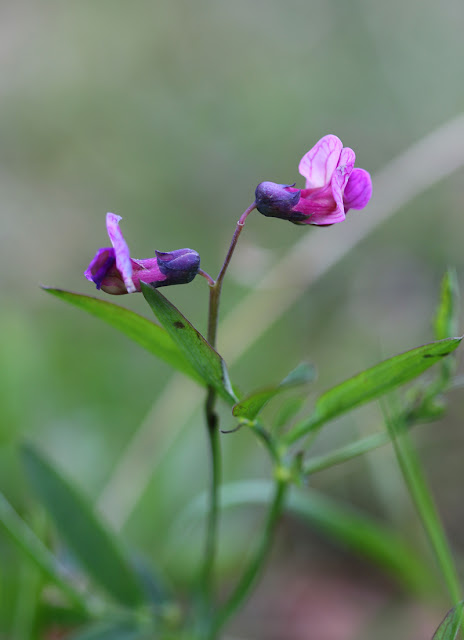 I then literally stumbled on a special wildflower that I must have missed lots of times (I had to stop to tie a lace).

Between the lake and the stream behind were numerous of these beautiful Bitter Vetch.


I had seen them on a Kent Botanical Reording Group meeting last year on the approach road to Scotney, but never noticed them here before. 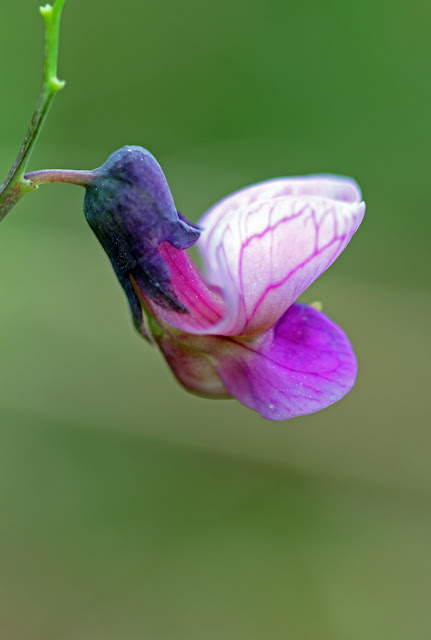 
They have a great colour scheme and are one of my favourites of the Vetches found in the South East. 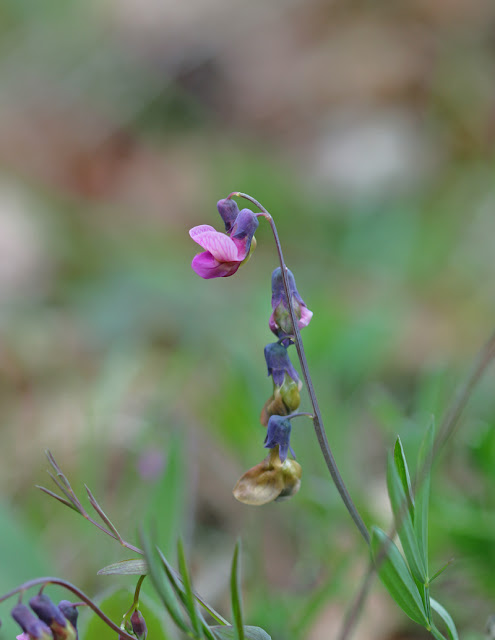 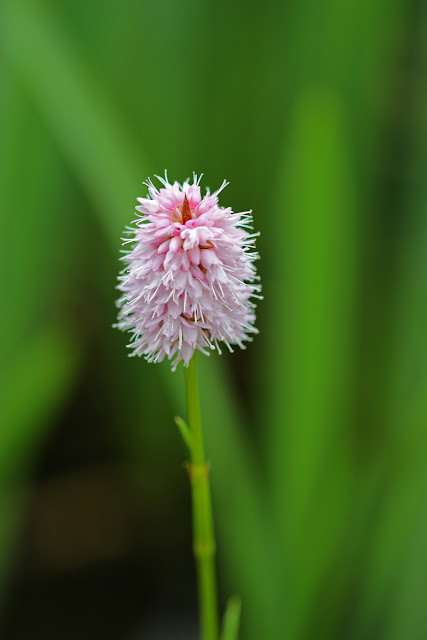 Near the lake in another area was Common Bistort. It's so common I've never seen it before.

It is a native plant, but I think this would have been planted, being on a prestigious estate and all.

I usually only see Amphibious Bistort, which is thin and dull in comparison to this!

In amongst the flowering ornamenals (which I rarely photograph) I found some nice Red Campion.
Pink forms can be hybrids between the red and white types, but I don't really know how to tell them apart (yet). 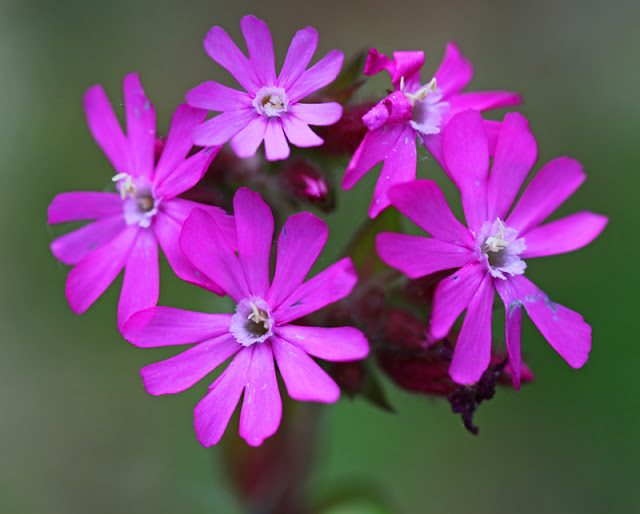 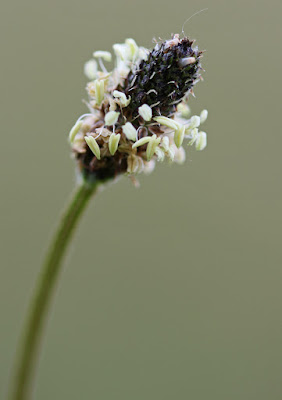 In the grasses, the first of the Plantains was in flower, this is Ribwort Plantain, a very common species.

In Winter, it's veined rosettes are often mistaken for orchid rosettes.


Back up by the house was a first for me, Subterraneum Clover. It's really really tiny, but the easiest way to tell it is the black marks on its leaves and the pale cream/white flowers. It's easier in seed as they loop over and bury themselves in the ground, hence their name. Thanks to Owen Leyshon for info on where to find them. This is another plant I must have walked past many times without spotting. It just goes to show that there really is always something new to see. 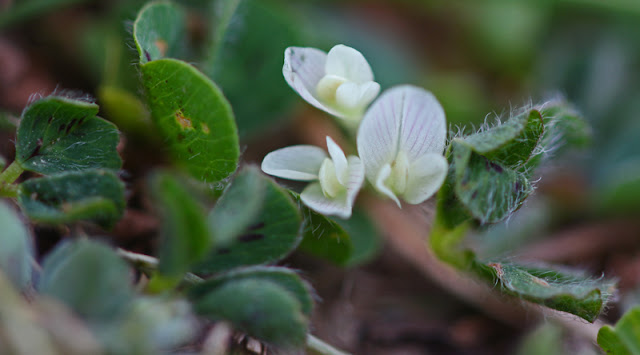 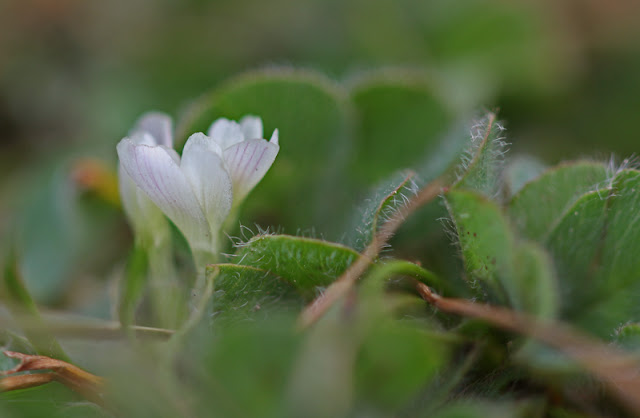 I was saving the best to last, heading for the house lawns which are now designated an SSSI acid/neutral grassland. It is home to Heath Milkwort, Field Wood-Rush and other lovely little flowers, but in flower now were these beautiful Green Winged Orchids. 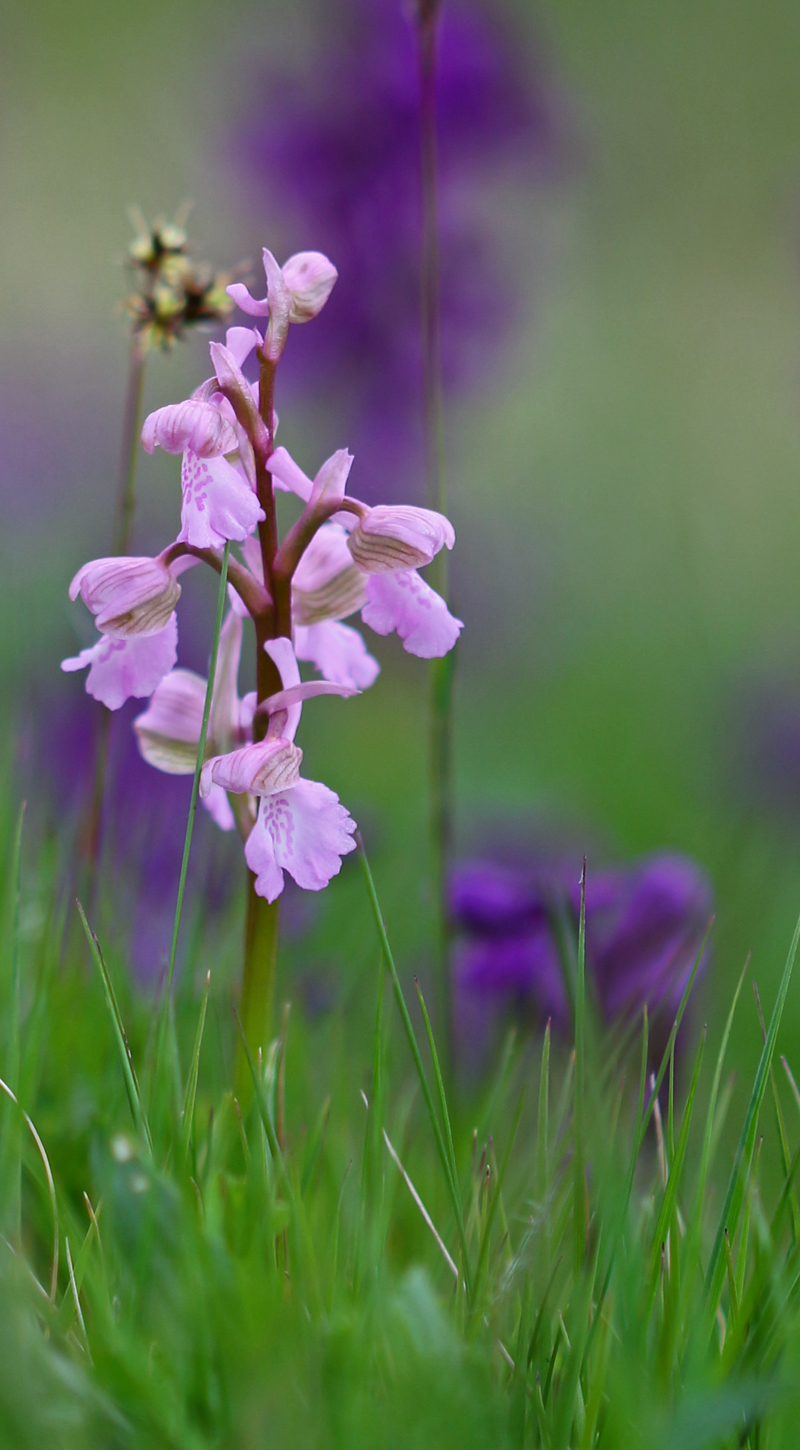 There's a few hundred on this lawn alone and it is now managed to help them thrive, well done National Trust. A few Green Winged Orchids are also appearing on the estate grassland, let's hope active grazing management will increase their numbers there as well. 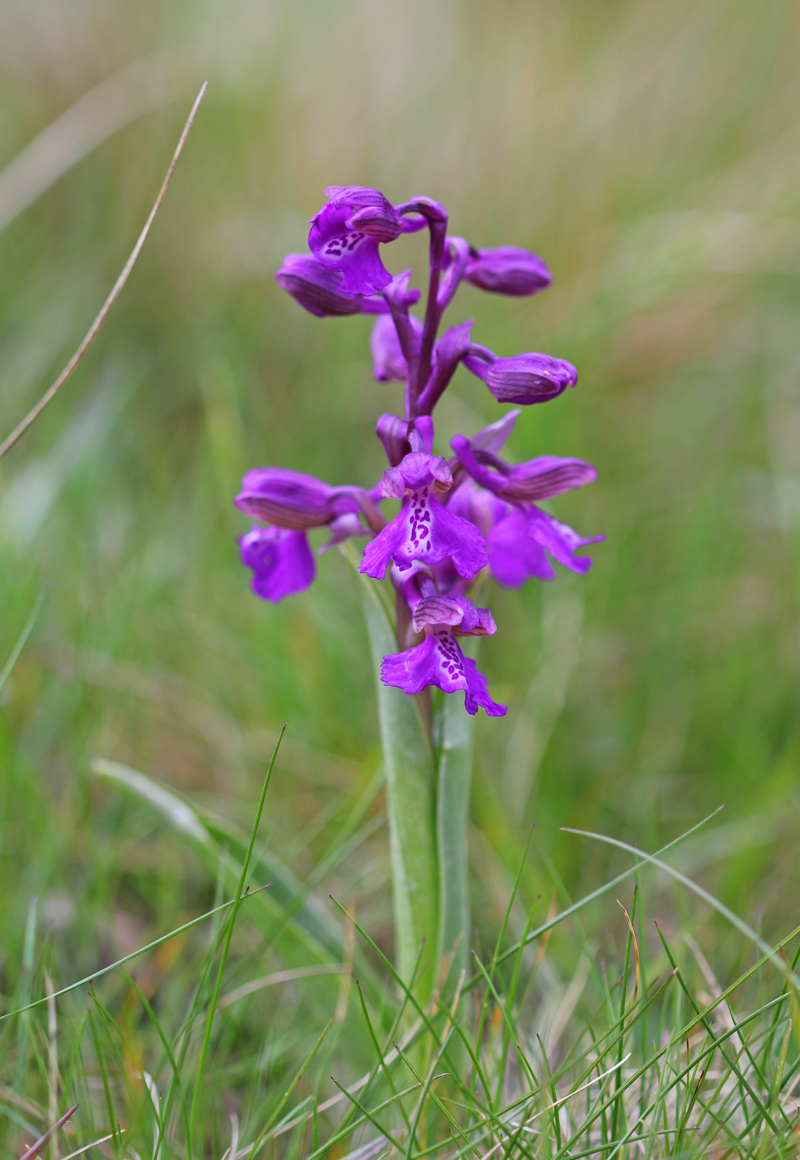 We had lunch then went off for a drive to Bayham Abbey nearby. It's ruins are impressive and with a bit of imagination, perhaps one can feel a bit like those of old who lived here.

Unfortunately, most of the old walls had been sprayed meaning for me there wasn't much to see. I had been hoping to see Rue-Leaved Saxifrage and perhaps a Fine-Leaved Sandwort or two! 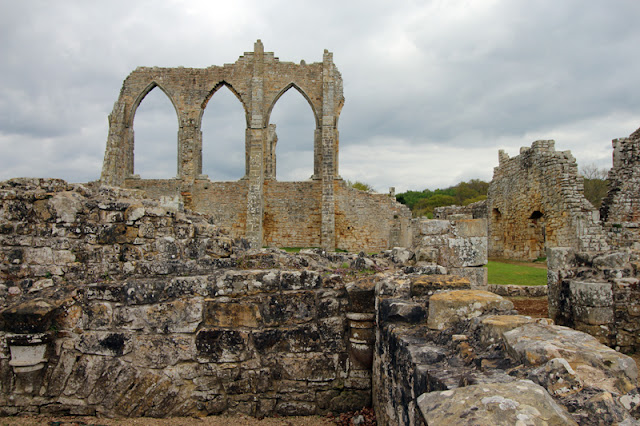 Down by the river was a leftover from those Victorian collecting days, a Giant Hogweed. These can be extremely dangerous so never touch them. They can make the skin burn and blister on contact and then carry on doing so every time you are exposed to the sun - for months afterwards!
Perhaps the Victorians should have left this one where they found it? 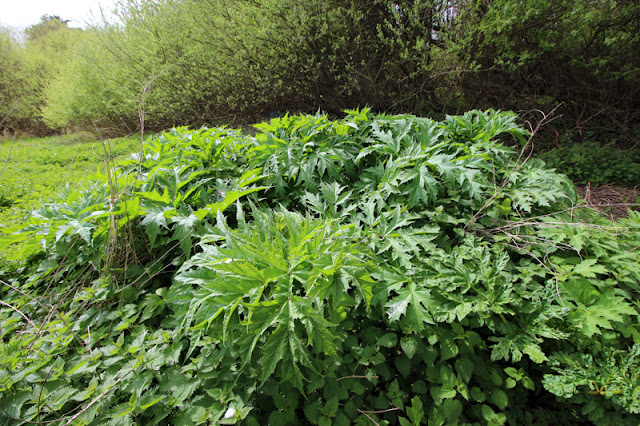 We left here and had a slow, pleasant drive through some very tiny East Sussex lanes. Unlike much of Kent, not once did I have traffic come up impatiently behind me, so I was able to drive quite slowly and see the flowers on the verges - which were numerous.

I was incredibly surprised to see the next flower below. But on a shady verge with steep banks, dotted with Greater Stichwort and Primroses were these wonderful Coralroot flowers. Stunning and unexpected! 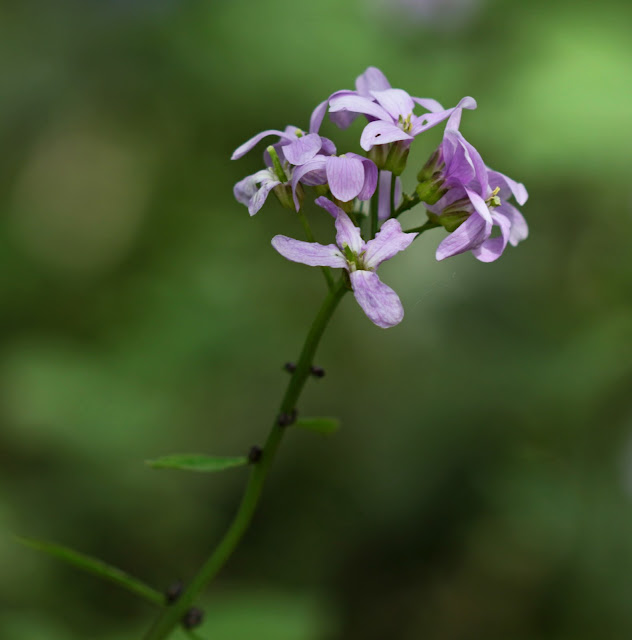 After a while, and by now I didn't really know where I was, we stopped at an old church and stretched our legs. At the back of the cemetery was a small stream and remnant woodland, within which were around 100 Early Purple Orchids, what a lovely surprise leg stretch! It proves you don't need to go to wildlife reserves to see these, just get out and about and explore!

After another leisurely drive, we stumbled across Netherfield high Wood, a wonderful place that I will return to, hopefully in June. 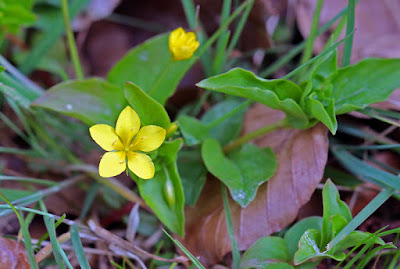 There was a large cut meadow with possibly 200 Early Purple Orchids flowering with Bluebells under trees on one edge. Within the meadow itself were hundreds of rosettes of Common or Heath spotted Orchids yet to flower.

There were plenty of these Yellow Pimpernels flowering in the shady areas. 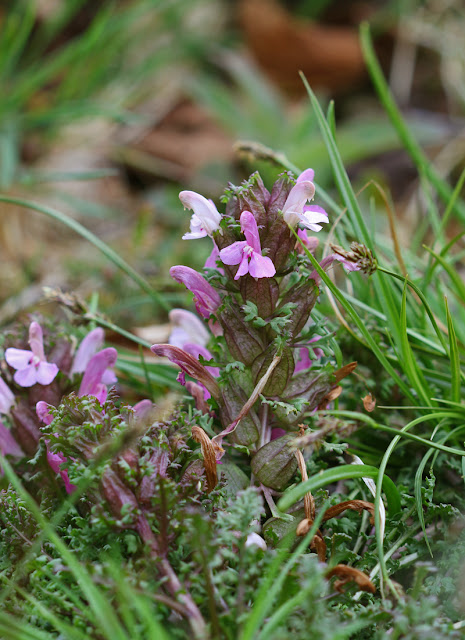 Further into the wood, I noticed numerous small pink flowers which at first I thought was Herb Robert. However, I saw more and more of them all over the place and realised they were nothing of the sort.

They were Lousewort, a parasitical plant that is very common in the West of the UK but rare in Kent. I don't know if they're rare in Sussex, but here there were hundreds of them.

That was about it photography wise for the day, obviously I saw many more flowers than shown, but I'll leave you with a view from the woodland car park, a beautiful Spring scene. 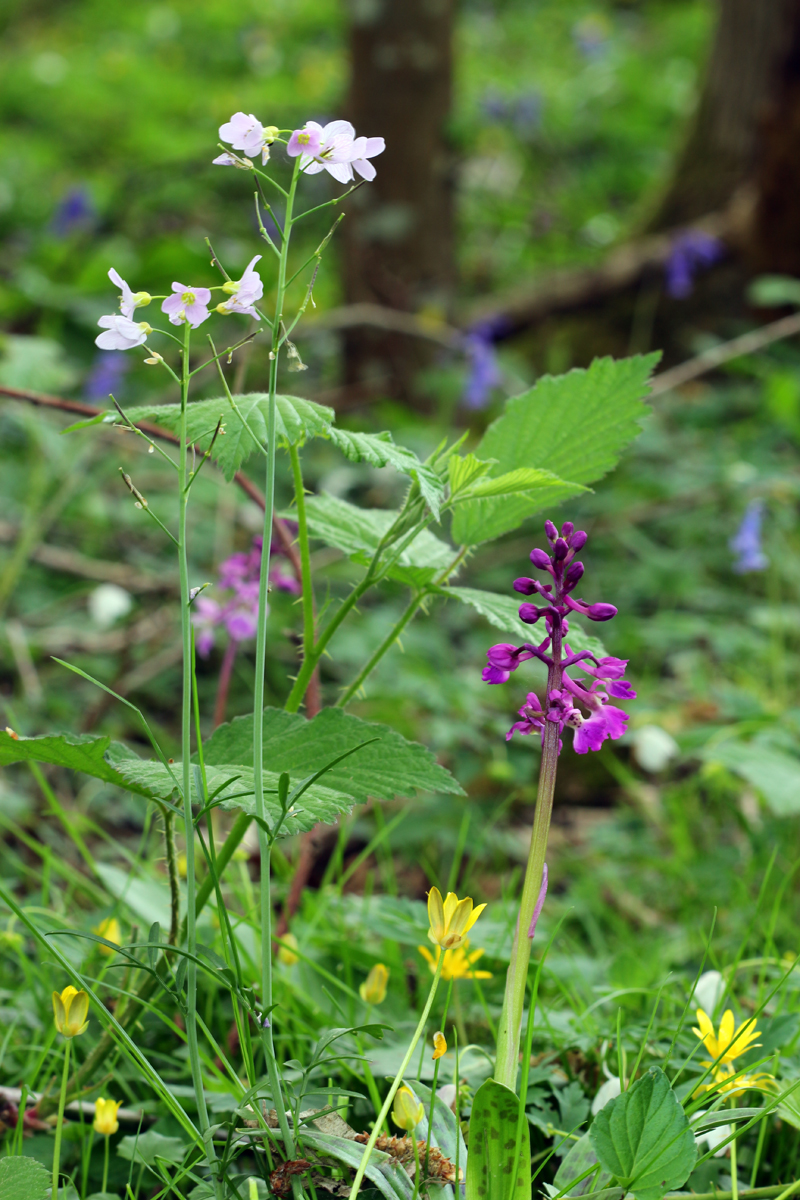