Much of my free time is now spent recording plants in under recorded OS 1km map squares in east and West Kent. This is for the BSBI 2010-2020 atlas, see http://bsbi.org/atlas-2020

However, I will still detour to see some special plants that may be well recorded and today was no exception. First stop was High Rocks Lane, near Tunbridge Wells, just Kent side of the botanical Sussex border to see Coralroot and hopefully Large Bittercress. 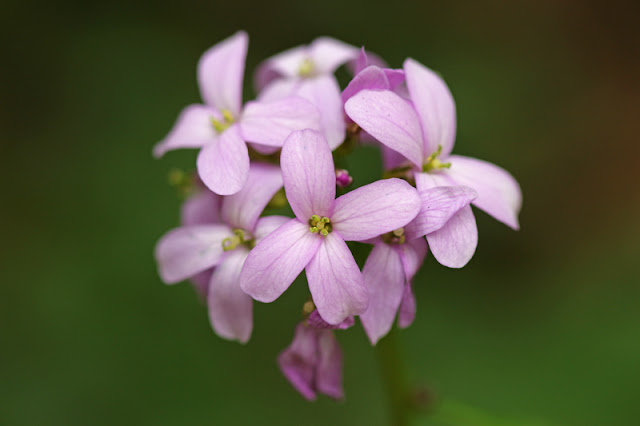 It didn't take long to find the coralroot. There are hundreds along the road verge and quite a few back from the road as well. 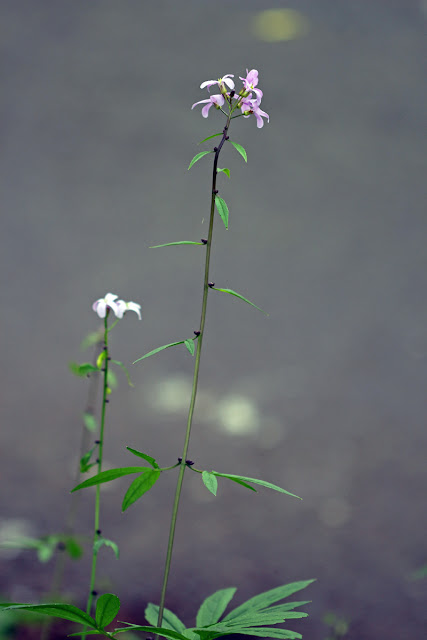 They are similar to Cuckooflowers that abound everywhere, but Coralroot mainly propogates by dropping bubils. Thus they don't easily spread. The flowers are a deeper pink with narrower petals and the leaves are quite different as well to cuckooflower.

In this photo you can easily see the bubils up the stem by each leaf node and also the leaves completely different to the pinnate forms on Cuckooflowers.

The grey background is the road!

Just off the road into some woods was a large patch of a pink variant of Wood Anemone. They are usually white. Interestingly they don't actually have any petals, what looks like them are its sepals. Energy saving tactic from the plant world! 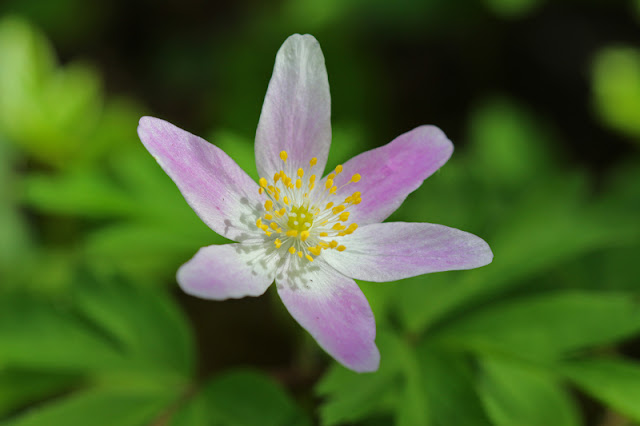 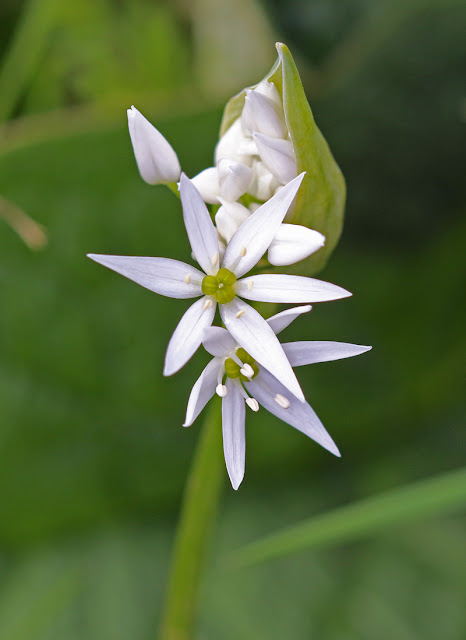 In damper areas were hundreds of Ramsons, a wild Garlic, coming into flower.

They can dominate an area as they are patch forming, but once conditions don't suit them, the colony abruptly ends.

As you walk among them the air fills with a stong garlic smell.

That was it for this venue. I couldn't find any Large Bittercress that had been flowering the year before. Perhaps I was too early for it?

From here I drove a short distance to the Speldhurst area to start recording. I almost walked past these small flowers assuming them to be Herb Robert.

They were growing down a by-way away from houses (but not that far away) and had spread down the lane. I eventually found them to be Malcolmia maritima, a garden type of pink that is fast escaping all over the South East (Stace). 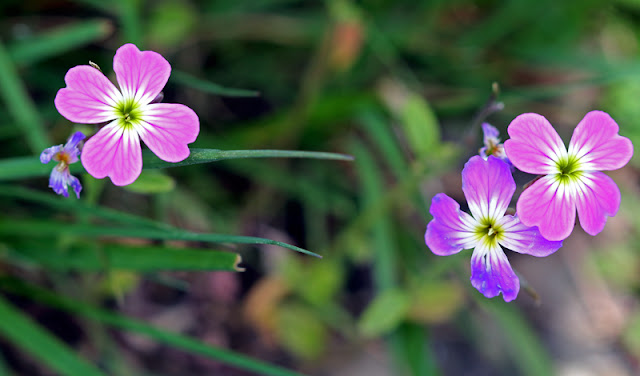 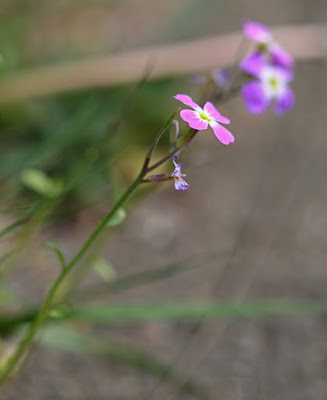 
When I started out in botany, it was a major committment to learn about wildflowers. Little did I realise then, that there are numerous garden escapes in the countryside that need identifying as well. 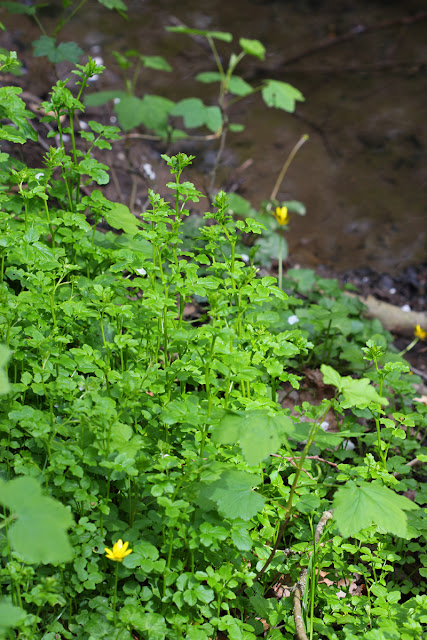 In a boggy area by a woodland stream I came across Large Bittercress, the flowers in bud but not yet open unfortunately.

The plant is about 4-5 times taller than its close relative Wavy Bittercress and the flowers are large in comparison with purple anthers.

Unfortunately this is the only one I found. 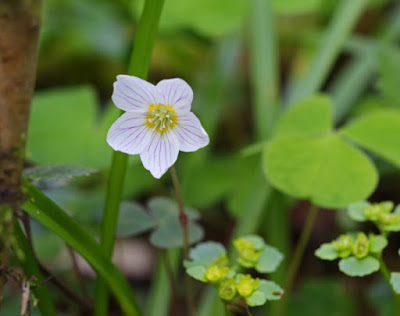 Patches of Wood Sorrel were common here, with a few still showing their beautiful flowers. 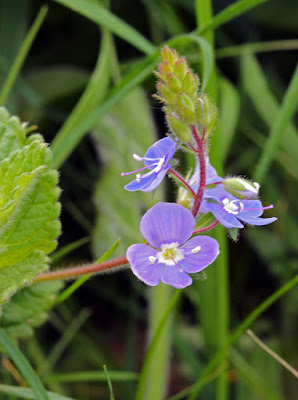 As I came out of the wood, Germander Speedwell was flowering. Just to confuse me young plants can be hairy all around the stem, making them look rather like Wood Speedwells.

however, the colours are almost always a deeper blue or mauve than Wood and once you get your eye in, it's quite easy to tell them apart at a glance.


Wild Strawberries were my next find. These are supposed to have overlapping petals (or no gaps) to differentiate them from Barren Strawberries. No-one told this plant that. A check on the glossy leaves with centre point poking out confirmed Wild Strawberry. 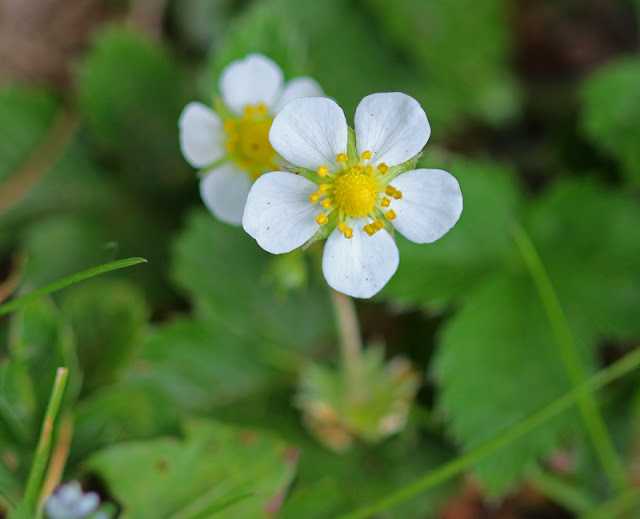 As I returned to a main road verge, I spotted numerous Bush Vetch in flower, the first so far (though since this visit I've seen well over a hundred in flower). 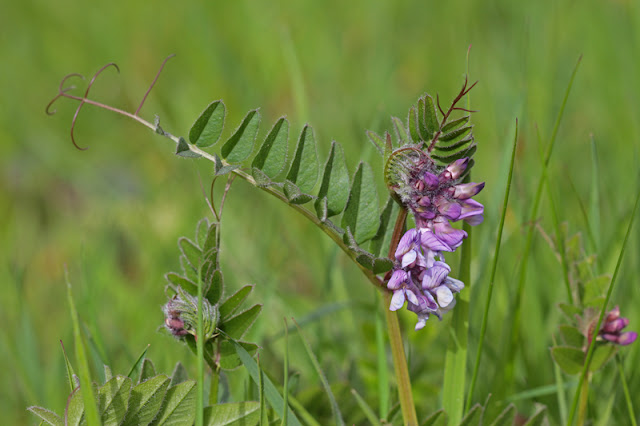 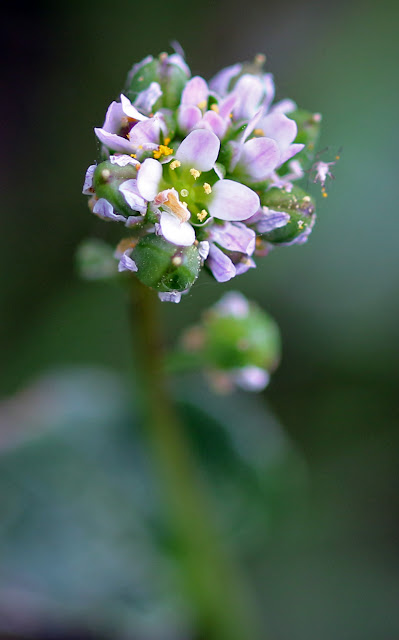 My final plant of the trip is a successful coloniser of salted inland roads. It is a coastal plant by nature and tolerates high levels of salt. As such, it can be found near the high tide line and splash zones around our coastline.


It is of course, Danish Scurvygrass. It has adapted to live on main road verges all around Kent (and elsewhere) due to Winter salting of the roads.

We have a cold snap forecast with some frosts for the coming week, but I have no doubt the Spring wildflowers will cope with it just fine.