- July 27, 2017
We spent a week on holiday in a lovely cottage near Penmon in Anglesey in the last week of June. It's the first proper holiday we've had in 10 years so we were really looking forward to it. Unfortunately, I came down ill just before leaving with a heart problem. However, despite making life difficult I was determined to make the best I could of the holiday.

After a long drive from Kent we arrived and after unpacking had a look around. This view was nearby from a local beach. The headland in the background is the Great Orme, a venue I was also keen to visit during our stay. 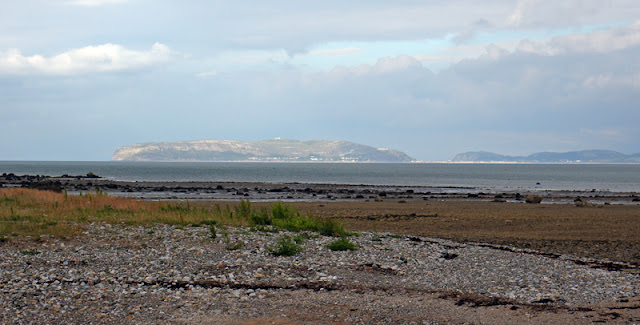 Of course, even with great views I had a look at plants growing along the beach. I found a Common Spotted Orchid flowering up a steep slope but couldn't get to it for a photograph. 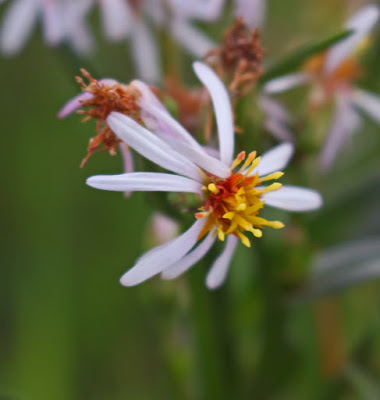 I also found Sea Aster, quite common in North Kent, but took a photo anyway.  I'm glad I did as I later found it was a new record for this area.

The photo wasn't too brilliant though. 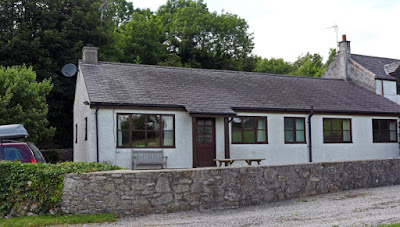 This was our cottage for the week, very nicely presented with lovely views across the Menai Strait to Snowdonia.

This was one of the views from the cottage, we didn't tire of looking at it, though later in the week, Snowdonia was covered in clouds.

Anyway, back to wildflowers!

The next day, we made our way to one of the amazing bogs on Anglesey, or more precisely fens, called Cors Bodeilio. It's in the middle of nowhere down some scarily narrow lanes. I could have botanised the centre of the road, it was full of flowers! 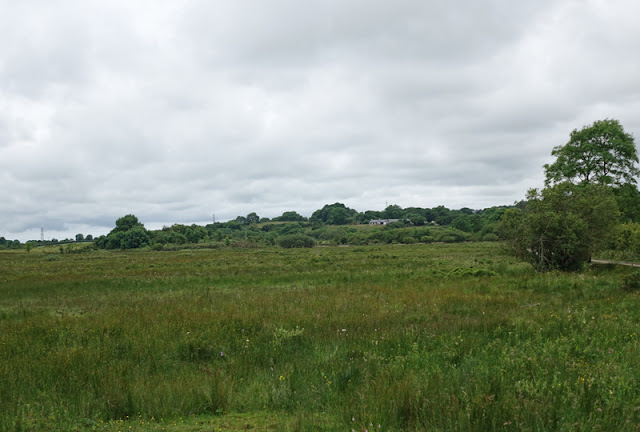 These fens are a mix of acid and alkaline habitats being a bog on limestone, which makes for a weird collection of plants (from a Kent perspective anyway).  I was concerned that I may be too late to see the renowned Marsh Orchids here, but explored anyway. 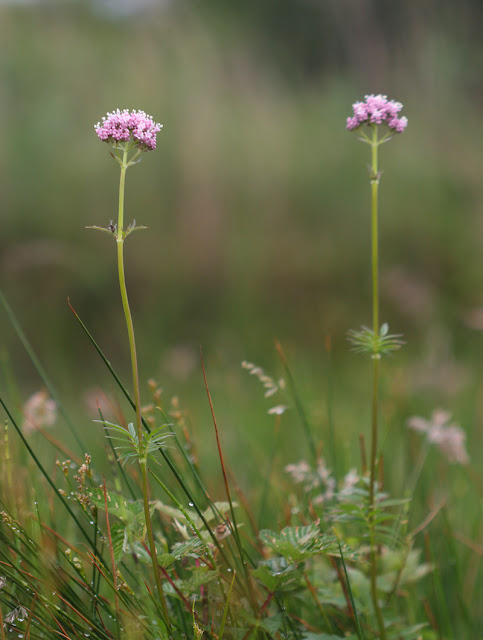 Being North Wales and Summer, it was of course raining, but undeterred, we put on our wet weather clothing (and wellies) and went exploring.

Very apparent, even by the car park, were numerous Common Valerians, a beautiful and stately looking plant. I don't know these aren't grown in gardens, they look great!


Bog Pimpernel were out here and there, but most were very bedraggled and half closed due to the rain. When I found some open enough to photograph I was pleasantly surprised by the end result with a frame of raindrops around the flower - quite unplanned and a happy coincidence. 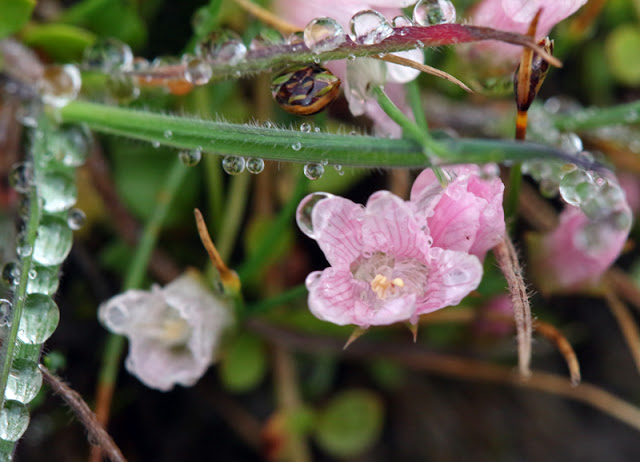 I found numerous Lesser Water-Plantains here as well, a rare plant in Kent and one I'd not seen before. The leaves are quite different to the big, broad ones of the usual common Water-plantain. 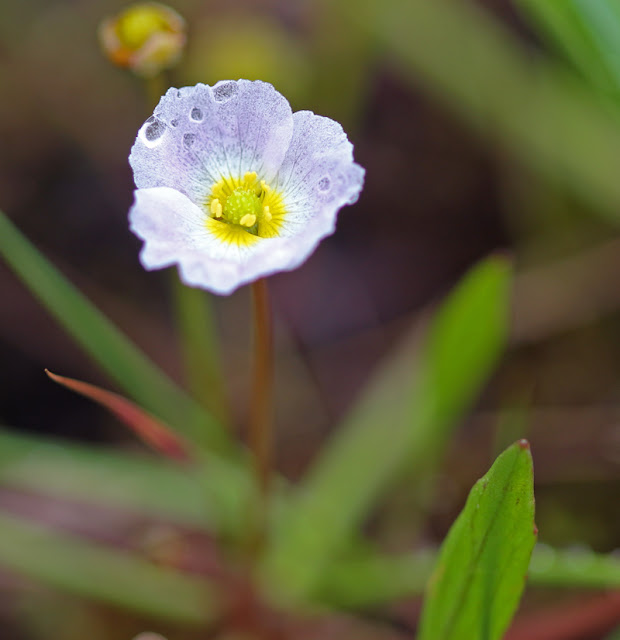 I need not have worried as there were orchids everywhere. Obviously, this late in June there weren't vast displays, but there were some lovely speciments to be found. 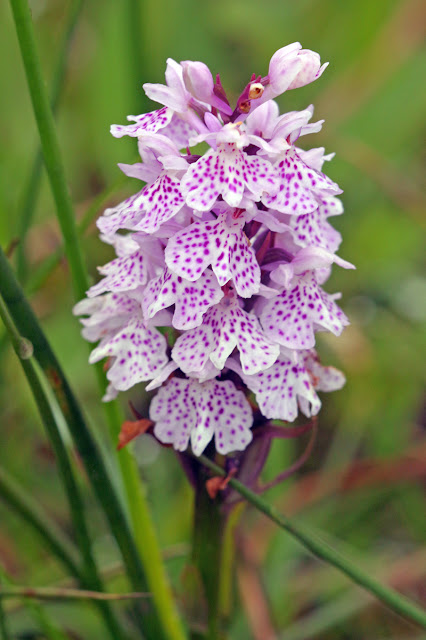 Heath Spotted Orchids were plentiful in the drier areas.
Much like Common Spotted, the variations in colours, patterns and form vary tremendously. 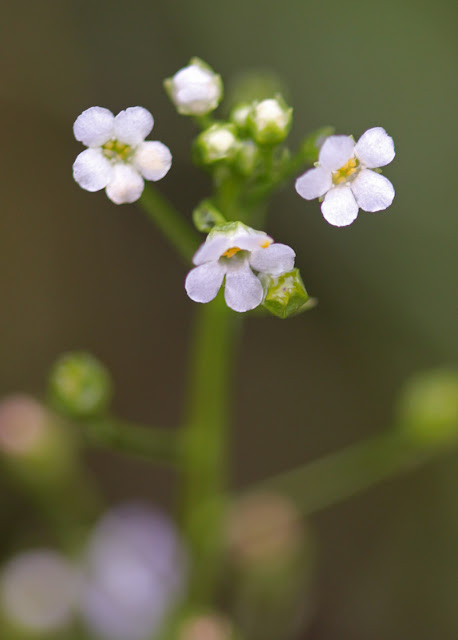 Brookweed was here and there, a surprise, as I'm used to finding it in shingle habitats.

These are quite small plants, but fairly sturdy with bright 5 petalled flowers. 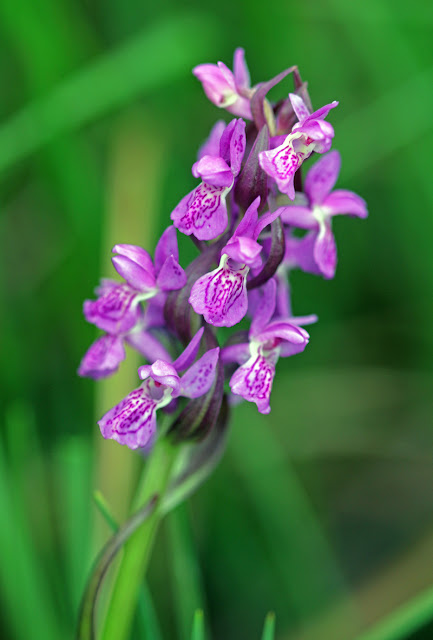 We then found several Early Marsh Orchids, long gone to seed in Kent.

This is a sub-species we don't get in Kent either, all ours are a dirty white (spp incarnata) with perhaps a hint of pink at most. 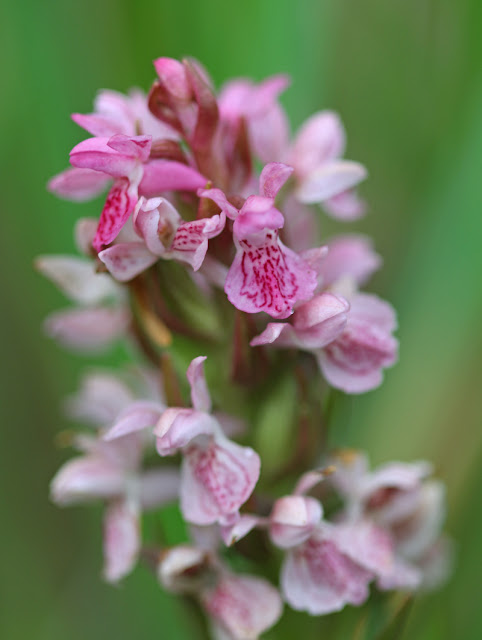 This one looks almost like spp cochinea which is a nice crimson red colour.  It might well be, but I'm inclined to think it's just a colourful variant of spp pulchella which was the dominant sub species here.

I did spend quite some time immersed in Harrap's Orchid book though!


Right by the boardwalk (as were most plants) I found a patch of these stunning Marsh Cinquefoils, a beautiful plant that I've only ever seen at Dungeness in Kent before. 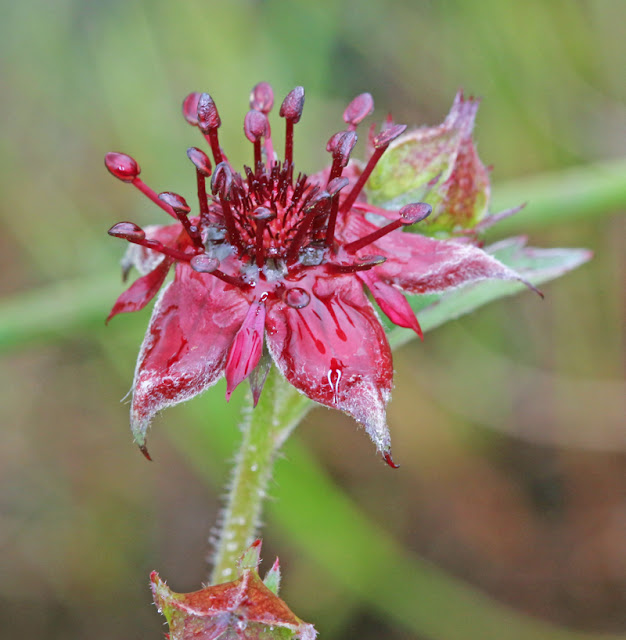 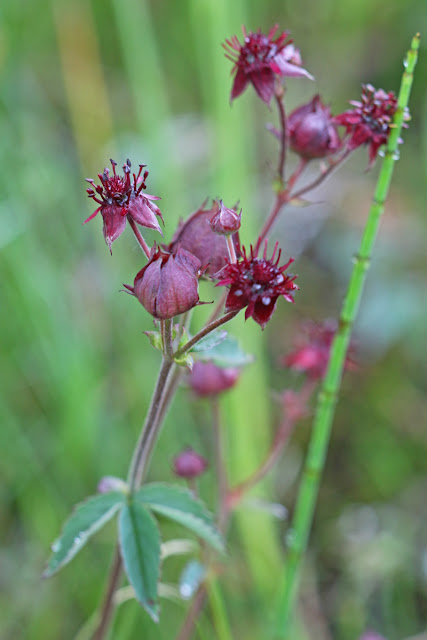 
Here's a photo of the whole plant as best as I could get. By now I was feeling quite ill and despite the excitement had to slow right down. I was ok getting down to photograph the flowers, but getting up was difficult. When you're having a great time it's easy to forget how unwell you might be and overdo it. 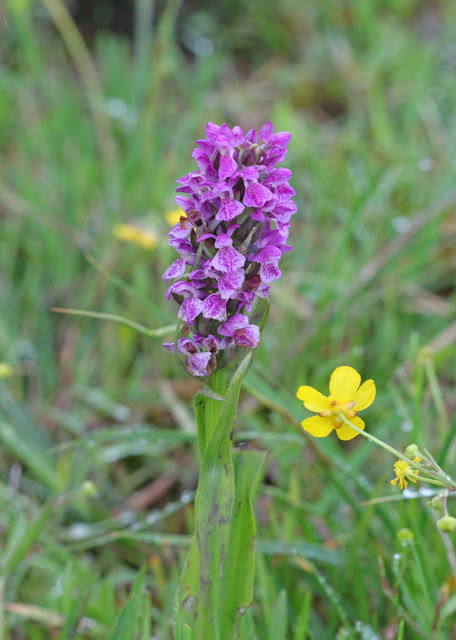 Here's a small orchid that had me baffled. I think it may be Northern Marsh Orchid, but perhaps it is a back crossed hybrid with the Early Marsh as well?

It has the diamond shaped lip of the Northern, but has the habit and appearance overall of an Early Marsh.

I don't really know to be honest, so for now I'll call it a Northern Marsh, being an orchid I'd never seen before didn't help.


I may have been too late for the best displays of Marsh Orchids, but the first Marsh helleborines were coming out. There weren't many but they really are one of the most beautiful wild orchids we have in the UK. 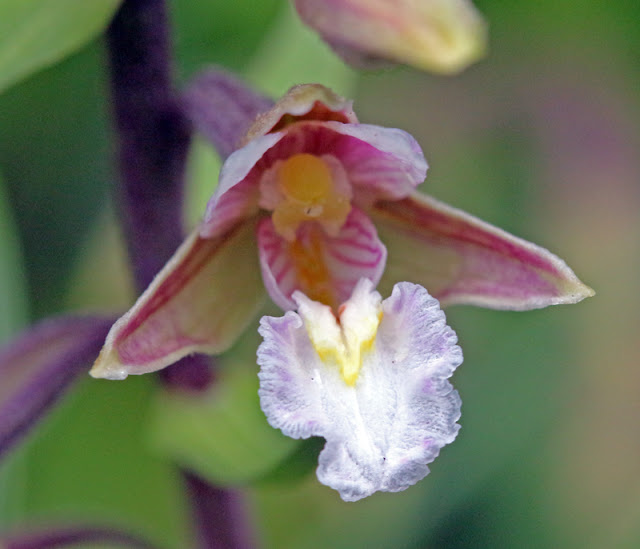 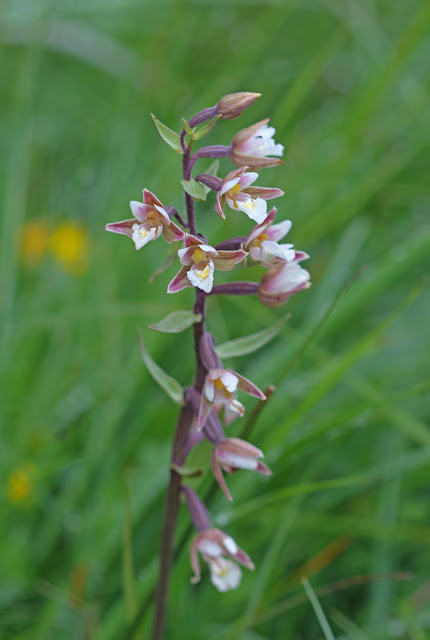 As we walked on, we met the horses which graze this reserve keeping it tip top for wildflowers. Unlike most private land with horses (especially in Kent) each horse has acres to move around in, thus overgrazing doesn't happen and wildflowers set seed without all being grazed off. The benefit is that the site doesn't scrub over which would eventually turn the fen into a dull bog forest! 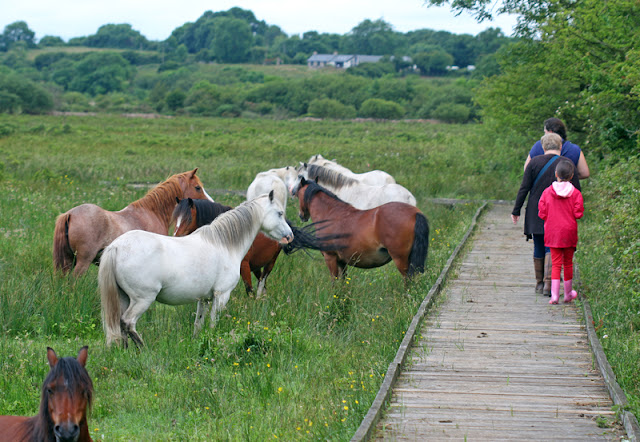 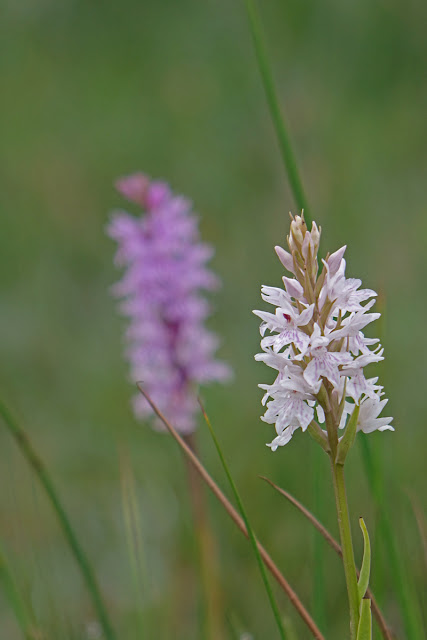 Common Spotted Orchids were also numerous, at their best at this time.


We then came to a more acidic habitat and found several of these Sundews. This one has a meal part digested within it. 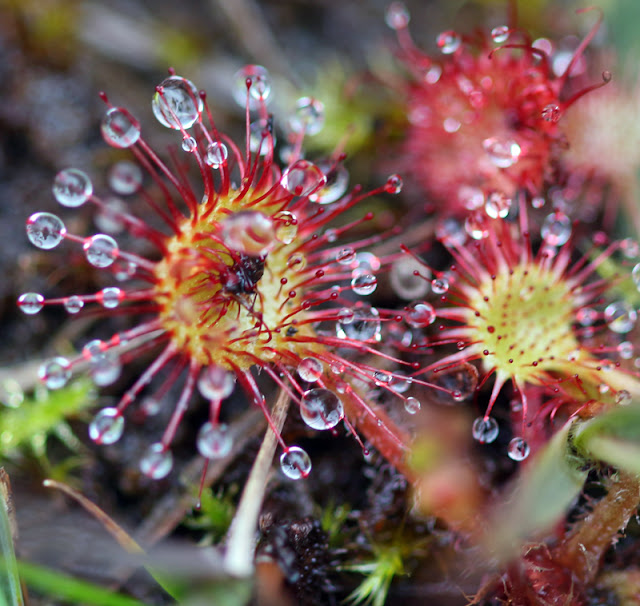 Beautiful drifts of Bog Asphodel brightened up this area of the bog. I wonder if Wordsworth had written his poem about these instead of Daffodils, how they would now be perceived? 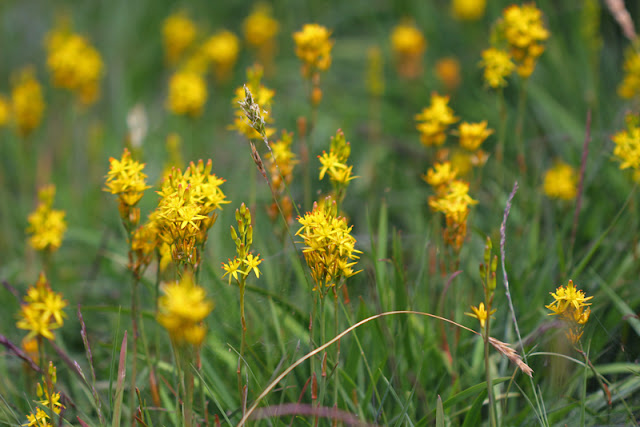 I then found my first ever Common Butterwort, its pale green leaves standing out against the dark soils. Alas no flowers yet. It's a common plant in the West of the UK but absent from the South East. 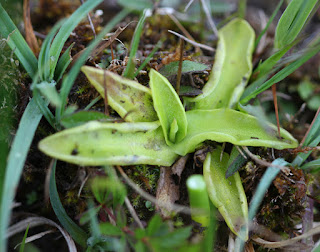 The leaves are sticky and this also traps insects on them and digests them for nourishment in the poor acidic soils that can't support it. A wonderful adaption.


Another plant absent from Kent is this Marsh Lousewort, far bigger and taller than normal Lousewort that we do have. This one has a Mirid bug on it. 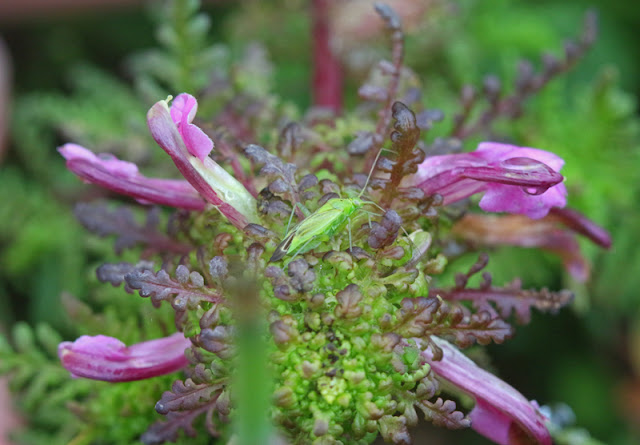 Here's one next to a Square Stalked St John's Wort. Tall aren't they! 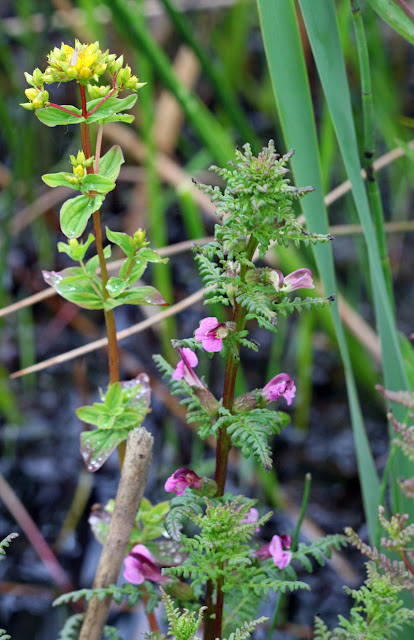 There was no much to see and little time. I had taken longer than anticipated due to illness, but I made the most of it. There were lots of other wildflowers seen but not included (else the blog would go on for ever).  This Ragged Robin was the last plant photographed here. 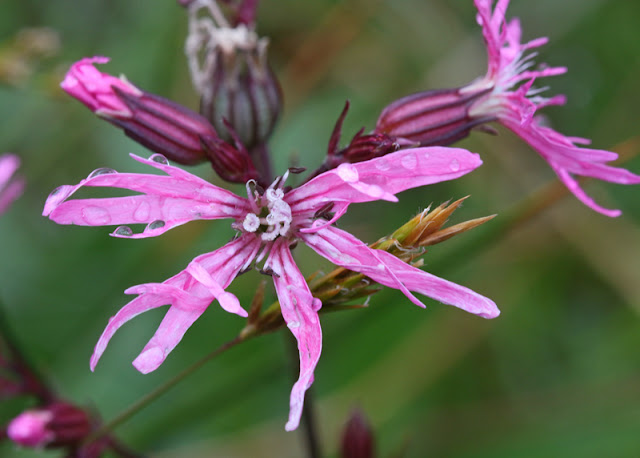 So we said goodbye to this wonderful reserve on Anglesey and headed North which will be in Part 2 to follow soon. 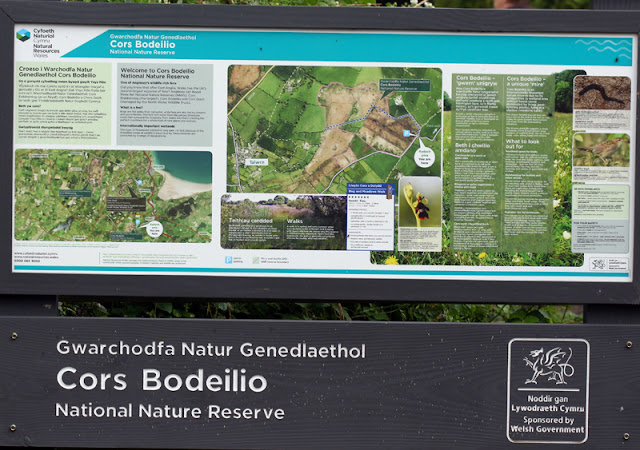 I had hoped to see Dactylorhiza traunsteinerioides - Narrow Leaved or Pugsley's Marsh Orchid, but though recorded here, I was likely too late in the season to see them, perhaps next time! 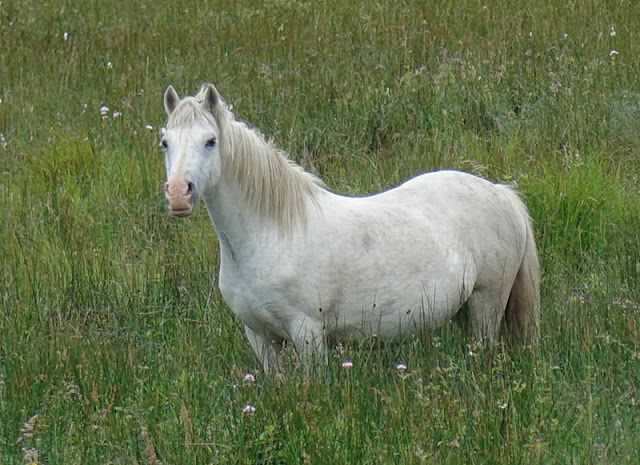