- July 07, 2017
I'm well behind on my blogs and the temptation is to bin out of date photos and move on. however, this day had so many unusual and beautiful flowers, I had to write it up.

Unusually we started on the coast near Littlestone with good views of Greatstone Bay out towards Dymchurch, Hythe and Folkestone. 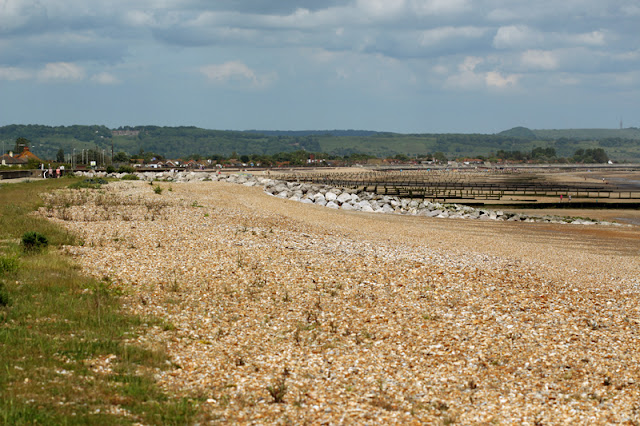 We had decided to walk the coast path from Littlestone to Dymchurch, quite a long walk, but hopefully with plenty of interesting things to see. While getting ready we even bumped into a botanical friend, Owen, who is also the Romney Marsh Ranger and a great source of information if you are new to the area. 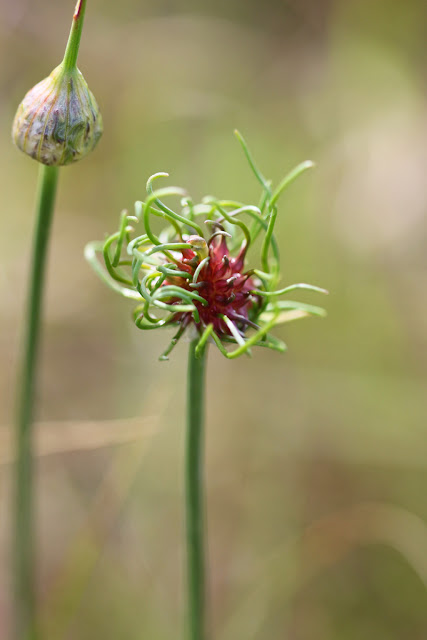 Sure enough we soon saw lots of Wild Onion growing, most looking like the plant on the left of the photo, however I did find one with the flower open. 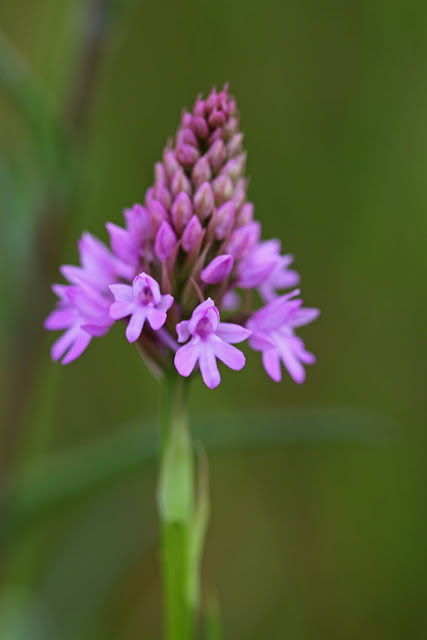 The first of the season's Pyramidal Orchids were coming into flower. Of course, at the time of writing, they are in full bloom all over Kent. 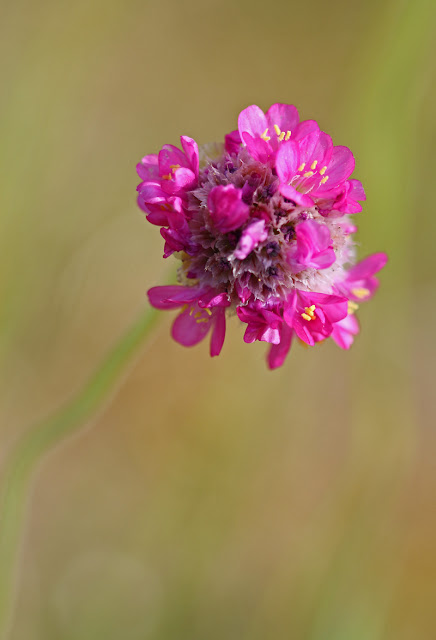 Thrift is a common sea plant here, but most are light pink. This very dark coloured flower stood out from the usual pink crowd nearby.

On the sea wall we spotted some caterpillars of the Brown Tailed Moth, common here abouts. 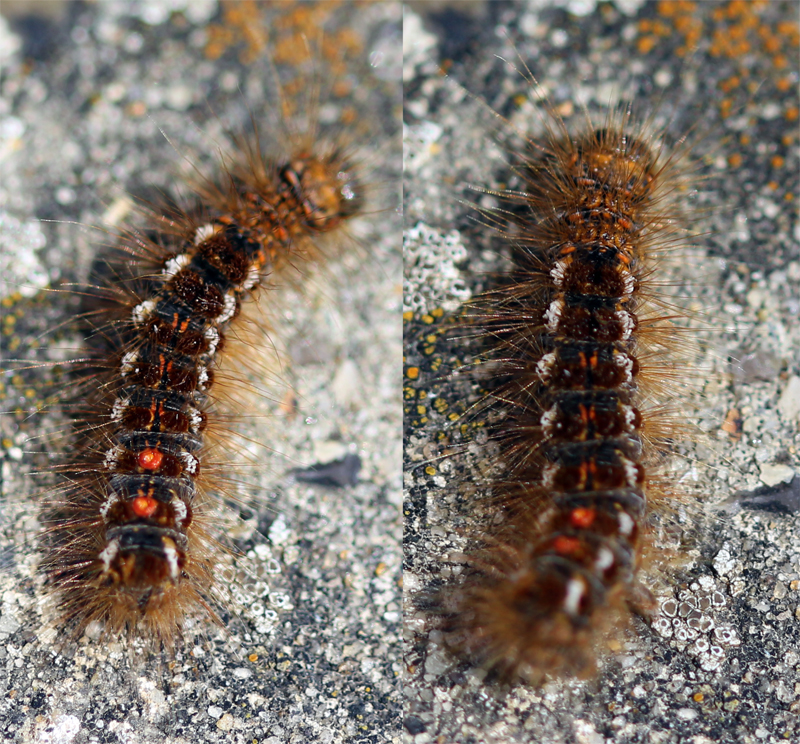 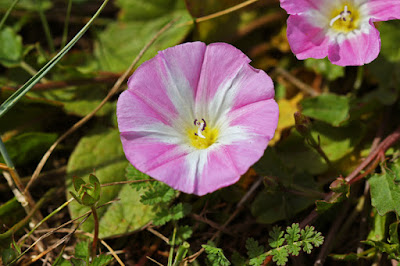 Near St Mary's Bay I got excited finding this, thinking it was Sea Bindweed, a Kent RPR species, but the leaves showed it to be the common Field Bindweed, still pleasing to see (in the wild anyway).


On a small area of wind blown sand on the concrete of the sea wall grew this Seaside Daisy, a great opportunistic plant. 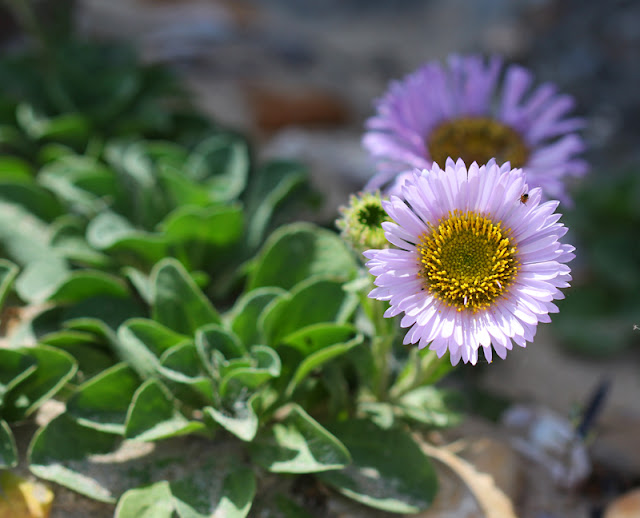 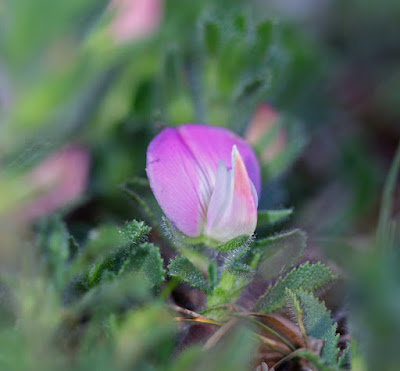 Common Restharrow is a common seaside and arable plant and here was no exception. I love their little pink flowers with a rhino horn poking out of them!

If you touch them, their oily glands will rub an unpleasant lemon like smell onto your hands.

Beware of similar looking Spiny Restharrow which has vicious spines like a Blackthorn! 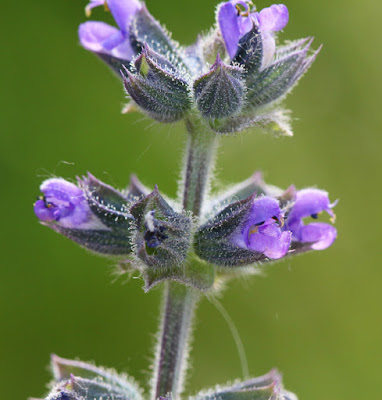 Wild Clary is also a Kent RPR plant but it is quite common in this area along the coastal strip.

We got back to the car and drove back to Littlestone on the green by the sea. 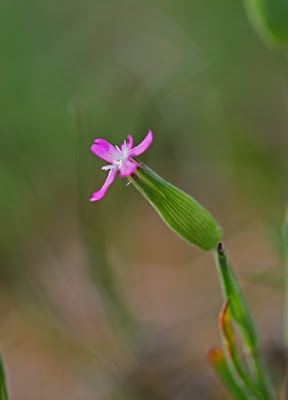 Here was a colony of Sand Catchfly (thanks Owen). They are very small and very 3 dimensional making them very difficult to photograph without using photo stacking.

In the sea breeze as well, this was the best I could do. 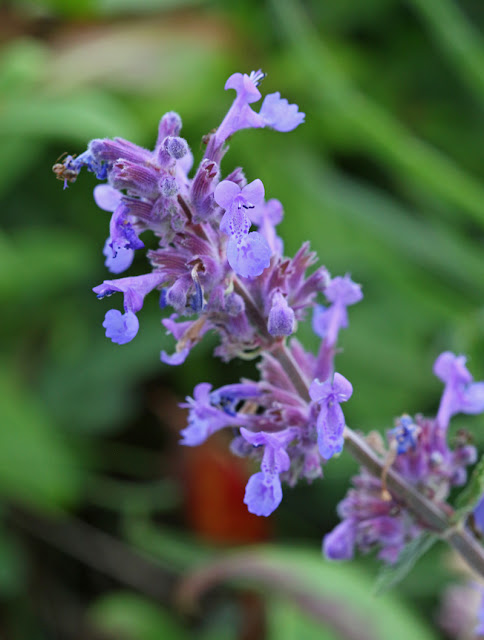 From here we stopped at Taylor Rd car park and I found this weird blue flowered Lamiaceae type plant.


I later found it to be Persian Catmint, a garden escape growing well on the shingle. It had been recorded here before which helped me identify it.


Then on another tip from Owen we stopped at Jury's Gap for a fine stand of Sea Clover on shingle by the side of the A259. 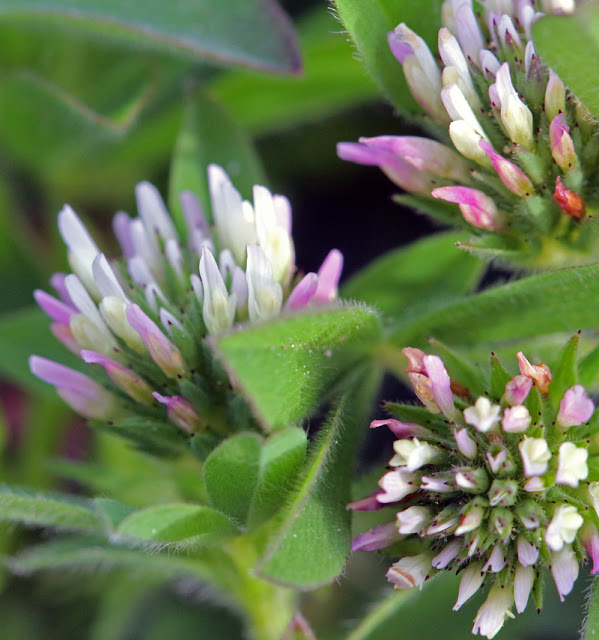 However, what makes these easy to tell apart from other clovers are its seed. 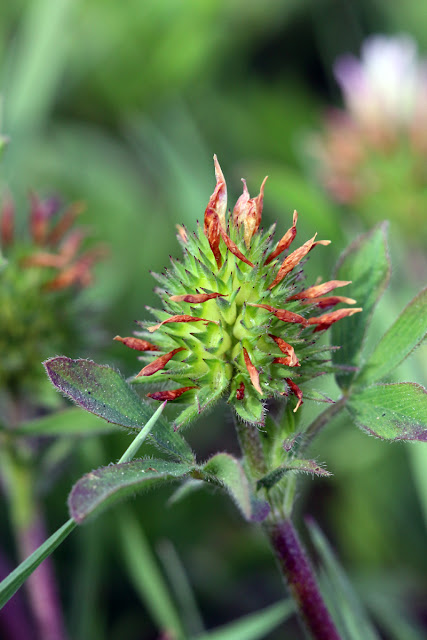 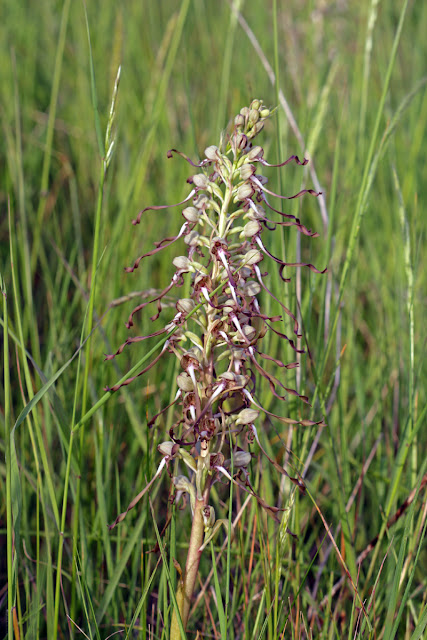 We then popped into East Sussex for a quick look at the Lizard Orchids near Rye, thanks to Owen again for helping out with this.

It's always nice to see them somewhere other than Sandwich! 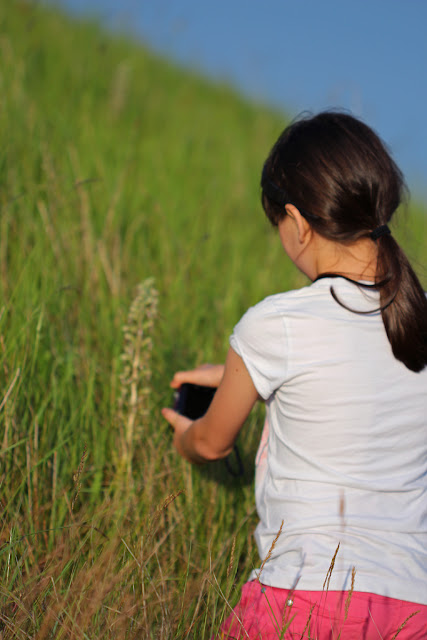 I was very pleased, my youngest Grand Daughter wanted to see them and take some photos!

The next generation of naturalists are vital to the conservation and protection of our wild plants, creatures and habitats.

We'd used up most of the day and we made our way home, but thought we'd pop in to Hothfield bog near Ashford to see what was up. It's an acidic bog, a very rare habitat now in Kent and most bog plants are Kent RPR species as a result. 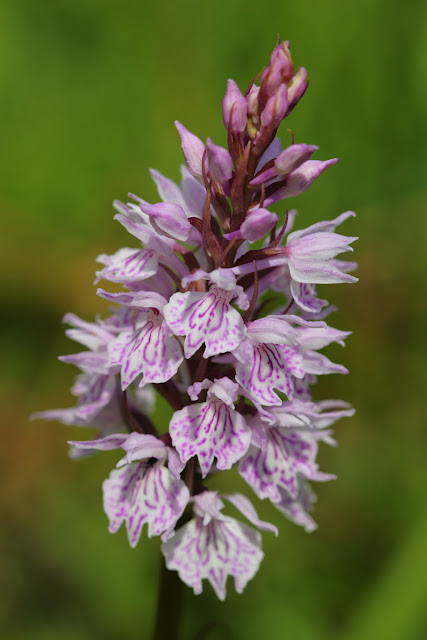 There were numerous Heath Spotted Orchids now in flower, always a delight to see and a change form the much commoner Common Spotted Orchids that fill the chalk lands around. 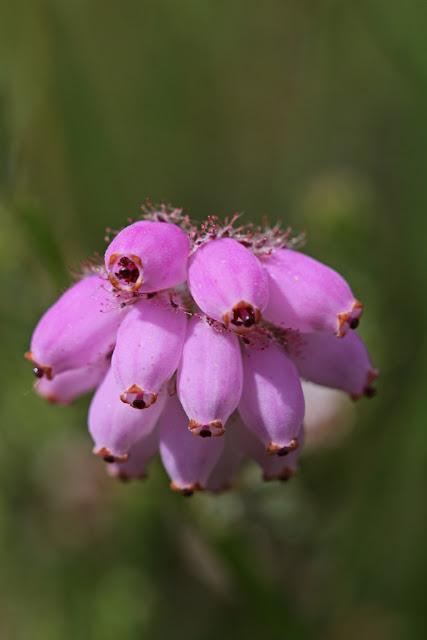 Cross-leaved Heath was also just starting to flower. Examine the leaves to determine it from Bell Heather. This has whorls of 4 leaves around the stem, the other has just 3.


Other than minor differences, the flowers look just the same. 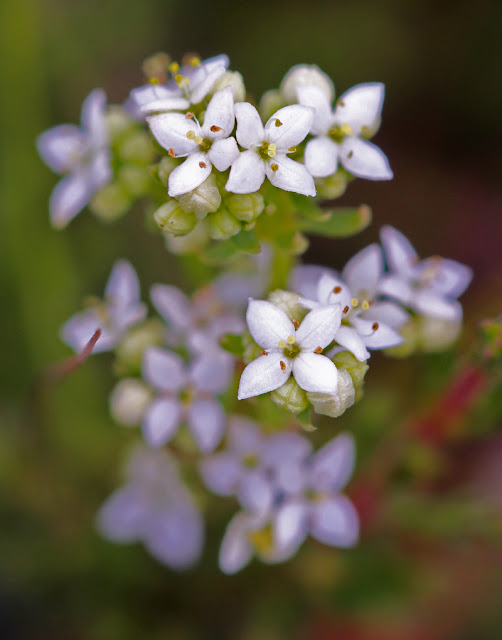 Heath Bedstraw is very common and not often photographed as a result. View the leaves under an eye loupe to determine the species, though in an acidic bog, this is the likely only candidate! 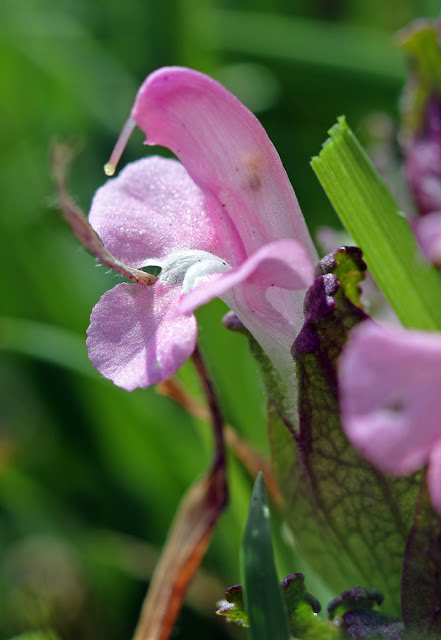 The humble Lousewort also put in an appearance, it has a weird shaped flower, but it's so small you can easily walk past it without noticing it.

It's semi parasitical and only found in acid, usually damp soils.

I was quite pleased to find some Sand Spurrey here. I often see the Sea Spurry's but this species is much harder to find inland. It looks very similar to Lesser Sea Spurrey but the leaves aren't fleshy. Found on the drier, sandier parts of the venue. 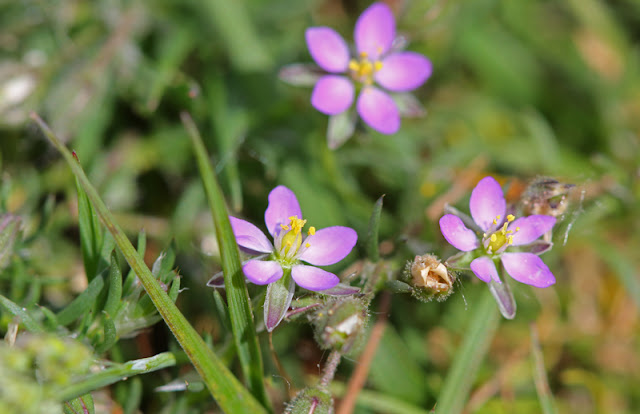 Hothfield Heathlands are one of the most botanically recorded areas in Kent, so I was very pleased to find the next plant which up until now has never been recorded there. 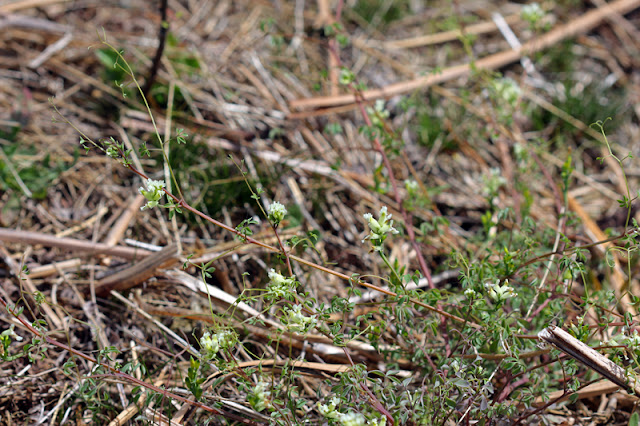 Doesn't look much does it, but I was excited about it. I'd only found it on the dry shingle of RSPB Dungeness before this day. 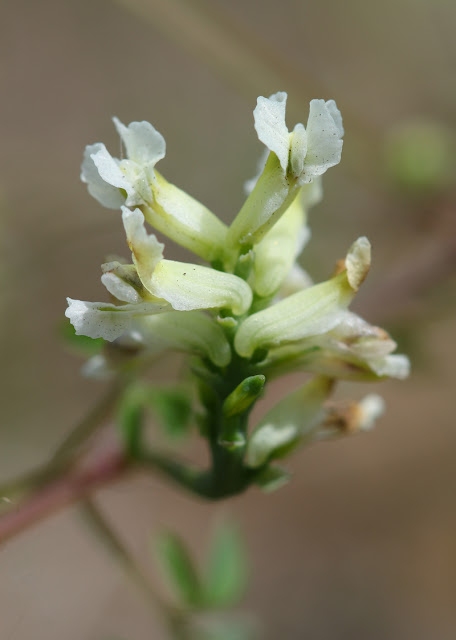 We obviously saw a lot more than this  but time and space limits what I can post. June is a wonderful time of the year and though, now gone until next year, many of these plants can still be found in flower as I write in early July.