- July 08, 2017
This is an account of a day out in early June, just a month ago, but it seems longer! Many of the plants featured can still be found flowering now in Kent, and certainly can be found the further North you go.

I started out at Kent Wildlife Trust's Holborough reserve, a very rare alkaline fen over chalk in the Medway Valley. It is renowned for its marsh orchids in particular, but there is much to see there. 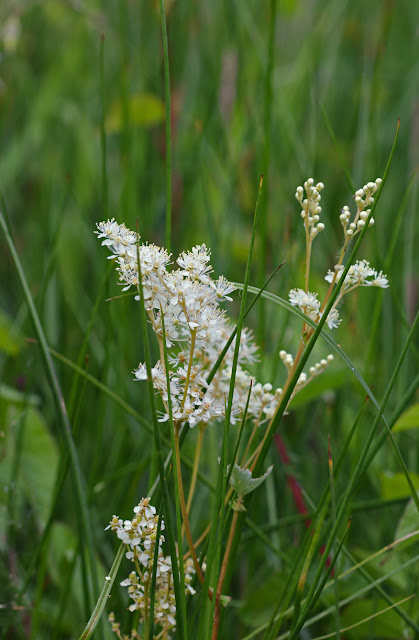 As I walked into the first meadow I found Meadowsweet coming into flower.

I've just returned from a weeks holiday in Wales and this is very common and in full flower now. Thousands of plants can be seen along roadsides in certain areas, especially on Anglesey. 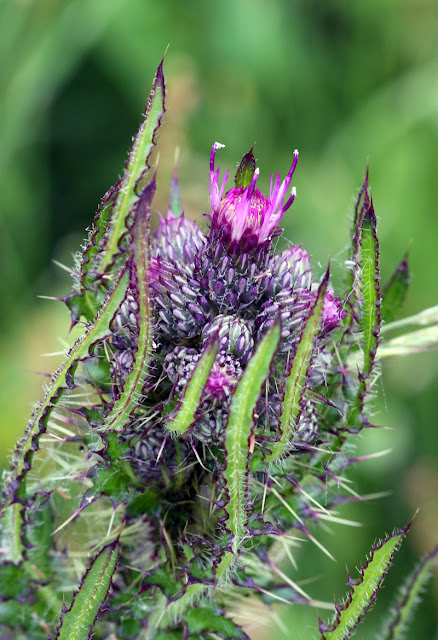 The deep purple flowers of the Marsh Thistle were next spotted. This can grow to 2m tall and often on dry places, not just marshes and bogs.


In the ditches grew Watercress, an attractive crucifer that is obviously edible. 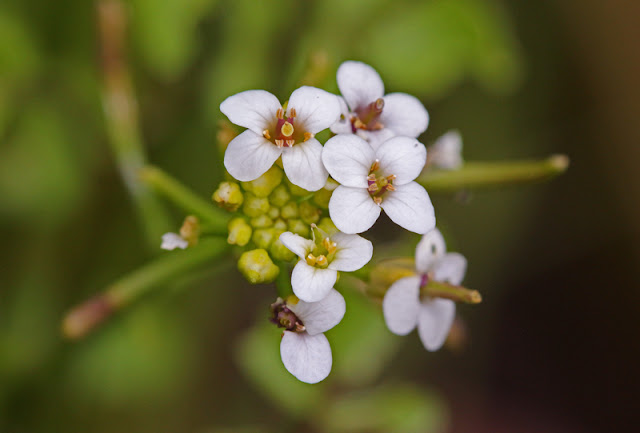 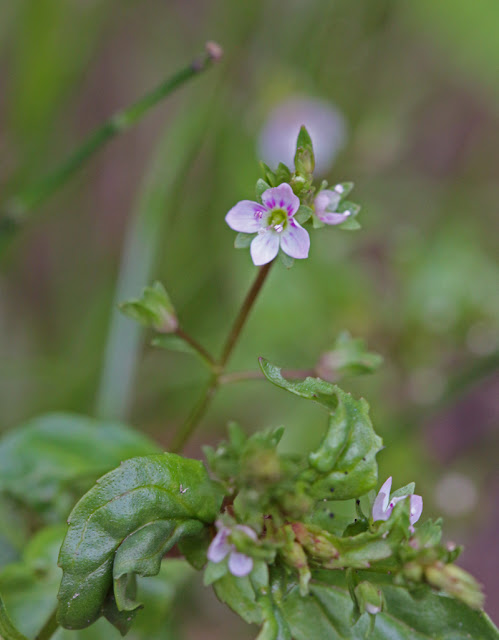 Another lover of the damp is Pink Water Speedwell, reasonably abundant here. 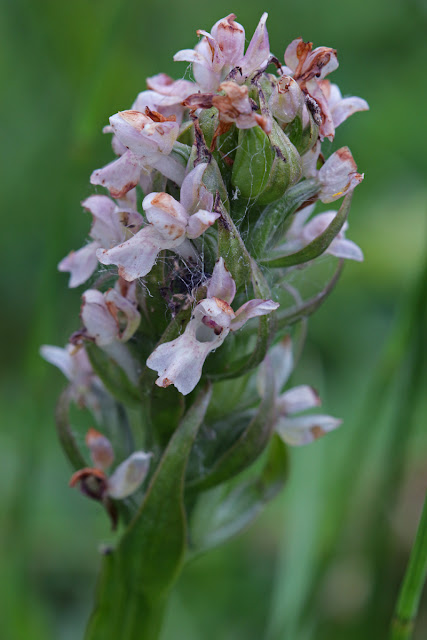 This was the only flowering Early Marsh Orchid I could find. All the rest, and there were many, had already gone to seed, no doubt due to the hot dry conditions in Kent this spring.


However, they are still flowering on Anglesey and further North in the country. 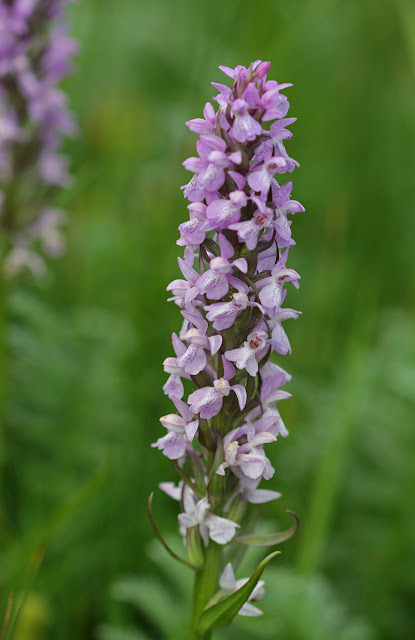 The other numerous orchid species here is the Southern Marsh Orchid, now in full flower.

Having now seen the Northern Marsh Orchid as well, the Southern Marsh seems much taller and more robust, but then I've only seen Northern in Anglesey, so maybe they're bigger elsewhere? 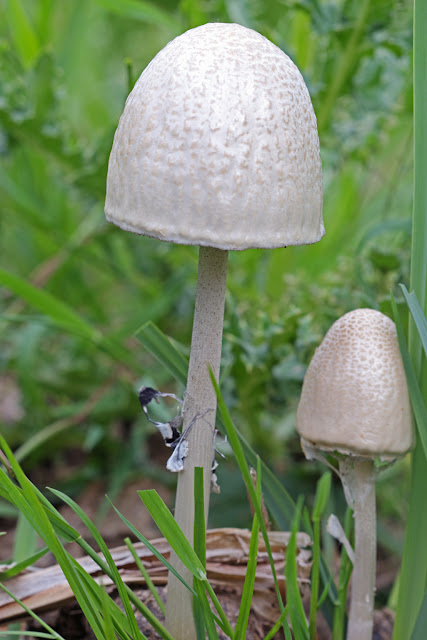 Horses now graze the meadows and in some dung grew this unsual fungus, no doubt poisonous! 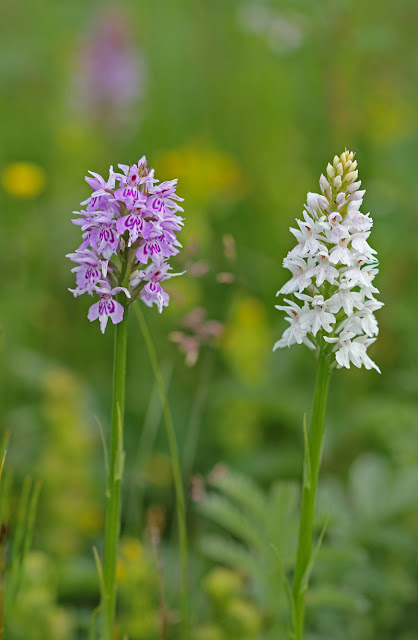 Finally at this venue were several Common Spotted Orchids with each having a unique pattern of loops, dots, dashes and lines, let alone colours! 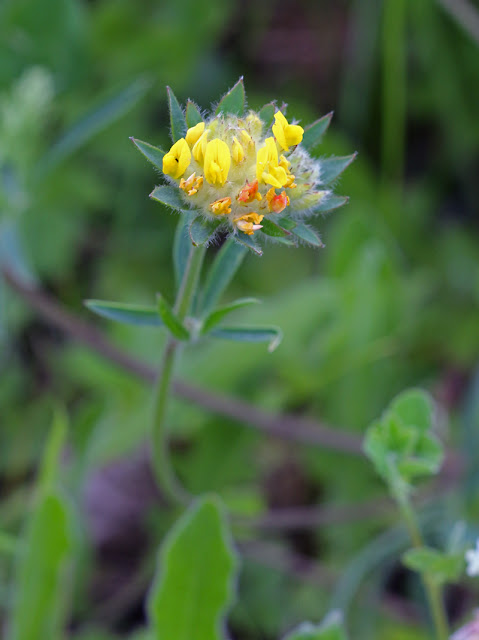 From Holborough I headed to the strip of grassland near the Eurostar rail line near Strood.


There are lots of flowers here, a mix of naturally occurring and those seeded when the railway line was built.

This is Kidney Vetch, probably a seeded species from the railway.

This is the food plant for the caterpillars of the Small Blue butterfly.  I hoped they would have survived here where I saw them last year, though there wasn't much Kidney Vetch about. 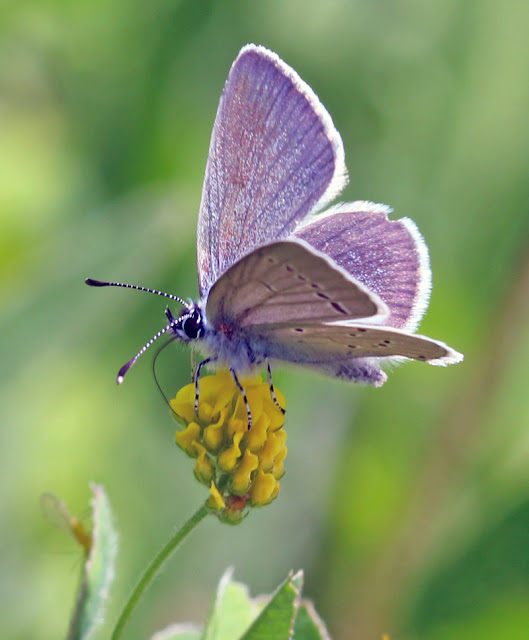 Well find them I did and quite a few, which was a relief. I've not seen them elsewhere in Kent. They're very small as well (as their name suggests) and easy to miss. A delight to see. 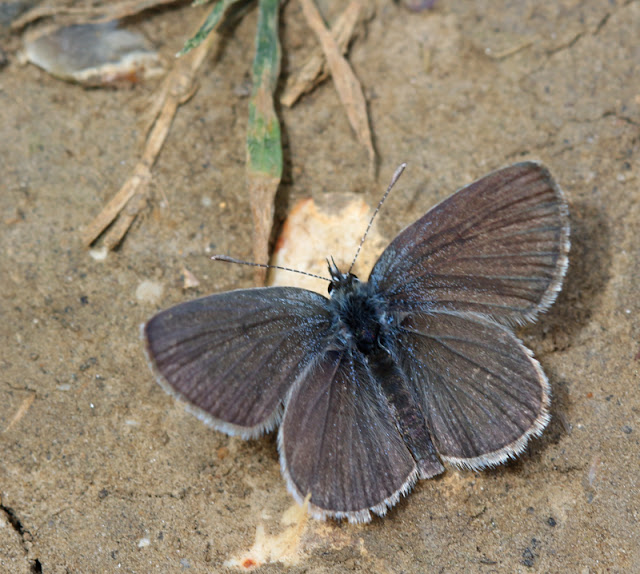 Another easy to miss plant is the Long-stalked Cranesbill which is pretty much the same as Cut-leaved Cranesbill but has flowers on long stalks as the name suggests. 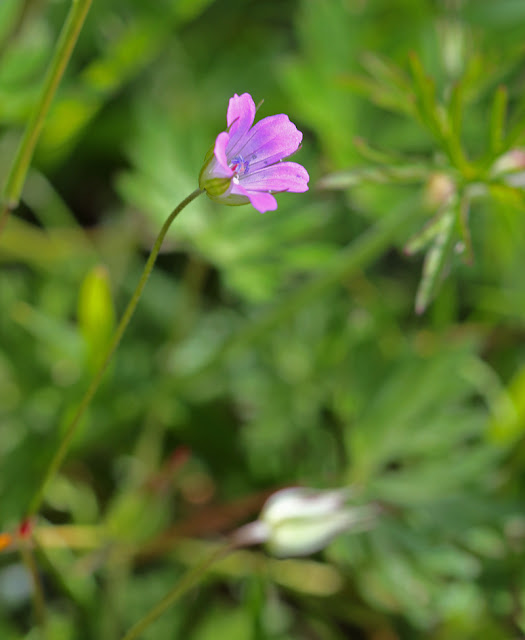 The Soldier Beetles were having a good time as well as me, just in a different way! 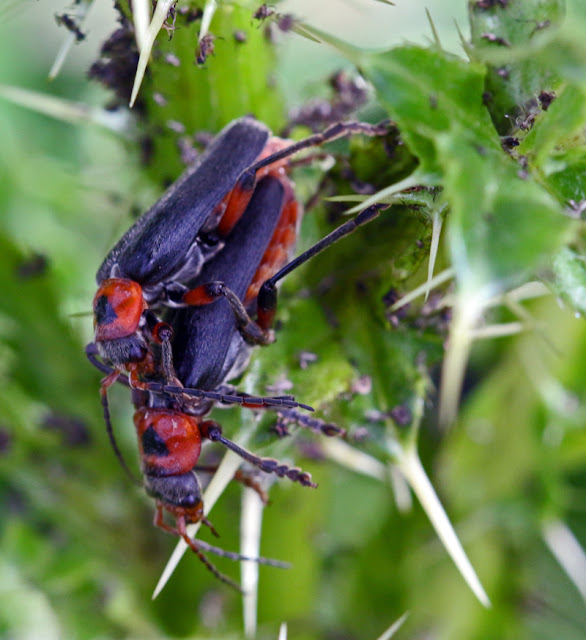 Yellow-wort is a flower of chalk soils and bright sun. It closes up on cloudy days and in the late afternoon. 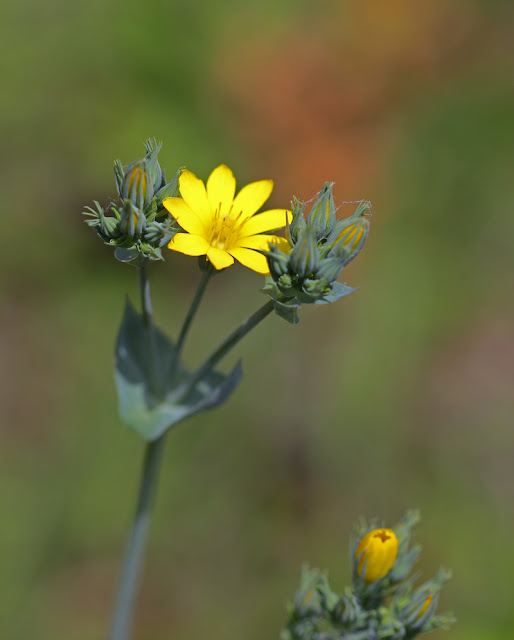 The beautiful but delicate Grass Vetchling was dotted within the grasses, a single flower to each grass like stem 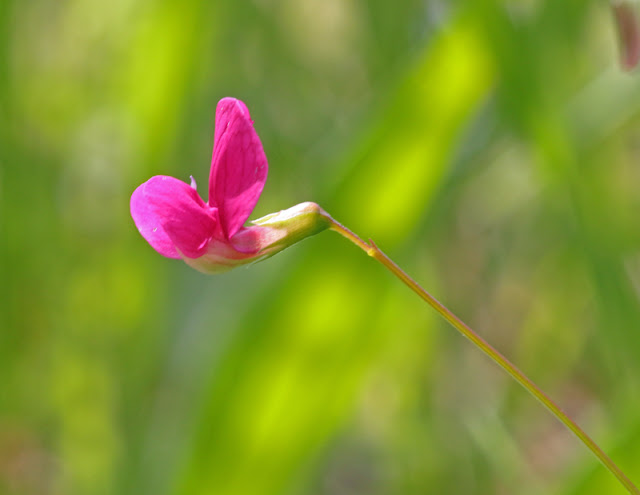 There are often 100+ Bee Orchids along the railway line, though I only found 20 or so this time around, always pleasant to find and admire. 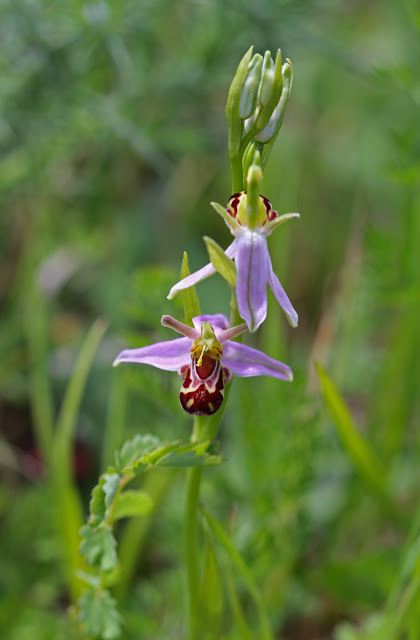 Many people mistake these for an orchid species, but they are in fact Common Broomrapes, a parasitical but fascinating species, of which there are several host specific types. The Common Broomrape though isn't that fussy. Here it is growing on Clovers. 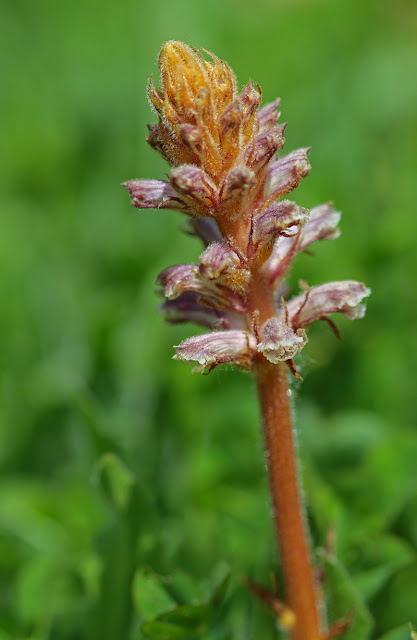 The last plant I photographed here was Common Vetch, an attractive, though sprawling plant which clings on with tendrils to nearby vegetation to lift itself up to the light. 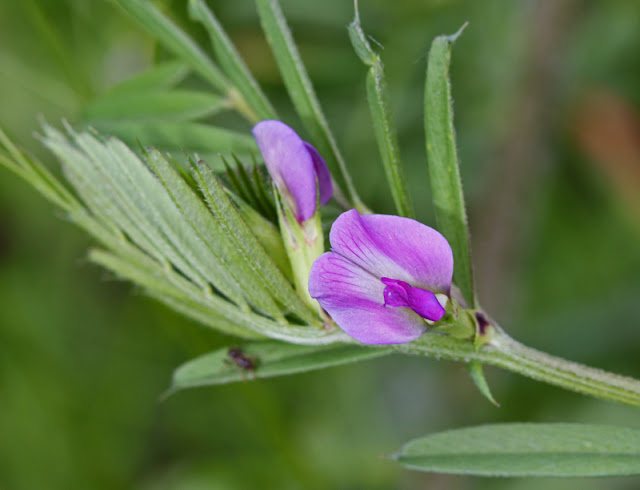 From here I made the short journey to Ranscombe Farm for a fleeting visit. You could spend days at Ranscombe, it really is a wildflower and wildlife heaven managed by Plantlife. Even the car park has a few Man Orchids there, almost gone over and certainly gone to seed at the time of writing in early July. 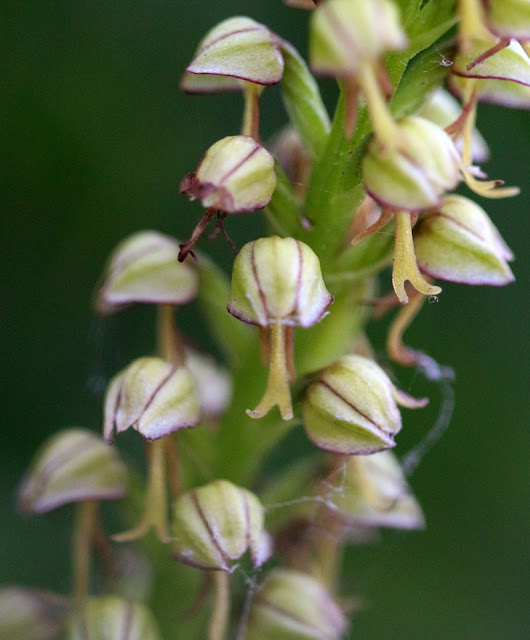 I made my way up a steep slope from the car park to Longhoes Field for a quick look around. 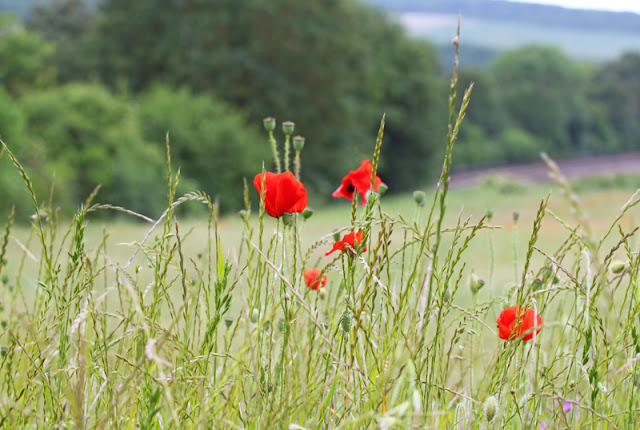 Longhoes Field has many Poppy species, this is Common Poppy, but Opium, Rough and Long Headed can also be found along with others.

In the sparse crop (deliberately sown that way with no weedkillers) were numerous Corncockles, an arable plant in serious decline and mostly now only found from seed mixes. 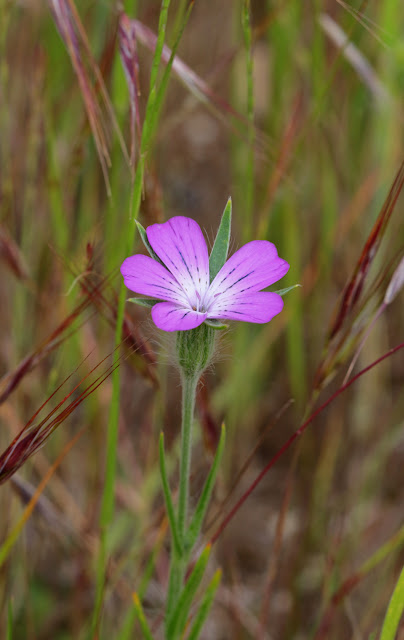 They really are a stunning wildflower. 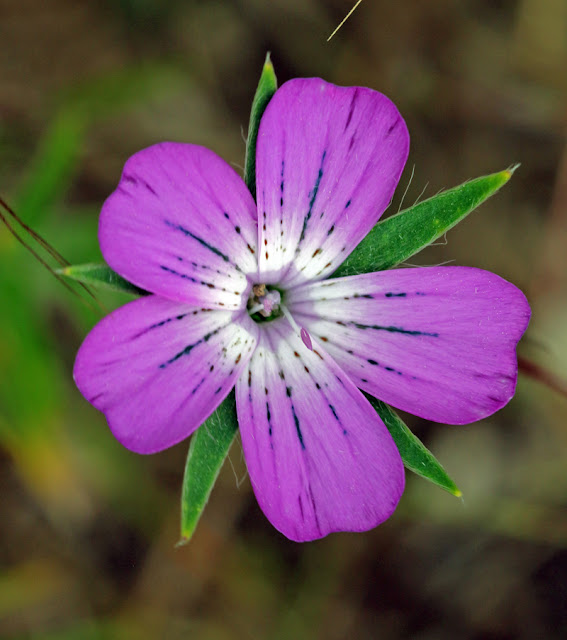 Tufted Vetch was now in flower, it's purple coloured flowers drooping down for the bees to explore and feed on. 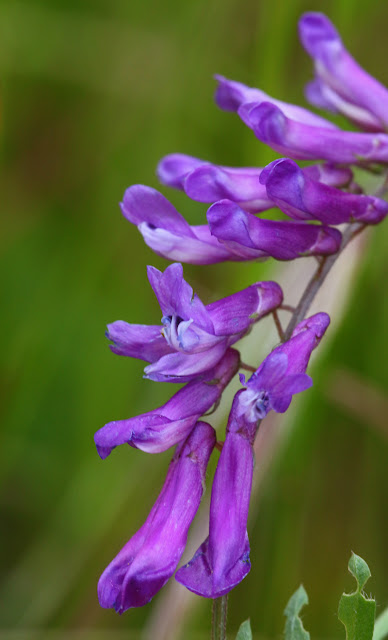 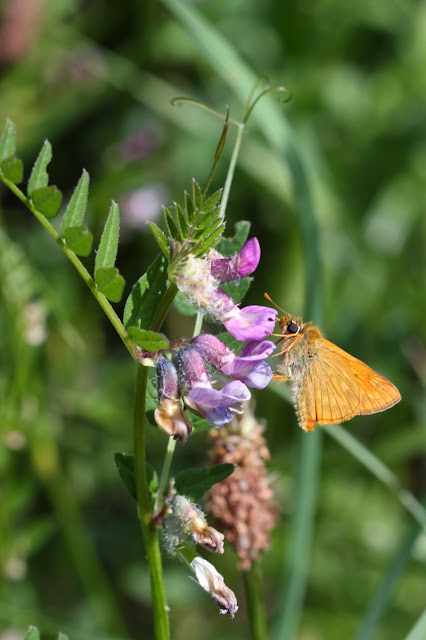 Finally for this day, here's a Field Pansy, perfection in miniature and very common in arable fields. 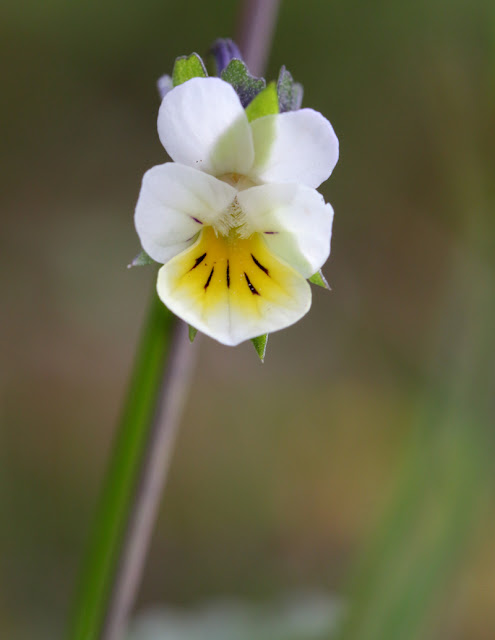 After a hard day in the heat and sunshine I made my way home, all venues were a delight to visit and still are.