- July 28, 2017
From Cors Bodeillio we headed North on a casual exploration of this part of the coastline. It was very nice seeing a multitude of wildflowers along many verges of country lanes, including orchids, unlike the mostly mowed verges of Kent.

We stopped in one area and I had a short walk around the road verge. This is what I found in a very small area. 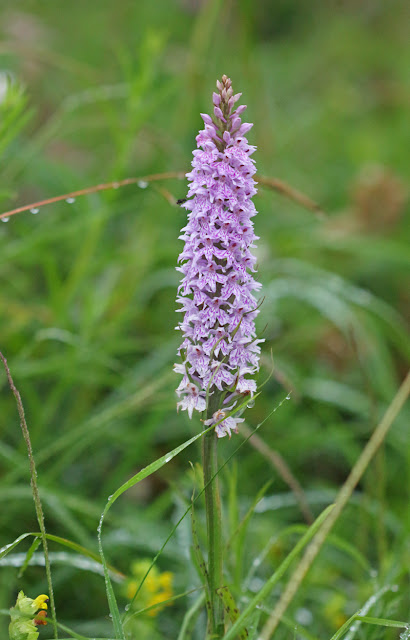 This area had around 50 or more Common Spotted Orchids along the verge. Of course it was raining again.

Not far away was a nice display of Bell Heather, turning the area purple. 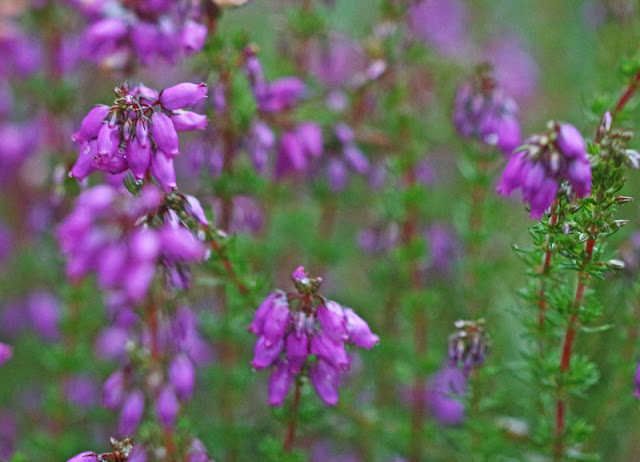 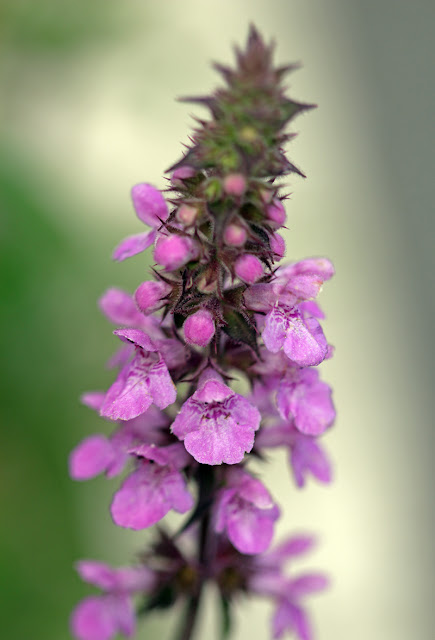 Imitating an orchid from a distance were some Marsh Woundwort in a wet ditch by the roadside.

Near the hedgeline was a Tutsan, a shrubby species of St. John's Wort. 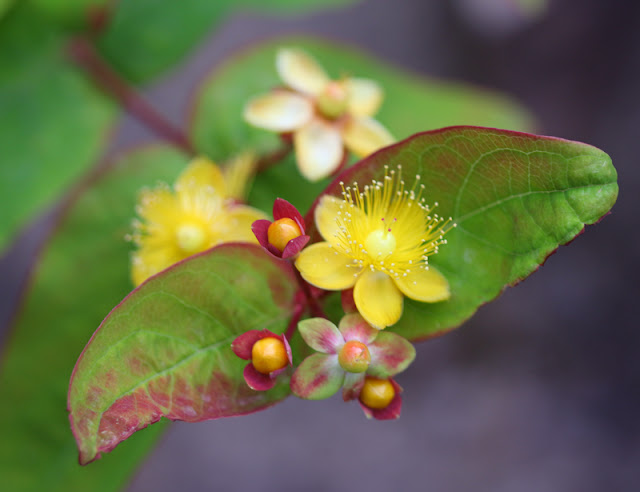 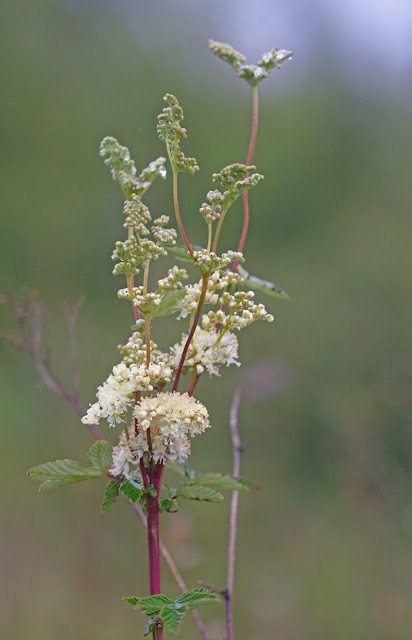 Meadowsweet was in abundance in the roadside ditches. Some areas had as much Meadowsweet along the road as we have Cow Parsley in Kent. Beautiful, and smells good too! 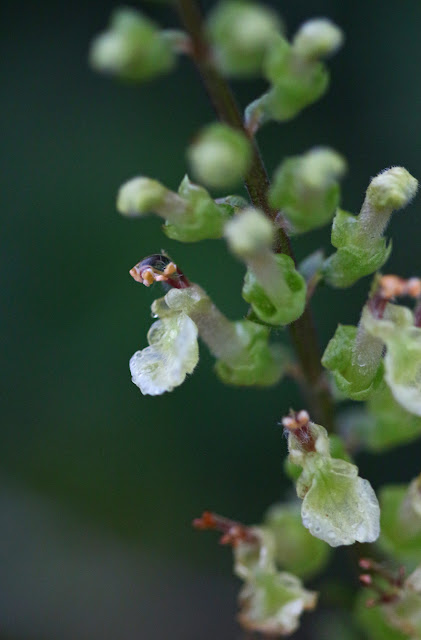 Wood Sage was the last plant featured from this verge. It's flowers are weird looking as they don't have a top petal or hood, as shown here.

There were many more wildflowers here, such as Lesser Spearwort, Foxglove, Clovers and so on.  It just goes to show what we could have on our road verges if councils could be bothered to manage them properly.

We drove North to Red Wharf Bay, though we took a wrong turn down a narrow lane which rounded a bend straight into the sea! Good job I was going very slowly!

We parked at Red Wharf Bay where there is a spit of sand and shell grit forming a small harbour. While the scenery was taken in, I had my eyes glued to the ground like every botanist does I suspect! 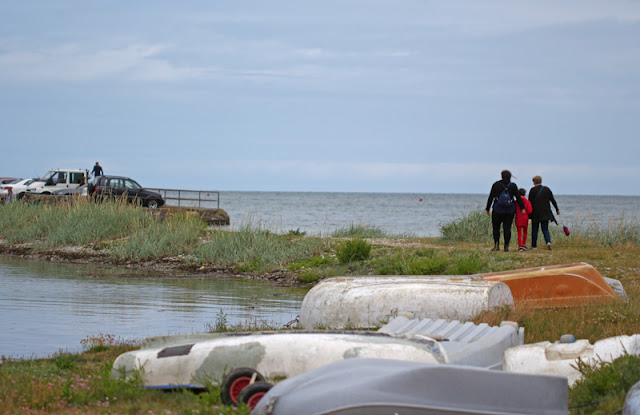 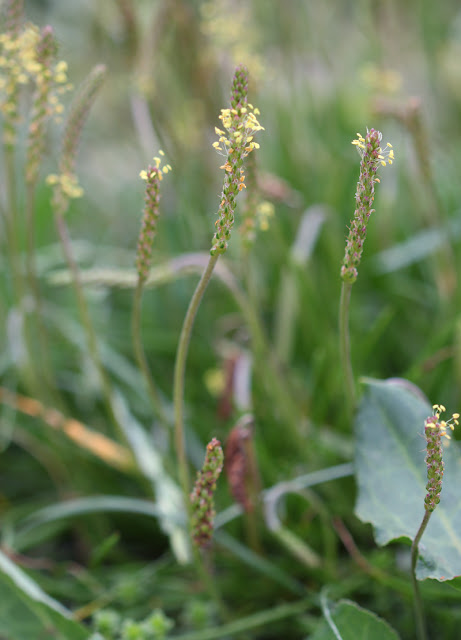 This is Sea Plantain and it grows around the high tide mark around our coasts.

There isn't a great deal of it be found on much of the Kent coast, but here it was prolific (and elsewhere on Anglesey)

It has long, strap like fleshy leaves and can tolerate being swamped with salt water every now and again.

I then got all excited about this little plant below. It's Common Scurvygrass and is absent from Kent, so a first for me. It's very common in the West of the UK.  In Kent we get English Scurvgrass, which looks similar, but has different seeds and to me appears much taller. 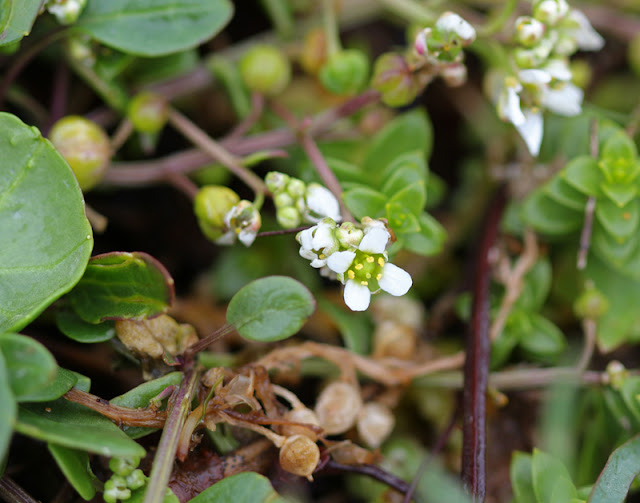 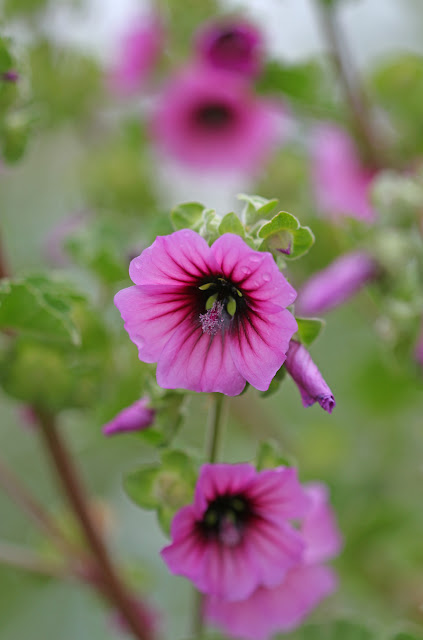 This is Tree Mallow, quite common on the SE coasts, however Red Wharf Bay was the only place I saw it on Anglesey during my stay. 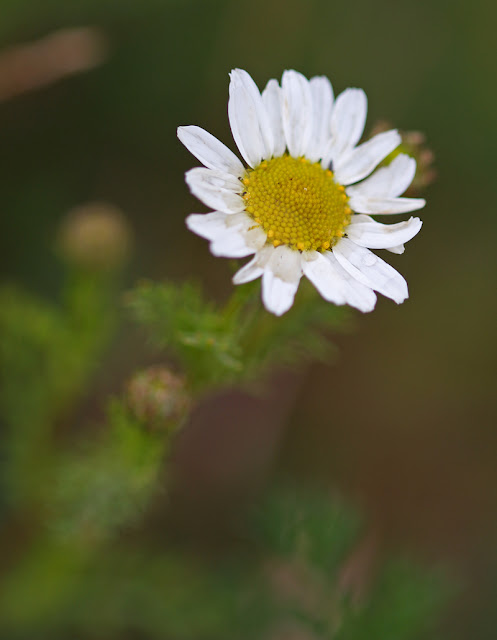 The last photo I took here was the humble Sea Mayweed, much like its inland arable cousin Scentless Mayweed, but with fleshy leaves. No doubt an adaption for being sprayed with salt water frequently!

We ended up in the area of Amlwych which has a wonderful coastal walk along the cliffs. 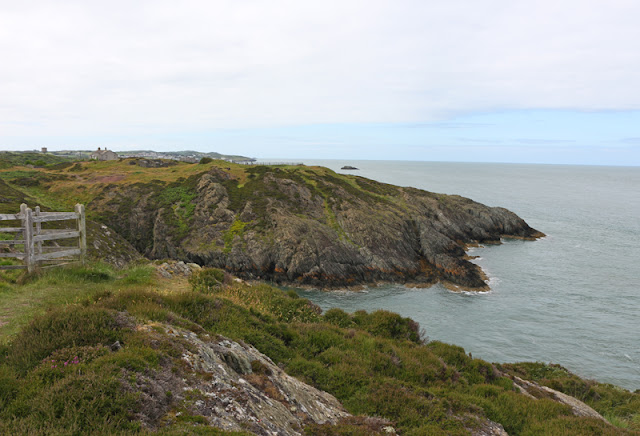 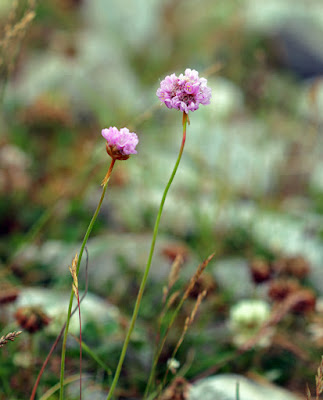 Being on coastal cliffs, Thrift was plentiful, bobbing about in the sea breeze. 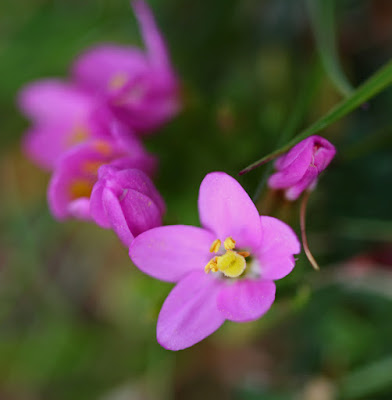 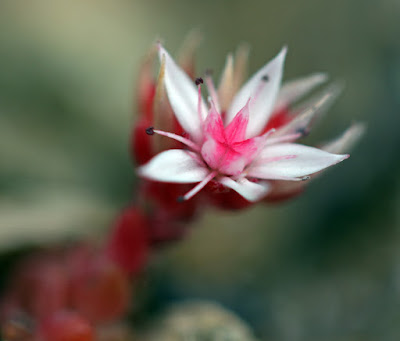 I rarely see these in the South East, where White Stonecrop is much the commoner species to find. 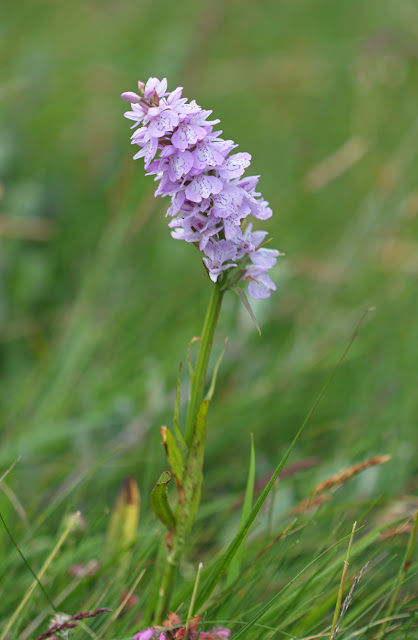 Heath Spotted Orchids were along the cliff top, though all in one small area, they were not numerous here.


I did wonder if this one was trodden on when in bud. 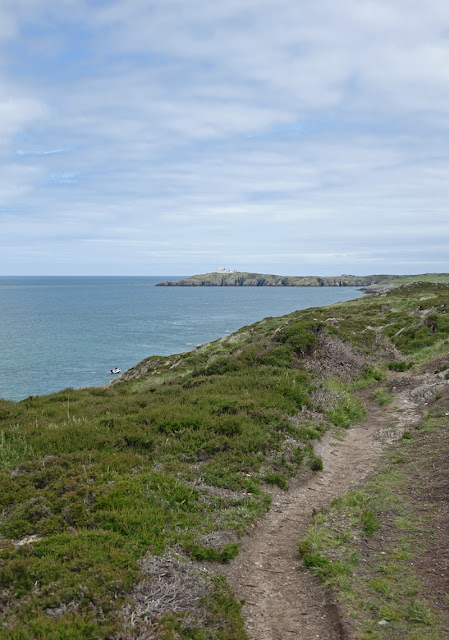 There were many fine views here and some interesting habitats as well.

Up on the cliffs was a derelict house with an even more derelict garden. Within the garden was a mature specimen of this plant below. However, it had seeded onto the cliffs and I counted three bushy plants in flower within 50 metres of the old garden. Garden escapes can be found anywhere it seems. 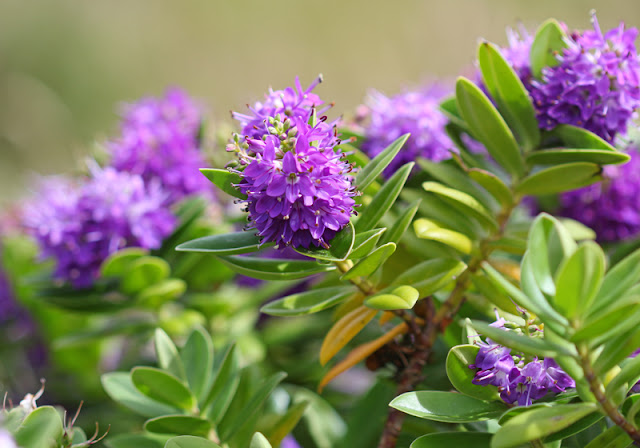 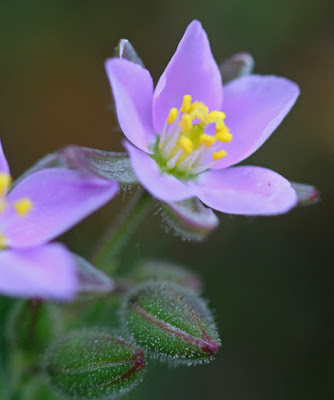 However, it works the other way around as well. Here's a native wildflower that had colonised the crumbling, sandy walls of the old garden, Sand Spurrey

I was hoping to find some Spotted Rockrose here, as we arrived before noon which is about when they fall and drop off the plant but I couldn't find any.

We rounded off a very pleasant walk with a definite Northern Marsh Orchid on the clifftops. 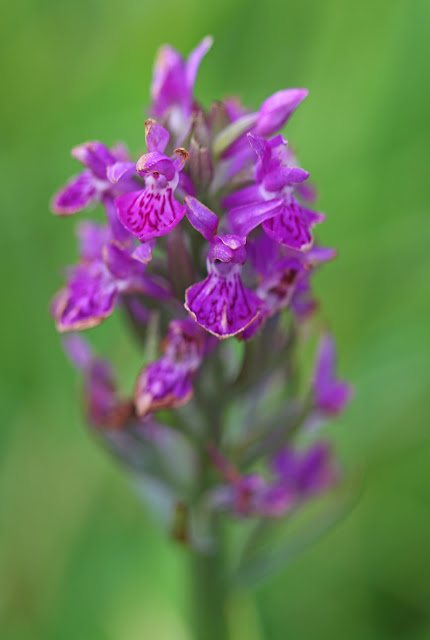 So ended our first weekend on Anglesey, but what a weekend it was.

The varying habitats, with some alkaline and some acidic often within yards of each other produced an abundance of species.

The blog only contains a selection of wildflowers I had seen so far, there were many more.

However, I was still unwell, so had to ease off a bit.

The next instalment will include our visit to South Stack in search of Spathulate Fleawort and some amazing views.