- October 13, 2019
This was a circular walk between these first two mentioned west Kent villages to botanically record any plant I could identify followed by a trip to Styant's Bottom nearby. I found a few unusual plants as well as the common ones - as is often the case!

Bifid Hemp-Nettle is one of my favouite Summer wildflowers. Although the flowers are small, they are so intricate and beautifully coloured that they can't fail to grab my attention. They are in plain sight much of the year but without flowers they are hard to spot and even then I can't tell them apart from Common Hemp-Nettle without flowers being present. 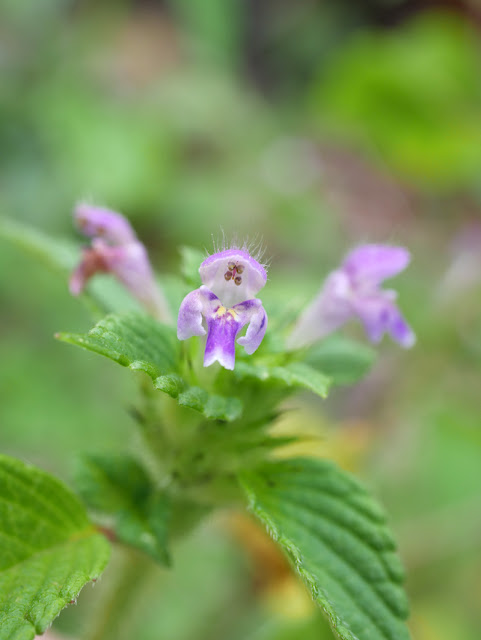 Here's the whole plant, rather than just the flowers. 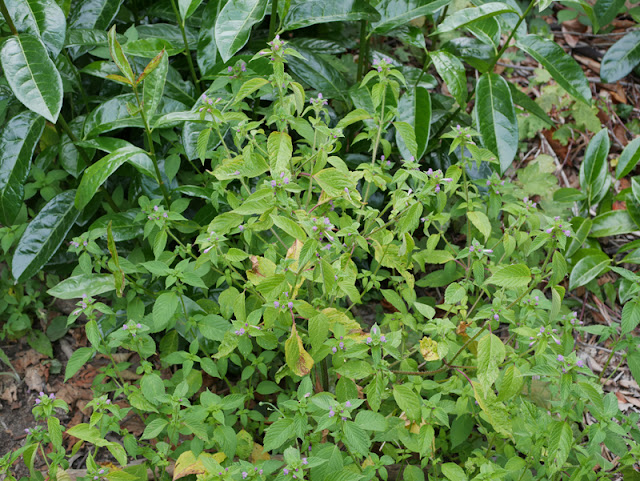 Whenever I'm close to habitation I will find garden escapes. This one is becoming a common find for me in VC16 West Kent, French Cranesbill. There is another very similar Cranesbill escapee which is a hybrid between French and Pencilled Cranesbill. Oddly, I saw plenty of these hybrids last year and none this year. This plant below was flowering on a byway not far from houses. The size of the flowers are about 3 x larger than Hedgerow Cranesbill which is one of our larger flowering native Geraniums. I found another blog via the BSBI's News and Views blog which is http://cambridgewildflowers.blogspot.com/
There are several pages here devoted to telling native Geraniums apart and is well worth a read. 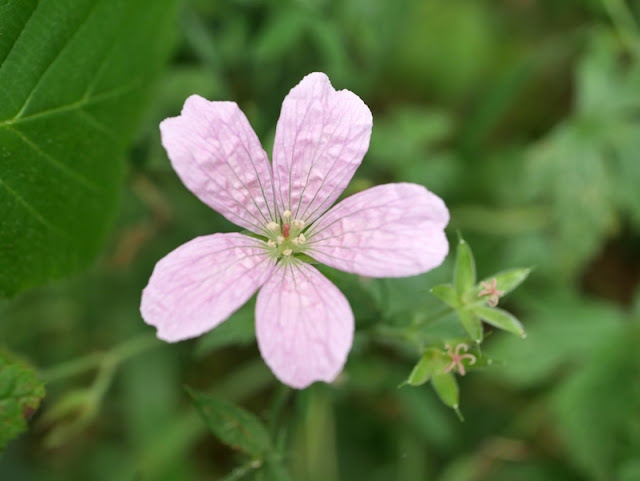 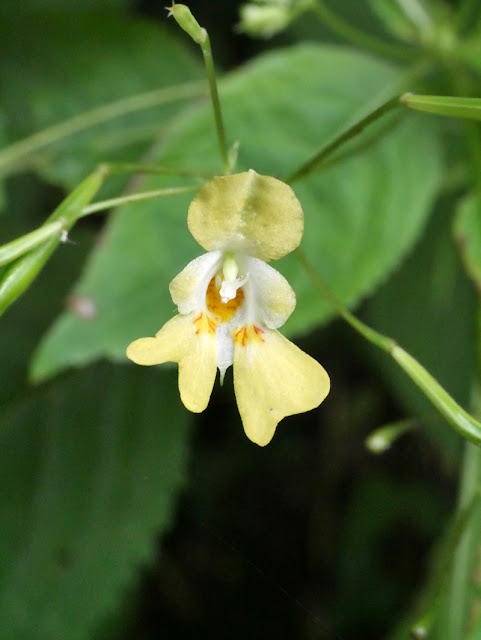 This lane had large drifts of Small Balsam along the shady areas under trees. It is a widespread alien escape in west Kent.


It's not quite as invasive as its pink flowered showy relative Impatiens glandulifera (Indian Balsam) but it still smothers large areas of woodland floor. 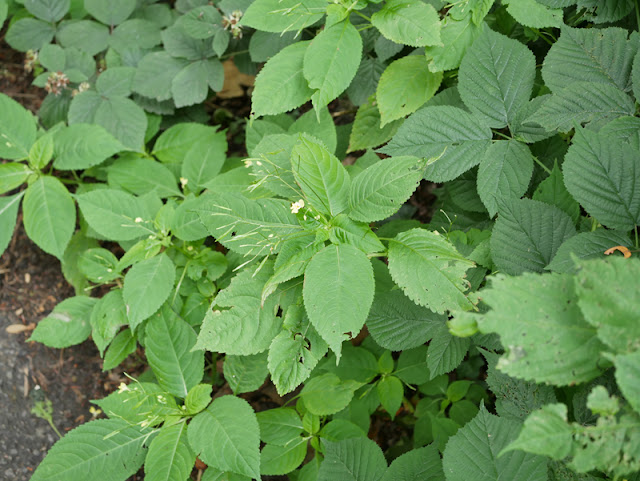 The first of the fungi had put in an appearance. Of course, fungi are with us all year round, but we only tend to notice them when they have a fruiting body (such as this shown or a toadstool for example). Fungi break down all the dead stuff (and some live things too) and recycle it for future life to use. They can also be incredibly poisonous and several are deadly, so don't eat any unless you really know what you are doing. 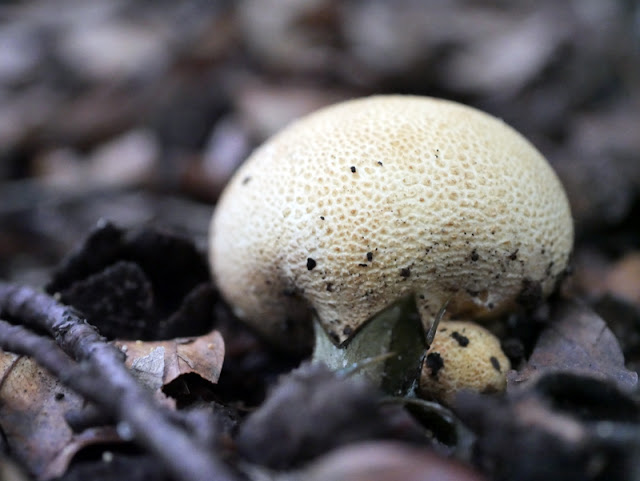 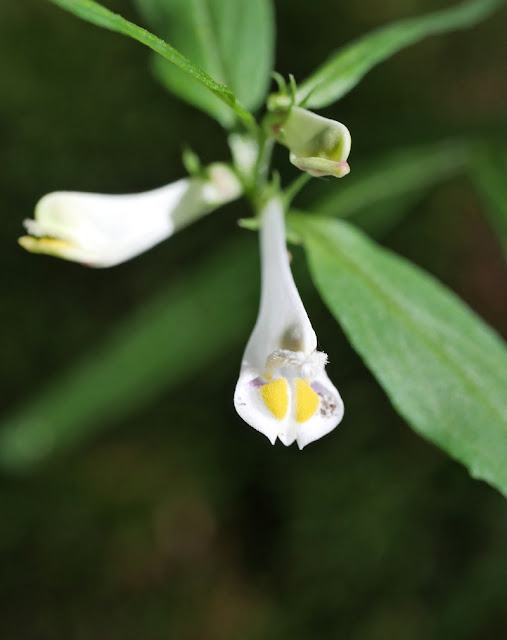 One of my star finds of the day was a few Common Cow-Wheat, a Kent RPR species. 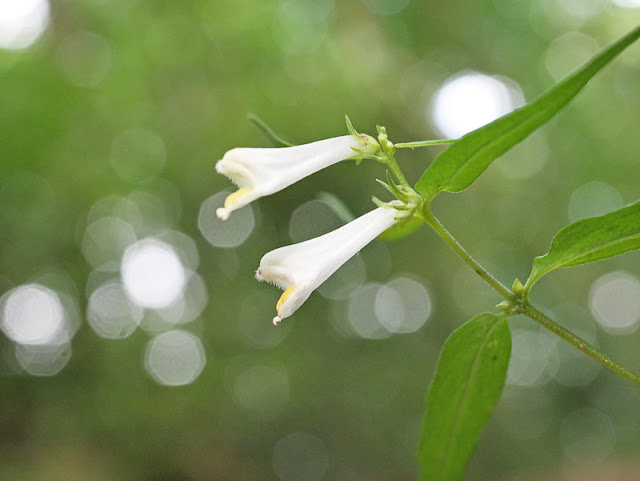 As shown below, they are quite spindly plants which grow in the shade under trees. They are parasites on woody plants and in places nearby they seem to like Bilberry (Vaccinum myrtillus) plants. You can clearly see the young Holly sapling in this photo. If a germinating Common Cow-Wheat fails to find a host they wither and die after a few weeks. 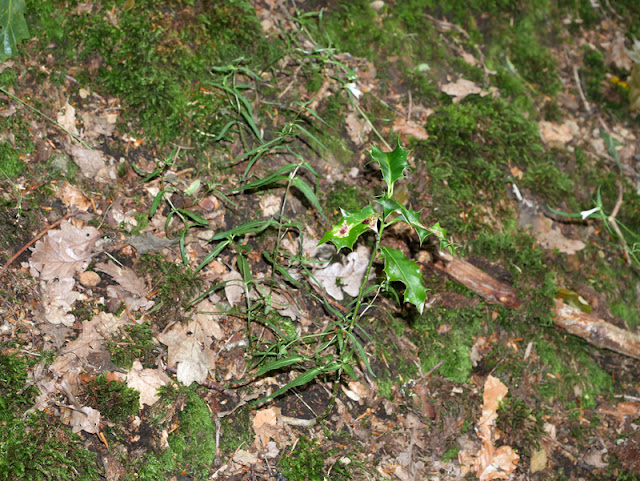 I then came across another garden escapee, but this one seemed to be a fern. It was obviously from fly tipped material and some of the old compost can still be seen in the photo. 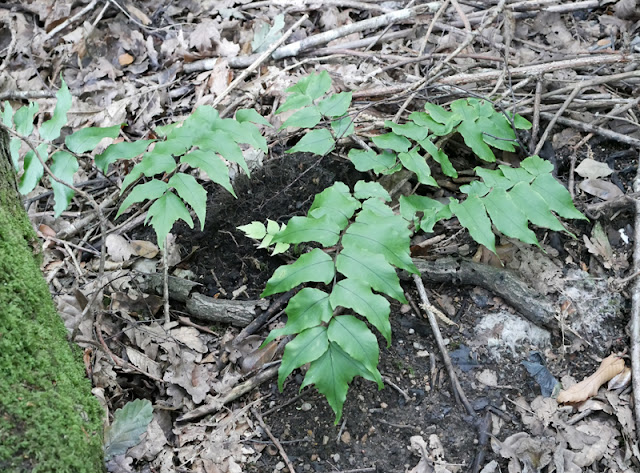 This is where social media comes into its own. People quickly told me it was a Cyrtomium, and some people suggested a couple of options within that family. That gave me the starting point to look in Stace 4 (which is one of the botanist's bibles for looking up plant IDs). The number of fronds and the spacing between them meant this could only be Cyrtomium falcatum, confirming an ID given to me by my fellow KBRG member, Lliam Rooney who handily had it growing in his garden too! I'd not found this before in the wild and it would be interesting to see if it persists and spreads. 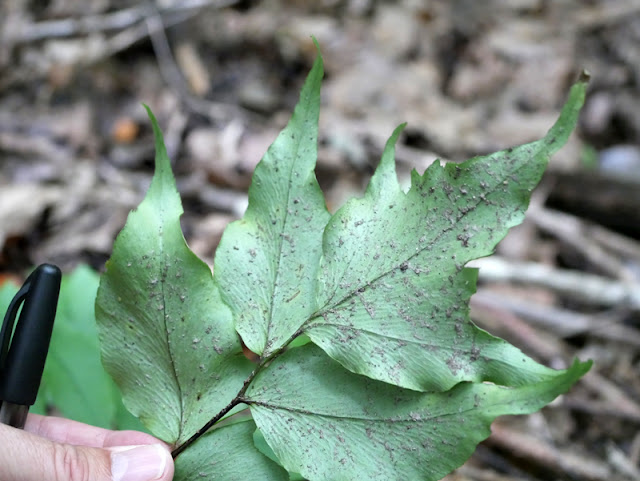 Back to some colour and I found a few Musk Mallow in flower, one of the prettier Mallows. 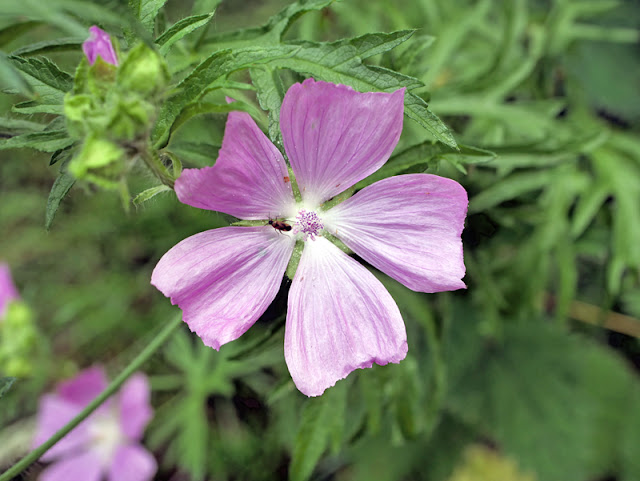 More colour, this time from another non native, but familiar plant that is found all around the UK, Fox and Cubs. It seems to do quite well in parts of west Kent yet it is absent from much of the rest of the county. 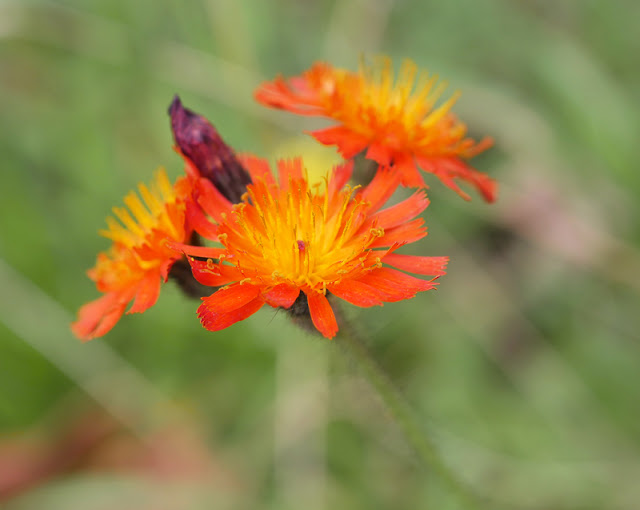 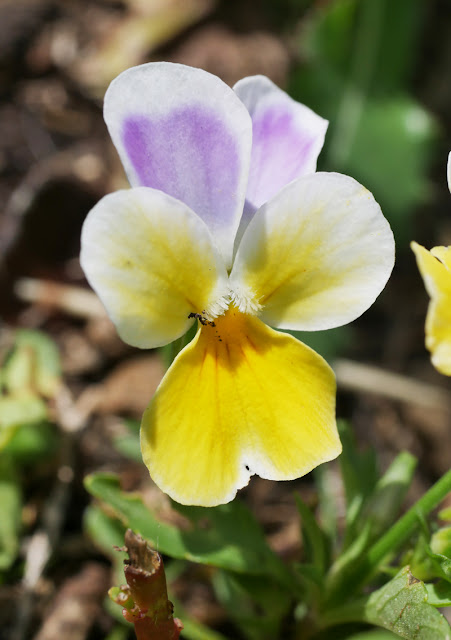 It's very rare to find Wild Pansy in Kent, it's much more common to find the garden escaped form though, and here were a few that had escaped from a nearby farmhouse garden  onto a rural footpath not far away.

Colours can and do vary but the flowers are always bigger than Wild Pansy and the top petals are large and they overlap too. I think they're very cute!


A view from Bitchet Green 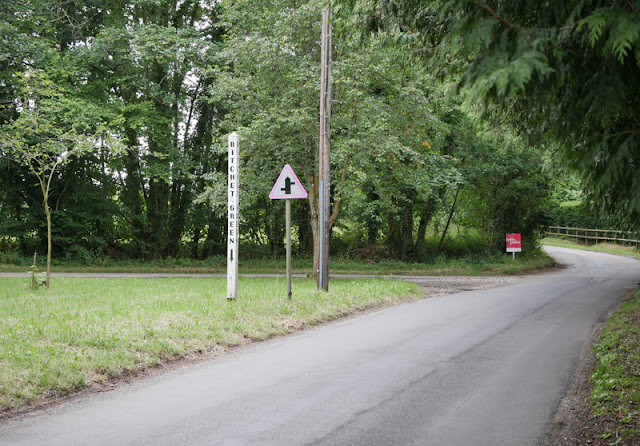 But it was my next venue that threw up the best surprise this day at Styant's Bottom near Oldbury Hill. From a distance they looked like Chickory, but the whole form and leaf arrangement looked wrong for that plant. Thus it could only be Blue Sowthistle, a rare find in Kent. 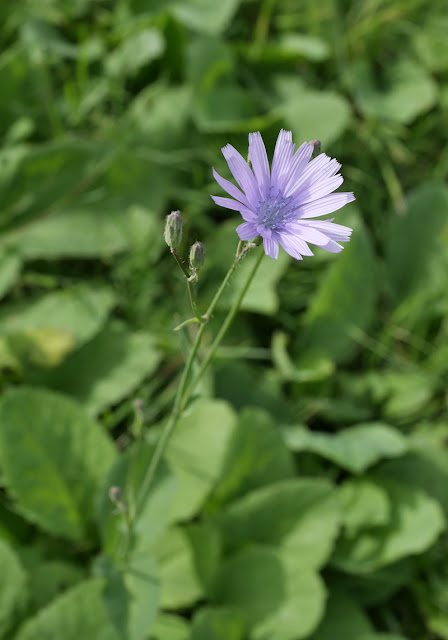 The colour of the flowers hasn't come out true in the photos, they were much more of a vivid blue. 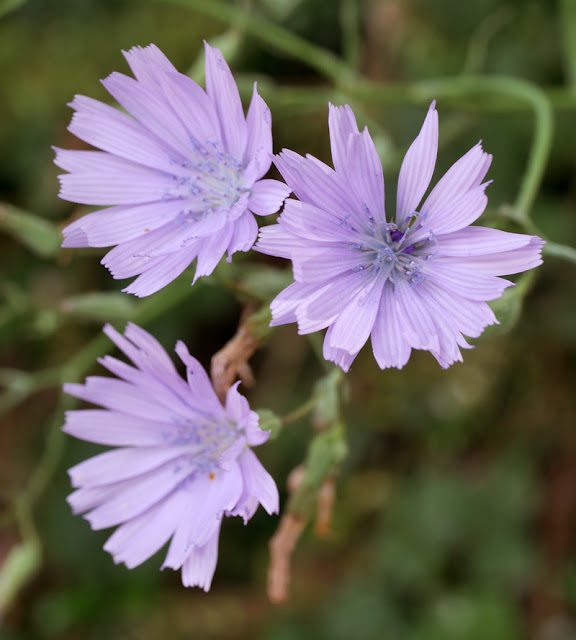 Here's a stem leaf clasping the stem and showing this to be a Sowthistle and not Chickory. 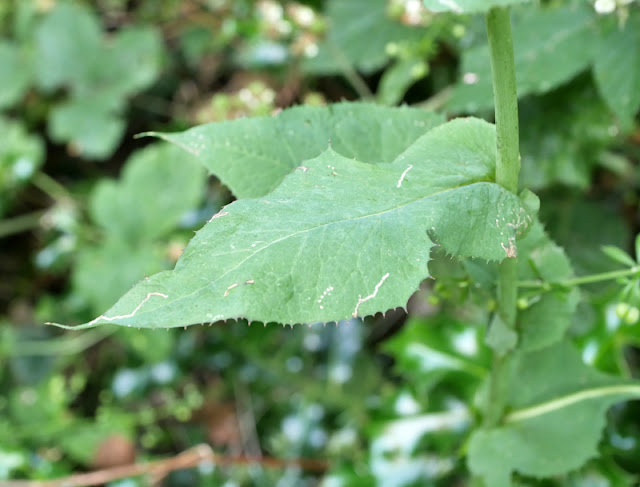 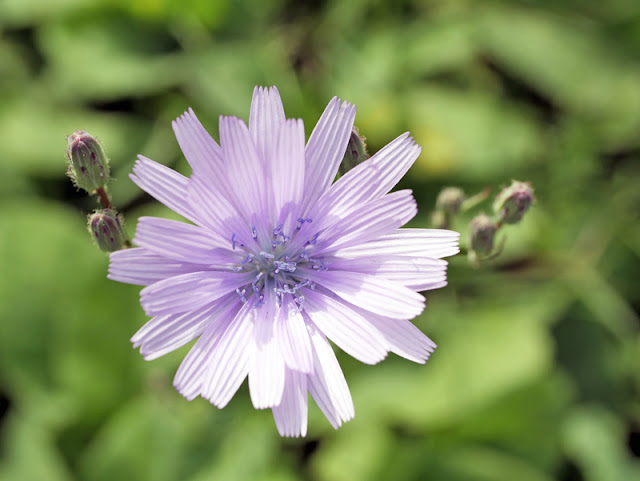 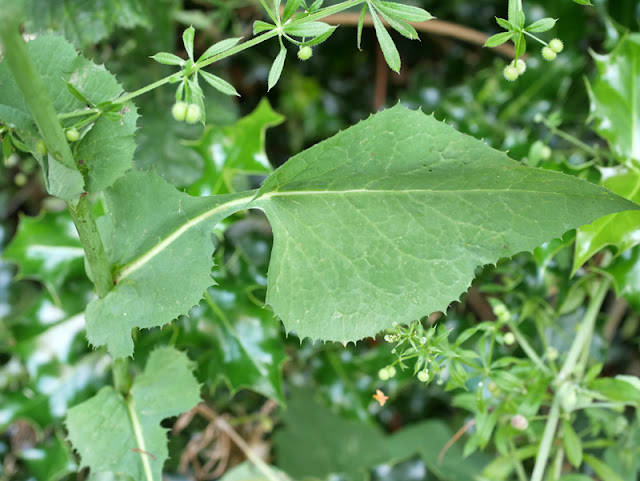 I added numerous botanical records to the several monads that I visited this day, but this last plant was the main highlight. I'd only ever seen it once before on Detling Hill on a Kent RNR on the A249 so it was great to see one again after a break of several years since my last sighting.