- October 11, 2019
Only a couple of miles from my home is an arable field on chalk that borders the railway line. As such, it was a good candidate for a large variety of plant species, so I took a walk there to see what I could find. I was pleased to see that the field had been left fallow recently and it was full of wildflowers as a result. Given the time of year, the margins along the railway line and field edges were also brimming with flowers.

This is Small Toadflax - its flowers could easily be overlooked as they are quite small, but the plant itself is usually sufficiently large enough to grab my attention as I scan the ground. 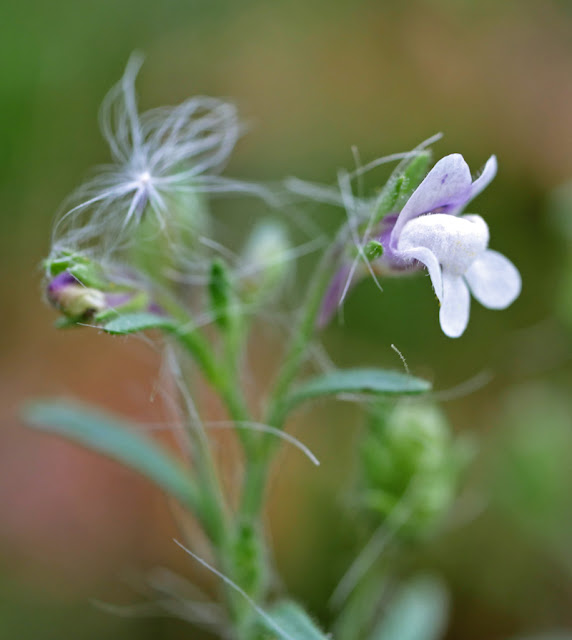 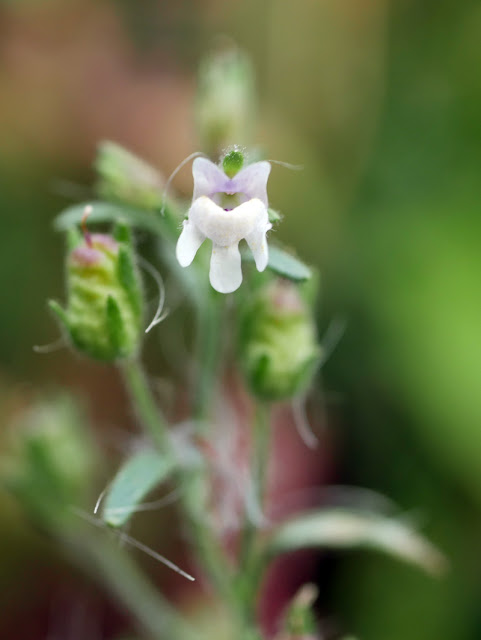 Along the railway line verge were the usual chalk wildflowers, such as this beautiful Wild Thyme.
Clinopodium vulgare 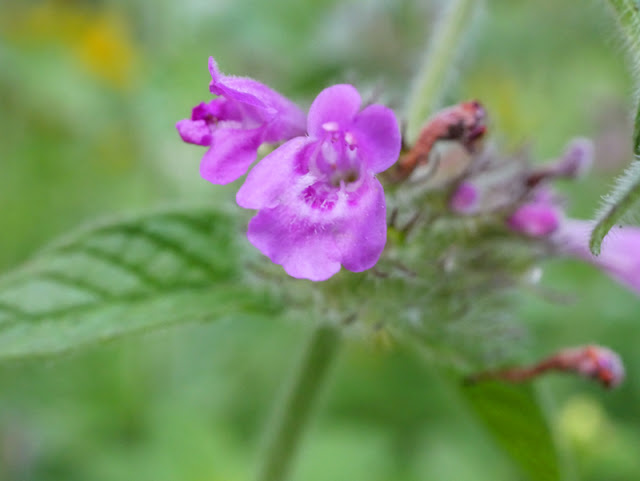 This plant grabbed my attention and I was actually looking for it too, Round-leaved Fluellen. Believe it or not it was actually in flower too, so where are the flowers? 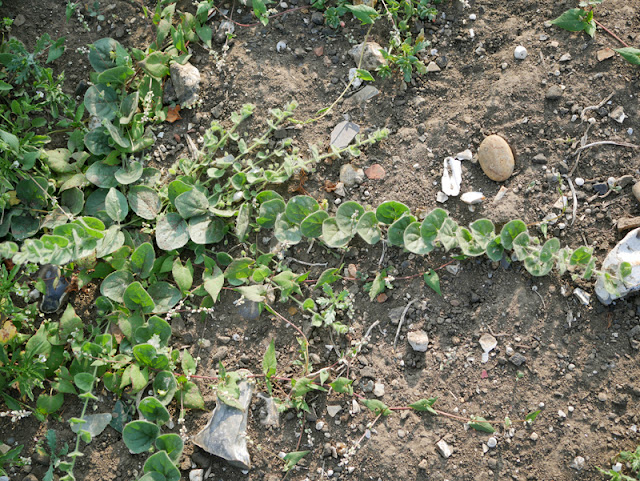 Here is a flower hiding under the leaves. They are only about 1.5cm long (at most). I never notice these flowers from a standing height, I only see the leaves first then have a look for the flowers. 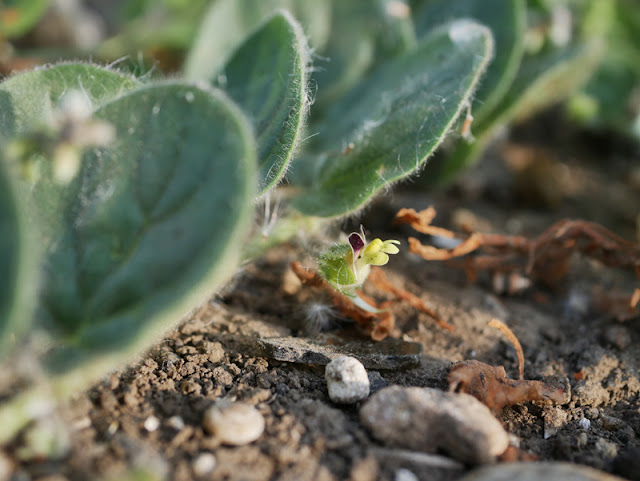 Here is a macro shot of the tiny flowers with their deep purple upper petals and bright yellow lower petals, quite beautiful! Also known as Cancerwort and was historically used to staunch wounds and no doubt used to treat other illnesses too. 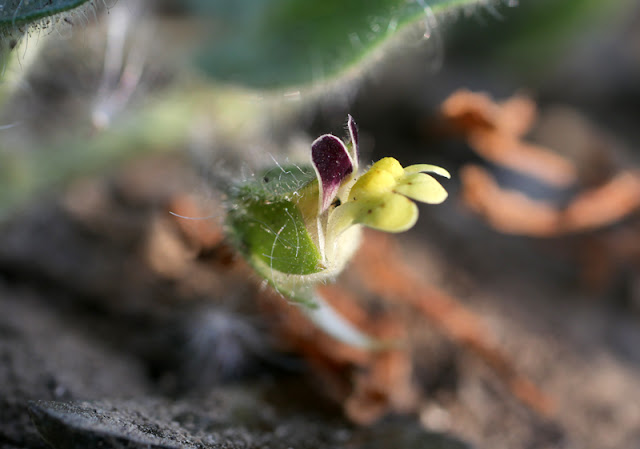 There is a close relative with similar flowers but with different leaves, called Sharp-leaved Fluellen, and I kept an eye out for those as well.

Meanwhile I found several Prickly Lettuce plants, easily told apart from Great Lettuce by their overall form; lack of purple blotching in the stems and leaf veins, and Prickly Lettuce has these on the underside of its leaves - prickly things! 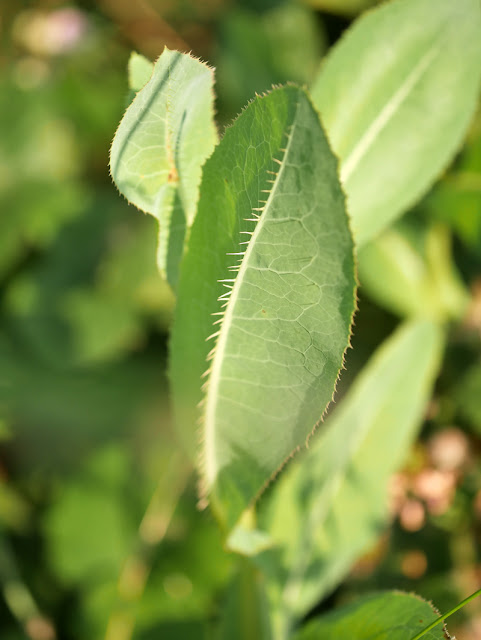 They look very sharp, but they are a bit soft so won't penetrate your skin easily if you touch them.  Its leaves also swivel throughout the day to face the sun, thus maximising the potential for photosynthesis and rapid growth. 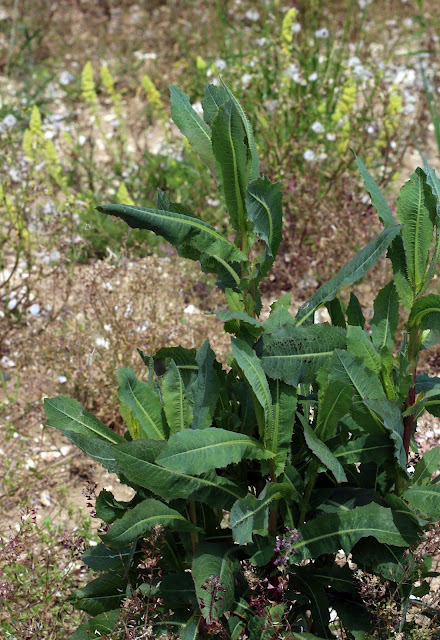 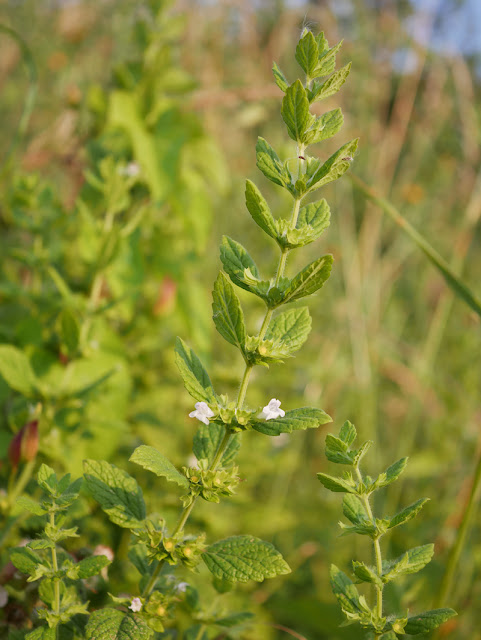 I was very surprised to find this along a field edge. A quick sniff of a bruised leaf along with the whorls of small white flowers confirmed it as Lemon Balm, a not often seen garden escape species.

There were no gardens anywhere close by, so its origins are not known. 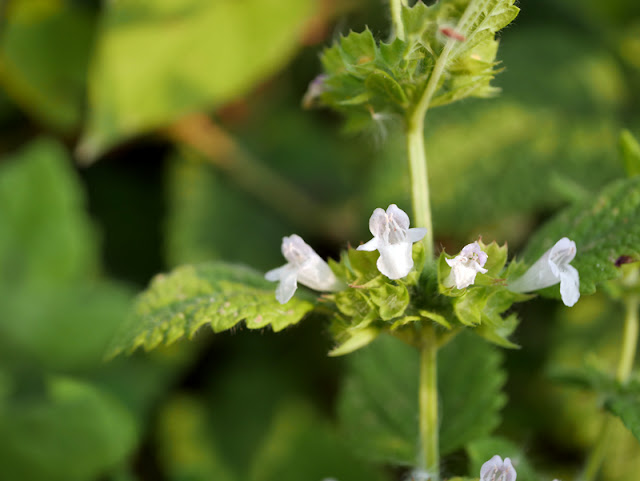 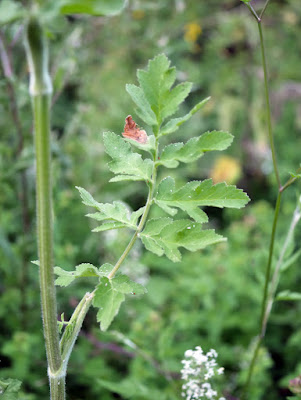 Close to the Melissa were several flowering plants of Wild Parsnip. Their tiny flowers in yellow umbels look very much like Wild Fennel, but the leaves with opposite lobed pairs can only belong to this species. Wild Fennel has very fine feathery leaves. 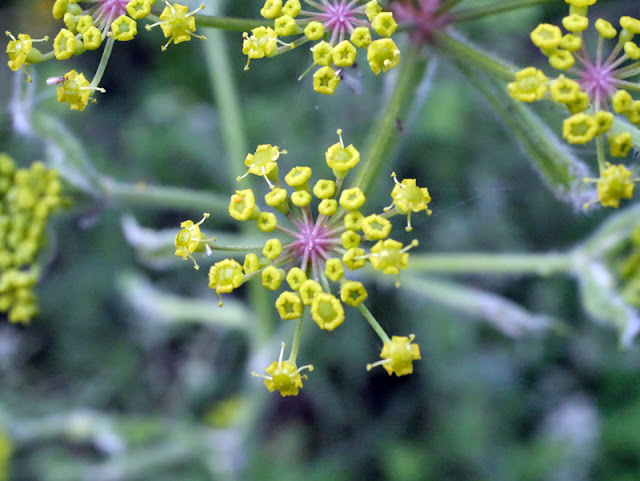 In places within the field itself were dense stands of Perennial Sow-thistles beautifully back lit by the afternoon sun. 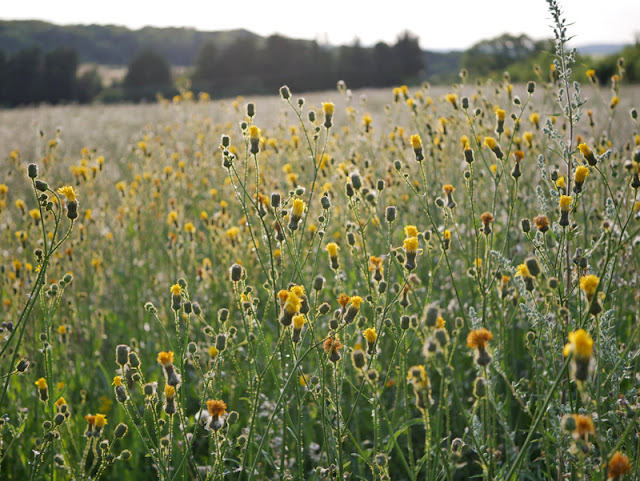 Drifts of lovely Wild Marjoram were in flower along the field edges. 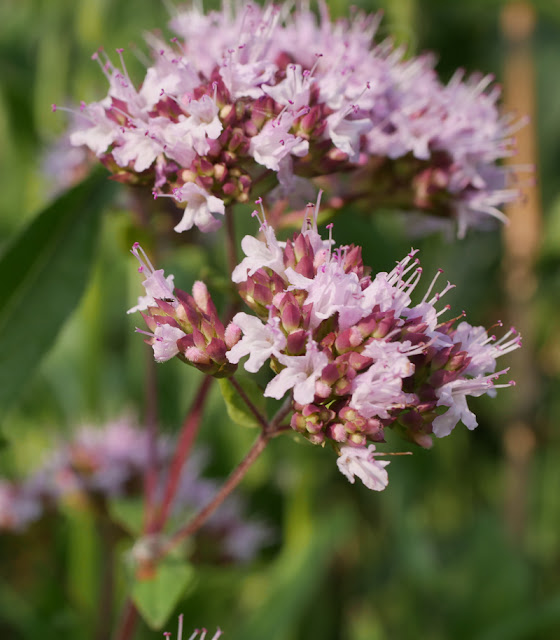 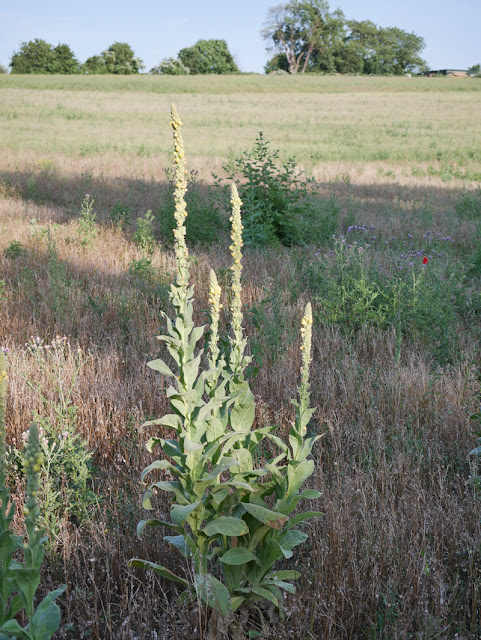 Mulleins can be tricky to identify, but Great Mullein is an easy one as the flowers are quite small and only half open and the hairs on the stigmas are all white. The plant doesn't branch much either so it won't look like a candelabra like some other species do. 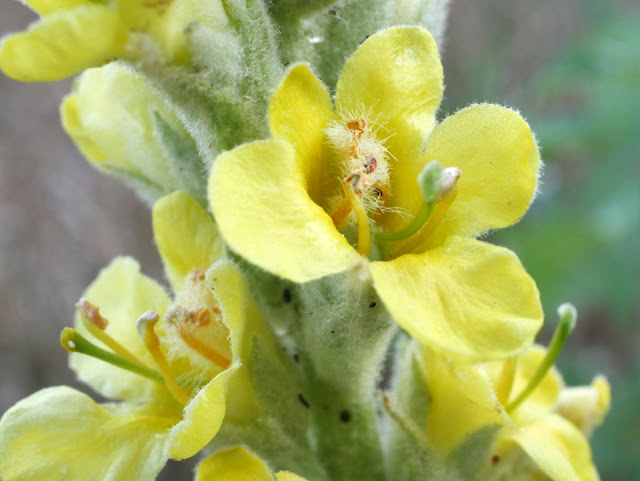 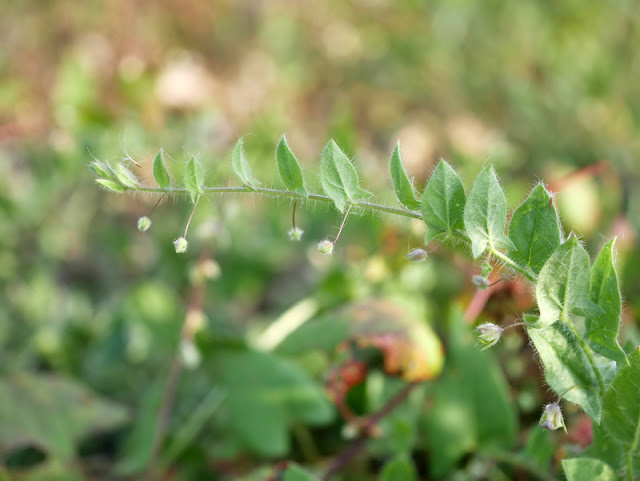 Its leaves look like little arrowheads and unlike its relative the tiny flowers can often be seen dangling from them in mid air. 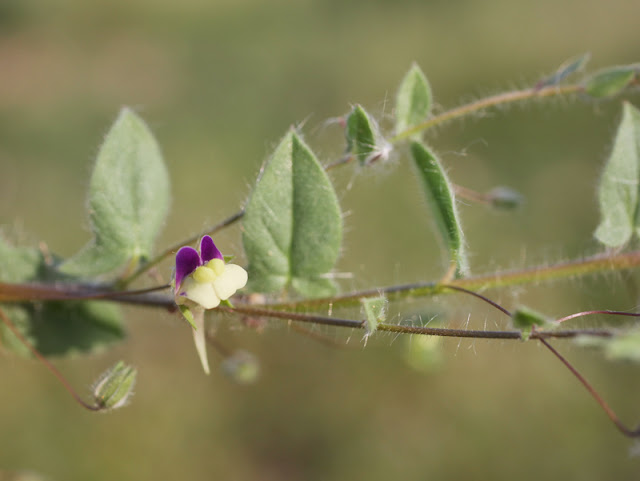 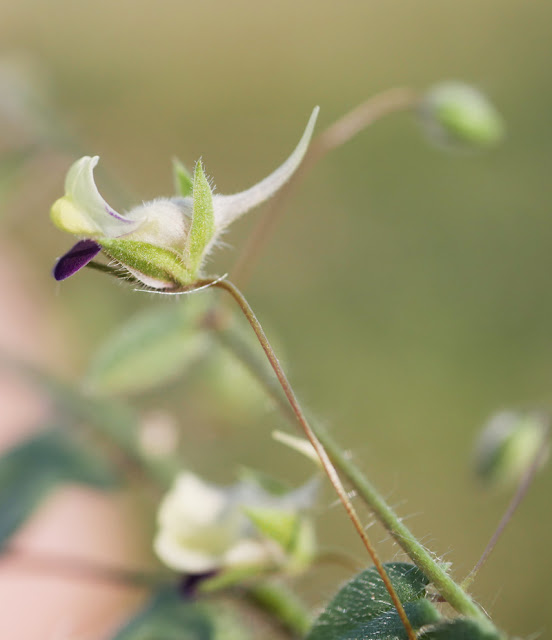 
A habitat shot of the arable field edge close to the Melissa officinalis find. 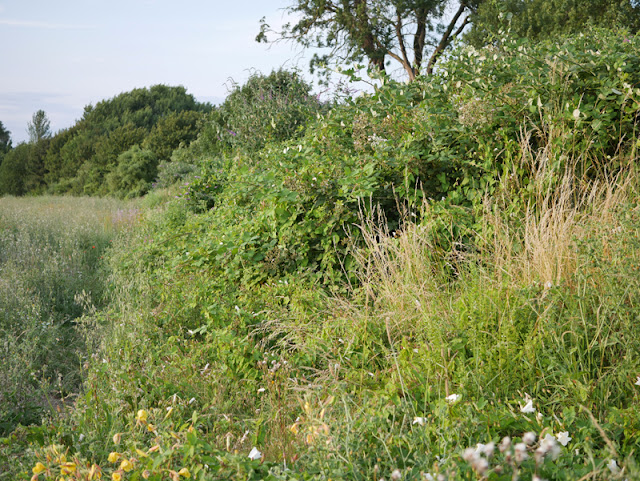 At the top of the path was another green tunnel, I do like these! 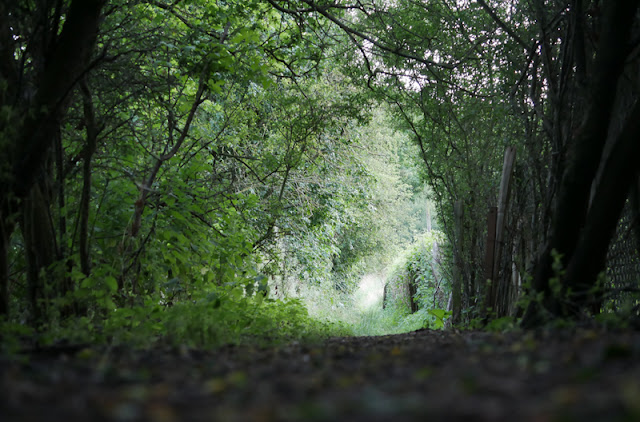 There were lots more wildflowers and arable plants to be seen here, I've only shown a small selection, but don't assume that every field is sprayed with herbicides to the edges, they aren't. There are some surprises out there, so go and find some!