- April 19, 2017
After the wonderful surprise the day before of finding four orchid species in flower including Lady, Fly, Common Twayblade and Early Purple Orchid (plus a variant), we set off to Samphire Hoe for a change of venue and somewhere nice by the sea for a walk.
I didn't think there would be any Early Spider Orchids out yet. Many people had been studiously looking for them for the past few weeks and I hadn't seen any reported in flower yet.
However, Samphire Hoe is a wildlife haven with plenty of other things to see, so finding an orchid wasn't the main purpose of the trip.

There are always Stonechats here, a lovely little bird that sings it heart out. 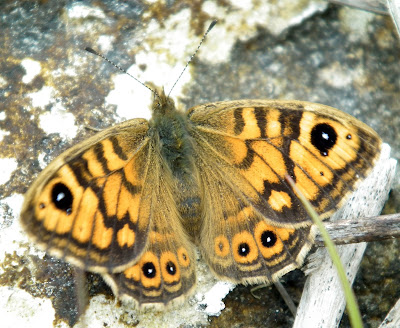 It's a great place for butterflies as well. Several Wall butterflies were seen (again photo is from last year) but proved elusive and they didn't settle long anywhere.

Several of the Whites, a Red Admiral and what looked like a Small Blue were also seen.

Being in sight of France, you never know what butterfly (or Moth) might turn up there. 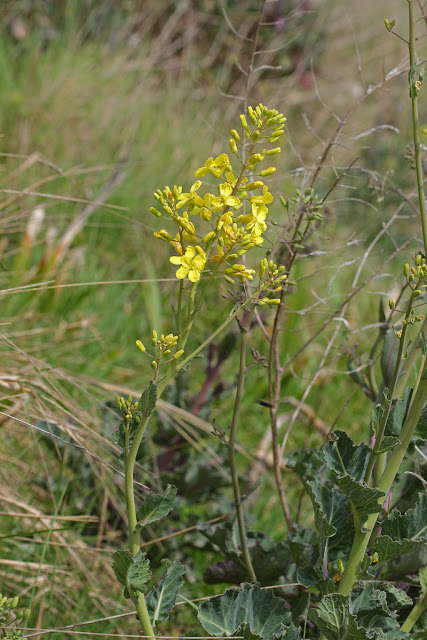 The first and most obvious plant in flower now is the Wild Cabbage. It's a tall, striking plant with loose racemes of bright yellow flowers.

Some can confuse it with Rape which the farmers grow in their millions around the county at present, but they have tighter flowers and different leaves. Think of Spring Greens that you buy in the shops, the leaves are similar to those but pale green.

Older plants can have very woody purple stems as well.
Due to habitat destruction, this species is now declining rapidly and is on the Kent Rare Plant Register. 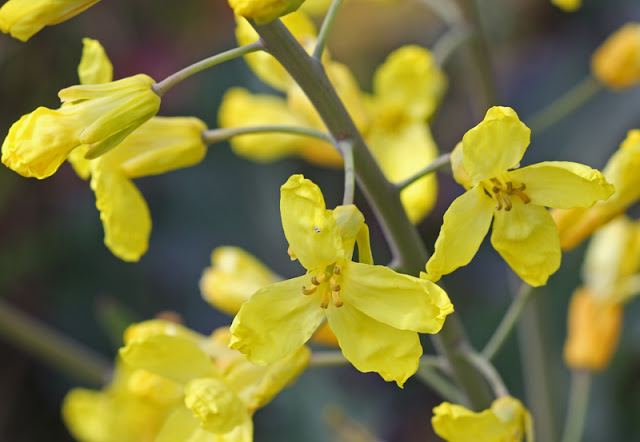 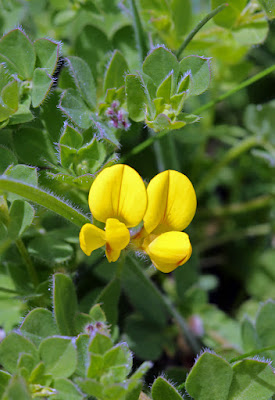 The first Birdsfoot Trefoil of the year were starting to flower here. When in bud, they often look red/orange with some flowers also being orange. In the main though, they are bright yellow with a tiny red stripe up the centre upper petal.

There were hundreds of tiny blue flowers in the grasses which turned out to be these Common Milkwort. I usually check for a basal rosette to see if they are one of the rarer Milkworts, but haven't found any here to date. These are not fully open flowers yet, though some were. 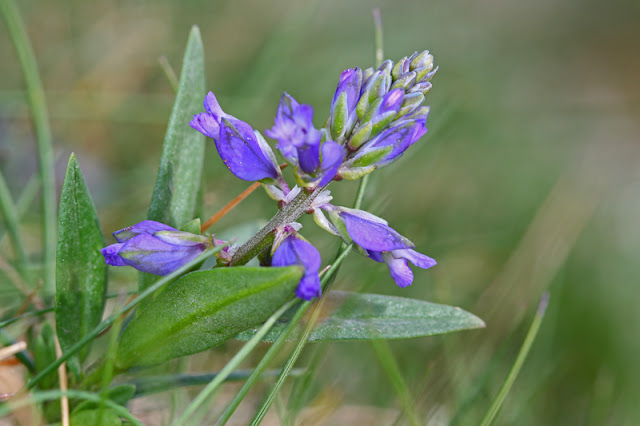 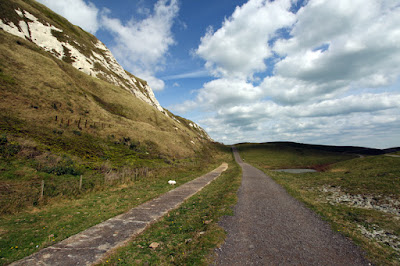 It's common knowledge that the best place to look for the Early Spider Orchids is along the path by the railway line. It also happens to be the best path for other wildflowers, insects and adders! 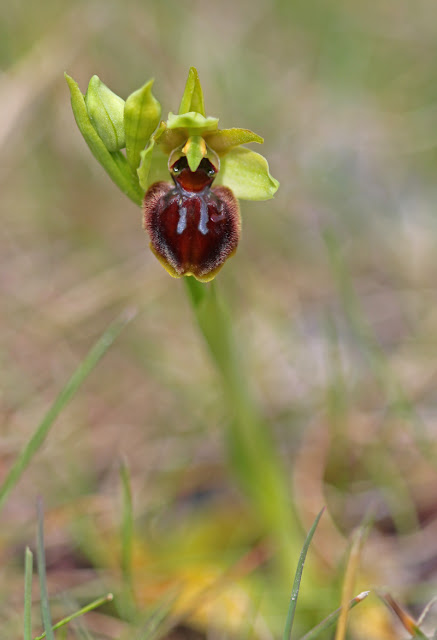 We walked quite a way down this path before we spotted our first Early Spider Orchid in flower.

I last visited here at the end of their flowering season and they were quite large with multiple flowers on. As such, I was surprised to find those out were mostly less than 6" tall!

However, once we realised how small they were at the moment, we saw over 20 in flower. 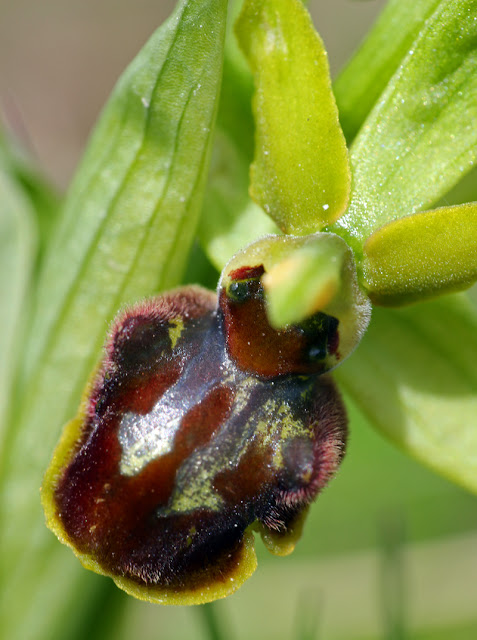 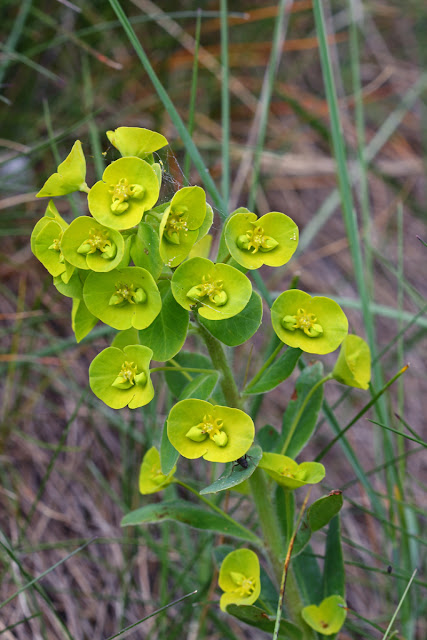 Wood Spurge was numerous with their pale green distinctive flowers. It's odd seeing these populating cliffs rather than under a beechwood with Bluebells and Celandines! 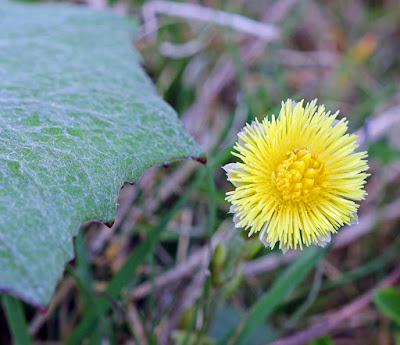 Coltsfoot has gone to seed almost everywhere. Once this happens the leaves grow and grow large!

However, I found this one and a few more flowers, together with the leaves, which is quite unusual.

They are a great coloniser of waste or disturbed ground so do well on the poor soils and cliff fall spoil heaps here.

Wayfaring Trees, which are really large shrubs mostly, were also coming into flower. Mainly found on chalk, they are a common sight all along the North downs in Kent. Once pollinated it produces a beautiful display of fruits in fantastic shades of red. 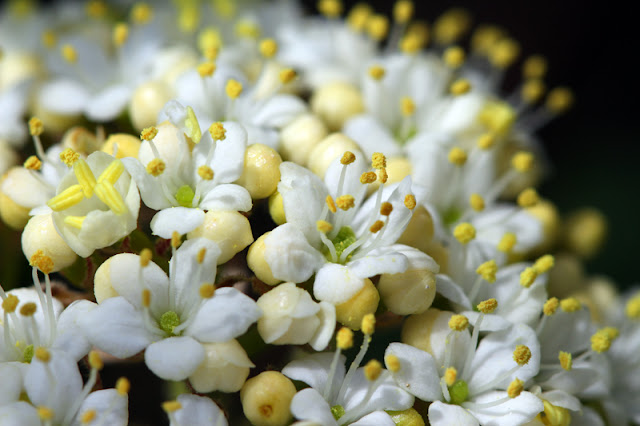 When the man made area of the Hoe ends, there is a fantastic beach backed by magnificent chalk white cliffs. There are all sorts of wildlife and wildflowers here and I spotted several Early Spider Orchids about to flower on the slopes, but none actually flowering now. 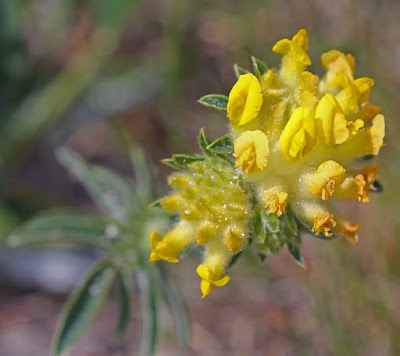 The last plant I saw here of note was Kidney Vetch, very easy to identify due to the cotton wool like substance between the flowers and the long slightly wavy pointy leaves. 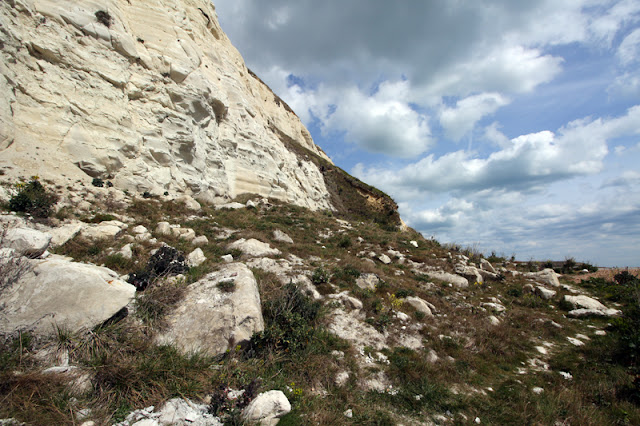 It was very busy here with people making the most of their Bank Holiday so we made our way back along the same route we came. 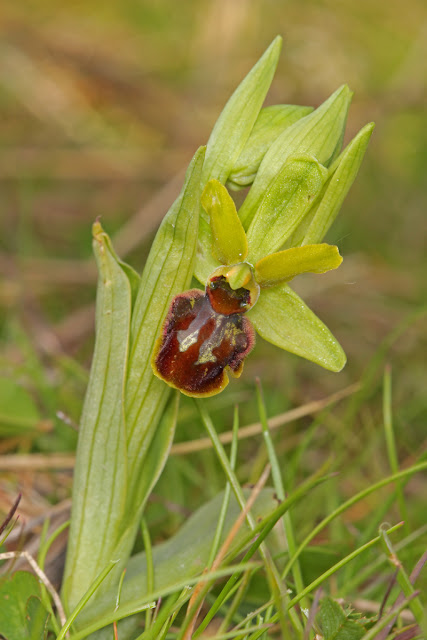 Now that we knew how small the Early Spider Orchids were here, we spotted several more on the way back.

They look great now, but in a couple of weeks they will look much better, with some having 4 or more flowers on the flowering spike.


I thought that would be about it, but my partner spotted a variant that looks like a gone over flower! 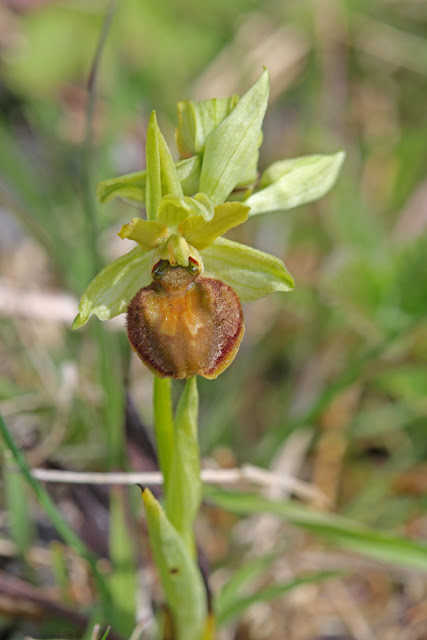 
It lacks most of the anthocyanin that gives it colour. Many plants throw up such forms.

However, it was very nice to see and relatively easy to find. Once all the orchids come out there may be a thousand to look at to find a variant! I only had 20 or so to look at today. 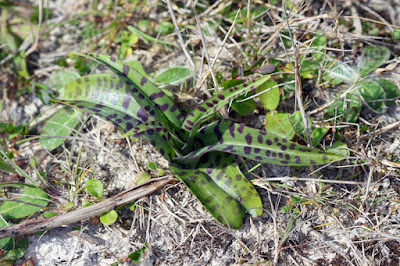 The final thing of interest was this orchid rosette in the overflow car park, of which there were several.

I'm unsure how to tell apart the rosettes of Early Purple and Common Spotted Orchids, but the thicker, fleshier rosette here makes me lean towards it being an Early Purple Orchid.

We then left here and headed up the coast to explore, though the afternoon was now getting on a bit.
At Kingsdown beach I found some Common Cornsalad on the shingle, though I usually find it on arable field edges and sometimes pavements! 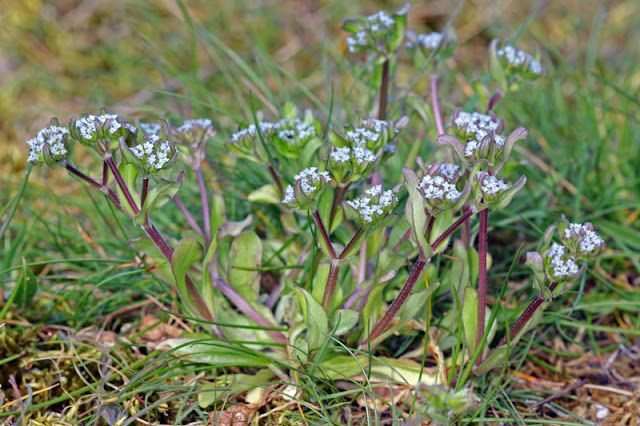 After dinner in Deal we drove up to the Sandwich dunes. Last year I had found some Green Winged Orchids here and I had heard of them being in flower in Dorset and a few at Scotney Castle, so I was optimistic in finding some.

On arrival, it was pretty barren. The ground was parched and crackly underfoot it was so dry. Hardly anything was flowering apart from numerous dovesfoot Cranesbills. There was no sign of the rare Broomrapes found here and the Lizard Orchid rosettes were looking tatty. Let's hope for some rain soon.

So I was rather pessimistic on finding the Green- Winged Orchids in flower. There were none in the first location I tried, where I had seen them last year, so I went to the second area on a public footpath through a golf course. This was also very dry, more like late Summer than Spring. However, I spotted a glimpse of purple in the dry grass and found a single flowering orchid. 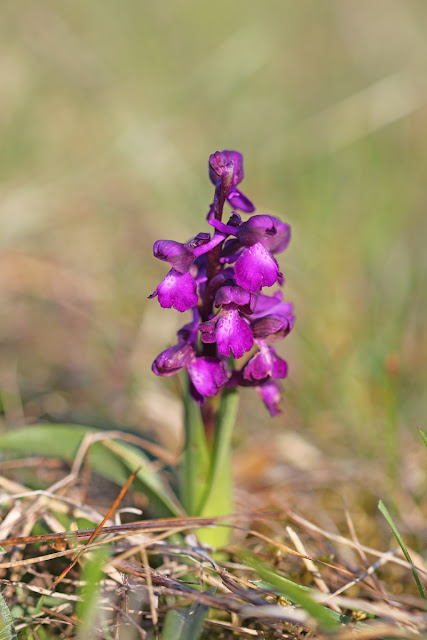 It was a little stunner as well, only about 6" tall but nearly all of its florets were open. I them spotted several others nearby but none had any open flowers and most were under 3" tall!

Whether they develop and flower will likely depend on whether we get any rain. There's none forecast for the next week and a half! 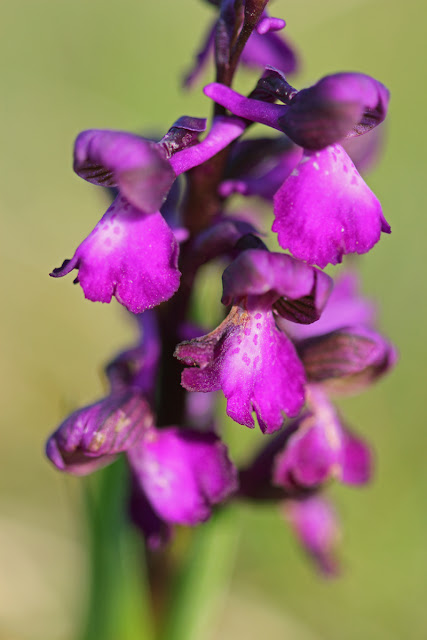 Here's a close up, though at such short distances, I lost depth of field. however, you can still see the green lines/veins on the sepals that give it its name and easily marks it from any Early Purple Orchids that may be nearby.


I was very happy with my wildlife discoveries of the Bank Holiday weekend and very suprised to find a total of eight orchid species (including variants) in 2 days when I expected to find just one!


It just goes to show that it's always worth going out for a look to see what you can find. You might not find what you went out for, but you will find something interesting, every time!