A walk from the East of Herne Bay towards Bishopstone along the cliffs and coastal area with nice views East towards Reculver (shown) and West back to the town of Herne Bay. 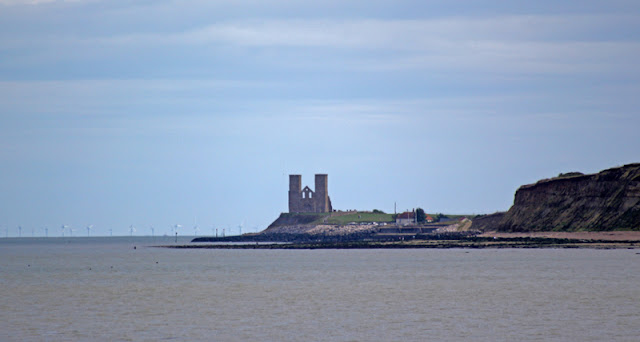 This beautiful flower below was rather out of place as it was growing in a crack in the sea wall/kerb of the main road in Herne Bay.

It's a Pot Marigold, escaped from nearby gardens no doubt. I've seen these in a few locations in the wild now. 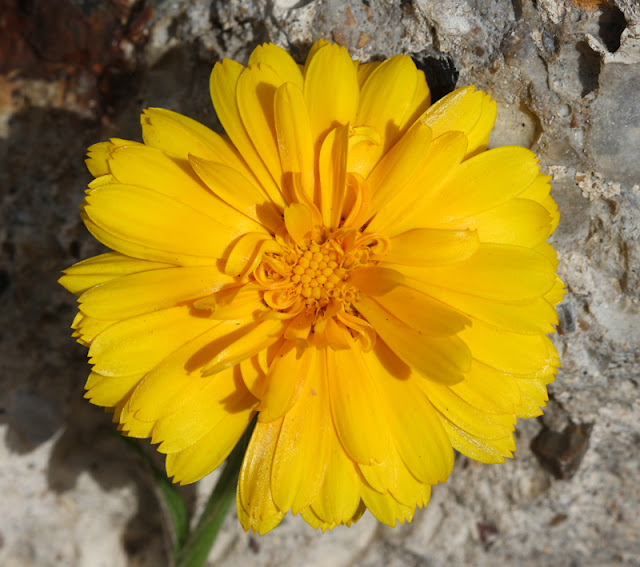 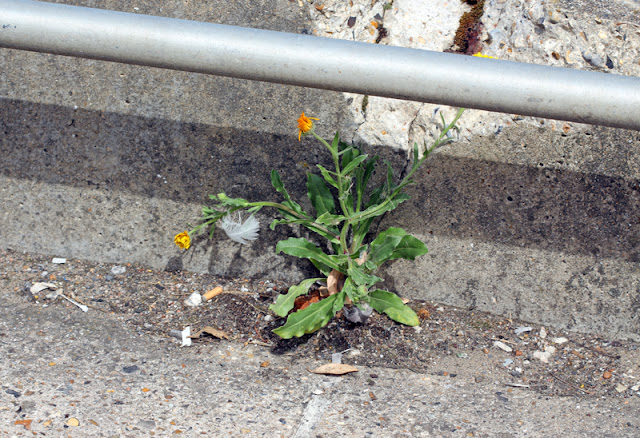 Another garden escape, but this time sprawling across wild cliff faces, the Broad-leaved Everlasting Pea. It's bright colours make it an obvious choice for gardens. Being a sprawling plant rather than a smothering one, it doesn't seem to impact other species over much. 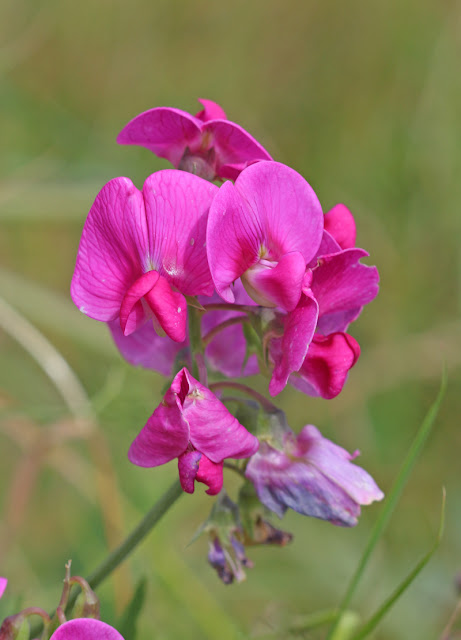 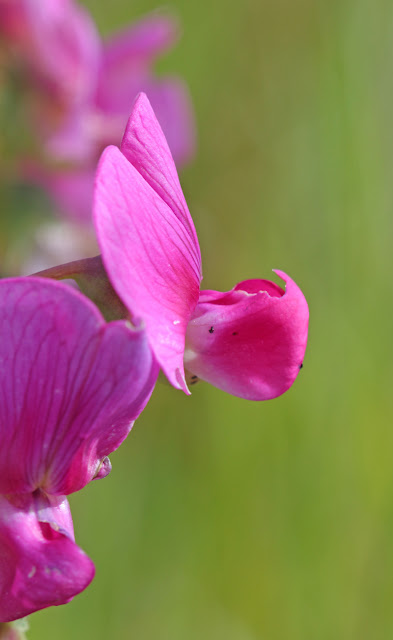 Up until this day, I thought these were Canadian Goldenrod, another garden escape species. However, a friendly guide on Twitter corrected me as the leaves weren't hairy, that it is actually Early Goldenrod (another alien). This often grows bigger than Canadian Goldenrod as can be seen by its scientific name.
Since this time, I've seen this in several wild places, and suspect it is the more common species in the wild than Canadian Goldenrod in Kent. 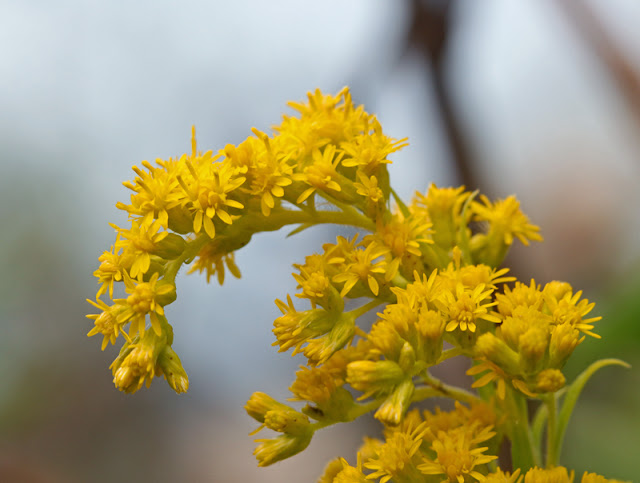 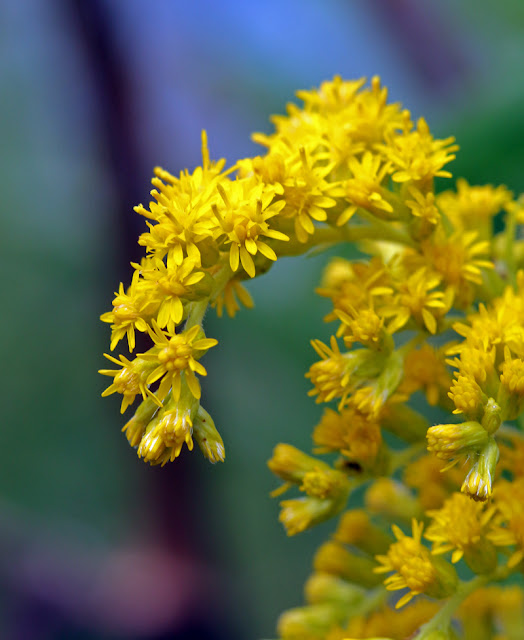 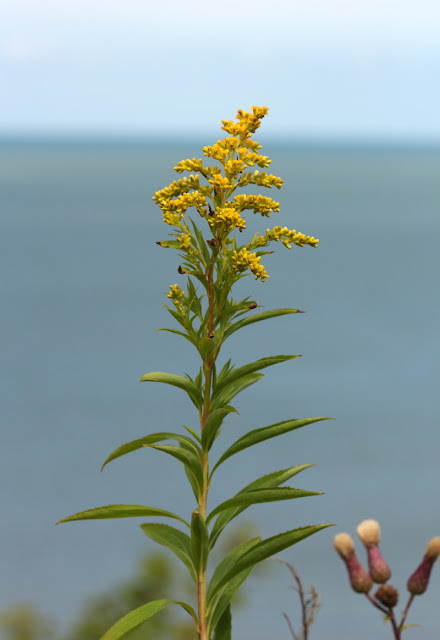 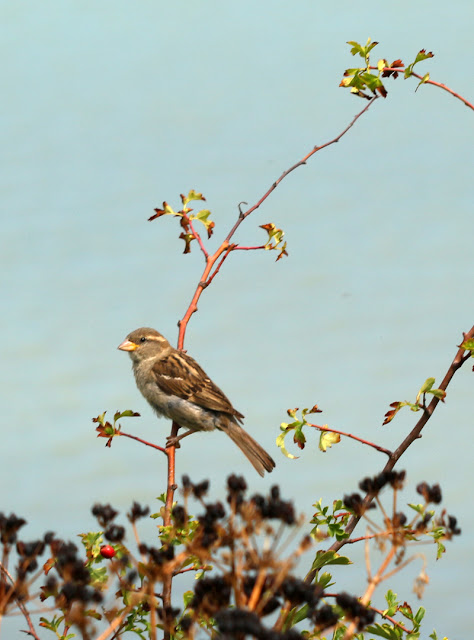 It was nice to see House sparrows in the wild, they have been in serious decline for some time now.

In the second photo there's a male bird hiding in the bush as well. 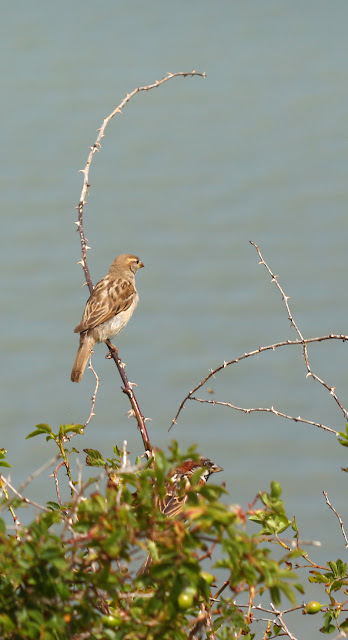 Yarrow is a very common plant, found on verges, in lawns, arable field edges and waste ground. I don't normally photograph it, but 99.9% of them have white flowers. Very rarely, I see them with deep pink flowers as here, positively demanding I photograph them! 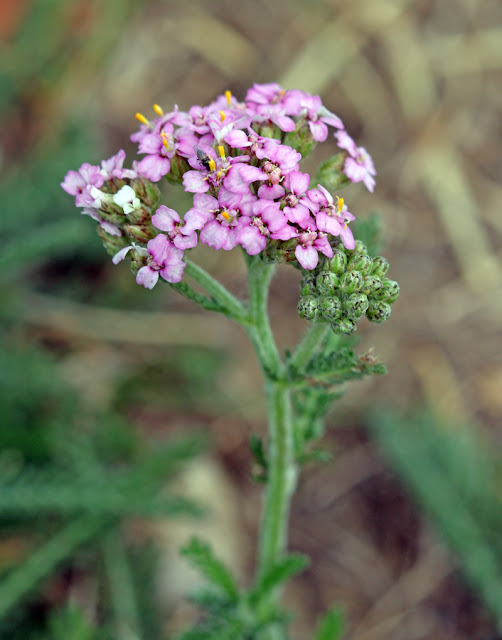 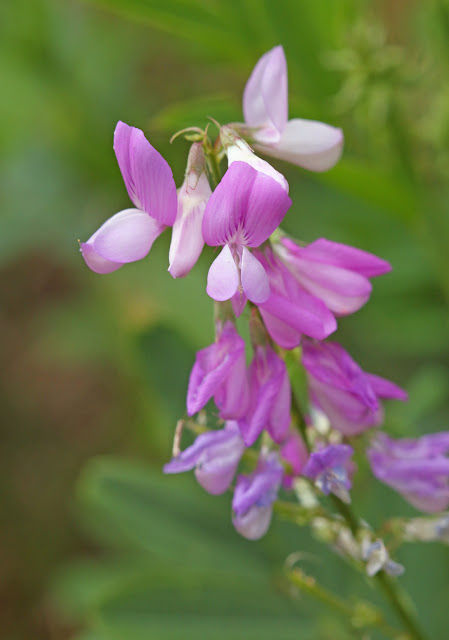 Goat's Rue is very common on roadside verges in North Kent. I think they were added to seed mixes to seed new road verges in thee not too far distant past.

It is not that common elswhere, so I was surprised to find some on the slopes of the cliffs, well away from possible seeding or introduction from man.

Walking on, but at the base of the cliffs, were huundreds of the rare Spiny Restharrow, a Kent Rare Plant Register species.  These have vicious spines, are upright, sometimes tall, only have 2 lines of hairs on the stem and slightly different leaves to Common Restharrow. 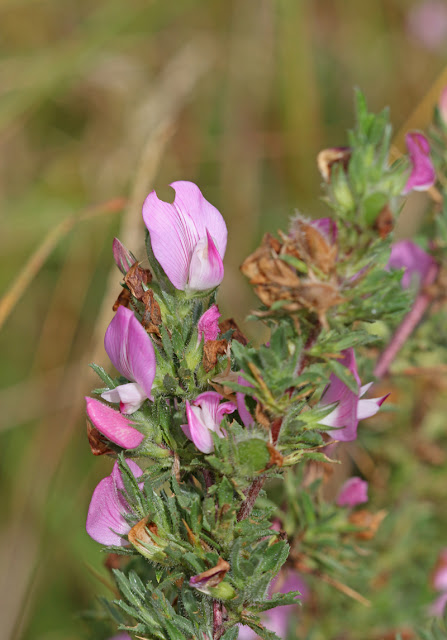 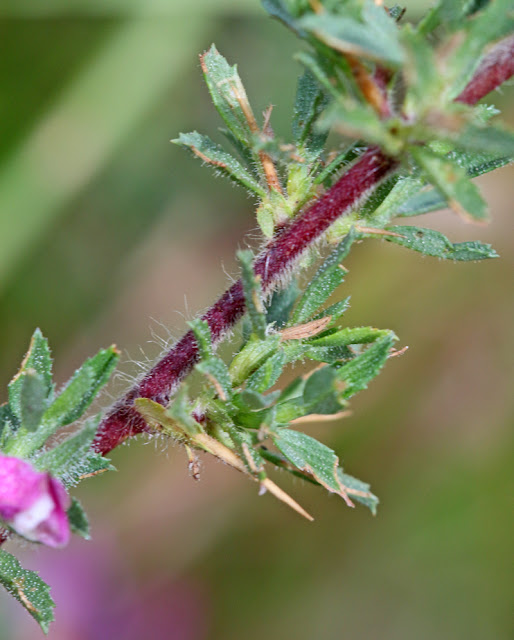 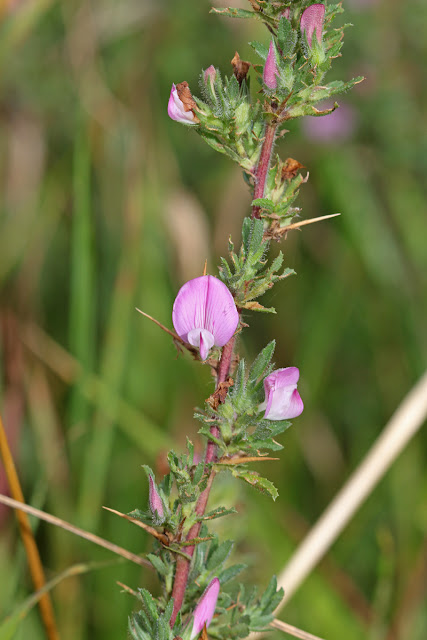 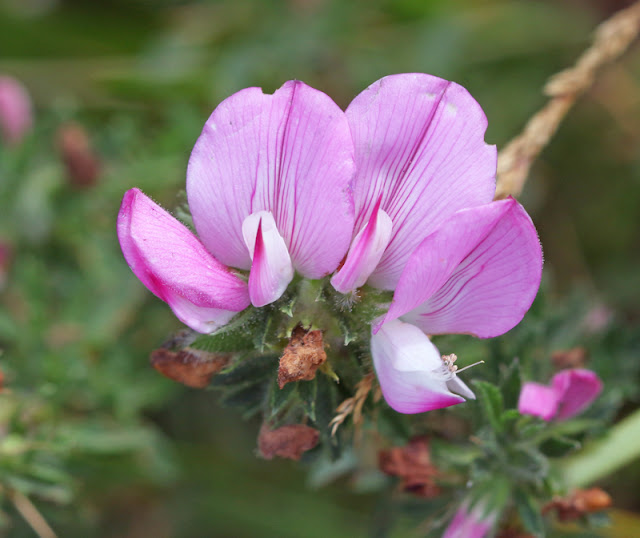 Another fine view looking East along the cliff path. 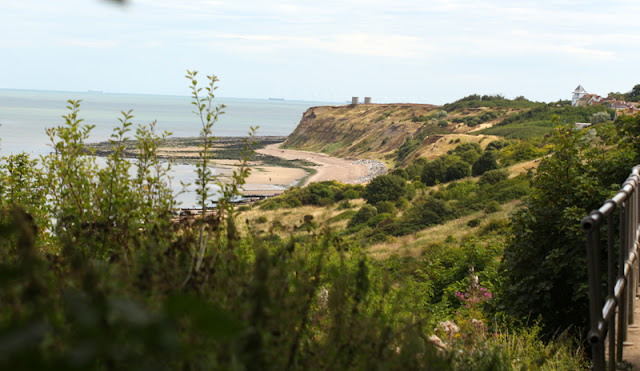 We left the cliff path for a while onto a residential road with grass verges. I was pleasantly surprised to find these rare Strawberry Clovers growing there. 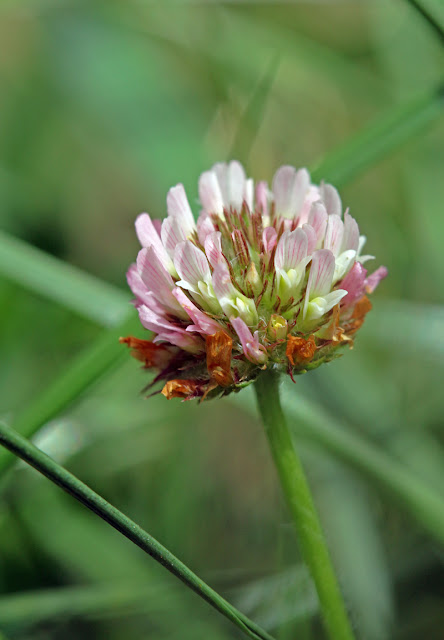 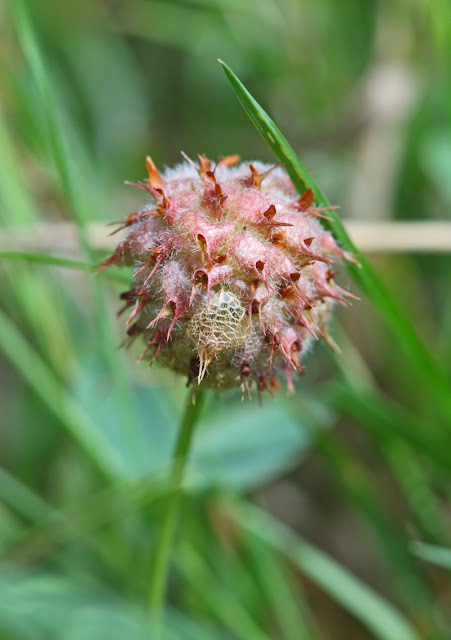 The final plant was quite astounding. It's colours were shades of metallic blue, the like I'd not seen before.  This plant can be all sorts of colours from white to pink to blue or purple. It can easily be confused with Lucerne which it strongly resembles but it's a different sub species, Sand Lucerne. 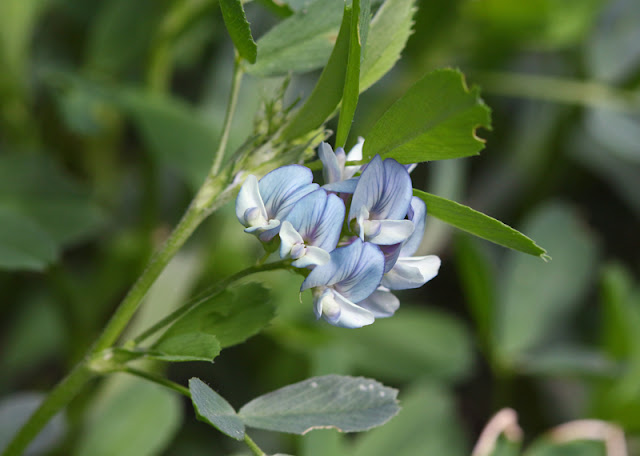 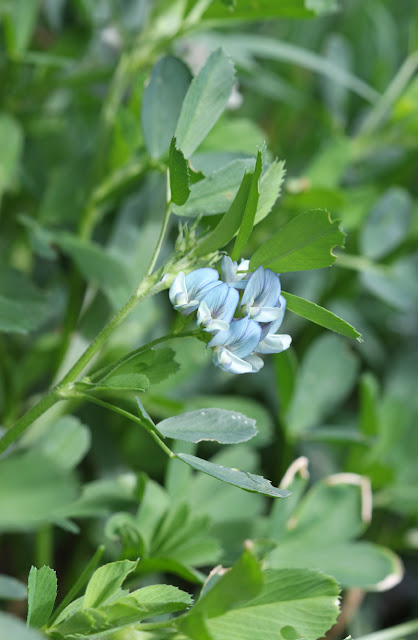 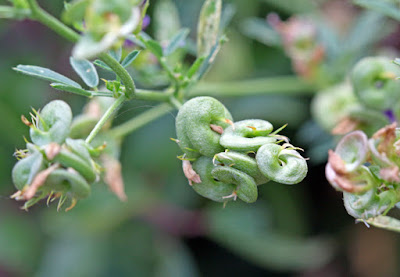 These are its seeds and easily tell it apart from Lucerne which has upto 4 spirals of seeds. Sand Lucerne (shown) has 1 to 1.5 spirals). I've since found many Sand Lucerne in Kent, though none as beautifully coloured, and the seeds make identification very easy.

Of course, any Lucerne in a colour other than a shade of purple is most likely Sand Lucerne.

So ended another lovely day in the Kent countryside. Coastal areas always have something of interest and something new to see, go visit your coasts and see what you can find. 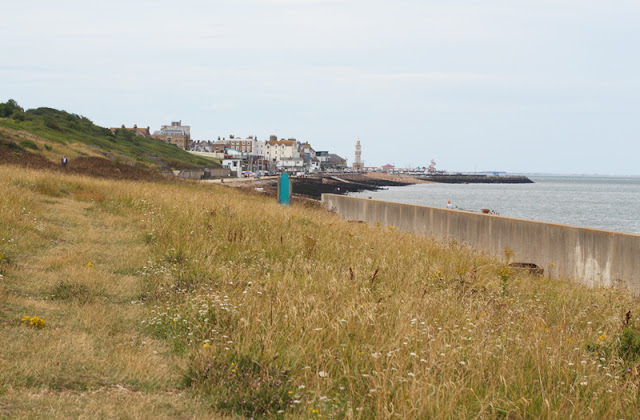